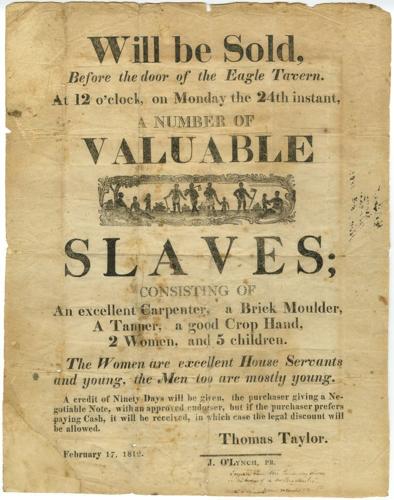 Items on display include an 1812 ad for the sale of “an excellent carpenter, a brick moulder, a tanner, a good crop hand, 2 women and 5 children.” ﻿ 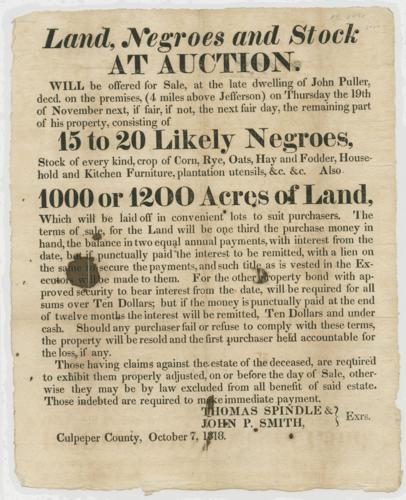 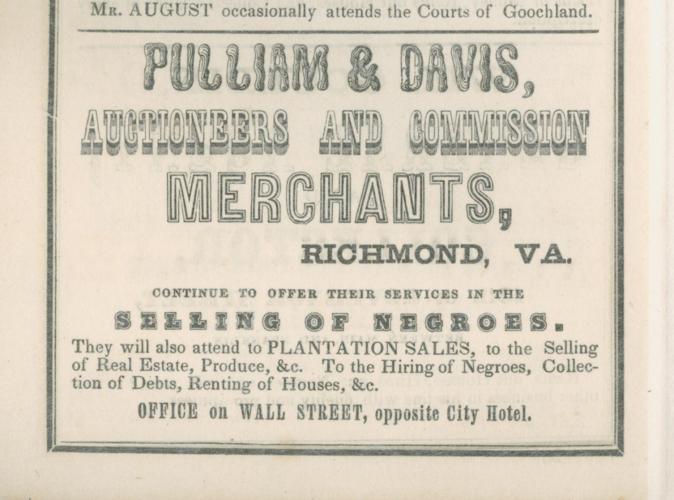 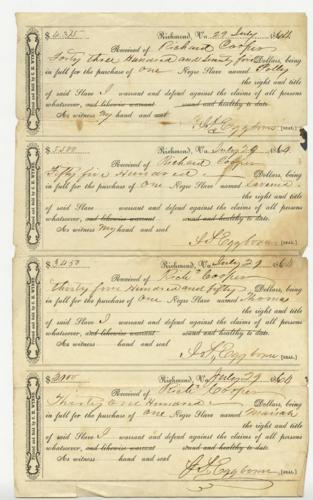 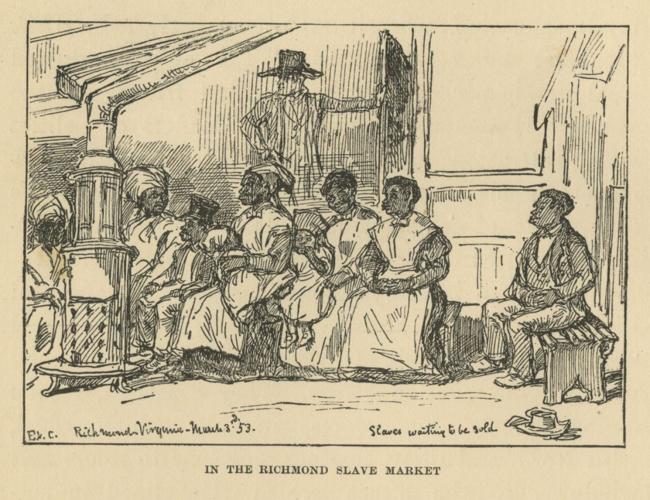 Eyre Crowe, “In the Richmond Slave Market.” 3 March 1853, published in With Thackeray in America (1893). Library of Virginia 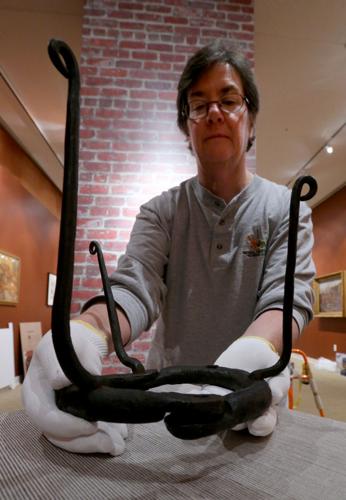 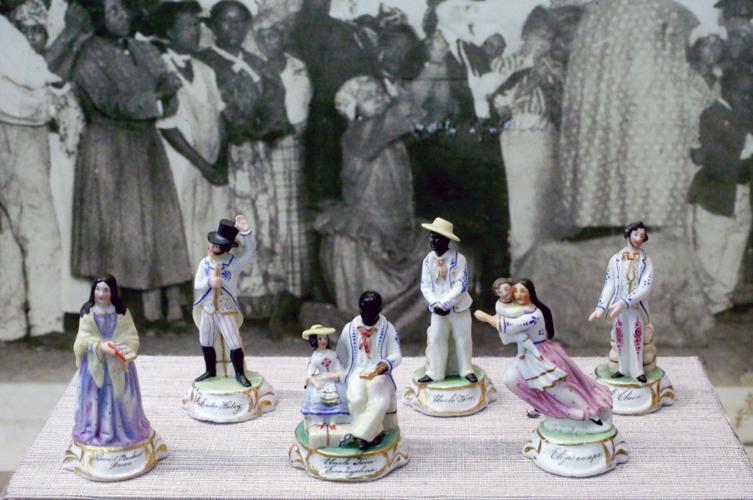 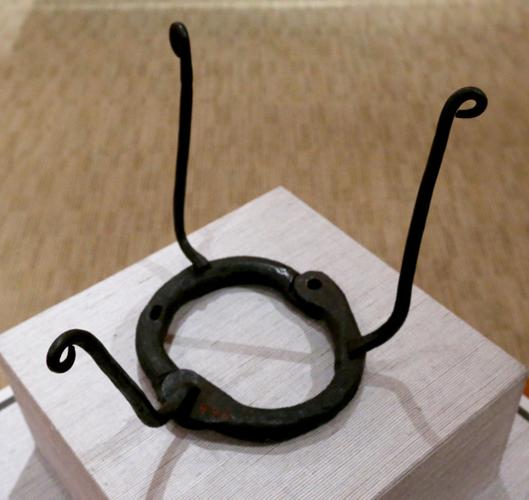 An iron slave collar worn for punishment after a runaway attempt in New Orleans is part of the exhibit at the Library of Virginia. ﻿

To understand how Richmond became the largest slave trading center outside New Orleans before the Civil War, you have to turn your focus from Africa to the Deep South.

The United States had banned import of slaves from Africa in 1808, but the demand for slaves continued in the expanding cotton fields to the South and West. In the Upper South, particularly in Virginia, one of the largest “crops” became slaves who were no longer needed for agriculture. Richmond — with its central location and access to transportation by water, rail or road — became Virginia’s dominant slave trade center by the 1840s and 1850s. The people on the auction block were usually born here, had grown up here, and would often be sold away from here.

“To Be Sold: Virginia and the American Slave Trade” explores the dynamics of that trade in a new exhibition that opens tomorrow at the Library of Virginia. It sheds light on a sad and sordid history centered in Shockoe Bottom, where the possibility of a baseball stadium has ignited passions about preservation.

The exhibit grew out of Maurie McInnis’ book, “Slaves Waiting for Sale,” which she based on a painting by British artist Eyre Crowe after he visited a Richmond slave auction in 1853. McInnis, who curated the library exhibition, is an art history scholar and vice provost for academic affairs at the University of Virginia.

The exhibition offers a rare reunion of both of Crowe’s paintings from his Richmond visit: “Slaves Waiting for Sale” and “After the Sale: Slaves Going South from Richmond.” The first was ﻿lent from the private collection of Teresa Heinz and the second by the Chicago History Museum.

The third Crowe slavery painting from that trip, “Slave Sale, Charleston, South Carolina,” was located in Cuba after the publication of her book, McInnis said. Government concerns kept it from traveling to Richmond, but a same-size photograph printed on canvas will be displayed with other related items.

Of the 12 million Africans who were enslaved and sent to the New World, about a half-million arrived in what is now the United States, McInnis said. About 4 million went to the Caribbean and about 5 million to Brazil. ﻿

Virginia ended its participation in the international slave trade in 1788. After the national ban in 1808, the slave trade within the country sent more than two-thirds of a million people from the Upper South to the Lower South — more than the total number of people imported to the U.S. from Africa. ﻿

“It’s the largest forced migration of people in the history of this country,” said Gregg Kimball, the library’s director of public services and outreach. He’s also the author of “American City, Southern Place,” a book on Richmond’s cultural history before the Civil War. The impact of that migration on black families was “pretty easy to recognize. There’s no premise that anybody was sold as family groups,” he said.

“They rarely even arrived at the sale still intact as a family,” McInnis concurred. Slave traders who worked in a particular area would contact planters to see if they had any surplus slaves. “The people they were interested in were between the ages of 15 and 30. They were interested in finding people to sell who could still be put to work in the fields and would have many years of work left.”

The exhibit presents some of the horrors of slavery, including a photo of a man’s back scarred by whipping and examples of whips that were used to administer such a lashing.

An iron collar worn for punishment after a runaway attempt in New Orleans was cut off by Union troops in 1863 and sent to the Massachusetts governor. A history of the 3rd Mass. Cavalry described the scene:

“Upon the neck of one (female slave) whose skin was almost as white as my own, was riveted a heavy iron ring, with three prongs each a foot in length. The ring had worn large sores upon her neck.”

Crowe’s “Slaves Waiting for Sale” paints a scene that on the surface looks much more benign. ﻿Nicely dressed blacks sit﻿ on benches near a round ﻿stove.

Interactive features will help visitors understand what the painting shows. When they point an iPad at an area of the painting, related details will pop up, such as written commentary from someone at the time or related advertising.

“One of the things we’ve learned as we’ve done focus groups with community members (is that) people don’t know how to read the paintings,” McInnis said. “They don’t know how to interpret them, how accurate they are.”

When people looked at the clothing in the painting, for instance, they asked, “How can slaves be dressed so nicely? Surely that’s just the painter cleaning up the scene,” McInnis recalled, “when in fact we know instead that slave traders regularly dressed up the people they were selling. It was really part of the commodification of the human body.”

Materials on display include a ledger book recording “Negroes sent South by Robt Lumpkin” in 1849, a page of printed receipts filled in to note the $4,375 price of “one Negro slave named Polly” in 1864, an ad for the sale of “a number of valuable slaves consisting of an excellent carpenter, a brick moulder, a tanner, a good crop hand, 2 women and 5 children” in 1812 and abolitionist pottery decorated with scenes from “Uncle Tom’s Cabin.”

“It’s a really, really difficult and emotional subject,” McInnis said. “Many people should find it disturbing. Man’s inhumanity to man really knows no bounds. This exhibit is an example of that.

“But think about the power that the Holocaust Museum has had in helping communities heal. Hopefully, this will help Richmond heal.”

'To Be Sold: Virginia and the American Slave Trade'

When: Monday through May 30

Origins story explains why 'Flowers in the Attic' was so dark

Actor Max Irons had no idea why friends looked shocked when he told them he was considering a role in “Flowers in the Attic: The Origin.”

"Swagger," the Apple TV+ series based on basketball star Kevin Durant's youth, is returning to Richmond to film its second season and is looki…

Holder and Hussle had known each other for years when a chance meeting outside the Grammy-winning rapper’s Los Angeles clothing store led to the shooting, and his death.

Taylor Swift's alleged stalker has been arrested, and a new version of the Queen's "official duties" have been rewritten following her Platinum Jubilee. Get more celeb news here.

Items on display include an 1812 ad for the sale of “an excellent carpenter, a brick moulder, a tanner, a good crop hand, 2 women and 5 children.” ﻿

Eyre Crowe, “In the Richmond Slave Market.” 3 March 1853, published in With Thackeray in America (1893). Library of Virginia

An iron slave collar worn for punishment after a runaway attempt in New Orleans is part of the exhibit at the Library of Virginia. ﻿