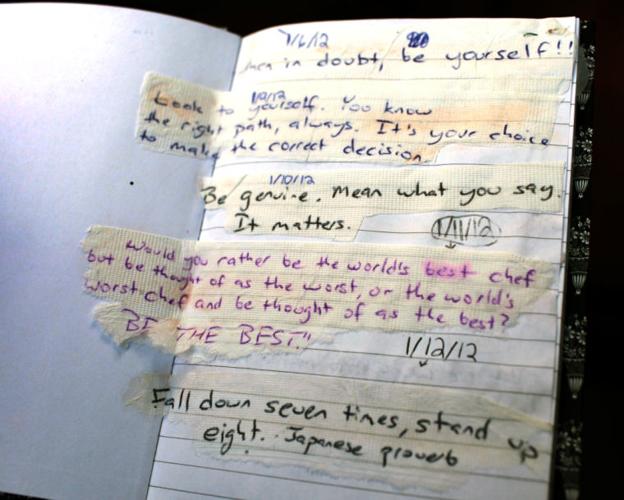 Emma keeps some of her father’s notes in a notebook. They took on greater meaning during his cancer battle. 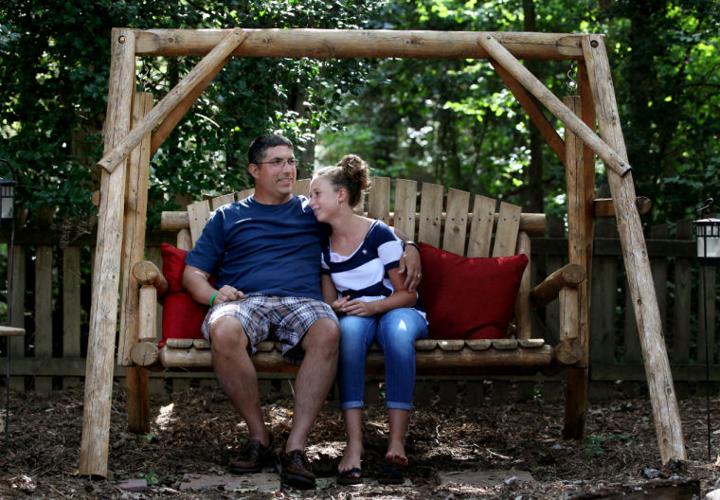 Henrico County resident Garth Callaghan began writing napkin notes to pack in lunches for his daughter, Emma, when she was in kindergarten. She’s now an eighth-grader, and he’s still doing them. But the notes have grown up with her, going from whimsical sketches and basic words to sports phrases and words of inspiration.

In the quiet of early weekday mornings, before the rest of Garth Callaghan’s household wakes up and scurries off to school and work, he pours a cup of coffee, pulls out a clean white napkin and, with the same familiar pen, begins to write.

In small, neat letters, he prints on the napkin: “ ‘If the universe tried for billions of years it would not be able to create another exact copy of you.’ ”

When the note is more personal, it’s always followed by “ ‘Love, Dad.’ ”

Then he places the napkin inside his daughter Emma’s lunch, along with her sandwich and fruit and whatever else he’s prepared for her that day.

Callaghan has been writing napkin notes to Emma since she was in kindergarten. Back then they were whimsical sketches of hearts and stars and basic words that she could understand, a little something to let Emma know that her daddy was thinking about her during the day.

But now 13 and an eighth-grader at Henrico County’s Moody Middle School, Emma is growing up. The notes, however, haven’t stopped.

Rather, they’ve evolved and grown up right along with her.

These days, Callaghan includes sports phrases on softball days, a word of encouragement on test days, even a string of seemingly random letters – a code that only the two of them know.

Like “DFTBA,” which, Callaghan says, means “don’t forget to be awesome.”

The notes are no less important to Emma now than when she was 5.

If anything, they’ve taken on a greater meaning.

On a recent afternoon, as he waited for Emma to get home from school, Callaghan talked about the notes, which he recently decided to share with the world through Facebook. He hopes other parents see them and copy them.

He’s also begun writing extra notes and mailing them to friends and family – and sometimes strangers – who are going through hard times and just need a few words of encouragement.

In the early days, however, the point was simple. Callaghan’s jobs in sales and marketing required that he travel a lot when Emma was younger, and he wanted to make a connection with his daughter even when he wasn’t home.

He’d write notes and leave them for his wife, Lissa, to insert into Emma’s lunch. Emma is their only child.

Occasionally, he’d forget. But that was rare.

By the time Emma was 8 or 9, she had come to expect those notes. On mornings when she beat him downstairs only to find a note-less lunchbox, she’d actually come to him looking for the note, he said.

“That’s when I realized, this is something that really matters.”

And it wasn’t just the note that was important – it was Emma’s whole lunch.

Callaghan said when he was home during the week, he took particular pride in making nutritious lunches. Adding the napkin was an easy way to instill good table manners.

Lissa Callaghan said she’s happy her husband has taken on lunch duty, which frees her to help Emma with other things in the mornings, such as choosing clothes and fixing her hair.

“He’s taken over that chore, and he seems to enjoy it,” she said of making lunches.

As for the notes, “I think it’s great,” she said, adding that she remembers being a teen and pulling away from her parents as she sought more independence, so “it’s nice that he keeps that connection with her.”

But in the fall of 2011, Callaghan was diagnosed with kidney cancer.

The initial diagnosis, he said, was grim. In the months leading up to surgery, writing the notes took on an almost-militant importance for Callaghan.

“During this whole process …” Callaghan said, then paused. He doesn’t like to dwell on the morbid thoughts that consumed him back then, he said.

In essence, he wrote the notes because “ ‘at the end of the day, these notes might be the only thing my daughter has left of me,’ ” he recalled thinking.

His tumor was successfully removed in December 2011. However, the notes had had an impact on Emma, too.

One afternoon after his surgery, Callaghan said he happened to look into the dining room after Emma came home from school and saw her ripping that day’s napkin.

Turns out Emma had been saving her napkin notes in a little black-and-white composition book. Opening the pages, he saw strips of napkins – only the parts he wrote on – neatly glued to the pages.

For Emma, the notes are something she looks forward to every day.

At times, she said, her friends tell her that they’re jealous of her notes.

When her father got sick, however, “I was really worried. I really wanted to have a piece of him with me,” Emma said.

Today, she still keeps some of her notes, but not all.

“I mean, they are napkins, so they do get thrown away,” she said matter-of-factly.

Emma acknowledges that she tries every day to wait until lunchtime to see what her dad wrote. Occasionally, when she grabs a snack out of her lunch bag, she peeks.

“It helps me to have something to look forward to,” she said.

Though he doesn’t travel as often, Callaghan points out that time with his teen daughter is harder to come by these days.

In addition to her schoolwork – she’s in Moody’s International Baccalaureate Program – she plays softball, and swims and dives.

The notes “are my way of connecting with her one additional time during the day,” he said. “As a dad, this is part of my day, (and) I really value this extra level of communication we have.”

He also knows the inevitable is coming.

“My daughter’s a teenager now, so at some point, the notes might cease to be cool,” he said. But for now, “for her and I, this is a special thing that we share.”

WHY YOU KNOW HIM: Garth Callaghan touched hearts far and wide this year when he began publically sharing on Facebook the lunch notes that he writes for his teen daughter, Emma.

Garth Callaghan, now battling cancer, has been writing the notes to his daughter since kindergarten. Today the family's story will be featured on “The Rachael Ray Show.”

Emma keeps some of her father’s notes in a notebook. They took on greater meaning during his cancer battle.

Henrico County resident Garth Callaghan began writing napkin notes to pack in lunches for his daughter, Emma, when she was in kindergarten. She’s now an eighth-grader, and he’s still doing them. But the notes have grown up with her, going from whimsical sketches and basic words to sports phrases and words of inspiration.