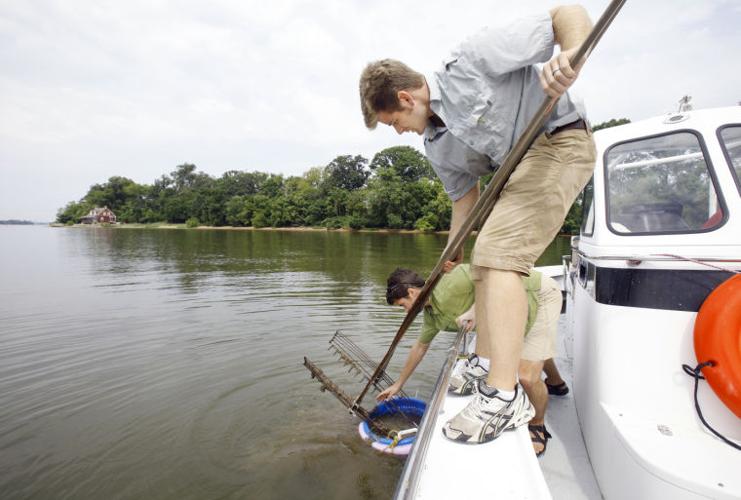 Virginia Commonwealth University doctoral student Joe Wood pulls in clams and mud from the James River near Hopewell as part of a study on water quality. Later, he would test the mud for toxins and gauge the clams' ability to siphon algae. 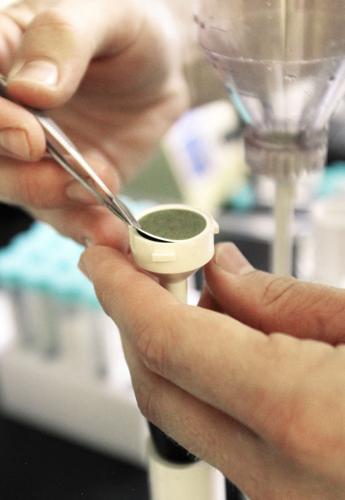 The river abounded with microscopic cells of algae, which can foul the water and, in some cases, sicken people and animals with toxins.

The algae outbreak, or bloom, was hard to see. In fact, the James looked lovely on this late August morning, its waters glassy under an overcast sky.

"Up here, you are having algal blooms all the time, whether you see them or not," said Bukaveckas, 52, a Virginia Commonwealth University river ecologist.

The tidal James has a huge algae problem, one of the worst in the Chesapeake Bay region, and Virginia officials say it could cost the public more than $2 billion to get the algae under control.

To better understand why the James is such an algae factory, and to get ideas on how to solve the problem, the state is putting up about $3 million for Bukaveckas and other scientists to conduct a three-year study. The research began this summer.

The study will examine how prevalent algae are in the tidal James, how dangerous they are and what causes them to flourish, among other things.

In the salty James at Hampton Roads, about 110 miles downriver from Richmond, harmful algae are often large enough to see when they break out — in so-called red or mahogany tides.

Algae are smaller in the James' tidal, freshwater reaches, from Richmond to just below Hopewell. Sometimes the tiny cells join in visible clumps or chains, but more often they thrive unseen during warm months.

From May through September, Bukaveckas said, the James around Hopewell is home to one big algae outbreak.

The James is high in pollution from human and animal waste and fertilizers, and the pollution feeds the algae.

Today, Gov. Bob McDonnell's administration says it could cost $2 billion or more to reduce pollution enough to meet those limits.

The money would be spent on making sewage-treatment plants, farms and other polluters — already involved in expensive cleanups to restore the Chesapeake Bay — get even cleaner.

To see if the algae limits for the James are scientifically sound, McDonnell officials set up the multimillion-dollar study. Findings could lead to less stringent algae limits and less expense; even tougher limits and more expense; or no change.

"Whatever the science tells us to do, that's what we'll do on the James," said Anthony Moore, a deputy secretary of natural resources for Virginia.

Algae can hurt you beyond the pocketbook, as some produce toxins harmful to people, pets and other animals.

One focus of the study is an often-toxic form of algae called microcystis, which appears to be on the increase across the globe as well as in the James around Hopewell.

The algae's liver-attacking toxin killed more than a dozen sea otters in California's Monterey Bay, scientists said in 2010. The toxin has been linked to the deaths of flamingoes in Africa, and experts say it can kill pets and livestock that lap up tainted water.

People aren't likely to slug down a lot of dirty river water. But when swimming or boating, people might swallow a little, resulting in diarrhea and vomiting, or they might get tainted water on their skin and get a rash, state health officials say. Inhaling dirty droplets can cause a runny nose and eyes, sore throat and allergic reactions.

Health officials occasionally get complaints, mostly about rashes, from people who swim in waters with algae, said Rebecca LePrell, the Virginia Department of Health's director of environmental epidemiology. "We have not received any recent health complaints related to algae in the James River."

State biologists investigated large algae outbreaks in the James at Hopewell in 2005 and 2008. No one was harmed.

The resort town of Colonial Beach temporarily closed its beaches in summer 2004 when toxic microcystis algae contaminated the Potomac River.

"People should consider that there is always a risk of coming into contact with harmful algae when swimming in natural bodies of water during warm summer months," LePrell said.

It's not clear why algae are so abundant in the James, but there are clues. For one thing, there is a lot of development in the James' watershed, or basin, which means a lot of pollution to feed the algae.

The shape and flow of the James are also factors. The James moves briskly from western Virginia to Richmond. At about the Mayo Bridge downtown, the river becomes tidal, slower. But the James is fairly narrow there, so it still moves well from Richmond to Hopewell.

At Hopewell, however, the river suddenly gets wider and shallower. While generally headed downriver, pollutants slosh back and forth with the tide, making them available as algae food for long periods. And that shallow water means more sunlight, which helps produce a lush algae garden.

On a skiff in the James near Hopewell, Bukaveckas and VCU doctoral student Joe Wood pulled up mud and clams from the river's bottom.

"It makes you feel for people who used to be oyster fishermen," said Wood, 28, grabbing clams with a pair of long-handled tongs.

Later, in a VCU lab, Wood would test the mud for toxins, and he would gauge the clams' ability to siphon algae from the river when feeding.

Other researchers involved in the study are working the James' salty waters at Hampton Roads.

Results of the fieldwork will go to scientists who are creating a model, or computer simulation, that will illustrate how the James works. The model will indicate, among other things, how much pollution must be cut to get algae to acceptable levels.

"Our hope is less algal blooms, better fishing, better-looking water. People don't like to swim and come out green or red. And frankly there are some health issues."

Study targets James River algae that can be harmful

Virginia Commonwealth University doctoral student Joe Wood pulls in clams and mud from the James River near Hopewell as part of a study on water quality. Later, he would test the mud for toxins and gauge the clams' ability to siphon algae.