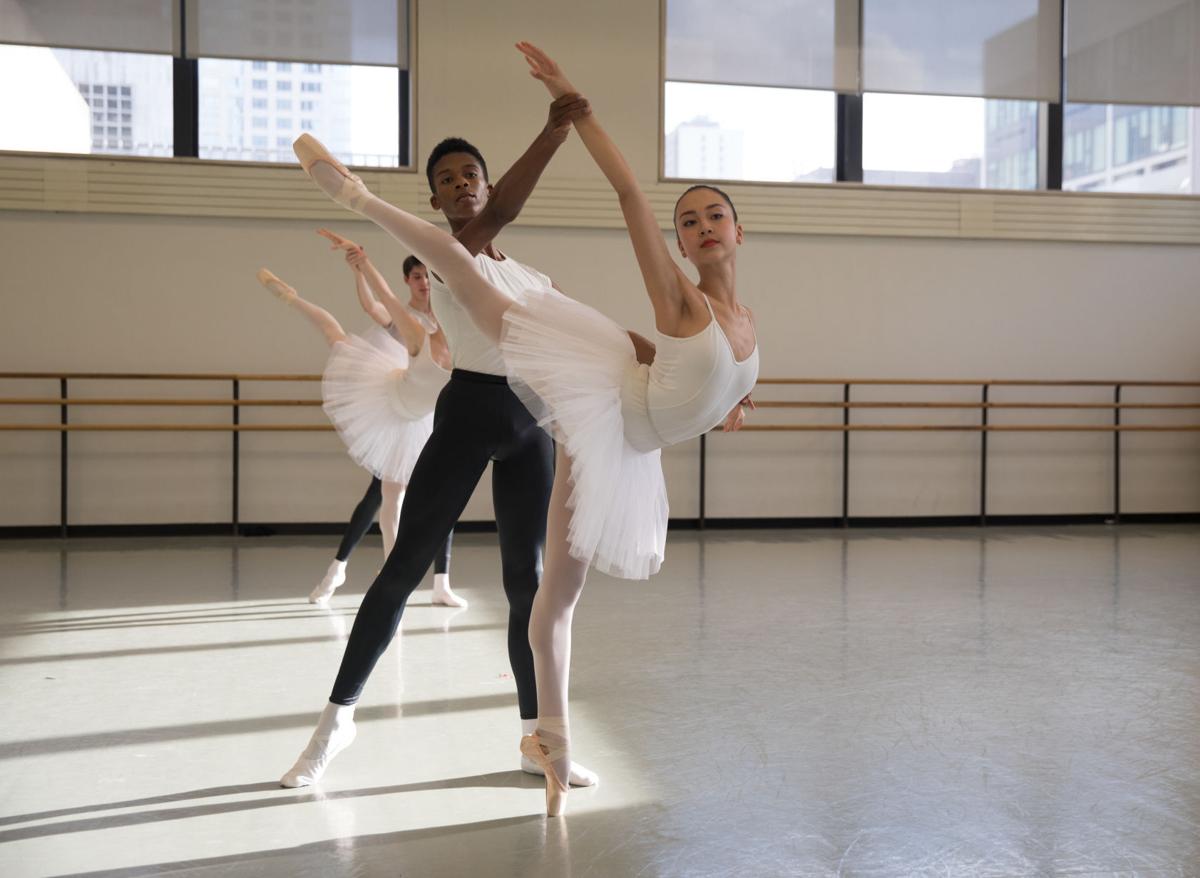 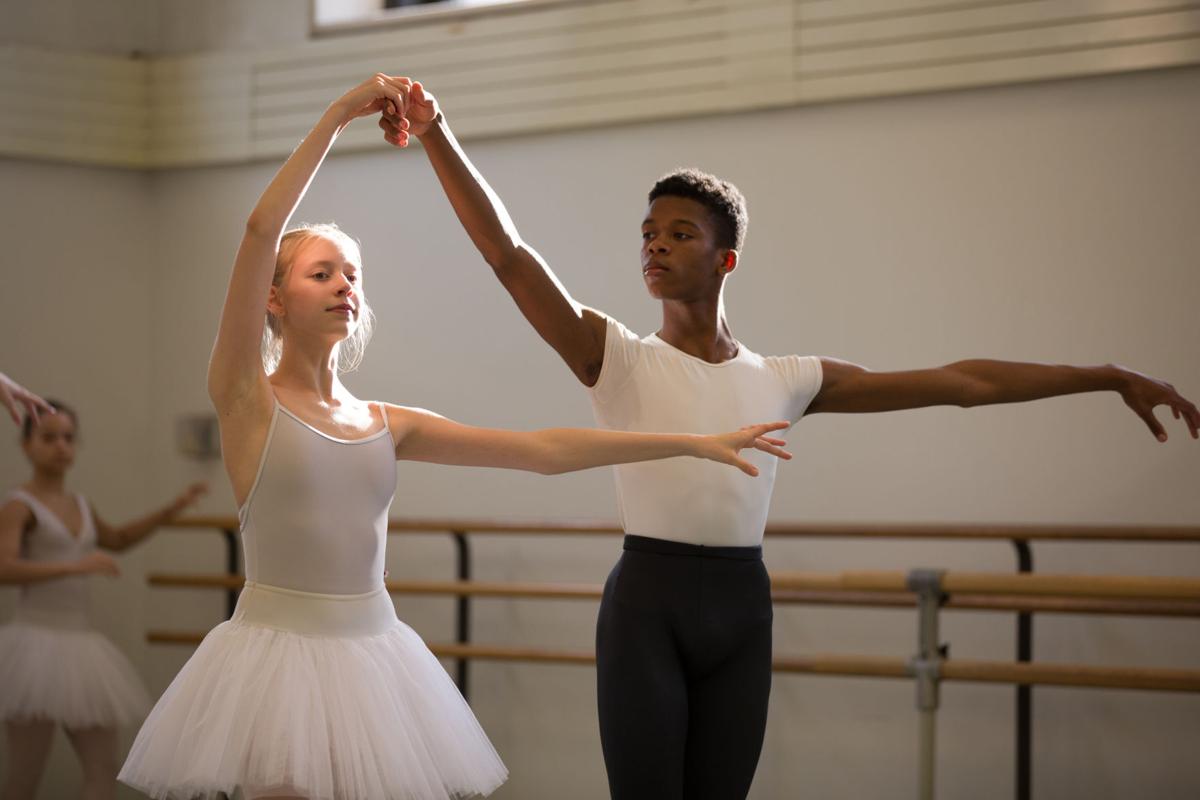 The beautiful blend of athleticism and artistry in dance connected early on with Sam, who started dancing in the fourth grade. 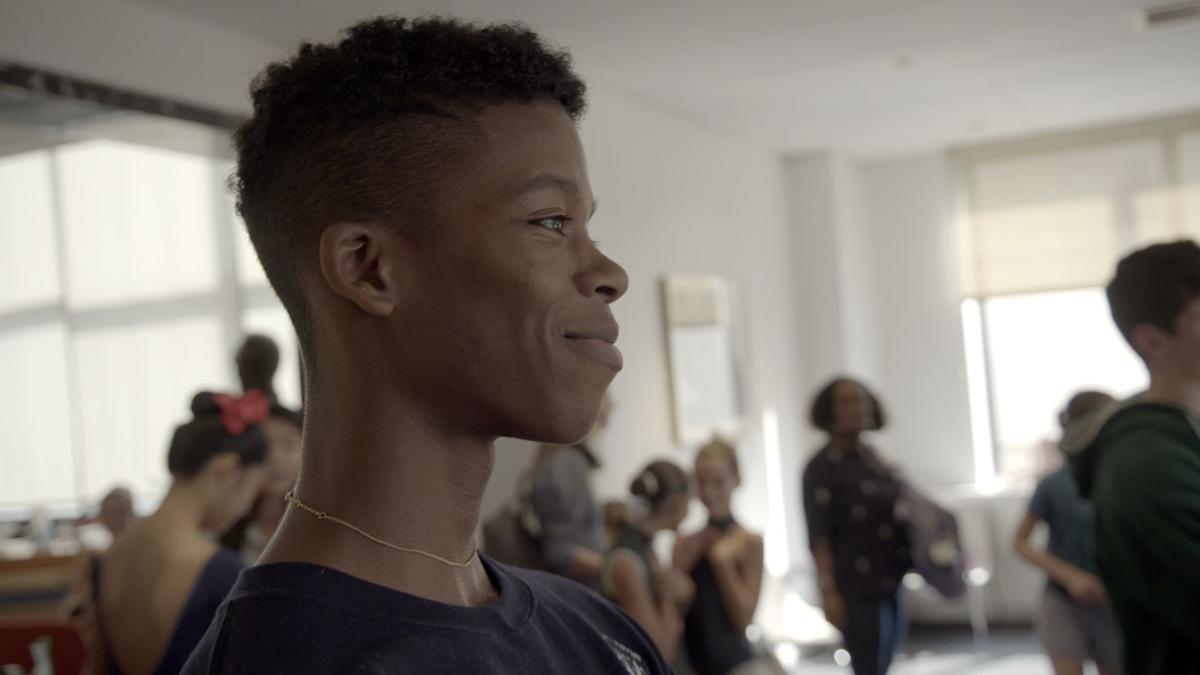 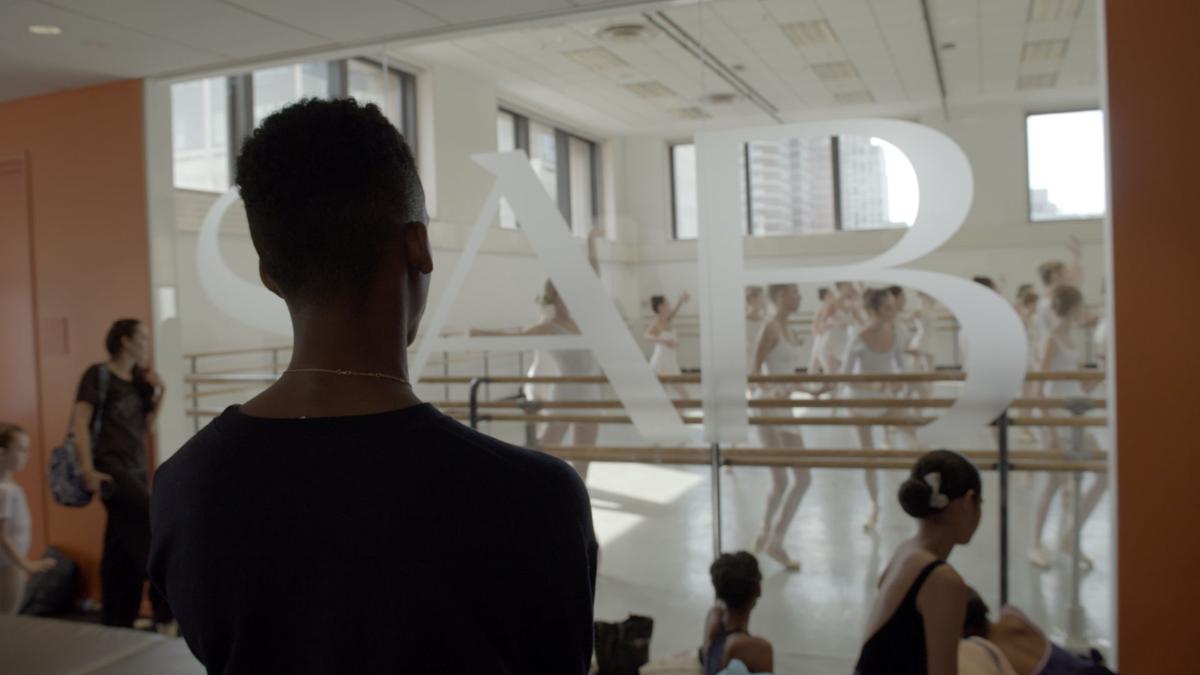 Sam Merkle left RVA at 15 to study at the School of American Ballet in New York. It was necessary for my goals, he says. 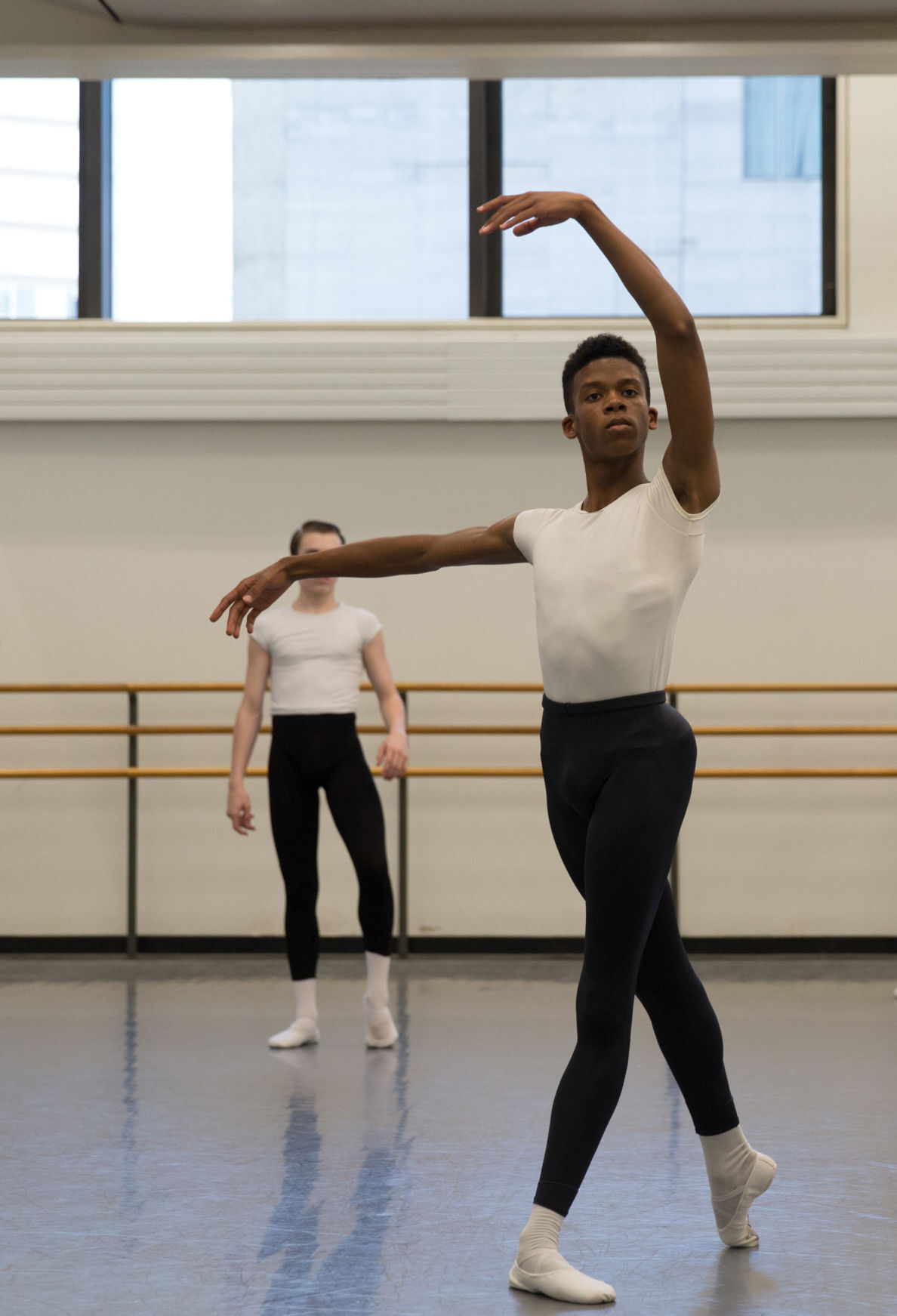 “On Pointe,” a new docu-series on Disney+, shows Sam Merkle and other dancers as they train to pursue a career in ballet.

When he was 15, Sam Merkle moved from Richmond to New York City to attend the prestigious School of American Ballet.

Now, he is one of the primary dancers featured on Disney+’s new docu-series “On Pointe,” produced by Ron Howard.

“On Pointe” follows young people pursuing their dreams of becoming ballet dancers. The series shows younger students as they rehearse and perform in “The Nutcracker” and older students like Sam as they rigorously train for a professional ballet career, ideally in the New York City Ballet. But there are only a few slots and the competition is fierce.

“I always considered myself an athletic person, but I didn’t like contact sports,” Sam, now 17, said from his home in Forest Hill. “I felt like dance was the perfect combination of athleticism and the artistry that I really loved. It’s something that really connected with me. I like the idea of pushing yourself every day, having to constantly improve your form and technique.”

Sam grew up in Richmond, attended John B. Cary Elementary School and started dancing in fourth grade with a musical theater program at school. Then he began dancing in earnest with Richmond Ballet’s Minds in Motion, a program that brings dance instruction to schools across the state.

“It’s really amazing to go into schools and see the raw potential of students who would have never considered dance as a part of their being. Sam was one of those children who you knew had the capacity to develop latent talent,” Cathleen Studdard, former Minds in Motion director, said via email.

A naturally bright and talented kid, Sam stood out to everyone, even at a young age.

Tim Cook, a volunteer at Richmond Public Schools, was asked by Sam’s third-grade teacher to work with him, not because Sam needed extra help, but because he was so bright. His teacher worried that he was getting bored in class. Cook started doing algebra with Sam in third grade and introducing books that were far above his level.

“He was as bright a kid as I’ve ever worked with,” said Cook, who has volunteered at RPS for more than 25 years. “He was extremely intelligent — very bright and very personable. He seemed to have that even at that young age.”

Sam went on to study in Lucille M. Brown Middle School’s International Baccalaureate program and to attend one semester at Maggie L. Walker Governor’s School. During the summer, he attended two programs at the School of American Ballet in New York and was asked to stay.

At 15, Sam packed his bags and moved to New York to live in the dorms and take classes at SAB, regarded by most as the preeminent school for ballet in the United States.

Living in New York “was obviously a huge change from living in Richmond and living with my family. But I loved it,” Sam said. “I knew what I was doing was necessary to pursue the goals and dreams that I had. It was something that I really enjoyed doing. I loved being in New York and experiencing all of these things. It was a great time for me.”

“On Pointe” began filming in 2019 and aimed to follow students at SAB for a full calendar year, although production was cut short in early 2020 when COVID hit and the school was required to shut down.

“The docu-series follows us as we train, rehearse and deal with injuries,” Sam said. He broke his foot early in the filming and spent a big portion of the series working on recovery. The series also followed him home to Richmond to film with his family.

In March of last year, SAB shut down and Sam was forced to return home, where he attended school and classes via Zoom. In November, it reopened for a few weeks before shutting down again.

Now, Sam is still in Richmond, attending his SAB classes via Zoom and waiting for the time when he can return to New York and, hopefully, finish his training in person.

“I’m grateful for the documentary,” he said. “It did a great job of explaining in a palatable form what my training is like, and it’s an update for anyone who may have wondered what happened to me after I moved to New York.”

As for watching himself on TV, he said, “Every kid wants to be on Disney. It was just awesome, to get that opportunity and to watch the experiences that I had pre-COVID. It stirred up a lot of memories. That world was so different than the world we live in now. The docu-series has become this moment in time when things were so different.”

All six episodes of "On Pointe" started streaming on Disney+ on Dec. 18.

At long last, there is a Richmond restaurant dedicated to macaroni and cheese.

President of Richmond Food Truck Association resigns after participating in D.C. rally that led to attack on Capitol

The president of the Richmond Food Truck Association has resigned after participating in Wednesday’s rally in Washington, D.C., that led to a …

A Dolly Parton statue may be erected at the Tennessee Capitol

If it's commissioned, the sculpture will face the historic Ryman Auditorium, a music venue where Dolly Parton has played throughout her career.

Harissa is a flavor-packed North African paste made from a mixture of chili peppers and spices, while tahini yogurt and feta are staples of th…

"Running a mile each morning has been curtailed by COVID, so I am working on getting The Pet Set re-released, and feeding the two ducks who come to visit me every day."

UPDATED: Richmond restaurant patios that are heated and covered for winter

Baby, it's cold outside, but as the pandemic still rages, experts still say the best way to dine out at restaurants is to dine outside. Even i…

(TNS) — The TV show American Pickers will be filming in North Carolina in March, and they're looking for people with large antique collections to be on the show.

Critic picks 20 of the most eagerly awaited books of 2021

Whatever 2021 may bring, it will definitely be filled with new books.

The beautiful blend of athleticism and artistry in dance connected early on with Sam, who started dancing in the fourth grade.

Sam Merkle left RVA at 15 to study at the School of American Ballet in New York. It was necessary for my goals, he says.

“On Pointe,” a new docu-series on Disney+, shows Sam Merkle and other dancers as they train to pursue a career in ballet.