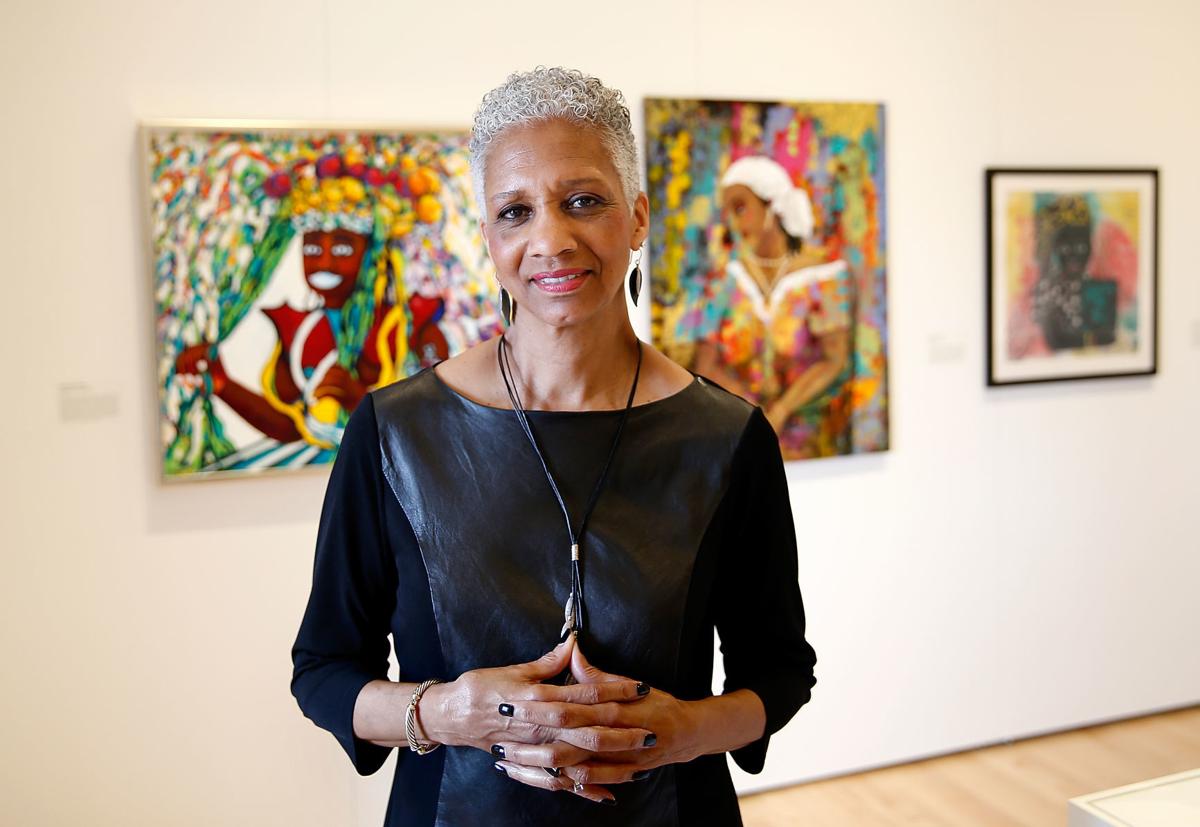 Black History Museum director Adele Johnson said, “We’re working on marketing. ... We’re communicating with our members more frequently. ... I think it makes a difference when people see you and see the passion that you have for the museum.” 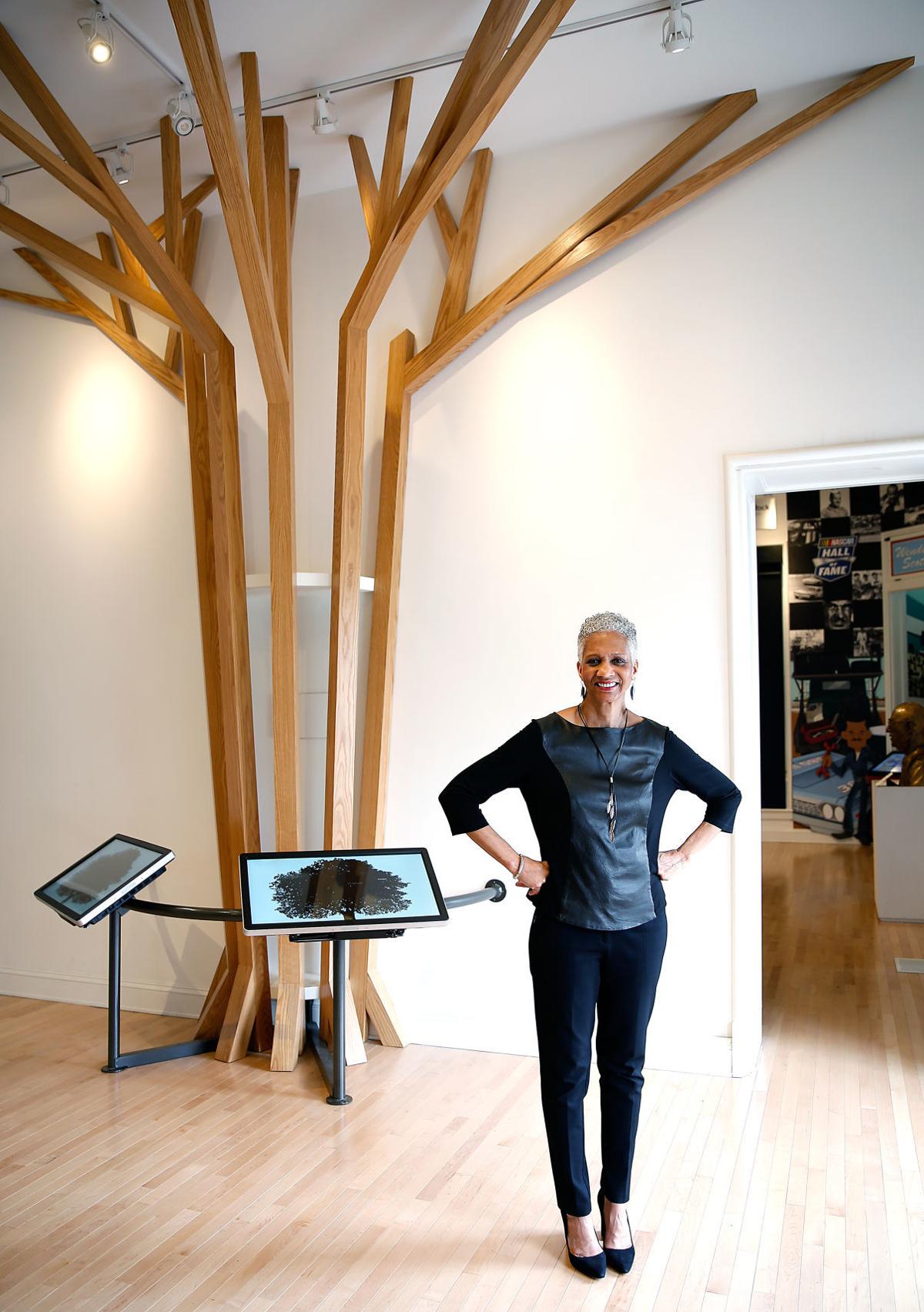 Since January, Adele Johnson has been executive director of the Black History Museum & Cultural Center of Virginia in Richmond’s Jackson Ward. Here, she is photographed with a depiction of the Emancipation Oak, a tree that stands near the entrance of the Hampton University campus and is a symbol of the school’s rich heritage and perseverance. 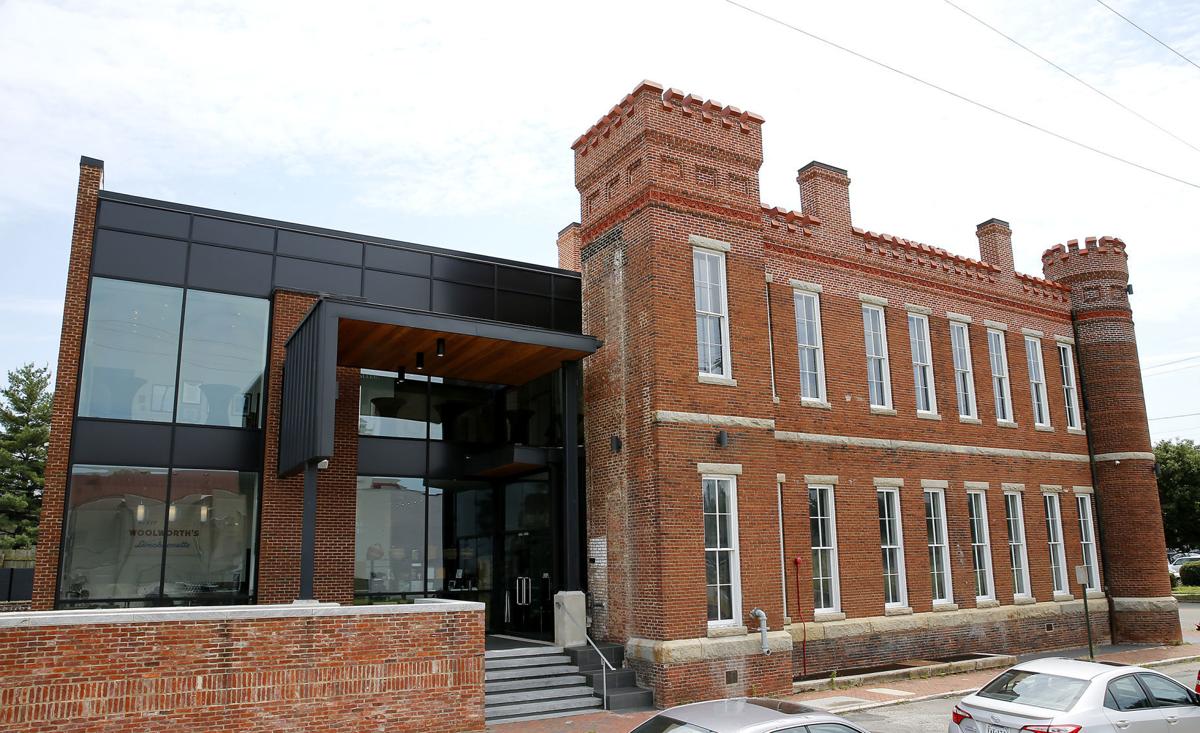 The Black History Museum & Cultural Center of Virginia is among the 22 regional museums and cultural sites that announced plans to reopen with safety protocols.

Adele Johnson, the new executive director of the Black History Museum & Cultural Center of Virginia, says she’s wanted to work at the museum for 20 years, but the time was never right, until now.

In January, the museum named Johnson, a veteran of the Richmond Public Schools Education Foundation and the Virginia Minority Supplier Development Council, the new executive director for the museum.

She had served as the interim director for the past year and a half after former executive director Tasha Chambers stepped down in 2017, a few months after the museum opened its new 12,000-square-foot location at the Leigh Street Armory in Jackson Ward.

“The Black History Museum is one of the best-kept secrets in Richmond,” Johnson said. “My vision is for it not to be a secret anymore.”

We sat down with Johnson to talk about her background, the city of Richmond and her vision for the future of the museum.

You were retired. What made you come out of retirement for this job?

I think it’s a real responsibility to be here at the Black History Museum. To be the keeper of the culture. I feel proud every time I walk into this building, proud to tell the story of our ancestors.

What is your vision for the Black History Museum?

I think the museum has so much to offer. I’d like to see it grow. We have a fabulous space here. It still looks like an armory on the outside, but it’s light and inviting on the inside. I’d like to see us increase our artifacts and offer more hands-on history.

People feel welcome here. People like being here. They feel inspired, getting a side of the story they may not have heard before. Some items downstairs — like the KKK robe and the slave collar — people want to talk about. The museum is a safe place to do that.

What is the attendance?

What is your budget?

Our annual budget is $850,000. We want to raise $10 million to establish an endowment so that we don’t need to raise funds for operating every year.

How big is your staff?

We have a staff of 2½. Including myself.

For a museum this size? That seems small.

Our vision is to have a larger staff. We need a curator on staff and a program director.

How are you getting the word out about the museum?

We’re working on marketing. We’re running a commercial airing on NBC 12 right now. We have been sending out information to the media on a more regular basis. We’re communicating with our members more frequently. We have a newsletter. I’m trying to get out and speak to more organizations and groups. I think it makes a difference when people see you and see the passion that you have for the museum.

What is your mission?

Our mission is to preserve stories that inspire. We tell the untold stories of African Americans.

Can you talk about a few items from the permanent exhibit?

I love the Emancipation Oak. I used to come here and just sit when I first started. It’s so soothing and comforting.

Elizabeth Keckley. Her story of being beaten at age 4 for letting a fly get on the master’s baby. She bought her own freedom and became one of the most powerful black women. She became the dressmaker for Mary Todd Lincoln.

We have an exhibit on the Green Book. This was like a precursor to Trip Advisor. It was called The Negro Motorist Green-Book. It provided a guide for gas stations, hotels, restaurants and barbershops that would serve black people in the South.

As a child, my family and I went (on a trip to the South). We went into a restaurant where we waited and waited. They said, ‘Black people are served in the back.’ We went into the back and were eventually served. If we had had a Green Book, we would have known where we could eat and be welcomed. My family had never heard of the Green Book.

There are exhibits on desegregation; Massive Resistance; a prototype of the Arthur Ashe statue on Monument Avenue; the Richmond 34, a group of Virginia Union University students who sat in at the lunch counter of Thalhimers department store [to help desegregate Richmond].

Where did the KKK robe come from?

Someone donated it a year ago. After much discussion, we decided to accept it. It’s important to remember what African Americans went through and still go through. Even though they maimed, killed and lynched us, we are still strong and we continue to move forward.

Where are you from originally? How did you end up in Richmond?

I’m from New Jersey. I grew up in a little town called Sea Bright on the shore. I went to Virginia Commonwealth University and got a degree in urban planning. I really liked Richmond much more than I thought I would.

I went to visit other cities that I thought I might like to live in, and I came back every time, saying, “No, I like Richmond better.” So I’ve been here ever since. I met my husband here. He was an entrepreneur; he ran a printing business called Choice Communications. Now, he’s working with Atlantic Constructors Inc.

Do you have children?

I have two grown children. They’re both married. I have five grandchildren.

Where do you live?

We moved from Brandermill to Rocketts Landing. I love it. It’s 10 minutes to the museum. We love being downtown. We walk the Virginia Capital Trail. Any outdoor activity. My knee is telling me my running days are over, but I’ll be walking the Monument Avenue 10K.

What do you like to do in your free time?

My husband is a foodie. We love to go out to eat. Some of our favorites are Acacia, Croaker’s Spot and Mama J’s. We’re both music lovers. We love the Richmond Jazz Festival. Any outdoor music event. We go to wineries. I feel younger since we moved downtown.

On the wall across from VCU Police Department, advocates unveil a mural that imagines a world without youth prisons

Kala Williams dreams of a 20-room mansion, where her nephews could one day run freely, stumbling over the toys strewn across her floors. The w…

Black History Museum director Adele Johnson said, “We’re working on marketing. ... We’re communicating with our members more frequently. ... I think it makes a difference when people see you and see the passion that you have for the museum.”

Since January, Adele Johnson has been executive director of the Black History Museum & Cultural Center of Virginia in Richmond’s Jackson Ward. Here, she is photographed with a depiction of the Emancipation Oak, a tree that stands near the entrance of the Hampton University campus and is a symbol of the school’s rich heritage and perseverance.

The Black History Museum & Cultural Center of Virginia is among the 22 regional museums and cultural sites that announced plans to reopen with safety protocols.