Subscribe
Read Today's E-Edition
Share This
On Hull Street in Manchester, the 'Brown Girl Narratives' mural is an ode to black women
0 Comments
Share this
1 of 2 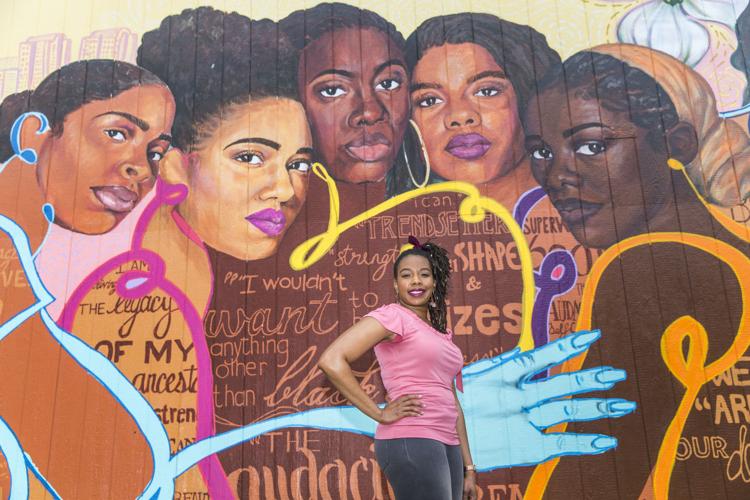 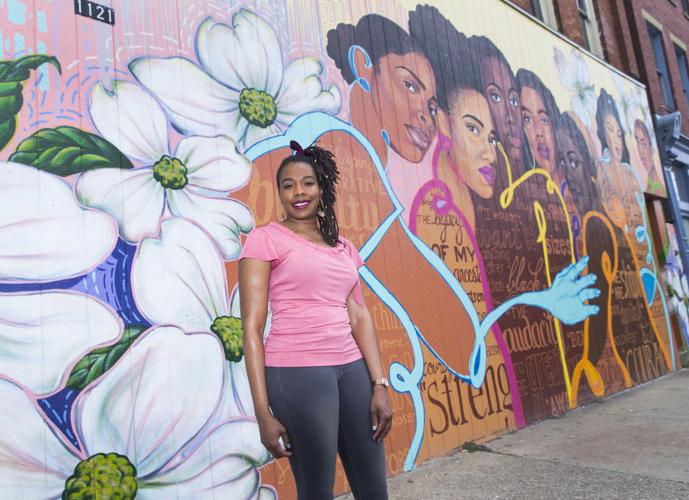 If the walls of Hull Street could talk, they’d speak of loss. As years passed, storefronts waned into graffitied windows and brick walls, neighboring industrial lofts that have branded Manchester as “up and coming.”

But sandwiched between Max Market convenience store and Croaker's Spot, the longstanding "soul of seafood," sits "Brown Girl Narratives," a 20-by-60-foot-tall mural infusing color onto the South Richmond stretch, another reminder that Hull Street is here to stay.

Seven black women of different shades, shapes, hair and sizes are embraced by a sky-blue hand weaving across and around them, linking the women together.

Within each woman’s body are quotes and phrases from the research that inspired this artwork: VCU doctoral student Kristal Brown’s dissertation that focuses on the role racism plays in the physical and mental health of young black women.

“I wouldn’t want to be anything other than black”

“We are shaping our narratives”

In the months leading up to the mural, Brown facilitated conversations across Richmond, where she asked what it was like to be a black woman. The stories frequently overlapped.

Some remembered experiencing racism from the age of 4; white kids laughing at Black History Month movies at school; being told they “talk white” but have braids.

Others explored the complexities of being a police officer in a predominantly white male space or being bullied for their lips and body.

“It was something that I felt like we needed to talk about, particularly in Richmond, where the city is still very much divided,” Brown said. “There were many times I wanted to say, ‘Me too.’ ... It makes you know that it’s not just you.”

Brown and artist Austin Miles, a muralist whose work focuses on women of color and body image, wanted this mural to be a source of healing from these experiences, and for a neighborhood that has long experienced displacement and high eviction rates.

“When communities are becoming gentrified, the people who were there originally aren’t seen,” Miles said. “Women in this mural matter. The black people in that community matter. I hoped that that would be a motivator for togetherness.”

Especially now, in the era of 6-foot distancing, she added.

“There’s something powerful about them holding each other in a moment where we can’t.”

For decades, murals have coated Richmond’s walls and inner nooks hidden in alleyways, but black muralists are few and far between in this city, Miles said, and black female muralists are even less common. The result: an absence of African American women narratives splashed onto buildings.

The culmination of years of research, Brown’s dissertation and a $10,000 grant from Initiatives of Change — with support from the W.K. Kellogg Foundation — led to this. Chelsea Higgs Wise, a longtime South Side resident and organizer, was the force pushing storytellers of racial justice to apply for the granting process.

When Brown was chosen, Higgs Wise knew the mural would be a vehicle for this community’s emotional recovery — its healing.

“I’m a bit terrified, but it’s pieces like this that give me hope,” Higgs Wise said. “It’s where South Side Richmond is still holding on.”

In its sketching stages, when the mural was merely outlines of female figures, a woman came up to Brown while she was staring at the silhouettes.

“I hope the faces are going to be black,” the woman said.

Brown tried not to cry in response. She knew they would be.

As Miles painted, parents who lived in the area would take their daughters to see her process, and to see women, with the same skin color as theirs, celebrated.

When it was finished in November, cars blew their horns as they drove by. Brown, who lives blocks from the mural, has been told residents alter their usual routes to go past the artwork daily.

That’s what Brown had wanted. This belongs to them.