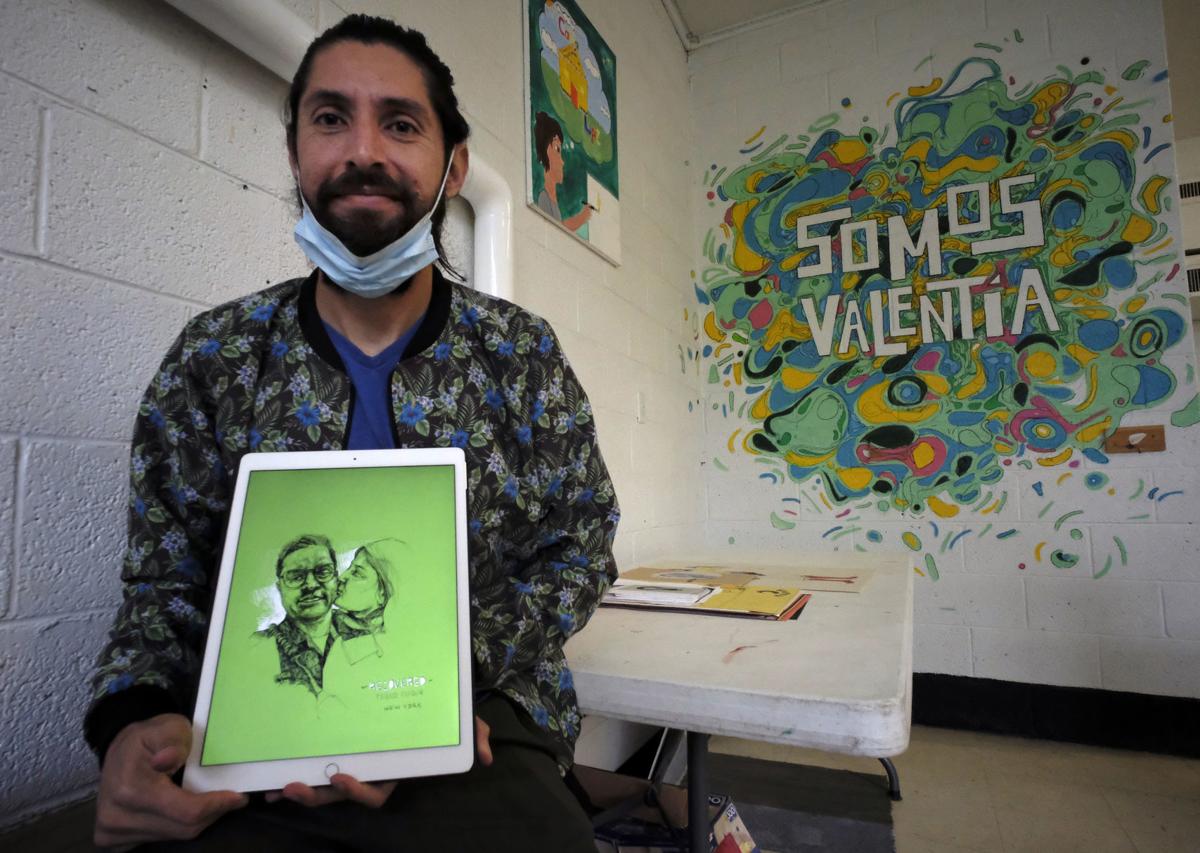 Richmond-area artist and Colombia native Alfonso Pérez Acosta, sitting in his classroom at the Sacred Heart Center, holds his portrait of COVID-19 survivor Pablo Duque of New York. Behind him is a mural he did that says, “We are brave.” 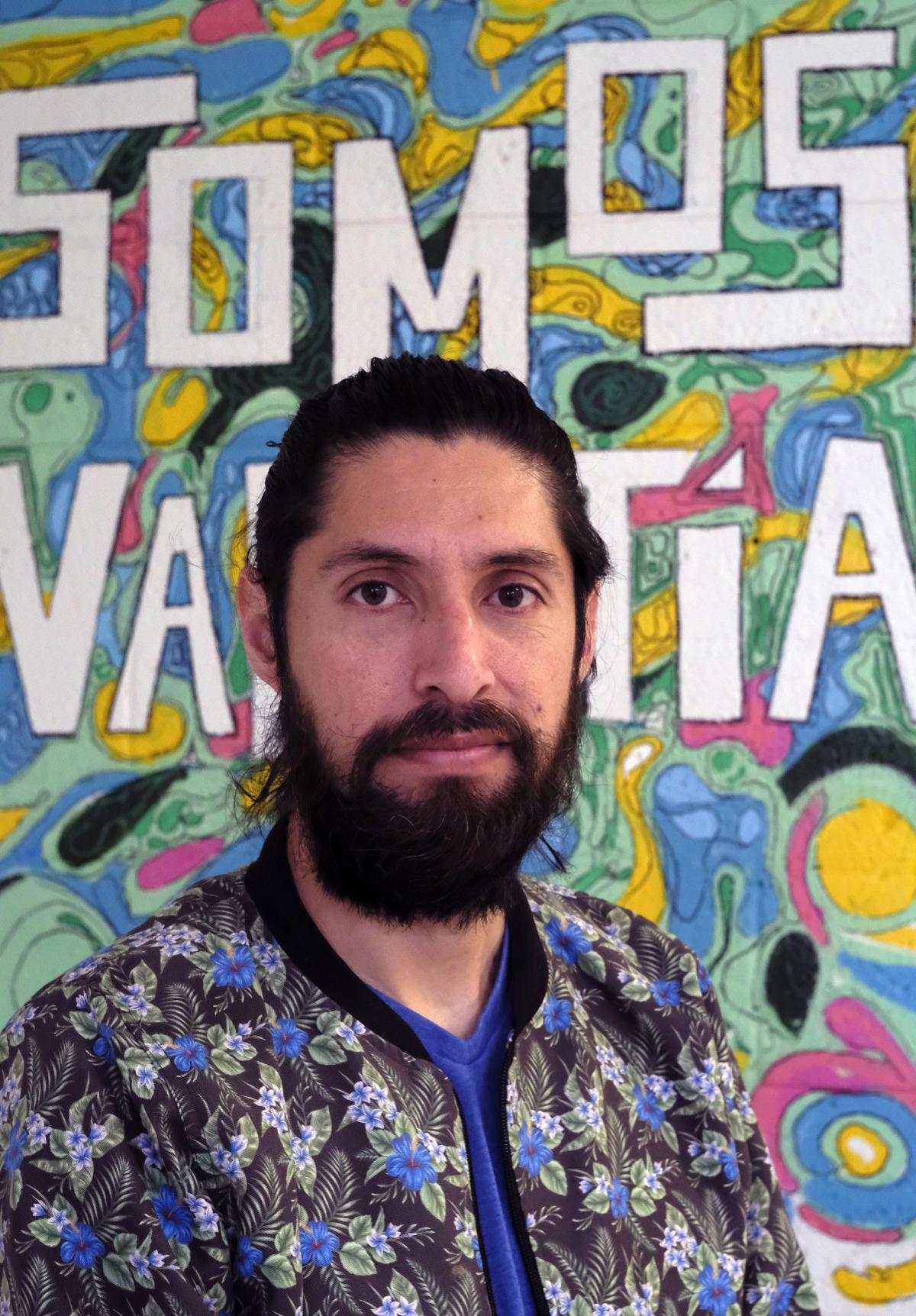 Alfonso Perez Acosta, an artist who has done portraits of people who’ve recovered from COVID-19, stands in front of a mural he has done in his art classroom at Sacred Heart Center in Richmond on Thursday, April 30, 2020.

Richmond-area artist and Colombia native Alfonso Pérez Acosta, sitting in his classroom at the Sacred Heart Center, holds his portrait of COVID-19 survivor Pablo Duque of New York. Behind him is a mural he did that says, “We are brave.”

Alfonso Perez Acosta, an artist who has done portraits of people who’ve recovered from COVID-19, stands in front of a mural he has done in his art classroom at Sacred Heart Center in Richmond on Thursday, April 30, 2020.

Alfonso Pérez Acosta waits until the house is quiet to pick up the stylus. He peeks toward the rooms where his daughters, ages 4 and 6, finally gave in to sleepiness, before turning back to the basal swirls on green-hued backgrounds.

In the moments before midnight, the white spirals culminate in an intimate portrait of a person within a burgeoning community often overlooked during the coronavirus pandemic: survivors.

“The attention is focused heavily on the numbers; the deaths, the cases, and how somber this world is becoming,” he said in paisa-Bogota accented Spanish. “But in the middle of this, there’s also recovery. I wanted to connect people to that reality.”

By Sunday morning, more than 1 million people across the world who tested positive for the coronavirus have recovered, according to a tracker by Johns Hopkins University. In the U.S., that number is almost 176,000.

Acosta wanted to spotlight those stories.

He uploads the sketches to Instagram, with “-RECOVERED-” underneath each portrait, the person’s name and where they’re from. The Richmond-area artist’s grid now includes a series of 25 snapshots into the lives of humans he calls superheroes.

People like 96-year-old Anita Hernandez, a mother of seven kids in Colorado so tough her children call her “Wonder Woman”; Cornelia Ras, a Netherlands native who at 107 has survived two world wars, the Spanish influenza in 1918 and now the coronavirus; Yanira Soriano, 36, who after being in a coma for 12 days in a New York hospital and giving birth on April 3, finally cradled her newborn son. Dozens of health care workers lined the walls with roaring cheers as she left the hospital.

Acosta wanted people to see what he saw: the humanity, the resilience, the hushed reality of happy moments in the midst of an illness that’s ravaged the globe. Quickly after posting his first portrait, comments flooded in from around the world with stories of survival and life after testing positive for COVID-19.

“This was not just for me, but for my daughters, my family,” Acosta said. “It’s important to feel like we’re doing something.”

Acosta, 39, started the Casa Lápiz youth arts program at the Sacred Heart Center, a Richmond nonprofit that focuses on education programming for Latino families, for kids to have a reprieve from navigating the English language and school.

A Colombia-born artist, Acosta has used his art to advocate for black and Latino communities. He’s centered the heart of his work on immigrants, who Acosta said are experts in adjusting — coping with the grief and loss that come with leaving a country so tied to their soul.

In a way, he said, “people now feel like us ... and that brings us together.”

Members of the local Latino community introduced him to Carmen Coglio, the subject of one of the 25 portraits currently up on Acosta’s Instagram account.

Her symptoms, which lasted more than a week, included severe body aches, a fever that didn’t subside, nausea and loss of taste. She feels lucky that respiratory issues, a common side effect to the virus, never took hold.

Coglio, 63, is a week shy of a month’s recovery, and has tested negative for the virus twice, a customary protocol for clinically recovered patients.

Even then, she pushes daydreams of inviting her sons over for a Chilean dinner, complete with bistec a lo pobre, to the side. The beef tenderloin topped with fries and fried eggs would be a fitting celebration of her husband of 34 years, who died in 2018, she said. It was his favorite.

She doesn’t want to leave anything to chance.

“Thank God for technology,” she continued. “But you still crave the warmth of someone’s skin, to be able to hug each other, share a meal together ... it’s why we need to be here for each other however we can.”

Her sons still call every day. Friends, coworkers and neighbors drop off food and check in. In her recovery, she’s seen a city come together. She’s seen love manifest.

It’s a love that Acosta sees in his daughters, who, after TV stations broadcast his story, approached him in confusion.

“Oh, so you’re a REAL artist now,” his daughters said.

He just laughed in response.

As the COVID-19 pandemic upended the lives of schoolchildren across the country, a group of …

Virginia Tech President Tim Sands hinted on Friday that the university would hold classes on campus this fall, but that no final decision will be made until June.

Making sure her “I love Jesus” face mask and tiny tambourine with her name and phone number scrawled inside it were packed, Rosa Jiggetts set …