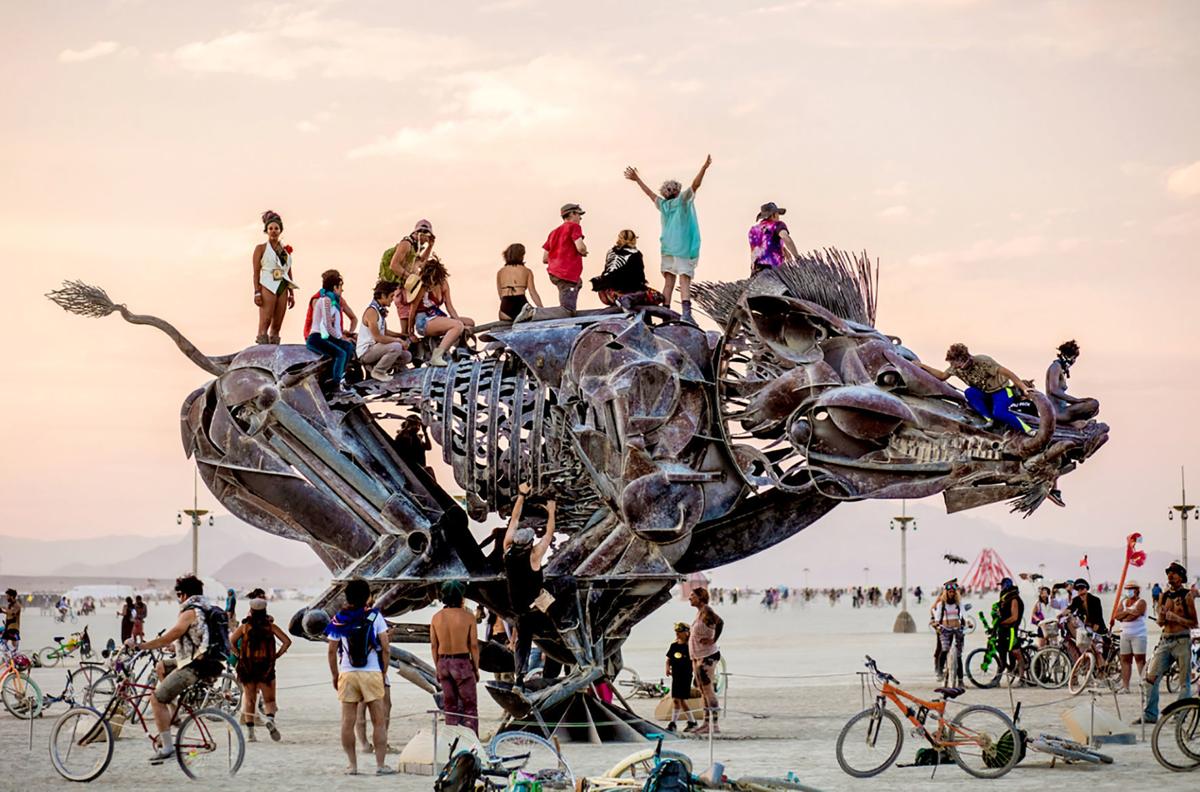 Fantastical art pieces from Nevada’s Burning Man festival have begun to show up in plazas, parks, museums and art galleries across the U.S. “Lord Snort,” the 10-ton sculpture Bryan Tedrick made for the event, is now on display at Soda Rock Winery in California’s Alexander Valley. 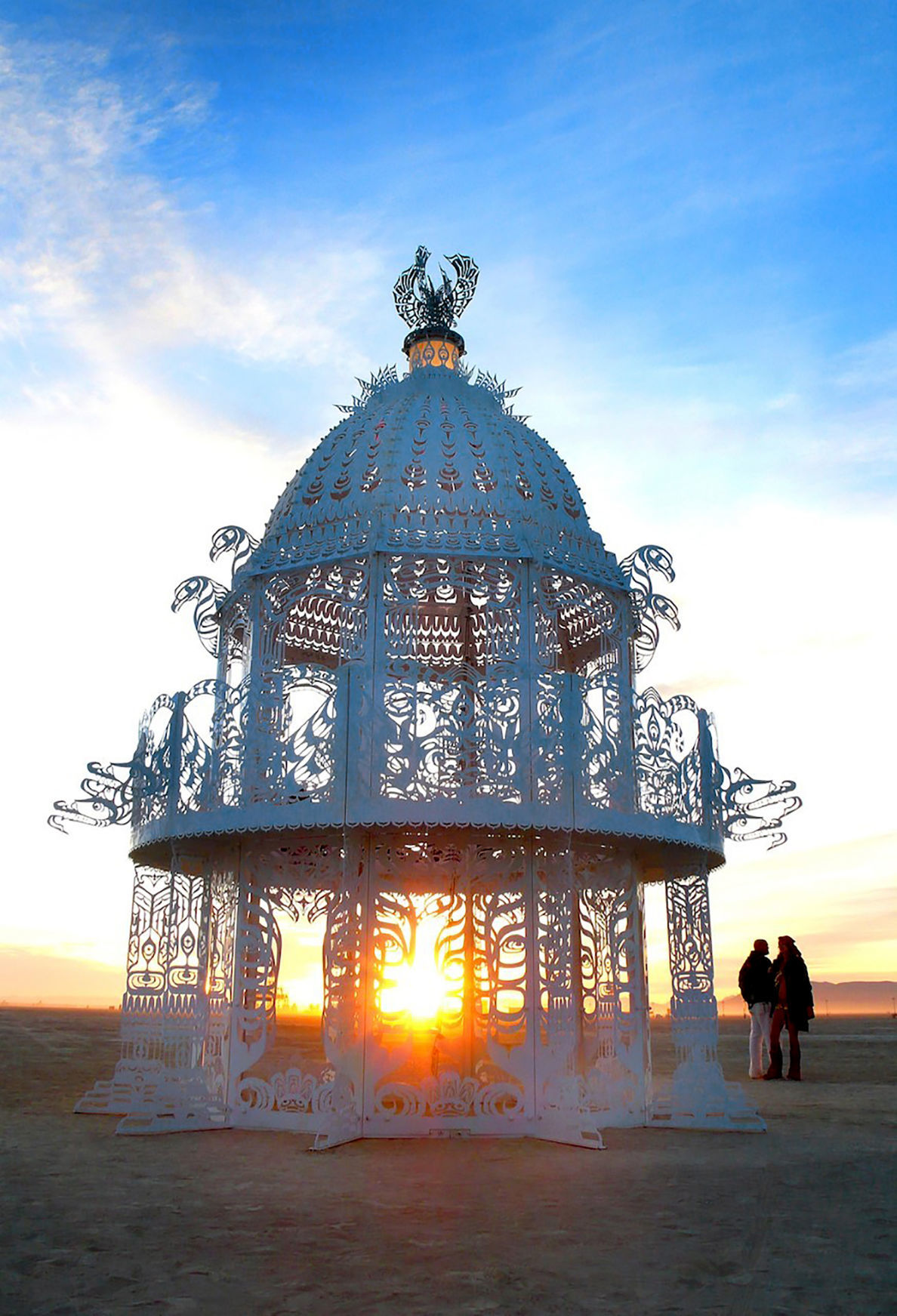 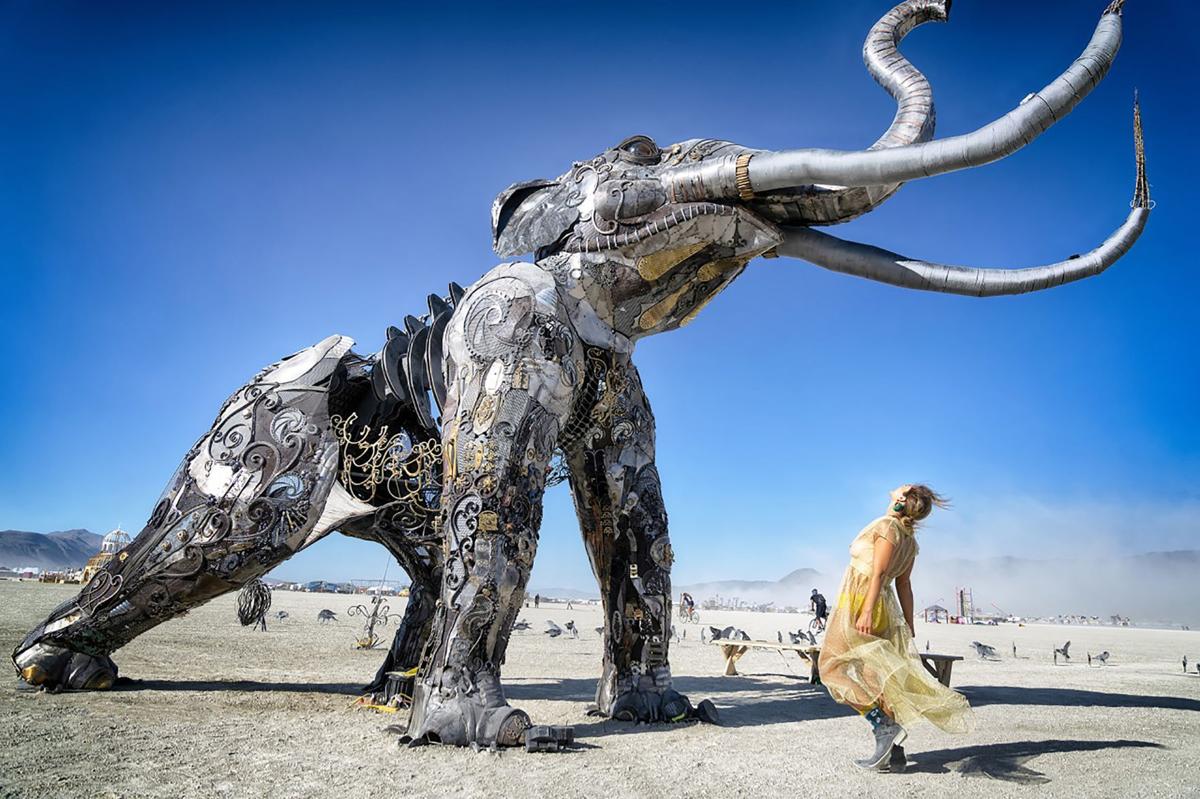 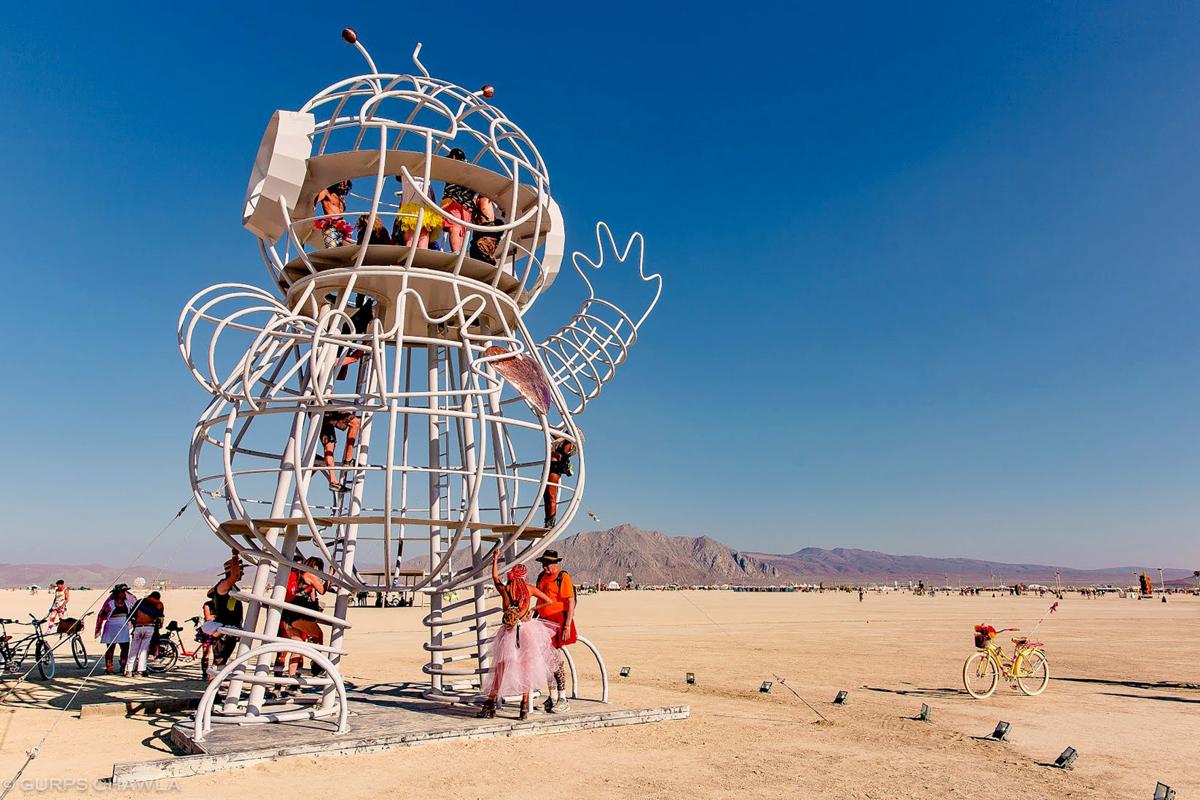 Andrea Greenlees’s “Bebot,” a 33-foot cheery robot with a devil’s tail, now waves from above Piazza Pod Park in Philadelphia.

Ever since 1986, when a small gathering of artists and friends first congregated at San Francisco’s Baker Beach to celebrate the summer solstice by igniting an 8-foot male effigy, the art of the Burning Man festival was not meant to be seen by the outside world.

Now held in Nevada’s Black Rock Desert, the event has swelled to some 80,000 people who brave dust storms and furnacelike heat each year to construct, dance and play in a pop-up city of fantastical art installations. This year’s festival featured 408 creations.

“It was one of the only places you could build these immersive interactive pieces that a few years ago were pooh-poohed by the rest of the art world,” said Michael Christian, a sculptor who has attended 20 festivals. “We never imagined our creations would be seen beyond the playa.”

And off the playa, or beach, Burning Man has over the past decade become a major influencer of popular culture, design, music and even business. The most tangible vanguard of that influence is the monumental art pieces, which, instead of disappearing into the playa, have begun to show up in plazas, parks, museums and galleries across the United States and beyond.

Given the rising number of people and art organizations exposed to Burning Man either directly or through the media (those Instagrammers!), and the rising quality and scope of the artists and art at the festival, it was inevitable that there would be a buildup of curiosity and funding to give these creations new life.

“People are now starting to build with the intention of creating pieces that will later be placed out in the world,” said Joe Meschede, civic arts coordinator at Burning Man, who helps artists get their work into public spaces once the festival is over.

Here are a few Burning Man installations to see that won’t require a hard-to-get ticket or camping skills.

“Portal” (Reno, Nevada): About a 120-mile drive from the Black Rock Desert, Reno has been the staging point for Burning Man’s biggest projects, many of which are exhibited there after the festival. The local airport, Fourth Street and the Riverwalk have been destinations, but the biggest concentration of Burner art is at the Reno Playa Art Park, which hosts a dozen pieces on rotation amid glittering casino signs. Four pieces from this year’s festival are being installed, including David Oliver’s “Portal,” an imposing, multicolored, tiled round gate suspended between two basalt pillars that one steps through, according to Oliver, “with powerful frequencies.”

“All Power to the People” (Portland, Ore.): This 20-foot-tall Afro pick, topped by a hidden platform for a view over the desert, was designed by Hank Willis Thomas, an artist whose work has been shown at the Museum of Modern Art and the Guggenheim.

“Burning Man is a great place to build something big that no one asked you to build,” said Thomas, who presented the sculpture at last year’s festival. “I was thinking of Claes Oldenburg by blowing up an item that was helpful to me when I was a kid with an Afro, and turning it into something monumental.”

Until July, the comb was sticking out of the pavement in front of The Africa Center in Harlem. Now a replica will be on display until January at the Portland Museum and will later be exhibited at the Crystal Bridges Museum of American Art in Bentonville, Ark., and the Cincinnati Art Museum.

“Monumental Mammoth” (Las Vegas): The scrap-metal “Mammoth,” resembling something Mad Max would have built had he been a zoologist, started out as a Girl Scout project by then-16-year-old Tahoe Mack.

Angered by illegal garbage dumping at the Tule Springs Fossil Beds National Monument, near her home in Las Vegas, Mack came up with a plan to recycle the garbage into a sculpture of a creature once indigenous to the area. Last year, she recruited Luis Varela-Rico and Dana Albany, metal sculptors and veteran Burning Man attendees, to weld together the 16-foot sculpture.

A steel skeleton covered by discarded car parts, rusting aluminum siding, spinning clock parts and doors that open into secret compartments, the “Mammoth” has been dusted off from its appearance at Burning Man to be permanently installed early next year at Tule Springs.

“DREAM” (Arlington, Texas): Laura Kimpton has built 17 word sculptures for Burning Man over the past two decades, and many have become some of the festival’s most Instagrammed pieces. Her words, written in what she calls “Playa Font” and stamped out in construction steel and aluminum by her ex-husband, Jeff Schomberg, deal with dyslexia (which she has), aspirations and death symbolized by the bird patterns punched out of the steel that Kimpton associates with her late father.

This year’s piece, “LOVE,” is, according to Kimpton, in “final discussions” to be installed at the World Trade Center in New York. In the meantime, her 12-foot sculpture “DREAM” can be visited outside of Levitt Pavilion in Arlington, Texas. “I was inspired to make ‘DREAM’ because, in dream life as in Burning Man, there is no social status beyond what you can create,” Kimpton said. “But I think the sculpture also fits well into Arlington’s dream of radical transformation.”

“Lord Snort” (Healdsburg, Calif.): Bryan Tedrick welded together this 10-ton, 15-by-38-foot sculpture, which swivels on a single axis and has a rotating head, as a tribute to the boars that roam the vineyards of his native Sonoma, Calif.

“It was designed so people could climb all over it,” Tedrick said. “At Burning Man, a few of them were naked and some got pinched pretty badly until they welded the head so it couldn’t move.”

The head rotates once again, but climb at your own risk: “Lord Snort” is on display at Soda Rock Winery in California’s Alexander Valley.

“Bebot” (Philadelphia): This 33-foot, cheery, chubby robot sculpture, built out of tubular steel, now waves good-naturedly above Piazza Pod Park in Philadelphia. Although “Bebot” has a prominent copper heart, its devil’s tail, discreetly curled out the back, indicates things are not as innocent as they appear.

According to its creator, London-based artist Andrea Greenlees, Bebot “questions what sort of deliberately engineered high-tech cuteness are we welcoming into our private spaces.”

“Altered State” (Wappinger, N.Y.): From a distance, this installation looks like the iconic dome of the U.S. Capitol, but as viewers move closer, they can see that it is riddled by lacy silhouettes from Pacific Northwest Native American mythology. The two-story steel structure, created by Kate Raudenbush, a long-standing Burner artist, is surmounted by a totemic eagle.

“The eagle for Native Americans Indians wasn’t the raptor bird of our Founding Fathers, but the one that flew closest to God,” Raudenbush said. Her piece is installed on the lawn of the Chapel of Sacred Mirrors, an indoor and outdoor public exhibition center.

“Most of us who build at Burning Man do it as a form of self-exploration, not to please the art establishment — even though well-established artists are now competing for space out there,” she said. “Sacred Mirrors, like Burning Man, uses art for personal reflection, so it has found a perfect new home.”

Fantastical art pieces from Nevada’s Burning Man festival have begun to show up in plazas, parks, museums and art galleries across the U.S. “Lord Snort,” the 10-ton sculpture Bryan Tedrick made for the event, is now on display at Soda Rock Winery in California’s Alexander Valley.

Andrea Greenlees’s “Bebot,” a 33-foot cheery robot with a devil’s tail, now waves from above Piazza Pod Park in Philadelphia.