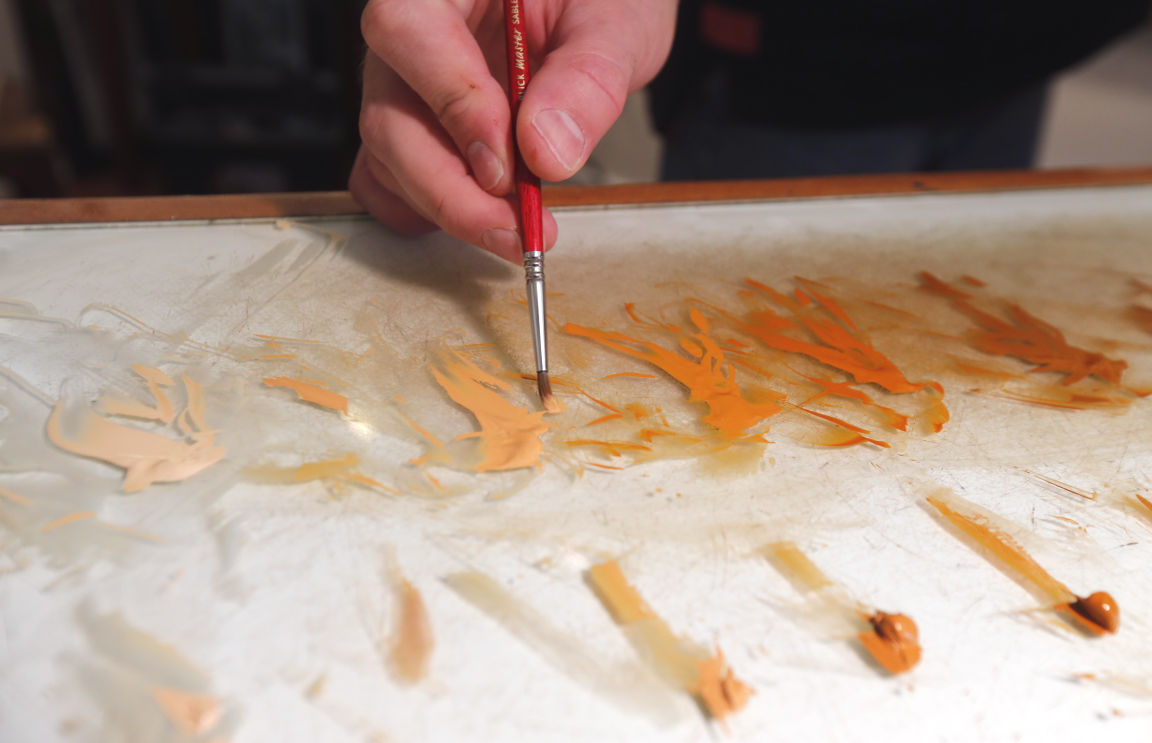 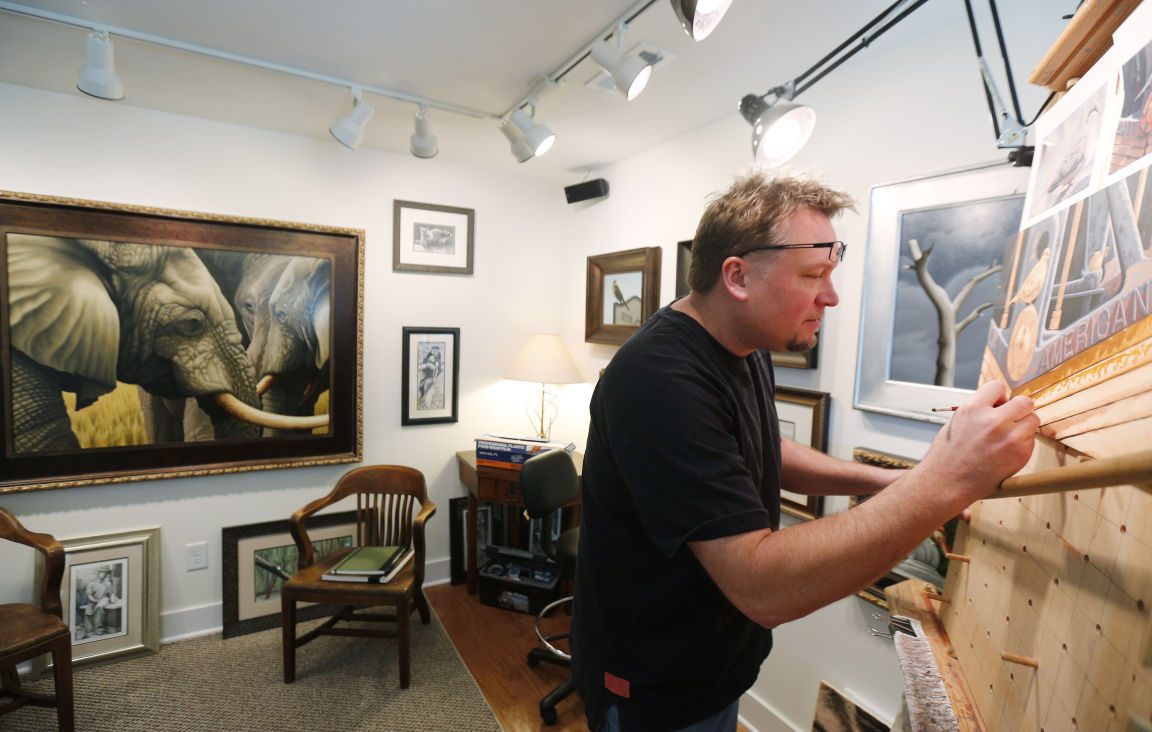 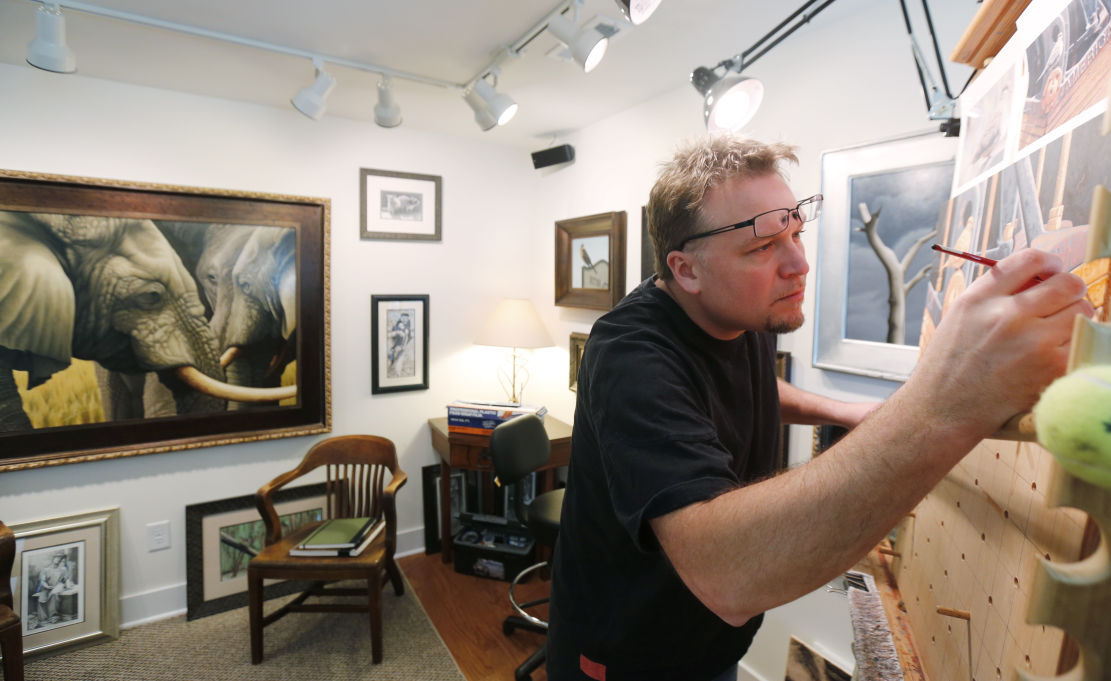 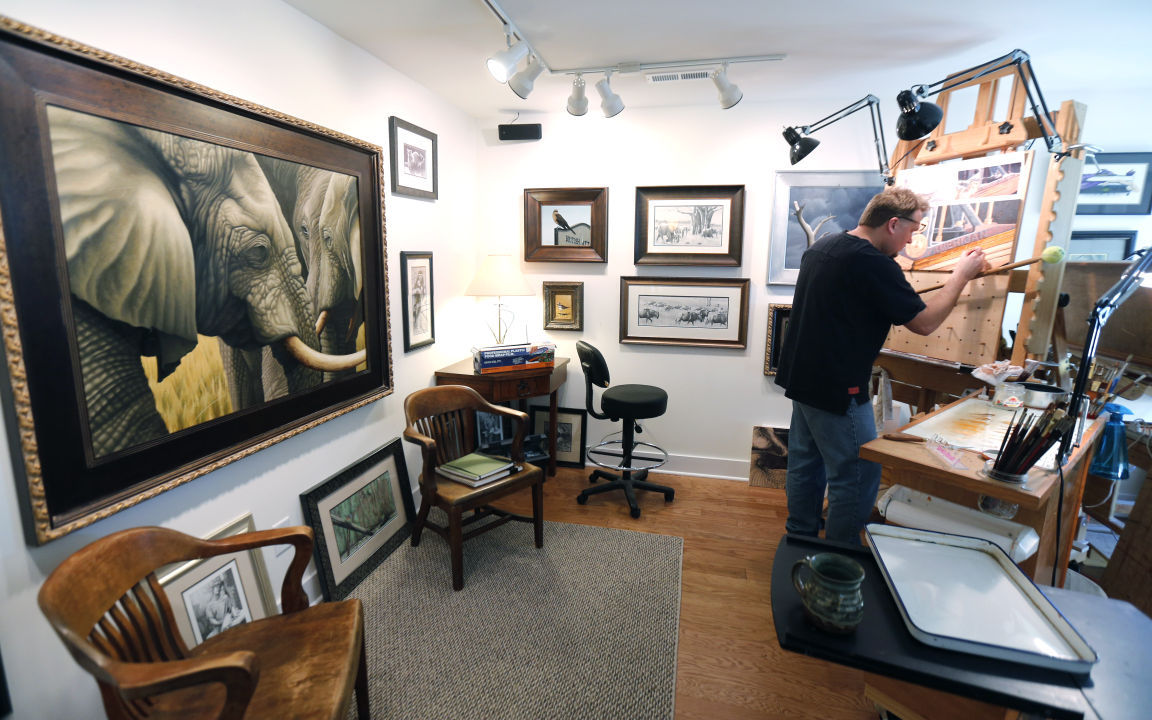 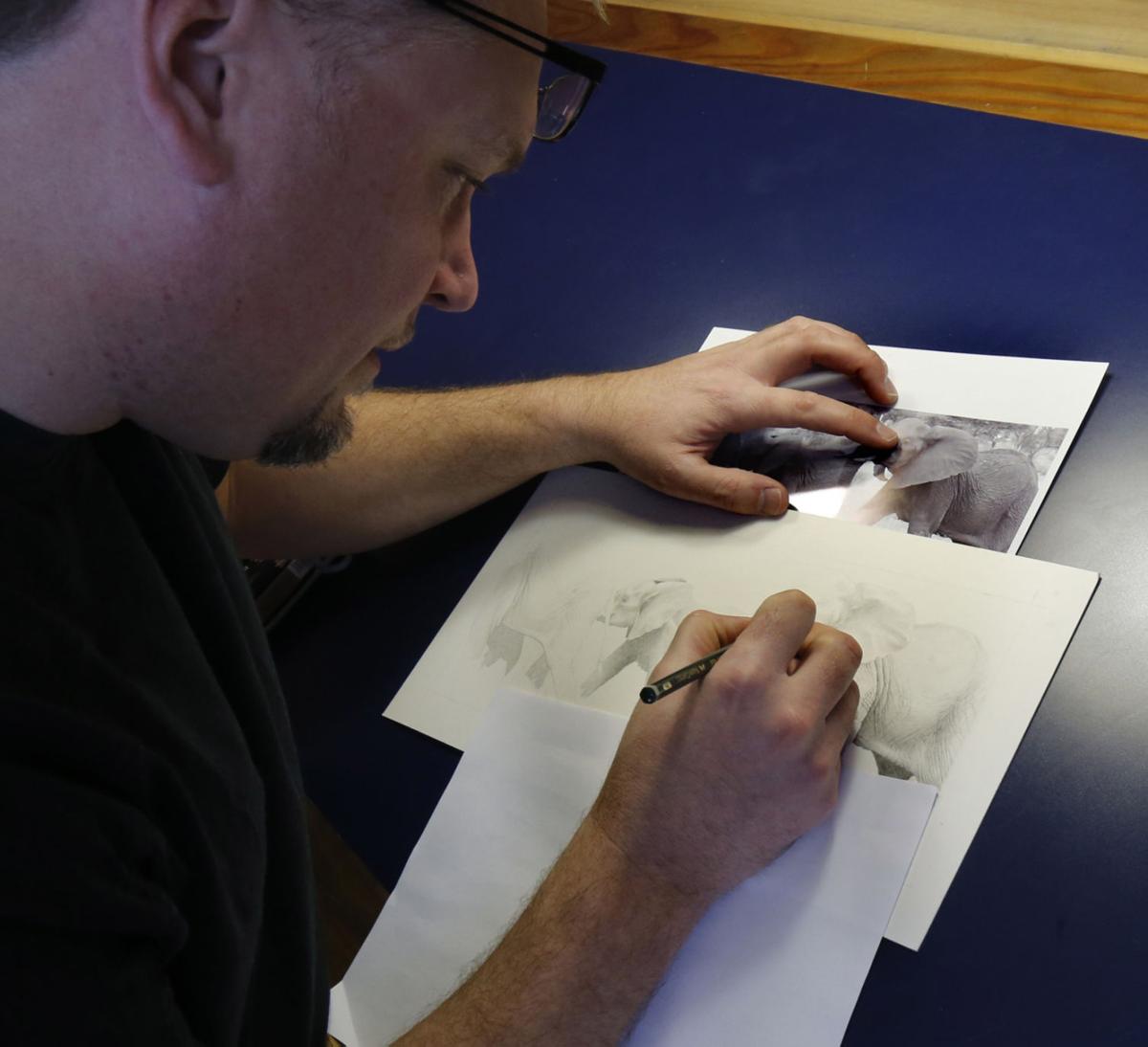 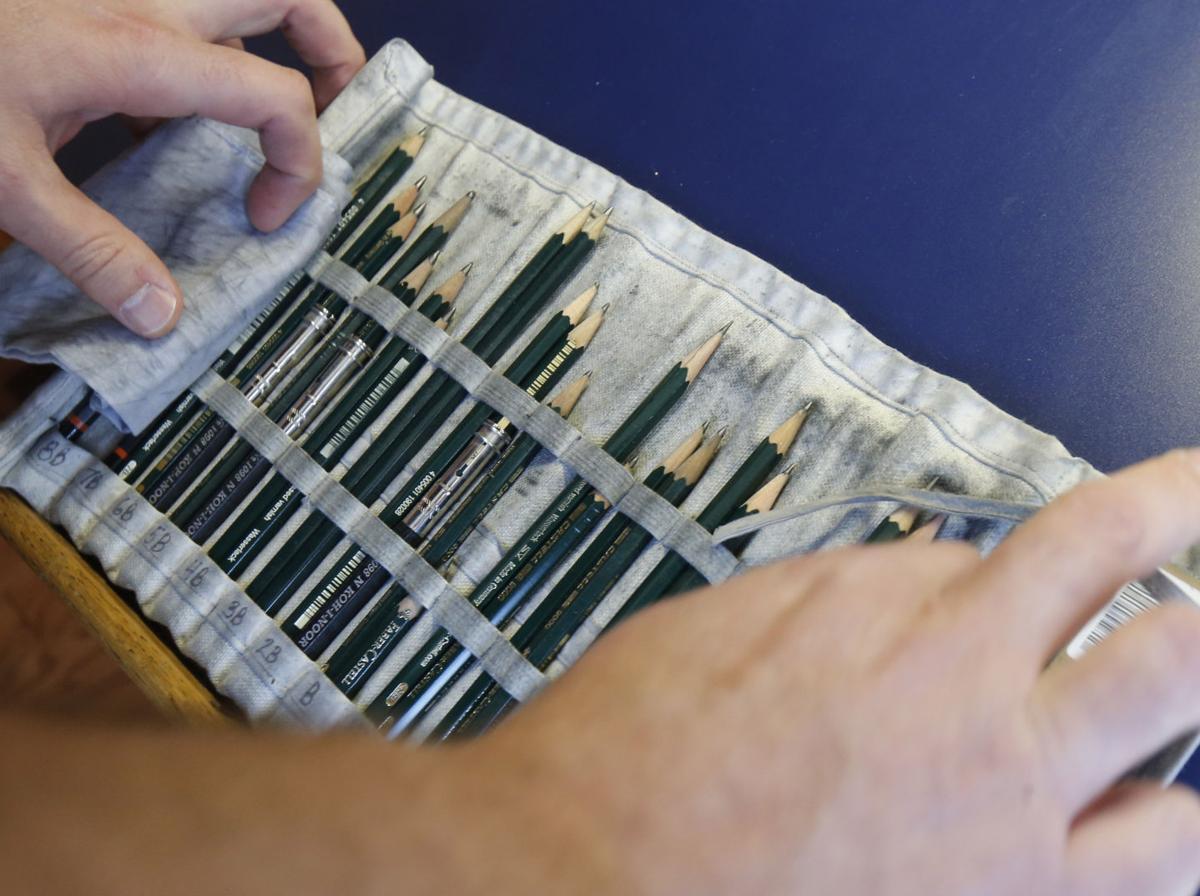 Wildlife artist Robert Louis Caldwell in his home studio in Chesterfield County. All of his works, including oils, start out as graphite drawn with the utensils unwrapped here. 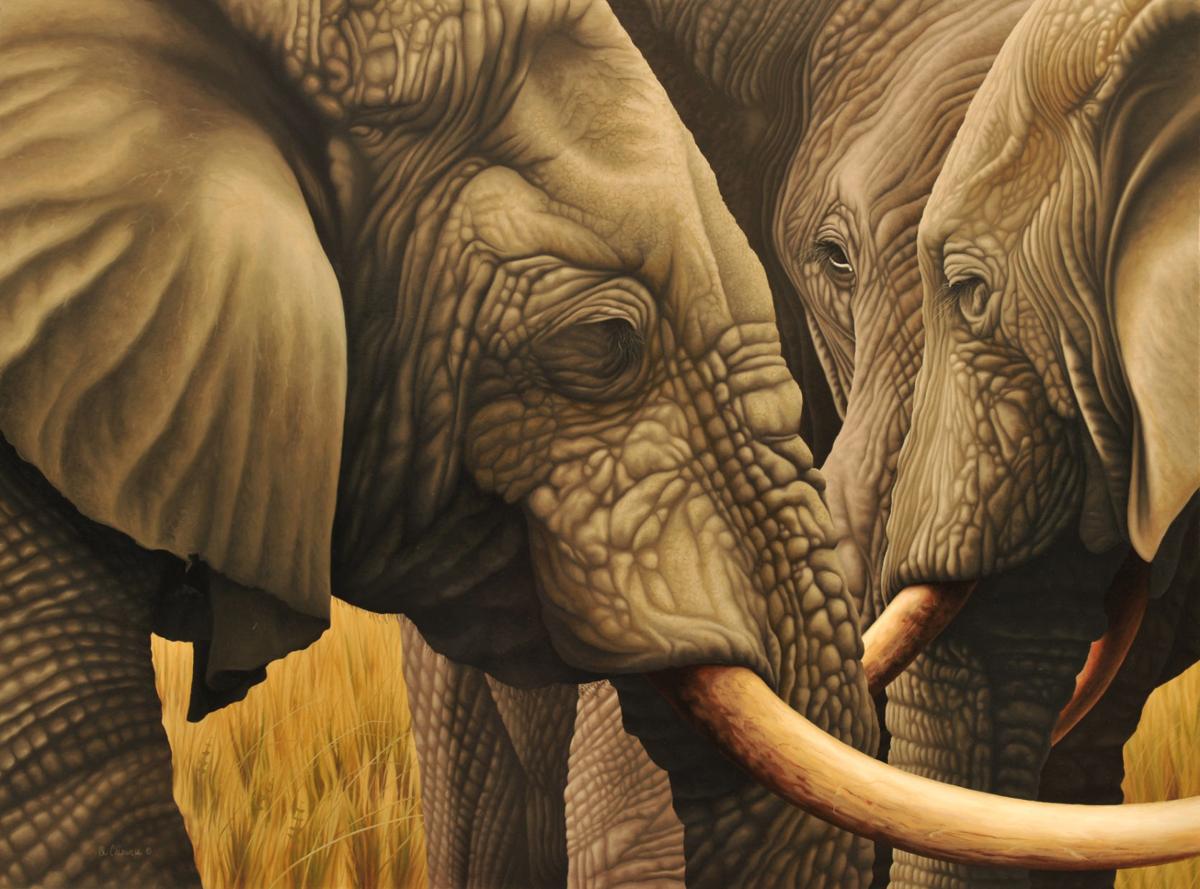 FRIDAY: Robert Louis Caldwell's first RVA solo exhibit opens with a reception and presentation by the artist who will discuss how his travels to Tanzania changed his art. 6:30-9:30 p.m., Friday, Feb. 5, at Richmond Times-Dispatch, 300 E. Franklin St. Park free in RTD deck. 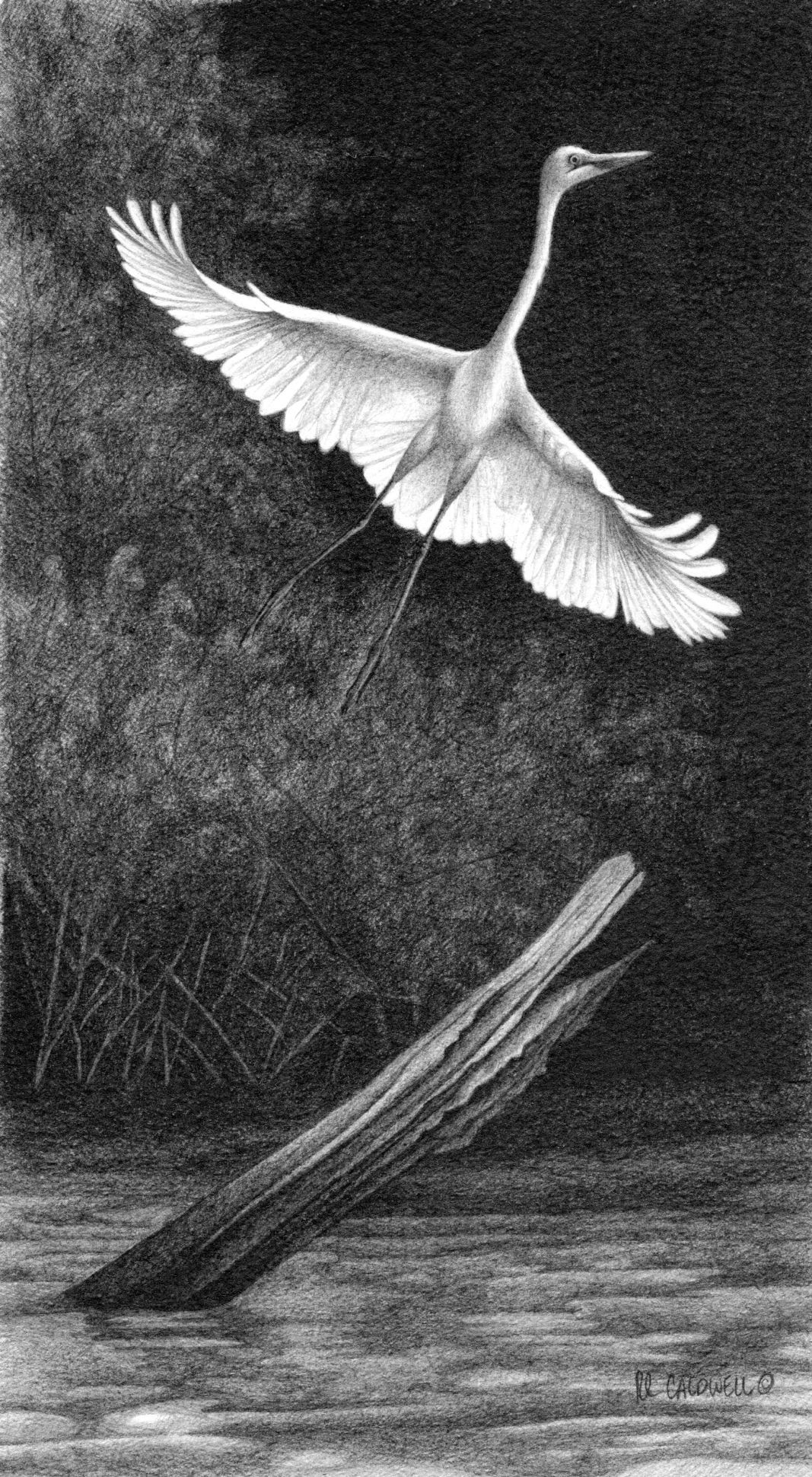 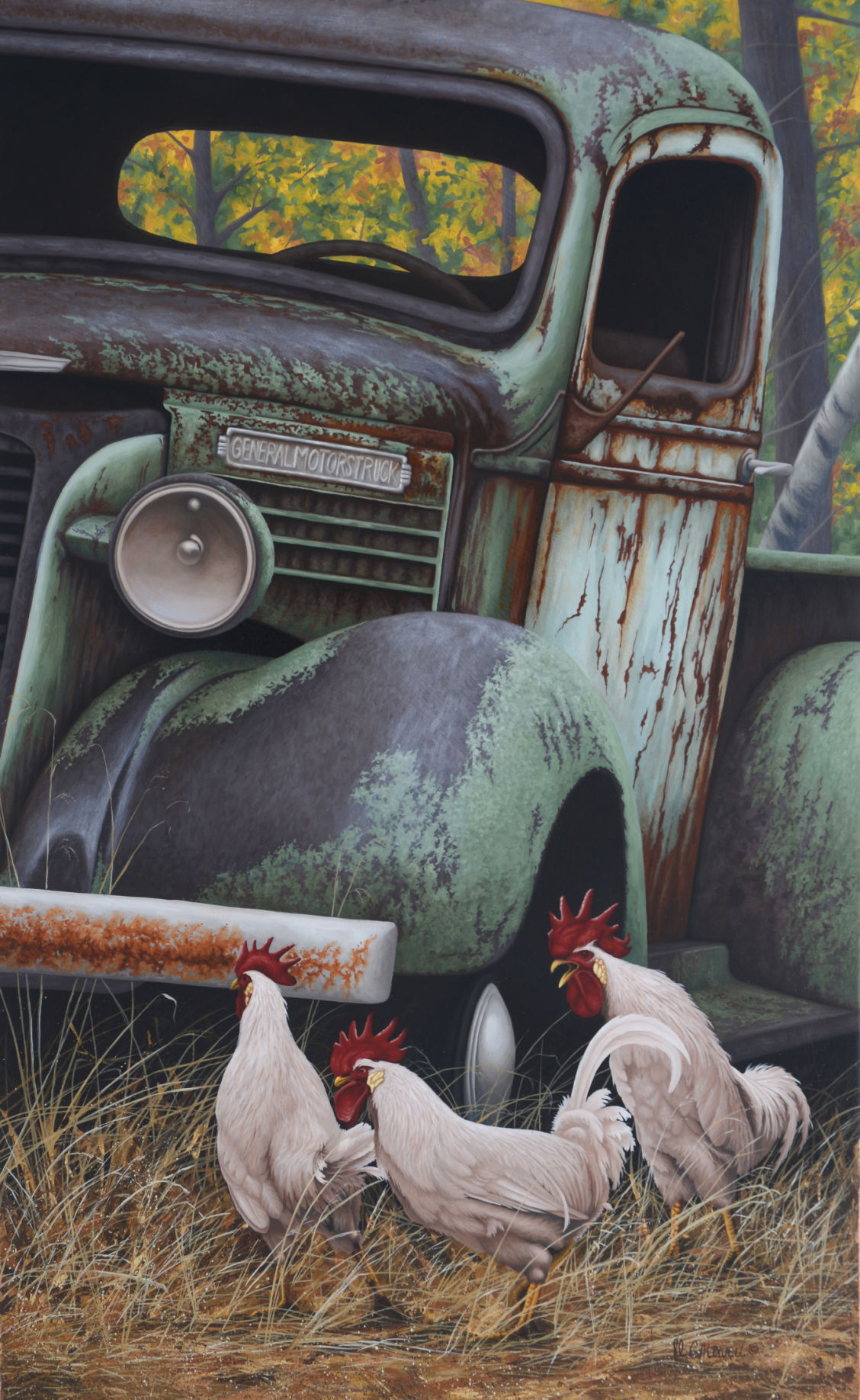 "The Generals" by Robert Louis Caldwell 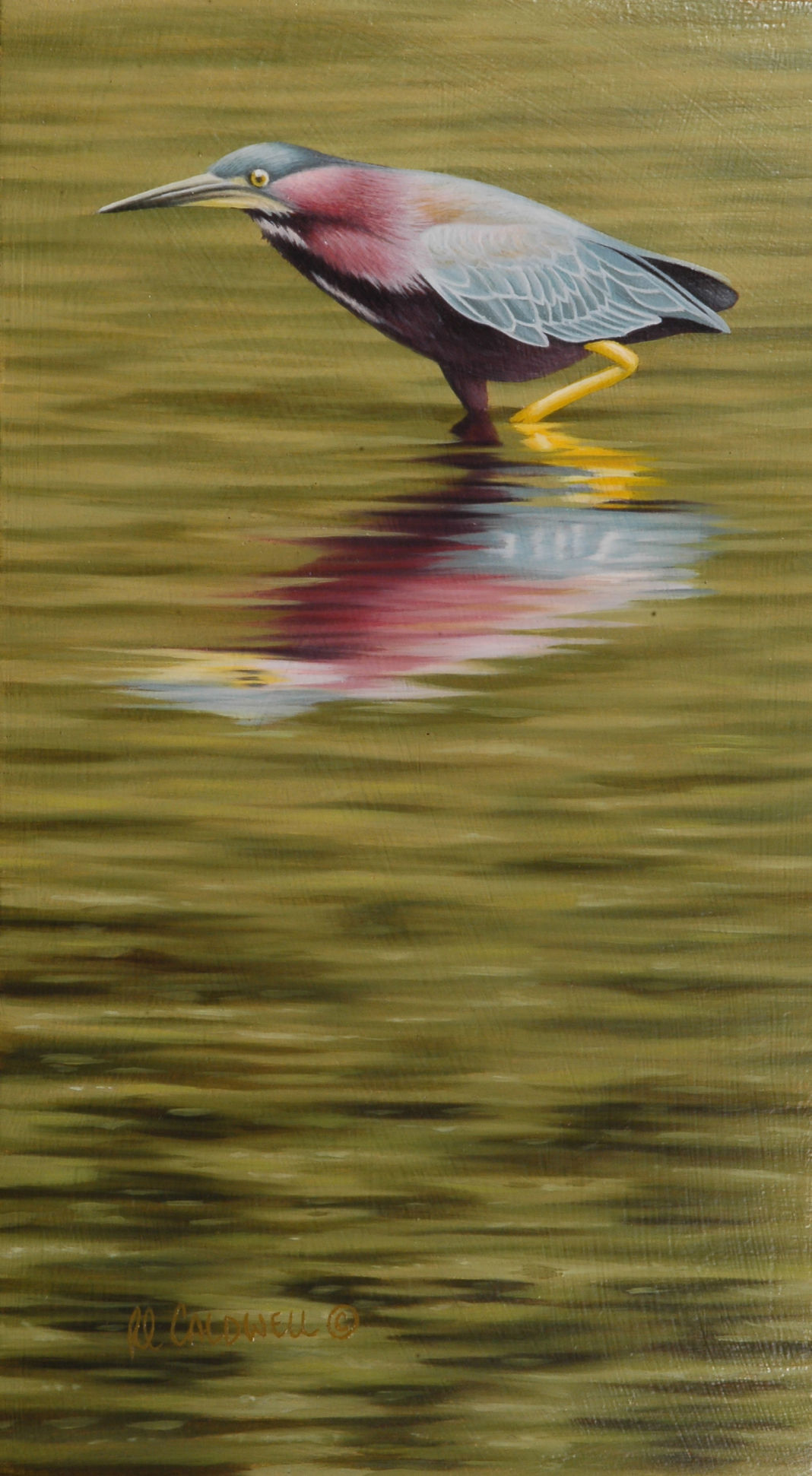 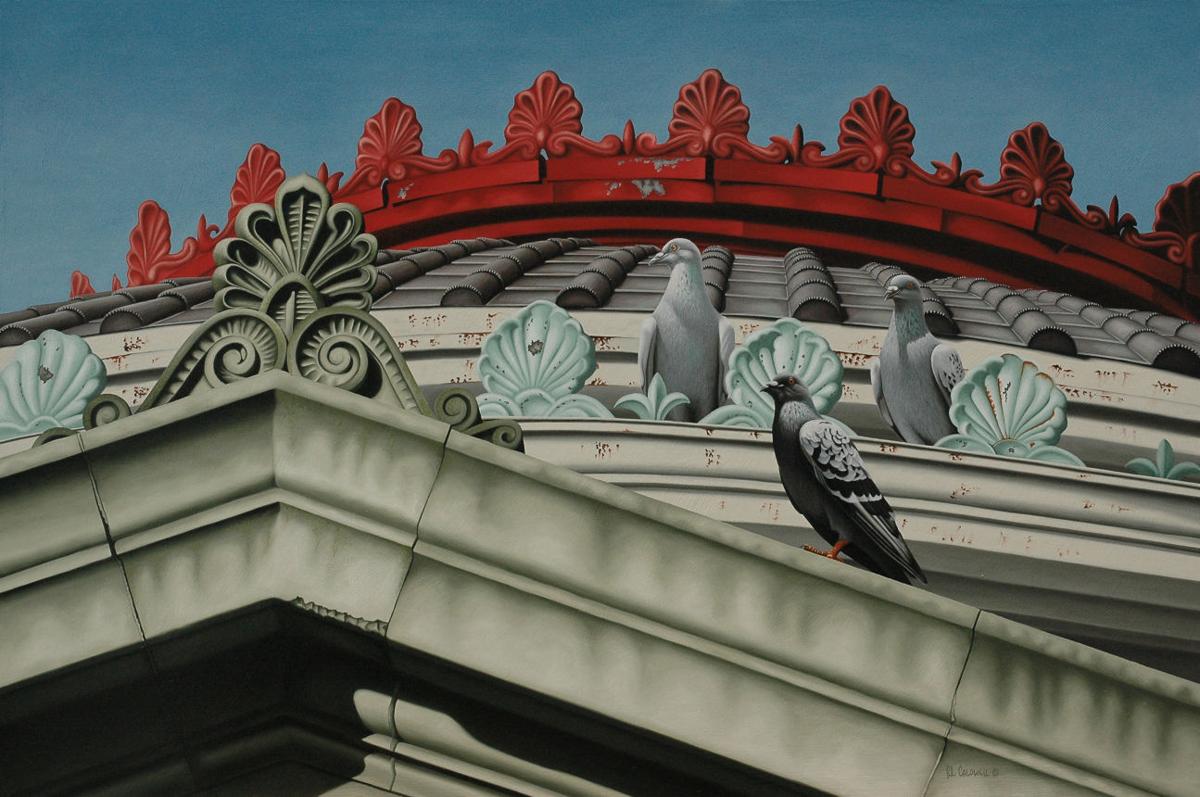 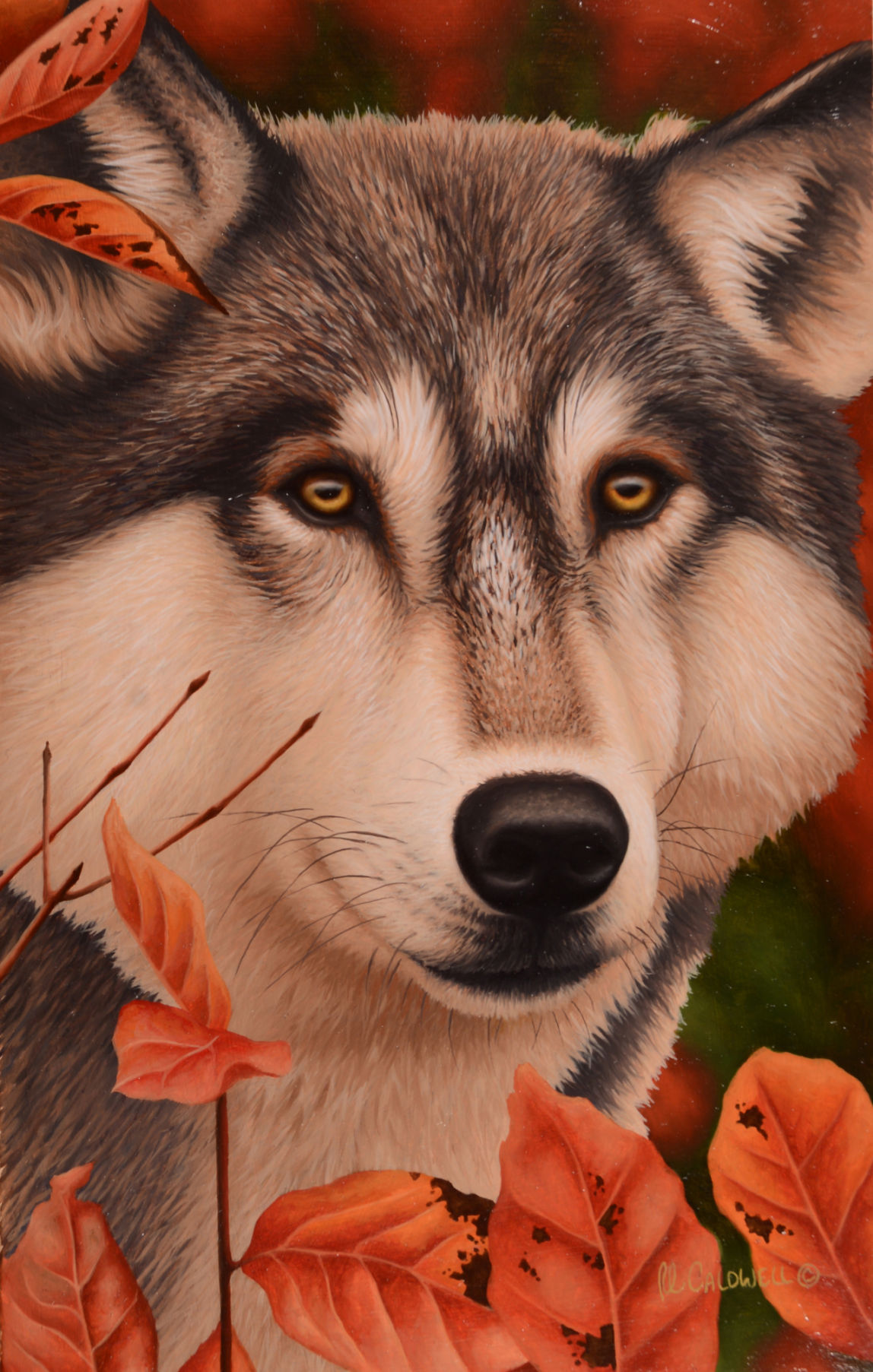 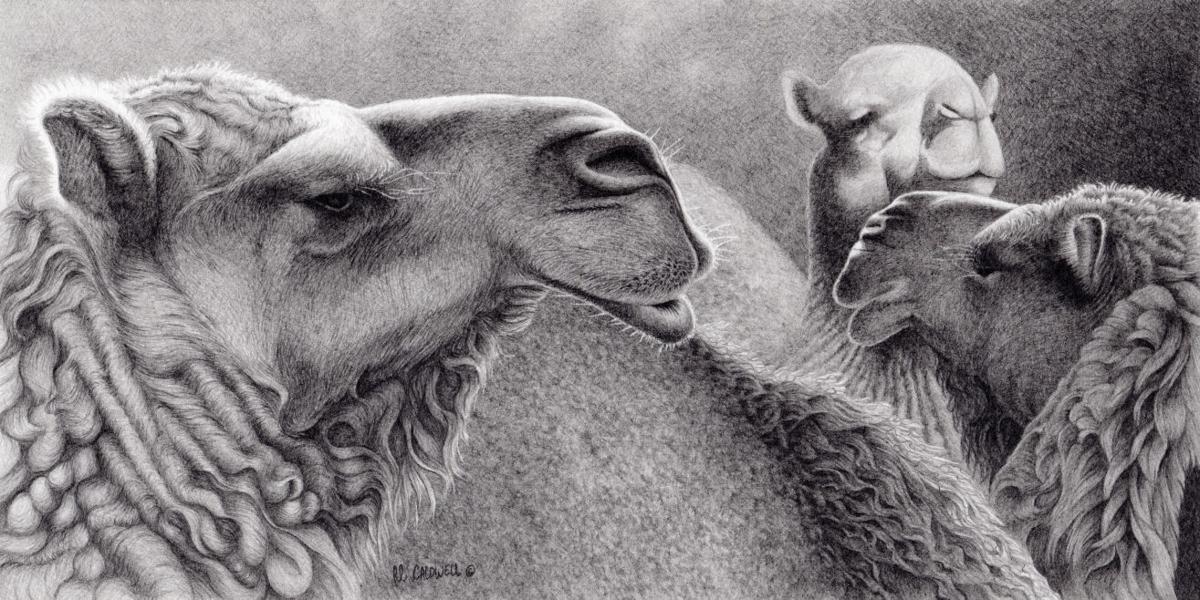 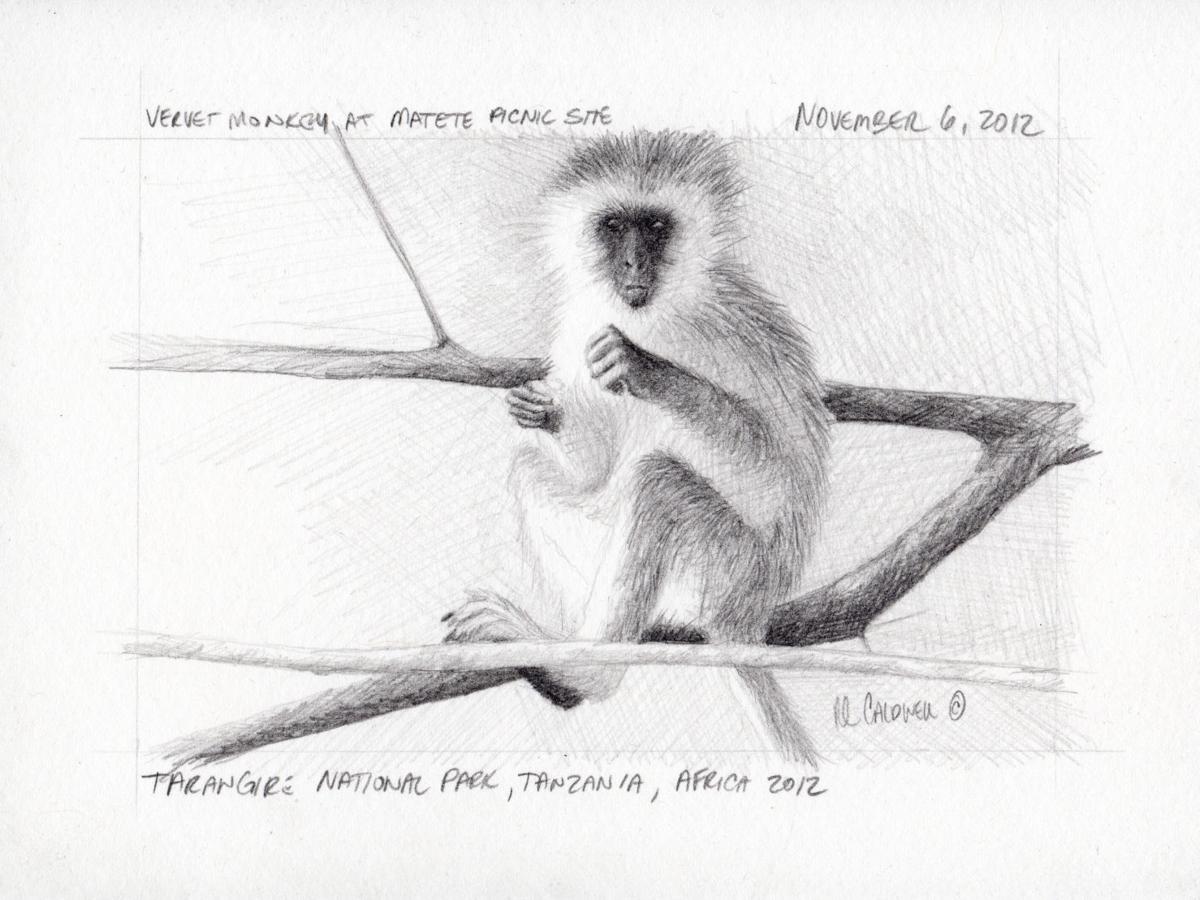 Robert Louis Caldwell sat still for a moment, a look of quiet contemplation masking the mischievous smile that was to come.

He’d been asked about the choice of subjects for the illustrations and paintings that have made him one of the most successful artists in his field.

His body of work includes animals and architecture but almost no people.

“Wildlife doesn’t have an opinion on what a finished piece looks like,” he said as the smile spread across his face.

Which is a shame, really, because Caldwell’s animals — from the most innocent birds to roaring lions — are stunningly beautiful. His drawings and paintings have the detail of photographs.

He’s a master of tone and value, building his work layer by layer first with pencil, and then often over that with oil, giving the pieces depth that render the work nearly lifelike.

“His work has a full-scale drawing underneath it. Collectors don’t see that, because he paints right over it, but it proves his attention to detail.”

The mystery of Caldwell’s career is that it has flourished while he has lived in near anonymity in his adopted hometown.

The 43-year-old artist has lived here since his days as a student in Virginia Commonwealth University’s School of the Arts, but he’s just now preparing for his first solo exhibition in Richmond.

More than a dozen of his works, including his latest and largest painting to date — a 36-by-48-inch piece of three elephants — will be on display at the Richmond Times-Dispatch beginning Friday, Feb. 5.

The show will be the newspaper’s second tied to First Fridays, the monthly downtown arts walk. The first was in December with furniture maker Sam Forrest. Similar exhibitions will be held monthly throughout 2016.

For Caldwell, hometown recognition has come mostly through the classes he teaches. Every Tuesday and Thursday, he shares drawing and painting techniques with 70 students. He also has written and illustrated a book, “Draw Realistic Animals: Wildlife, Pets & More,” which was published by North Light Books.

He works on his art on Mondays, Wednesdays and Fridays, and devotes his weekends to his wife and children.

His work commands attention, and high prices, from serious collectors, but Caldwell has worked in relative obscurity.

“I’ve found it kind of difficult to show on the East Coast,” he said.

He has found a more receptive audience in the middle of the country.

He met Summers through an art show about a decade ago, and about 70 percent of his sales are now through Lovetts Gallery.

“It’s just finding the right gallery,” said Summers, whose list of artists includes Caldwell and his VCU classmate Steven Walker, a painter who now lives in Columbus, Ohio. “That’s not an easy thing to do.”

Creating collectible-quality art isn’t easy, either, but Caldwell has been a veritable machine in the past decade.

“In school, I spent my time trying to catch up to the skill level of Robert,” said Walker, a Richmond native who met Caldwell at VCU. “He’s been working his butt off for a while and has really come into his own in the last five or six years.”

Walker said he has been surprised at how hard it has been for his friend to crack the market in Richmond.

“It just seemed natural that he would do well where he lives,” Walker said. “One day, I hope the folks of Richmond realize just what kind of talent is in their own backyard.”

That talent has been honed near and afar.

Caldwell’s love of the outdoors has taken him from treks across the area to treks across Africa in pursuit of the subjects he draws and paints.

In 2012, he joined noted wildlife artist Jan Martin McGuire (and her husband, nature photographer James Gary Hines II) for a trip to Tanzania. That trip, and another after it, inspired nearly four dozen field sketches and finished paintings.

Caldwell is going back in September, leading a small group of artists to study and work in the field.

He said the trips are essential because they allow him to study his subjects in their natural settings. Most of the time, he’s taking the photographs he’ll later use as reference points.

“When I go, it’s click, click, click,” he said, pantomiming the movement of a camera across the horizon. “If I don’t need them, I can delete them later.”

He focuses the camera on anything that might prove useful in a drawing, from an entire animal to the smallest detail.

“I’m not taking photos like you might,” he said. “If I see grass, I’m getting all the detail I can.”

The trips have paid off, McGuire said.

“Robert has several strengths as an artist,” she said. “He is a damn good drawer. … It is vital and crucial, especially in something like wildlife art where getting the anatomy down is so vitally important.”

She said she thinks his pencil drawings are his best work.

“His talent for understanding values … really shines in his finished graphite work. He is able to really capture mood and texture in his drawings.

“He also has good compositional skills that make his work unique. Wildlife art can fall into cliché or cookie-cutter renditions of animals that everyone thinks will sell, all done the same, safe boring way, where an animal is placed in the center of a drawing or painting without a story or strong compositional tools used to move the viewer’s eye around.”

She said Caldwell’s work is at a high level, and she thinks his ability to reach a wider audience will come.

“Most artists have a hard time becoming successful simply because they refuse, or simply do not understand, that art is a product like everything else,” she said. “You have to understand business and marketing.

“Robert is young, and still learning. He has a sharp day-to-day business mind, is able to meet deadlines and produce work, and he is a fascinating person who is just now learning to engage with people who are looking at his art to buy.”

“He’s very efficient, and he does what he says,” Summers said. “If I say I need high-res images by a certain date, if I need art on hand two weeks before a show, I can depend on him.

“He takes care of the business end. I wish more artists were like Robert.”

McGuire said the next step for Caldwell is creating connections with collectors. That, she said, is among the hardest things for artists to learn.

“Artists are usually shy about talking about their work or themselves,” she said. “Their art after all is such a personal expression. Robert now, over the years that I’ve known him, has begun to learn to not be afraid to engage.”

“I’d say I’m established. I’m halfway up a big hill,” he said. “Think of it in terms of a roller-coaster ride: The fright is gone, and there’s the anticipation of thrills that are almost there.”

Richmond artist Sir James Thornhill, 66, will never forget the lasting impact his neighborhood firemen had on his childhood growing up on Duva…

Wildlife artist Robert Louis Caldwell in his home studio in Chesterfield County. All of his works, including oils, start out as graphite drawn with the utensils unwrapped here.

FRIDAY: Robert Louis Caldwell's first RVA solo exhibit opens with a reception and presentation by the artist who will discuss how his travels to Tanzania changed his art. 6:30-9:30 p.m., Friday, Feb. 5, at Richmond Times-Dispatch, 300 E. Franklin St. Park free in RTD deck.

"The Generals" by Robert Louis Caldwell