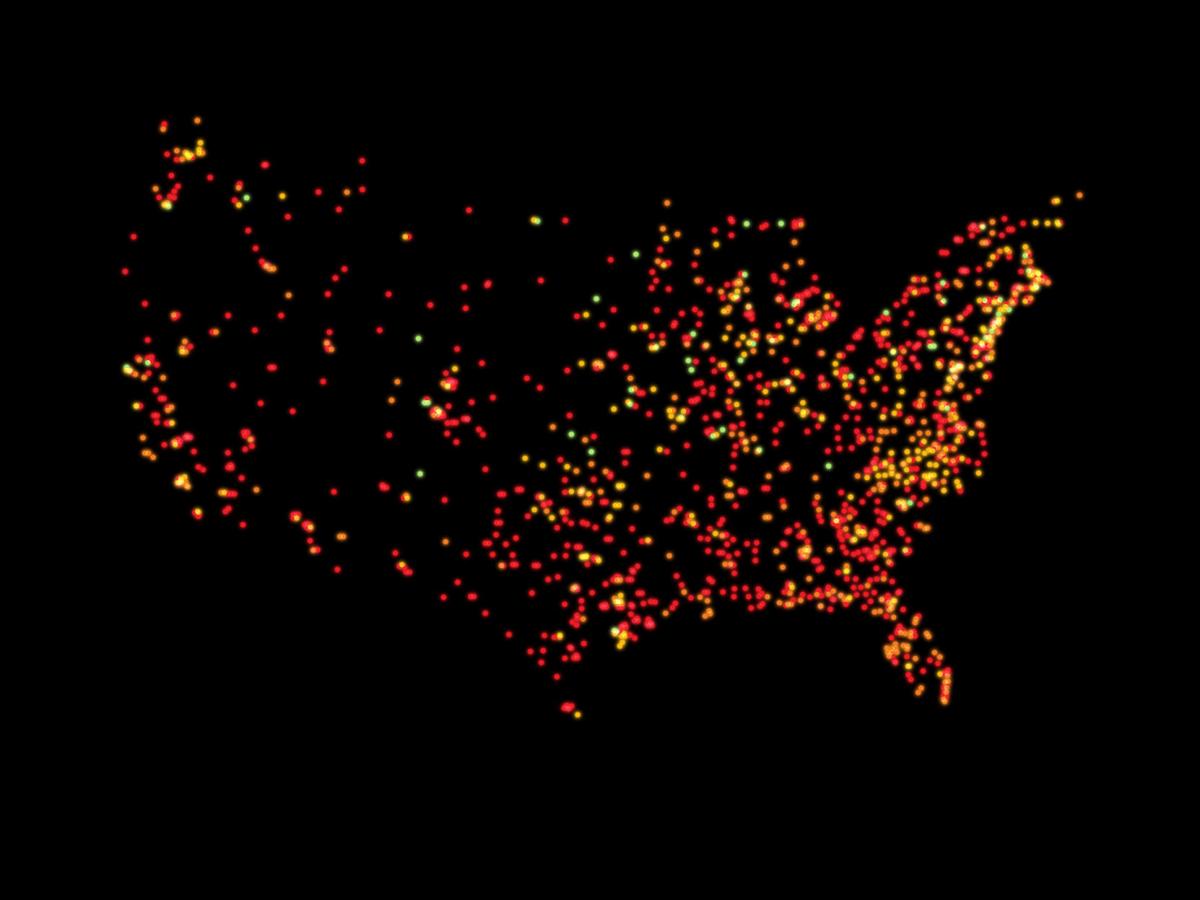 Rucker’s nearly 11-minute video “Proliferation,” on display at the VMFA until May, shows the concentration of prisons in the United States over an almost 250-year period. 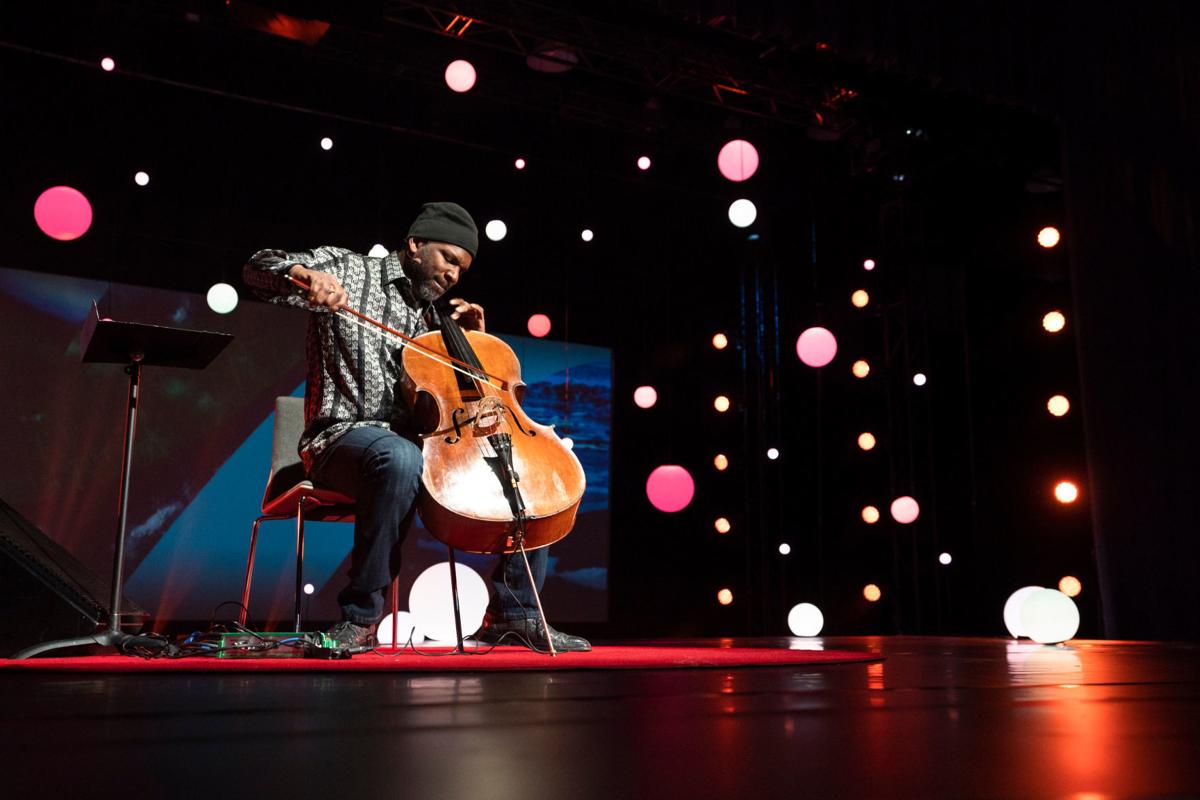 From the front row of the dimly lit Leslie Cheek Theater in the Virginia Museum of Fine Arts one Friday night, 9-year-old Geo raised his hand.

“What is lynching?” he asked.

Steps away from his signature cello on stage, visual artist, composer and musician Paul Rucker paused before putting the microphone to his lips.

“You know the guy hanging from a tree with a rope around his neck?” Rucker said, referencing an earlier part of his presentation. “There was no court case. There was no jury; there were no judges — just civilians randomly deciding they’re going to take the law into their own hands.”

The boy nodded. Rucker said he’s found throughout his career — in which he’s researched incarceration and lynching for over two decades — that children have a better understanding than most adults.

During “Artist Talk: Paul Rucker” on Friday, Feb. 21, at the VMFA, Rucker discussed his visual installation “Proliferation,” which illustrates the spread of the prison industry in the United States. On display at the VMFA since February 2019, it will remain free to view until May.

The nearly 11-minute video, set to original music by Rucker, depicts the growth of the U.S. prison system from 1778 to 2008 and how it intersects with slavery. The video begins with blinking green dots popping onto a black background to represent the locations of prisons starting in the 18th century. To show the building of more prisons over time, dots of other colors populate the space, before ending with red dots that display the addition of newer prisons. Eventually, they form the outline of a U.S. map.

The iCubed research fellow at Virginia Commonwealth University has presented the project in schools and prisons, including the now-inactive Alcatraz, since its inception a decade ago. Initially, he didn’t intend for it to be in a gallery — he wanted it used for policy change.

“We have, on average, one new prison a week since 1976. That should be disturbing to anyone,” Rucker said in a recent phone interview. “We went seamlessly from slavery to the prison system. I wanted to tell that story … something that was going to hopefully change minds.”

He added that the U.S. prison system is a $182 billion-a-year industry, a statistic confirmed by the Prison Policy Initiative, a nonprofit organization that researches mass criminalization. A single prisoner in Guantanamo Bay cost the government $13 million in 2018, according to an investigation by The New York Times, and in the U.S., black men are six times as likely to be imprisoned than their white counterparts, according to the Sentencing Project, a research center that studies the criminal justice system.

“Some of the biggest pain and racism comes from being aware of systemic and structural policies that disproportionately help one group more than another,” Rucker said. “Everyone in this room has watched communities be destroyed.”

He compiled the stats for the installation from the Prison Policy Initiative. In his work, which includes the reconstruction of various Ku Klux Klan robes that will be featured in a 2021 VMFA exhibit, the “Dirty South,” he emphasizes the importance of focusing on facts. The result: hundreds upon hundreds of hours of research.

Valerie Cassel Oliver, the curator of contemporary art at the VMFA, said Richmond is fortunate to have Rucker and the work he does. The South Carolina-born artist has allowed people to look at the history and socioeconomic factors that contribute to the prison industrial complex, she said.

“The hope is that people not only walk away with factual information, but that they’re inspired to do their own research and understanding of what these connective tissues are,” she said. “It’s to make that connection to show that issues around prison systems and the investment of the U.S. in its prison complexes is not a new construct.”

It’s occurred since the founding of this country, she added.

Erin Holloway Palmer, an East End Cemetery volunteer who went to Rucker’s talk in February, said she came to see him to hear his process in bringing painful, hidden stories to the forefront.

“I was especially struck by what he said about making the invisible visible,” Holloway Palmer said. “I feel there are [a number] of those efforts across Richmond, across the south, the country, that are trying to draw attention to this very long-neglected painful history that we don’t really learn.”

Rucker continues his life’s work of teaching American history and investigating human rights issues and how they disproportionately affect black and brown populations.

Throughout his talk that Friday night, Rucker asked the nearly 50-person audience about key dates in history, where the black Wall Streets were — Durham, N.C.; Richmond; and Tulsa, Okla. — and when the Emancipation Proclamation was ratified.

Only a few in the crowd knew the answers.

“The most enjoyable aspect about being an artist for me is to see someone go, ‘Wow, I never thought of it that way.’ And you have this shift,” he said. “I still have hope that positive things can come out of art making.”

Getting an accurate perspective is just the first step, he said.

Rucker’s nearly 11-minute video “Proliferation,” on display at the VMFA until May, shows the concentration of prisons in the United States over an almost 250-year period.