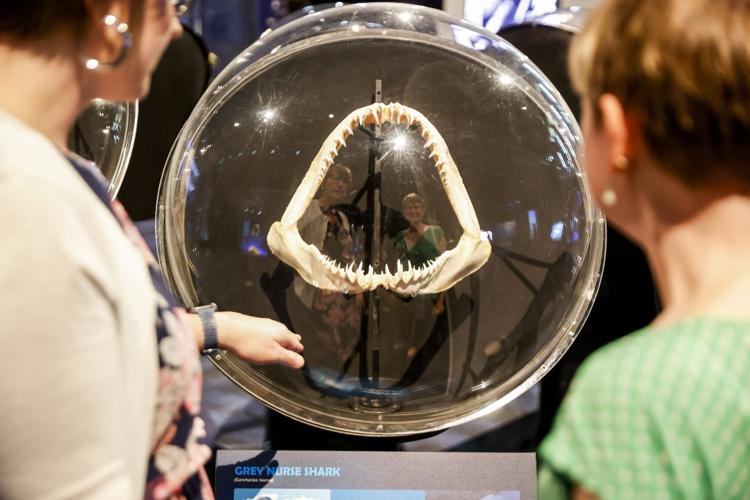 Jennifer Guild (left), a spokesperson for the Science Museum, and Timshel Purdum, the director of education, look at artifacts from the exhibit “Planet Shark: Predator or Prey.” 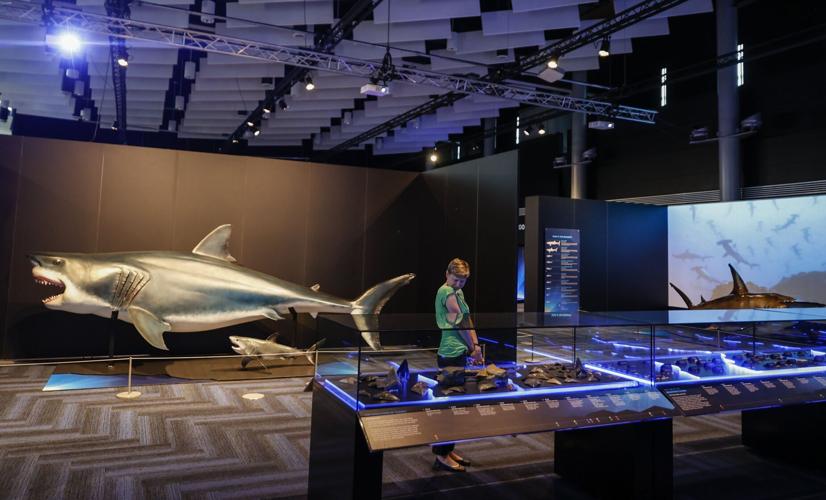 Timshel Purdum, the director of education at the Science Museum, is excited about the new exhibit and the educational value it offers. 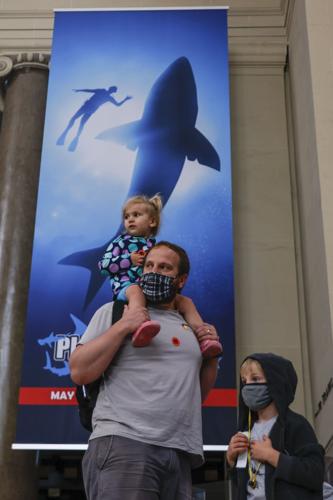 LEFT: John Richter checks out the museum with his kids, Vivienne, 1, and Johnny, 5. 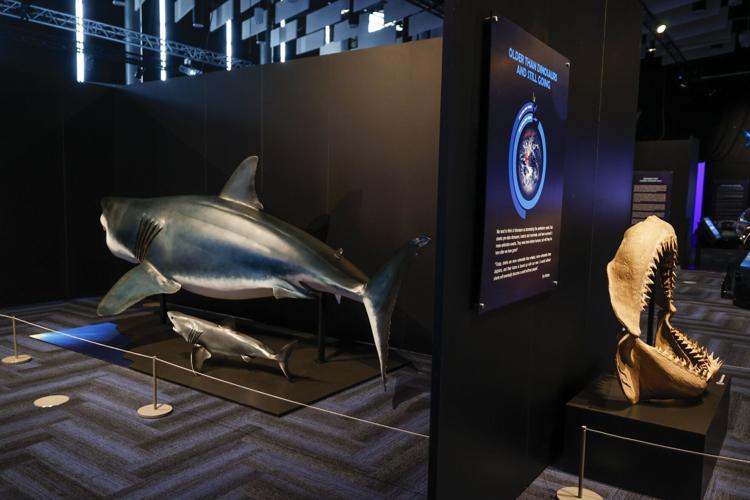 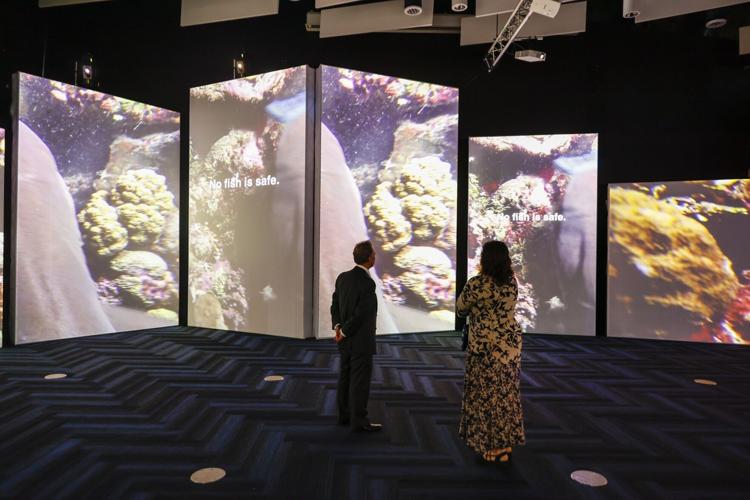 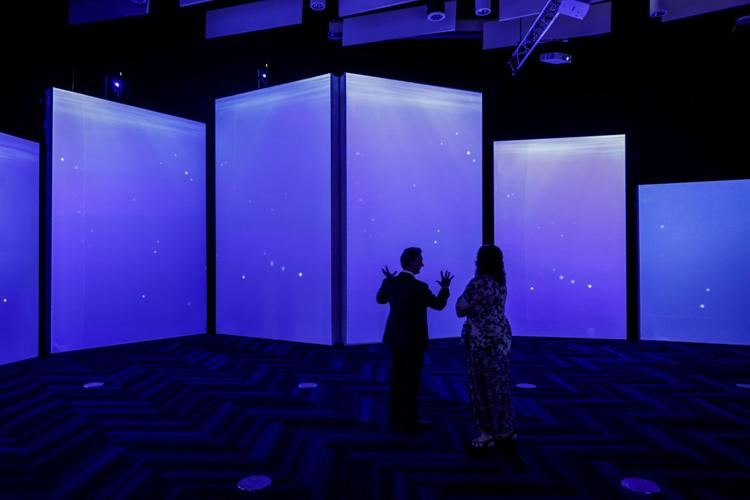 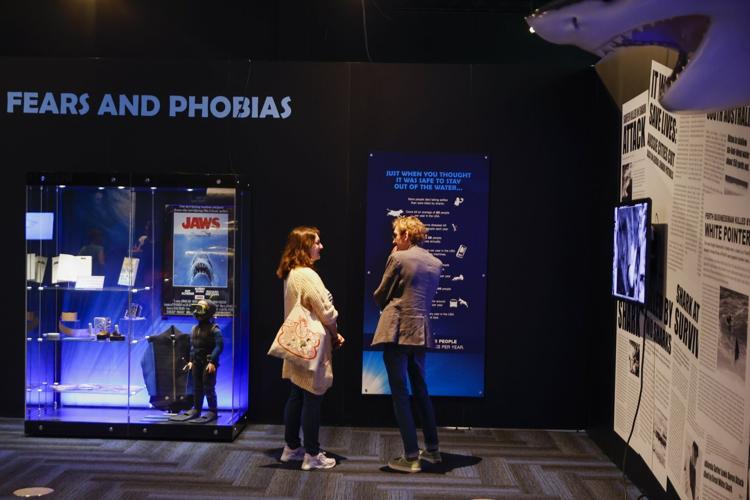 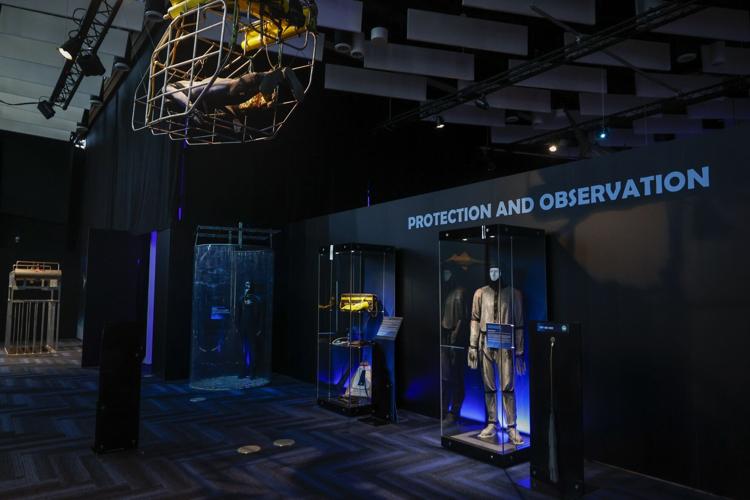 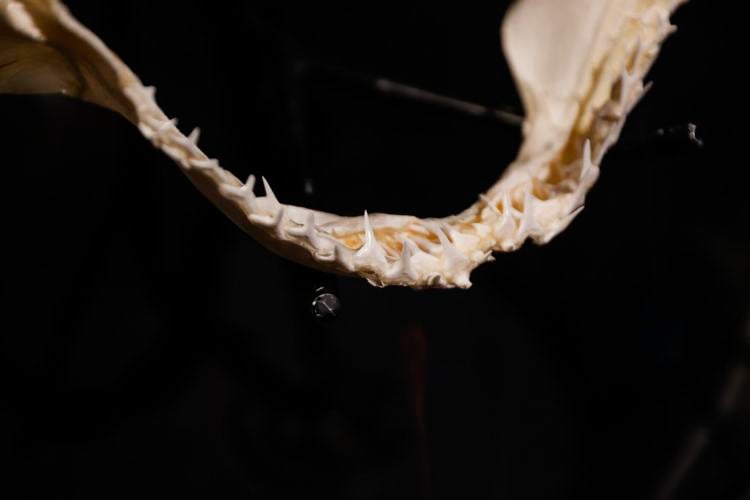 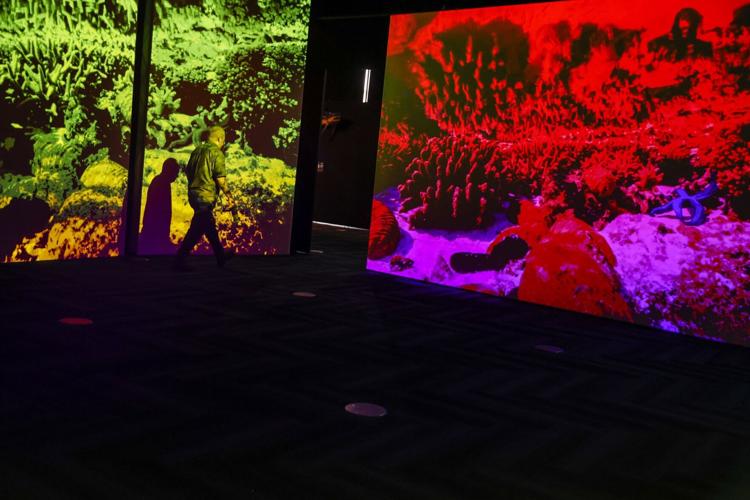 The Science Museum of Virginia is bringing the predators of the sea to Richmond this summer with the opening of a traveling exhibit, “Planet Shark: Predator or Prey.”

“What you’ll see as you walk around is a mix of actual artifacts, replica artifacts and then interactive stations,” said Jennifer Guild, a spokesperson for the museum.

Lit with blue lights and adorned with replicas of sharks, the exhibit has an underwater feel. In the SENSORY4™ immersive gallery, 11 large screens display a 45-minute film featuring underwater close-up shots of sharks and other marine life.

Timshel Purdum, the director of education, is excited about the new exhibit and the educational value it offers.

Guests can learn more about extinct and modern sharks on interactive tablets. Through this educational tool, people can see animated models of species that existed thousands of years ago.

Purdum, as a biologist, has a wealth of knowledge about sharks.

“Sharks belong to a group of animals called Chondrichthyes, and one of the things they all have in common is a cartilaginous body,” Purdum said. “So their whole skeleton is made out of the same cartilage that would be in your nose or your ears.”

According to Purdum, in 2021 only 10 people died from shark attacks, and on average the number of deaths from attacks a year is six. To contrast that statistic, the exhibit explains that an estimated 100 million sharks are killed by humans each year from overfishing, pollution and habitat destruction.

The exhibit, which runs through Sept. 5, dives in to the widespread fear of sharks that is fueled by media and pop culture. It began in 1916 when attacks off the Jersey Shore sparked panic and fear.

For the past five summers, the Science Museum of Virginia has hosted a traveling exhibit in its Dewey Gottwald Center. Courtney Moyer, the communications and curiosity director, says that when searching for traveling exhibitions, the museum looks for topics that have universal appeal.

“We try and get in exhibitions that will fit our criteria of interactive, something that we’re not covering in the museum and then we also try to vary the topics,” Moyer said.

“You’re bringing in shows that are traveling all over the world, so it’s a nice chance to get to see something you wouldn’t normally see,” Conti said. “It’s fun for us because then the whole museum can play off it a little bit.”

Weaving the shark theme throughout the museum, there is a “Great White Shark” film in the Dome and two art exhibitions: “Picturing Science,” which highlights the skeletal anatomy of vertebrate fishes; and “JARS: Sharks on Loan,” which features cartilaginous fishes from the Virginia Institute of Marine Science, according to SMV’s website.

Changing perspectives has been a key goal of the museum for the past 10 years, Conti said.

“Instead of making the museum all about science, let’s make it about things people care about and connect the science to that,” he said. “That’s been so much easier, so much more fun, and I think better. And so instead of trying to get people to come and see a chemistry gallery or go to a physics gallery, it’s getting people to come and see sharks or food or communications or sports or music, things that people are passionate about.”

“Planet Shark: Predator or Prey” is created by Grande Experiences of Australia and runs until Labor Day.

To learn more or plan a visit to “Planet Shark” at the Science Museum of Virginia, visit its website: smv.org.

The Science Museum of Virginia announced it is closer to its fundraising goal for the renovation of the green space thanks to a $500,000 donat…

PHOTOS: 'Planet Shark: Predator or Prey' at the Science Museum of Virginia

Jennifer Guild (left), a spokesperson for the Science Museum, and Timshel Purdum, the director of education, look at artifacts from the exhibit “Planet Shark: Predator or Prey.”

Timshel Purdum, the director of education at the Science Museum, is excited about the new exhibit and the educational value it offers.

LEFT: John Richter checks out the museum with his kids, Vivienne, 1, and Johnny, 5.