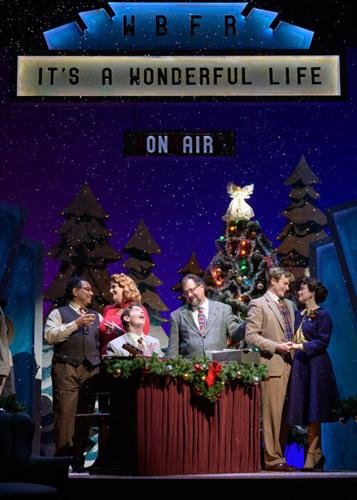 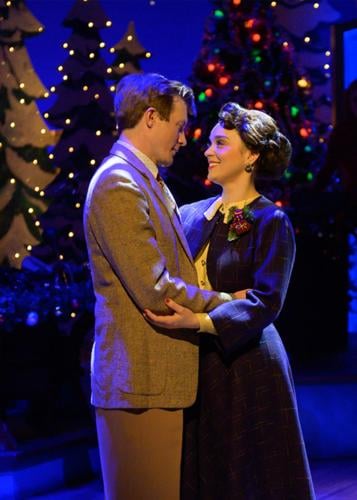 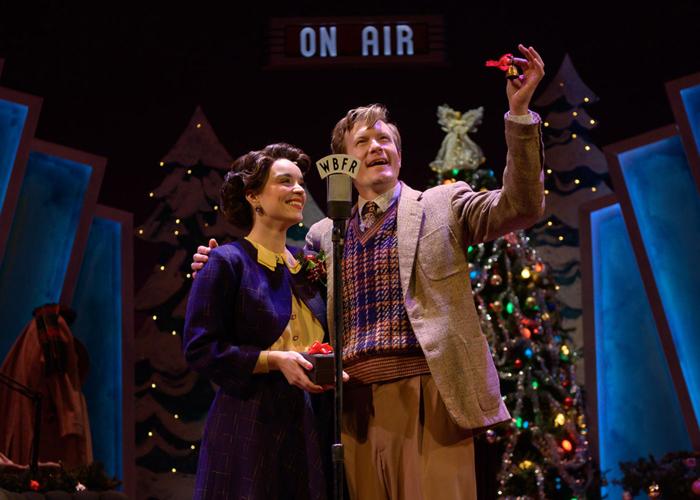 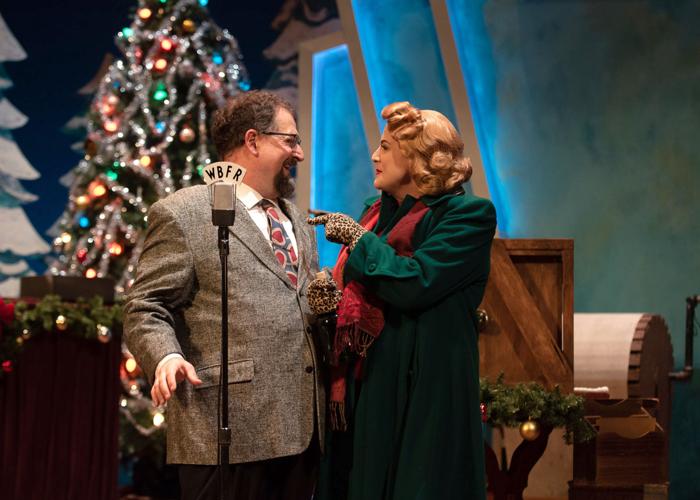 Wilson, Bavolack and their castmates act out the play and create its sound effects.

I know Frank Capra’s “It’s a Wonderful Life” is a holiday classic, but it’s also a very strange film. Put together like “A Christmas Carol” by way of “The Twilight Zone,” the Jimmy Stewart flick features suicide, near poisonings and an unexplained pet raven, among other happenings not normally associated with Christmas.

Some of these peculiar flourishes have been rounded off in Virginia Repertory Theatre’s “It’s a Wonderful Life: A Live Radio Play.” Adapted by Joe Landry, this show reworks the story of George Bailey into a live radio show a la “A Prairie Home Companion.” Taking place in 1946 — the same year the film was released — this version incorporates the audience into the experience as if the live show were being broadcast on the radio.

In this attractive, well-cast show, six actors bring to life all the denizens of Bedford Falls, a sort of Mayberry where the evil robber baron Mr. Potter rules the town with an iron fist. The only one capable of standing up to Potter is George, a good man who once dreamed of seeing the world, going to college and becoming an architect or urban planner, but instead heeded the call of family and community to stay in Bedford Falls and run the savings and loan his father founded. The financial institution is the only way to obstruct Potter’s dominion over the town.

Through Potter’s machinations, George is driven to commit suicide on Christmas Eve until he is interrupted by his guardian angel and shown what the world would be like if he had never been born.

Kurt Benjamin Smith stars as Jake Laurents, the radio actor playing the George Bailey role. Bringing the same charisma and old-fashioned charm that he did to the titular role of Quill Theatre’s “The Great Gatsby” in early 2020, Smith excels in the role. This isn’t a criticism, but if Smith isn’t doing a full-on Jimmy Stewart impression, he certainly embraces many of his vocal ticks and phrasings.

Smith receives deft support from his castmates — who physically act out the play, create its sound effects and play piano — in bringing this tale to life. As Sally Applewhite, the radio actress playing George’s wife, Mary, Anna da Costa is charming with the somewhat limited “perfect spouse” role the script gives her. Fellow cast members Joshua Mullins, William Anderson and Bo Wilson deftly jump from character to character, but Maggie Bavolack shines in particular, toning down her natural comedic gifts to portray a variety of midcentury women; they sound as if they were piped in from movies of the period.

Presented without an intermission, things speed right along under Chelsea Burke’s direction, but there are moments, especially early on, where it isn’t always clear what is taking place or where a scene is located. This includes a moment late in the show where George visits the Bizarro World version of his home and tussles with a police officer.

But the biggest problem of the show is that it’s hard to see all the live Foley work that the actors are doing to bring the story to life. Half the fun of seeing a live radio show is watching all the actors create the sound effects right in front of you. Unfortunately, much of this action takes place on tables behind the main action; perhaps moving the standing microphones toward the wings would help reveal some of this work.

Trimmed to its essence and smartly staged, Virginia Rep’s “It’s a Wonderful Life” is a pleasant evening of theater, and a good reason to get out of the house.

Rich Griset is a Richmond-based journalist who has written for Fortune, Virginia Business and Style Weekly. His Twitter handle is @RichGriset.

In trying to come up with a way to properly celebrate its upcoming 50th anniversary, Virginia Opera sought to commission an opera, one that al…

“Never before has Broadway In Richmond presented nine musicals in a single season,” organizers said in a statement.

When a show is as popular as “Wicked,” there are heightened audience expectations, says actor John Bolton.

Wilson, Bavolack and their castmates act out the play and create its sound effects.