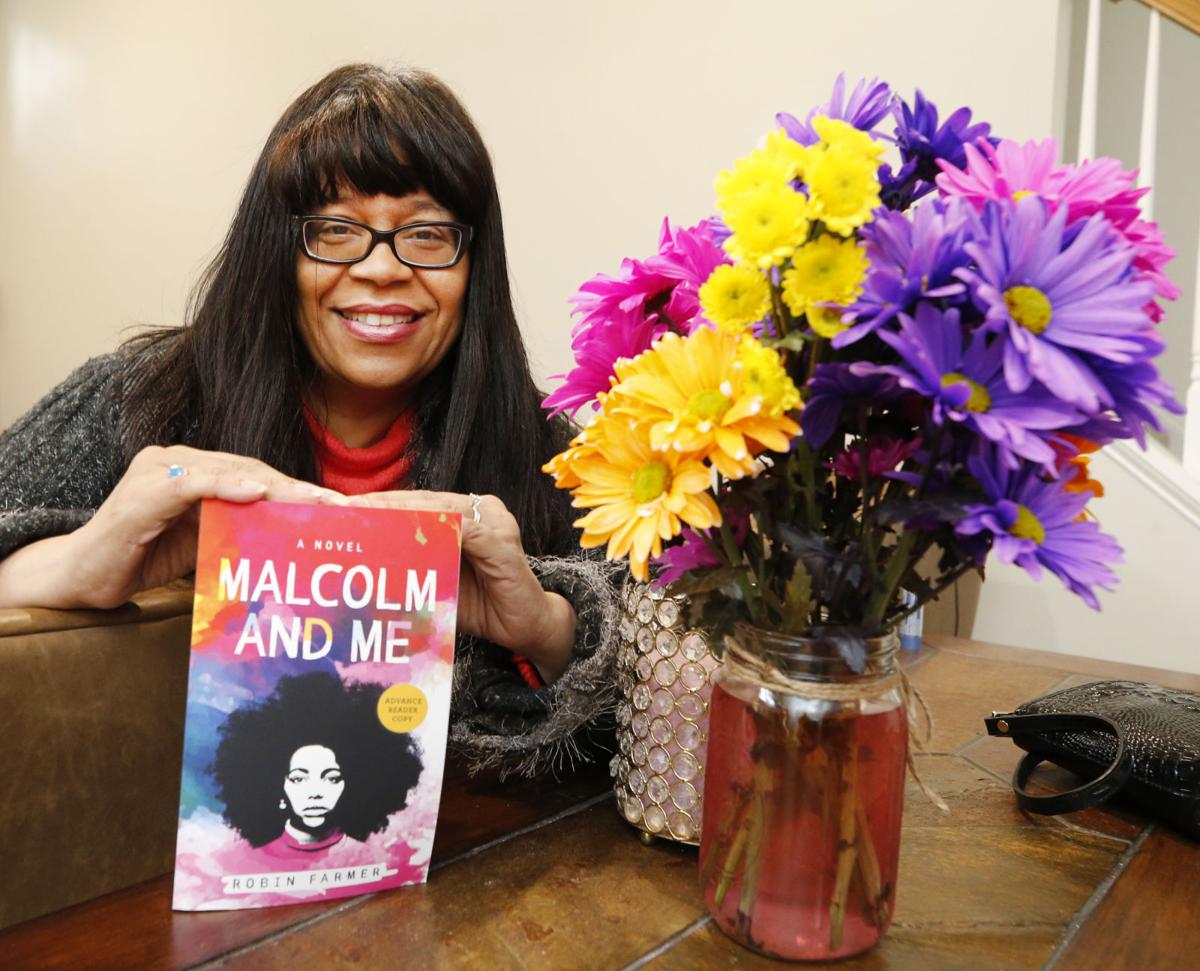 Author Robin Farmer is photographed with her just-published book, Malcolm and Me. The bouquet was sent by a neighbor who matched the flowers to the colors of the book cover. 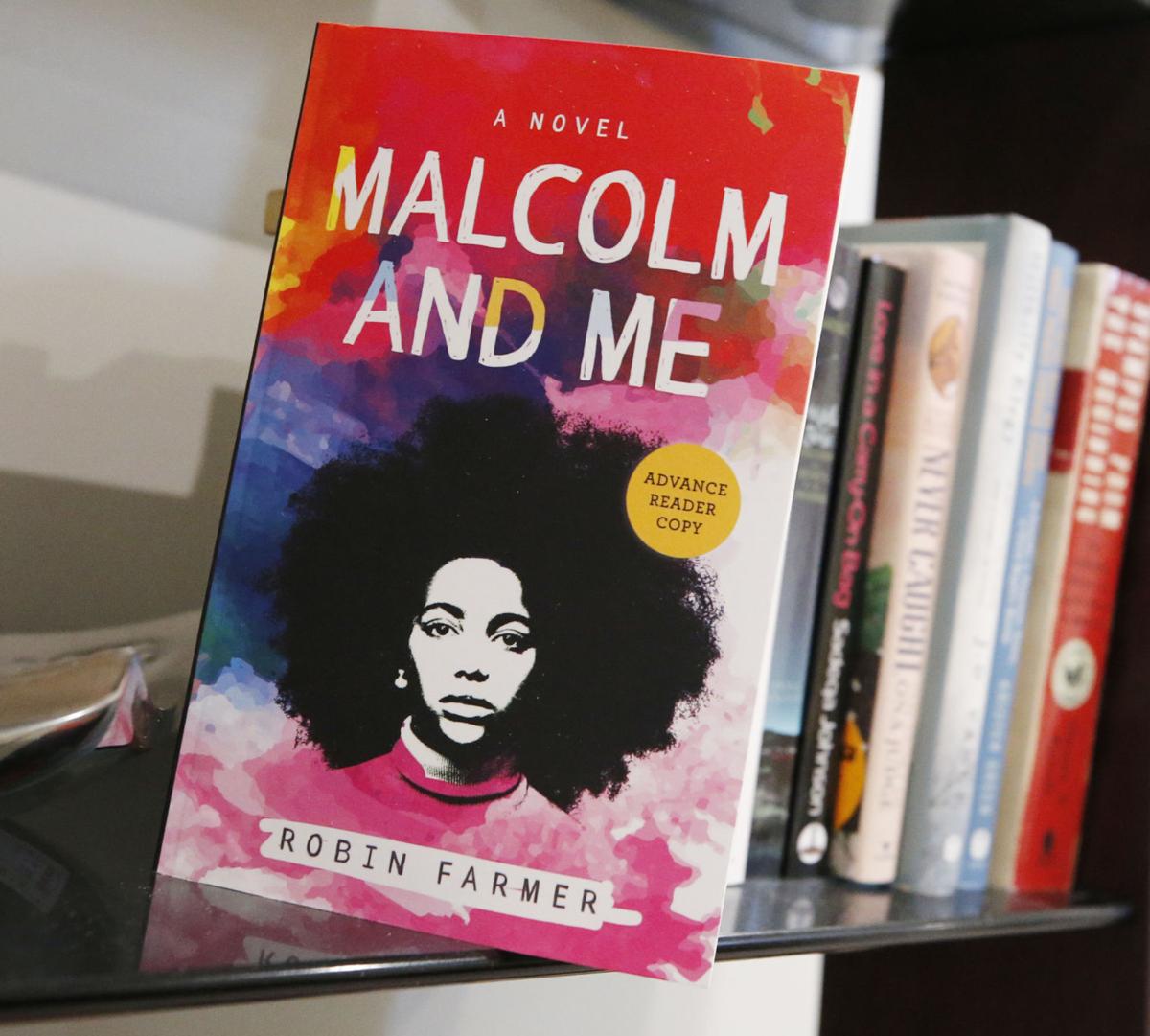 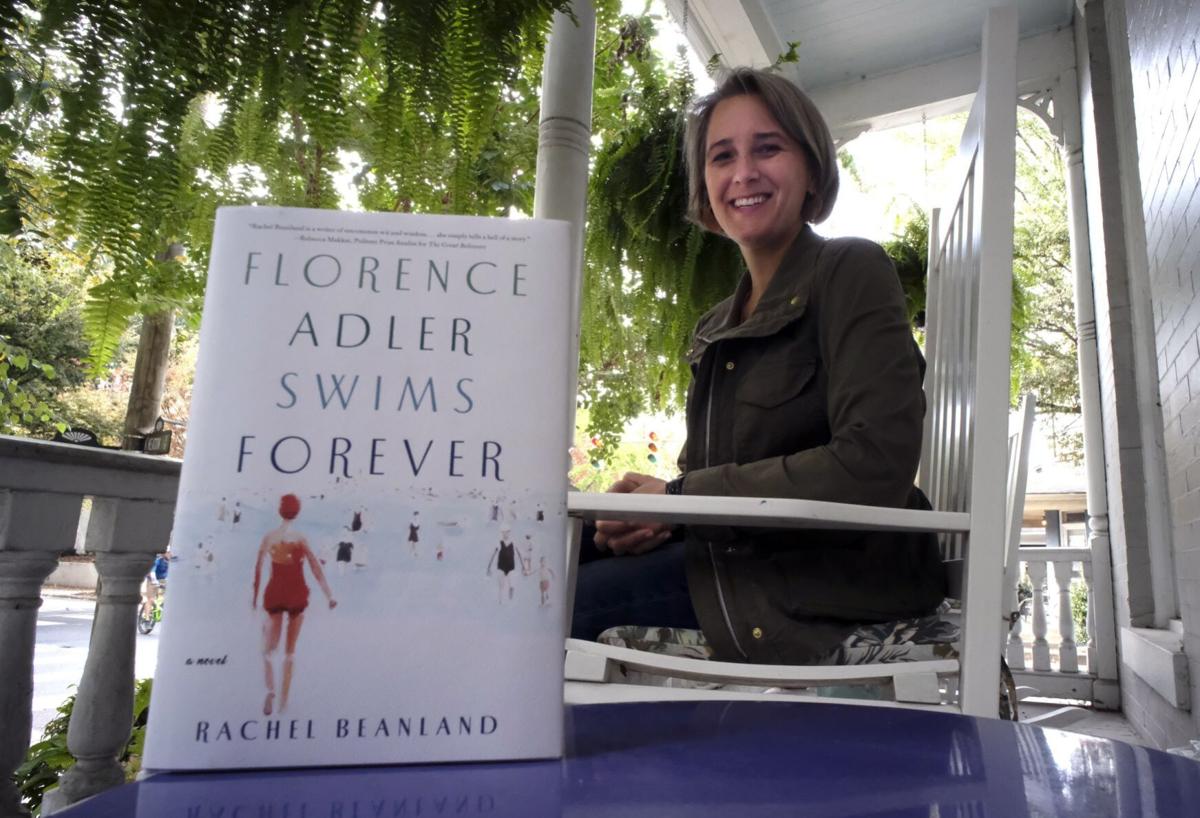 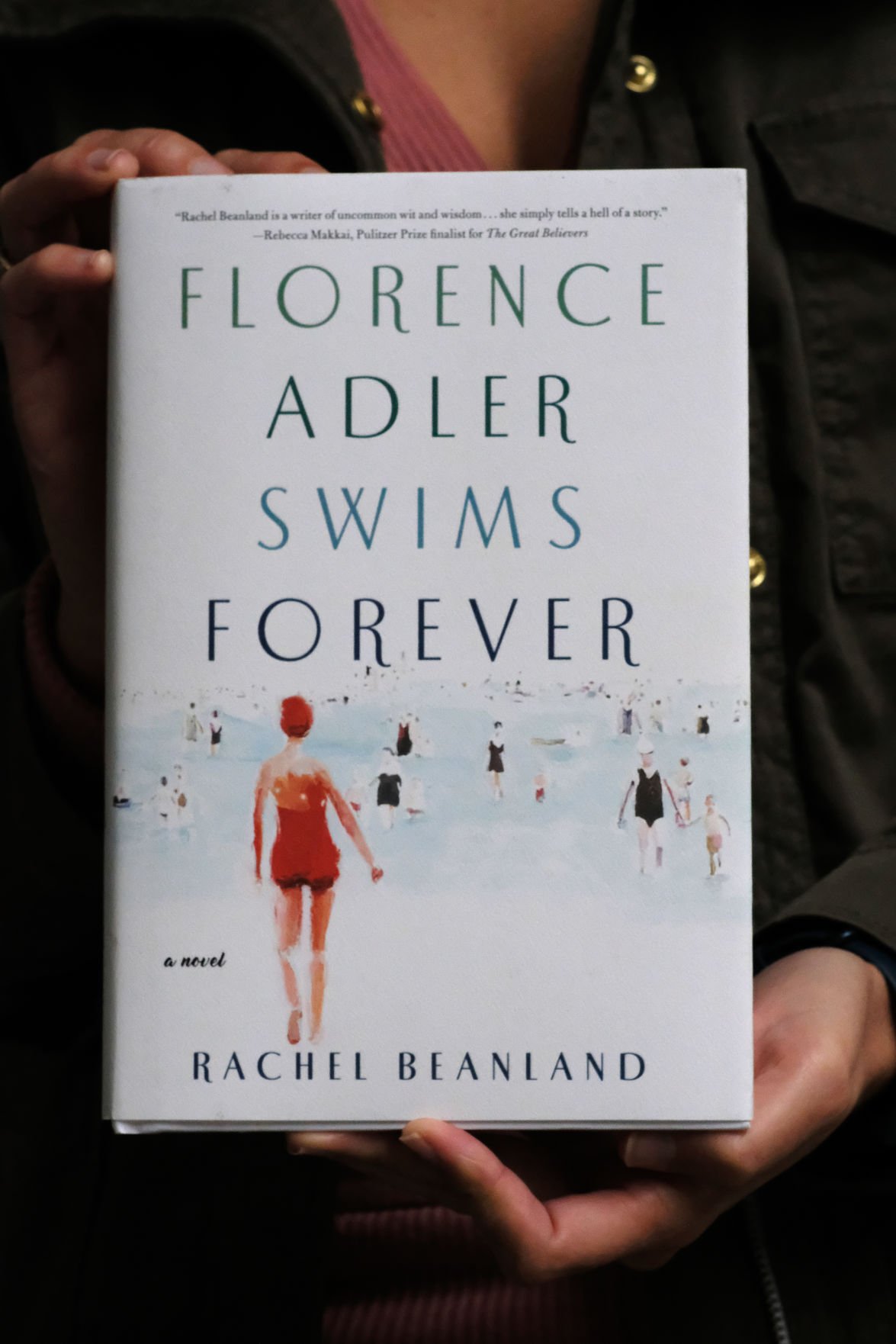 Two Richmond-area authors have been gathering national attention for their debut novels. Robin Farmer’s forthcoming “Malcolm and Me” was recently hot-listed by BuzzFeed, while Rachel Beanland’s first novel sizzled over the summer as a Barnes & Noble Book Club pick.

Farmer’s novel doesn’t drop until late November, but the striking cover and story have already caught the attention of BuzzFeed. The news and entertainment website named the novel one of the “12 Most Anticipated YA … Books for Back to School,” along with heavy hitters such as “Twilight” author Stephenie Meyer’s eagerly anticipated “Midnight Sun.”

“I was really excited to see my book up there with ‘Twilight’s’ Stephenie Meyer,” Farmer said in a recent phone interview from her home in Hanover County.

“Malcolm and Me” is about Roberta Forest, a feisty teenager growing up in 1970s Philadelphia. After clashing with her Catholic school teacher over Thomas Jefferson’s enslavement of people, Roberta begins to question everything in her life: her parents, school and the Watergate scandals.

“The Autobiography of Malcolm X” helps her cope with her parents’ troubled marriage and the inequality of the world around her.

Originally scheduled to be published in 2021, the novel is being released earlier (Nov. 17) because of its timely coming-of-age story and its deft handling of racial inequality and social justice. The idea for the novel came from the author’s personal experience as a young student dealing with racism from one of the nuns at her largely white Catholic school in Philadelphia.

“I had hair just like Roberta,” Farmer said. “I used to hide behind it.”

The book originally started as a screenplay, but changed over the years into a novel as she dug deeper and deeper into her characters and their experiences.

“Roberta is a kid who is criticized for being too smart, too loud, too strong, which a lot of Black girls are accused of being. I think it strikes a chord” with young girls today, Farmer said.

Set in the post-civil rights era, the book follows Roberta as she finds a way to protest the inequality around her and be a social justice activist, “just like young people are doing today: speaking up, marching for alliance,” Farmer said.

“The book is relevant today with the Black Power movement, but it’s also timeless. When have we as a nation never dealt with the abuse of power, hypocrisy or dysfunctional families?” Farmer said.

Farmer is a freelance writer and former Richmond Times-Dispatch staff writer who has won numerous awards, including the Knight-Wallace Fellow for accomplished journalists at the University of Michigan. She is married to RTD columnist Michael Paul Williams.

She had been working on “Malcolm and Me” since 2010, but it wasn’t until 2015, when she was selected for the prestigious Djerassi Resident Artists Program in California, that she reached a major turning point.

The five-day workshop titled “How to Write Your Debut Manuscript Without an MFA,” was a perfect fit for Farmer, who didn’t have a master of fine arts degree.

“The executive director told us, ‘You only get here by invitation, and we only invite artists.’ That’s the first time I thought of myself as an artist. And everything changed,” she said. “That’s when I got serious.”

Later, during a monthlong residency, she wrote 25,000 words, which is about 100 pages double-spaced. After that, a fellowship at the Virginia Center for the Creative Arts in 2017 helped her finish 75% of the novel.

In 2019, Farmer won a nationwide contest for the novel, which is published by SparkPress. The She Writes Press and SparkPress Toward Equality in Publishing, or STEP, contest, aims to bring more diversity to the literary world, according to the publisher.

“Being a teenager, I remember those years well,” Farmer said. “I hope [I] capture that: the emotional state of a young teen who is dealing with something that really is traumatic. And is able to somehow find her way.

“I want readers, especially younger readers, to know it’s OK to forgive those who hurt you deeply. You have to let go of that anger in order to heal. Hate is a heavy load to carry,” she added. “Also, truth matters, especially in these days of alternative facts. Speak up, challenge, question, and think critically. Use your voice when others are afraid to do so.”

Published over the summer by Simon & Schuster, the debut novel was a Barnes & Noble Book Club selection as well as an Amazon best book of the month in July.

The Fan District resident spent over a decade in marketing and public relations before becoming a novelist.

But all the while, she had the tale of “Florence Adler” in her head. It’s based on the story of her great-aunt who was planning to swim the English Channel in 1934, but drowned while training in Atlantic City, N.J.

No spoilers here: This is the spark that starts the novel, which becomes an intergenerational story of a Jewish family that goes to great lengths to hide its family secret.

“I always wanted to write, but I think I was too practical to study creative writing when I was growing up,” Beanland said.

She studied journalism and PR at college, and when she moved to Richmond in 2007 with her husband, she initially landed a job in marketing at the University of Richmond, before eventually ending up at the Visual Arts Center of Richmond.

With three young children at home, she woke up at 4:30 a.m. every day to work on her novel before going to work at VisArts.

While still working full time, she took the novel writing workshop of Virginia Commonwealth University’s MFA program, even though she wasn’t a student. Former creative writing professor Tom De Haven almost never allowed anyone outside of the program to take the graduate-level class, but after seeing the merit of her early chapters, he allowed her to take the course.

Before she’d finished the first semester, De Haven starting talking up her book with his New York agent, Chad Luibl at Janklow & Nesbit, who is a VCU MFA grad. “I think I said something along the lines of, ‘Trust me. This is a manuscript that editors are going to beg you to bid on,’” De Haven said.

Beanland eventually enrolled in the MFA program in 2016, juggling her job and her writing. But when Luibl sold the novel at auction to Simon & Schuster in 2019 — just like De Haven predicted — she was able to leave her job to be a student full time and complete her degree in 2020. Her book hit the shelves just a few months after her graduation.

USA Today called “Florence Adler,” which was published in July, the “perfect summer read,” and Publishers Weekly praised the author for “beautifully handl[ing] the depiction of loss and rebuilding life without a loved one, describing moments that are by turns painful and moving.”

Publishing a debut novel during a pandemic brings its own set of challenges. Gone are the in-person book tours and the heady readings in front of a crowd. Instead, like everything else, book tours have gone virtual. Beanland teamed up with Chop Suey Books owner Ward Tefft to deliver a “launch party in a box” to interested readers.

Beanland said that she regularly speaks with libraries and bookstores across the country via Zoom and thinks that she may have had even more exposure this summer because libraries and community organizations are embracing Zoom readings and question-and-answer sessions with authors.

Also, with the ongoing pandemic, people are reading more. Recent data provided by Statistica showed that in March, 28% of boomers (those born from 1946 to 1964) were more likely to read books as a result of the coronavirus outbreak, along with 34% of Gen X respondents (generally, those born from 1965 to 1980) saying they were reading more and 40% of millennials (those with birth years from 1981 to 1996) saying they were more inclined to read books.

“You work on a book for so many years,” Farmer said. “Now you just have to hope and pray that people are going to read it.”

“Malcom and Me: A Novel”

Other Richmond-area authors with new novels this year

Debut novel from another VCU MFA grad offers a literary take on a group of UFO seekers.

From the author of the Printz prize-winning book for young adults “The Kingdom of Little Wounds,” “Mermaid Moon” is a literary story for smart teens about a mermaid who leaves the sea to find her mother.

Here are 20 of the year’s most eagerly awaited new titles, ranging from famous names to prestige-award winners to highly anticipated first-timers.

Critic picks 20 of the most eagerly awaited books of 2021

Whatever 2021 may bring, it will definitely be filled with new books.

Inspiring earnest thought as it entertains, the novel depicts the ways in which ruin can befall us in an instant.

'Let Me Tell You What I Mean' by Joan Didion

This essay collection unites 12 Didion pieces, published from 1968 to 2000, on a variety of topics: journalism, California robber barons, not getting into Stanford, Martha Stewart. Penguin Random House, Jan. 26

15 nonfiction standouts for reading in the new year

As the calendar turns to 2021, here are 15 nonfiction books worth considering, covering race, history, science and more.

Chill out with these 10 wintry novels

In the midst of a real-life blizzard, it can be wonderful meta-reading when it’s snowing inside your book as well. Chill out with one of these novels.

'One By One' by Ruth Ware

This take on an Agatha Christie novel is so much fun to read. We all know the “group of people trapped in a mountain chalet in a snowstorm” routine, and yet, this one has twists and an undercurrent of rich techie millionaires.

Ninety writers each take on a five-year period of Black history in this unique volume, edited by Ibram X. Kendi and Keisha N. Blain, authors of, respectively, “How to Be an Antiracist” and “Set the World on Fire.” Penguin Random House, Feb. 2

Author Robin Farmer is photographed with her just-published book, Malcolm and Me. The bouquet was sent by a neighbor who matched the flowers to the colors of the book cover.