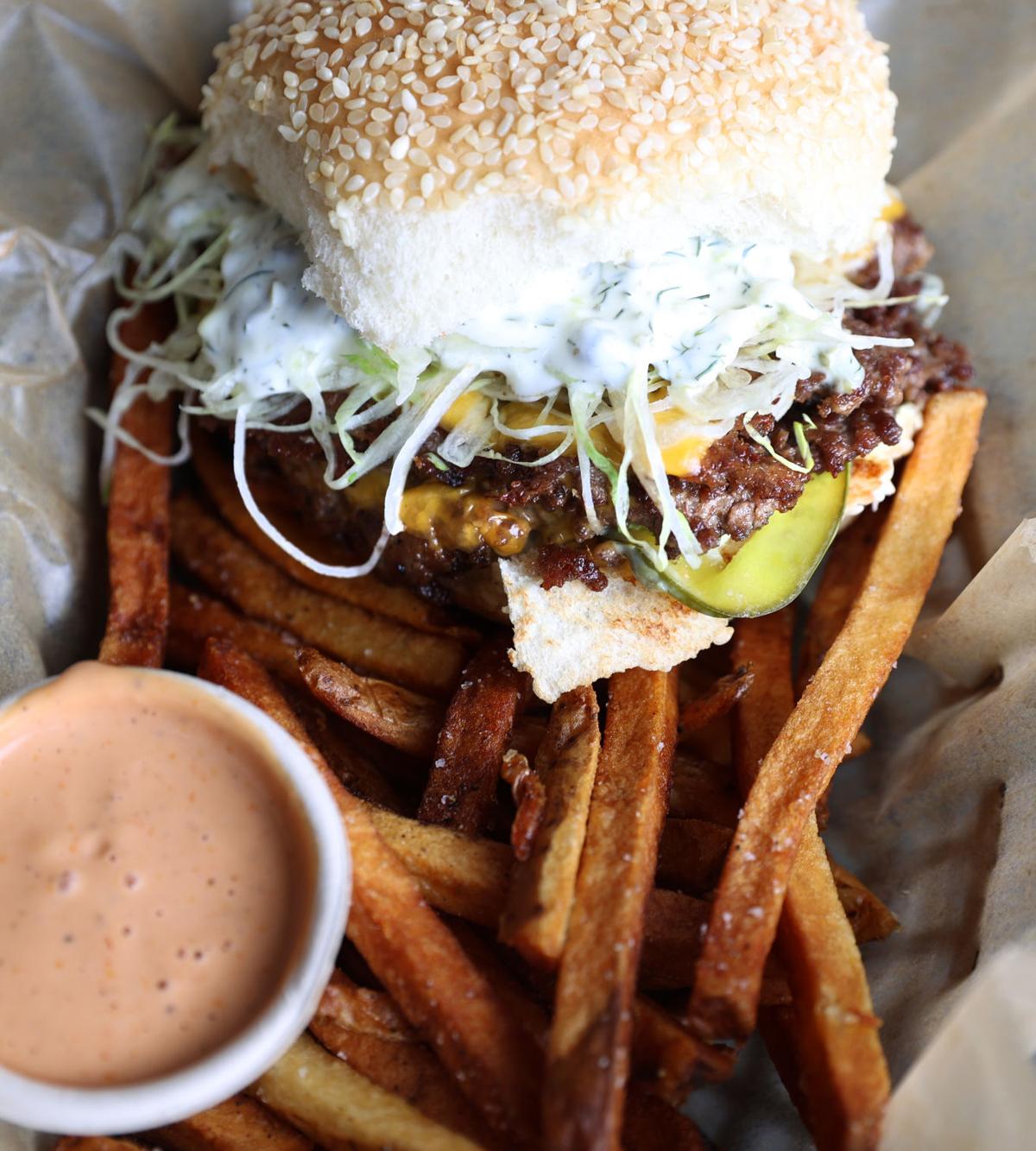 A peppy, dill-speckled tartar sauce drenches “The Ohio” burger, but the flavor of the beef still comes through. 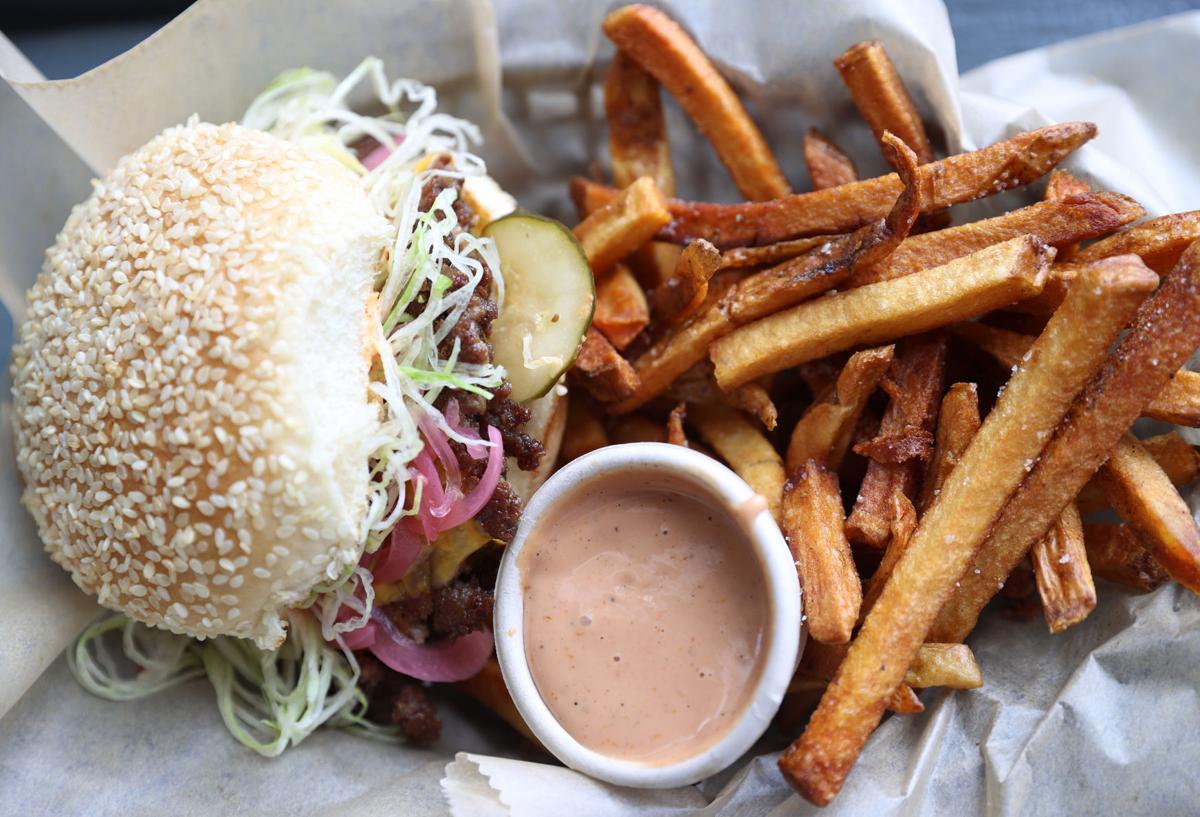 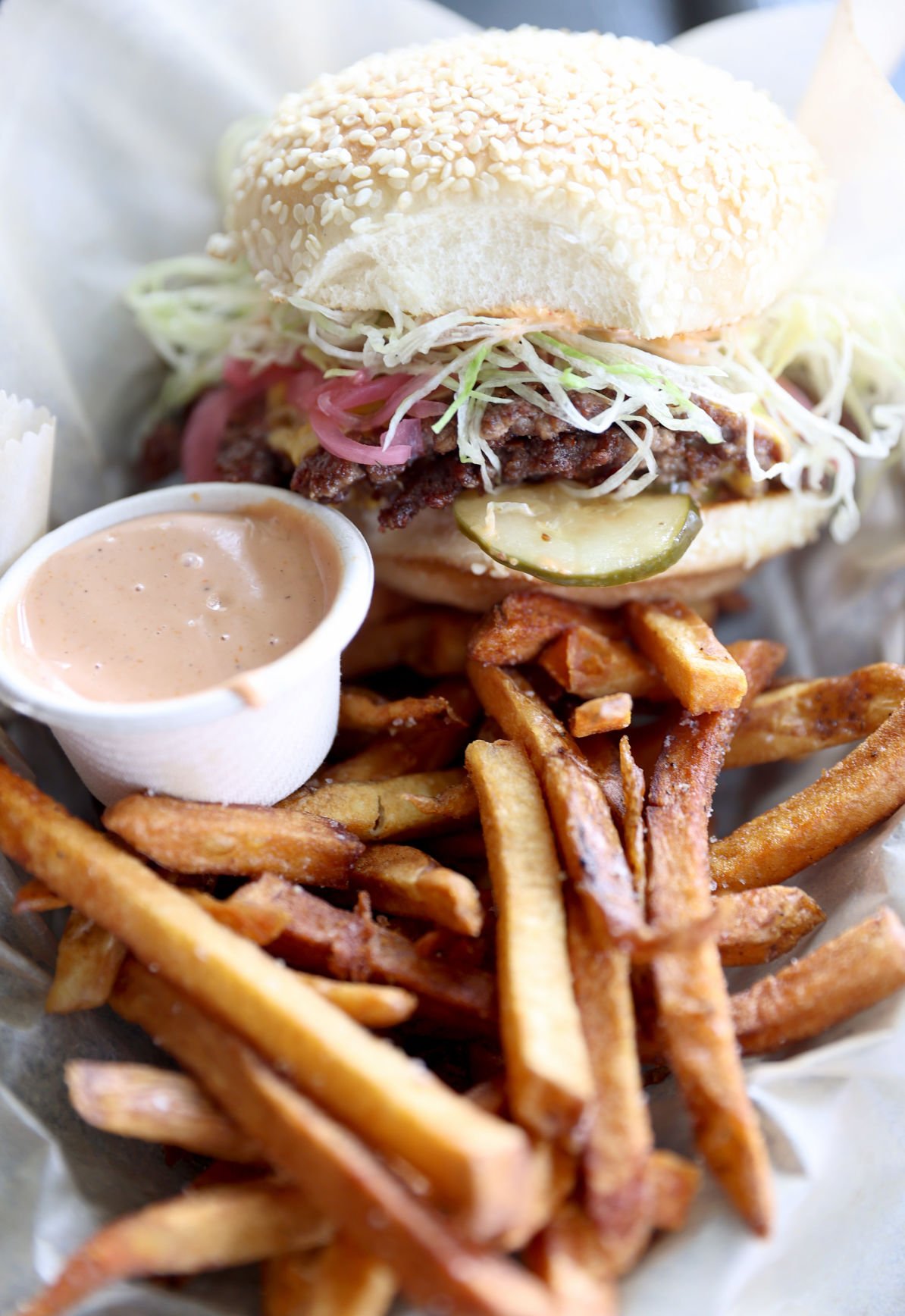 The eatery’s namesake “Cobra Burger” is a messy deal, dressed with a special sauce, cheese, “shredduce” and pickled red onions. 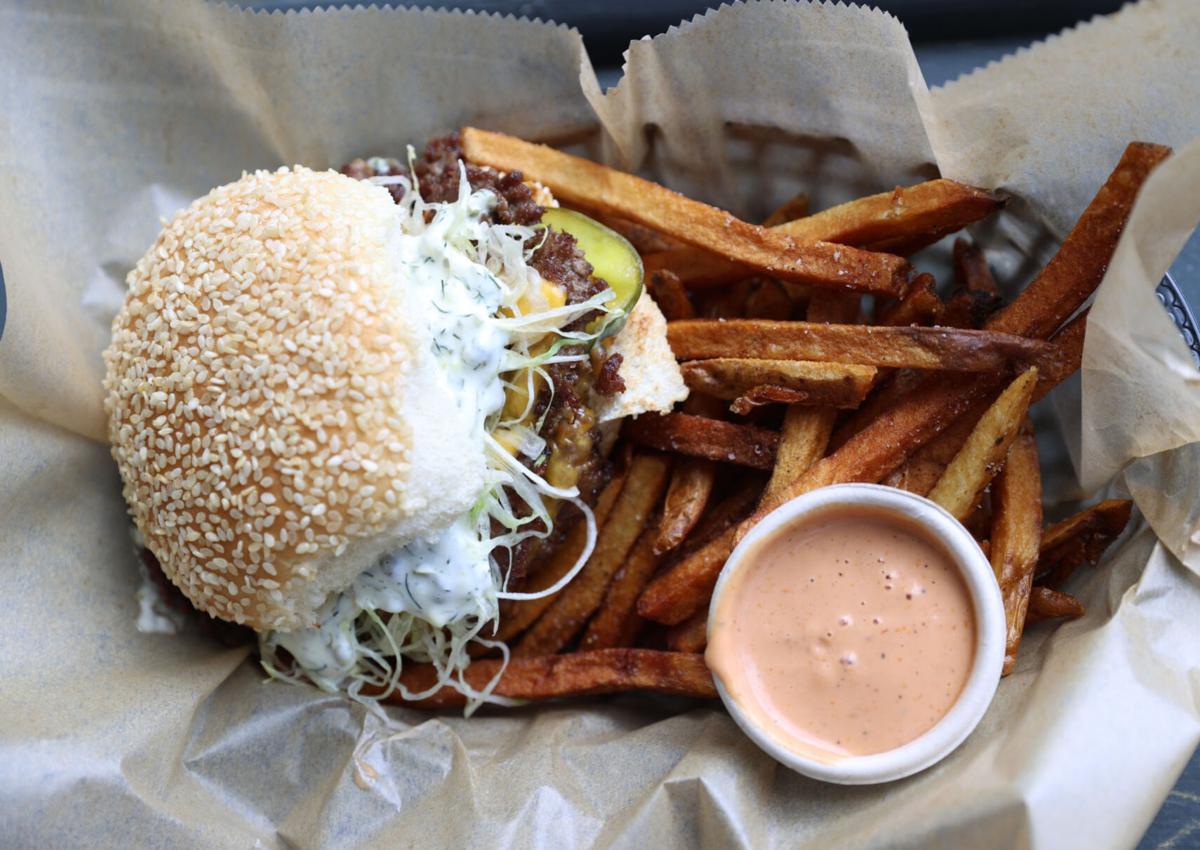 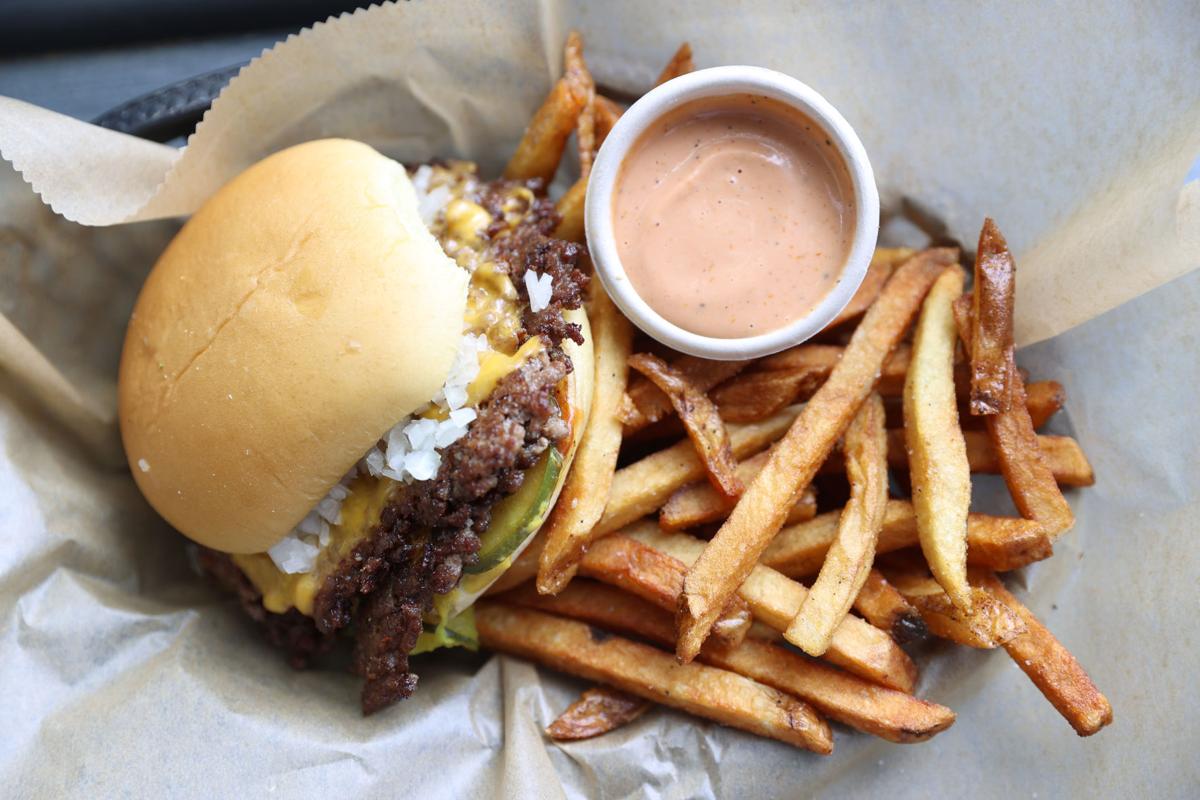 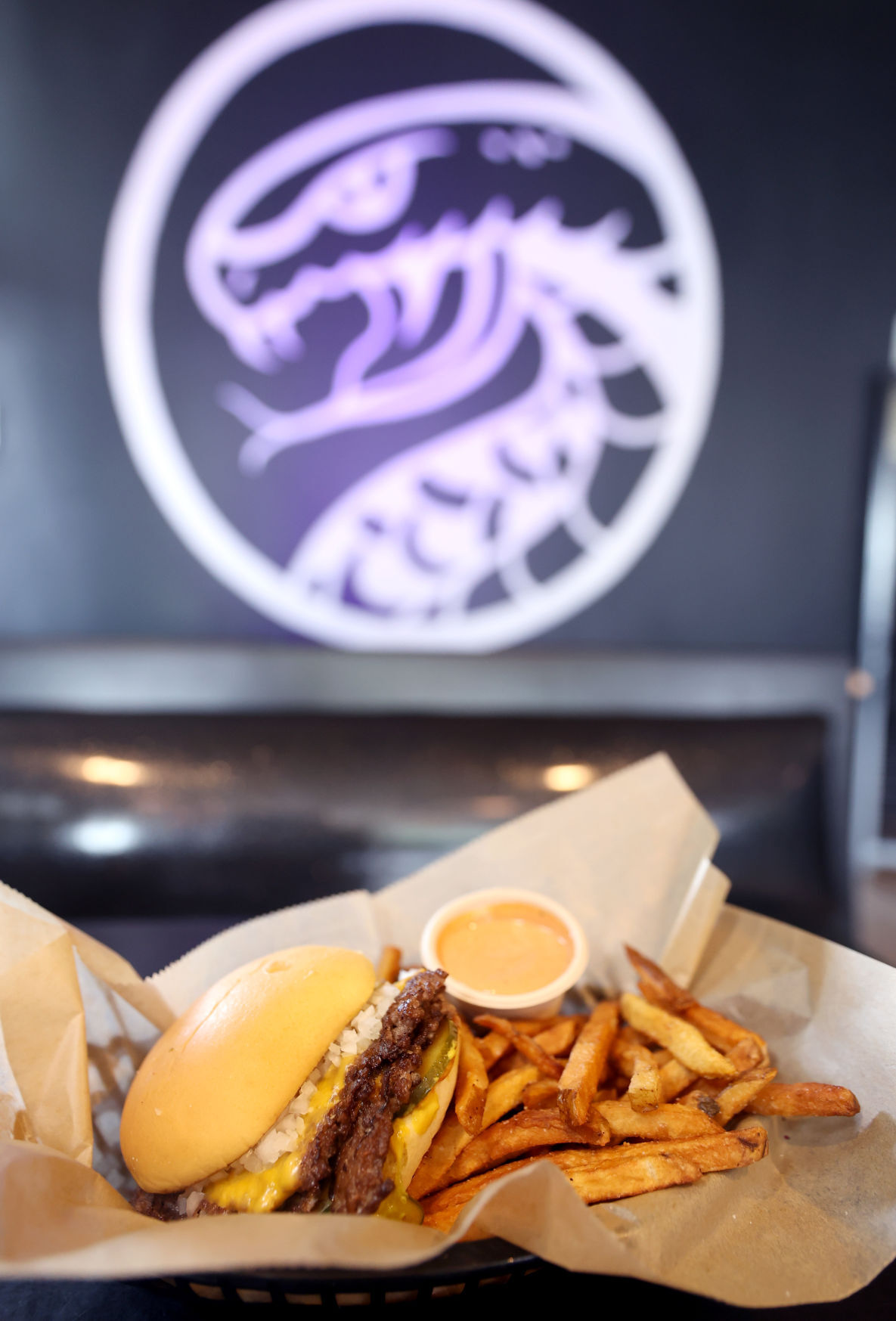 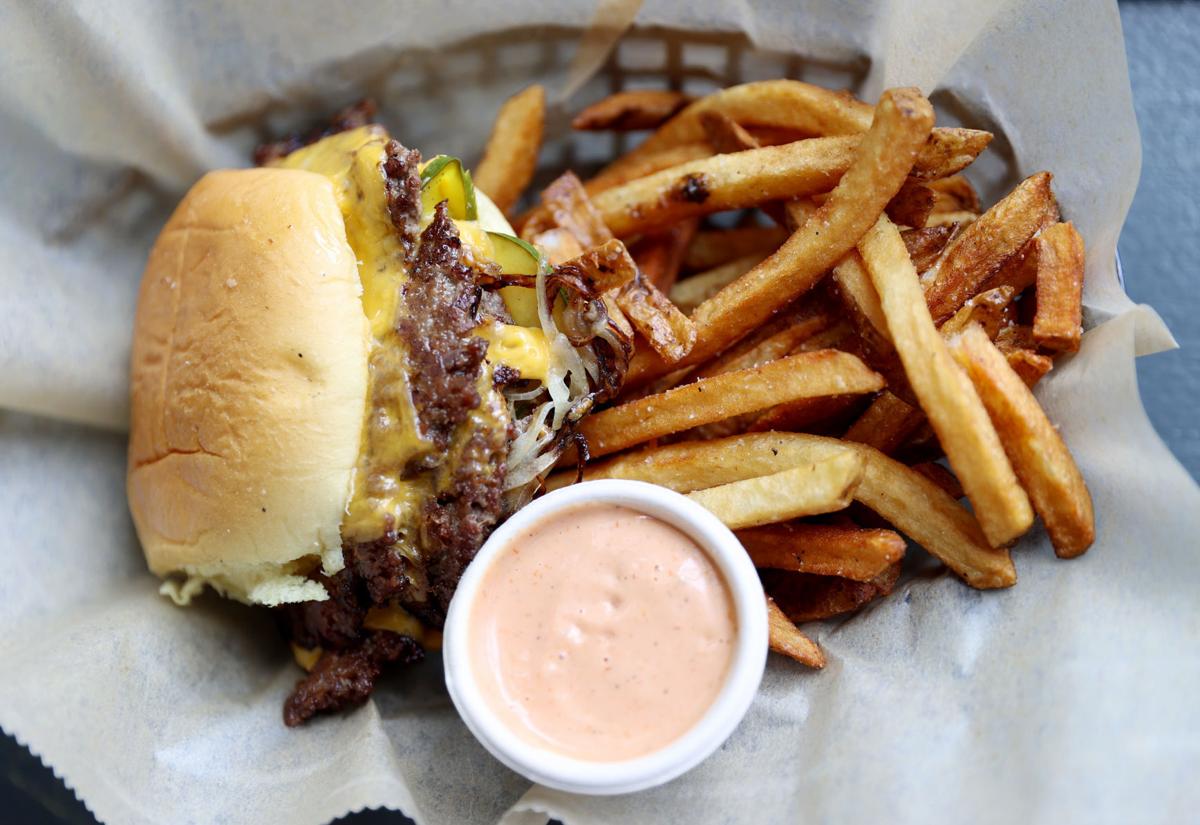 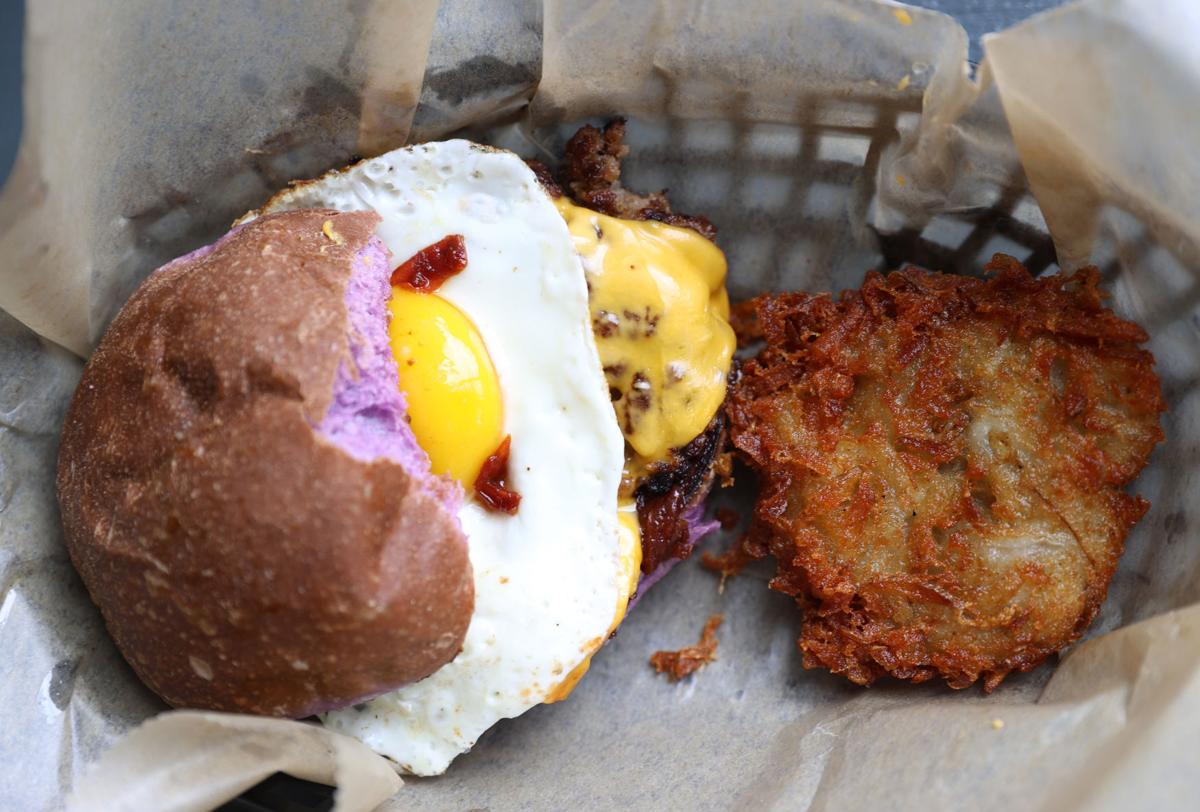 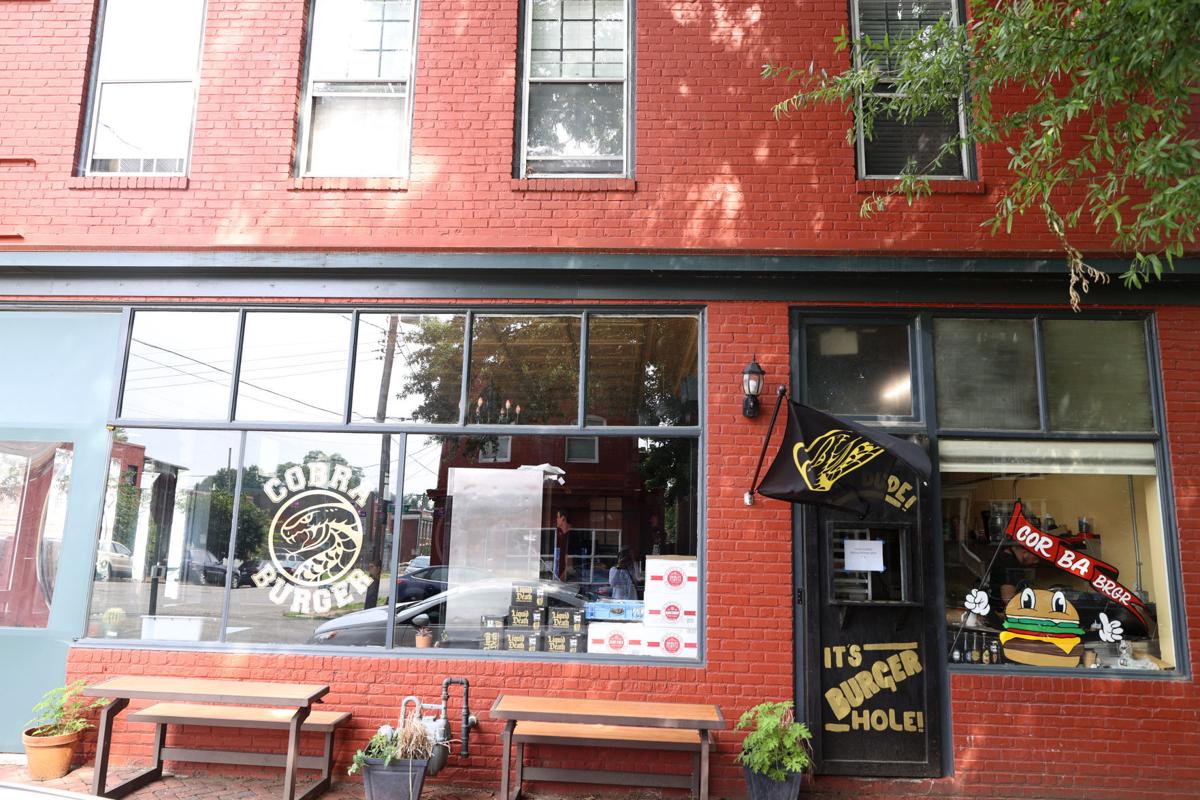 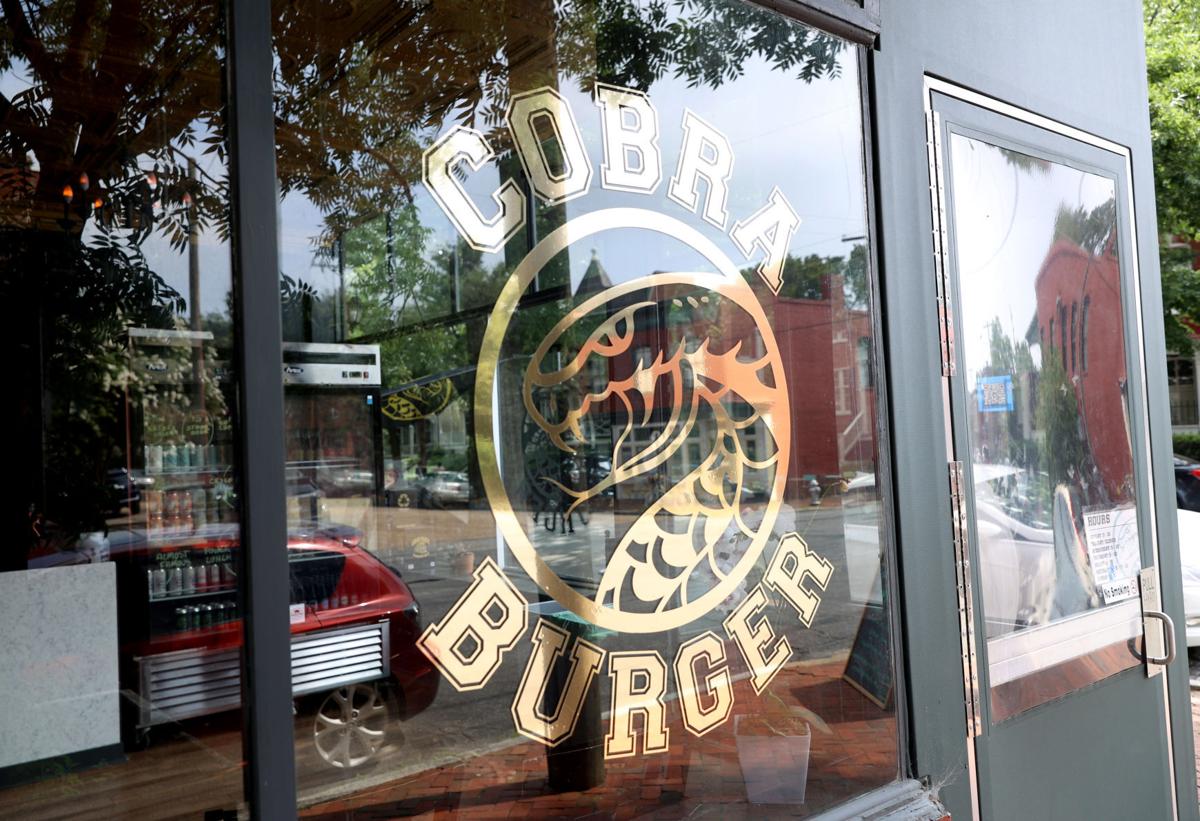 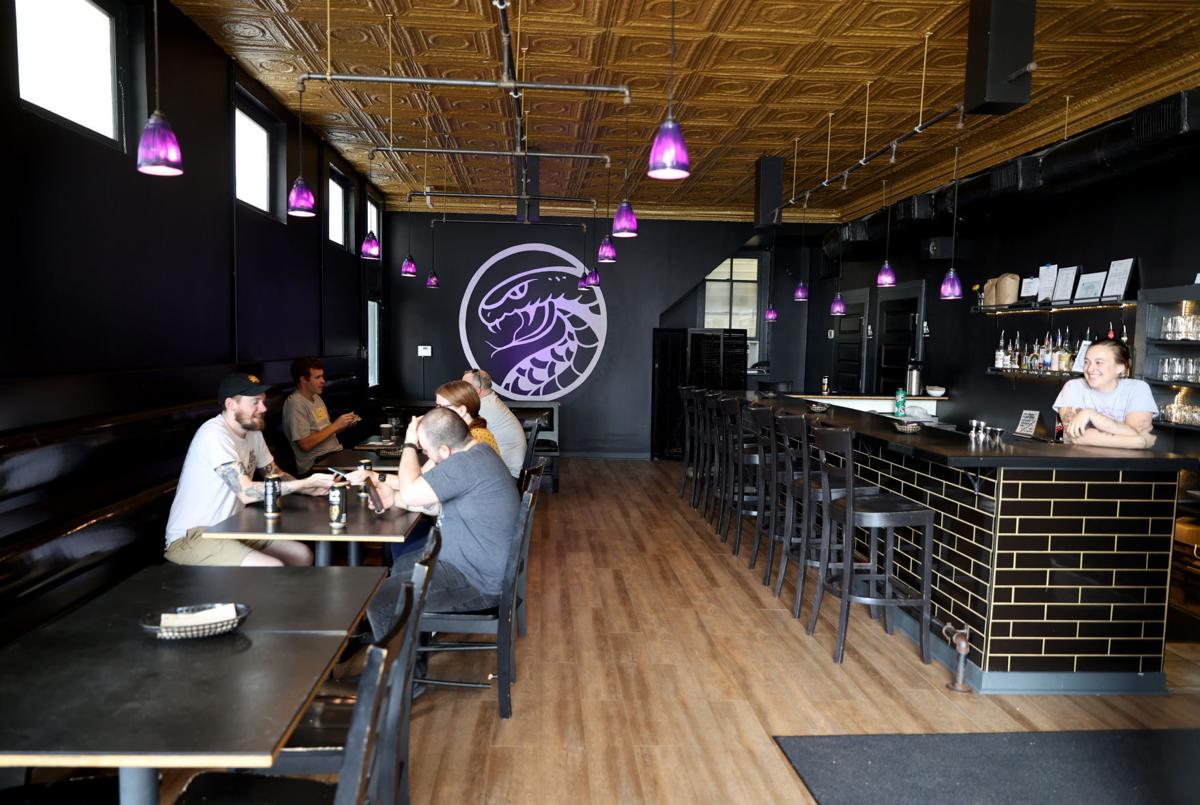 Editor’s note: Because of COVID-19, Times-Dispatch restaurant critic Justin Lo, instead of writing starred reviews, is previewing some of the newer restaurants that have opened in and around Richmond.

When Dutch & Company announced its closing last December, many, including myself, were left wondering what life would be like without chef Caleb Shriver’s immaculate culinary conceptions, his aptly named “Perfect Egg” no longer there to fulfill us.

Then came news of Cobra Burger’s arrival. A burger joint wasn’t what I pictured filling the void left by Shriver’s fabled Church Hill eatery. Was this really the second coming we were all hoping for?

Shriver himself had tapped Cobra co-owners Adam Musselman, Joshua Franklin and Mike Epps as his worthy successors, after learning of the burger pop-ups they had been staging since 2017. Still, the trio wasn’t sure at first how diners would take to such a radically different concept being introduced into the former Dutch space.

To say that Cobra has attracted a loyal following since it opened in February is an understatement. “Cultish” is the word that jumps to mind. On Cobra’s first weekend, the crew slung more than 400 burgers to sold-out crowds, night after night. Fanatics camped out on the curb as if attending the Woodstock of restaurant openings.

Like it or not, there’s a certain ritualism involved in attaining a burger from Cobra. You line up at the famous “burger hole,” a curbside ordering window that doubles as a confessional. (Yes, I do want two burgers, fully loaded. And yes, they’re both for me.)

As you wait for your food, you stand at attention before a cobra-crested flag that could pass for the insignia of House Slytherin.

And you snap a mindless selfie, as many do, because the sandwich board out front commands you to “take a photo of this sign for no real reason.”

The restaurant’s sense of humor is irreverent, cuss-filled and, at times, downright stupid. Cobra’s social media, a barrage of jokes about weed smoking and OnlyFans accounts, reads as if it has been proofread by a toddler, with such deliberate misspellings as “Corba” (Cobra), “borgor” (burger) and “chz” (cheese). For my birthday, the kitchen went out of its way to scrawl “Happy Birthday, A--hole” on my order.

These guys have founded their whole enterprise on the principle of “smashing stuff” — taking fistfuls of beef and grinding them down, before backhanding them with the large open palm of a metal spatula and pressing them firmly against a searing hot flattop.

Uncouth as this band of burger-making dudes may appear, they’re practically puritanical when it comes to the art of the smash burger. I’d expect nothing less from guys with such an extensive background in whole-animal butchery.

Musselman got started as a butcher in Portland, Ore. He later met Franklin while running the butcher shop at JM Stock Provisions in the Fan District. Up until the pandemic, they operated their own shop called Cardinal State Butchers in Bon Air.

Smash burgers are a natural extension of all that meat-based knowledge. They’re an ideal vehicle for showcasing beef of the highest quality. Musselman and his partners source theirs from Grayson Natural Farms in Independence, claiming those less-than-steakhouse-ready cuts that tend to get overlooked.

As skilled butchers, they see the potential in taking the tougher, harder-working musculature excised from a steer’s distal shoulder and posterior regions and compressing it into a pure, unadulterated mass of beef. The meat, seasoned with nothing but salt, is formed into patties that look more like expressionistic paint splatters than perfectly symmetrical circles. Their tapered edges crisp as their midsections lock in all those big, juicy, brawny flavors.

No matter how the burger is dressed, you can’t help but taste the beef — which is precisely what these former butcher shop owners want. Nor is Cobra’s burger patty the kind that puts on airs so it can land a spot on a fancy bistro menu. Frankly, it has more in common with a scrappy chopped cheese sandwich from a corner bodega in Harlem.

“I can’t stand big, thick bistro burgers,” Musselman says. “When you give me this super-thick thing with a leaf of bibb lettuce on a pretzel bun, I don’t know — that’s not a burger to me. I don’t think it’s food that necessarily needs to be elevated. It’s a burger; it’s pretty straightforward.”

At Cobra, the burgers come in three basic sizes — junior (one patty), regular (two patties), or king (four patties) — on a Martin’s bun, dripping with American cheese. Choose between boardwalk fries or a version with pickle seasoning that takes the concept of dousing fries in vinegar to the next level.

The simplest option is a burger glazed in butter until the meat swoons luxuriously on your tongue (“Big Baby Butter,” $10/$13/$26), its richness tempered by a feathery cushion of minced onions. Showing a more delicate side is an Oklahoma-style burger that tastes sous vide, a patch of caramelized onions embedded into the patty, gently steaming the beef as the onions cook (“The Dutch,” $10/$13/$26).

The namesake “Cobra Burger” is a messier deal ($10/$14/$26). Like an overfilled Easter basket, heaps of “shredduce” and pickled red onions spill out from all sides. The special sauce — melding with the cheese, oozing through every pore of the patty — has the same creamy-orange hue of those ketchup-and-mayo-based infusions you encounter at other burger joints. What the restaurant won’t tell you, though, is that Cobra’s version is embellished with Calabrian chiles for a stronger undertow of flavor.

Far messier and saucier still is a burger thoroughly drenched in tartar sauce (“The Ohio,” $10/$14/$26) — not that gloppy, shelf-stabilized stuff, but a peppy, dill-speckled version in which some fresh pickle juice thins out the mayo, achieving a precise measure of fat and acid. The burger’s an homage, Musselman says, to the house burger from Frisch’s Big Boy back in his home state of Ohio.

For weekend brunch (or “bronch,” as it’s dubbed by the Cobra crew), pork makes a cameo appearance in a lineup of breakfast sandwiches. Each one, furnished with a runny fried egg and some melty cheese, comes accessorized with a different varietal of pork sausage that’s smooshed atop the griddle just like the burgers.

A classic breakfast sausage, tinged with sage, gets bookended by an English muffin, right alongside a crackling potato cake that bears more resemblance to a latke than hash browns (“Jommy Dunes,” $8). Meanwhile, a Filipino-inspired longanisa, garlic-riddled and slathered in barbecue-y tomato jam, hunkers down into a springy, Grimace-purple ube pandesal bun (“Wake ’N’ Snake,” $7).

As with any popular movement, there comes a point where the forces driving it forward seem to transcend the leaders of the movement. Cobra, in only a few months, has developed a life of its own.

“At this point,” Musselman says, “Cobra Burger has kind of taken on its own voice. It’s turned into its own personality.”

A peppy, dill-speckled tartar sauce drenches “The Ohio” burger, but the flavor of the beef still comes through.

The eatery’s namesake “Cobra Burger” is a messy deal, dressed with a special sauce, cheese, “shredduce” and pickled red onions.