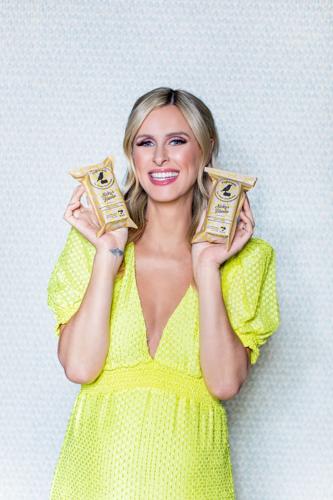 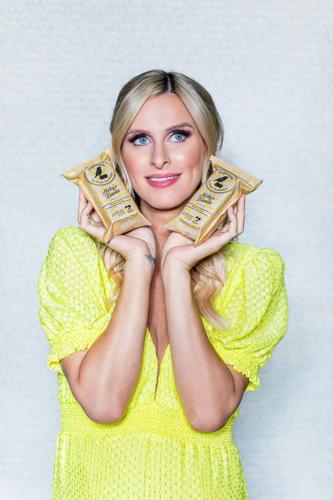 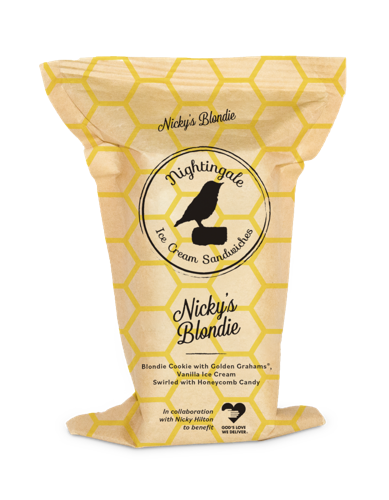 Nicky’s Blondie features a rich vanilla ice cream swirled with honeycomb candy in a Golden Graham cookie sandwich. It will be available locally in June.

When heiress and influencer Nicky Hilton Rothschild tasted a Nightingale Ice Cream Sandwich in the Hamptons, N.Y., and Instagram messaged the Richmond-based company saying she loved it, the owners were excited.

She mentioned that she’d love to learn more about the brand and conversations continued over the next few months, until they decided to launch a flavor collaboration.

“We’re really excited that it came about naturally,” said Erica Jacobs, director of marketing for Nightingale.

During conversations about flavor ideas, Hilton Rothschild mentioned loving honeycomb ice cream, which is popular in England where her husband grew up, but less common in the United States. The Nightingale team whipped up a few different ice cream sandwich versions based on the honeycomb idea and sent them off to Hilton Rothschild for tasting.

Starting in June it will be at The Fresh Market as well. A portion of the proceeds are being donated to God’s Love We Deliver, a nonprofit that delivers nutritious, medically tailored meals for people too sick to shop or cook for themselves.

In Richmond, Nightingale continues to release monthly limited-edition flavors: May’s flavor is Lavender Earl Grey and June is Banana Split. The sandwiches are all manufactured in Nightingale’s space at Hatch in Manchester, where the team of 40 employees produce around 70,000 sandwiches per week.

PHOTOS: 9 of our favorite frozen boozy drinks to try around RVA

Pandan Painkiller at The Jungle Room

The Cantario Conejo at Conejo

Megan Marconyak has been devouring every fresh flavor she can find and capturing it in writing for more than 15 years. Drool along with her dining adventures and send her your #RVADine tips on Instagram @MeganMarcoStyle.

A new location for Sugar Shack donuts is headed near Brandermill.

Are you wrapping up a dry January, Whole30 or other “new year, new me” monthlong health plan? Why not go out with a bang?

In honor of National Ice Cream for Breakfast Day (yes, that is a real thing), Richmond ice cream maker Gelati Celesti will be offering a free …

Richmond’s longtime favorite restaurant Acacia is finally about to reopen at Libbie Mill.

The restaurant decided to retool for a more approachable concept with a bigger bar program and casual eats for the Libbie Grove neighborhood.

Antonio Banderas suggests another 'Shrek' film could be on the way

Nicky’s Blondie features a rich vanilla ice cream swirled with honeycomb candy in a Golden Graham cookie sandwich. It will be available locally in June.