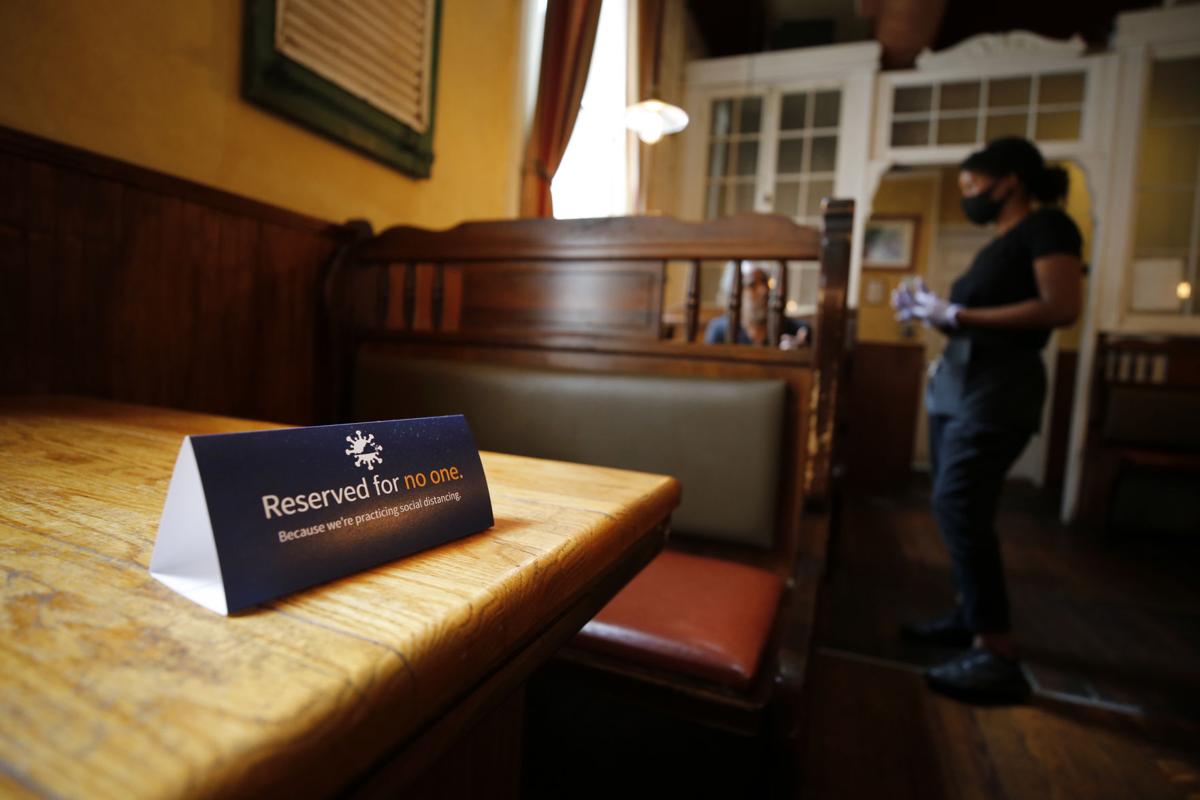 At Tarrant’s Cafe, tables are blocked off for social distancing. 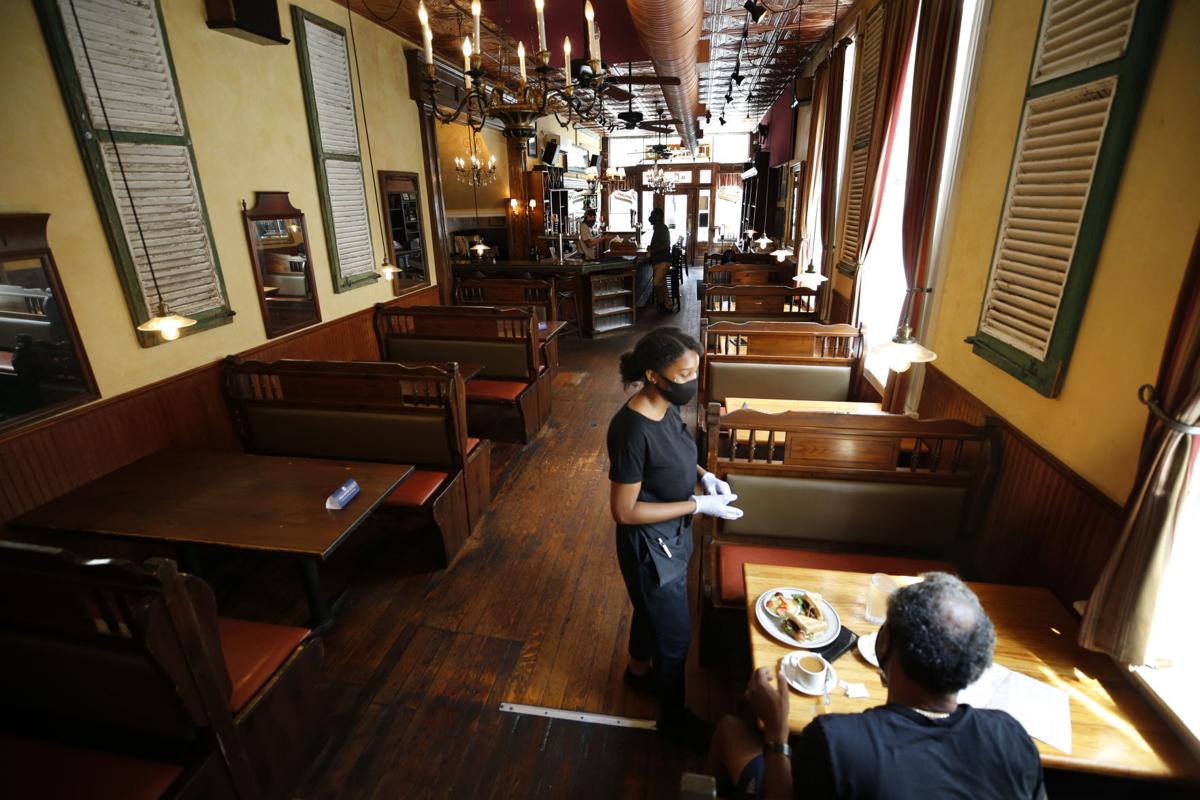 Server Cora Johnson speaks with customer Rickie Shaw at Tarrant’s Cafe. The restaurant was closed for four months this year. 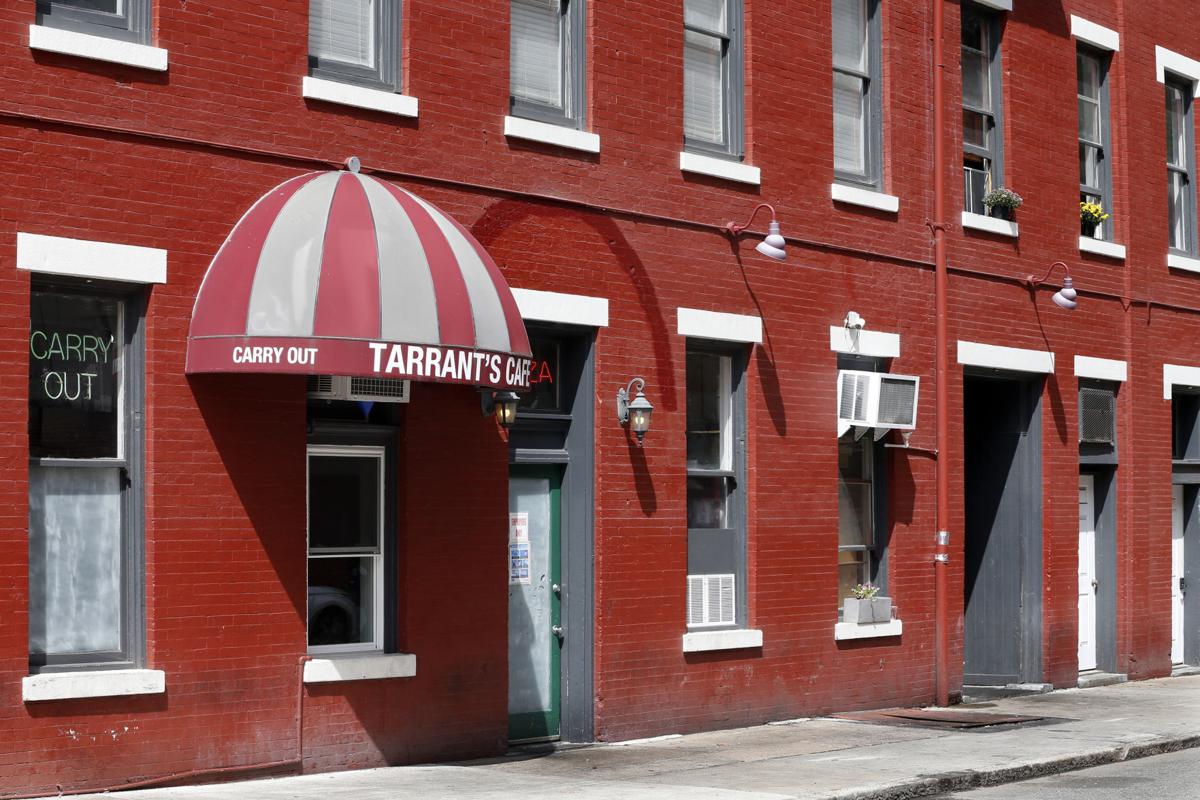 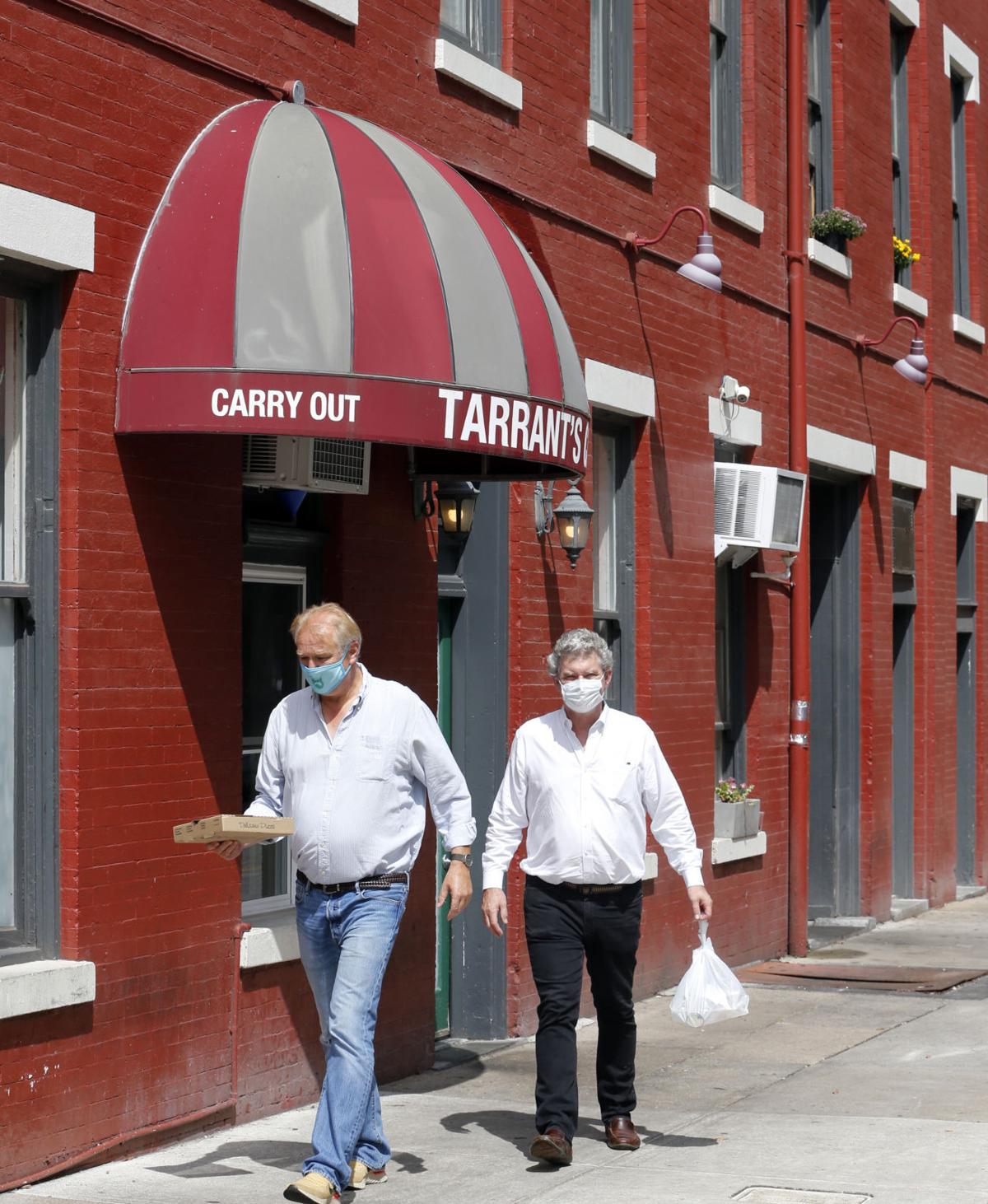 Tim Schulte,L, and Blackwell Shelley pick up an order at the carry-out window at Tarrant's Cafe on Thursday, Sept. 10, 2020. 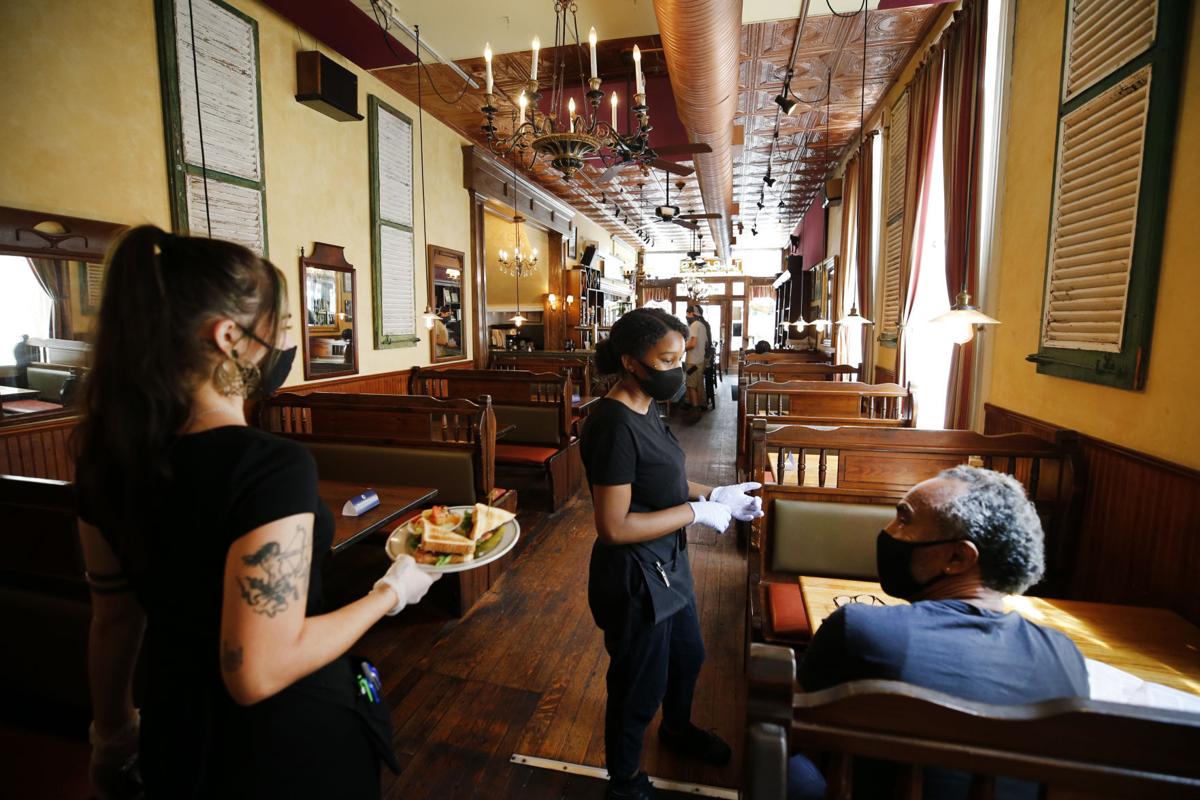 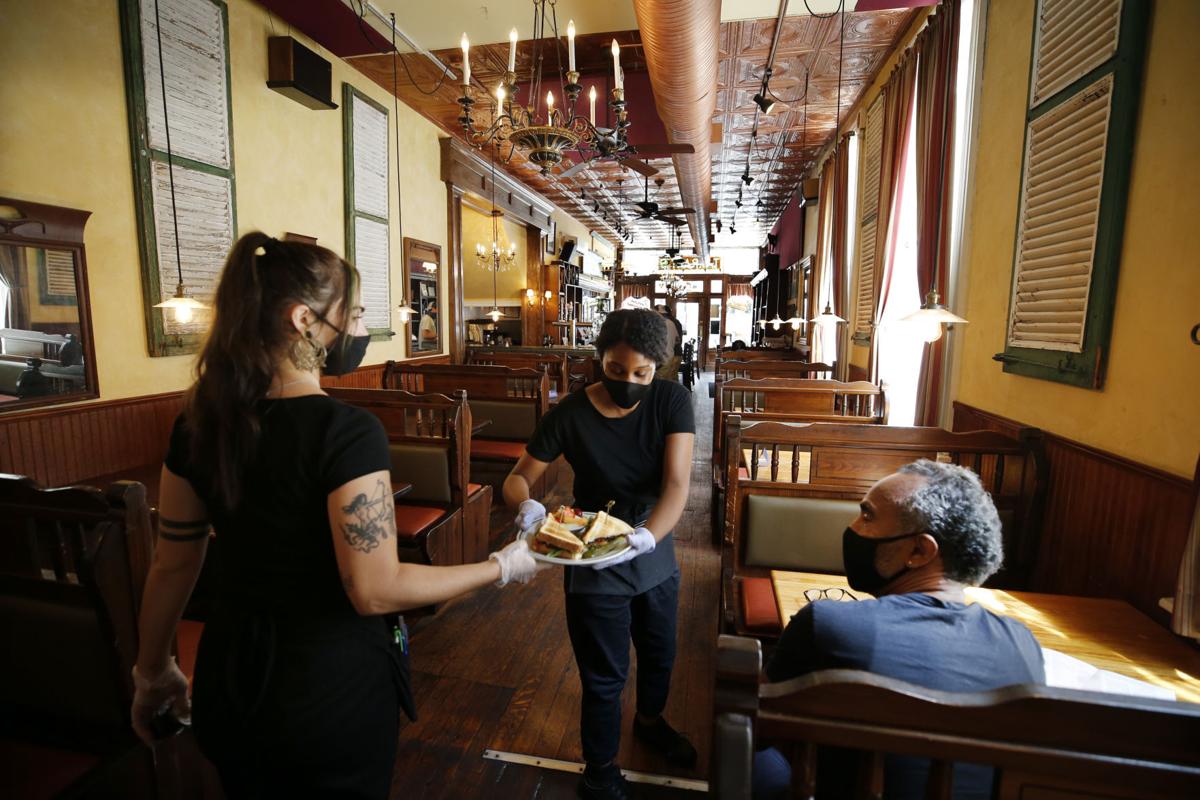 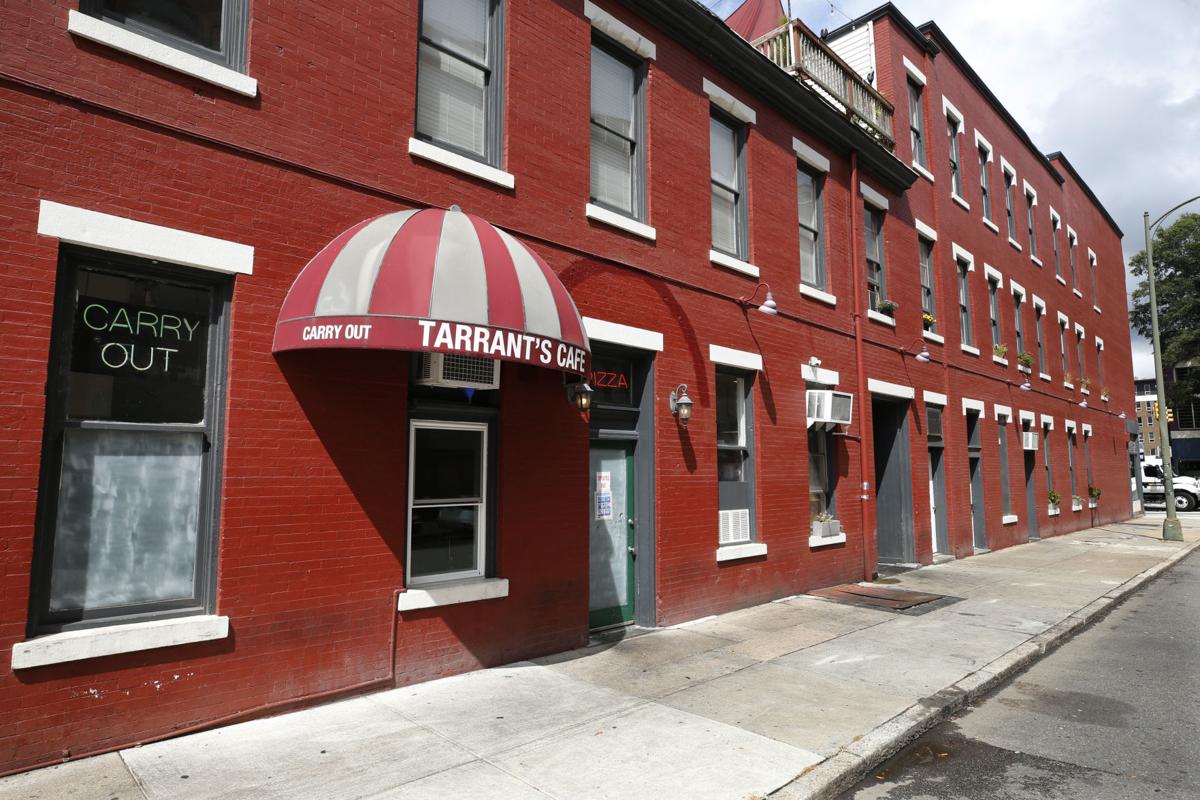 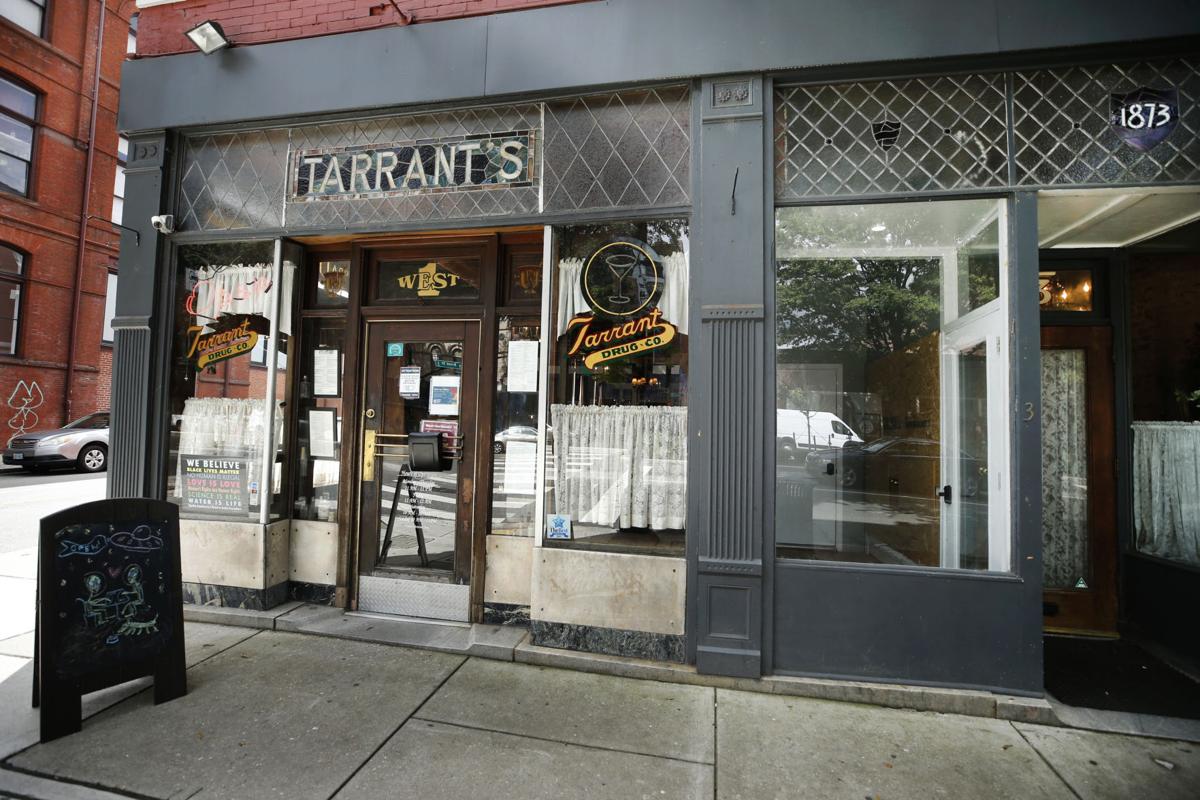 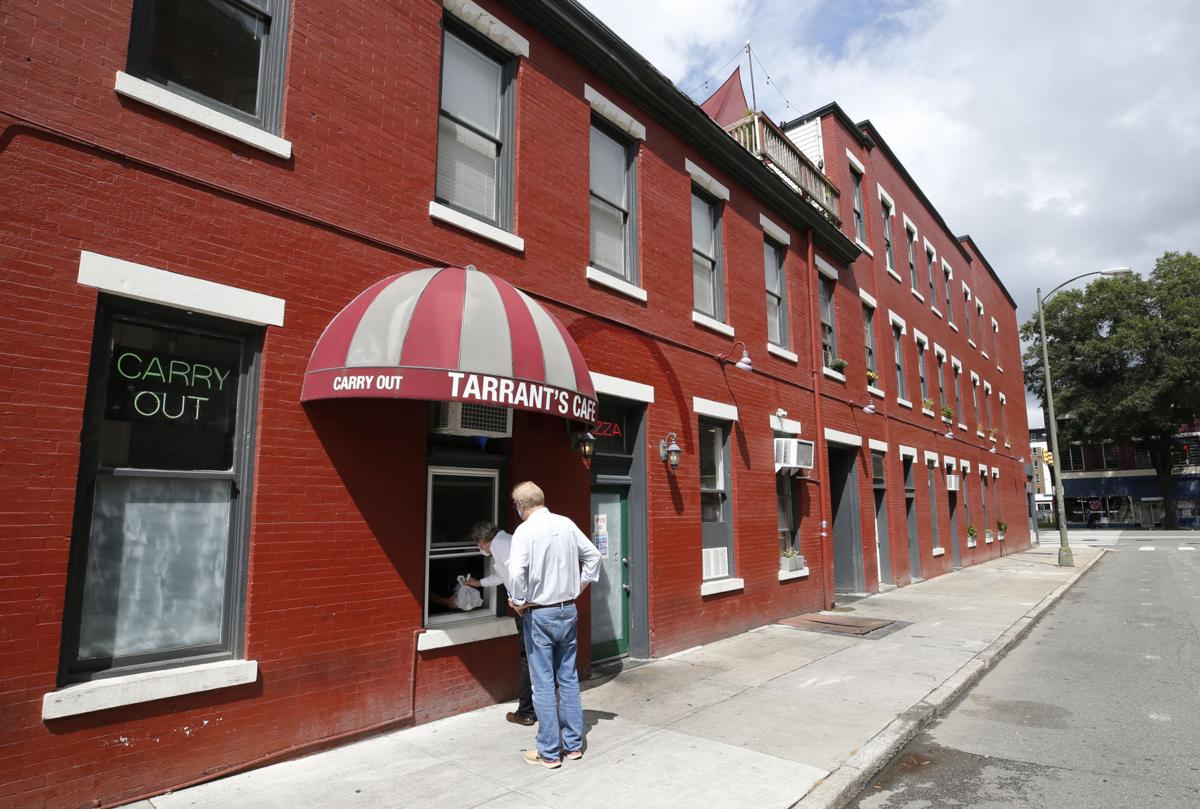 Updated: A previous version of this article said restaurants in Virginia had to pay their full ABC renewal bill based on seating. Virginia Alcohol Beverage Control Authority has since amended it statement to say restaurants can request a reduction.

Some Richmond restaurant owners are feeling frustrated over their alcohol license bills from the Virginia Alcohol Beverage Control Authority.

Across the state, restaurants have been operating at reduced — or in some cases, no — seating capacity since March, yet the state’s liquor monopoly is still assessing fees at its usual rate, even for fees based on a restaurant’s seating capacity.

In Virginia, restaurants pay Virginia ABC annual fees to serve wine, beer and spirits. The fees are flat for wine and beer: $145 a year to serve beer, $300 to serve wine and beer, or $600 to have the option of offering one or both for take-out or delivery.

Even though restaurants are technically allowed to operate at 100% capacity in Phase Three of the state’s opening guidelines, bar seating is still prohibited and with social distancing between tables, capacity is further reduced. In Richmond, restaurants couldn’t use any seating from mid-March until the city entered Phase One in early June and then allowed patio-only dining. Phase Two, which allowed 50% indoor capacity, happened across the state in June, but still, many restaurants remained closed for dining for months afterward.

Locally, restaurants are wondering why the state didn’t take their reduced seating capacity into account when sending out annual fee notices, especially given the state agency’s recent profit report. Virginia ABC announced Sept. 2 retail sales of $1.2 billion for its most recent fiscal year — a nearly $120 million increase from the previous year — of which $13,451,069 was from retail licensing fees.

“It’s unfortunate that it’s something no one [at the state level] thought about until now,” said Kevin Liu, co-owner of The Jasper restaurant and Carytown Cupcakes. “If the government had been proactive, rather than having restaurants come to them and have to prove it, they could have proactively addressed it.”

Virginia ABC initially said it doesn’t have the ability to waive or reduce fees, which “are mandated within the Code of Virginia,” but since online publication of this article Friday, Valerie Hubbard, a spokeswoman for ABC, amended the statement to say restaurants can request a reduction based on seating at the time of renewal.

Liz Kincaid co-owns RVA Hospitality, which manages four restaurants, including Max’s On Broad, Tarrant’s Cafe and Bar Solita. She recently received a bill from Virginia ABC to renew the liquor licenses at Max’s and Tarrant’s Cafe at full capacity.

At Max’s, for example, its bill was around $1,430 for full capacity, seating over 150, with an additional $600 for its on/off premise license. But under current occupancy guidelines, they can safely seat only up to 70 people, which would cut their bill in half. Further, ABC has allowed all restaurants to offer off-premise service during the pandemic at no cost — a $300 fee — that Max’s was charged for.

“The state has asked us to decrease our occupancy but is sending us a bill for full occupancy,” Kincaid said. “ABC is a state agency. They’re aware of the state occupancy guidelines, so I thought they would have sent me a bill for less.”

Kincaid flagged ABC, which said it’s sending out an agent to do a site inspection. But if she hadn’t, she would have had to pay full price, and she wasn’t aware that ABC had a policy that allowed her to do so.

With the pandemic, Tarrant’s Cafe was closed for four months, Max’s on Broad for five. Bar Solita reopened Friday.

Other restaurant owners have also taken notice of the full-price bills.

Michelle Williams, co-owner of The Richmond Restaurant Group, which owns and operates several local restaurants including The Daily Kitchen & Bar, The Hard Shell and The Hill Café, said her restaurants are still operating at between 30% to 60% of their pre-coronavirus occupancy, including the patios and temporary patio space. They are also paying for full liquor licenses on seats they cannot use.

“It would be nice [to get a refund], but ultimately its pennies on a problem that requires hundreds of thousands of dollars to fix,” Williams said.

Refunds, however, are not something ABC, an enforcement agency as opposed to a legislative one, has the ability to grant.

“During COVID-19 response this spring, we did have the ability through working with Gov. [Ralph] Northam and as authorized by his executive directive to defer the collection of certain fees,” she said.

Sales at local restaurants haven’t returned to their pre-coronavirus numbers and restaurants are trying to recoup losses from being closed for months. And the leisure and hospitality sector have been particularly hard hit by the pandemic, with employment down 22.5% from a year ago, according to recent statistics by Virginia Employment Commission.

“We are hopeful that the ABC and General Assembly will do the right thing and refund us some of the cost and continue to look at the process as COVID continues to negatively affect all of us,” Williams said.

Virginia ABC surpasses $1 billion in sales again, up by almost $120M - despite a 19% loss of restaurant sales

At Tarrant’s Cafe, tables are blocked off for social distancing.

Server Cora Johnson speaks with customer Rickie Shaw at Tarrant’s Cafe. The restaurant was closed for four months this year.

Tim Schulte,L, and Blackwell Shelley pick up an order at the carry-out window at Tarrant's Cafe on Thursday, Sept. 10, 2020.