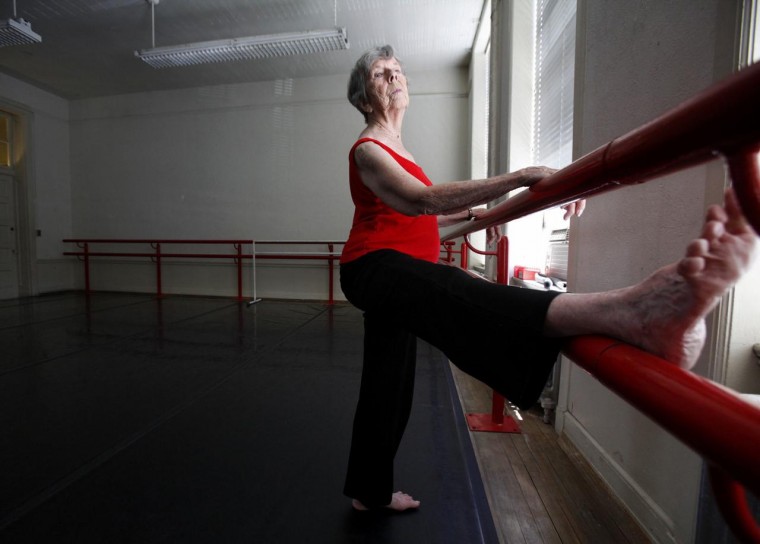 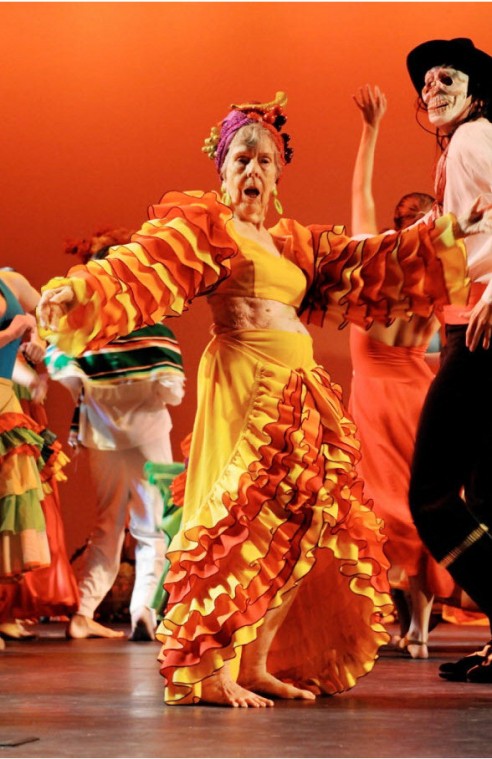 Frances Wessells, 91, is founder of Virginia Commonwealth University's Department of Dance and Choreography, having taught there since 1975. Above, Wessells performs with the Latin Ballet of Virginia.

At age 91, Frances Wessells, the grande dame of Richmond dance, still floats like a butterfly.

Wessells performed in March at Paris' Théâtre National de Chaillot, among the largest concert halls in the fabled City of Light.

She said — and Jason Akira Somma, her 31-year-old dance partner confirms — that the last of her three performances brought the audience to tears, and then people came up to kiss her.

"At the end, he was sitting in a chair and I was lying across him. I pulled up until I was in a ball and had my arms around him and our faces were together," Wessells recalled. "It was so full of love. It was not a sexy love. It was like the generations coming together. I felt it and he felt it, and I think that was why the audience was moved."

Moving audiences has become second nature to Wessells since her high school and college days in Denver, where she earned spending money performing as a chorus girl.

Her parents were professional musicians, but the end of vaudeville and the emergence of the "talkies" at the movies derailed the lives of many musicians, and her parents couldn't earn a living. Wessells' father joined the Denver sanitation department and later was a supervisor, and her mother became a homemaker.

Meanwhile, Wessells danced her way through the University of Denver and eventually earned a scholarship to New York University to pursue her master's degree. At NYU, Wessells learned at the feet, literally, of some of the greatest modern dancers of the age. Then, to fulfill her scholarship at NYU, she taught square dancing.

"I was from Colorado. Of course I knew how to square dance," Wessells said with a broad smile.

As a child, Wessells had difficulty staying still, so dancing came as naturally as breathing. She still has difficulty keeping still.

"She just takes off," said Somma, a former dance student of Wessells, recalling their recent performances in Paris, and before that in London, where he and Wessells danced two years ago.

Somma, who cites Wessells as an inspiration, has earned accolades for his marriage of dance and visual arts. His film of Wessells dancing contributed to his earning a highly competitive mentorship that led to invitations for them to perform internationally.

Somma met Wessells when he was a student at Virginia Commonwealth University, where Wessells has taught dance since 1975, having taken the lead in forming the Department of Dance and Choreography.

It was about a decade ago when Somma said he got a glimpse of her grit.

"That was the year she slipped and shattered her femur. A week after an extensive operation, I saw her and she flagged me with a cane.

"I lifted her from her wheelchair into the dance building. She said she just 'wanted to get back.' I just couldn't believe this woman's will."

VCU is one of three colleges or universities where Wessells has taught. After her graduation from NYU, she taught for three years at Sweet Briar College, and then part time for 25 years at the University of Richmond before going to VCU.

"I've had people write to me and say I changed their lives. I teach life through dance," said Wessells, who teaches improvisational dance at VCU.

"If you're college age, you're wondering who the heck you are and what you're going to do. My goal is to help them — through movement — to express their total selves, so they come out feeling good about themselves and knowing who they are."

Joan Brumbach of Manteo, N.C., was a student at the University of Richmond when she took a class in modern dance from Wessells.

Brumbach, a former actress and a 1972 UR graduate, said that besides teaching at UR, Wessells was choreographing performances at local theaters, writing dance reviews and performing on her own.

Wessells seemed to know everyone, and she helped her students meet important people in dance and theater. Brumbach recalled that as a UR student, her husband, Fred, once accompanied Wessells on a theater trip to New York.

"Fred said you couldn't go a block without someone recognizing her and yelling, 'Frances!' It's still true today," Brumbach said.

For 44 years, Wessells was married to John Wessells, a speechwriter and confidant to a succession of Virginia governors. She met him in Colorado, when they were singing in the church choir. They raised three sons before his death in 1988.

Michael, the oldest at 64, is a library manager in Aberdeen, Wash., and a minister in the Pentecostal Holiness Church.

"I think mom has crammed more in a lifetime than any three or four of us," Michael Wessells said. "She always encouraged us to pursue whatever we wanted."

He recalled his mother's career advice.

"She said for us 'To find something to do that we would pay someone else to let us do.' I've never forgotten that."

He said he sends his mother a box of books every year, and she has a special fondness for the No. 1 Ladies Detective Agency, a series of 12 novels by Scottish novelist Alexander McCall Smith.

For 19 years, Wessells has been married to John Bailey, a former art and dance teacher who once took a class from her, before entering George Washington University to earn a master's in dance.

Although she is a whirlwind in public, Bailey said his wife has a quieter family side. Still, he said she loves performing and was born to a role she has played all her life.

Judith Steel, an associate professor of dance at VCU and one of Wessells' colleagues, described her this way: "She never stops."

Steel says the keys to Wessells' enthusiasm for life are "curiosity and persistence."

"She is not deterred," Steel said.

Ana Ines King, founder of the Latin Ballet of Virginia, said Wessells is scheduled to dance in October with her group, one of many appearances through the years.

"She is an amazing woman," King said. "She is an icon for all of us, and she is our inspiration. Everyone wants to be like her."

Wessells is grateful that late in life people are still interested in watching her dance and in learning the art and theory of dance from her. She said her passion has never waned, nor has her will to push the boundaries of dance, "to move in beautiful ways."

Wessells, who has lectured to medical students who are studying aging, urged them "to get in shape when you're 20 and stay that way."

She said she has been able to keep going because of a combination of factors: "good genes, good diet, good discipline and good luck."

Here’s the full list of houses in the Richmond area lighting up with over-the-top, super bright displays this year.

Asbury Court is back for Tacky Lights, plus new additions with RVA Christmas Pig House & Clacky on Rossmere

It’s Tacky Lights season and after another year of the pandemic, it seems like everybody’s ready for some much-needed holiday cheer.

The Phifer home is one of the best-known tacky-lights houses in the area. Just follow the trail of buses and limos which have been visiting the Phifer home for 40 years for Tacky Lights.

With an emphatically warm greeting, Kemani Turton-Jones waited patiently behind the counter at Tablespoons Bakery on a recent morning for just…

Chuck Hudgins, creator of "Christmas Fantasyland" in Mechanicsville lost his battle with cancer this year. His wife, Sherry, along with the help of her daughter, son-in-law and grandson, will be lighting up the house in his honor.

Frances Wessells, 91, is founder of Virginia Commonwealth University's Department of Dance and Choreography, having taught there since 1975. Above, Wessells performs with the Latin Ballet of Virginia.