On Mother's Day, this Ashland mom will see if she can survive on the Discovery Channel's 'Naked and Afraid'
0 Comments
Share this
1 of 7 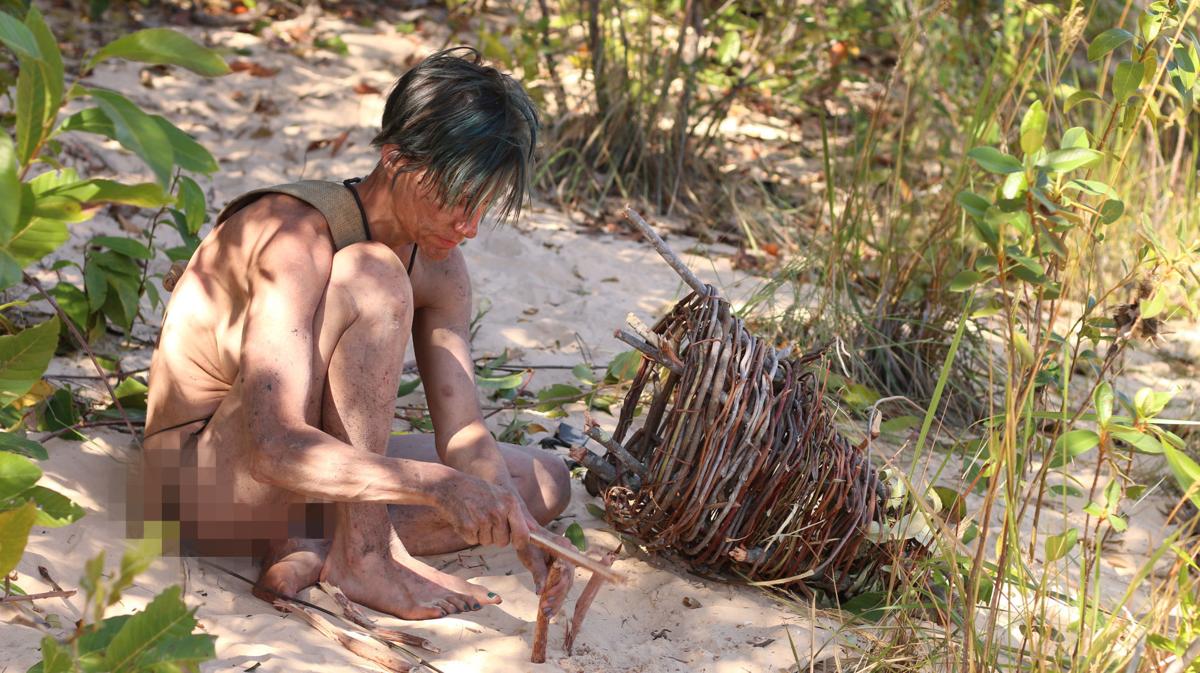 Suzänne Taylor quickly finishes one fish trap to start on another. 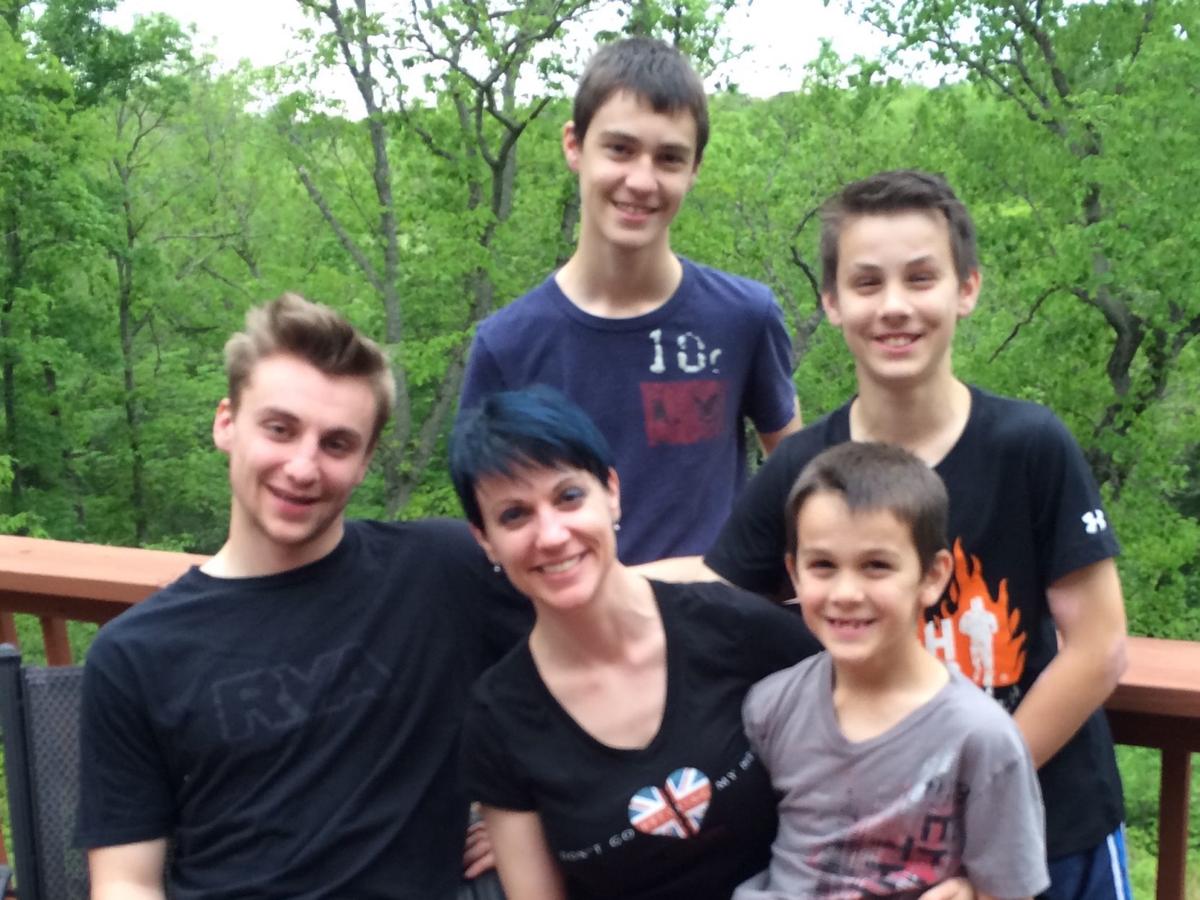 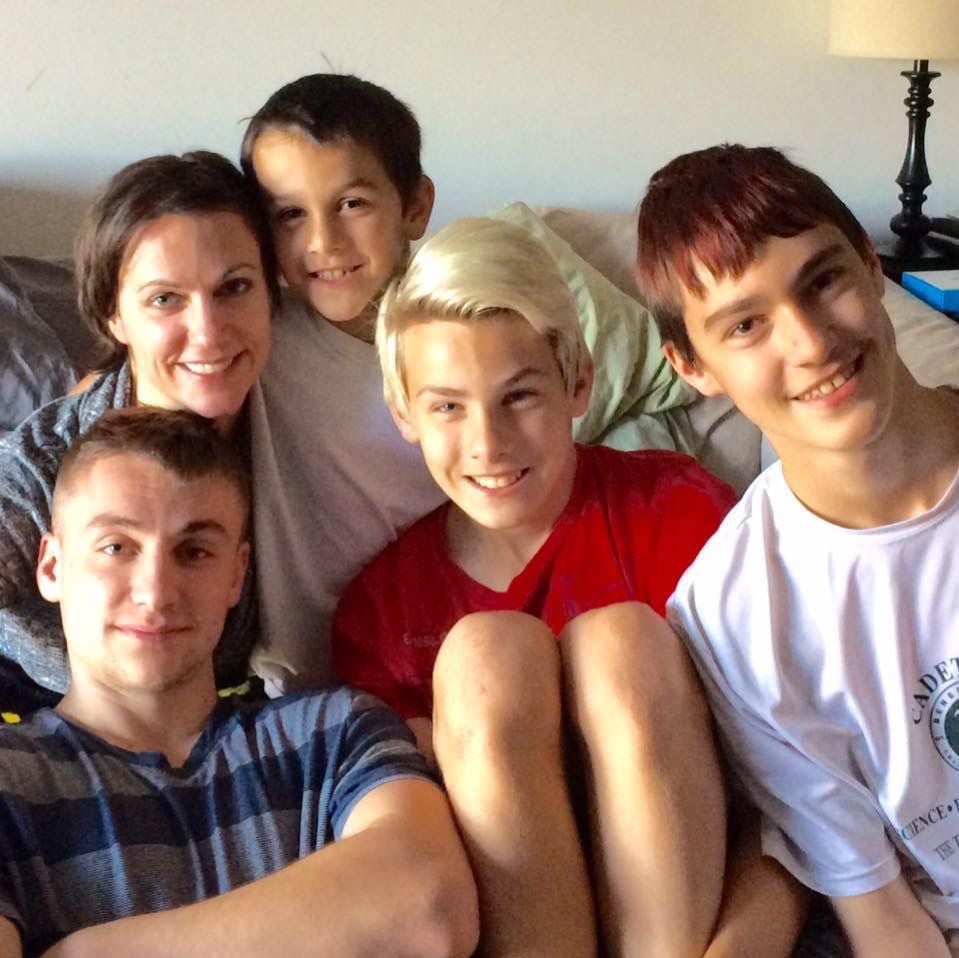 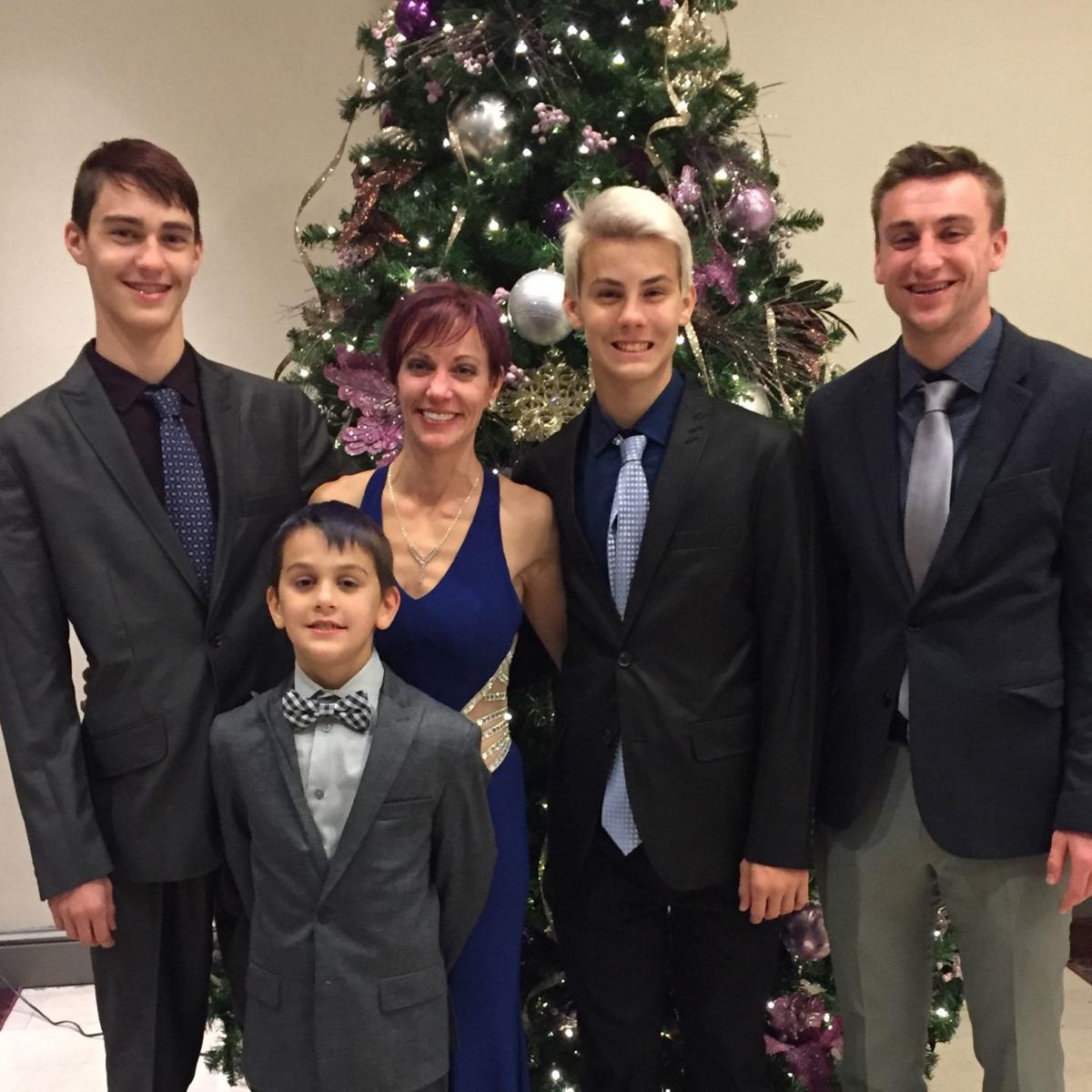 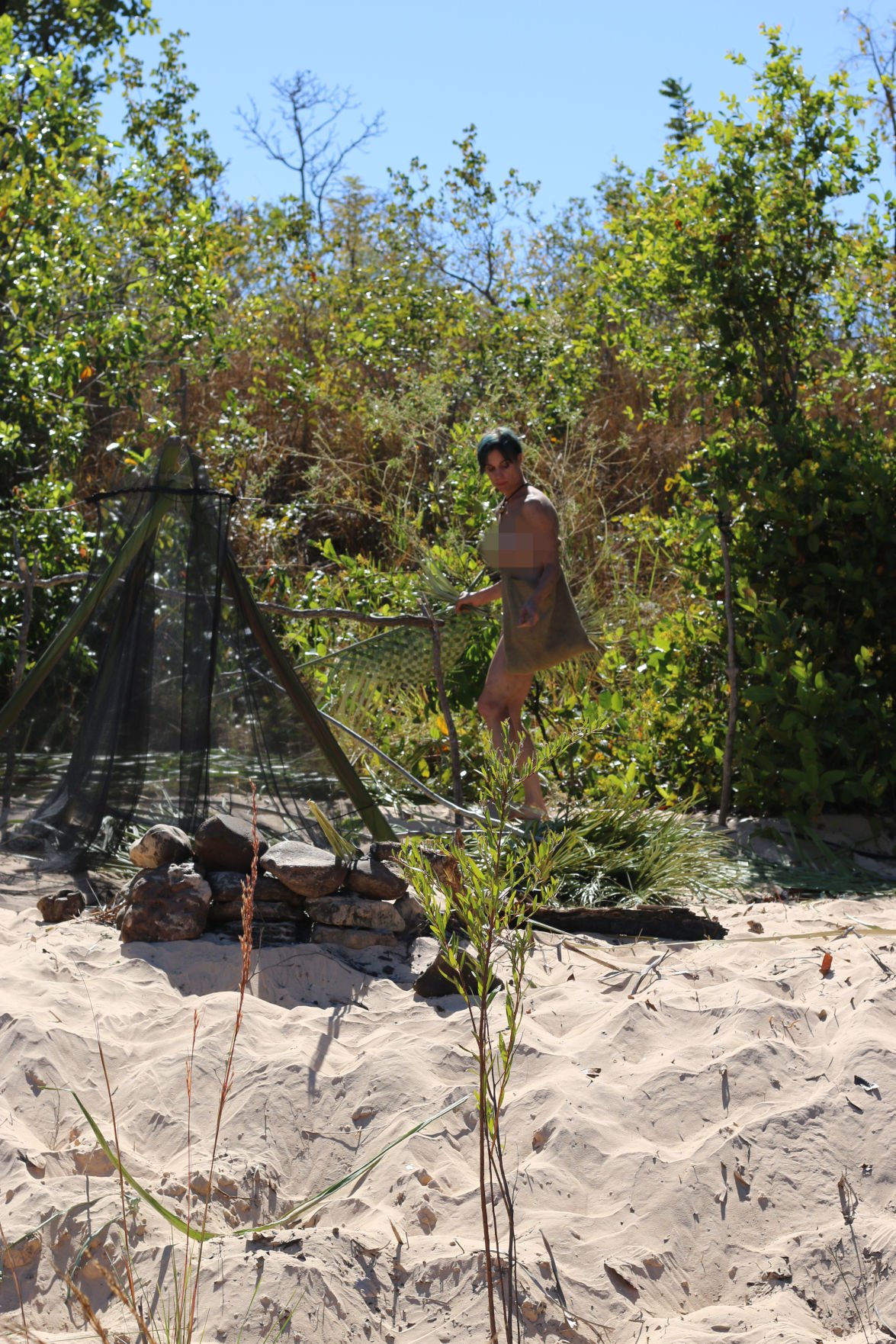 Suzänne Taylor reinforces her shelter with the palm fronds. 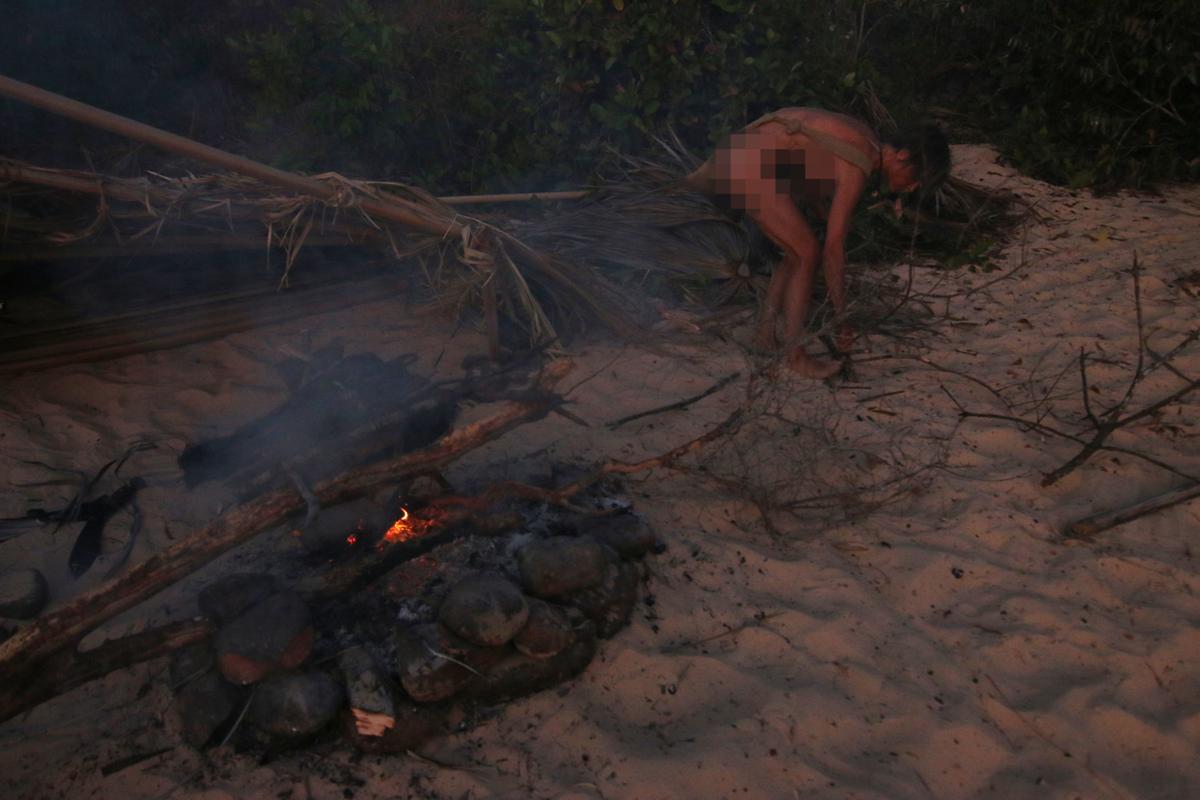 Suzänne Taylor picks up some sticks for her fire. 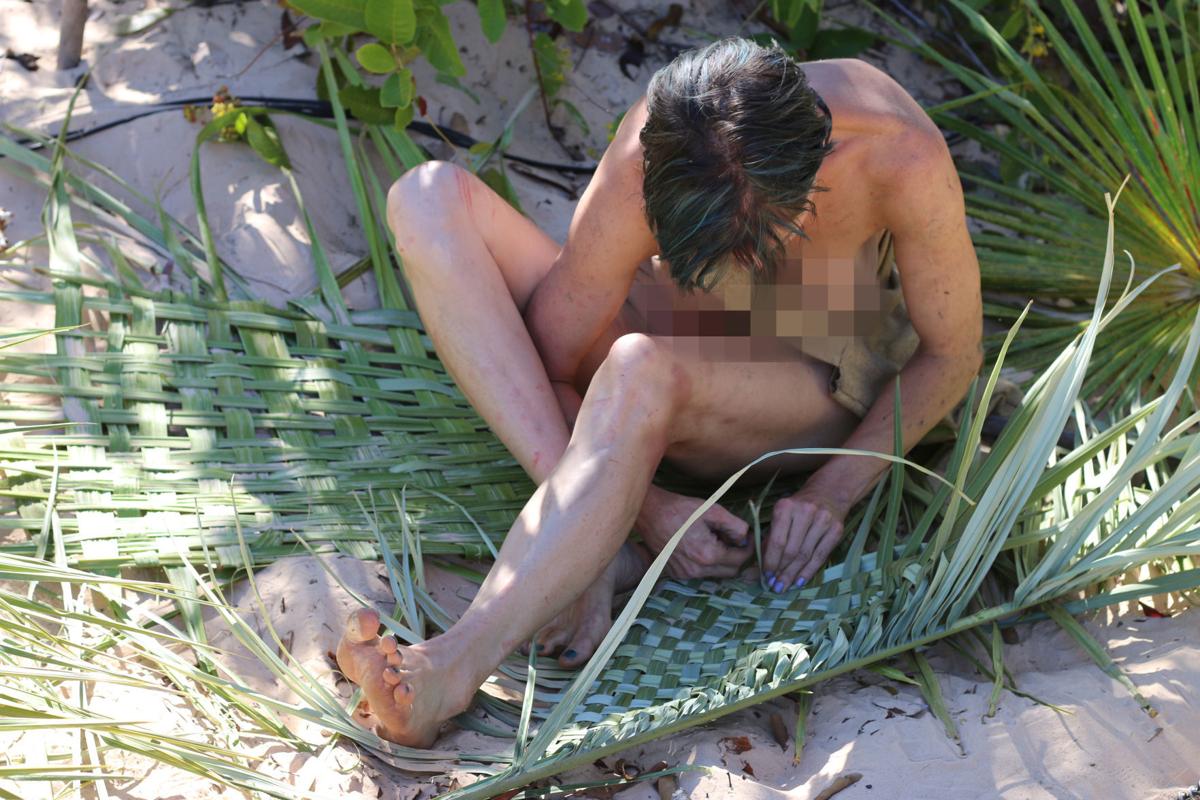 She grew up in a dysfunctional family in the backwoods of rural Missouri, quit high school but later earned a doctorate and now is the mother of four boys on whom her life centers.

It was those boys — Justin, Camden, Griffin and Bronson — who urged and encouraged their mother, Suzänne Taylor, to take on her latest challenge: being a participant on a survival show.

This is a survival show with a twist.

“Naked and Afraid,” a Sunday night feature on the Discovery Channel since 2013, pits two people, usually a man and a woman, against nature somewhere in the wilds of the world.

And they’re naked, as in not a stitch of clothing. It’s a gimmick to be sure, but the nudity is soon forgotten as the pair struggles to find water and food against the backdrop of spiders, snakes, wild animals, wind, rain and storms to complete the journey in 21 days, in most cases, and all for no compensation.

Taylor’s goal was to survive 21 days in a remote region of Brazil and not “tap out.”

Did she make it? Mum’s the word until Sunday, May 13, which appropriately, especially for Taylor, is Mother’s Day. The show, the season finale, will air at 9 p.m. on the Discovery Channel.

Why tackle an off-beat survivalist mission?

“My boys wanted me to take on this challenge,” said Taylor, who lives in Ashland. “They kept saying, ‘Mom, you’d do way better than she did’ and ‘You would be awesome. You should be on [the show].’ They kept saying it, and after a few weeks, I said, ‘Fine. I’ll apply.’

“So it started because they wanted to see me take on the challenge, but it ended up including me wanting to know more about me.

“As an adult, I’m very proud of how the ‘little-girl me’ made it through her childhood — how strong and resourceful she was, how she cared about doing good for other people, how she did not turn into a product of her environment. But would that little girl be proud of the adult me? Am I still as independent and resourceful? Or did I go soft? Am I changing or hiding parts of who I am to please others, to win their love? What would she think about me today?”

Certainly, a lot. Taylor is not idle in body or mind. When not at work, she hikes; camps; swims; plays in trees; reads; participates in mud races, snow skiing, yoga, gymnastics and SCUBA.

“I even did open-water diving with sharks,” she said. “I love learning new things. I suppose it’s easiest to say that I love having new challenges of my physical, intellectual, emotional and social abilities.”

“Naked and Afraid” was one such challenge.

After going through serious medical and psychiatric testing, Taylor was selected for the show. In July, she was given 18 hours’ notice that her flight would be leaving for Brazil.

“I was in a very beautiful and very remote region, so remote that it took hours of driving on a dirt road, and there were no satellites, no planes, no evidence of humans.”

The only humans were a camera person, a sound person, a field producer and a local medical person — all of whom left every night — and, of course, Taylor and her partner — both naked when they met.

Taylor’s reaction to the introduction was Taylor-like.

“Most people want to know what it’s like to meet someone totally naked,” Taylor said. “For me, it’s really not a big deal. I figure we all have a human body that pretty much looks male or female. And being in health care, I’ve seen plenty of naked humans.

“Literally, it was, ‘OK, let’s get to know this guy and see what his skills are, and I’ll backfill and do the things that he doesn’t want to do.’ I guess that’s the tendency of mine to be a people-pleaser. I really went into the challenge excited to meet someone who was willing to put his skills to the ultimate test. I’m confident in all of my basic, primitive survival skills, so I wanted to learn whoever my partner was and make sure that I used my skills to complement his.”

Taylor said the biggest challenge of the venture had nothing to do with location, lack of water or food or traipsing through an unknown land.

“The most difficult part for me was worrying about potential ‘haters’ judging me on my decisions and actions,” she said. “I still have that worry. My boys and I talked about it before I left. I told them there’d be haters on the internet talking-trash about their mom. How did that make them feel? They reassured me, ‘Mom, there’s always gonna be haters, but we’ll always love you no matter what you do.’

“People wanted to know if being away from my boys for so long would be/was difficult. Of course, I love having as much time as possible to be with my boys. What made this easy was their love and support. They wanted me to enjoy it and ‘kill it!’ ”

Taylor realized quickly that “Naked and Afraid” was no joke.

“The scariest thing was realizing that I was ‘free to fail,’ ” she said. “I think this reality set in within the first few days. If I couldn’t figure things out or take care of myself, I could seriously hurt or even kill myself.

“So for any doubters out there: I’m telling you that it is 100 percent real. There is no scripting, no planning, no ‘re-do’ of situations. It’s real. I absolutely had several chances to get myself seriously hurt, and I even had a great chance to kill myself.”

Despite the challenges of surviving without help, Taylor had one overriding apprehension.

“My biggest fear was letting my boys down by not being as strong as they think I am,” she said. “I know that regardless of how things went, they will love and respect me. I’m also pretty sure that they know that each day I was trying my best and making the best decisions with what I had to work with at that time. Regardless, I want to make them proud of me, not only as their mother, but as a strong woman.

“I also worried about letting my little girl [inner child] down by not being as strong, independent and resourceful as she was, and I worried that after the challenge I would second-guess and use hindsight to belittle decisions I made, actions I took, how I handled myself.”

Does Taylor wish she hadn’t participated in “Naked and Afraid”?

“No,” she said. “This was a wonderful experience, and I’m so thankful that I had this opportunity. In a heartbeat, I’d do it again. As a matter of fact, I’m planning a modified version to have my boys spend some — clothed — time surviving primitively with me. And they don’t know this yet, but they’re going to enjoy some of the proteins [food] that I enjoyed.”

“I love my role in life of being a mom. I love spending time and doing things with my boys — and teaching them to have fun trying new things, learning new things and living life.”

Occupation: trained as an occupational therapist; currently a researcher and educator in oncology at VCU.

Compensation: None. “The challenge is purely for the sake of the challenge,” said "Naked and Afraid" participant Suzänne Taylor of Ashland. “This is not at all like some other shows where the participants are trying to win, get, earn money.”

Support team: None, although a three-person production crew and a medical person are in the vicinity for eight hours during the day. A plan is in place to evacuate someone if there is a medical emergency.

Cameras: GoPros are used to capture wildlife in the region, and cameras are set up at night at camp. Participants are given small video cameras to use as a "diary cam" to record thoughts and record what the participants are doing for 16 hours after the production crew leaves in the evening.

Available food: Bugs, snakes, etc. “Foods that I can’t seem to find at the grocery stores here in Richmond,” Taylor said. “Hmm. Guess there’s not much of a market? One of my favorite things, which was still moving when I ate it, would pair nicely with a crisp riesling.”

Weight loss: “You know better than to ask a woman about her weight. Ha ha! What I will tell you is that I certainly didn’t gain weight during this challenge.” Rumor is Taylor’s loss was in the double digits.

Energy level: “I’m blessed with incredible levels of energy, which means they could drop in half and I’m still running pretty darn good. I did notice that my muscle strength was decreasing as time went on, so I had to modify tasks to make sure I could get things done without hurting myself.”

Training: “You need to know the basics of how to build a shelter and fire, how to source water, but in my opinion, being a survivor means you are resourceful. You have the ability to objectively look at the environment, the situation and what you need - and you make it work. A true survivalist is able to take basic concepts about survival and apply them to novel settings. And the top level, a primitive survivalist, has to be able to create, make and develop everything they need, including clothing, if needed, to protect from the elements, such as cold temperatures, swarms of bugs and walking on rough terrain.”

Taylor’s take: “What I did ‘train for’ was starvation. I know that knowledge is power, especially in survival situations. I wanted to really understand the physiological process of starving so that I would have an idea of what would happen in my body and how I would feel or sense these changes. I stopped eating a few days before the challenge. Yup. I chose to starve myself in preparation for starving.”

Once back: “It took a couple of weeks before I could take a shower — be wet — without feeling like, ‘any second now I’m gonna be stung’ because I got really used to getting stung, all the time, every day, and especially if I was wet.”

Gwyneth Paltrow cut back on alcohol after battling Covid-19

Suzänne Taylor quickly finishes one fish trap to start on another.

Suzänne Taylor reinforces her shelter with the palm fronds.

Suzänne Taylor picks up some sticks for her fire.