In years past unless you made it to a theater multiple times, you probably didn't get a chance to see all the films nominated for best picture at the Oscars.

But COVID-19 changed that.

With most theaters closed due to the pandemic, streaming became the way to enjoy many of the latest films.

The 93rd Academy Awards are happening Sunday and here's how you can watch this year's movies nominated for movie of the year:

"Judas and the Black Messiah"

We first came to love the pairing of Daniel Kaluuya and LaKeith Stanfield in Jordan Peele's 2017 social horror film "Get Out."

Kaluuya and Stanfield are now both nominated in the best supporting actor category for their roles as Black Panther leader Fred Hampton and the man the government used to help infiltrate Hampton's organization, William O'Neal, respectively.

It is currently available to rent on Amazon Prime, Apple TV, Google Play, Vudu and YouTube.

This black-and-white drama about the making of "Citizen Kane" as told through its screenwriter Herman J. Mankiewicz (played by Gary Oldman who is nominated for best actor) is a Netflix original and can still be found streaming there.

Amanda Seyfried (who is nominated for best supporting actress) and Charles Dance co-star in the David Fincher (up for best director) directed film.

This tale of a Korean-American family relocating to Arkansas to pursue the American dream feels both timely and timeless.

Steven Yeun stars as the family patriarch and he is the first Asian-American to ever be nominated for a best actor Oscar.

His costar Yuh-Jung Youn is the first Korean actress nominated in the best supporting actress category.

Frances McDormand is often the belle of the Oscars ball and it will remains to be seen if that happens again this year.

"Nomadland" stars the esteemed actress as a woman who joins a community of van dwellers who travel across the country doing gig work.

The film is available for streaming on Hulu and rental on Amazon Prime, Apple TV, Google Play, Vudu and YouTube.

Carey Mulligan stars a woman who lives a secret double life and is out to get revenge for a crime committed.

Like McDormand, she's nominated for best actress and the films director, Emerald Fennell, is also nominated — marking the first time two women are nominated in the directing category.

Riz Ahmed's portrayal of a heavy-metal drummer losing his hearing has made him the first Muslim to be nominated in the best actor category.

It's an Amazon original production and available for streaming on Amazon Prime.

At 83 years young, this film's star, Sir Anthony Hopkins, is the oldest best actor nominee in the history of the Awards.

Hopkins stars as a man struggling as he slips into dementia and Olivia Colman portrays his daughter. Colman is nominated for best supporting actress.

"The Father" can be rented on Amazon Prime

"The Trial of the Chicago 7"

An intended peaceful protest at the 1968 Democratic National Convention turned violent and resulted in the organizers, including Abbie Hoffman, Jerry Rubin, Tom Hayden and Bobby Seale, being charged with conspiracy to incite a riot.

Their trial became the basis for this film, which nabbed six nominations, including original screenplay and best supporting actor for Sacha Baron Cohen.

The movie is streaming on Netflix.

Oscar predictions: Can anything beat 'Nomadland'?

'JUDAS AND THE BLACK MESSIAH'

Remind everyone that Oscar voters loved LaKeith Stanfield's phenomenal turn in this movie so much that they nominated him for supporting actor, ignoring Warner Bros.' recommendation to place him in the lead actor category.

If Stanfield and co-star Daniel Kaluuya, the two actors playing the title characters, are supporting, who is the movie's lead? Perhaps the question should be rephrased: What is the movie's lead? Answer: Its timeliness. Though the events in the movie take place 50 years ago, its chilling look at systemic racism — the FBI-engineered police killing of Black Panther leader Fred Hampton — makes it profoundly relevant and, perhaps, the most important movie among the nominees. Consider that.

We'd like to thank the academy for the 10 nominations. Have we mentioned that it's the most-nominated movie of the year? We have? Well, that's because just about every branch in the academy (except for the writers; we don't know what they were thinking) recognized the considerable craft that went into this film. We realize that the academy's membership has changed in recent years, so the movie's evocation of Old Hollywood might not give younger voters — how do the kids put it — ummm, the feels?

Also, if you haven't, check out this "Citizen Kane." It's pretty good. And it might help you appreciate our movie.

One wise critic called "Minari" a "balm," and we know you've been feeling that. We never expected all this love. It reminds us of another intimate, personal movie from a few years ago, "Moonlight," which — what do you know — just happened to be made by A24 and Plan B Entertainment, the same companies behind "Minari." Huh.

Do you think history can repeat itself? If SAG Awards voters give our wonderful cast its ensemble prize, that'd be a nice start. Besides, who doesn't want to see the adorable and accomplished Alan Kim celebrating (and maybe chugging down Mountain Dew?) in a tuxedo. Let's make this happen.

If you've seen the movie, you realize how you feel when you spend more time being happier with what you have than unhappy with what you don't have. What we have, right now, is pretty much every best picture award from the past year. What we don't have is the Oscar. Yet. See you down the road.

It's furious. And ferocious. Did we say funny? Because it's pretty freakin' funny too. What other F words can we use? Fennell! Emerald Fennell. You gave her three Oscar nominations, for writing, directing and producing this furious, ferocious and funny movie. And you also nominated our star, Carey Mulligan, who, no matter what that Variety critic wrote (and thank you, Variety, for displaying such integrity and courage to apologize, nearly a year after the review ran, for minimizing her daring performance), is probably going to win the Oscar for lead actress.

Plus you gave us an editing nomination too. Picture, director, writing, editing, acting — add them all up and you have all the precursors needed to win. Fabulous!

You don't need to fix anything here. Six nominations? That's beautiful. We've got a little assignment for you, though. You get up early, right? Get some hot coffee, maybe a doughnut (vegan's OK), go to a quiet room and just sit. And write. It doesn't matter what you write, how you write or what you write about, though it'd be nice if maybe you'd reflect on "Sound of Metal" and how it conveyed a few things we all went through and learned during this past year. And then remember those thoughts when you fill out your ballot.

'THE TRIAL OF THE CHICAGO 7'

And this movie is at least as good as those two films. Maybe better. It could well win the SAG Awards ensemble honor because — look at the title: "Chicago 7." And there were actually eight defendants at the start. Add in the lawyers and the judge and you've got a BIG ensemble of great actors. All men. But those were the times.

Anyway ... where were we? Oh, SAG ensemble plus maybe the Producers Guild best picture prize and we're back in business, Sorkin "snub" be damned.

A viewer's guide to tonight's Oscars

Here's everything you need to know about the 93rd Academy Awards, including who's nominated, when to watch and what to expect. 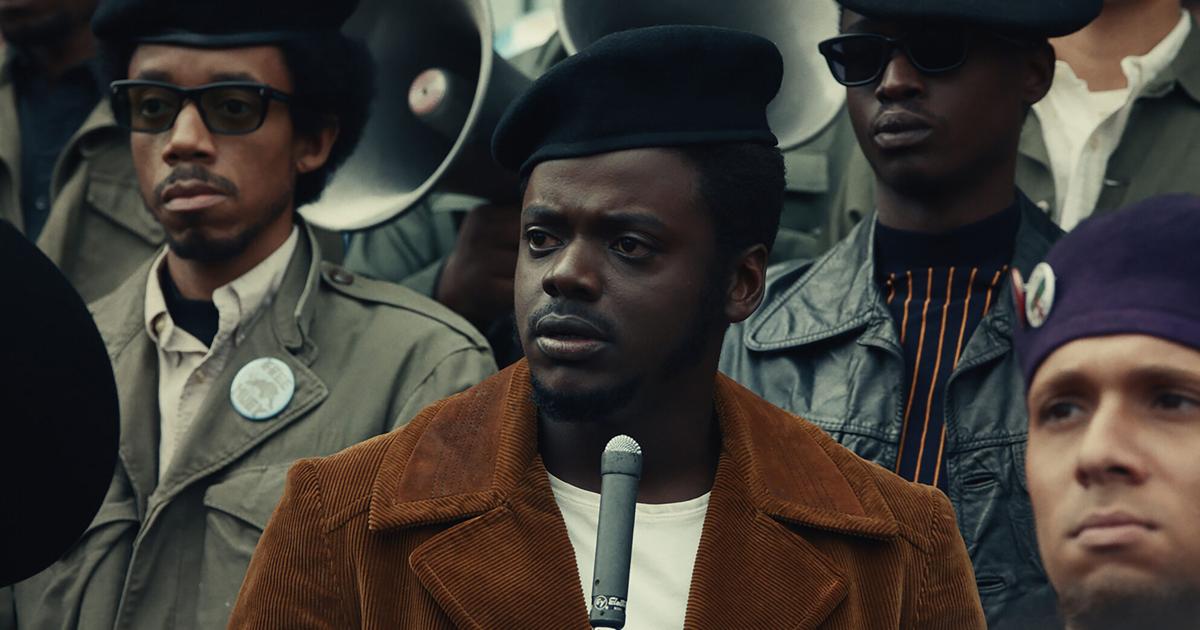 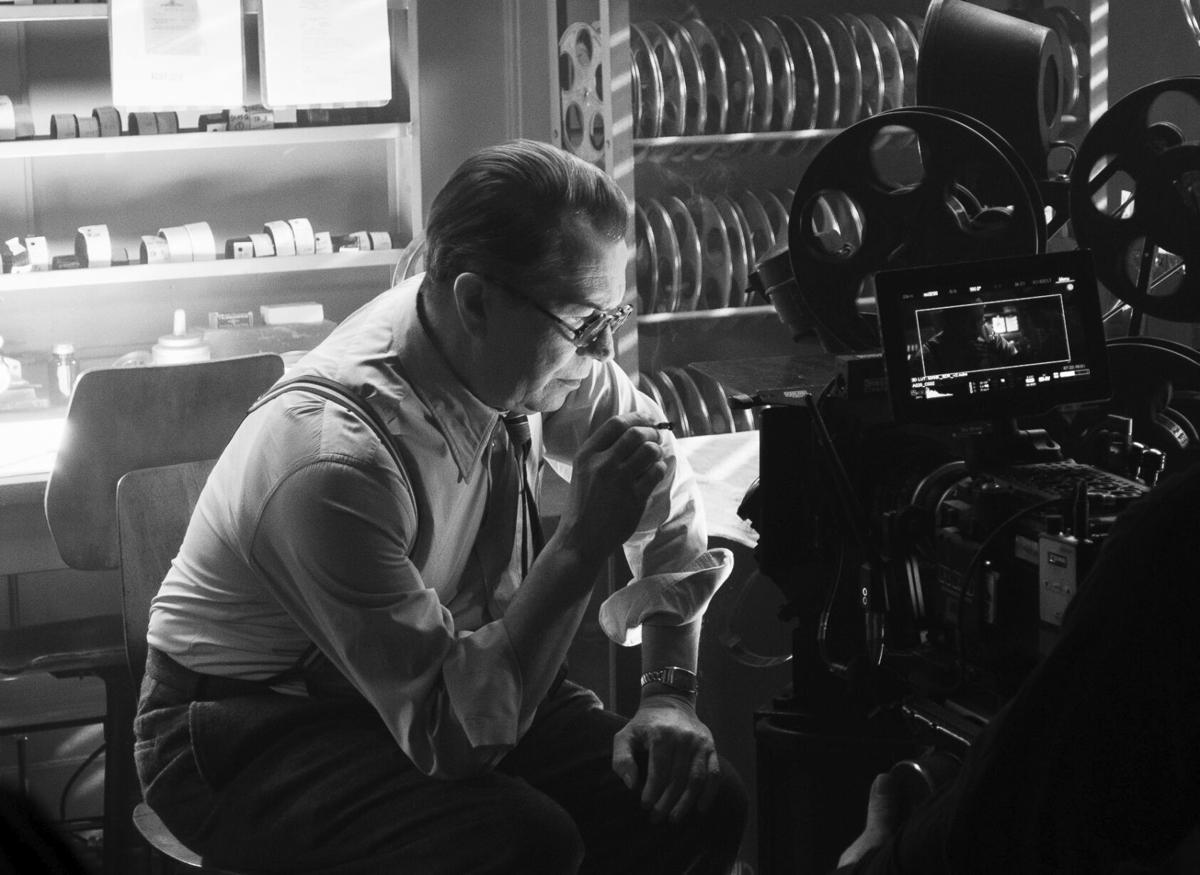 In this image released by Netflix, Gary Oldman portrays Herman Mankiewicz in a scene from "Mank." (Nikolai Loveikis/Netflix via AP) 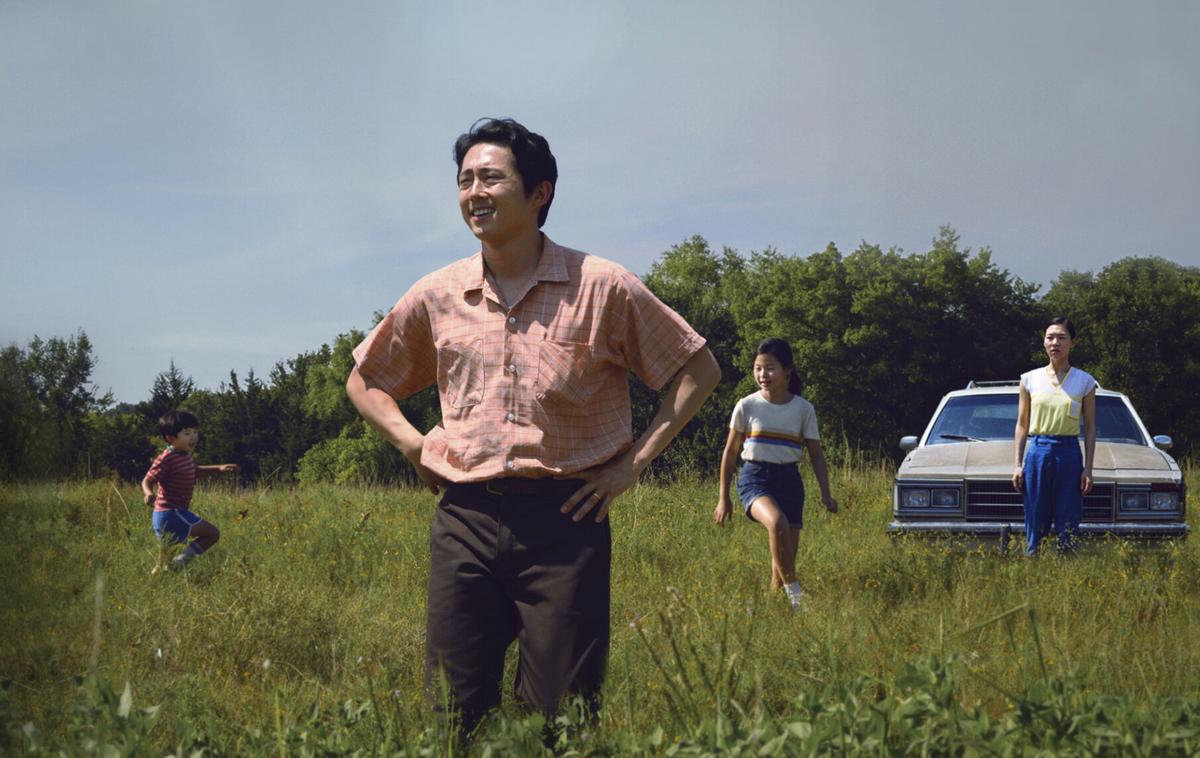 This image released by A24 shows Steven Yeun, foreground, in a scene from "Minari." (David Bornfriend/A24 via AP) 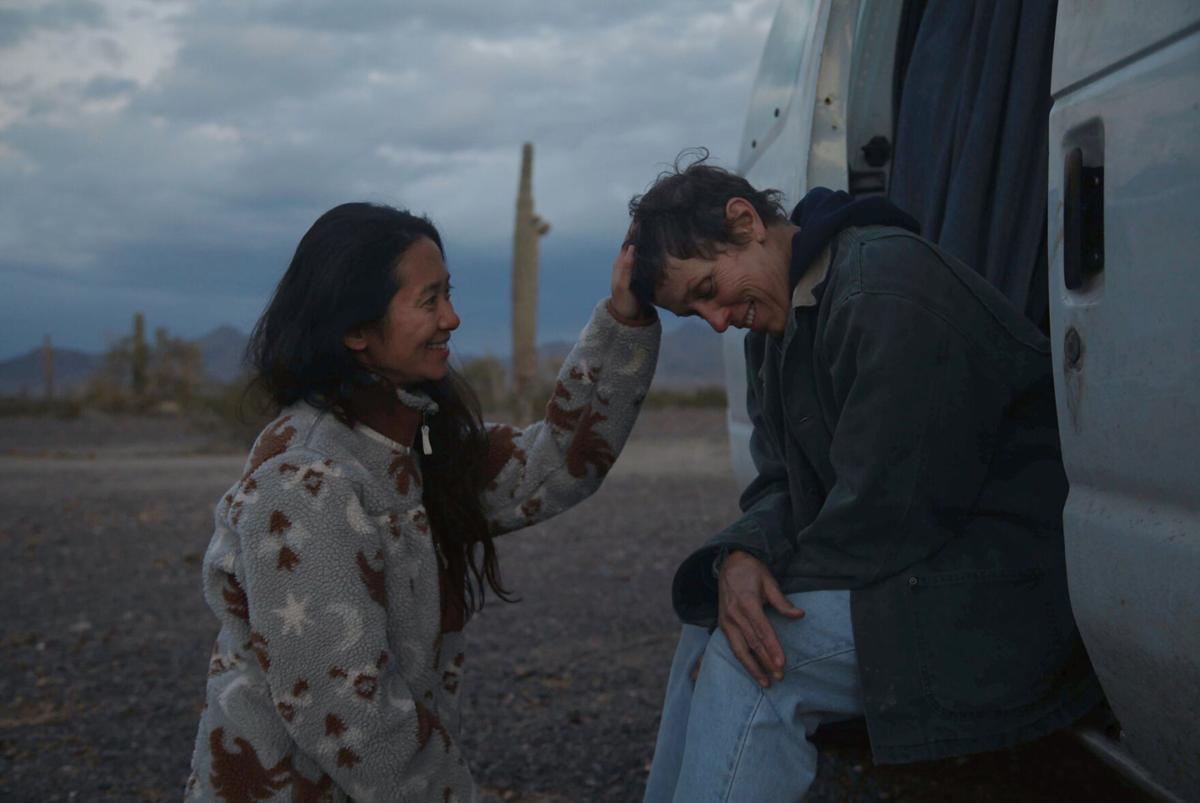 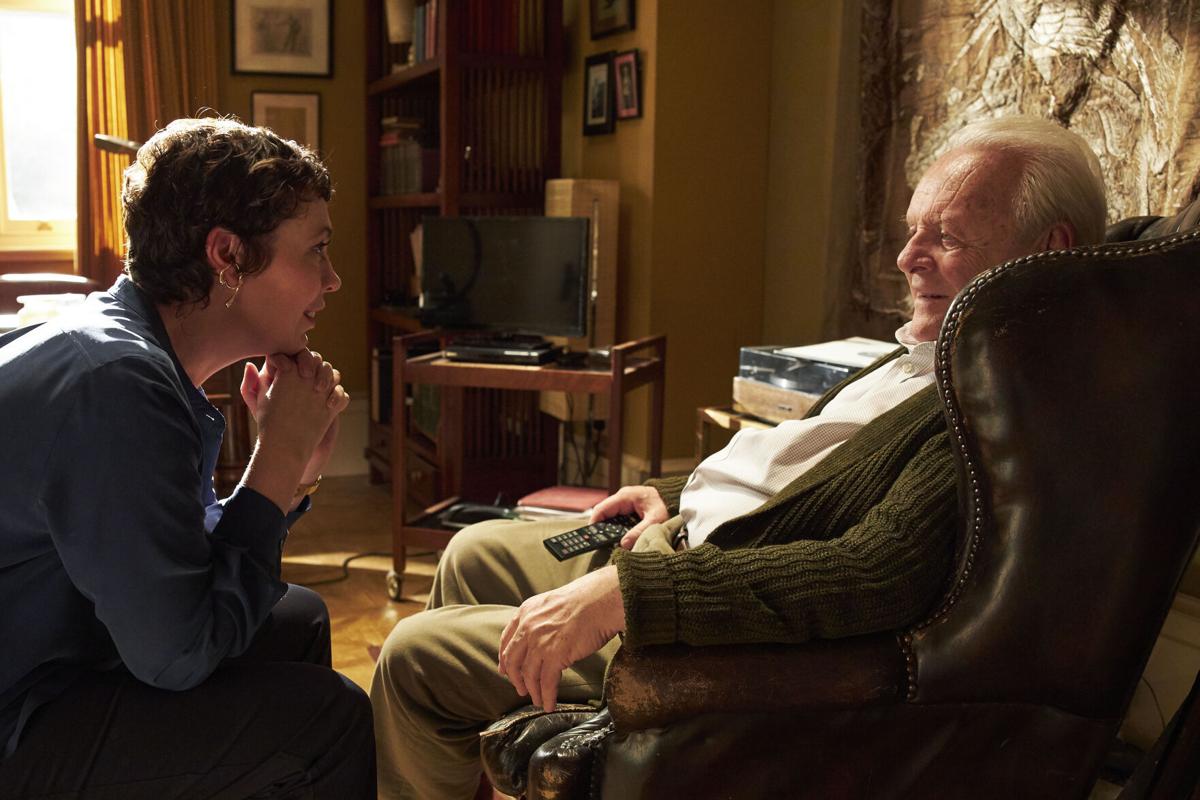 Olivia Colman as Anne and Anthony Hopkins as Anthony in "The Father." (Sean Gleason/Sony Pictures Classics/TNS)

This image released by Amazon Studios shows Riz Ahmed in a scene from "Sound of Metal." Ahmed stars as a punk metal drummer who experiences sudden severe hearing loss. (Amazon Studios via AP)