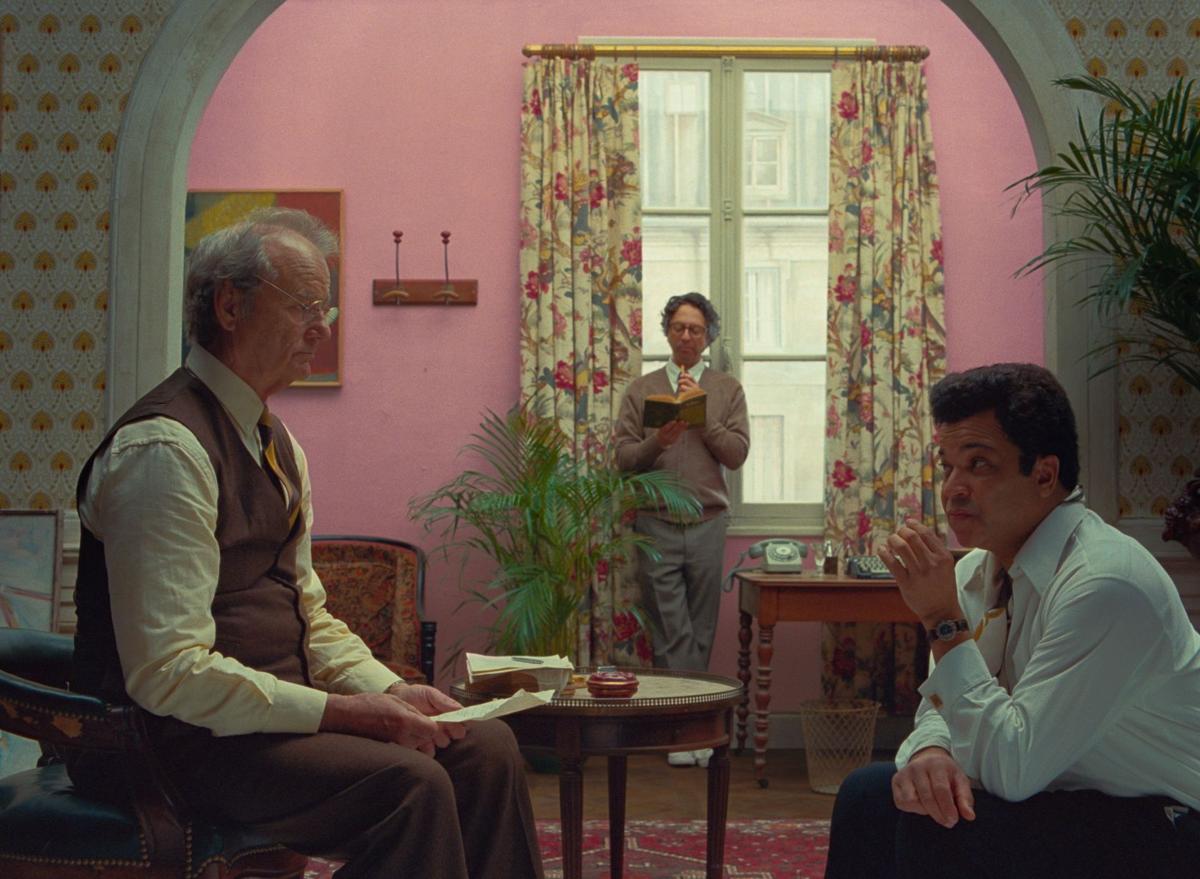 Bill Murray (from left), Wally Wolodarsky and Jeffrey Wright star in this film that’s like a mid-20th-century The New Yorker, but published in a French town of eccentrics. 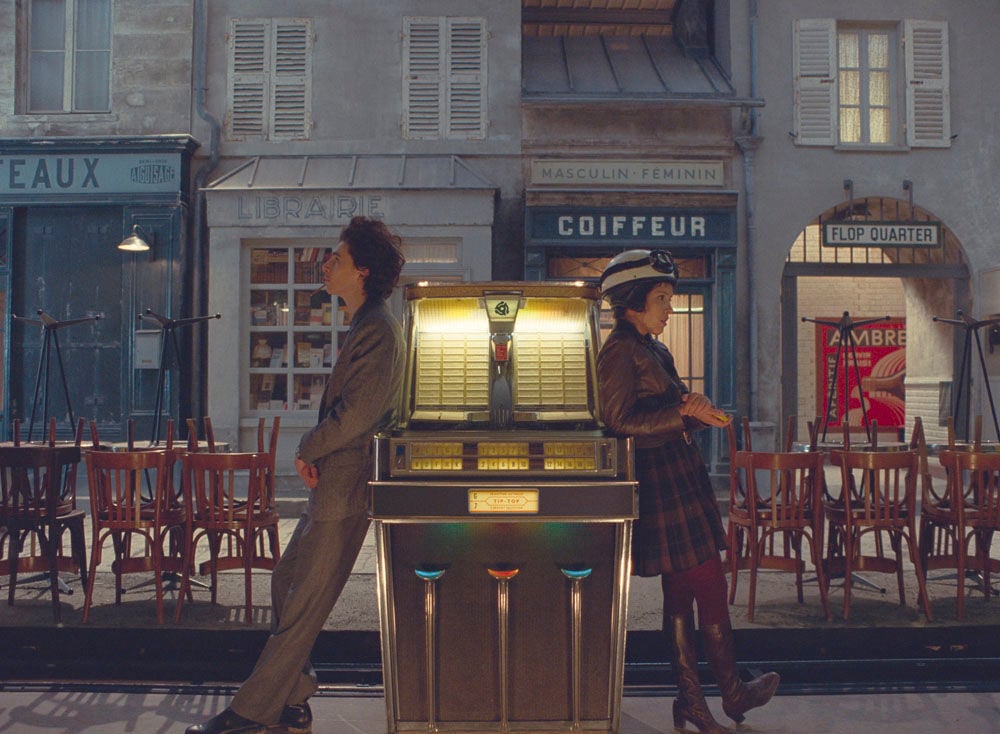 An account of a student strike in France led by students Zeffirelli (Timothée Chalamet and Juliette (Lyna Khoudri) is one of four stories that unfold in “The French Dispatch.”

By Moira Macdonald The Seattle Times

A Wes Anderson movie is recognizable from its first seconds; sitting down to one feels like spotting a friend in a crowd — a rare dream these days — and realizing how much you’ve missed them. “The French Dispatch,” his latest, looks like so many of Anderson’s previous films: the carefully composed shots with an actor centered in the middle; the softly faded colors (though much of his film is shot in artful black and white, or occasional playful animation); the familiar cast of players; the camera lingering on objects of nostalgia, such as, in this case, typewriters.

But Anderson isn’t just resting on his long-established visual language here; he’s playing with something new — the film equivalent of a magazine, as a way of paying tribute.

Essentially, “The French Dispatch” is a mid-20th-century edition of The New Yorker magazine, if it were published in a small French town and everyone involved was picturesquely eccentric. It doesn’t really have a plot, just a central event: Arthur Howitzer Jr. (Bill Murray), editor of The French Dispatch of the Liberty, Kansas Evening Sun (a Sunday supplement magazine published abroad), has died, and the staff has gathered to write his obituary.

Four mostly unrelated stories unfold, from the magazine’s pages: a travelogue led by a beret-wearing Owen Wilson; a tale of a mad artist/convict (Benicio Del Toro) who becomes the talk of the art world; an account of a student strike in France, led by two students appropriately named Zeffirelli (Timothée Chalamet, hair serving as exuberant punctuation to his performance) and Juliette (Lyna Khoudri); and a sort of Andersonesque French crime drama, dictated by legendary writer Roebuck Wright (Jeffrey Wright), that’s intended to be a portrait of a famous chef (Stephen Park) but comes out as something else entirely.

All of this unfolds in a charmingly deadpan way, performed by a troupe of actors who seem to be having a blast. (It’s evidence of how Anderson is revered by actors that so many respected names are here in tiny parts; watch carefully to spot Saoirse Ronan, Elisabeth Moss and Christoph Waltz, to name just three.) Though it’s hard to pick a standout, I’ll single out Tilda Swinton, whose caftan’d character J.K.L. Berenson is the gloriously affected sort who speaks all her words as if she’s tearing them off with her teeth.

And Murray, 23 years after his exquisite turn in Anderson’s “Rushmore,” here delivers another quiet gem, as a nonshowy editor in an office full of preening writers drawn in various shades of diva. (There’s one who never writes anything but nonetheless “haunted the halls for three decades,” we’re told.) Howitzer, like all great editors, just wants the writing to be as good as it can be — “Try to make it sound like you wrote it that way on purpose,” is his trademark (excellent) advice. His office is rendered in the bright yellow of a Ticonderoga pencil; his presence is low-key. In one scene, with writer Lucinda Krementz (Frances McDormand, dry perfection as always), he’s just silently reading, caught up in what she’s created.

“The French Dispatch” is an elegant ode to good writing, and to those who quietly stand behind the words.

Rated: R (for graphic nudity, some sexual references and language)

This Thanksgiving weekend is offering a box office feast with two genres that have been lacking on the menu so far this year: family movies and non-franchise films aimed at adults.

Everything in “House of Gucci” is over the top. The accents. The performances. The fashion. The settings. The runtime. The music. The greed. T…

Mirabel is extraordinary, in that when it comes to her family, she is totally normal.

Here's a list of films set to premiere this holiday season through Jan. 28.

There’s a lovely pair of sounds that you hear throughout “King Richard,” Reinaldo Marcus Green’s endearing film about the upbringing of tennis…

Tom Hanks’ best acting partner may be an inanimate object.

Bill Murray (from left), Wally Wolodarsky and Jeffrey Wright star in this film that’s like a mid-20th-century The New Yorker, but published in a French town of eccentrics.

An account of a student strike in France led by students Zeffirelli (Timothée Chalamet and Juliette (Lyna Khoudri) is one of four stories that unfold in “The French Dispatch.”