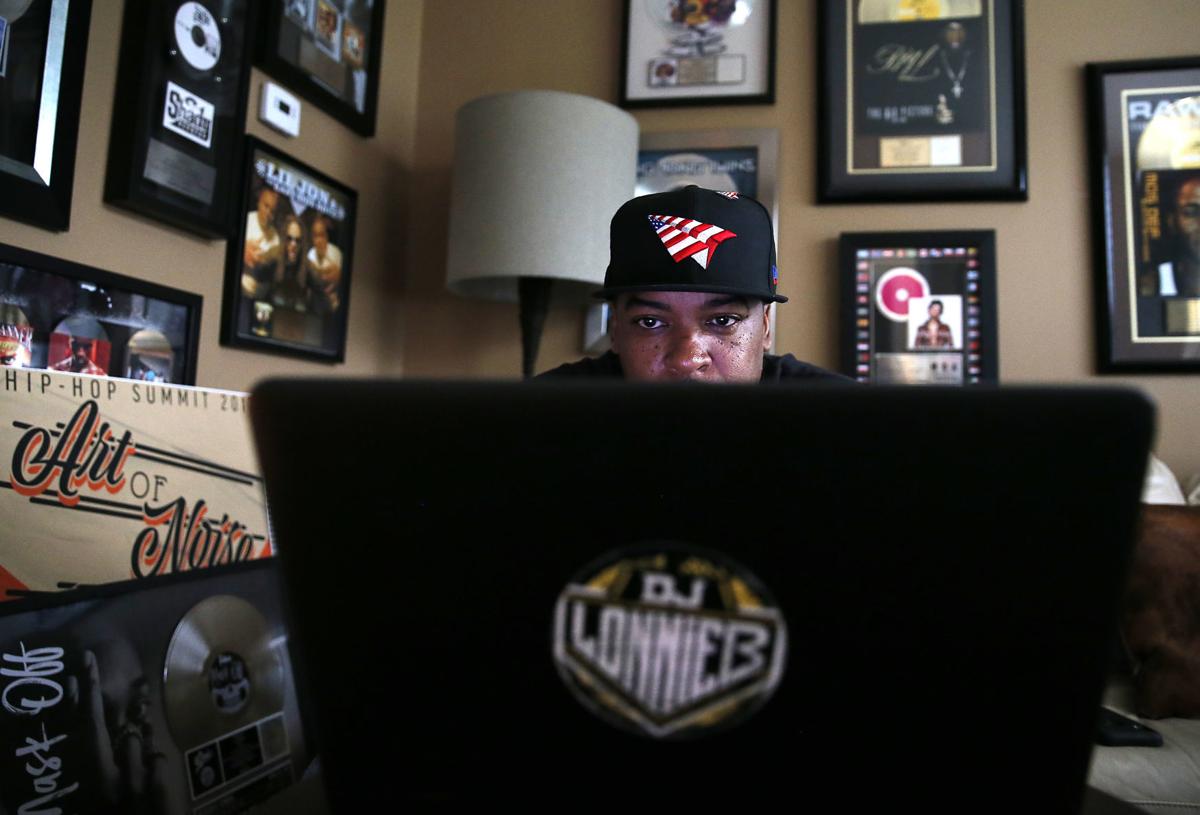 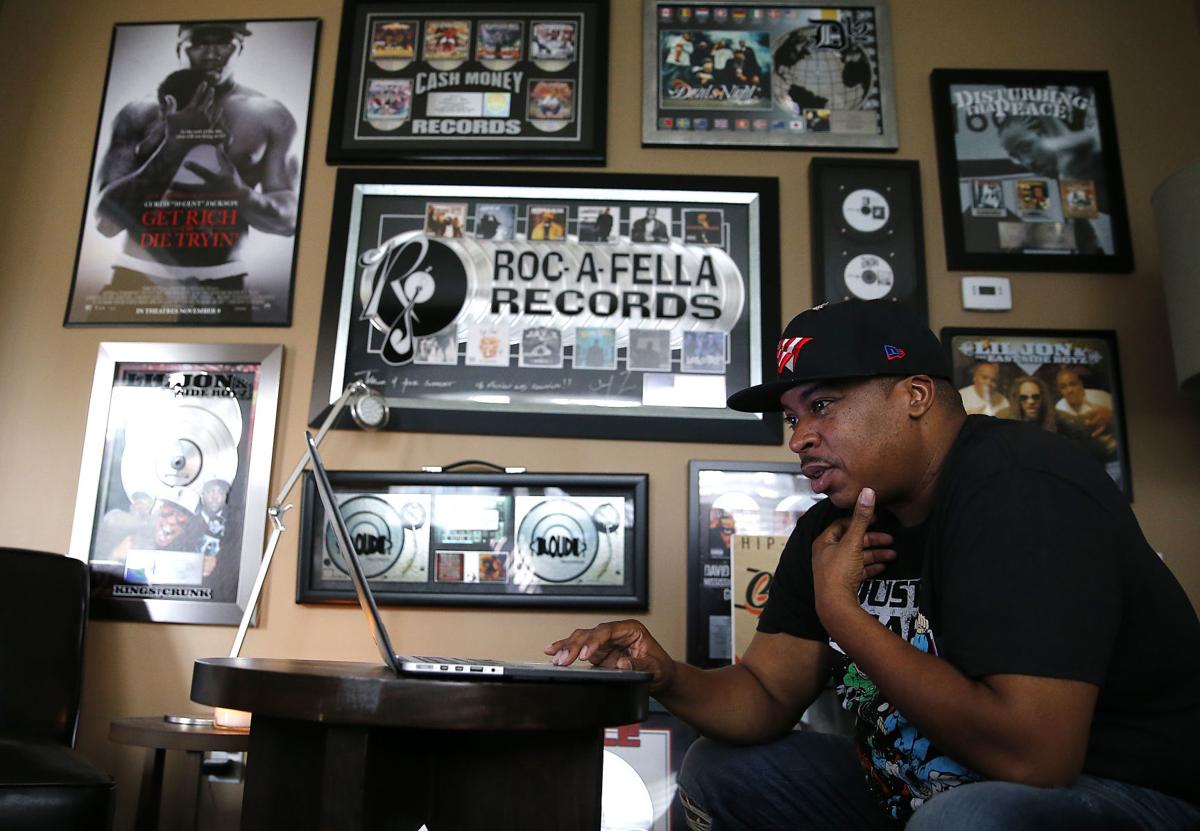 DJ Lonnie B organizes music at his Midlothian home. His collaborator Kelli Lemon says Lonnie B “does research like no other to make sure that he can execute it to a level that is unseen.” 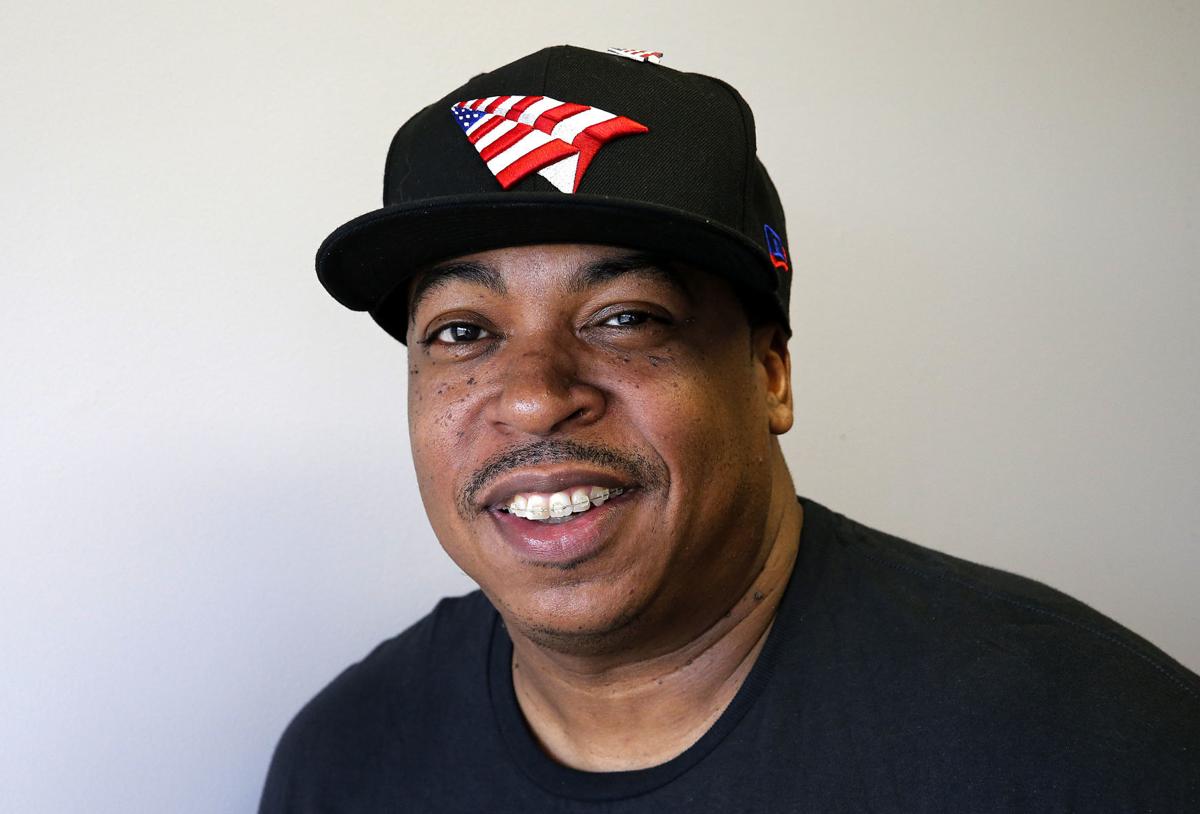 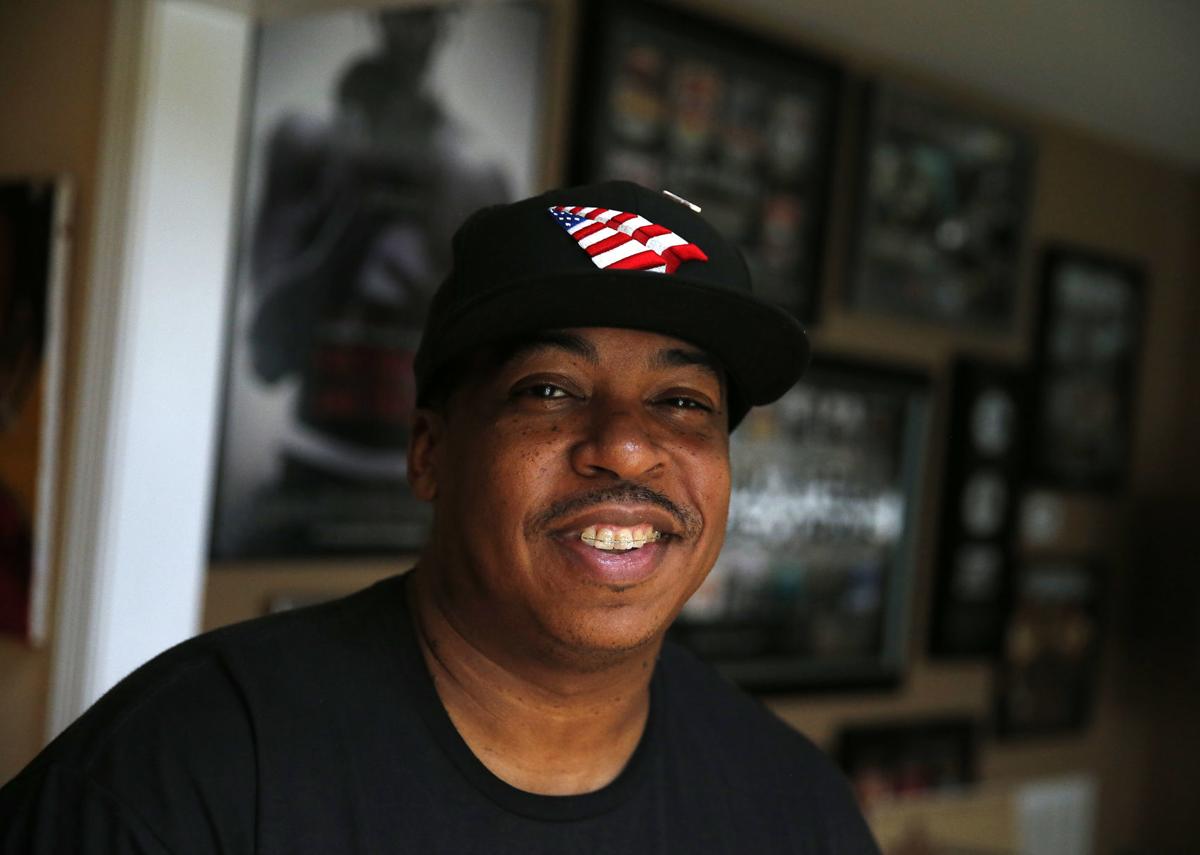 South Richmond native DJ Lonnie B puts on the music event Art of Noise, and his 14-year-old daughter, Aliyah Battle, is now deejaying. 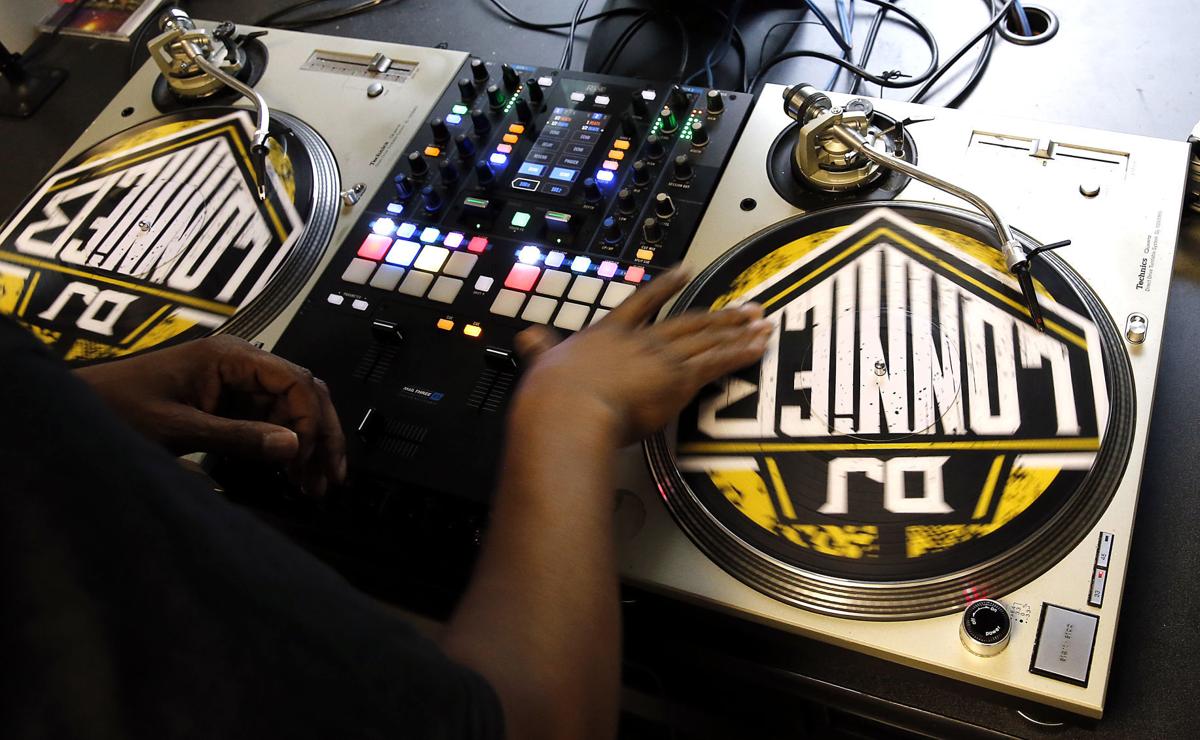 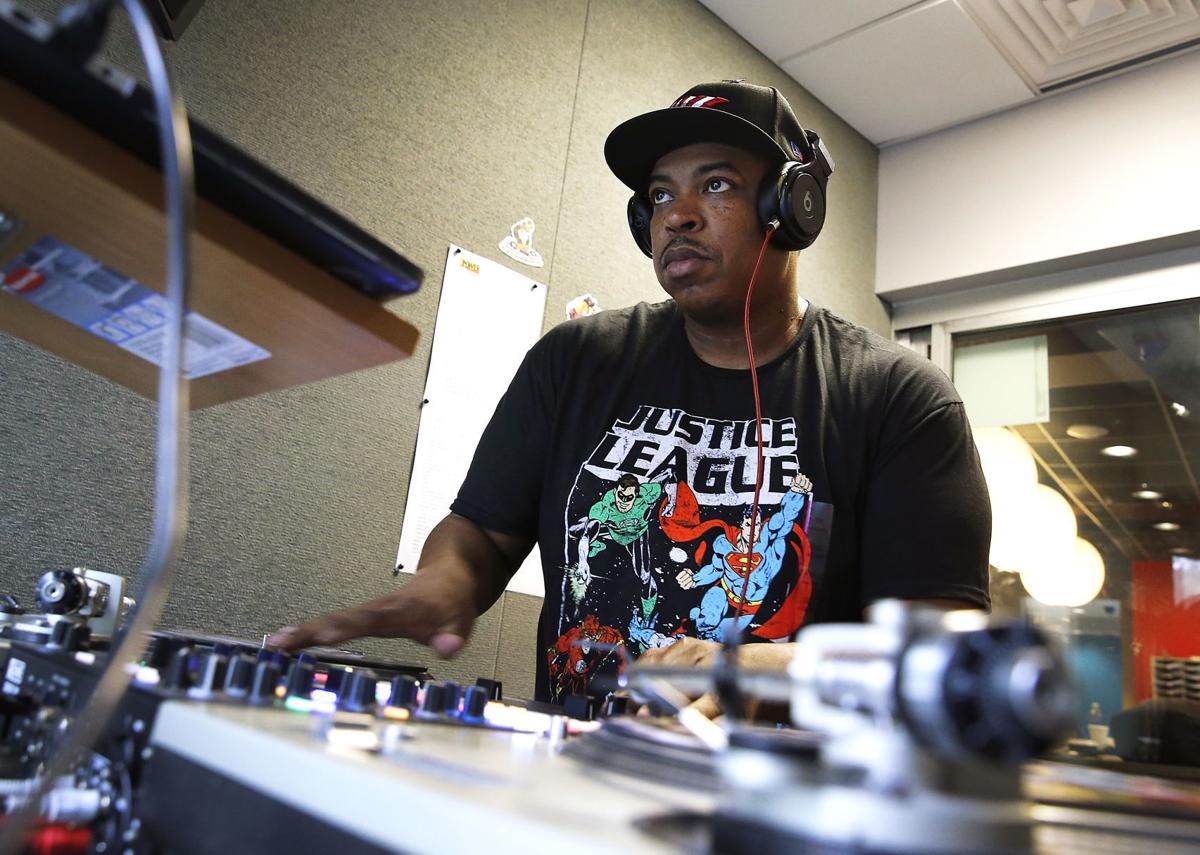 Early cancer detection saved DJ Lonnie B’s life and changed his outlook. He regularly broadcasts from Radio One in Henrico.

By the time the cancer showed up, Lonnie Battle had traveled around the country with his turntables and heard thousands of fans cheer for DJ Lonnie B.

Once, he performed onstage in New York alongside Aaliyah.

By any measure, he’d become a success.

Yet here he was, in 2013, contemplating life after a doctor diagnosed him with testicular cancer.

He had a wife and three daughters. But he wanted a son, too.

Who, he wondered, would care for his family if he died?

And then, just as randomly as his cancer diagnosis, was the outcome. He had surgery but didn’t need radiation or chemotherapy. Early detection saved his life, and the fear of death crystallized his outlook.

As he prepares for his Art of Noise tour stop at The National in his hometown Sunday evening, he’s thankful to be here. And at 43, he carries the lessons of a life he knows could have gone differently. Chief among them: Do what you love and not what you think might make you rich or successful.

His shows pull primarily from the music of prior decades: the range goes from Stevie Wonder to Jay-Z to Nirvana in a performance in which fans are encouraged to wear sneakers — not fancy clothes — and experience the art of deejaying.

The Richmond Times-Dispatch sat down recently with Lonnie B at Radio One in Henrico County, where he broadcasts regularly, to talk about his career, cancer and how the Art of Noise became so popular.

Lonnie Battle knew in ninth grade he wanted to be a deejay. But he almost screwed it all up.

He doesn’t remember if someone left the J.L. Francis Recreation Center unlocked or if he and his friends broke in, but when they were there, they ate snacks and stole basketballs and a radio. The director investigated and ended up at Lonnie’s house.

“He could have called the police and turned me in but he heard that I wanted to be a deejay so he was like, ‘Well, instead of me doing that, I want you to deejay these dances up here at the recreation center every Friday.’”

And so he did. A deejay in his school, DJ Drake, trained him.

Lonnie grew up in South Richmond, the son of a single mother who worked for the state government to support him and his brother. As an ’80s child, he played records: The Fat Boys, Run-D.M.C., Michael Jackson, Prince. He grew up loving breakdance, rap and graffiti.

Deejaying at the rec center turned into deejaying neighborhood house parties on Friday nights. When he graduated from high school in 1992, his mother knew he wanted to go to college, he said, but they didn’t have the money. They made a deal: If he could wait a semester, she would buy him a turntable.

She missed a mortgage payment to keep her word and his career took off. He moved from house parties to hotel ballrooms and clubs, playing his first show at a long-defunct spot in Petersburg called Magic City.

Lonnie B said the owner, Mouse Jones, heard of him one night when attendance at the club was poor and he asked where people were. They said a deejay named Lonnie B was doing a party in Richmond.

Lonnie B said he’s never just played the music he wants to hear.

In 1995, Lonnie B began doing radio — starting with University of Richmond college radio station that probably didn’t draw much of an audience.

Every Saturday evening he and other aspiring rappers freestyle rapped on the show “U.R. House Party.”

He decided to form a group and expand their reach. He and his friends called themselves SupaFriendz, named after the D.C. Comics animated series “Super Friends,” which was popular in the 1970s and ’80s.

Donnie Lewis, who raps as Mad Skillz, was the first member of the group to land a major record deal, with Big Beat Records. Lonnie B traveled with Mad Skillz as a hype man to shows across the country.

Once, the group was asked to fly to New York on same-day notice to perform with the late R&B artist Aaliyah. SupaFriendz had made a cover of her song “Are You That Somebody” in which they rapped over her song. Radio stations began playing it and Aaliyah liked it so much she wanted the SupaFriendz onstage with her.

“I remember looking over at her as she was singing the words to my verse as I was saying it, which was shocking.” Lonnie B remembers Puff Daddy and Missy Elliott and big names of hip-hop were hanging out at a hotel afterward. “It was a surreal moment.”

Lonnie B could pack a club or a party, but as he aged, the crowds didn’t. And he told himself he shouldn’t get caught up in what he felt like he had to do to stay relevant. He should do what he loved.

So he started the Art of Noise, an event where Lonnie B’s love and knowledge of music is on display. The first event, on Thanksgiving night 2012, was at a club in Shockoe Bottom called Aqua Lounge.

About 100 people showed. He didn’t make a dime, but Lonnie B felt awesome.

He did the event again in 2013 and again after he recovered from cancer. When the crowd grew to 300 he moved to bigger venues, outgrew The Broadberry, and eventually filled 1,000 people into the Hat Factory, in what is now the CarMax building on the canal.

By the time he moved to The National, with capacity of about 1,500, the event still sold out. He’s hosted Art of Noise in New York, Philadelphia, Washington, and Durham, Raleigh and Charlotte, N.C.

Onstage alongside him are DJ Marc (real name Marcus Holland), Mad Skillz, Danja Mowf and Kelli Lemon, a Richmond entrepreneur and longtime collaborator with Lonnie B. Sometimes a national star like Biz Markie or MC Lyte joins them onstage as a surprise.

“It’s not about the performer, it’s about the party. So you’re really coming to the party to hear us play the music. And if someone comes out that’s just an added, you know, incentive. That’s an added bonus.”

With two turntables in front of Lonnie B and two in front of DJ Marc, Mad Skillz and Lemon handle the mics as emcees.

Lemon, who does radio and hosts the podcast “Coffee with Strangers RVA,” met Lonnie B and the SupaFriendz after moving to Virginia in 1992. When she began working for VCU in 1998 she used Lonnie B for events that needed music and they became friends.

“Lonnie became my go-to deejay, and he was Virginia’s deejay,” she said.

“We wanted to be taken back to a time when music was good to us,” she said. “One of the first Art of Noises was all records. That was the essence of being a true deejay. You could pull out those crates and really, really dig in them and find the transitions that you needed.”

Lonnie B, she said, will give the crowd a lesson in music.

“Lonnie is passionate, and not just about music,” Lemon said. “When Lonnie loves something he does research like no other to make sure that he can execute it to a level that is unseen.”

Lonnie B is not a churchgoing man. But when he was waiting to find out the results of his surgery for cancer, he heard a sermon at a church about beating the odds, and it remains with him.

He’s grateful to his wife, Leah, for telling him to get a second opinion after an initial diagnosis that the pain he was experiencing could be treated with medicine.

They live in Chesterfield County and now have a son, Lonnie III, who will turn 2 on Halloween.

He’s able to earn a living doing what he loves, and paid tuition for his oldest daughter, Alani, who will soon graduate from Longwood University.

He deejayed parties at the governor’s mansion for former Gov. Terry McAuliffe and did inauguration parties for the lieutenant governor and attorney general. He couldn’t do the inauguration party for Gov. Ralph Northam. He was already booked with the Art of Noise in North Carolina.

So his advice is to always get a second opinion, do what you love, and come to listen to the Art of Noise.

“Epic” is how Tom Cool Yolton recalls the show.

"And of course Black lives matter. Do we think our little white a**es are the only ones that matter? No!"

This year's awards show is introducing new categories in the wake of the coronavirus pandemic, including, "Best Music Video From Home," and "Best Quarantine Performance."

DJ Lonnie B organizes music at his Midlothian home. His collaborator Kelli Lemon says Lonnie B “does research like no other to make sure that he can execute it to a level that is unseen.”

South Richmond native DJ Lonnie B puts on the music event Art of Noise, and his 14-year-old daughter, Aliyah Battle, is now deejaying.

Early cancer detection saved DJ Lonnie B’s life and changed his outlook. He regularly broadcasts from Radio One in Henrico.