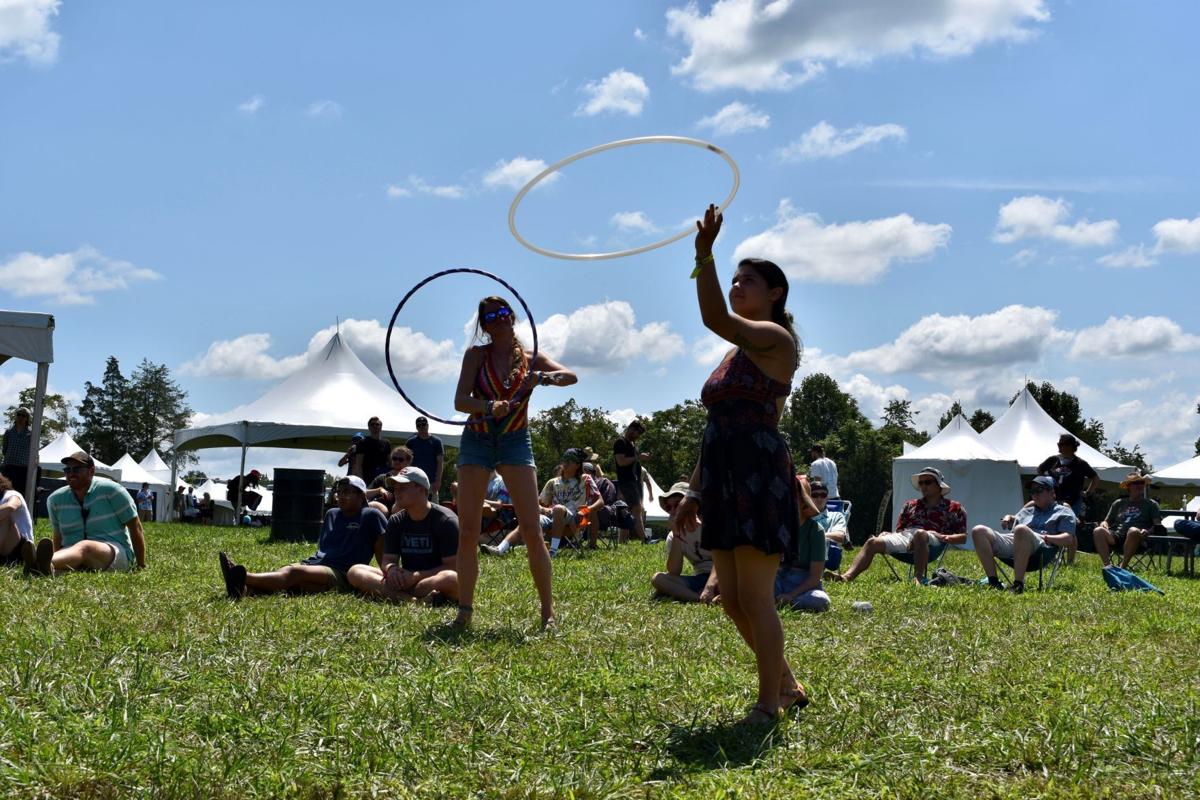 Jenn Lindsay (left) and Lexi Simcic hula-hoop at the 2021 LOCKN’ Festival on Saturday in Arrington. 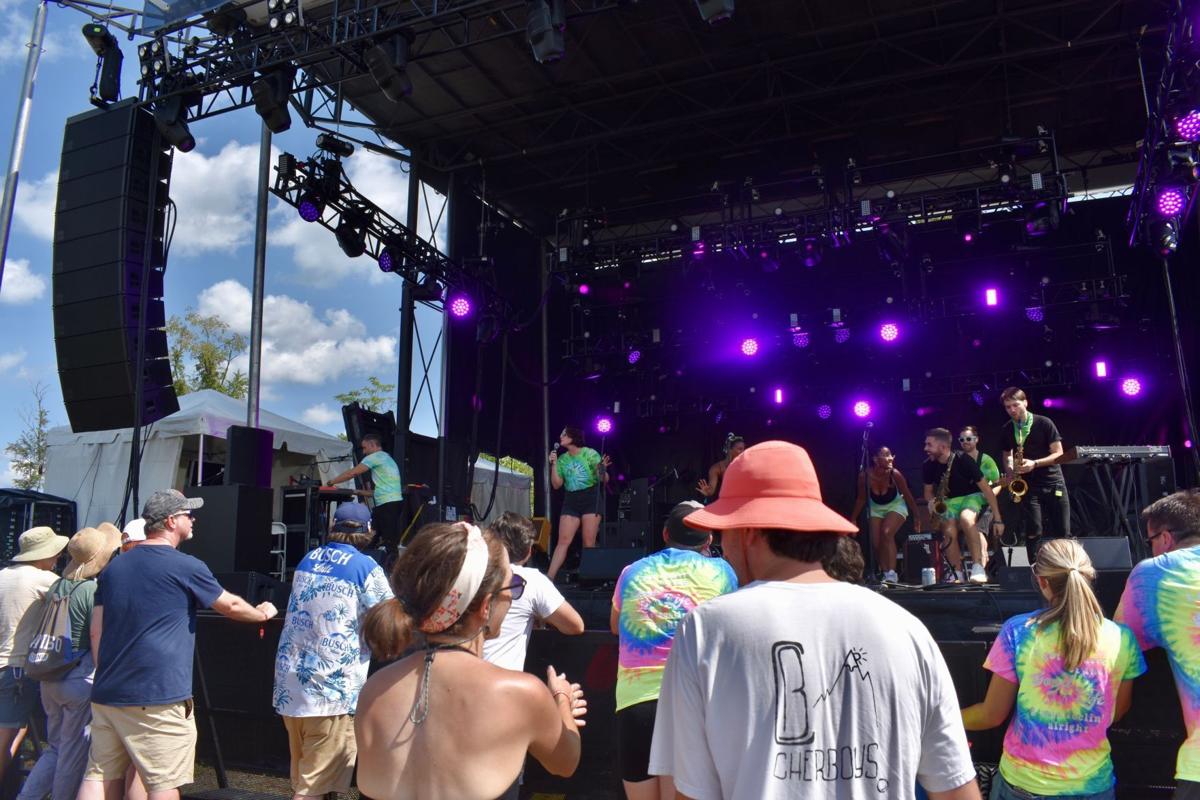 Festivalgoers dance during a performance by Sammy Rae & The Friends at the 2021 LOCKN’ music festival in Nelson County. 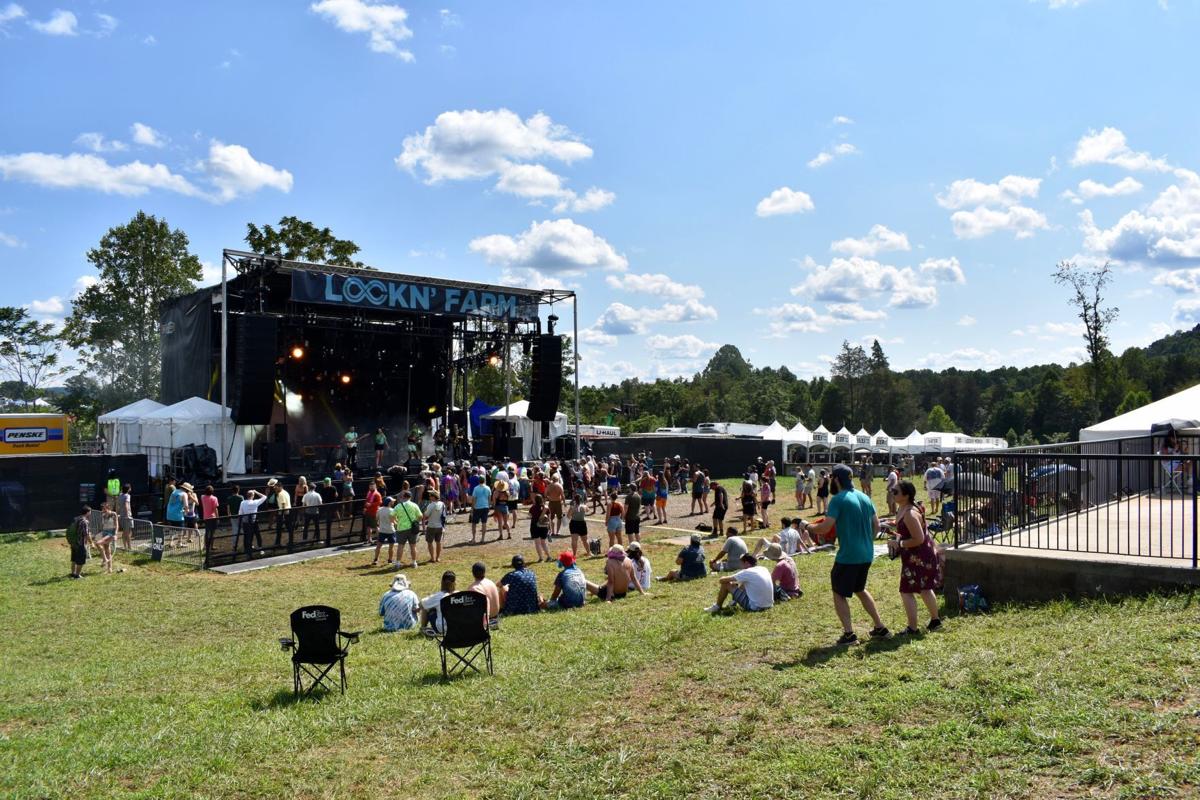 Festivalgoers watch a performance by Sammy Rae & The Friends at LOCKN’ in Nelson County. 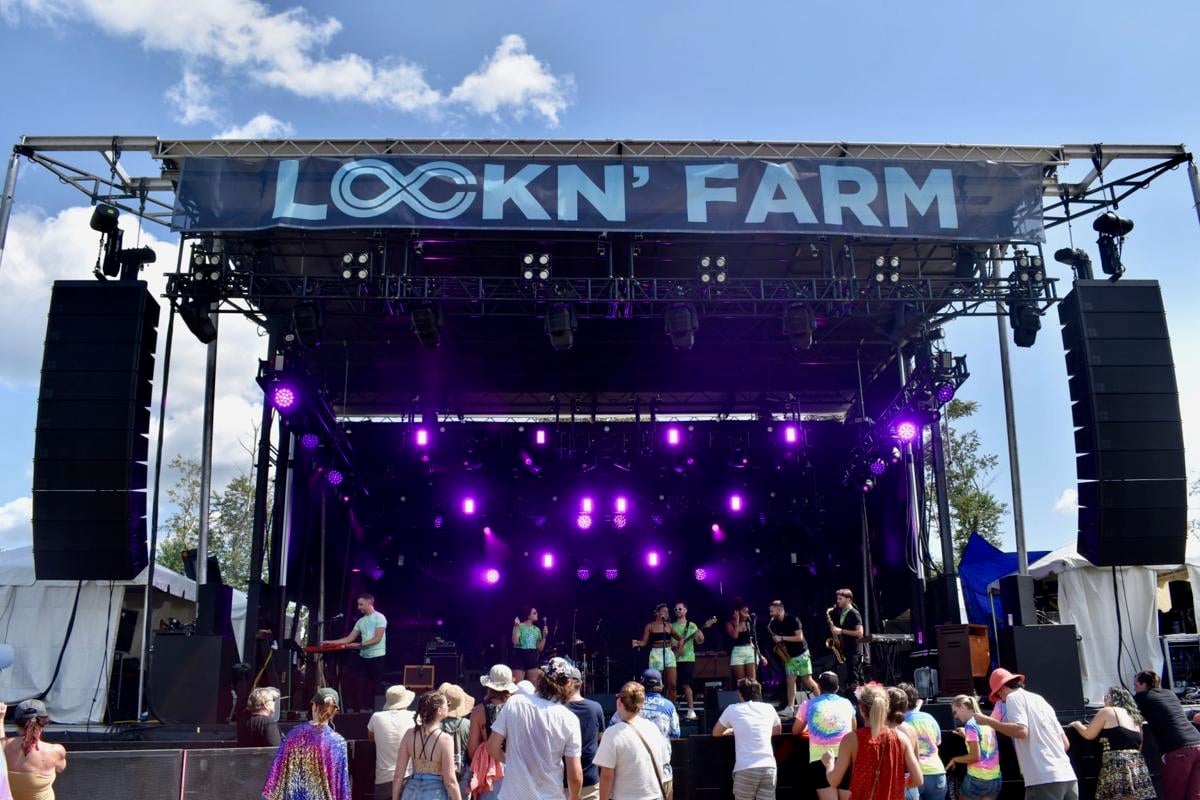 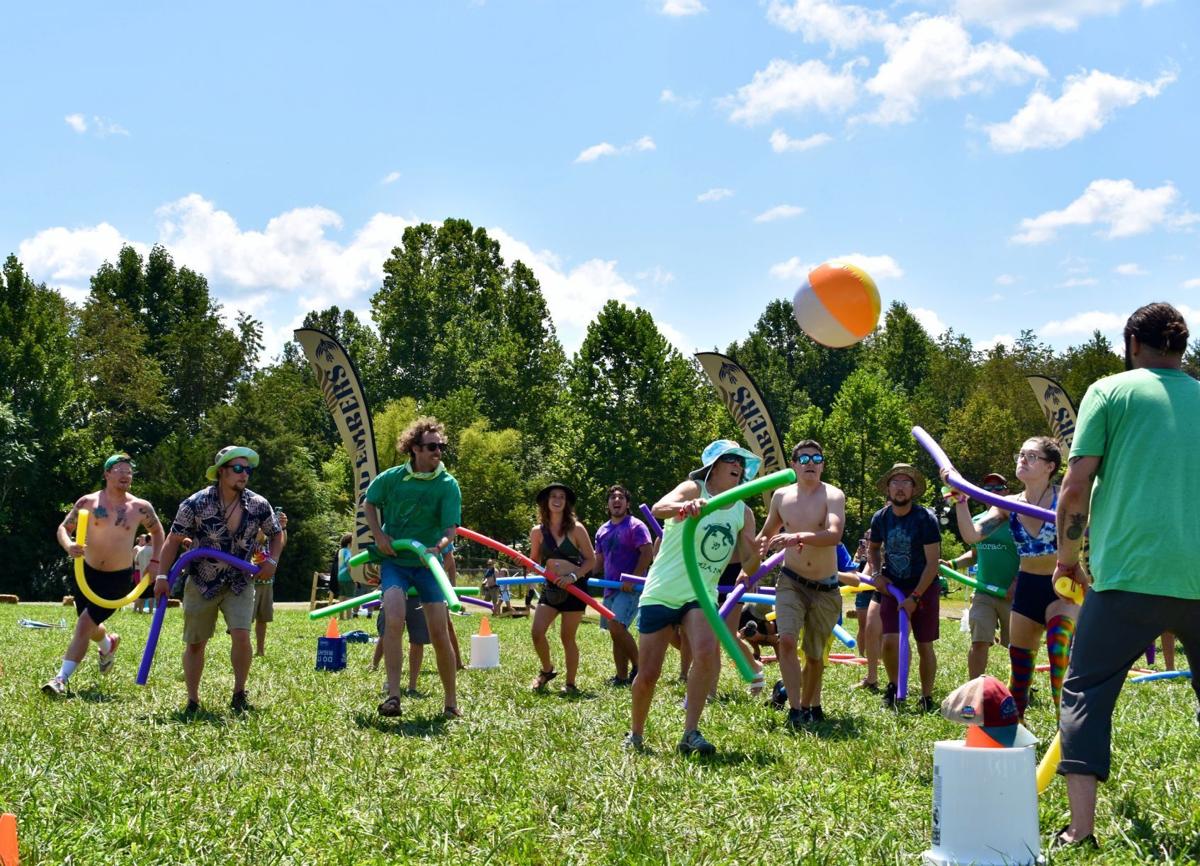 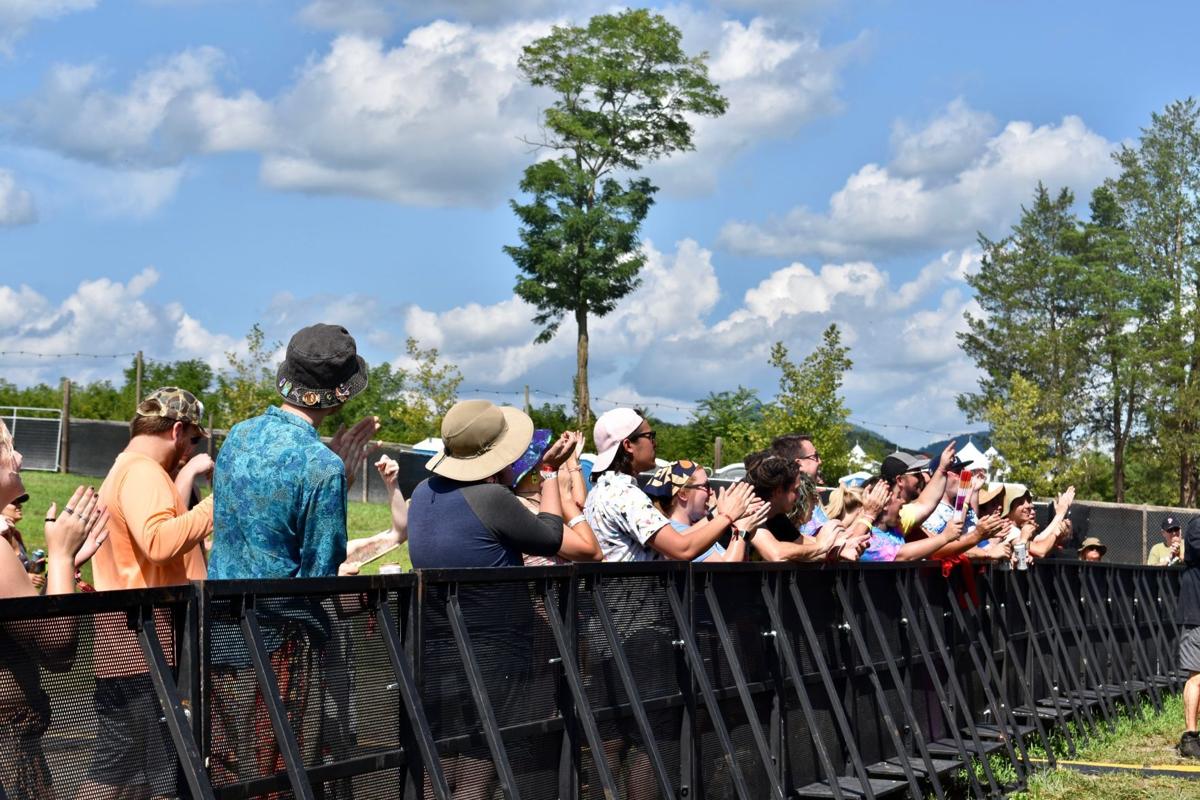 Fans cheer for Sammy Rae & The Friends at the 2021 LOCKN’ music festival in Nelson County. 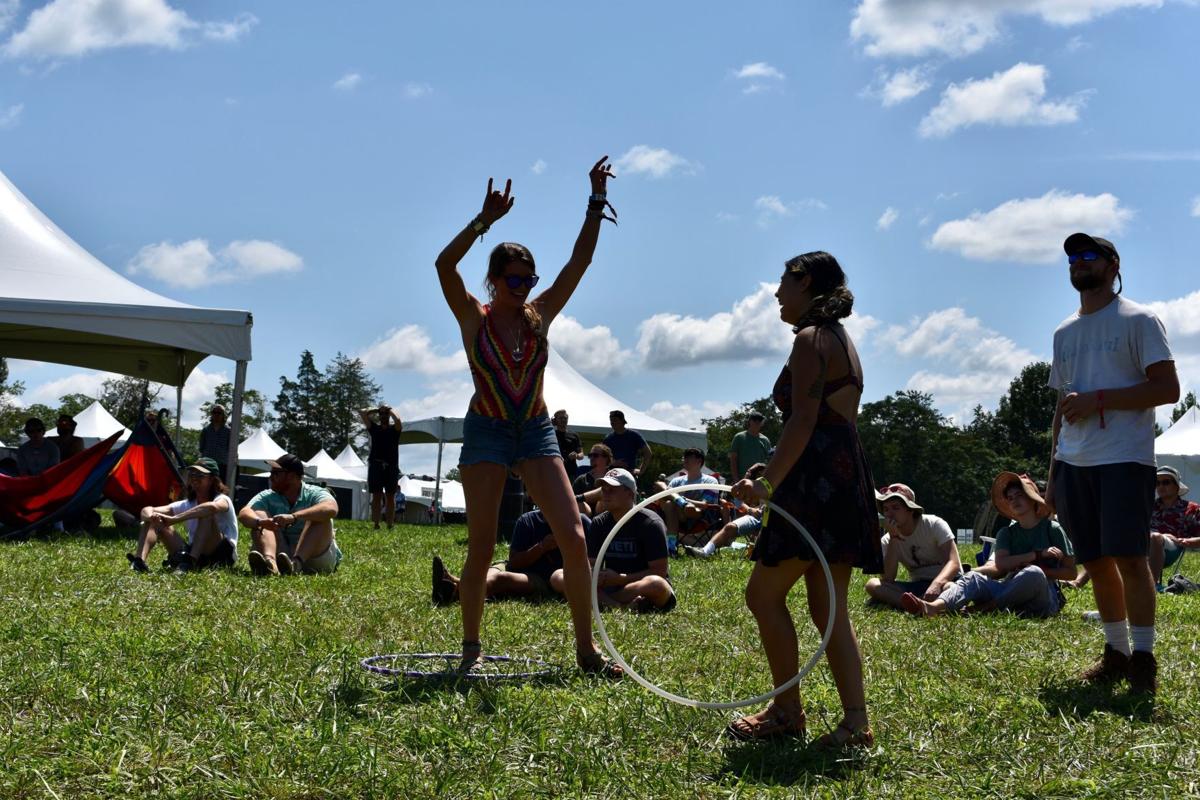 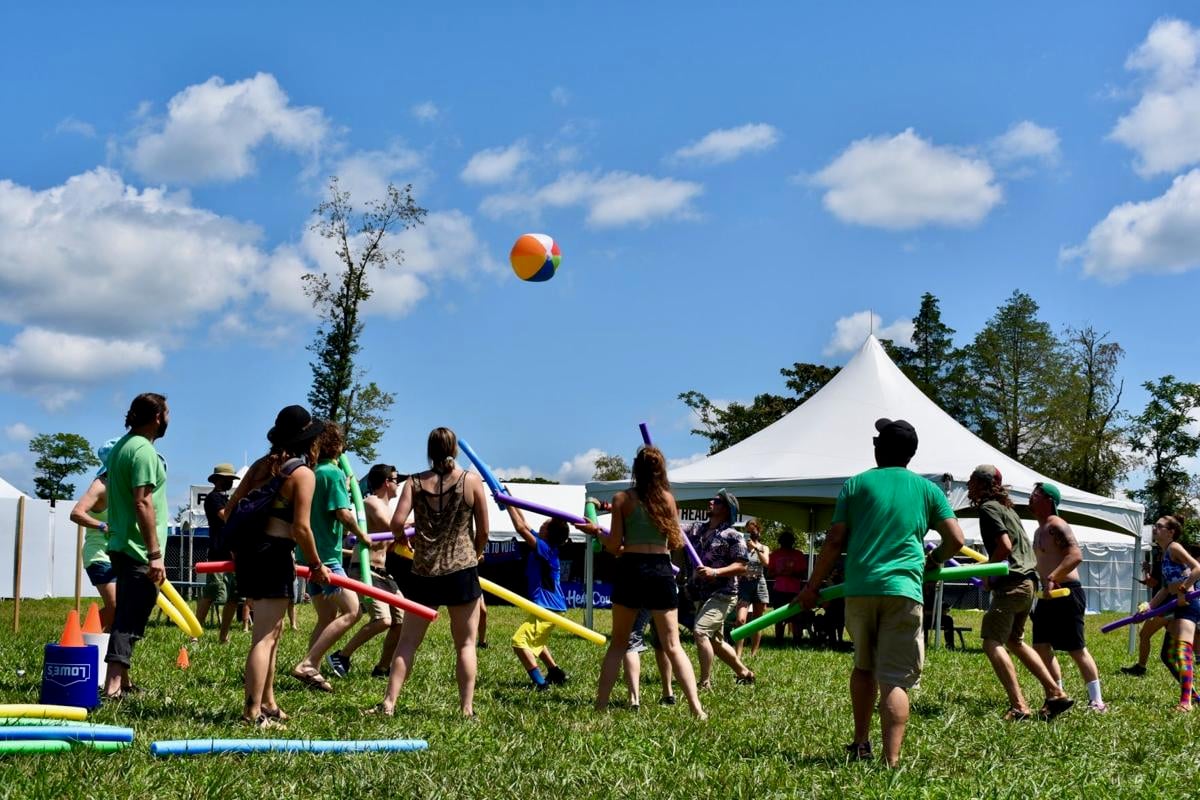 BY JAMEY CROSS The News & Advance

ARRINGTON — Booming bass drums and roaring crowds could be heard over the hills in Arrington as the second of three weekends of the 2021 LOCKN’ Festival was in full swing.

While the Nelson County music festival was substantially smaller this year than it has been in years past, festival director Jon Dindas said it still felt like the same LOCKN’.

“You look around the farm and it feels like LOCKN’, but it’s a little bit different,” he said.

After being canceled in 2020 because of the COVID-19 pandemic, the festival returned to Infinity Downs, a 387-acre property in Arrington often referred to as LOCKN’ Farm, on Aug. 13-15.

The festival began in 2013 and typically is a four-day event, but this year, in order to mitigate the spread of COVID-19, the festival scaled way down — from roughly 20,000 attendees to about 3,000 — and spread out performances over three weekends.

COVID-19 mitigation measures were in place at this year’s festival, with staff required to wear masks, be vaccinated, and undergo COVID-19 testing each week.

Dindas said the first weekend’s rain proved challenging, but the second weekend was met with sunny skies. Scaling down, Dindas said, felt like the right thing to do for both the patrons and the county.

“We just felt that coming to Nelson County and trying to put 20,000 people in this space at one time just didn’t feel right, given what we’re all going through,” he said.

Plus, there was more room to dance.

Dindas said organizers knew a festival like this — if done safely — is just what the music community needed right now.

“I think what you’ve seen this summer with people flocking to events is the real need for that. There’s something that standing in a crowd of music, all singing the same songs, looking at your favorite bands ... you can’t get that anywhere else,” he said.

He added: "We have this honor, this responsibility to help in the way we know how to bring us back to normal a little bit.”

The festival felt more intimate this year, Dindas said, and organizers wanted it to feel like camp.

While there were fewer performances, there was the addition of an “outdoor arcade” — with cornhole, giant Jenga and team sports — as well as swimming in a private swimming hole on the Tye River.

“I grew up at camp and I love the camaraderie and the feeling of it, so if we could do a little bit of that here in addition to having some great, amazing bands, we thought that was a winning combination,” he said.

Dubbed “FRED the Festival,” the second weekend's lineup featured Goose, Dawes, Cory Wong, Dr. Dog, and Sammy Rae & The Friends. The third and final weekend featured Tedeschi Trucks Band. In the group's seventh trip to the farm, the blues-rock ensemble led by Susan Tedeschi and Derek Trucks shared the stage with Jon Batiste and the Marcus King Band, among others.

Dindas said the festival's vendor list also was scaled down this year. In a typical year, about 15 food vendors attend the festival. This year, there were only four.

Lovingston’s heART of Nelson Artisan Collective, which opened a store on Front Street in December, attended the festival for the first time this year.

Randi Brown, a metalsmith with the collective, said the group is made up of 22 artists, including soap-makers, woodworkers, painters, photographers and more.

While she had never before been to the festival, Brown said she always knows when it’s LOCKN’ time in the county, and she appreciates the experience it creates for the area — and tourists it brings.

“As a Nelson County native, I think LOCKN’ is probably one of the best things,” Brown said.

Richmond-based artist Brooke Barlow said she has attended LOCKN’ as a patron and has worked security for the event in the past, so when she was invited to be a vendor, it was a no-brainer.

Barlow runs Mountain Rays Handmade, which she founded in 2017, and showcases U.S.-mined turquoise in her handmade jewelry.

“If you have turquoise or are someone who will shop and wear turquoise, you’re probably also at a place like LOCKN’,” Barlow said. “I felt like it was the right crowd.”

As for next year’s festival, Dindas said he wasn’t sure if the festival would go back to being a large-scale event. This year showed him that smaller could work, and that the festival can evolve and be flexible. Ultimately, it will likely depend on what people are comfortable doing next year.

He has learned to not plan too far in advance.

Return of LOCKN', after a year off and a festival revamp, proves to be a soggy musical treat

With the pandemic rolling into 2021, the Nelson County music festival was restructured as LOCKN’ Farm, with mini-fests held over three weekends, beginning on Friday, Aug. 13, and wrapping up on Sunday, Aug. 29.

Jenn Lindsay (left) and Lexi Simcic hula-hoop at the 2021 LOCKN’ Festival on Saturday in Arrington.

Festivalgoers dance during a performance by Sammy Rae & The Friends at the 2021 LOCKN’ music festival in Nelson County.

Festivalgoers watch a performance by Sammy Rae & The Friends at LOCKN’ in Nelson County.

Fans cheer for Sammy Rae & The Friends at the 2021 LOCKN’ music festival in Nelson County.