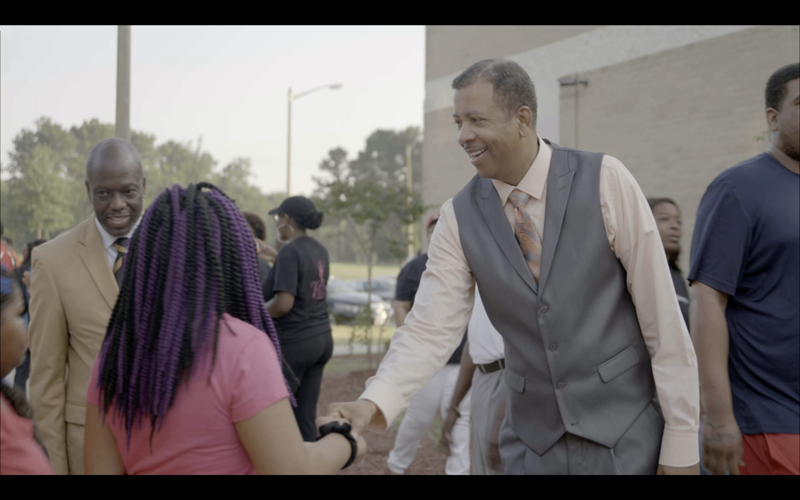 Marcus Newsome appears in “Petersburg Rising,” a film about efforts to overcome a troubled time in the city’s recent history. The film will premiere at the Byrd Theatre on Saturday as part of the Richmond International Film Festival. 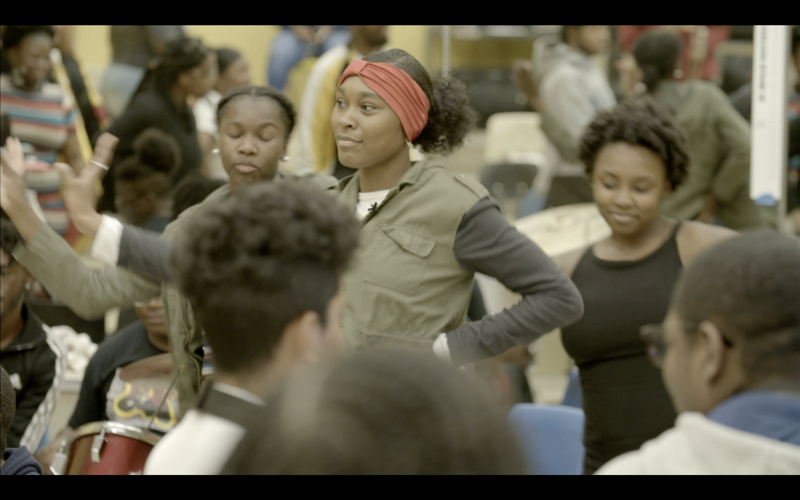 The film, a scene of which is shown here, follows Newsome and three seniors over the course of a year. 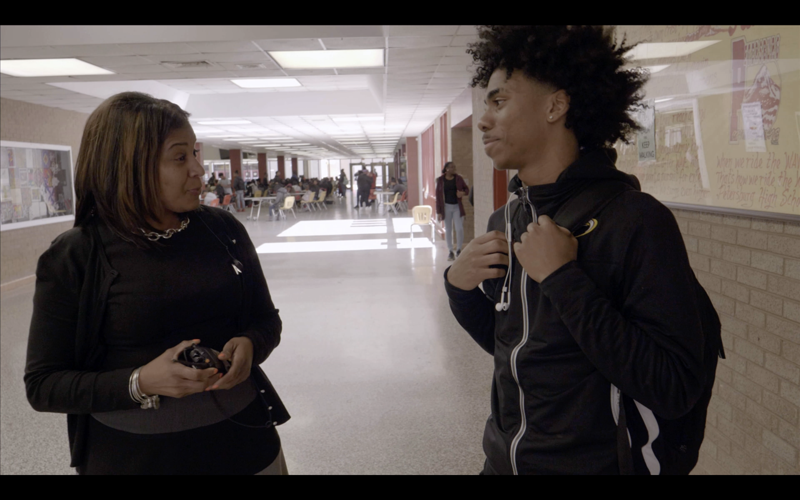 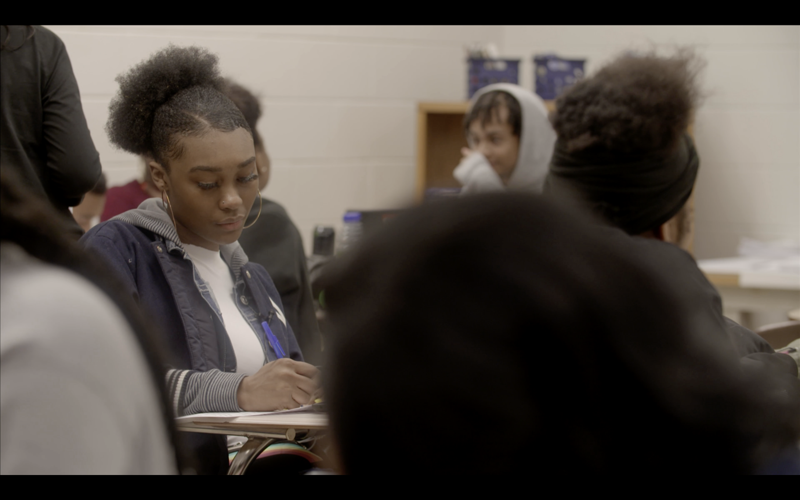 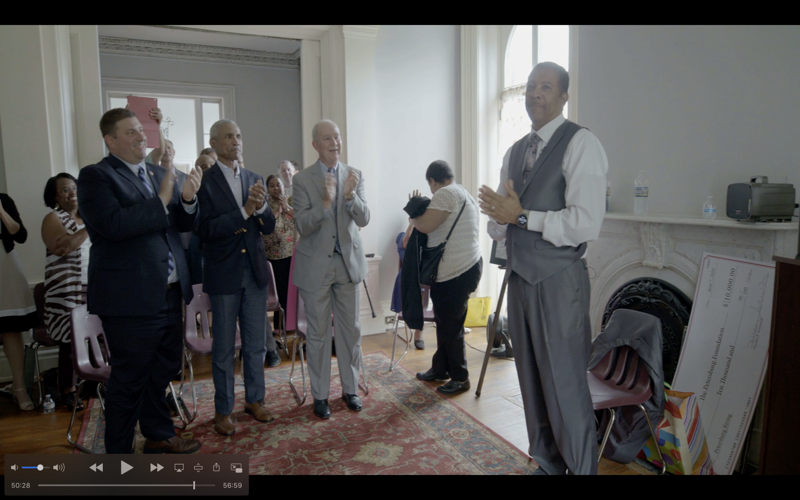 When Marcus Newsome took over Petersburg City Public Schools as superintendent in 2016, the move was equated to “Michael Jordan coming out of retirement” by one School Board member.

He’d just retired from leading the neighboring high-performing Chesterfield public school system for a decade. In Petersburg, the city was millions of dollars in debt. Schools weren’t accredited. The administration was about to default on teacher paychecks.

“I thought the thing that was missing in the city was hope,” Newsome said upon taking the job. “Hope and belief of what students could accomplish there.”

“Petersburg Rising,” a documentary that tells the story of those efforts to overcome a troubled time in Petersburg’s recent history, is slated to premiere at the Byrd Theatre on Saturday as part of the Richmond International Film Festival.

Newsome reached out to his friend Alan Blankstein, an author and educational leader, to help tell the story.

“I just assumed he would write an article. I was a bit surprised when he told me he wanted to do a documentary,” Newsome said.

But that’s exactly what happened. Blankstein teamed up with Emmy Award-winning documentarian Sam Pollard, who’s worked with Spike Lee, and director David Yosha, on the film.

The film follows Newsome and three Petersburg seniors throughout their personal struggles and triumphs over the course of one year, such as Nayson, an aspiring NBA player, and Le’Kayla, a talented dancer who dreams of becoming a nurse but who might not graduate on time.

Blankstein sees “Petersburg Rising” as a universal story about urban schools that are struggling across the country.

“This is much bigger than Petersburg,” Blankstein said. “It’s an American story of cities that were thriving and the challenges [of economic decline] and how that impacted education. It’s about how a group of caring people from the government and businesses galvanized around a community to help raise and uplift the school system.”

In Newsome’s three years as Petersburg’s superintendent, the district gave every student in second through 12th grade a Chromebook computer. Every student was introduced to computer coding. The school system overcame a critical teacher shortage and partnered with Virginia Commonwealth University to establish a teacher residency program, which placed students pursuing master’s degrees in classrooms under the supervision of a mentor teacher — just like a medical residency.

Two schools in Petersburg are now fully accredited; four are accredited with conditions.

“Petersburg Rising” shows that “if we provide these kids with the resources and supports they need, they can succeed and they will,” Blankstein said.

The film also reveals, for the first time, the surprising and personal reason why Newsome left Petersburg after only three years, when he was originally expected to stay longer.

“I think that will be a jaw-dropper for some,” Blankstein said. “But I don’t want to give away any spoilers.”

At Saturday’s red carpet premiere at the Byrd, Newsome will be awarded RIFF’s 2021 Founders Award, which honors those who are spearheading efforts in the community in ways that leave lasting positive impact. Newsome is the first educator and the first honoree with Virginia connections to receive this award, which previously went to Alfre Woodard in 2019 and to Kate Bosworth in 2018.

“I was so moved by his work,” said Heather Waters, RIFF founder. “I was literally brought to tears by this film. You come to know these kids and get a new perspective of their story. This brings the human element to the statistics.”

Last year, RIFF turned to a hybrid model amid the coronavirus, but this year, the festival is back in full, in-person mode with over 150 films over the course of a week.

This weekend, besides “Petersburg Rising,” the festival will screen several films including “The Rumba Kings” at the Byrd, a documentary about the Congolese people getting their freedom with the filmmakers from Morocco in attendance.

On Saturday, the festival will also host a free block party, open to the public, with soul food and drinks, mural art by Hamilton Glass, live music by Don Castor and a special Congolese Rumba set by Hotel X, plus a virtual reality station by the Hidden in Plain Site project. The block party will start at 4 p.m. at Tilt Creative + Production at 1207 N. Arthur Ashe Blvd.

On Sunday, RIFF wraps up with panel discussions on the film industry, film screenings and a tribute to late actor Danny Aiello (“Do the Right Thing,” “The Godfather: II”) with a screening of his last film, “One Moment.”

After a year of people being stuck at home from the pandemic, Waters said the energy level at this year’s festival has been especially high and vibrant, with a much greater turnout than expected. By the end of the festival’s run on Sunday, Waters expects the festival will have seen 8,000 to 10,000 visitors, breaking records for the 10-year-old festival.

The full RIFF schedule can be found at https://riff.eventive.org/schedule. “Petersburg Rising” is also expected to air on VPM sometime this fall.

Groups want to bring 'Ted Lasso' to life in Richmond

No “best of” lists. No social media buzz. Rustika remains all but forgotten among the chattering classes. Which is a shame because what recent visits there have also confirmed: it’s a place worth remembering.

Actress Anne Heche has 'long recovery ahead' after car crash

The vehicle was traveling at a high rate of speed when it ran off the road and collided with a residence, authorities said.

“American Idol” is searching for its next round of contestants, and that search comes to Virginia next week. The reality singing competition i…

New restaurants keep entering the scene like pit beef in the Fan and fried chicken in Short Pump, plus existing restaurants are continuing to …

U.S. President Joe Biden denounced the verdict and sentence as "unacceptable." Get that and more trending news here.

Marcus Newsome appears in “Petersburg Rising,” a film about efforts to overcome a troubled time in the city’s recent history. The film will premiere at the Byrd Theatre on Saturday as part of the Richmond International Film Festival.

The film, a scene of which is shown here, follows Newsome and three seniors over the course of a year.