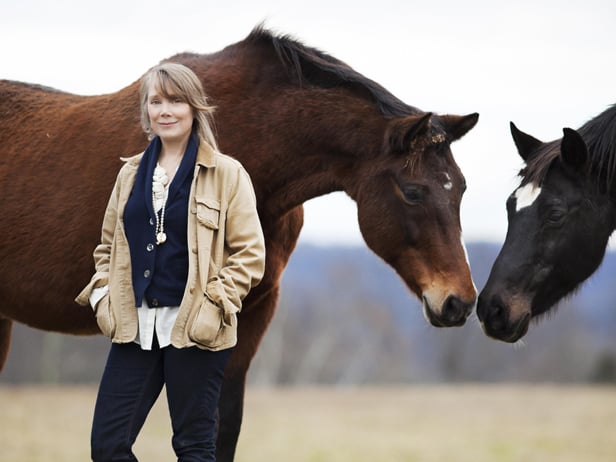 Sissy Spacek, 62, enjoys the beauty of a friend’s farm in the Blue Ridge Mountains. 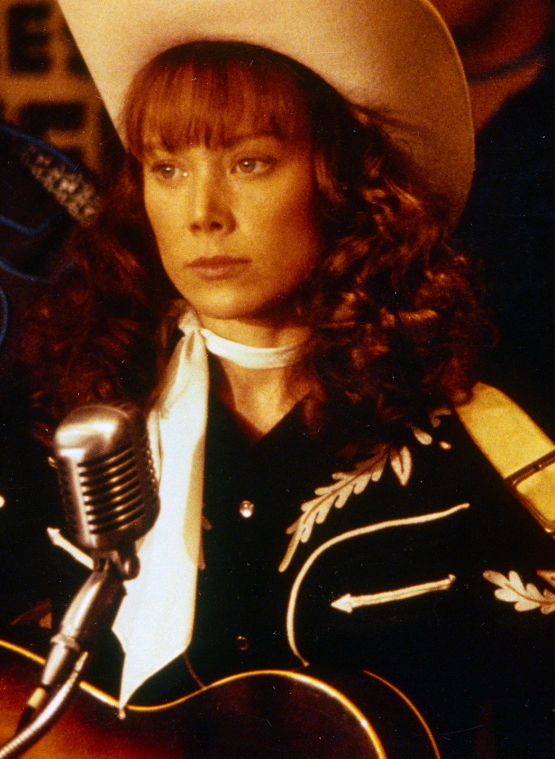 Sissy Spacek wears a long, slender gold chain around her neck from which hangs a cluster of charms: a baby's gold ring belonging to one of her two daughters; an Academy Award in miniature acknowledging the Best Actress Oscar she won for portraying country singer Loretta Lynn in "Coal Miner's Daughter"; and a small, solitary jingle bell, because, she explains, "every little Southern girl has taps on her shoes and bells on her petticoats."

She played a little Southern girl — all grown up and sprung from jail for shooting her husband — in the film version of Beth Henley's comedy "Crimes of the Heart." For that role she earned the fifth of her six Academy Award nominations for best actress.

The charms on Spacek's necklace symbolize just a few of the stories found in her new memoir, "My Extraordinary Ordinary Life," published this month by Hyperion.

At 62, Spacek is as radiant in person as she has always been on the screen. She's dressed simply and comfortably in blue jeans, a dark striped blouse and a gray tailored jacket. Her long strawberry blonde hair is clipped loosely back in her trademark fashion — a low-slung bun with angle-cut bangs framing her aqua green eyes.

She's sitting in a sunlit dining room at Selba, a natural foods restaurant in Richmond, where she's just enjoyed a small salad of organic greens, candied pecans and Virginia apples, with a side of seared halibut. An indoor garden filled with banana and papaya trees, kumquat plants and schefflera forms a lush backdrop.

After intermittent trips to Virginia that grew longer with each visit, Spacek and her husband, film production designer and art director Jack Fisk, left the high-wattage clamor of Los Angeles for good in 1982, staking their claim on a farm near Charlottesville in the rolling green foothills of the Blue Ridge Mountains. They raised their daughters there — singer-songwriter and actress Schuyler Fisk and Virginia Madison Fisk, an artist and art director. They live an ordinary, idyllic life with dogs, horses and other members of the animal kingdom.

Their farm is their sanctuary, and it is hallowed ground upon which no interviews or photography may take place. But Spacek is glad to meet in Richmond, not far from her home. She came to know the capital well when Madison was studying sculpture at Virginia Commonwealth University.

"I love Richmond, love that it's an old city," she says. "I love Monument Avenue and the Fan. I love VCU. There's nothing like a college town; there's so much young energy. All these young people have their own little thing goin' here."

Spacek's middle-class 1950s childhood in Quitman, Texas, was magical and homespun, with loving parents and two older brothers whom she emulated and adored. She was a tomboy who twirled a baton and played guitar. She rode a cow before she was outfitted with a horse. It was a growing up that is "the source of everything" she became. Her parents, she says, taught her "a way to live in the world."

"When I went out to seek my fortune, I was very naïve on many levels," she says. "I hadn't seen a three-story building. I hadn't lived in cities. I wasn't sophisticated. I was like Alice in Wonderland, but because of the really strong emotional grounding my parents gave me — they were very wise — I had what it took to deal with what came at me. I understood what was important and what made me feel good: It's relationships, and friendships, trying to make the world better. All those corny things. "

Spacek crossed the first bridge to the "extraordinary" side of her life the summer before her senior year in high school. It was during a trip to New York City to visit her cousin, actor Rip Torn, and his wife, legendary actress Geraldine Page. She absorbed the theater world, watching Page's eight performances a week in a play and exploring the nooks and crannies of the theater. The two formed a cherished bond.

"She wasn't the type of person to really give advice, which I always appreciated." says Spacek. "The thing that she did for me was let me into her world, and she listened to me. I'm sure I was just expounding on everything — but she was patient and we became very close. I would go to the theater with her every day and she treated me like an artist. It was just wonderful. She would listen to me play my music when she was getting ready in her dressing room. She loved my music, and that was the gift she gave me — just letting me into her world."

Spacek pauses a moment. "What I could ask her now…"

How many actors walk away from the center of the film universe and manage, as expatriates, to maintain brilliant careers? Spacek has done it, garnering five of her best actress nominations after moving to Virginia. Her theory of acting is simple, she writes in the book: "To be an actor, you have to live a life."

"The parts in films that interested me were never the glamorous characters, but ordinary people."

During a 40-year career, with more than 60 roles to her credit, a host of prestigious awards and honors (including a Grammy nomination for the

"Coal Miner's Daughter" soundtrack, for which she did her own singing with Loretta Lynn's blessing) and, last year, a star on Hollywood Boulevard, Spacek is one of the most respected and revered actors of her generation. Her enduring qualities on film are bred-in-the-bone honesty and integrity. If any American actor — male or female — evinces a pioneering spirit, it is Sissy Spacek.

In many of her roles, most notably her star turn in "Coal Miner's Daughter," Mae Garvey in "The River" and "Raggedy Man's" Nita Longley, she conveys an arresting combination of grit and incandescence and a strength forged from the often hardscrabble lives of her characters. Although that strength is sometimes veined with vulnerability, it is a vulnerability that elicits compassion and empathy rather than pity. There's intelligence, an instinctive sure-footedness and an utter lack of pretension to her acting.

You see this even in her earliest films. Before watching "Carrie," the film by Brian DePalma that changed her career, take a look at "Badlands," written and directed by Terrence Malick, which preceded it.

If "Carrie" changed her career, "Badlands" changed her life. It's where she met and fell in love with Fisk, Malick's art director. Asked how long she and Fisk have been married, she communicates by email, "NOT LONG ENOUGH." The couple has been together for 38 years.

So I have to ask her: What's the secret to such a long, happy marriage?

Professionally, "Badlands" had a profound effect. " 'Badlands' put my career on a different course," she says. "I was on a different path after that because that's when I saw filmmaking as art. I wanted to try to recreate that experience … if possible, or get as close to something like it, something meaningful."

And then came "Carrie."

After "working in anonymity" for a couple of years, the blockbuster high-school fright film based on Stephen King's novel earned Spacek her first Oscar nomination, an impressive achievement since the Academy rarely honors the horror genre. "Carrie" ranks 46th in the American Film Institute's Top 100 list of the most thrilling American movies.

"It was as if the whole world turned around and went, 'Oh! You're there. Well, hello.' And that's rather disconcerting because suddenly you're in the hot seat thinking, 'Oh my God, how am I ever going to do that again?' "

Spacek was 26 years old when she played the telekinetically gifted, misbegotten prom queen; Carrie was supposed to be around 16 in the film. But on screen and in life, Spacek has always appeared young. At 29, she portrayed Loretta Lynn from the age of 14 through her 40s.

Although Spacek is still acting, would she one day like to direct?

She won't say more "'cause that's bad luck." But she does add: "Directing should be natural for me, 'cause I love to tell people what to do."

One film that holds special meaning for Spacek is "Raggedy Man." Her husband directed her performance of Nita Longley, a World War II-era telephone operator, divorced and living with her two small children in the Texas backcountry. Spacek invested her character with some of her mother's qualities and mannerisms. The nuanced performance earned her a Golden Globe nomination for Best Actress. It also touched a chord in Meryl Streep.

"She wrote me the dearest letter after she saw 'Raggedy Man,' " she says. "It was a full page on notebook paper — you could tell she just saw the movie and sat down to write — a word was crossed out here and there. In one scene, my character was hanging out clothes wearing high heels, and then runs over to fly a kite with her children and a friend. I'm running across the yard in these high heels — you run differently in high heels — and she said it took her back to another time and reminded her so much of her mother. (That letter) was wonderful; so beautiful and heartfelt. It was just a treasure."

It is the thrill of a lifetime to hear Dustin Hoffman call your name as winner of the Best Actress Oscar; for Spacek, it is just as thrilling — certainly more precious — to hear this over the loudspeaker in the local drugstore: "Will the mother of Schuyler Fisk please come to the pharmacy counter?"

"I really feel very lucky," she says. "My parents always said we're a product of our choices, and that's so true. What I've learned is that I've had a really wonderful life."

Esquire magazine has put its annual best new restaurants in America report and Restaurant Adarra in Jackson Ward made the list.

“Dopesick,” an eight-episode limited series for Hulu based on Beth Macy’s best-selling book, will start filming in Richmond in December and co…

“Dopesick,” an eight-episode limited series for Hulu based on Beth Macy’s best-selling book, will start filming in Richmond in December and co…

The pandemic has turned many holiday traditions on their head, and Thanksgiving is no different.

Thanksgiving is just around the corner and if prepping a feast isn’t in the cards this year, there’s always the next best thing: someone else …

The Children's Museum of Richmond has released a final round of tickets to see Legendary Santa.

On the Record: What is Freddie Mercury singing in 'Killer Queen'?

Q: My favorite Queen song is “Killer Queen,” but I’ve never been able to understand the first line of the song. What does she keep in her pretty cabinet?

Sissy Spacek, 62, enjoys the beauty of a friend’s farm in the Blue Ridge Mountains.