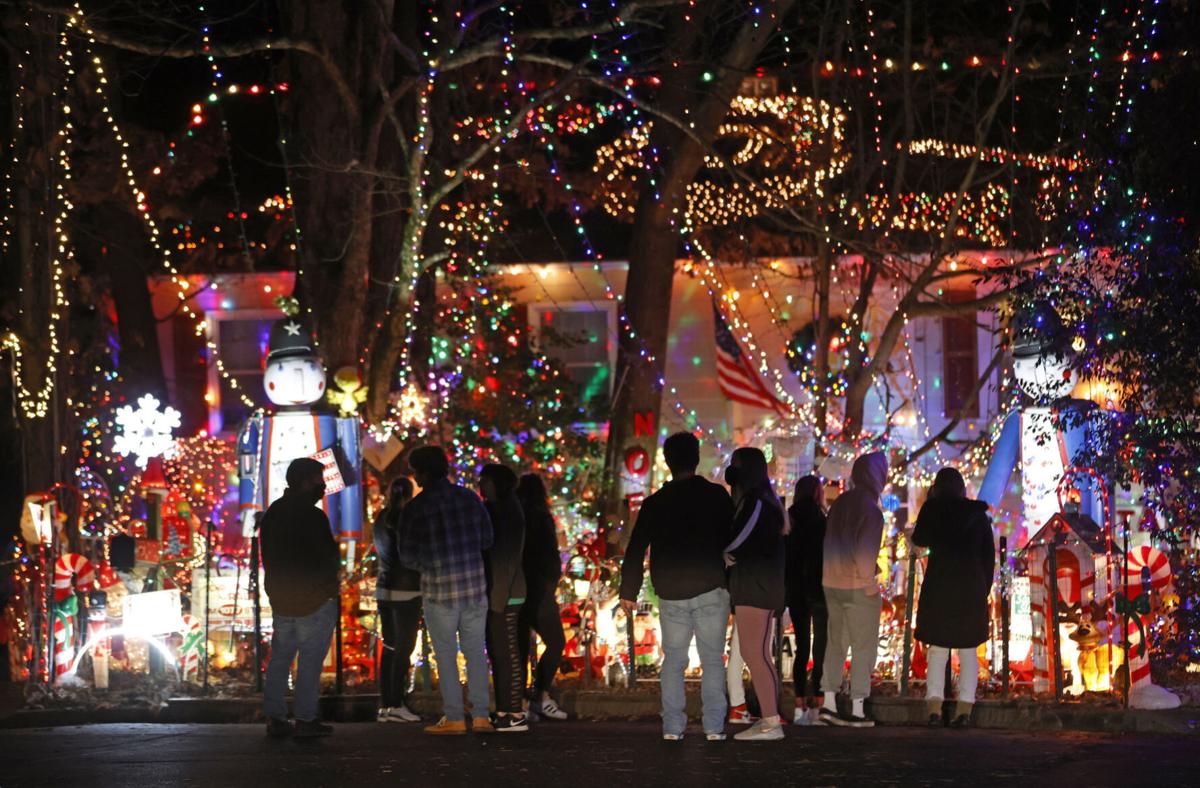 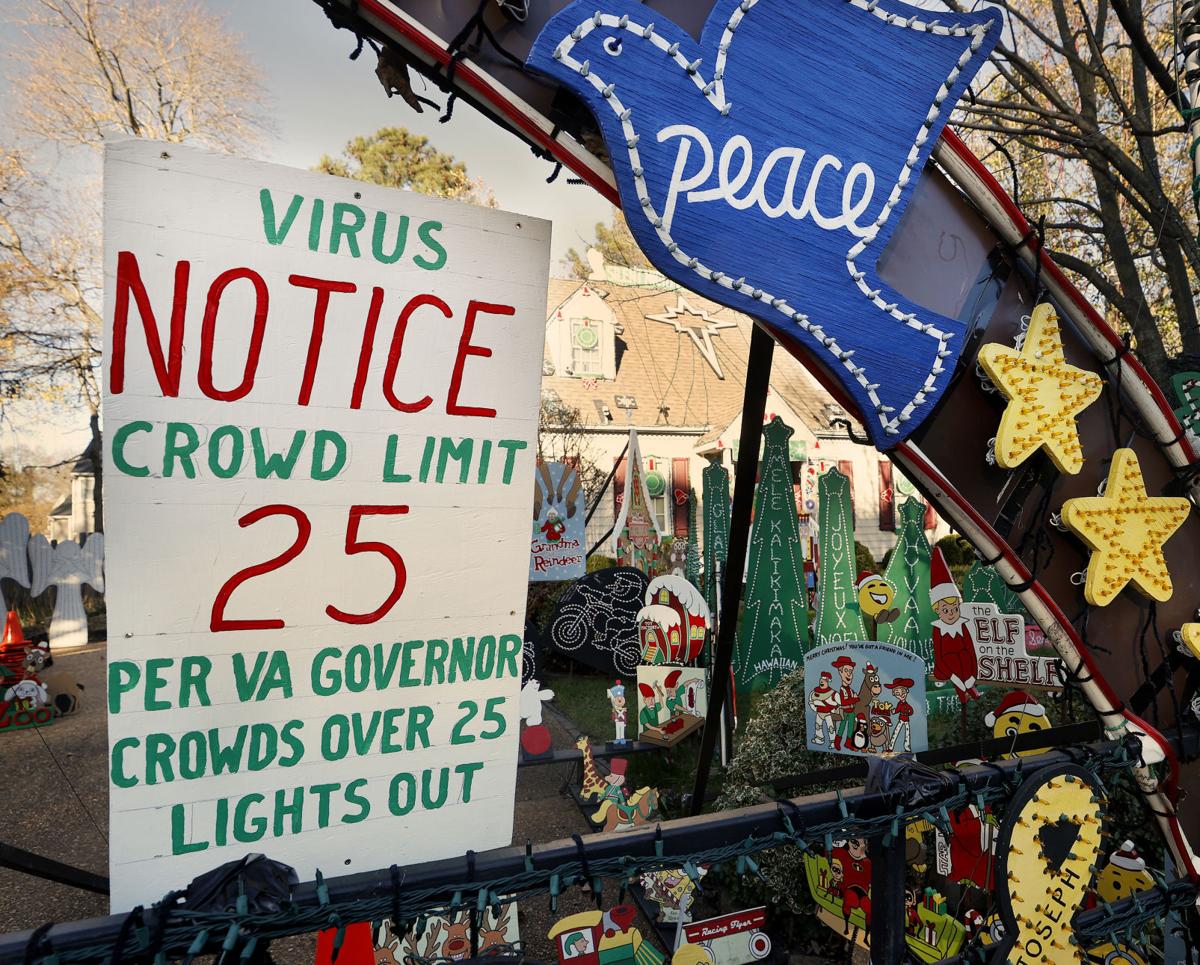 Al Thompson has posted a sign at his “tacky light” house at 9716 Wendhurst Drive in Glen Allen, saying visitors are limited to 25 people at one time, as per the governor’s mandate. Photo was taken on Friday, November 20, 2020. 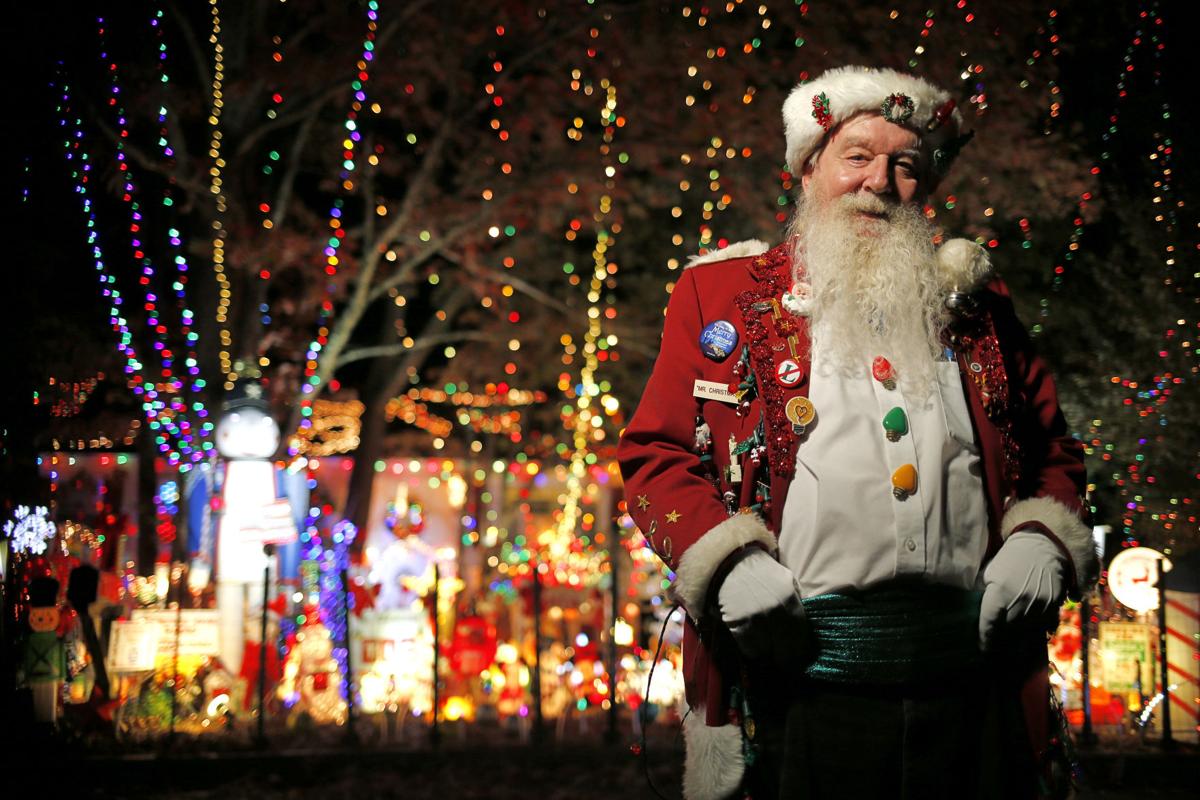 Frank Hudak, as Mr. Christmas, in front of his home on Wistar Court in 2019. 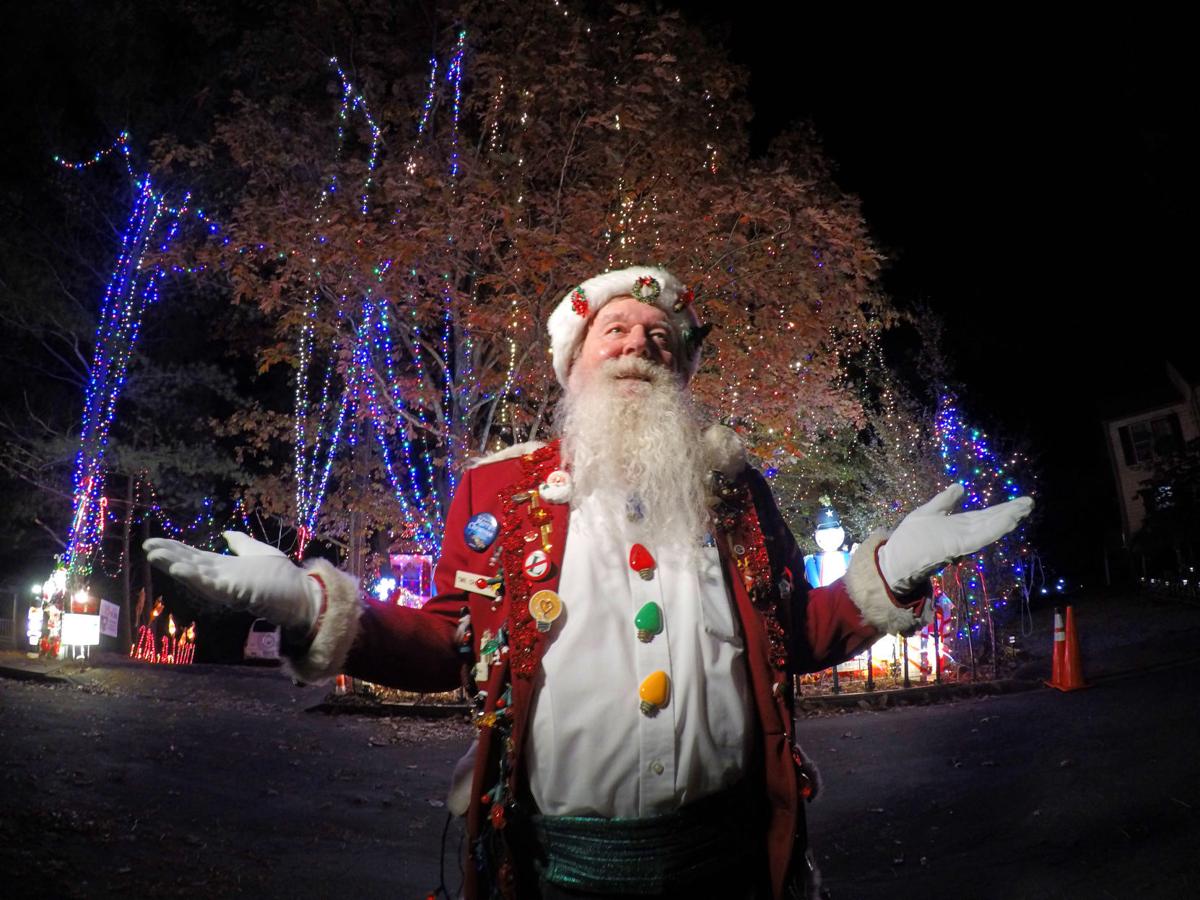 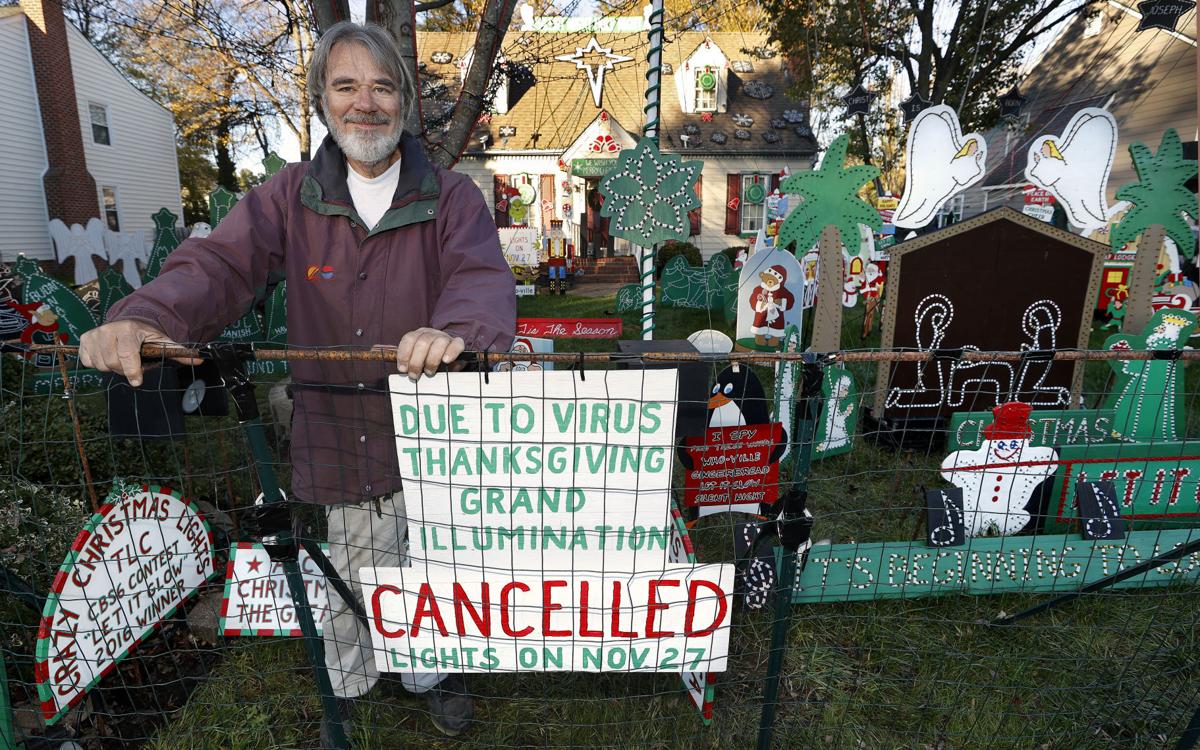 Al Thompson canceled his holiday-lights kickoff, but will light up his home at 9716 Wendhurst Drive in Henrico County on Friday. 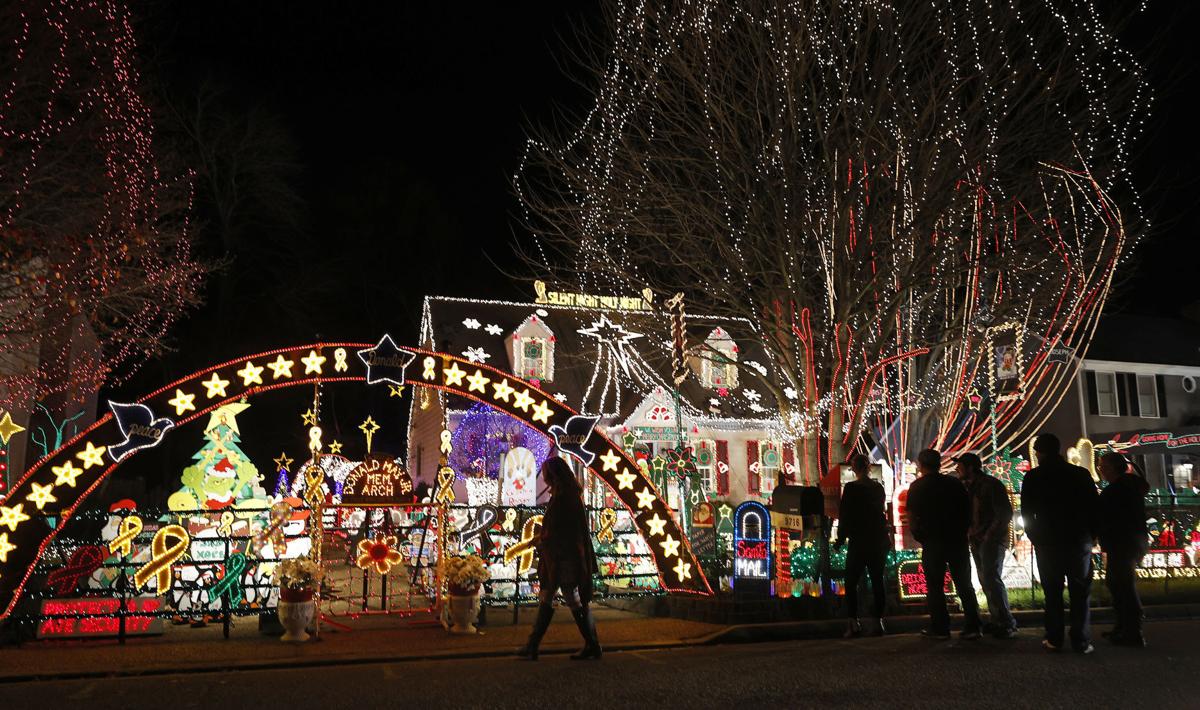 Visitors gazed at the lights at 9716 Wendhurst Drive on Thursday. 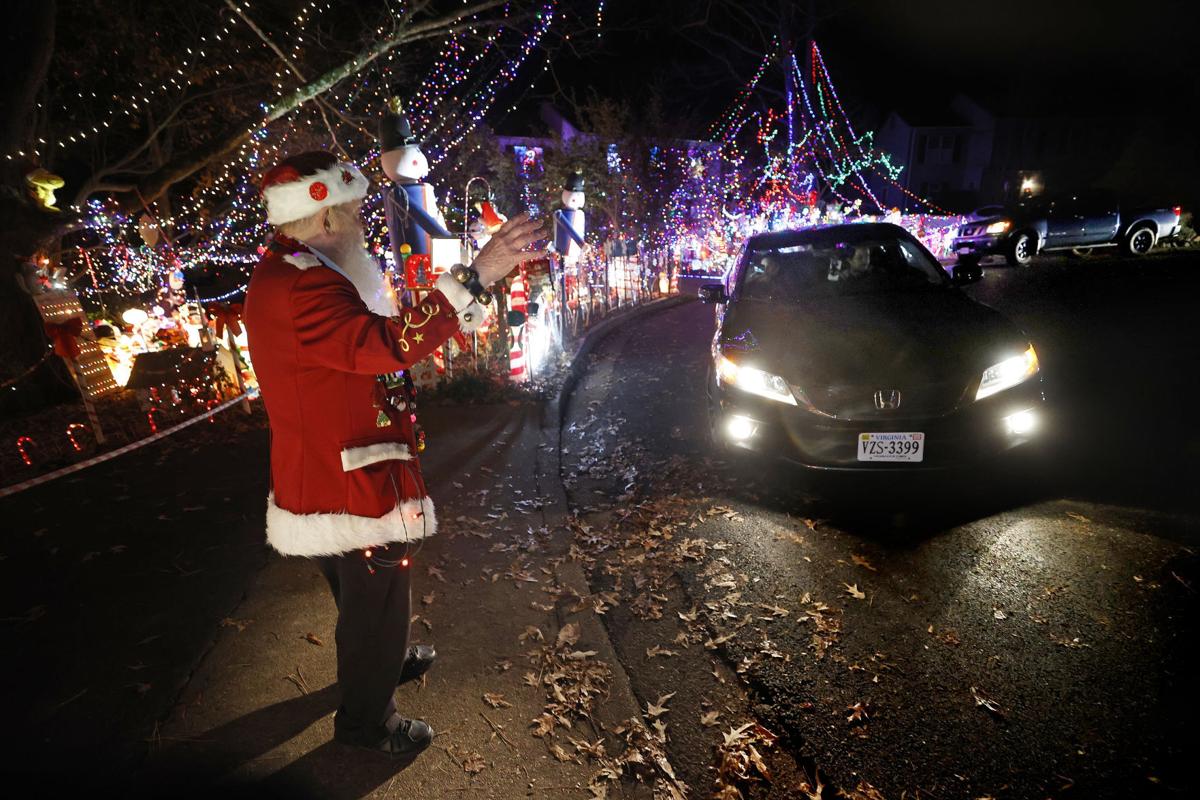 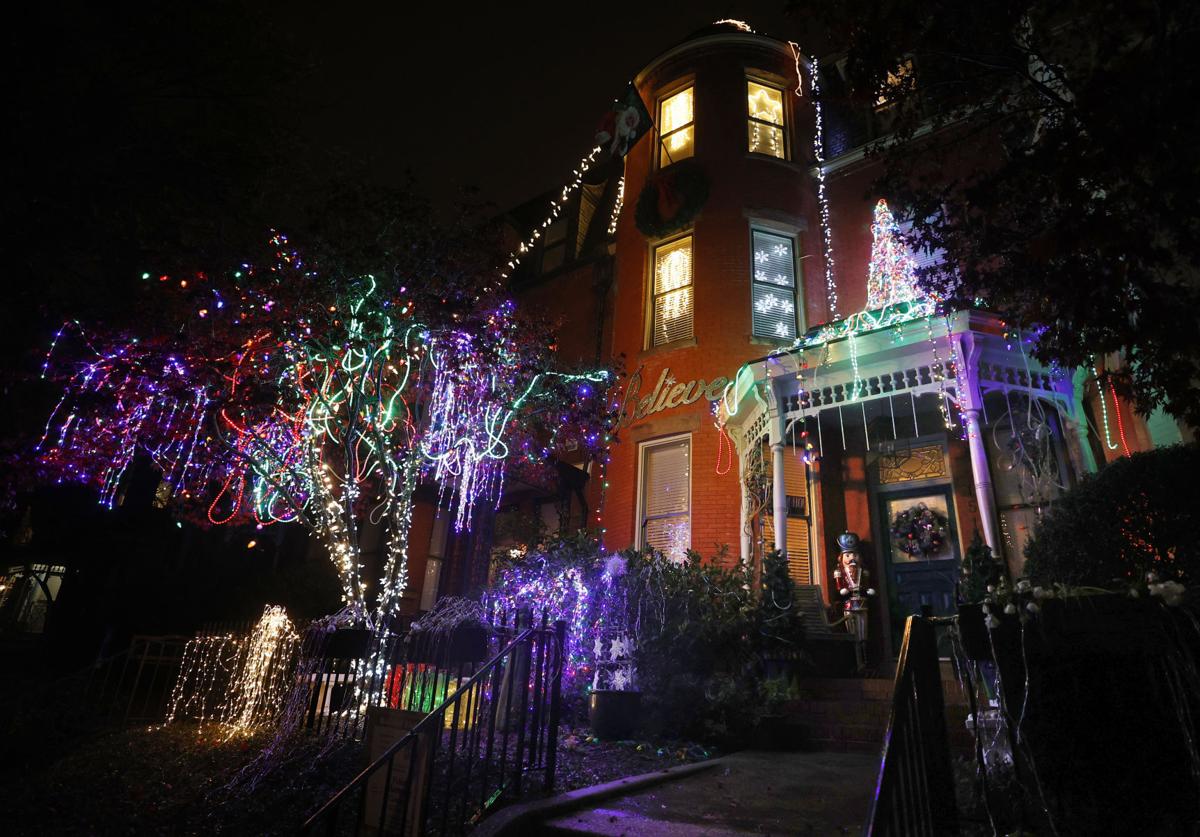 A sign on the house at 1510 Grove Ave., which is on the RTD Tacky Lights Tour, urges visitors to “believe.”

During a holiday pandemic when most traditional events are canceled, Tacky Lights, the popular Richmond tradition where local homes get decked out with over-the-top decorations, seems like a safe choice. It’s outdoors. It’s free (if you do it yourself). And most homes can be viewed safely from one’s car.

But neighbors of a few Tacky Lights homes in Henrico County said they’re worried about the crowds and are concerned about their own safety and possible exposure to the coronavirus.

“People are getting out and walking down Wistar Court to look at the lights,” said Callie Stuart, a neighbor of popular tacky light houses 2300 and 2302 Wistar Court. “A majority of these people are not wearing masks.”

The RTD Tacky Lights page is your guide to over-the-top holiday light displays in Richmond, Virginia. Brought to you by the Richmond Times-Dis…

Earlier this month, Gov. Ralph Northam updated Virginia’s COVID-19 restrictions by mandating that all public and private in-person social gatherings be limited to 10 people. Masks are now also required outdoors when coming within 6 feet of other people. And indoors, even in private residences, all Virginians ages 5 and over are required to wear masks if coming within 6 feet of someone not in their household.

Many small buses, trolleys and large limousines have been visiting Wistar Court and the nearby Thousand Oaks neighborhood nightly to look at the lights, resulting in traffic back-ups on Skipwith Road and Forest Avenue.

Because Wistar Court is located on a cul-de-sac, tour operators often park at the top of the cul-de-sac and allow their riders to walk down to the houses at 2300 and 2302 Wistar Court.

Frank Hudak, owner of 2300 Wistar Court, said this year’s tacky light season has been a good one. He said 75% of his traffic is people driving by in cars, and the other 25% is foot traffic.

He also said he believes overall tacky light traffic is up 25% this year.

“There will always be somebody who’s going to complain. You can’t please everyone all the time,” Hudak said. “But if the predominance of people love it and enjoy it, then that’s what we should focus on.”

Hudak himself does not wear a mask when standing outside his residence in his illuminated Mr. Christmas suit.

Stuart, Hudak’s neighbor, is concerned about several residents on Wistar Court who are age 65 and older. During peak tour hours, Stuart is worried that emergency vehicles won’t be able to access her neighbors’ homes should one of them need help.

“Now during COVID-19, we have crowds of people walking down our street and most without masks,” Stuart said. On a busy night, she said there could be 25 to 40 people in the street at one time.

Hudak said he’s only seen crowds of families or small groups, no larger than eight at a time, in front of his home.

Henrico police have been keeping an eye on traffic in the neighborhood. But the police “cannot mandate homeowners to turn off their lights due to traffic or other issues concerning crowd sizes related to the newest executive order,” said Lt. Matthew Pecka, public information officer for Henrico police. “The police division and other county agencies are working together with signage to seek voluntary compliance with our newest restrictions.”

Thompson put up multiple signs at his home, saying that crowds must be limited to 10 people at a time. If the crowd goes over the limit, he said he’ll shut off the lights, though he said he hasn’t had to yet. He also put out markers for groups to stand at least 6 feet apart in front of his home. He has contacted the limo and bus companies, asking them not to unload at his house and, as in years past, he hired two off-duty police officers to help handle crowds on Friday and Saturday nights.

He said the new precautions are going well and that foot traffic at his house is down 60% to 70%.

“Last Saturday night, traffic was backed up as far as you could see, but there was not a single person in front of the house. That’s never happened to us before,” Thompson said.

Many limousine companies that offer Tacky Light tours said they’ve been keeping their tours smaller this year due to the pandemic. LOVE Limousine isn’t offering any tours over 10 people. James Limousine is not booking any new tours over 10 people, but it does have some existing tours at 15 people who will ride in a 26-passenger vehicle.

“It’s a gray area for us right now,” said Hope Newcomb, CEO of James Limousine. “We haven’t booked any of our larger vehicles this year.”

From the beginning of state-mandated business restrictions, tour operators said it’s unclear which, if any, apply to them. Most companies that offer tacky light tours said they’ve been running tours at 50% capacity, which translates into about 23 people on a bus or 10 in a limo.

“The governor’s announcements have been a moving target from day one. They’re always unclear and poorly communicated. We’ve never received any direction as a transportation company,” said Mark Pounders, CEO of Winn Transportation. “When we started calling on this, we could never get a solid answer. No one knew what category we fell under. There’s been no clear direction for our industry. We’ve just been winging it.”

But this week, the Virginia Department of Health offered clarification to the Richmond Times-Dispatch, saying these tours have fallen under the “entertainment and public amusement” category.

“According to the VDH Community Mitigation team, although not explicitly listed, we have considered them to be Public Amusement in the Phase Three guidelines,” said Tammie Smith, a spokeswoman for the state Department of Health.

That means, since the most recent restrictions went into effect Dec. 14, as private bookings, these tours have been limited to no more than 10 people. Prior to that, from Nov. 15 through Dec. 13, the tours could have 25 and before that 30% of their capacity up to 250 people.

“Certainly people would be required to wear masks and keep distance from people who are not in their households,” Smith said.

At Winn Transportation, the bus line that started the very first tacky light tour in 1985, the buses have been running at half capacity for social distancing. For most of the season, a 56-seat bus was booked at only 23 seats. Winn also is not selling individual seats for tacky light tours this year. Instead, it is only booking vehicles for private groups.

Business at Winn is down 90%, according to Pounders. “It’s been devastating for our industry,” he said. “I heard that 30% of motor carriers may go out of business.”

John Oulton with Richmond Limousine said it’s been a slow start to the Tacky Light Tour season, which is normally booked solid from Thanksgiving until Christmas Eve. Now that it’s closer to Christmas, business has picked up. He also said Richmond Limousine, and many other providers, have added more houses to their tours, since they are discouraging people from getting out of their cars to look at the lights.

On most tours, drivers wear masks at all times, and vehicles are disinfected with a hospital grade disinfectant in between tours.

At James Limousine, like many others, tour-goers are encouraged to bring masks and wear them if they leave the vehicle, but Newcomb said, as a private tour, “We’re leaving it up to their discretion. We’re not going to force someone to do it.”

At 2300 Wistar Court, she said their limo drivers don’t recommend riders leave the vehicle to see the house on foot, but it is up to the individual as a paying customer.

She also said their drivers have reported the worst tacky lights traffic they’ve seen in years, particularly in the West End.

Other tacky light traffic hotspots are 8720 River Road and 12618 Dawnridge Court in Midlothian on the weekends, according to Glenn Stafford with LOVE Limousine.

The Killers have canceled their Richmond concert that was scheduled to take place Saturday at Virginia Credit Union Live!

Last year, Pam Rosaire, owner of the racing pigs who compete at the State Fair of Virginia, watched her business grind to a halt as the pandem…

Get ready for funnel cakes and the Ferris wheel as the State Fair of Virginia returns for 10 days of fun. You can also check out a dinosaur dr…

Friends and family of the Fort Chiswell Animal Park are mourning the death of one of the zoo’s most popular animals. Cheeto the Giraffe died Wednesday.

New 'Ansel Adams: Compositions in Nature' exhibit at VMFA explores 'the greatest photographer of our time'

You know an Ansel Adams photograph when you see it.

Here's a list of winners from Sunday night's Emmy Awards, plus a gallery of photos of stars on the red carpet before the show.

KIGALI, Rwanda (AP) — The man who inspired the film “Hotel Rwanda” for saving hundreds of his countrymen from genocide was convicted of terrorism offenses Monday and sentenced to 25 years at a trial that human rights watchdogs and other critics of Rwanda's repressive government have described as an act of retaliation.

Al Thompson has posted a sign at his “tacky light” house at 9716 Wendhurst Drive in Glen Allen, saying visitors are limited to 25 people at one time, as per the governor’s mandate. Photo was taken on Friday, November 20, 2020.

Frank Hudak, as Mr. Christmas, in front of his home on Wistar Court in 2019.

Al Thompson canceled his holiday-lights kickoff, but will light up his home at 9716 Wendhurst Drive in Henrico County on Friday.

Visitors gazed at the lights at 9716 Wendhurst Drive on Thursday.

A sign on the house at 1510 Grove Ave., which is on the RTD Tacky Lights Tour, urges visitors to “believe.”