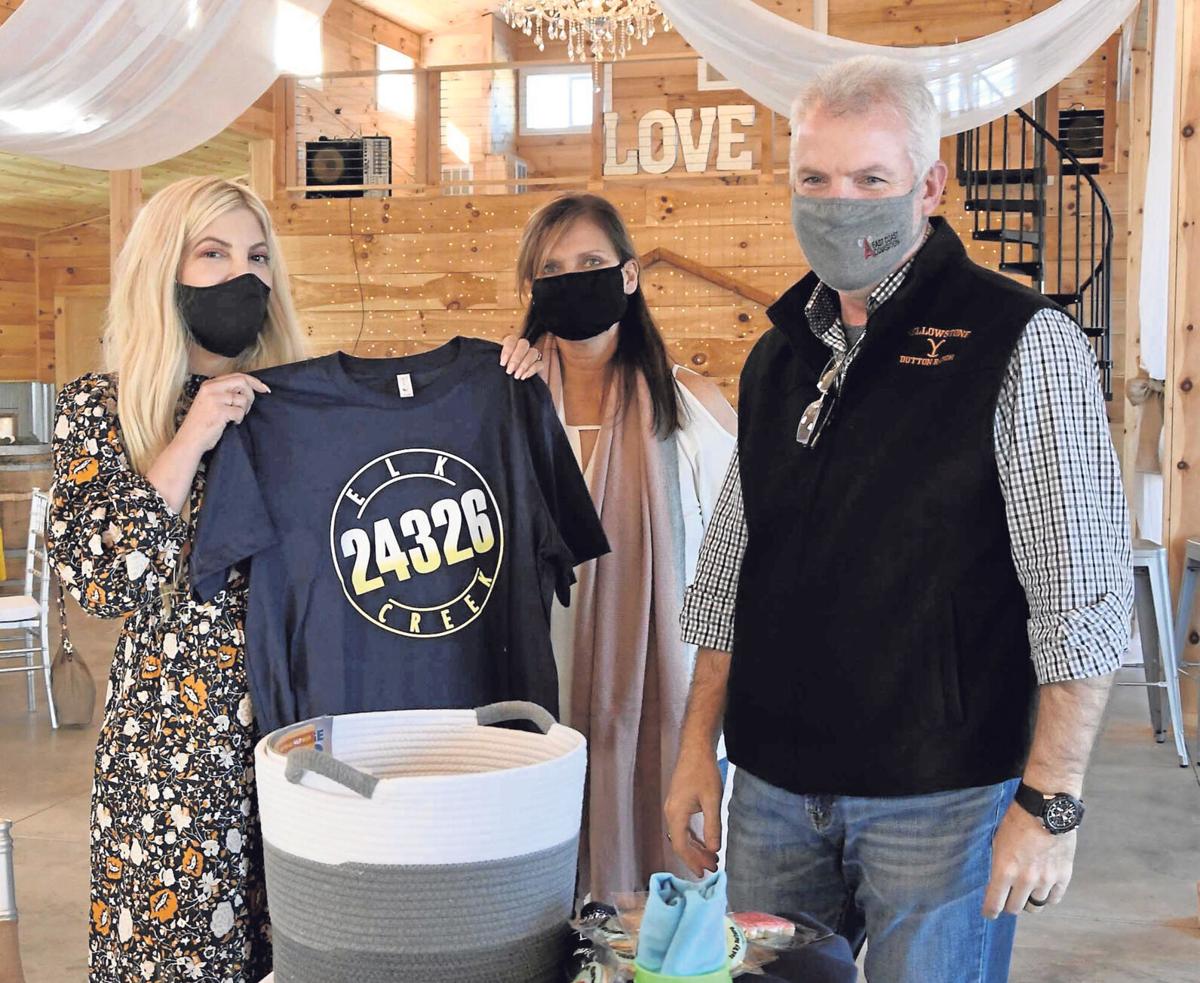 Before she left the area, Chris Cox and his wife, Joy, gave Spelling a gift basket that included a T-shirt designed by Creative 7 Concepts in Wytheville. 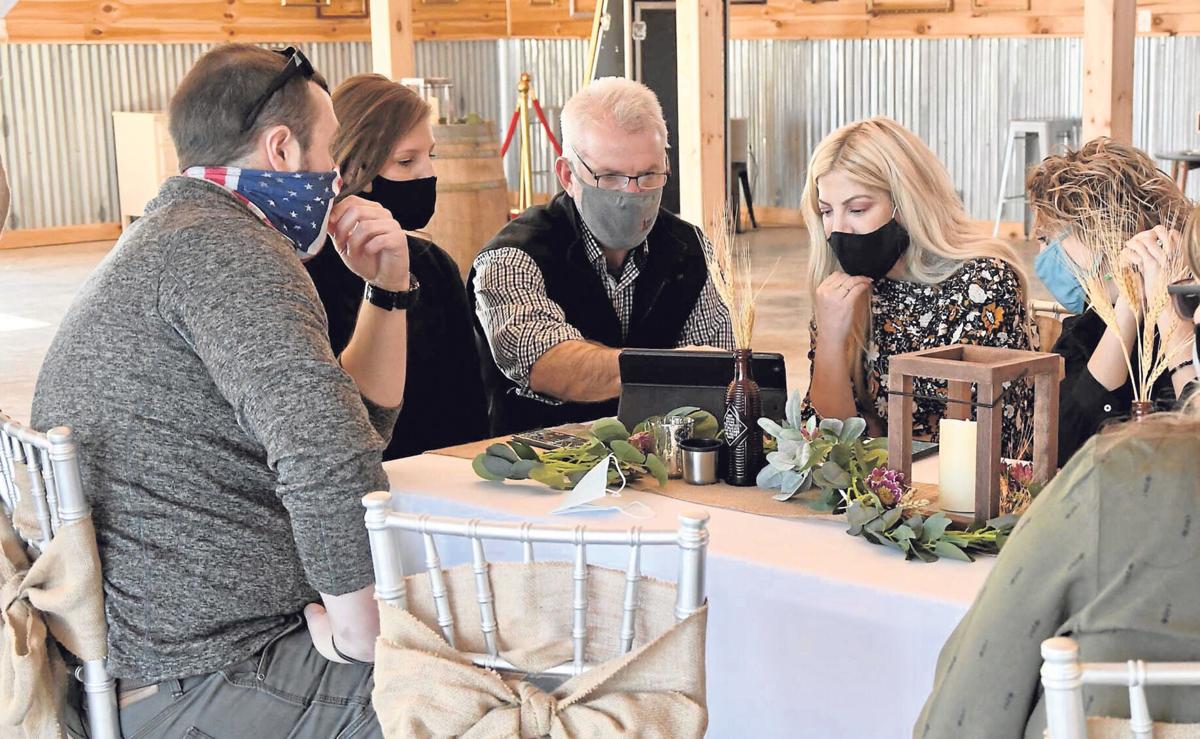 While in Grayson County last week, Tori Spelling met with Connor Patton of Wytheville and his fiancée, Lacey Frye of Marion, to discuss their wedding. From left, Patton, Frye, Chris Butler, Spelling and wedding planner Erin Cox of Blue Ridge Wedding and Events. 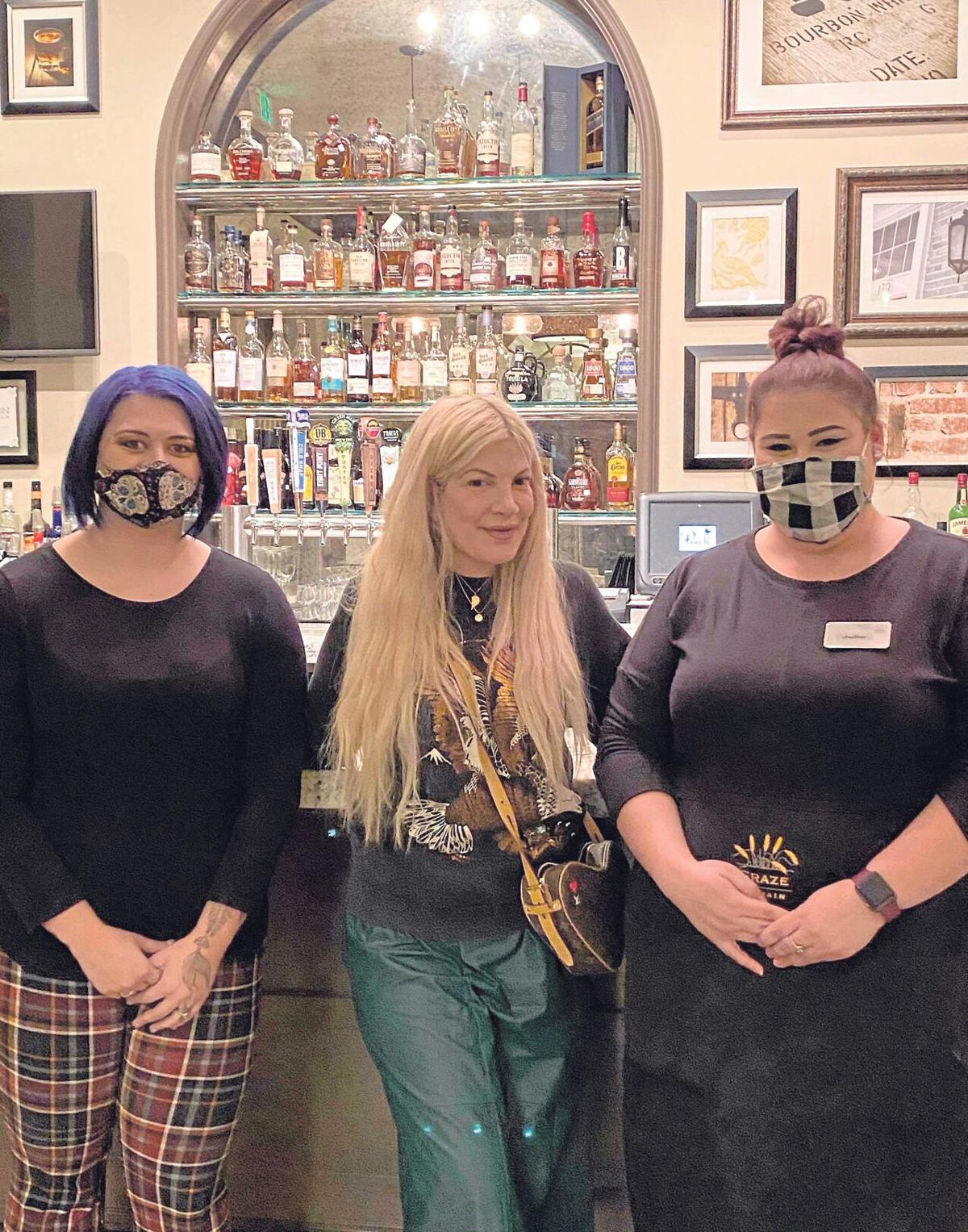 WYTHEVILLE, Va. — When Julie Collins, a server at Graze on Main, walked up to the table to take orders, she thought she recognized the woman with long blonde hair. But she couldn’t put a name with the face.

So, she asked her manager, Kayla Conley, to take a look.

Collins and Conley decided to let Spelling and her friend eat in peace and finish their meal before thanking them for choosing Graze on Main in Wytheville.

“We didn’t make it known that we knew who she was until after her dinner was finished,” Collins said. “We didn’t want to be overly excited and wanted to wait until they were done eating. That way, they didn’t have more attention drawn to themselves, and they could enjoy a nice dinner.”

Spelling asked for recommendations, and Collins suggested quintessential southern fare: fried green tomatoes. Spelling and her friend ordered that, plus a second appetizer of pimento cheese dip. For dinner, Spelling had the Salmon Wellington and her assistant ordered the wagyu filet. For dessert, it was the restaurant’s popular carrot cake.

“She was very, very nice,” Collins said. “She was on video chat with her family back home and said, ‘Look, I want to give you a glimpse into my world back home.”

When she looked, Collins saw Spelling’s large family painting their pot-bellied pig pink. Spelling and her husband, actor Dean McDermott, have five children, plus a son from McDermott’s previous marriage.

“They seemed like they were having a good time; everyone in the background was giggling, and it was nice and sunny,” Collins said.

“She was really personable and didn’t come off as not wanting to get to know us. She wanted to take a picture with both of us, and she followed me on Instagram so I could see the photo, and so she could follow me as well,” Collins said.

Spelling is famous for all kinds of reasons. Her father, Aaron Spelling, was one of the country’s most prolific television producers from the 1960s to the 2000s. His credits include “Honey West,” “Charlie’s Angels,” “The Love Boat,” “Dynasty,” “Beverly Hills 90210,” “Melrose Place” and “Charmed.”

Tori Spelling starred as Donna Martin in the TV series “Beverly Hills 90210.” She has appeared in a number of TV shows and films. In addition, she and McDermott have starred in several reality shows. Spelling has also authored several books.

So, how did she get to Wytheville?

Chris Butler, owner of Eagleview Event Center in Elk Creek, can answer that question. He said Spelling spent a week in the area because she needed a quiet place to work on a project, which he declined to discuss. When she called him about his facility a few weeks ago, he thought someone was pranking him.

According to Butler, Spelling spent a few nights at his facility, which has a small venue that caters to 50 people, along with a bride and groom suite. There is also a large event center that holds 250 people.

During her time in Elk Creek, Spelling met with a couple that plans to marry in October and their wedding planner to discuss ideas for the wedding. Spelling drew inspiration from her book, “celebraTORI: Unleashing Your Inner Party Planner to Entertain Friends and Family,” Butler said.

While in the mountains, Spelling visited the area and recorded her podcast from Elk Creek. The podcast, 9021OMG, features Spelling and fellow 90210 co-star Jennie Garth.

Before Spelling left, Butler gave her a gift basket with all sorts of goodies, including items from Grayson County and T-shirts and sweatshirts designed by Wythe County’s Julie Compton at Creative 7 Concepts.

Butler said there are plans for Spelling to return to the center this summer, then hopefully again in October for the wedding.

'For All Mankind' take a giant leap into alternate world

If, as actor Joel Kinnaman contends, you become a new person every 10 years, that bodes well for his character in “For All Mankind,” a fictionalized look at the space race.

Frye played the 8-year-old Punky in the original NBC series. Now the show is back, and she is too.

Allen and Karn weren’t just toolin’ around on “Home Improvement.” They actually do like tinkering in a workshop.

The 78th Golden Globe Awards airs Sunday, Feb. 28. But in the meantime, you can stream these 10 shows, all of which feature actors currently nominated for their film roles.

Before she left the area, Chris Cox and his wife, Joy, gave Spelling a gift basket that included a T-shirt designed by Creative 7 Concepts in Wytheville.

While in Grayson County last week, Tori Spelling met with Connor Patton of Wytheville and his fiancée, Lacey Frye of Marion, to discuss their wedding. From left, Patton, Frye, Chris Butler, Spelling and wedding planner Erin Cox of Blue Ridge Wedding and Events.