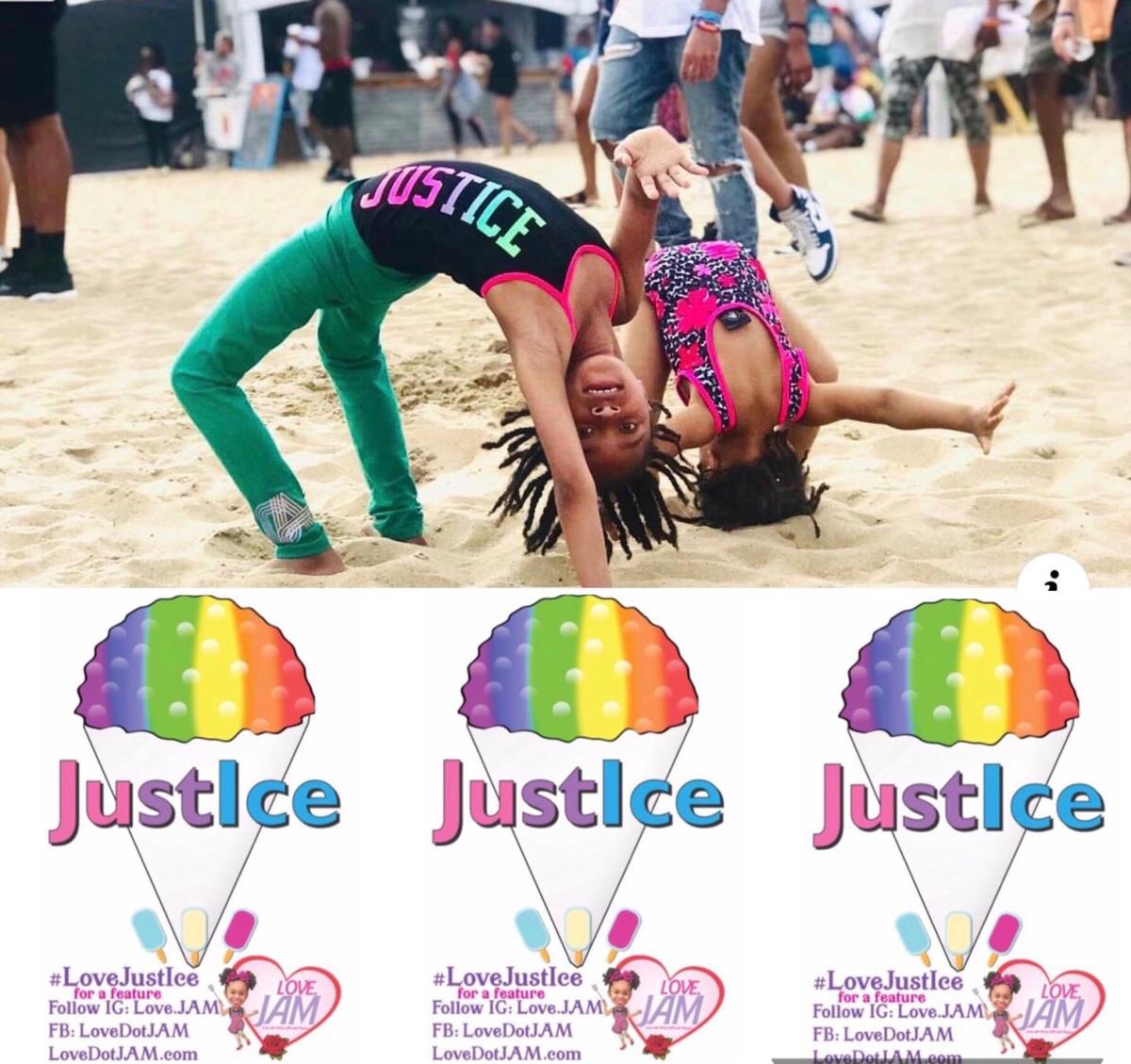 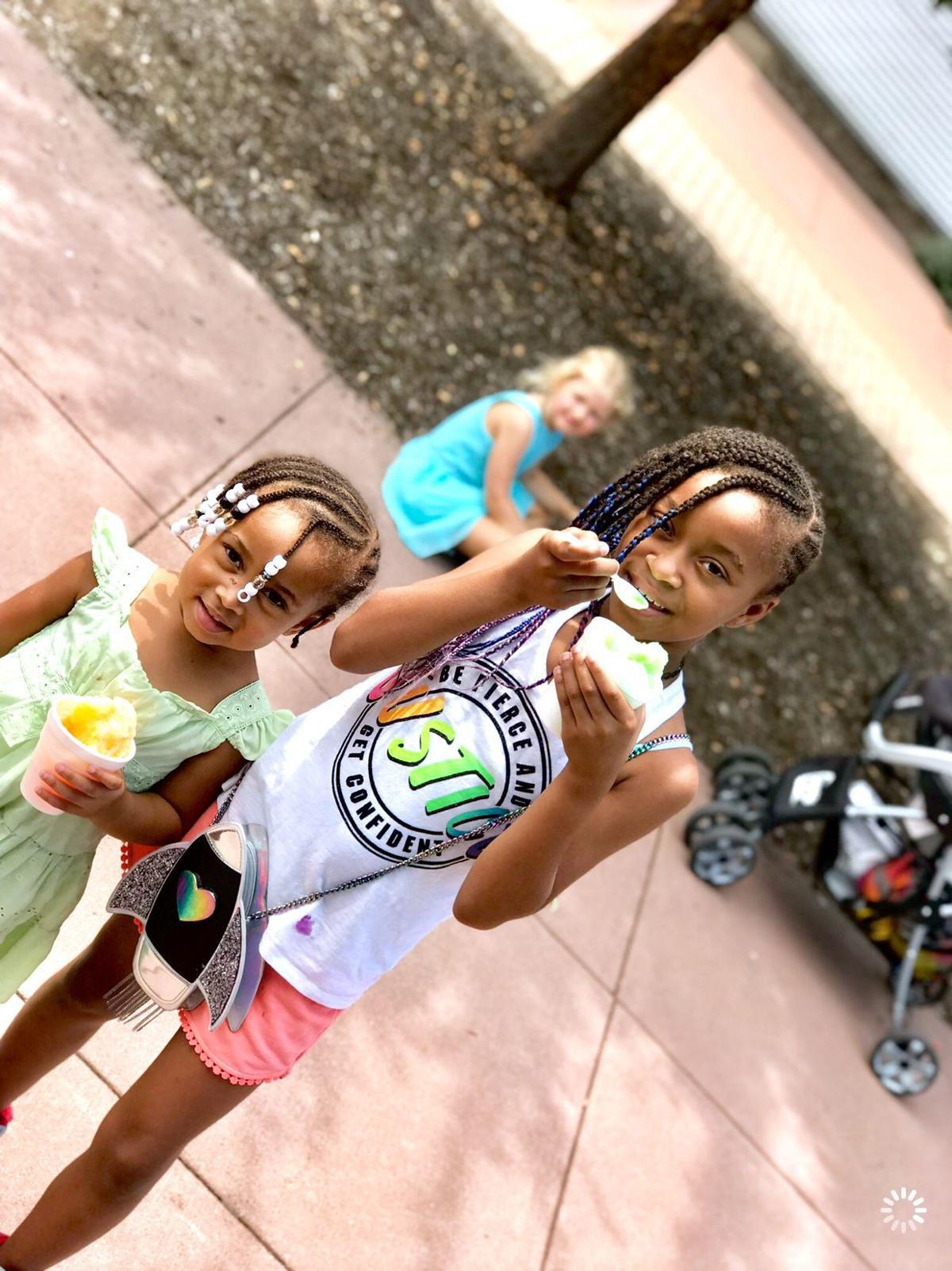 Justice Meusa (right) and her sister Journey enjoy a treat. A thriving business began all because mom LaTricia decided to test drive a church van on a whim.

That’s how 9-year-old Justice Meusa starts her story when I ask how she came to own an ice cream truck.

Just six weeks after she was born in November 2010, Justice was diagnosed with cystic fibrosis. CF is a hereditary disease that affects the lungs and digestive system. While it can be treated, cystic fibrosis cannot be cured and leads to shorter-than-normal life spans.

Justice is a relatively shy kid, so her mom, LaTricia Meusa, prodded her along while she told her story recently, jumping in to clarify or add context.

LaTricia was scared and confused when she heard the diagnosis. It was the first time she’d even heard of the disease. Cystic fibrosis is rare in African-American people — out of all CF patients in the U.S., only 9% to 14% are African-American.

Justice takes different medications and does various treatments but has still has had to be hospitalized three times .

The second hospital stay came when she was in kindergarten. With a few weeks left in the school year, complications of the disease came out of the blue.

It was a really scary time for LaTricia. She didn’t know what brought on the sudden symptoms, but she now thinks it could have been because of a misadministration of medication at school.

Justice started missing out on everything a kindergartner has to look forward to: her class’ ice cream party; field day at her school, O.B. Gates Elementary in Chesterfield County; and saying goodbye to friends before summer started.

LaTricia hated seeing her daughter upset. It may be impossible to fully understand the heartbreak of a mother watching her 6-year-old cry in a hospital bed.

Then, one day, LaTricia came across an old 15-passenger church bus online and had a business idea.

She took her younger daughter Journey — only a year old at the time — out for a test drive.

The bus was being sold by a retailer of handicap vehicles, but because it was a trade-in and not actually handicap accessible, the retailer was practically trying to give it away.

They took it out around the block. LaTricia had never driven a bus before. She didn’t know a thing about the ice cream industry. But, as she pulled back into the parking lot, she decided the bus would make a perfect ice cream truck. She bought it on the spot.

LaTricia drove back to the hospital to tell Justice her plan. They decided to call their new business JustIce.

One of Justice’s first memories after getting out of the hospital that summer is driving around Chesterfield in the bus to pick up seven of her family members — back when the bus still had seats — and going out for ice cream.

LaTricia did practically all the work of converting the bus herself. She tore out the seats. She researched the types of freezers they would need. She bought all their equipment. She spray painted the outside — blue on the top half, pink and purple on the bottom and sprinkles painted on the roof. She did research into the menu items they would have and the types of ingredients they would need.

Her dad helped out here and there, and she got someone else to do the electrical work, but most of the blood, sweat and tears that went into the bus are LaTricia’s.

They got the proper permits and licensing that allowed them to shop at restaurant supply stores, and soon the bus was ready for action.

But LaTricia makes it clear that the business is Justice’s. She considers the 9-year-old to be “in training” right now, but hopes to give Justice full control in the next five to 10 years.

Their first event was on the anniversary of Justice being discharged from the hospital. It was field day at O.B. Gates — the same event Justice was so upset about missing one year earlier.

The first summer, they would go to parks and find street locations, but since then the bus almost exclusively attends scheduled events: birthday parties, festivals, fairs.

A thriving business began all because LaTricia decided to test drive a church van on a whim.

“I kind of had an idea of where this was going,” she said, “but I had no idea it would be three years later and we’d still be progressing.”

Justice and Journey are always there to help. Justice likes to work inside the bus while Journey’s skills are put to use outside talking to customers.

The difference between the girls is evident even from a first meeting. Journey is a ball of energy — laying on her mom’s lap and jumping into the conversation to make sure I know Justice is her big sister. On the other side of LaTricia, Justice sits quietly and patiently, watching her mom as she speaks.

In many respects, Justice is just like any other 9-year-old. She likes to play video games and her favorite part of working at JustIce is eating the merchandise.

She prefers shaved ice to ice cream, and her favorite flavors are blueberry, green apple and pomegranate.

Cystic fibrosis is considered an “invisible disease,” meaning most people aren’t able to tell that Justice is sick just from looking at her.

But, of course, her illness can sometimes be a challenge. Those with CF lose salt at much higher rates than average, and last July, Justice fainted while they were working a festival.

LaTricia’s first aid training kicked in, and Justice regained consciousness before the paramedics arrived. LaTricia wrote about the experience on Facebook as a reminder to everyone with the condition to stay hydrated.

A large goal of the truck is to raise awareness that they’re able to do through their website — LoveDotJam.CO — their JustIce Events Facebook page and Instagram.

Last summer, LaTricia worked the Cystic Fibrosis Brewers Ball, and, while Justice wasn’t actually there, she recorded a special message to be played at the event.

One of the reasons LaTricia likes working in the truck is because she’s gotten to share Justice’s story and meet many other people affected by CF that she never would have otherwise.

Last summer at the Chesterfield County Fair, LaTricia met a man in his 50s living with CF — a rarity, considering the life expectancy for someone with CF is 37 years.

“When he told me his story, I burst into tears,” LaTricia said.

This fall, the family moved to Miami, where LaTricia now works as a middle and high school counselor, but the bus stayed in Richmond. The original plan was for the family to return for the summer to run the bus, but COVID-19 got in the way.

Many of the events they were scheduled to attend have been canceled due to the pandemic. As much as she’d love to be back out there, LaTricia is worried about the rising number of cases, especially because CF affects the respiratory system so heavily.

“I just don’t want [Justice] on the bus and exposed to too many people,” LaTricia said. “I don’t know exactly what’s going on, so I feel like it’s better safe than sorry.”

LaTricia has hired people to take over operation of the Virginia-based truck next season and plans to invest in another in Florida.

Now a mother of three — LaTricia gave birth to her third daughter three weeks ago — she thinks this break is a good time to regroup and make some changes to the business.

They’re updating the website and still looking for just the right truck to expand. While JustIce has used prepackaged tubs of ice cream in the past, the company is starting to experiment with its own recipes.

LaTricia would love to grow the business even further — possibly even nationally — but wants to see how managing two trucks goes first.

“You let me know, boss,” she said, turning to Justice.

Justice says she’d be open to the idea if the new trucks cost $10. After a quick pause to think, she walks back her statement.

It’ll be a few more years before Justice is really at the helm, but she already knows what her first order of business will be: come back to run her original bus in Richmond.

Seasonal taste: a peach of a sweet memory

Regular as clockwork, each year right around now, I’d receive the call one morning.

Pair up, while socially distancing, with to-go food and cocktails in Richmond

You drink, you eat. At least that’s the rule these days when it comes to takeout and delivery in Virginia. In April, as a lifeline to local fo…

Justice Meusa (right) and her sister Journey enjoy a treat. A thriving business began all because mom LaTricia decided to test drive a church van on a whim.