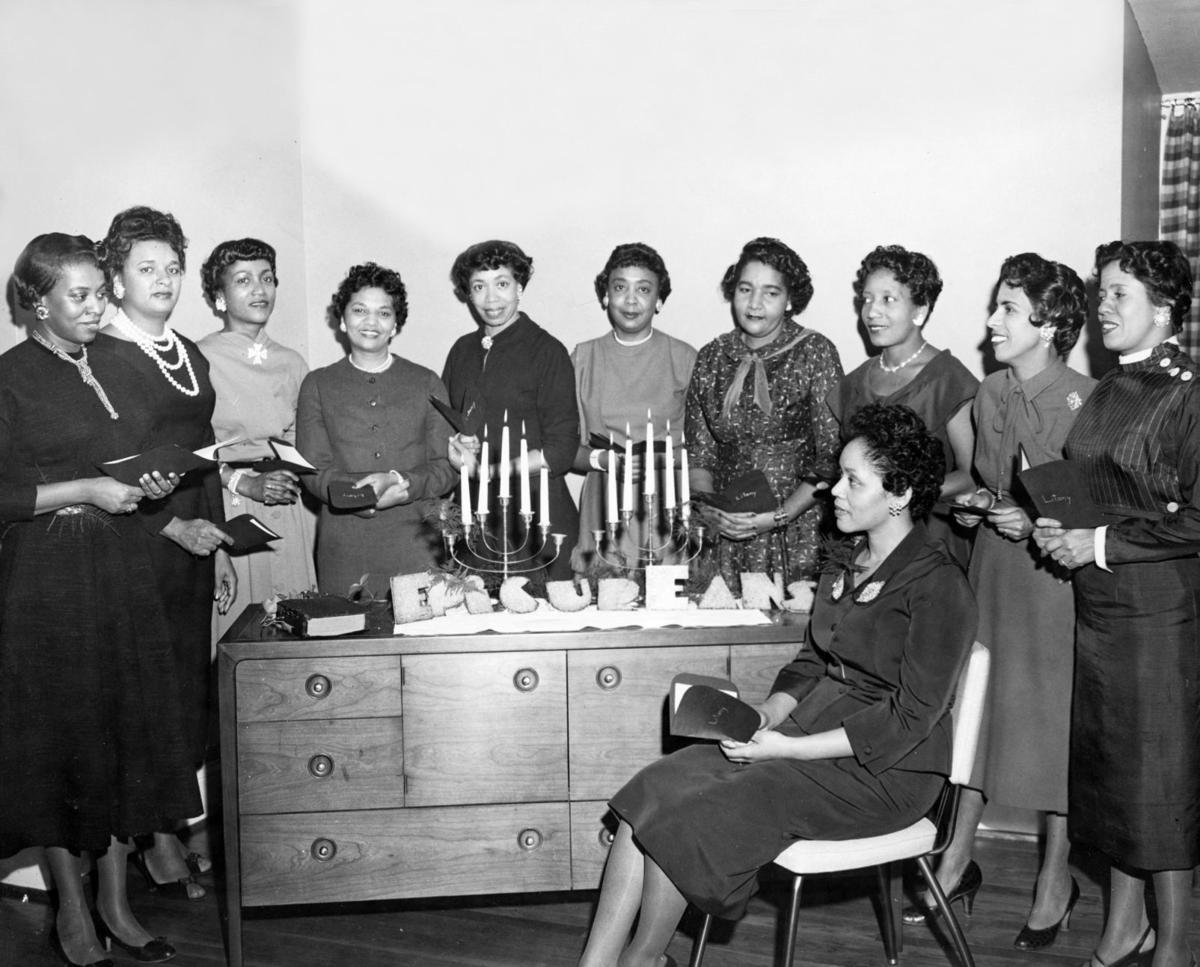 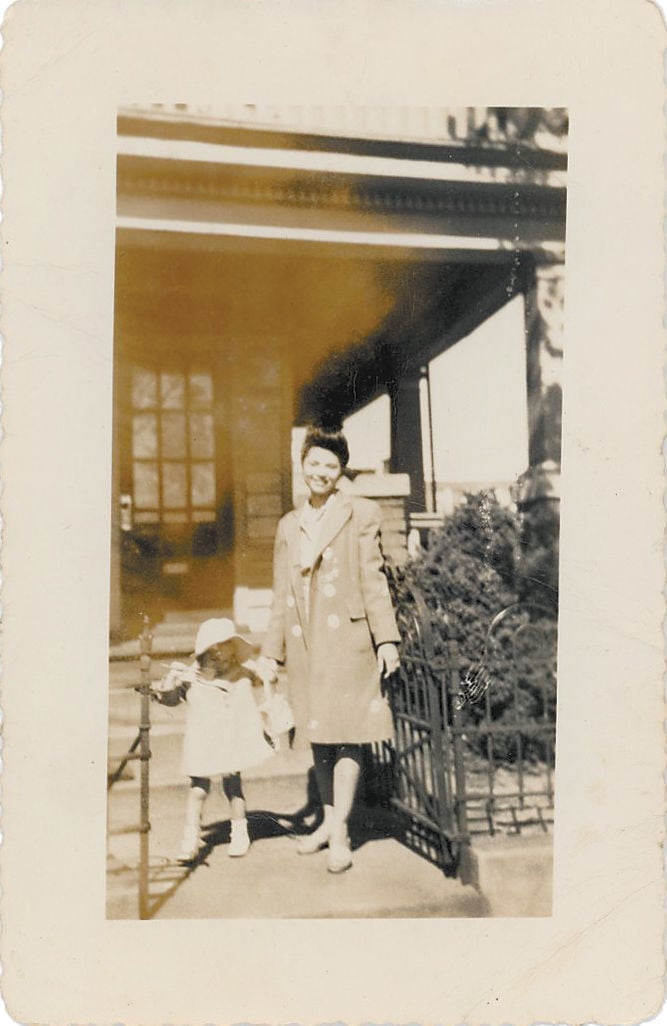 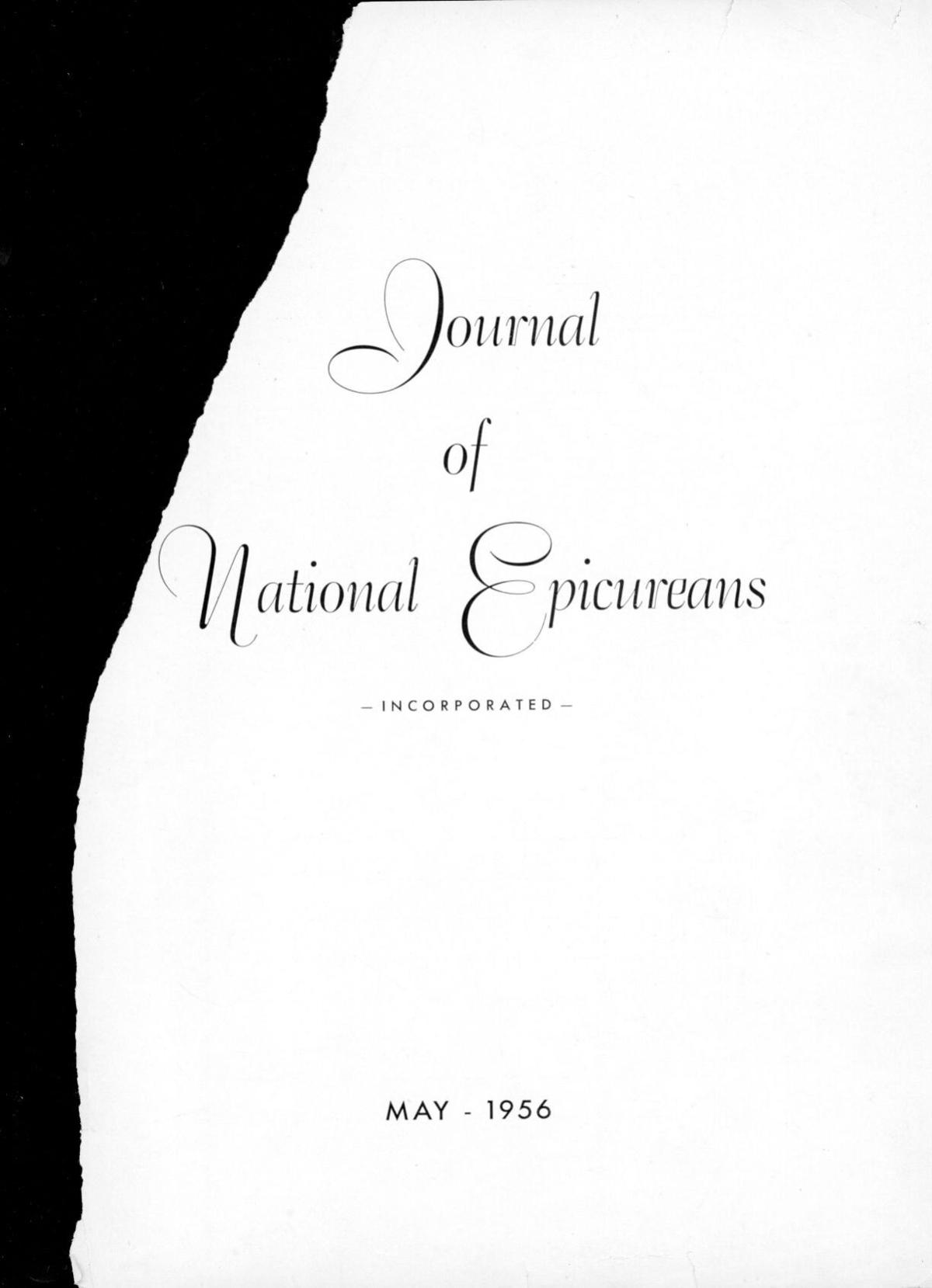 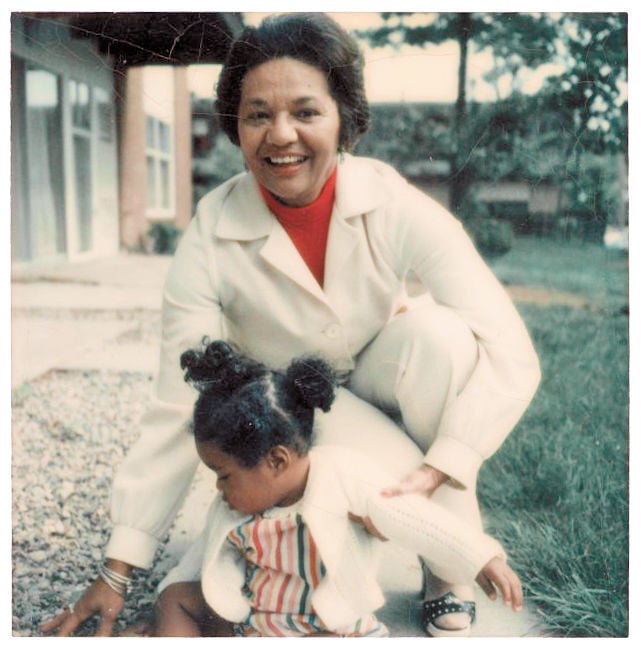 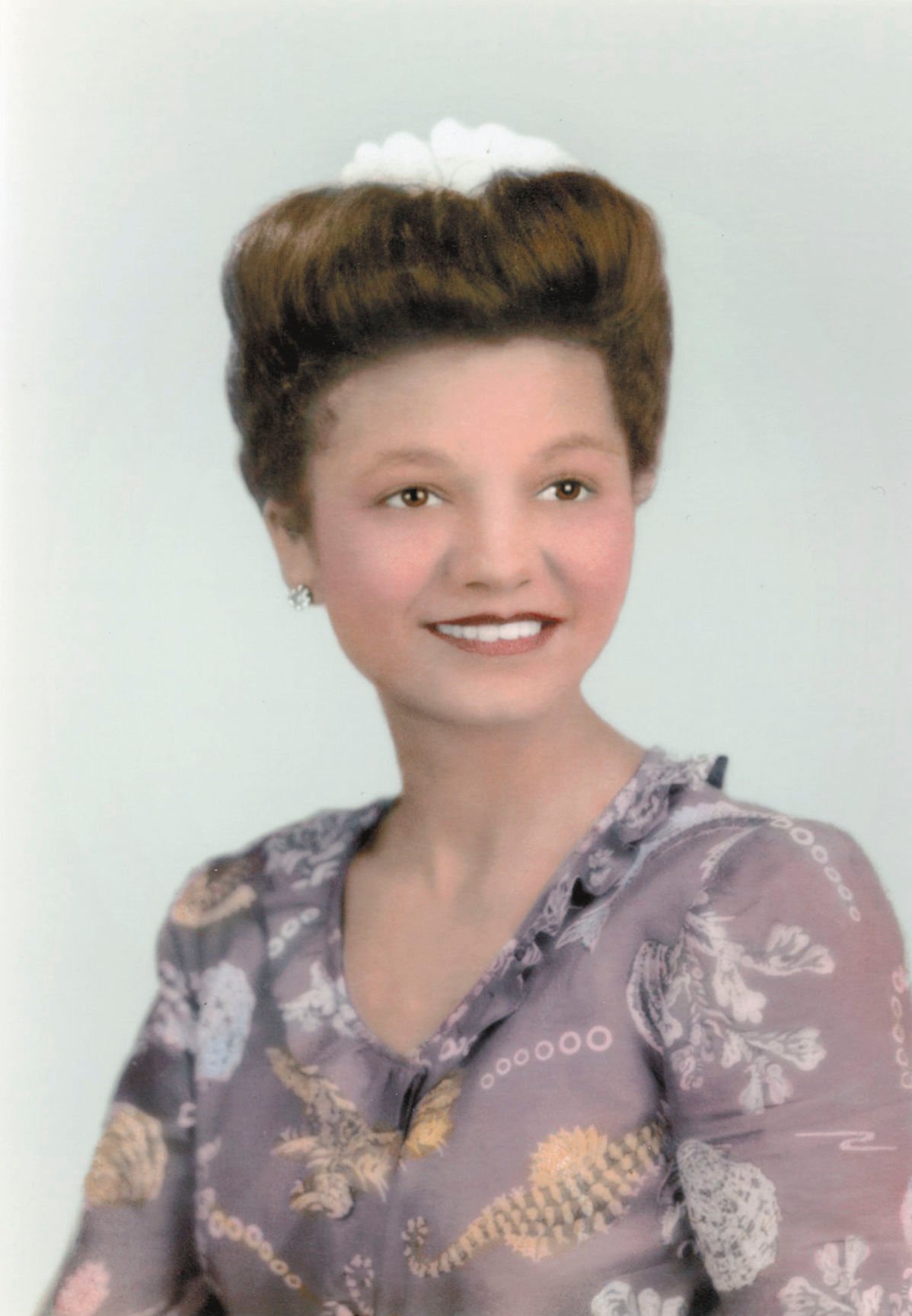 Mary Hewlett Brown’s family says that as a teacher, she considered education to be an avenue to success.

Kimberley Buster-Williams celebrated a joyous Christmas Day with her family in December, but it would be an unwrapped box she opened a day later that would turn out to be the most beloved of gifts.

Buster-Williams, of Fredericksburg, stumbled onto an unknown family legacy when she began looking through family pictures and documents last December that had belonged to her grandmother, Mary Hewlett Brown. The family matriarch and native Richmonder died in late January at age 98. Those who knew her called her Lollie.

Those she held closest in her heart called her “Mama Lollie.”

Buster-Williams intended to use the box of photos and documents to gather information for the obituary she would eventually write for Mama Lollie. That day after Christmas, however, as Buster-Williams began sifting through the contents of the box, she found a folder labeled “Epicureans,” an organization she’d only ever heard of in passing.

Earlier this year, with those same documents spread out on a table before her, Buster-Williams said she was curious back in December about what she found. There was a 1944 photo of 11 young, well-dressed Black women surrounding a table with what appeared to be cut-out letters that spelled “EPICUREANS.” Her grandmother was there, in the midst of the group.

One document listed her grandmother’s name first under “founders” on a page torn from an Epicureans’ journal from 1956. Buster-Williams also found a written history of the organization. The story said the history of the Epicureans can be traced back 1944, when Mary Hewlett Brown and a group of her high school and college friends formed a social club, and shortly after she became the first president of the Richmond chapter — what would be lead to the first chapter of the National Epicureans, Inc.

“I was familiar with the group,” Buster-Williams said, “but I never connected my grandmother with it at all.”

In fact, when she starting looking online for more information, her grandmother’s name was listed on the national organization’s website, but without any context as to her involvement in its early days as a founder of the Richmond club.

National Epicureans, Inc. was officially chartered in Virginia in February 1952, according to its website, nearly a year after the first chapter was officially established in Richmond. It went on to establish chapters in Danville and Portsmouth, and eventually Washington, D.C., that same year.

Today, there are 21 chapters nationwide. According to its website, the organization inspires its members to “high moral, social and civic standing” and with that, they promote and sponsor cultural, literary and charitable efforts. One of its largest projects is raising money for sickle cell disease.

But in 1944, at its very core were women who needed one another. Men were off to fight in World War II. Segregation was a way of life for Black women in Richmond, particularly Mary Hewlett Brown, a woman her children and grandchildren called a Richmonder through and through.

Active within Black society, the Browns lived in the city’s Northside and were neighbors to the Lamberts (the late Virginia senator Bennie and his wife, Carolyn). They hung out in Battery Park, watched Arthur Ashe on the tennis courts during the summers and were patrons of Consolidated Bank and Trust Company, the bank that started as St. Luke Penny Savings Bank, founded by Maggie L. Walker.

Mama Lollie was a voracious reader, her family recalled, and was well-informed culturally and politically. She was an educated Black woman in the 1940s, with a degree from Virginia Union University, which she used to teach before raising her family.

She preached the importance of education as the means to success, despite growing up in an era of Jim Crow laws and systemic racial barriers.

“When you start doing research, you’re reminded of things that are happening at that time,” Buster-Williams said. Her grandmother recalled stories of not being allowed to shop for hats at department store Miller & Rhoads, and boycotting retailer Thalhimers for its treatment of Blacks. She recalled having to move off the sidewalk if a white person was walking by, and a long-told family tale recounted such an incident. Once, her “spectacles,” as she called them, were broken when a white man hit her in the face with his Bolo bat toy — a wooden paddle with a rubber ball attached to it by elastic — as he passed her on a city sidewalk.

“I can only imagine how difficult ... or frustrating things were for her growing up,” Buster-Williams said about her grandmother, noting that often when the older woman told stories, “she wasn’t bitter about it — it was just a fact.”

Buster-Williams continued: “My impression is that she, and her friends, dealt with the daily slights and learned to adapt ... by leaning on each other through social groups like the Epicureans.”

But the fact that her grandmother was likely a founding member for what eventually became a national organization — and that history was somehow lost or overlooked — pushed Buster-Williams to act. She said she spent her holiday researching all she could. She learned that Virginia Union archives contained a special collection about the National Epicureans, including photos and documents that she already had. To her surprise, however, she had items that even those archives didn’t.

Using all of that information from the archives, the national organization and family history, Buster-Williams pieced together a timeline.

Early records show that her grandmother, along with a group of her friends, started a social club in the early 1940s, of which she became its first president. The name Epicureans — or Eppies, as they called themselves — was also decided during those early years by one of Mary Hewlett Brown’s friends.

They also came up with the mantra “Eat, Drink and Be Merry!”

The Brown family moved to Smithfield sometime around 1945, where Mary Hewlett Brown began teaching school. They returned to Richmond by 1950, and by that time, the Richmond Epicureans chapter was organizing to seek a charter, which it did in 1951.

Buster-Williams said there are still missing pieces — particularly between 1945 and 1950 — but that her grandmother shows up in Epicureans photos and documents throughout the 1950s.

Armed with these findings, the national organization updated its history pages to include Mary Hewlett Brown.

Currently, the Epicureans’ website credits Mary Hewlett Brown as the first chapter president in Richmond, and that club ultimately led to the establishment of the national organization.

Tasha Turpin is president of the National Epicureans’ Richmond chapter.

“The ability to eat drink and be merry probably was not as easy as it was today,” given the treatment of Blacks during the 1940s and 50s, she said. “The struggle that it took then — you really needed to have the aptitude and the right attitude to excel.”

Despite the challenges, Turpin said, the founders “still had the ability to find some hope ... in our culture and share that with our families.”

She said today’s members, as the founders decades ago, were college graduates, like-minded women who held themselves and those around them to the highest standards.

“We wanted to make sure we were respected as individuals,” both back then and now, Turpin said. “Everything was about the pride [and] that still holds true today.”

Turpin said Mary Hewlett Brown may not have been directly affiliated with the national organization, though “we do recognize her as a founder of the Richmond club,” she said, the “genesis” for today’s national club.

In fact, nearly two dozen Richmond-area Eppies attended her funeral in January. Some wore red roses, a signature characteristic of members of the National Epicureans.

“It really did start here,” Buster-Williams said. “It just seemed so like her, too, that she would have a friends’ group and they would meet at her house and have that discussion,” about forming a social club as a means of connecting with one another.

“Each time I saw pictures of my grandmother or read her name, I was drawn in even more,” Buster-Williams said, adding her grandmother was young when she organized that group, and “I was impressed with the vision and strength of the founders ... and with how much care was taken to keep the organization intact and growing,” despite outside forces working against them during that era.

In the days leading up to Mama Lollie’s death, Buster-Williams said she asked her grandmother to tell her about the Epicureans. She was met with a quick response from the older woman, a brief lucid moment from nearly a century of living.

Mary Hewlett Brown’s family says that as a teacher, she considered education to be an avenue to success.