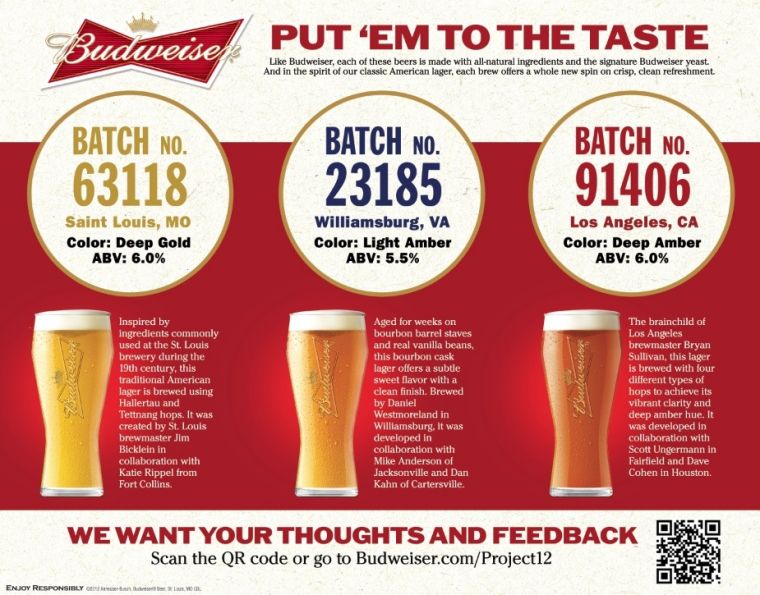 A beer created by the brewmaster at the Anheuser-Busch brewery in Williamsburg is part of a Budweiser limited-edition sampler pack this fall, the company said this week.

The beer named for the 23185 ZIP code was part of a promotion called "Project 12," in which brewmasters at 12 of the company's breweries created small-batch beers using yeast that is directly descended from the original Budweiser recipe from 1876.

After the beers were pared to six, consumer feedback this summer helped pick the three beers — from the Los Angeles, St. Louis and Williamsburg breweries — to be included in the sampler 12-pack that will be available nationwide at the end of October.

The Batch No. 23185 beer was developed over a couple of weeks in conjunction with brewmasters in Florida and Georgia, said Williamsburg brewmaster Daniel Westmoreland.

After a few different ideas, what ended up filling the bottles that will soon hit shelves is a light amber lager aged with wood from bourbon barrels and spiced with vanilla.

"Having this package coming out with Williamsburg on it (and the) 23185 (ZIP code) on it is not only a good thing for Williamsburg, but for the state," Westmoreland said.

Westmoreland, who has been a Budweiser brewmaster for more than 30 years, said he was excited that beer drinkers enjoyed the lager enough to put it in the top three.

Peter Kraemer, a fifth-generation brewmaster who leads Anheuser-Busch's brewing operations in North America, said the project was an opportunity for the company's brewmasters to have "fun experimenting with new ingredients, flavors and brewing processes to bring beer lovers some new options inspired by our flagship beer."

The promotion also helps the brewer capitalize on the craft-brew craze that specializes in smaller brews with more distinctive flavors.

With more than 2,125 breweries nationwide, craft brewers make up a nearly $9 billion industry, according to the Brewers Association, the trade group representing the majority of U.S. brewing companies. And the industry, which sold about 11.5 million barrels of beer in 2011, has seen volumes grow 13 percent compared with 2010.

By comparison, the overall U.S. beer market is estimated to be a $96 billion industry and sold nearly 200 million barrels of beer last year.

Joining the Williamsburg-tagged beer are Batch No. 91406, a deep-amber lager using caramel malt, from the company's Los Angeles brewery; and Batch No. 63118, a golden pilsner from the St. Louis brewery that used hops similar to those commonly used there in the late 1800s.