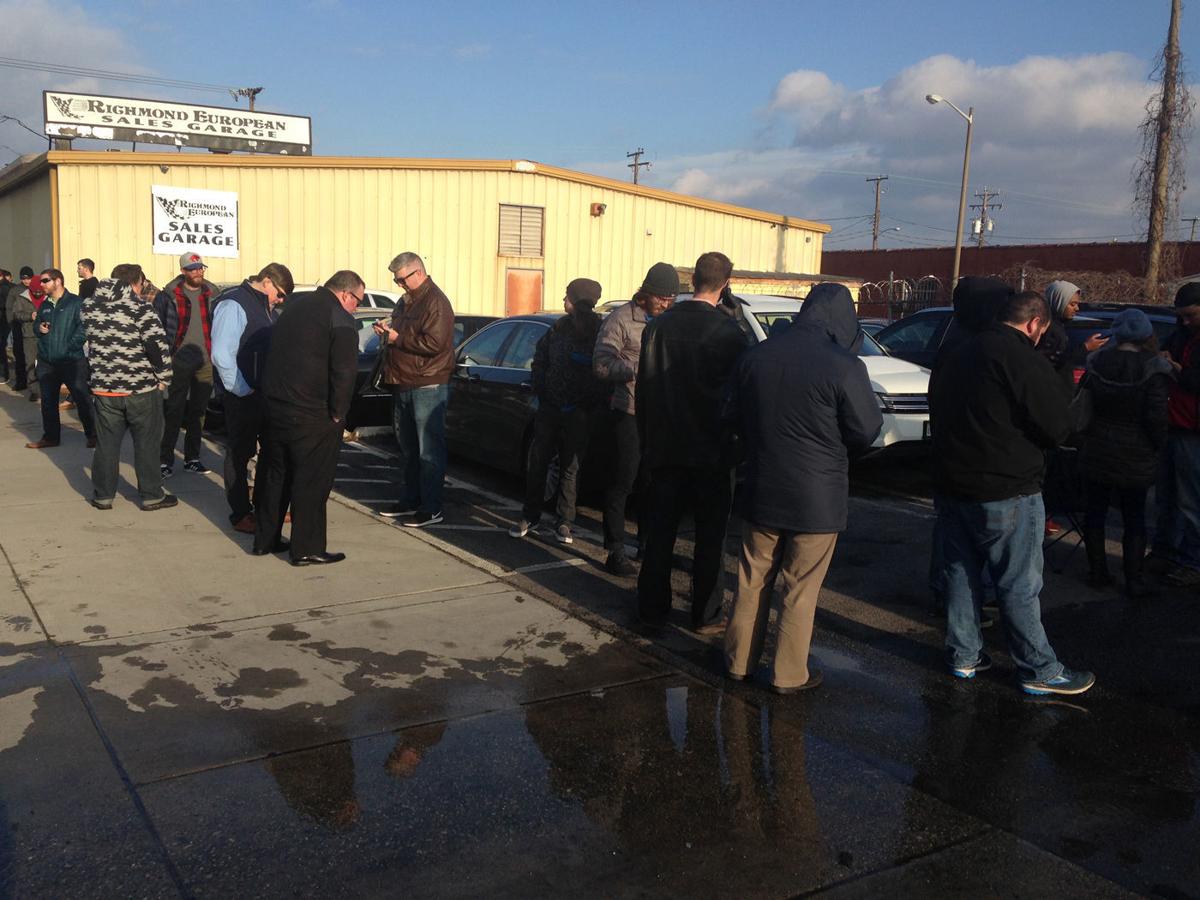 A recent line at The Veil snakes around the edge of the brewery. 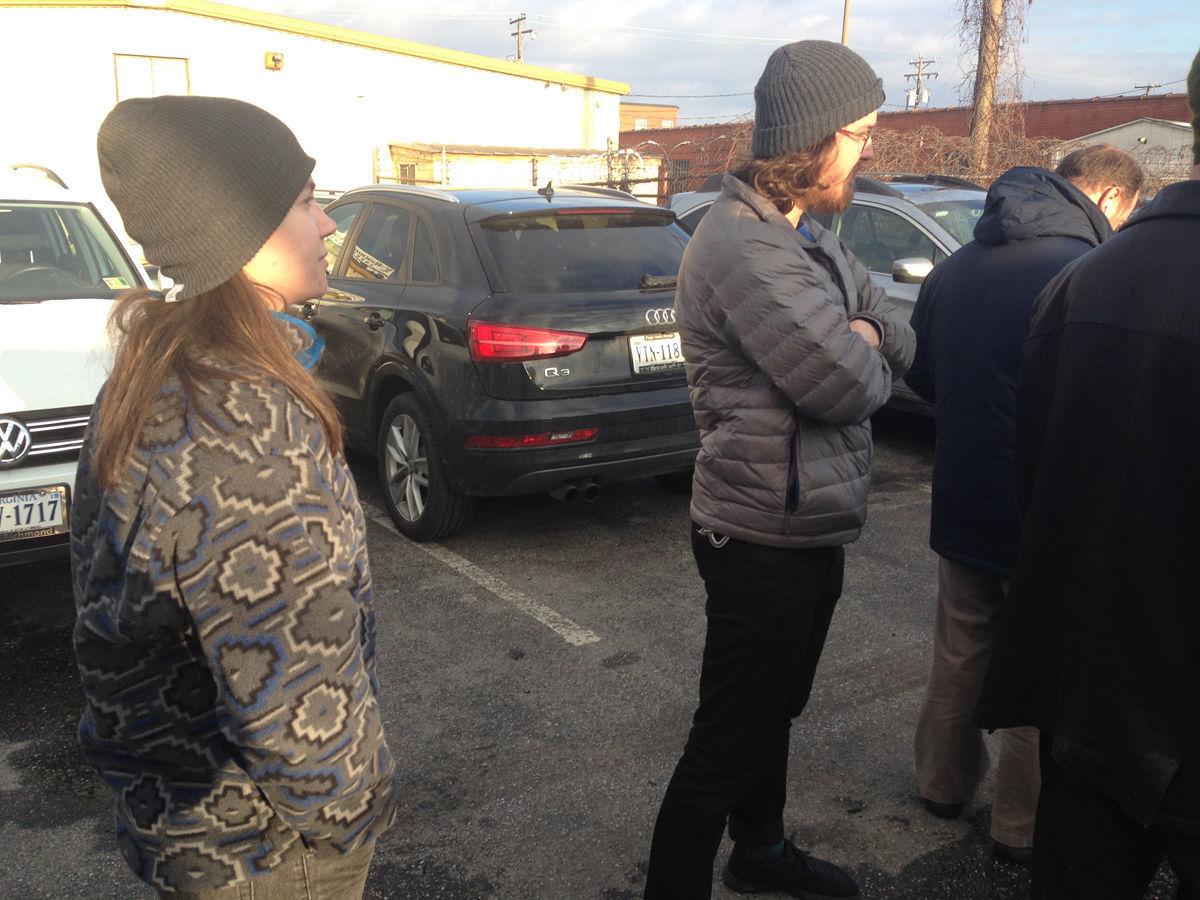 Haley Bergh, 26, waits in the middle of a long line at The Veil. 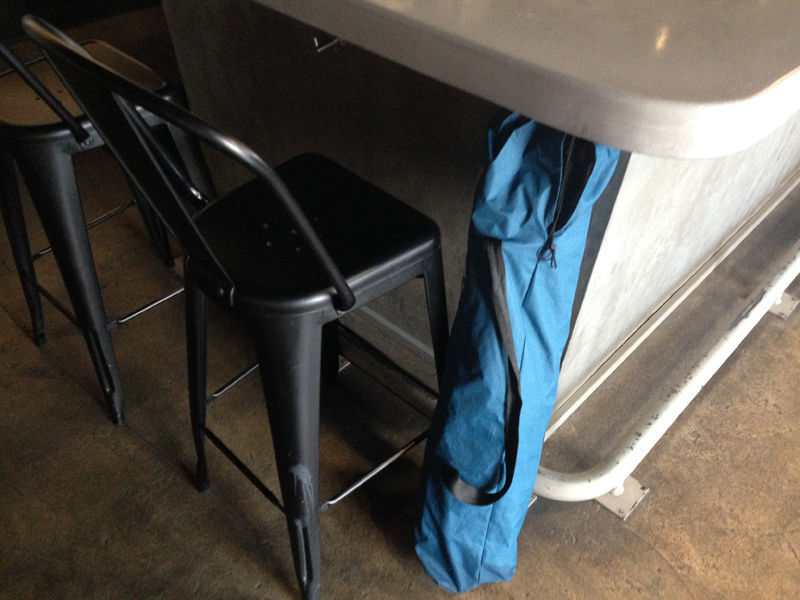 A folding chair from a patron sits near a stool, waiting for the owner to return. 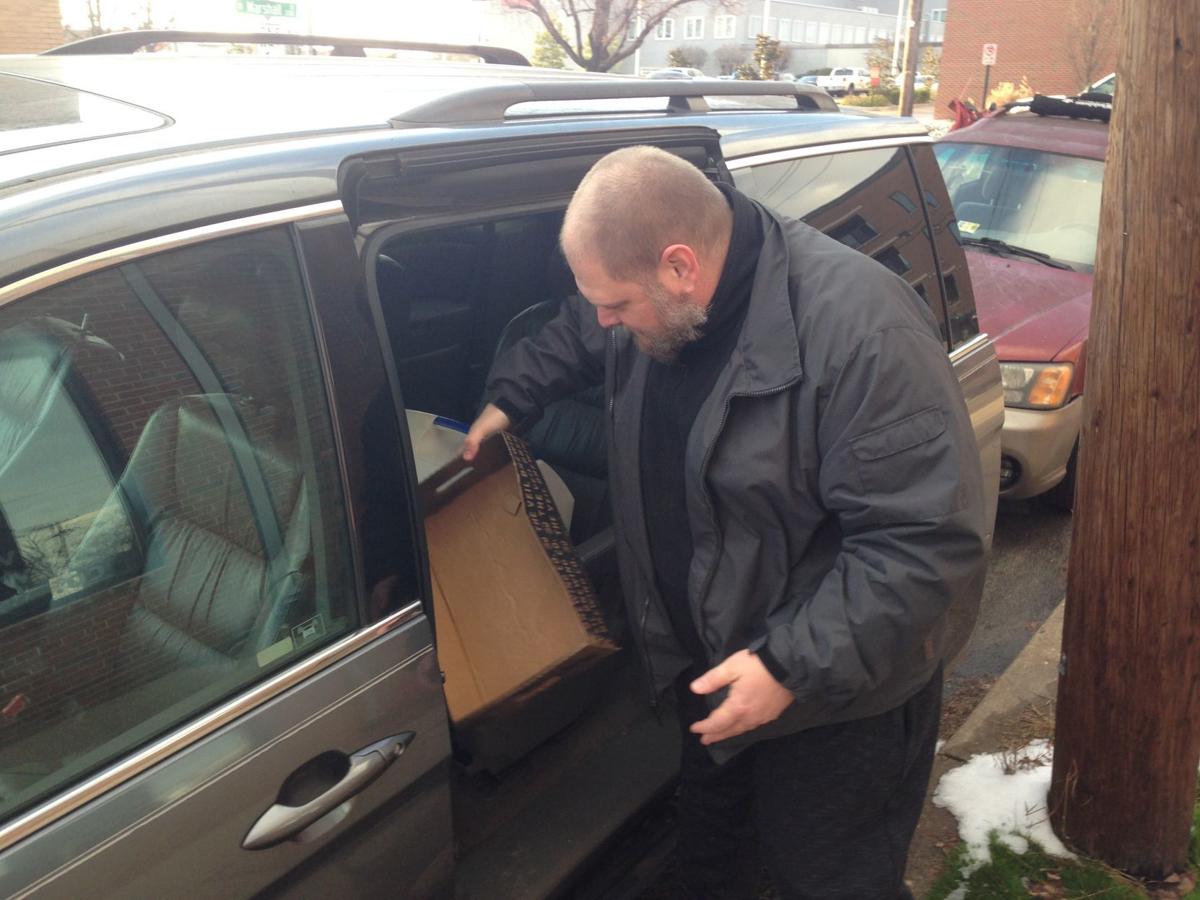 Chris Schmidt loads his haul from The Veil for the day in his car. 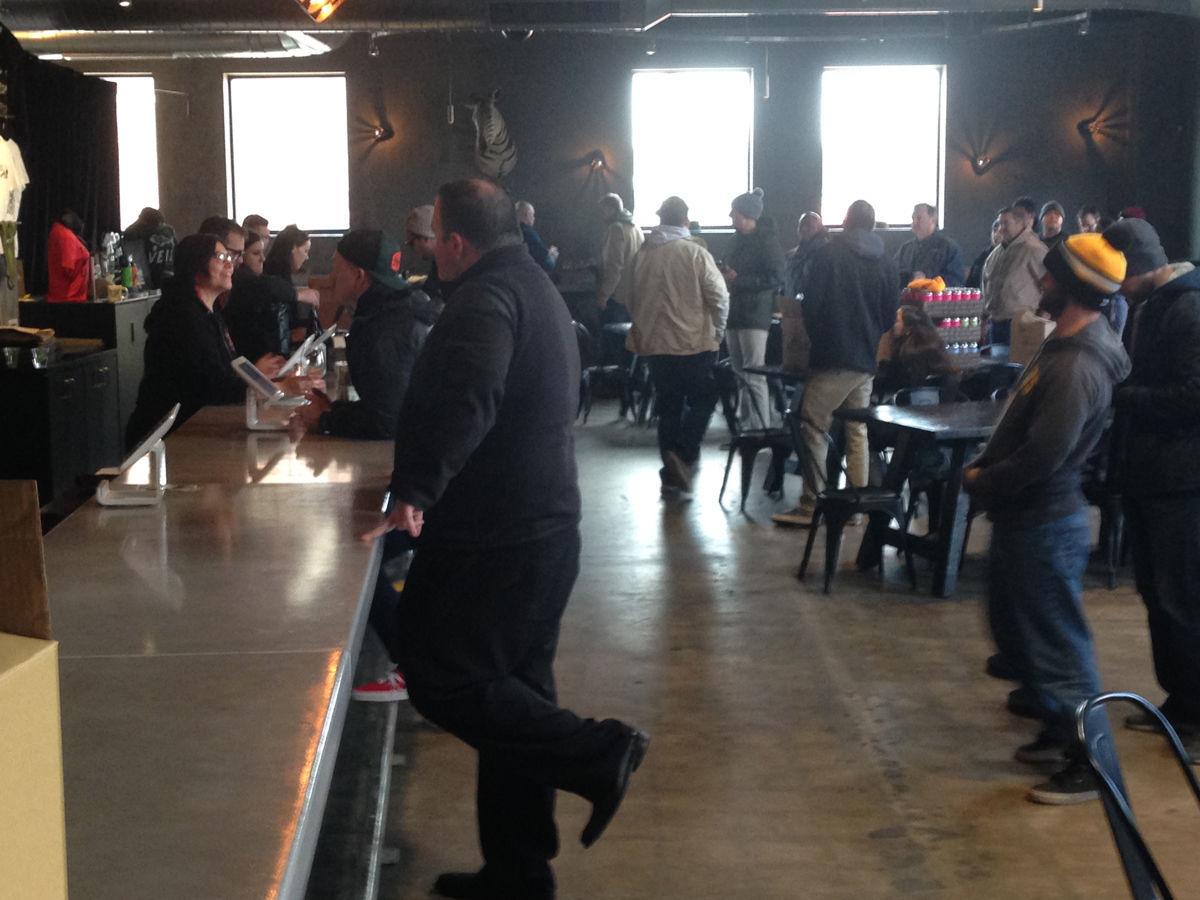 Some of the first people in line begin to buy beer at the counter at The Veil's Vanilla Circle of Wolves release.

A recent line at The Veil snakes around the edge of the brewery.

Haley Bergh, 26, waits in the middle of a long line at The Veil.

A folding chair from a patron sits near a stool, waiting for the owner to return.

Chris Schmidt loads his haul from The Veil for the day in his car.

Some of the first people in line begin to buy beer at the counter at The Veil's Vanilla Circle of Wolves release.

When winter winds start knocking on Richmond’s doorstep, big, fat snowflakes that morph into a messy, panic-inducing snowfall aren’t the only visitor. A bevy of heavy, delicious seasonal stouts from the local breweries also make a welcome appearance – followed by hordes and hordes of incredibly devoted beer hunters.

The well-documented phenomenon of waiting for hours in line for the brewery to open and start selling its coveted product, even in less-than-desirable weather, is known as FOMO – Fear Of Missing Out. More common in glassware, which is almost always only made once, FOMO also applies to first-time Big Brews that fans feel they must try. If a particular beer has a proven track record, its variants are almost guaranteed to go fast. For popular beers, a line usually starts forming at any given brewery – such as The Veil Brewing Co. in Scott’s Addition – at least three hours before the brewery opens. At the two-hour mark, the line has usually grown to dozens. At one hour, the line can easily grow to hundreds.

On a Tuesday in January, with a high temperature barely in the 40s, the FOMO beer of the week was the Vanilla Circle of Wolves, a 12.8 percent English Barleywine made by The Veil. The previous week’s offering, a double barrel version of the same beer (apple brandy and bourbon), primed the pump for many to return. Another draw was the brewery’s cellar sale in which The Veil made several popular previously released beers available -- including a coveted stout called Coconut Sleeping Forever.

A half hour before opening, with chilly winds circling the parking lot, a line easily topping 100 bundled-up visitors waited patiently and chatted with one another. Many brought chairs, which they used to hold their place in line to get a beer or socialize, as long as the people behind them are amenable. (They usually are.)

On social media, the brewery said about 650 bottles would be available. With three allotted per person, anyone in line before the brewery opened was virtually assured to get one.

Usually, the number of sought-after beers is limited – from the low hundreds to the mid-thousands. It’s one of the reasons their value increases in local and national trades. The beer usually sells out within hours, or by the end of the day at latest. Facebook fan pages track the lines and the remaining amounts, giving social media users the option to try their luck when the line has died down. (By comparison, hundreds of cases are usually available for four pack cans, with 24 beers making up a case.)

While the camaraderie between most everyone in line was in full bloom, most people interviewed for this story were notoriously camera shy.

The first person in line that day was Tim Cheng, a 22-year-old who works in commercial real estate. A resident of the D.C. area, he arrived at 12:30 a.m. to sleep in his car and get up before anyone else had a chance to arrive. He was in line to acquire the brewery’s sole “magnum” bottle, which contains 3 times the amount of a regular bottle and costs $125.

Cheng said he has bought or traded for every magnum The Veil has sold, which he estimates to be about 40. The same week he was in line, he proposed to his girlfriend; and he plans to open some of the magnums at his wedding reception at The Veil. Cheng travels down to the Virginia Beach area frequently to spend time with his fiancée, and he swings by The Veil whenever he can if they offer something of interest to him.

“This is my favorite brewery by far because of the people here,” he said. “You can put down a chair and socialize (while you’re in line).”

Some breweries, such as Hardywood and The Answer, have a system they occasionally use for popular releases to bypass the wait time: handing out tickets several hours before the sale begins. Generally, anyone who has a ticket can get a beer or a glass by the end of the day.

If The Veil does have an official line policy, or if there are any plans to modify it in the future, they aren’t telling: When asked about it in an email through their website, the owners replied: “We are continuously thankful for the support of the community. Cheers, Dave, Dustin, Matt.”

How much did Cheng spend on all of his magnums, by the way?

Near the end of the line, rounding the corner off the Veil property, Chris Thomas, 31, checked his phone. An employee of the city of Richmond, Thomas, who lives in Midlothian, has waited in line to snag beers seven times or so in the last few months.

“I’m fairly new to this,” he said. “My friend has connections with breweries all over. I get them for him, and he shares his beers with me.”

If the beer isn’t going to be traded, friends of people in line are the usual recipients. So the time taken to acquire the beer isn’t seen as a burden, but a strength. In return, the friend will often wait in a different line to return the favor.

No one knows when a Big Brew will drop until a week or two before it is sold. Some, like Hardywood’s Trickery, drop with regularity (it’s traditionally released on Halloween weekend). Others, like the Vanilla Circle of Wolves, are complete surprises. Social media fuels intense interest and speculation on how good the beer will be in the days leading up to the release. Because the Vanilla Circle of Wolves was a first-time release, to acquire one was also to acquire cachet and a certain amount of bragging rights. A sought-after beer can cost up to $10 more on average – a cost that fans are all too happy to absorb.

Like everyone else in line, Thomas was confident he would achieve his goal. “I was in line here last week to get the double barrel (beer), and I was much further back. But I still got one,” he said.

Closer to the middle of the line, with maybe 60 people in front of her, was Haley Bergh, a 26-year-old pharmacist.

“I got into the trend (of waiting in line) when The Veil opened,” she said. “The first year and a half or so, the lines were crazy no matter what. But it’s always a good time,” she said. “I’ve actually met a lot of people.”

Burgh only gets beer for herself, so she can try it. For The Veil’s first Dark Daze celebration in November 2017, which favors barrel-aged stouts, Bergh and her friend Tim arrived at 8 a.m., four hours before the brewery opened, to ensure they’d get all the bottles they wanted. And they did.

But she still has to strategize.

Fresh out of school, she’s missed a few of the releases because of work. She may start trading to get the bottles she wants.

“Now that The Answer releases crowlers on Tuesdays, you have to decide which release to go to,” she said. “It definitely takes some planning.”

Richmonder Erik White, 46, was only about 30 people away from the front of the line. He enjoys beer for himself, and doesn’t mind waiting for it. “In New York, the lines are a lot longer than this. And RVA is a lot less colder,” he said.

Based on the people White has talked to, the lines on FOMO day contain a healthy number of travelers.

“Many of these people come from out of state,” he said, looking around. “The people who come earlier are usually from somewhere else.”

And not everyone, apparently, will be enjoying the beer they buy.

“A lot of people getting this beer are trading it,” White said. “If it’s sought after enough, you can get whatever you want for it.”

As the doors opened and people eagerly filed in, mere minutes ticked by before the first few headed out, running their bounty to their cars. One of those was Chris Schmidt, 41, of Richmond. He got his full three-bottle allotment of Vanilla Circle of Wolves, as well as his Double Barrel Circle of Wolves bottles last week. He was hoping to get one of the 12 bottles of Coconut Sleeping Forever from the cellar sale. But “I was Number 13 in line,” he said, with a shrug.

He said he primarily goes to The Answer to drink beer, and The Veil to pick up bottles.

“I used to be big in the trading scene, but now I just get them primarily for friends,” he said. “The beer community in Virginia is like a hangout."

He’s waited several times at breweries such as The Answer, Hardywood Park and Brothers Brewing in Harrisonburg for prized barrel-aged stouts. For the latter’s yearly Resolute Day, usually held around mid-November, he takes off Friday from work, leaves at 7 a.m., arrives around 9:30 a.m., then waits and chats with people until he’s given a wristband that guarantees him a beer.

Does he know Tim Cheng, the first person in the line?