Subscribe
Read Today's E-Edition
Share This
The Answer Brewpub and The Veil Brewing Co. have made glassware releases almost as sought after as the beers themselves
0 Comments
Share this
1 of 6 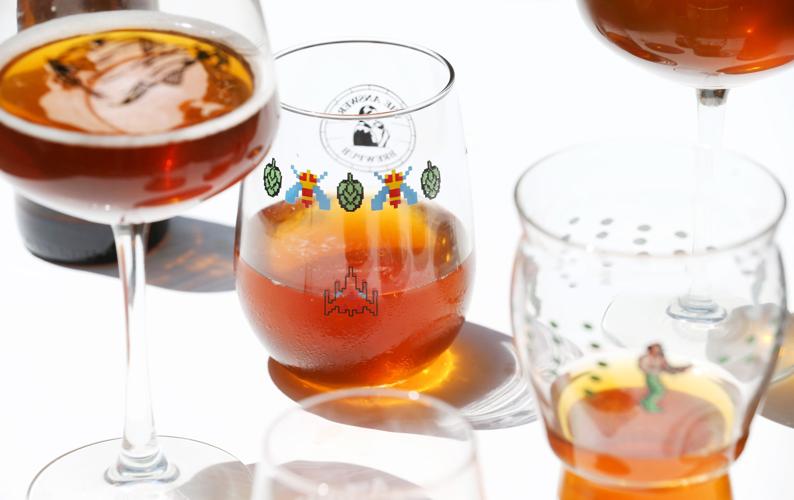 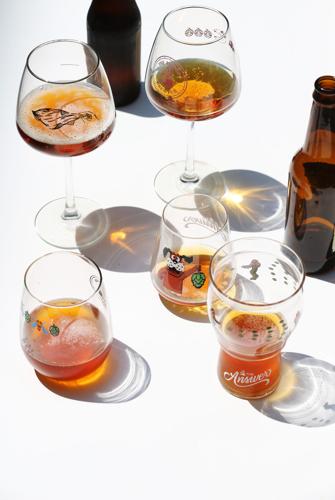 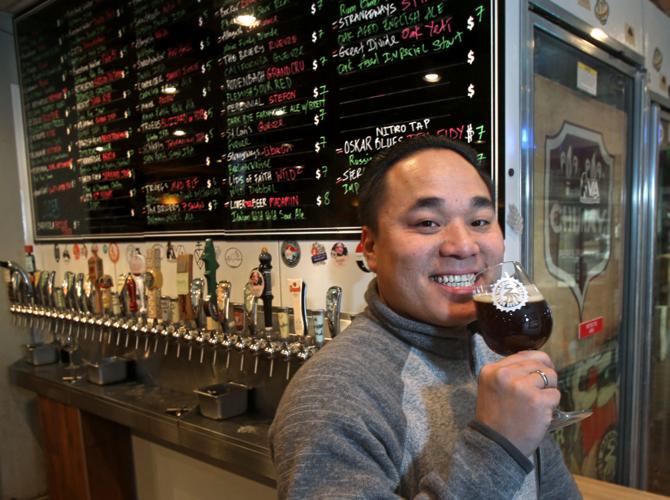 An Bui is owner of Mekong restaurant and The Answer Brewpub. 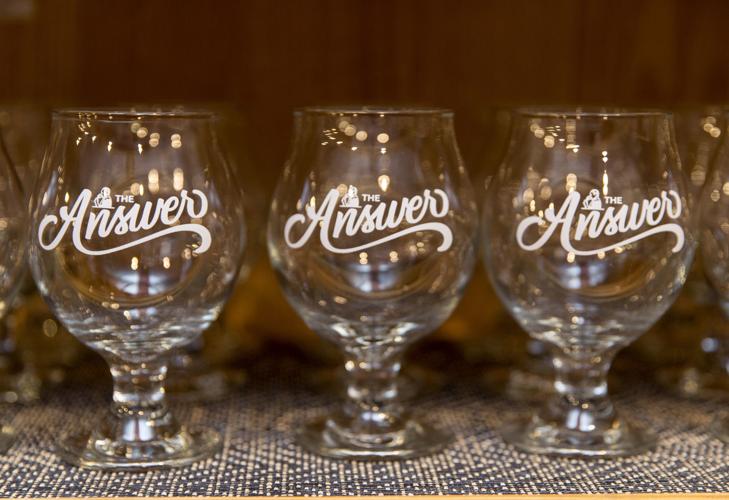 At The Answer Brewpub, An Bui has developed a strong presence in the burgeoning craft brewery scene in Richmond. 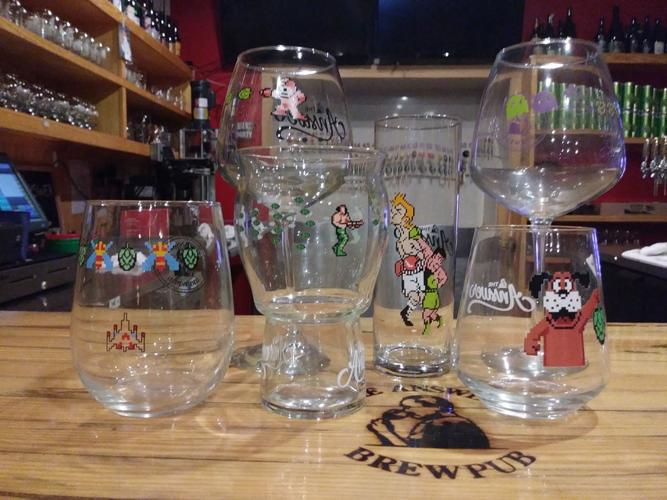 Some of the characters and games on the 8-bit glassware from The Answer Brewpub include (left to right): Galaga, Megawoman, Contra, Glass Joe, Duck Hunt and Ms. Pac Man. All the characters are interacting with a hops plant, a flavoring agent for beer. 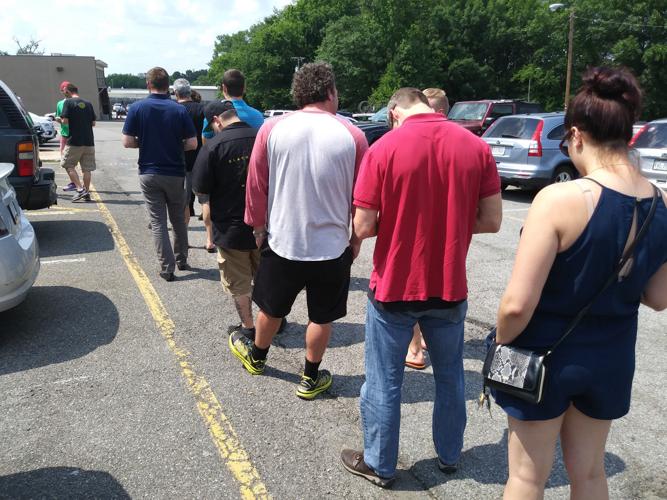 On June 8, people lined up in the parking lot of The Answer Brewpub to pick up tickets to reserve a “Duck Hunt” glass.

In the world of tasty alcoholic libations, wine is often seen as beer’s more sophisticated cousin. But if variety is the spice of life, the reverse is now true. The explosion of beer variations from the last decade has easily surpassed the variety of wines.

The same can be said for the glasses.

Nearly all wine glasses share the same characteristics — a “foot,” which keeps the glass upright; a “stem,” which allows you to carry the glass without warming the wine; and a “bowl,” which tapers upward in a way that captures the wine’s aroma. Beer glasses have close to a dozen major styles, all for the apparent purpose of capturing flavor.

Or maybe it’s simply how cool they look.

“There is something very visually appealing about the shapes, amazing graphics and different sizes,” said Corey Iglesias, a 27-year-old exercise physiologist and glassware enthusiast who lives in Richmond. He estimates that he’s owned about 150 unique beer glasses.

“Each glass has a different memory,” he said. “As we get older, we forget a lot of memories and good times. But a glass, being something tangible, helps bring those amazing times with friends and family back.”

Nearly every brewery in town uses or makes glassware featuring their logo. But only two — The Answer Brewpub and The Veil Brewing Co. — have made glassware releases almost as sought after as the beers themselves.

Members on social media sites devote entire groups to what they have coined “proper” glassware (or the lesser used term “glass whales”); many will trade rare, highly prized beer for the chance to snag a favorite. Unlike seasonal beers, unique glasses are released only once — so the secondary market value for anyone who misses the release can be high.

Acquiring glassware is similar to buying a jersey of your favorite player’s sports team: It shows one’s approval for a brewery or beer in a novel way. While capturing the subtle aromas and flavors of a well-made craft beer is the official reason for different types of glasses, the greater appeal may lie in the cachet of ownership. Glasses can become a must-have item in several ways: clever designs built on wordplay (the Veil’s popular “Veilian” flying saucer glass); commemorative nostalgia (brewery anniversary celebration glasses); or rarity (opening day glasses for then-unknown brewers who eventually hit it big). Many, such as Hardywood Park’s stout glasses, mirror the loyalty toward certain beers.

They can also be used to honor a colleague: About a year ago, The Veil released a glass honoring a friend named Henry, a brewer at Monkish Brewing Co. located across the country in Torrance, Calif. The stemmed glass features dozens of tiny, round, multicolored faces of Henry near the rim. To own one was not only to support The Veil, but the then-more established brewery Monkish. (The glass sold quicker than much of the beer did.)

For much of its three-and-a-half year history, The Answer has appealed to Generation X beer drinkers by releasing what’s been affectionately dubbed as “8 bit glassware” that showcase classic video games with a picture of hops incorporated somewhere in the design. Some, like the “Mega Man” glass, are extremely rare; while others number in the hundreds or thousands. As a sign of appreciation for its customers, The Answer has given away two different 8-bit glasses in the last few months.

Released in a wide variety of styles, the glasses cost $15 on average and are usually gone within days, sparking brief trade wars on online forums (and a few ridiculously inflated asking prices). To keep sales orderly, The Answer hands out tickets to guarantee a glass an hour or two before they are sold.

The Answer’s owner, An Bui, came up with the idea (although others have used the idea independently in other cities). Bui works with a company called Black Ninja Design to create the artwork, based primarily on suggestions submitted on social media by patrons. Three new 8-bit glasses are in development, with more to follow for the brewery’s anniversary in September. The computer-generated mockups released online are sometimes real, sometimes not; which often generates a healthy debate on which ones will get made.

Ultimately, though, the Richmond beer scene is about just that: amazing beer. So pour yourself a cold one, raise a glass and make a toast to the area’s immense creativity. Whether the glass you use is “proper,” of course, is up to you.

A touch of glass

Flute glass: This glass has a long, champagne-like body, which ensures that carbonation in a beer doesn't escape too quickly. Recommended for American wild ales, Czech pilsners, and certain lambics and lagers.

Goblet: This style has a wide rim, and can be delicate or bulky (the latter are known as chalices). Striking to look at, they help maintain a frothy head on the top of the beer. Recommended for a wide range of American, English and German lagers and ales.

Pint glass: Popular in British and American pubs, the glass, nearly cylindrical in shape, tapers slightly outward to the top. Inexpensive to make and easy to store, they are also easy to grip. Recommended for typical pub beers, including pale ales, porters, thick stouts, and black and tans (a mix of light and dark beer).

Snifter: Similar to a brandy or cognac glass, it has a short stem and a round bowl that help capture the aroma of stronger beers. Recommended for barleywines, double IPAs, imperial stouts and lambics.

Stange: Shaped like a tall, slender cylinder, this traditionally German glass is meant to enhance the malt and hops in more delicate beers. Recommended for altbiers, bocks, goses, kolsches, lambics and rauchbiers.

Teku: Developed in Italy by a brewer and a sensory analyst, the name is an appreviation of the names of the creators. The glass has a long stem and a diamond-shaped body, which releases a beer's aroma from the outward curve of the glass. There are no definitive thoughts on which beer is best for a teku, although some suggest lighter beers, such as sours.

The food and drink folks at Thrillist.com assembled "a crack team of experts" to find the best craft brewery in every state - and it should co…

An Bui is owner of Mekong restaurant and The Answer Brewpub.

At The Answer Brewpub, An Bui has developed a strong presence in the burgeoning craft brewery scene in Richmond.

Some of the characters and games on the 8-bit glassware from The Answer Brewpub include (left to right): Galaga, Megawoman, Contra, Glass Joe, Duck Hunt and Ms. Pac Man. All the characters are interacting with a hops plant, a flavoring agent for beer.

On June 8, people lined up in the parking lot of The Answer Brewpub to pick up tickets to reserve a “Duck Hunt” glass.