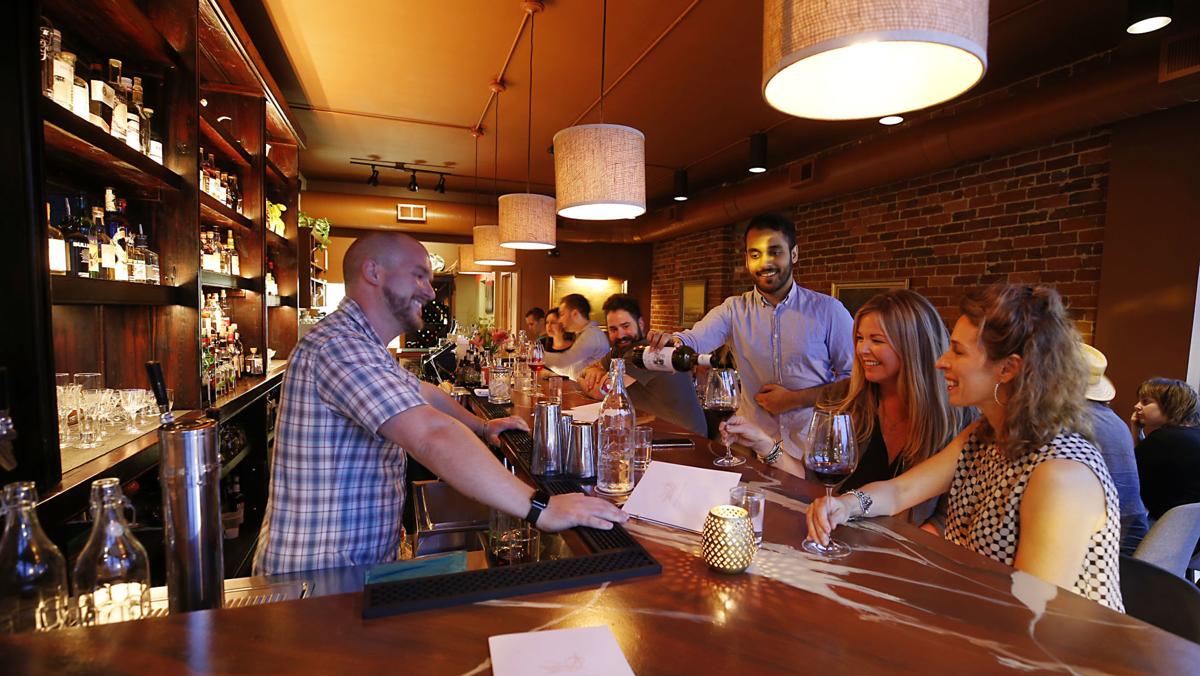 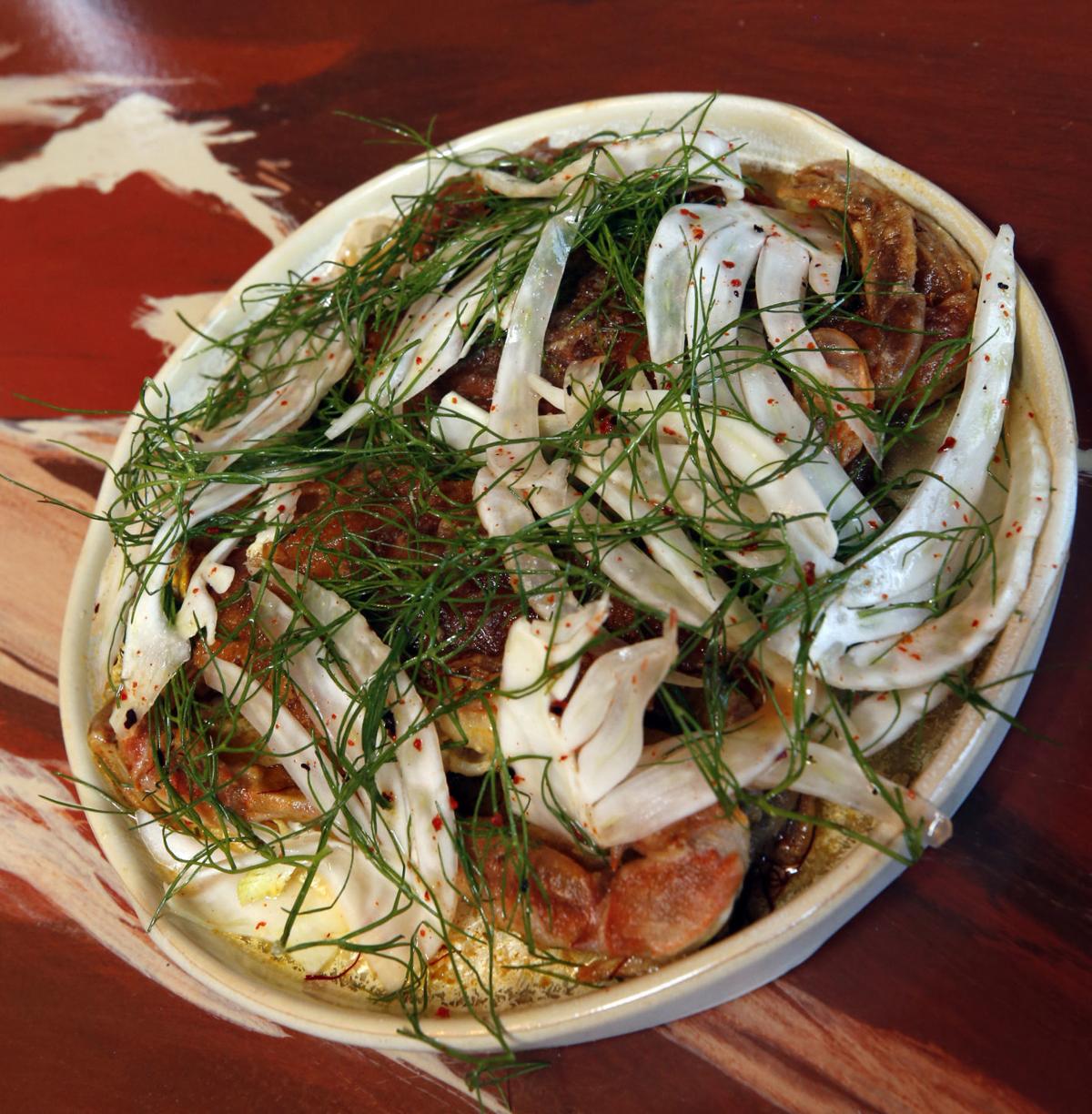 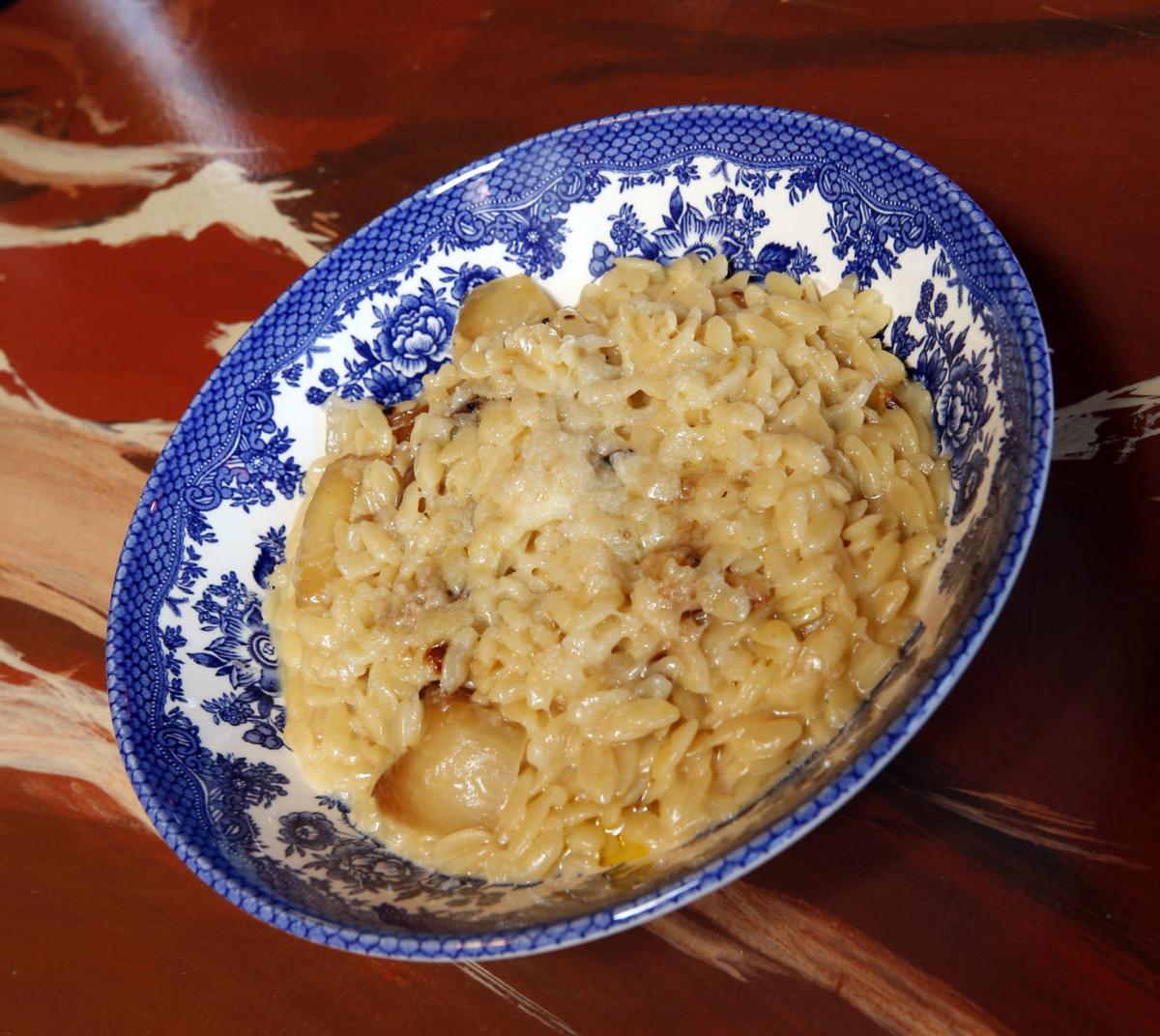 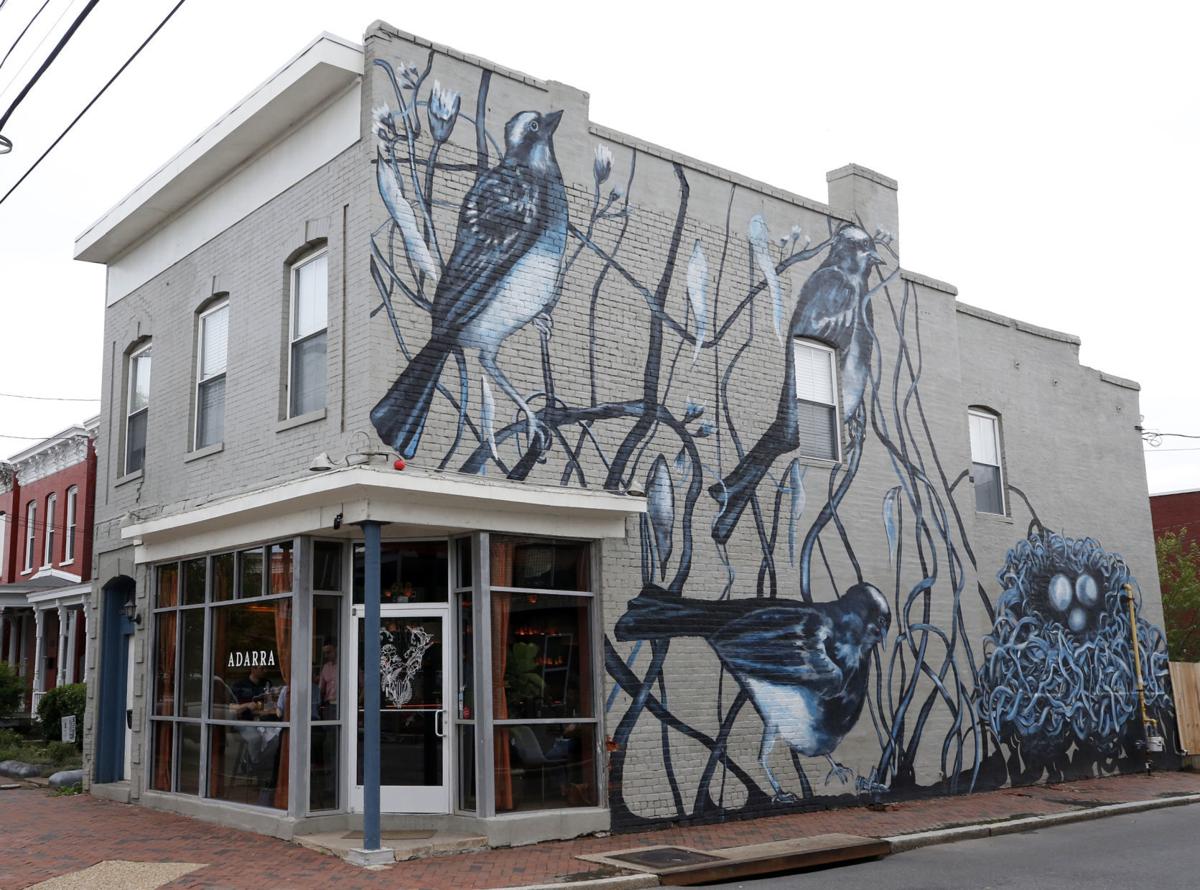 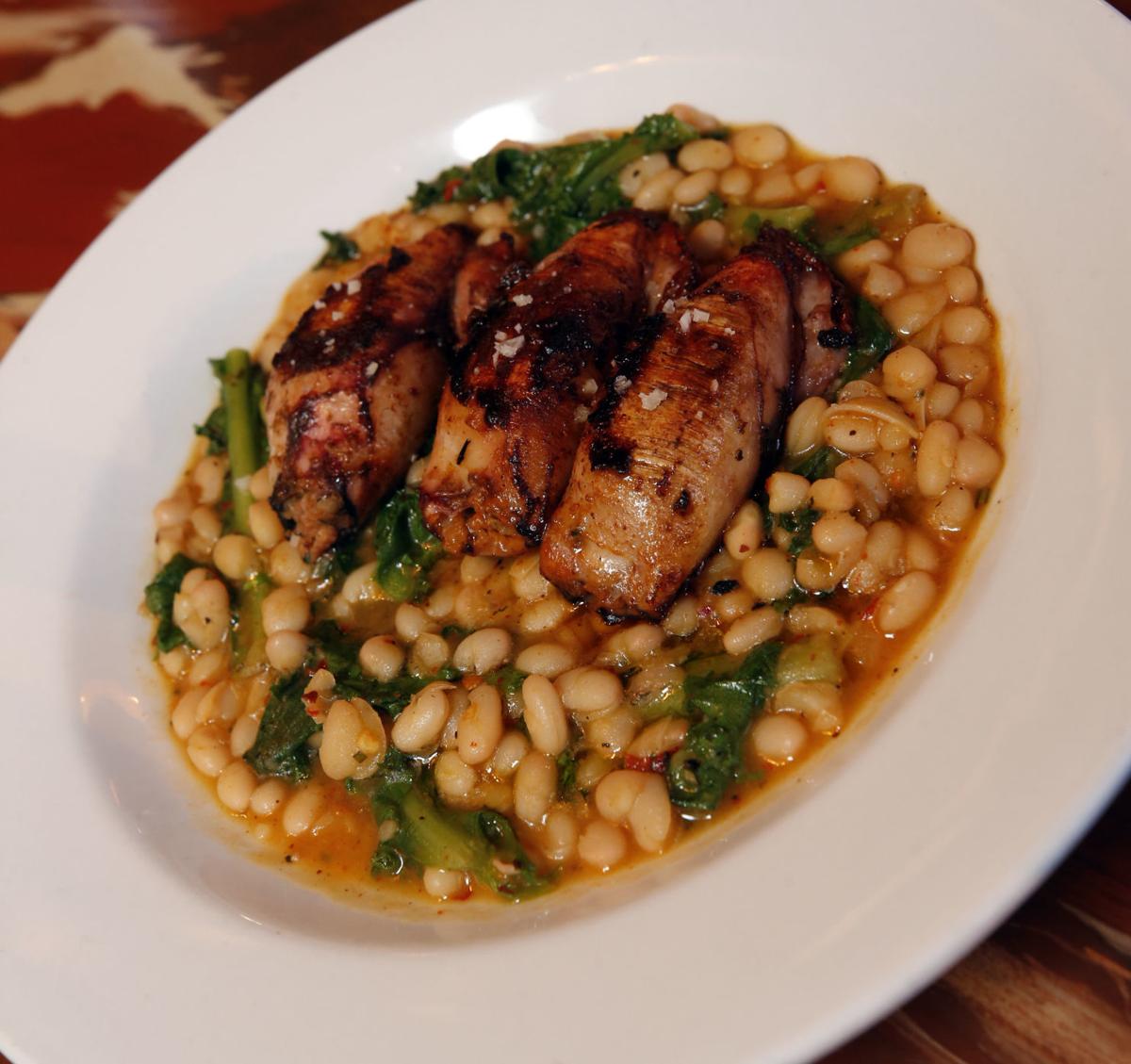 Adarra, named for a mountain in the Basque province of Gipuzkoa in Spain, pays tribute to the region’s food sensibili-ties with dishes such as stuffed squid (clockwise, top left), slow-cooked rabbit leg, octopus stew and soft-shell crab. 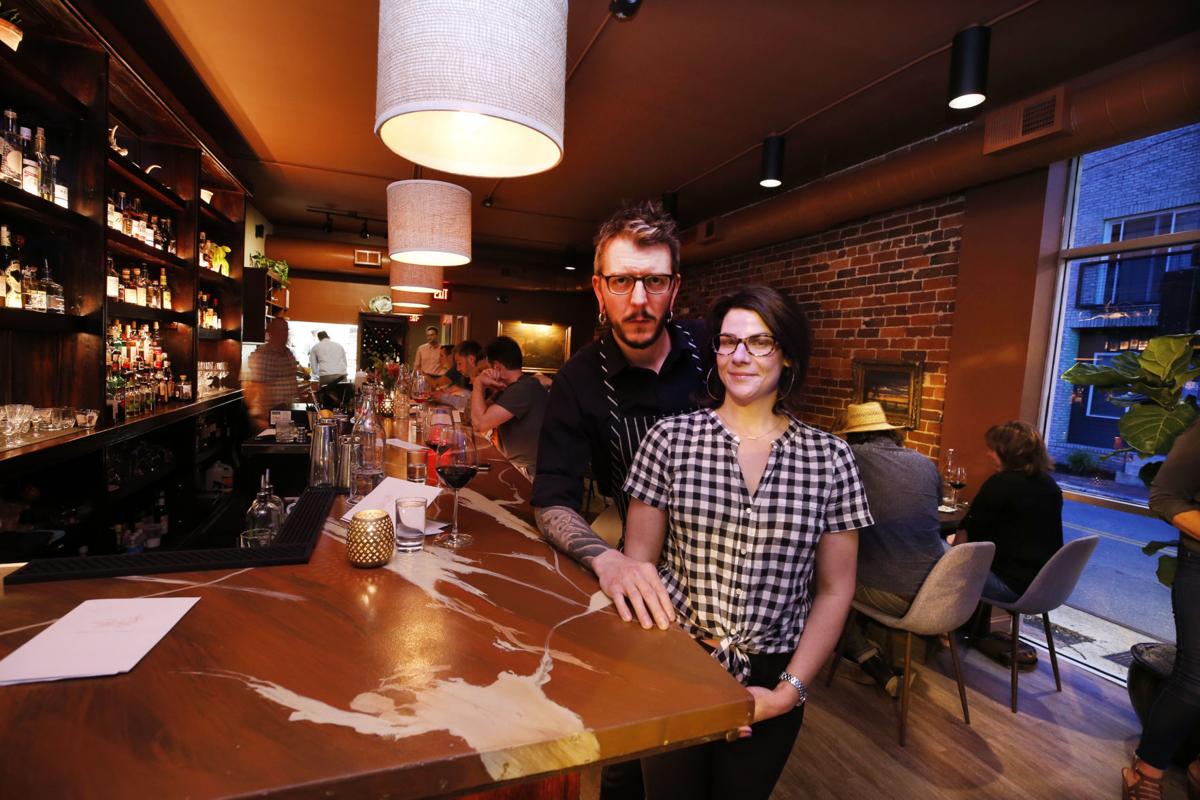 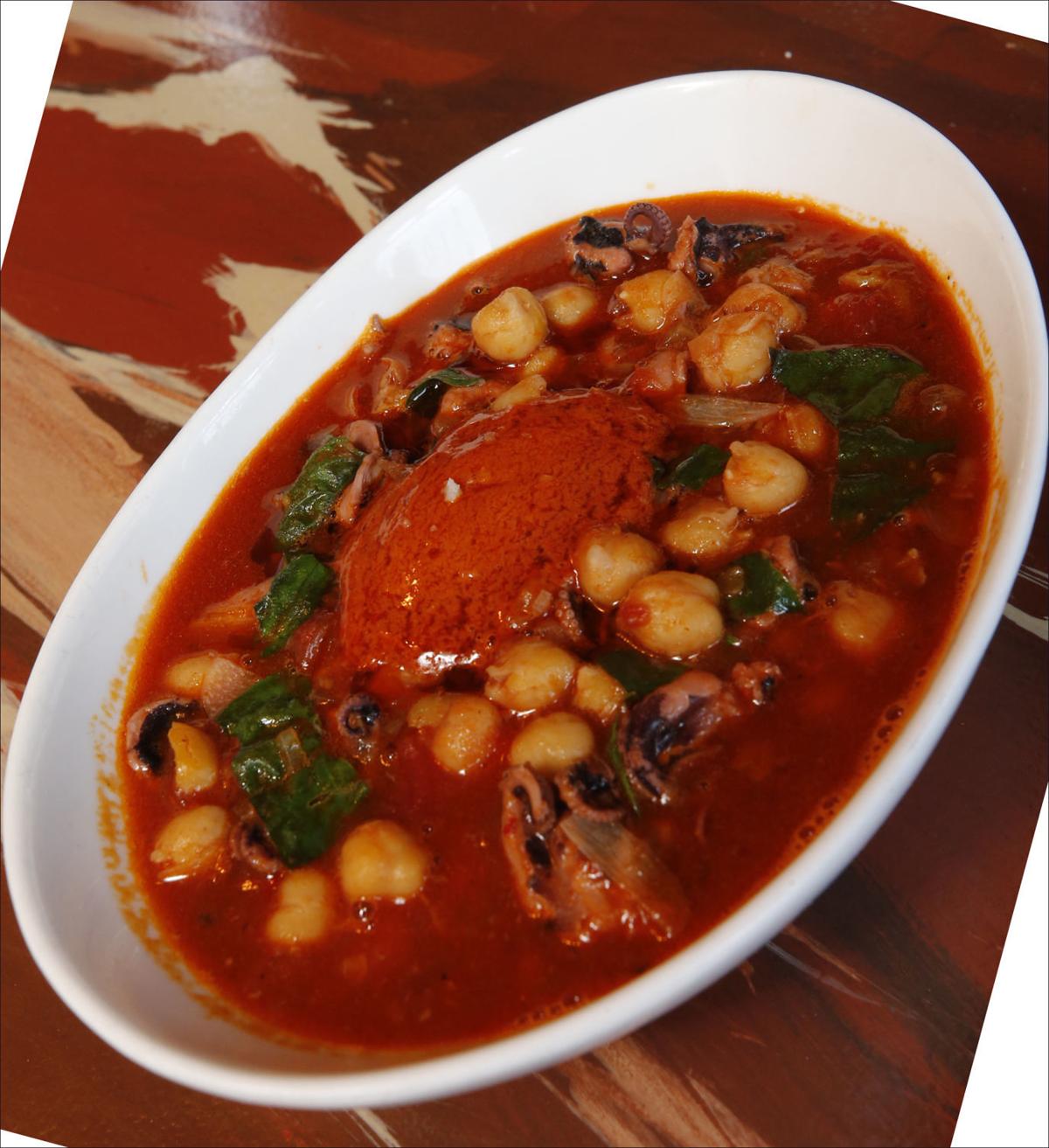 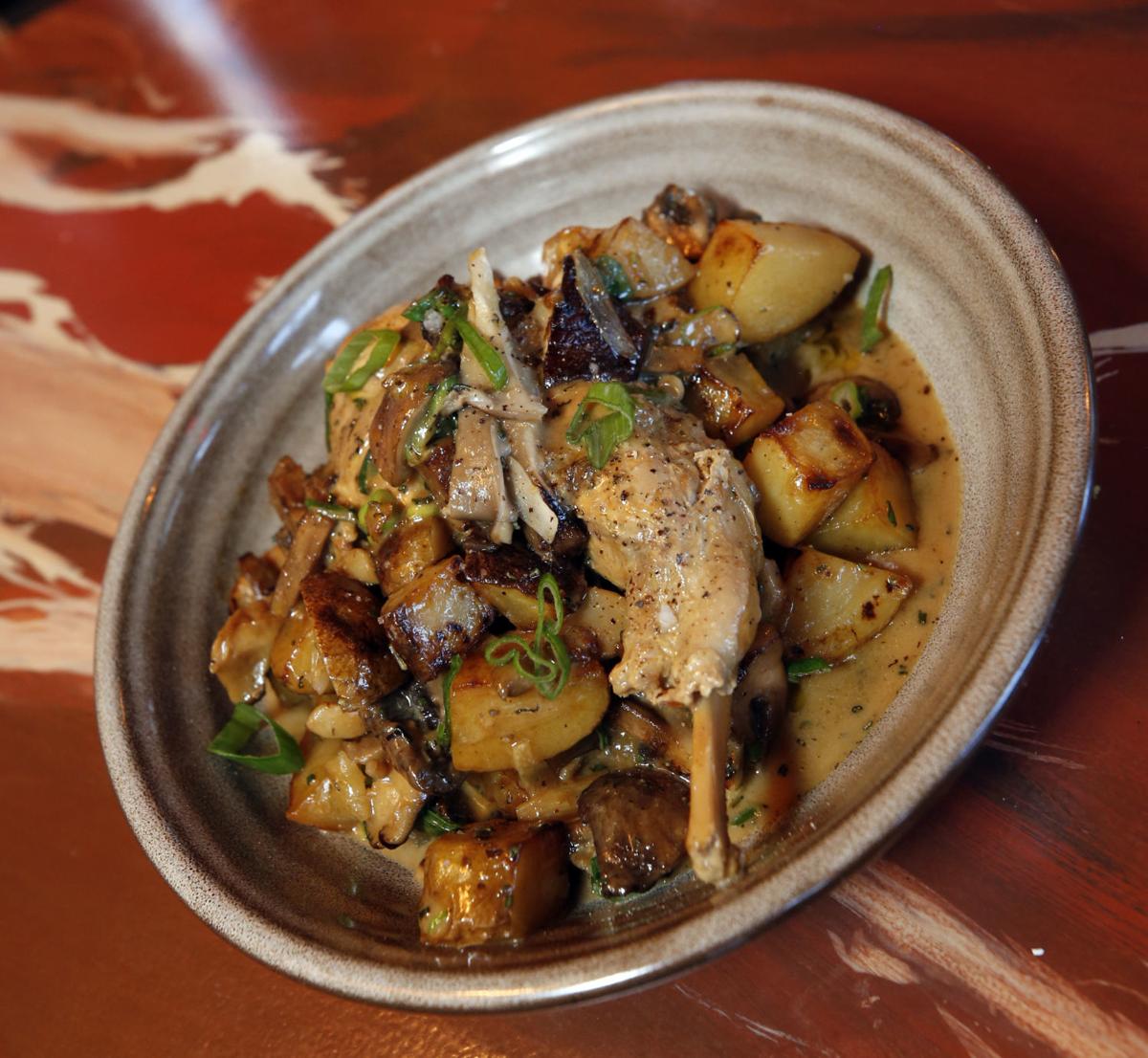 The essence of Basque cuisine, as one writer puts it, is “a simplicity befitting a noble landscape.” In adhering to this philosophy at Adarra, their new Basque-inspired restaurant in Jackson Ward, Randall and Lyne Doetzer paint a stunning portrait of the natural world, with the restaurant’s design, wine list and menu as their canvas.

The space itself has been transformed by a palette of forest green, sunset orange and red river rock, accented by dark-wood finishes. If Adarra’s naturalistic theme isn’t obvious enough, on the wall hang gold-framed paintings of lush forestscapes and pastoral fields.

The restaurant’s selection of natural organic wines has been thoughtfully curated to highlight the rugged and unvarnished aspects of their terroir — ranging from tart-briny rosés (Antxiola “Getariajo Txakolina,” $11/glass) to sultry-smoky reds (Viña Laurent “Inocente,” $11/glass).

The name, “Adarra,” refers to a mountain in the Basque province of Gipuzkoa in Spain, near southwestern France. As a tribute to this region, Randall Doetzer’s menu conveys the sensibilities of Gipuzkoan cooking, which, like all Basque cuisine, is heavily influenced by the land.

This means lighter fare with a hybrid of Spanish and French influences. It also means food that tastes as if it’s been seasoned by the natural flavors of the ingredients inherent in every dish. Salty, the usual MVP of flavor, is secondary to other intrinsic flavors, such as tart, smoky and sweet, that the restaurant’s dishes successfully evoke.

The caracoles ($14), a Basque-style snail dish, trades the richness of melted butter in French escargot for the brightness of a lemony broth, with slivers of green garlic, complementing the earthier flavors of the snails whose dark and curly bodies bob around in the broth.

The cold misting of a smoking gun imparts the taste of barbecued meat to the venison tartare ($15), which nonetheless retains its raw sweetness. These flavors are accentuated by the vegetal flavors of salt capers in the tartare and a mosaic of raw mushrooms and pickled shallots and drizzle of olive oil over top.

Toffee-colored grains of orzo ($13) are infused with a funky and richly nutty Idiazabal cheese to achieve a sumptuous risottolike consistency. Scales of onion, roasted until they’re invertebrate and caramelly sweet, are folded into the pasta.

The soft-shell crabs ($28), now in season, are exquisite. Their molted bodies, swollen with mustard-colored crab innards, are simply sautéed to a reddish-brown hue. Dressed only by a blanket of pickled fennel and fennel fronds and perched atop a layer of saffron-infused butter, the crabs’ briny-sweet flavors shine.

The best dishes are the octopus stew ($17) and the stuffed squid ($17). In terms of flavor and texture, they couldn’t be more different. The octopus stew is fiery red with a depth of flavor resembling a sort of paprika-laden kimchi jjigae. Swimming amid the sea of red are baby octopus, their pod-shaped bodies as creamy and supple as the stewed chickpeas in this dish. Rounding out the dish is a deep orange streak of aioli resembling the rouille that traditionally accompanies a French bouillabaisse.

The stuffed squid, meanwhile, have such a delectably smoky flavor you can smell it rising off their leathery charred-black, bruised-purple exteriors. Stuffed into these taut coin purse-shaped squid bodies is more squid, blended into a smooth mixture that tastes like spicy chorizo. A plush bed of white beans completes this dish.

If cephalopods aren’t your thing, try the slow-cooked rabbit leg ($26). Its obligingly tender musculature is accompanied by a white cream sauce, replete with mushrooms and green garlic, evoking a lighter version of French coq au vin. Notes of saffron and other flavors in this dish seem to evolve as you eat it.

Though I almost never find a restaurant’s front-of-the-house activities notable enough to mention, Lyne Doetzer has turned them from an obligatory task into an elevated art form. Guests are greeted by name. Wines and dishes are described with poeticism and polish. And the service is warm and engaging.

Most great restaurants succeed in capturing a perspective that’s creative and interesting. But hardly ever do they make me feel as if I’m experiencing the world again for the first time. Adarra is the rare exception. Through the lens of Basque cuisine, the perspective it captures is dazzlingly original and truly extraordinary. The restaurant is a masterpiece.

Ideal for:  Some original perspective captured through the lens of Basque cuisine

Noise level:  Comfortable to moderate during the weekend

Best seat in the house:  Seats at the bar or outside on the dog-friendly patio

Parking:  No, street parking only

Esquire magazine has put its annual best new restaurants in America report and Restaurant Adarra in Jackson Ward made the list.

Adarra, named for a mountain in the Basque province of Gipuzkoa in Spain, pays tribute to the region’s food sensibili-ties with dishes such as stuffed squid (clockwise, top left), slow-cooked rabbit leg, octopus stew and soft-shell crab.