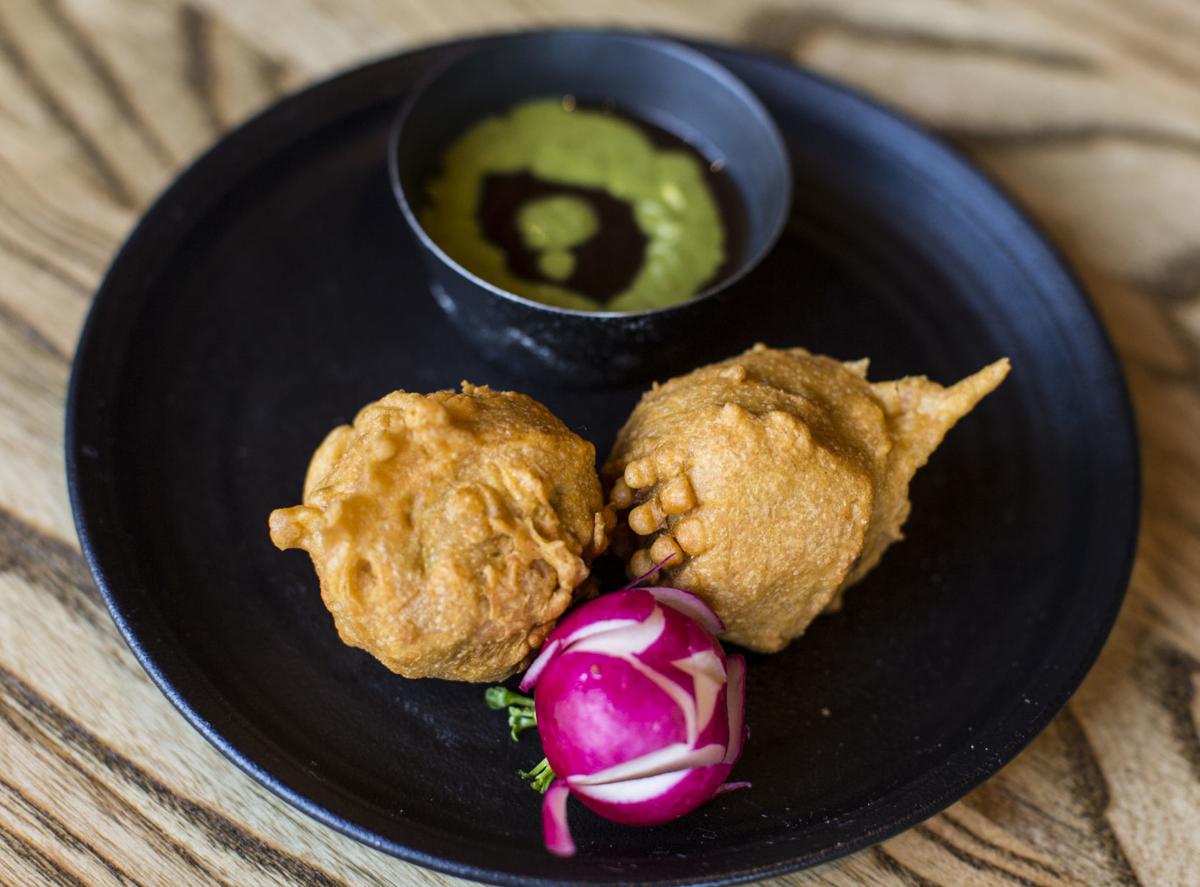 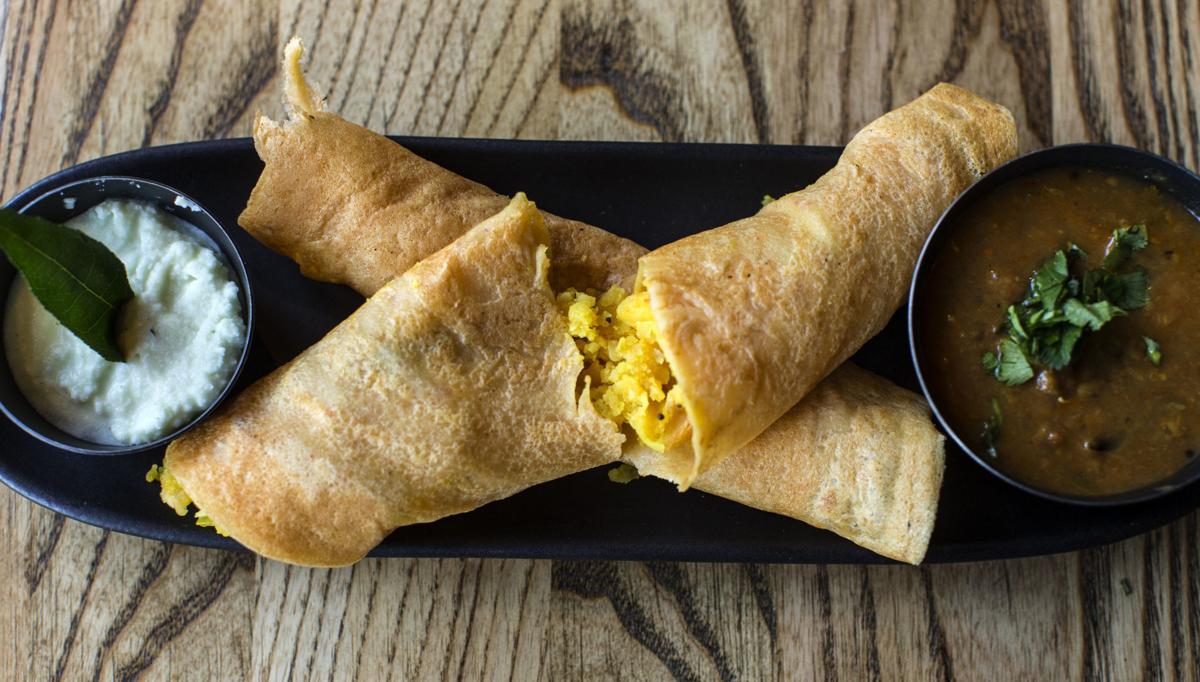 The dosa at Nama, ground-lentil crepes filled with blended potatoes, is an intriguing take. 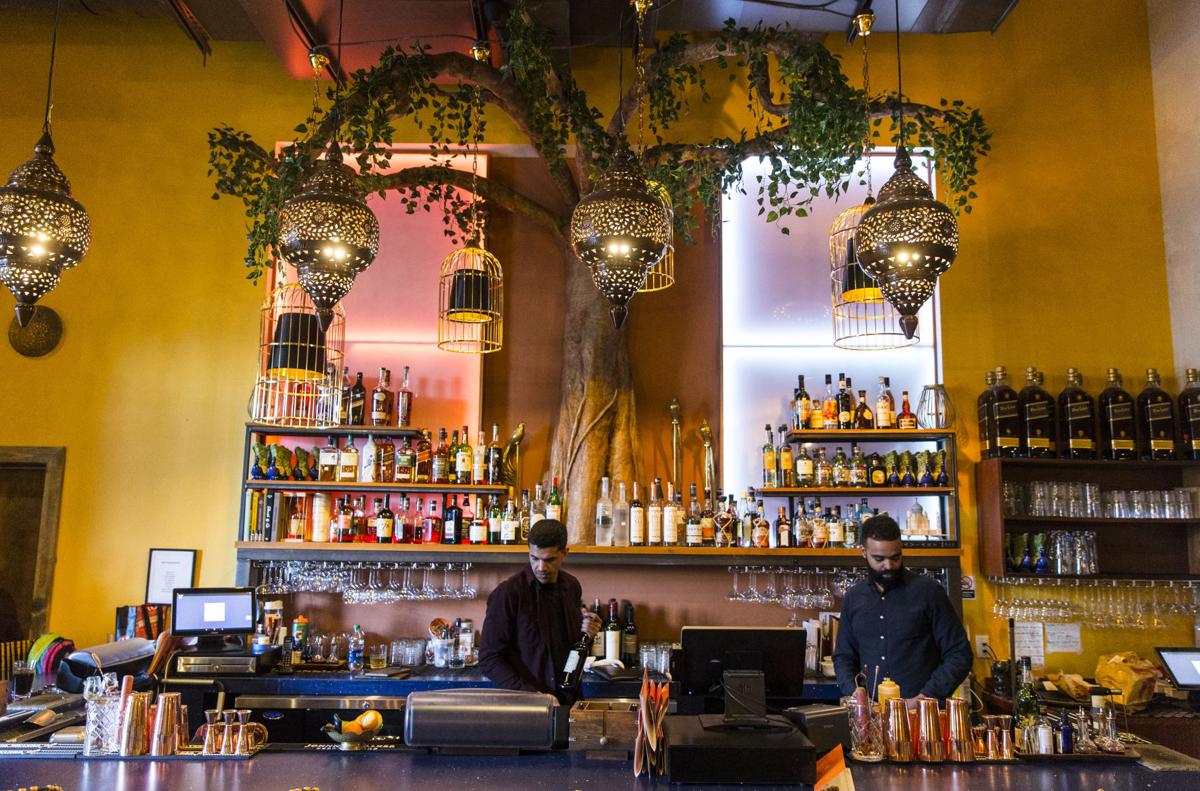 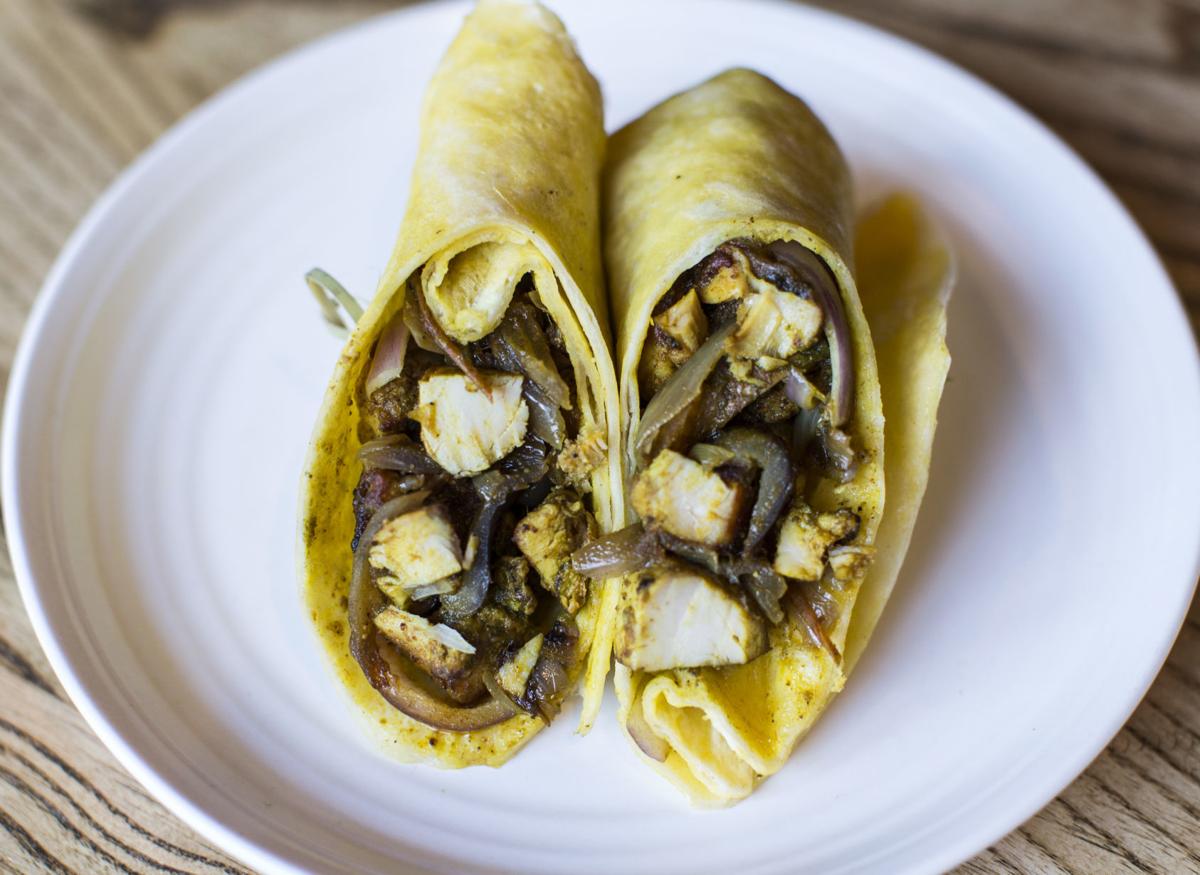 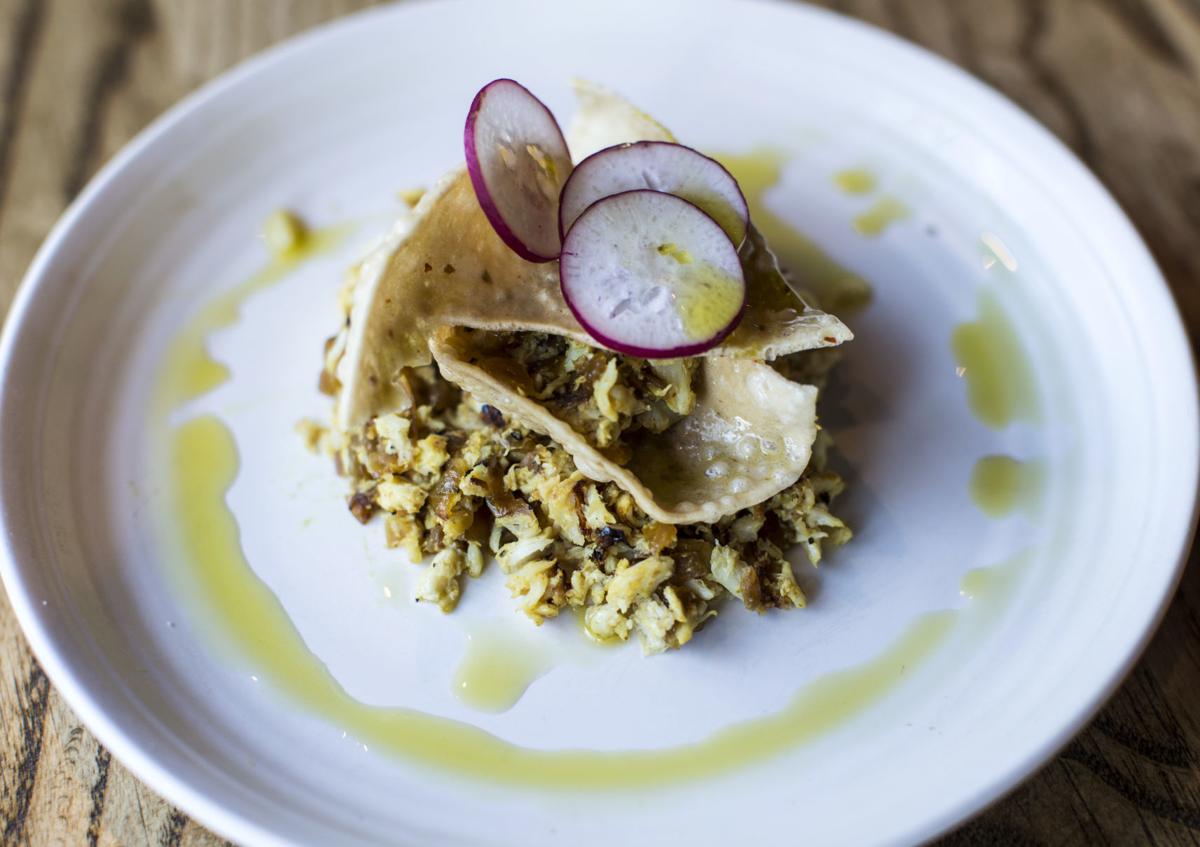 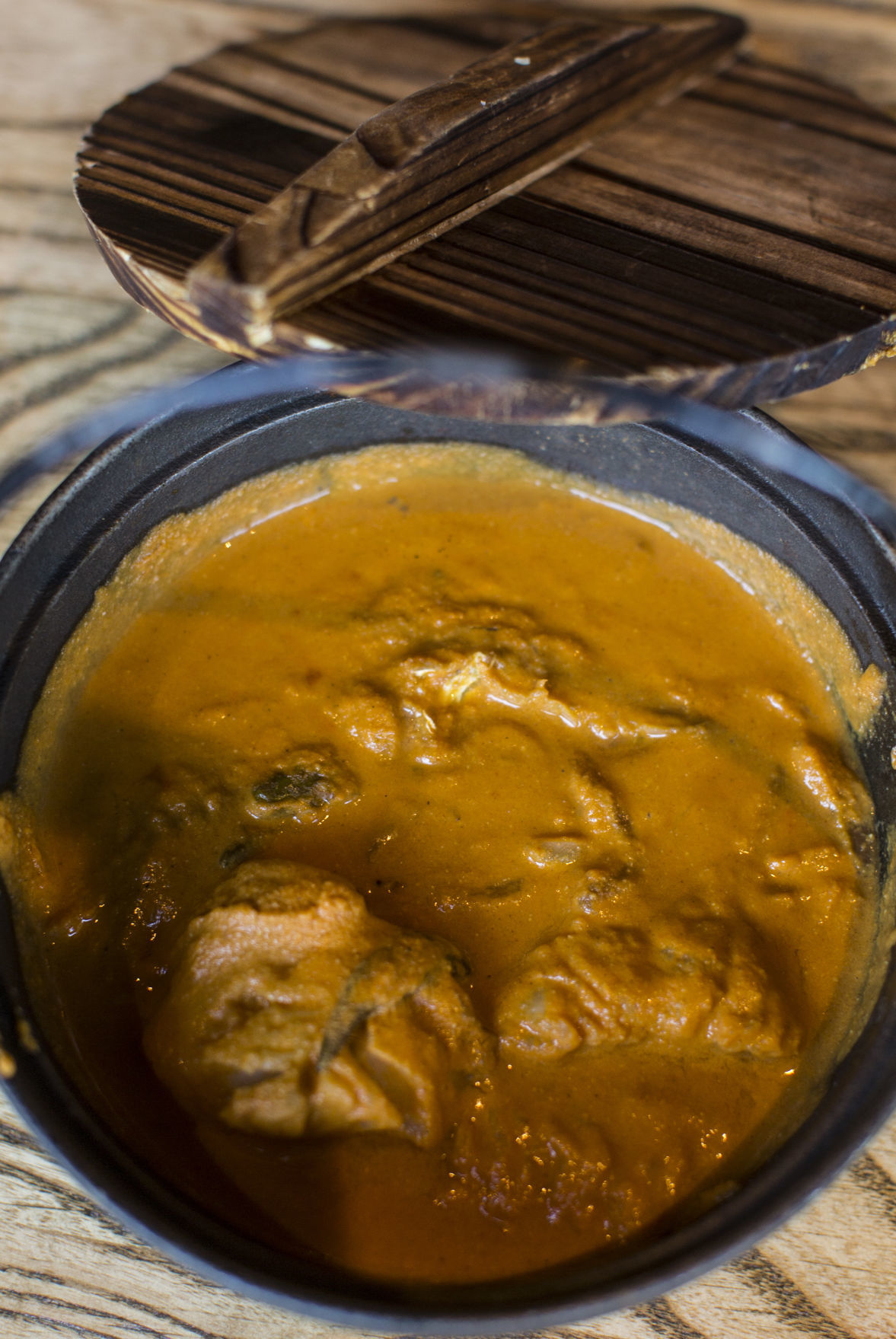 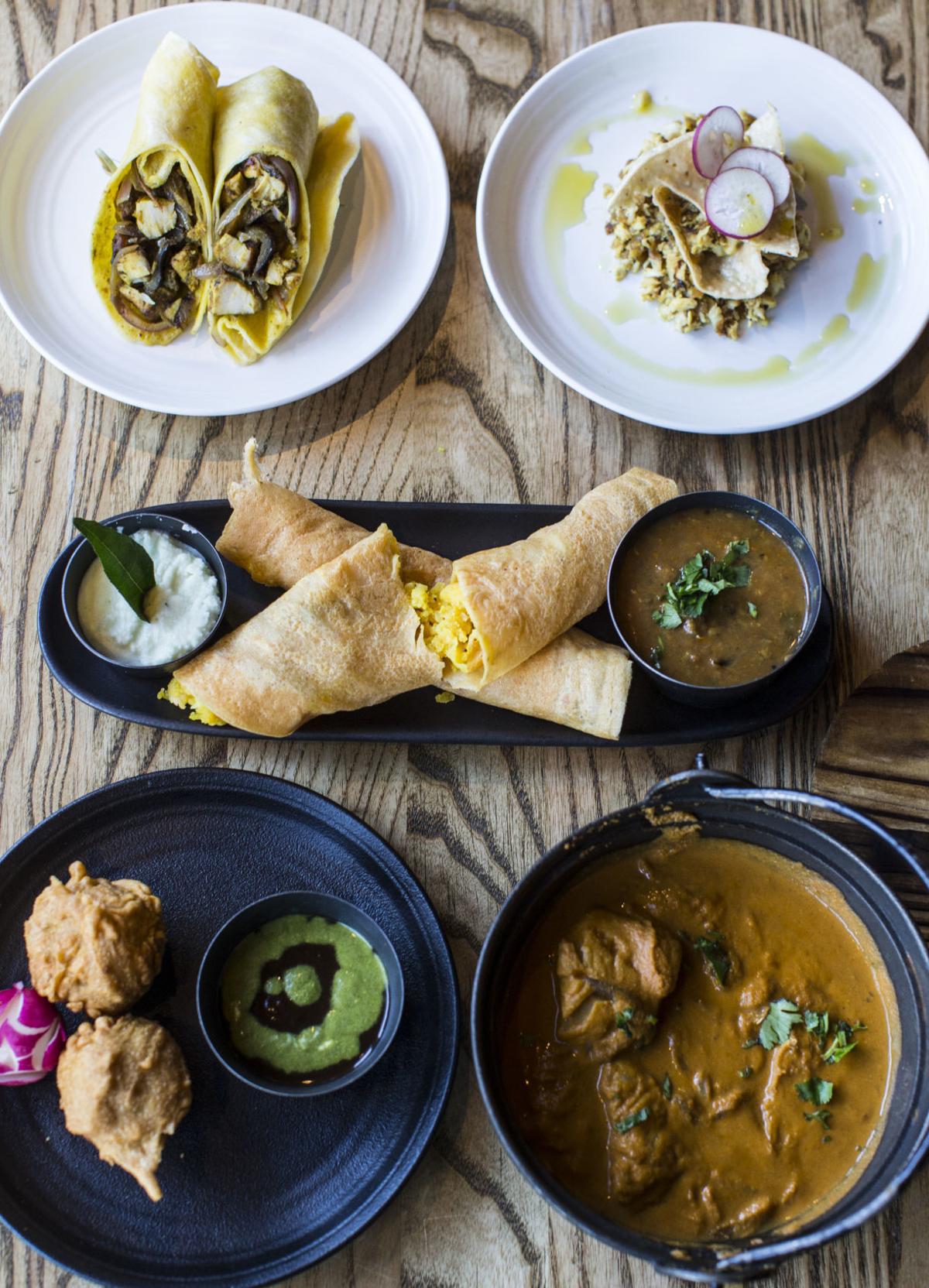 Nama, a design-driven Indian restaurant in the heart of downtown Richmond, feels like a storybook garden conjured right out of the pages of “One Thousand and One Nights.” Near the entrance there’s an enchanting nook lined with porch swings. A life-like banyan tree stands with its noble arms outstretched behind the bar. Moroccan-style pendant lamps hang from the branches, casting a hypnotic glow on bargoers beneath.

I’d expect nothing less. After all, Nama’s owners, LX Group — the same “restaurant-ainers” that brought us Kabana rooftop and Switch Pop-Up Bar — know a thing about spectacle. But how would their tactics translate into food that’s capable of dazzling both visually and culinarily? The answer, it turns out, is pretty successfully. Thanks to chef Ramesh Kaundal, who once cooked at D.C.’s famous Bombay Club, and co-chef Madhu Bhargava, the kitchen imparts some of that same magic in its dishes.

Nama doesn’t purport to draw strict geographical lines with its menu. Rather, it encourages Richmond diners to try a pan-regional assortment of north and south Indian dishes, with much of the menu dedicated to popular street foods and snacks. Interestingly, though chefs Kaundal and Bhargava both originally hail from north India, the most spectacular dishes happen to be the ones that capture south India’s lighter, spicier sensibilities.

Of the small plates, I couldn’t help but marvel at the sleight of hand that gave such deceptively big flavors to the masala crab ($15), a dish you’d find in seafood-rich parts of coastal south and central India. Even the daintiest bite felt much larger than it was. Crowned with savory rice crackers were briny shards of blue crab in alternating tiers. Each layer of crab wore an intensely dry-spicy perfume of curry leaf oil, mustard seeds and cracked pepper. Caramelized onions incorporated into this dish flirted ever so sweetly with the crab.

The potato bhonda ($7), another south Indian specialty, performed a similar feat. Though heavy in your hand, these fried, besan chickpea flour-battered balls, plush with turmeric-spiced potatoes, were virtually weightless in your mouth.

While lacking those shatteringly crisp edges of a traditional dosa, one of the few south Indian dishes that’s gained popularity stateside, Nama’s dosa ($11) — spongy scrolls of ground-lentil crepes coiled around softly blended potatoes — was nonetheless intriguing. The potato mixture, churning with a potent concoction of curry leaves, mustard seeds, ginger and other spices, left my cheeks mysteriously warm and tingly. A yin-and-yang of sauces — a cool tradewind of coconut chutney and warm sambar of asafetida, fenugreek seeds and other spices — accentuated this dish.

The north Indian bites on Nama’s menu were more of a mixed bag. My least favorite among them was the garlic naan ($3). The bread had gone so stiff that no amount of clarified butter could possibly bring it back to life.

I wasn’t exactly smitten with the papri chaat ($7), either. Unlike with other iterations of this sweet-savory north Indian snack I’d once had cravings for, I didn’t come to develop those same feelings for the one at Nama. Thrown together in Pollockian fashion were strips of fried papri, whorls of yogurt and tamarind and coriander chutneys, chickpeas and boiled potatoes, musket balls of puffed rice, and fresh tomatoes and red onions. Though this potpourri of ingredients had a lot of interesting parts, the whole was somewhat less interesting than the sum of those parts. And the flavors came across as more messy than tasteful.

On the other hand, the khati roll ($11), a popular street snack of north Indian origin, managed to capture my heart, even though Nama’s wasn’t as indulgently greasy as others. This, I’d later learn, was because, instead of using a traditional paratha, the restaurant decided to add a little twist, by using a tortilla dipped in egg. Its version, a portly bundle of chicken tikka, still packed an unexpected wallop of flavor, thanks to some gravy rich with yogurt, garlic and spices, such as coriander, turmeric and garam masala.

The restaurant’s south Indian-inspired large plates were just as spectacular. Fish curry from southern Kerala ($22) came in a miniature cauldron bubbling with a fiery orange brew. The curry was laced with cocum, Kashmiri red chiles, tamarind, tomatoes, curry leaves and other spices. Its vivid flavors revealed themselves to you over time, and its sinister, sweat-inducing heat slowly unfolded on your tongue, leaving you huffing like a fire-breathing dragon. As if unable to withstand the punishing heat, the velvety haddock practically melted in submission into the curry.

Though biryani can be found all over India, south India, particularly Hyderabad, is most known for this dish. And Nama’s version ($15), with its layering of components during the cooking process and brawny spices that muscled their way into the foreground, felt distinctly southern. A mix of tomatoes, onions and chiles was nested in scattered grains of long, slender basmati, kissed with aromatic saffron, cardamom and cinnamon. The texture and flavor of this dish triggered memories of Singapore-style curry rice noodles.

If you ask me, it’s just as well that Nama’s forte is its south Indian dishes. We need more south Indian food in this country. And what better way to immerse ourselves in this cuisine and refine our understanding of what too often gets lumped into the same general category of “Indian” food than with a wondrously curated menu in a wondrously curated space like Nama’s?

Vibe: an enchanted storybook garden, complete with a banyan tree and porch swings

Service: above-average; servers exhibit a true spirit of teamwork that contributes to the service being nearly seamless from start to finish

Best seat in the house: group table set inside a magnificent built-in nook with silk-lined walls

The dosa at Nama, ground-lentil crepes filled with blended potatoes, is an intriguing take.