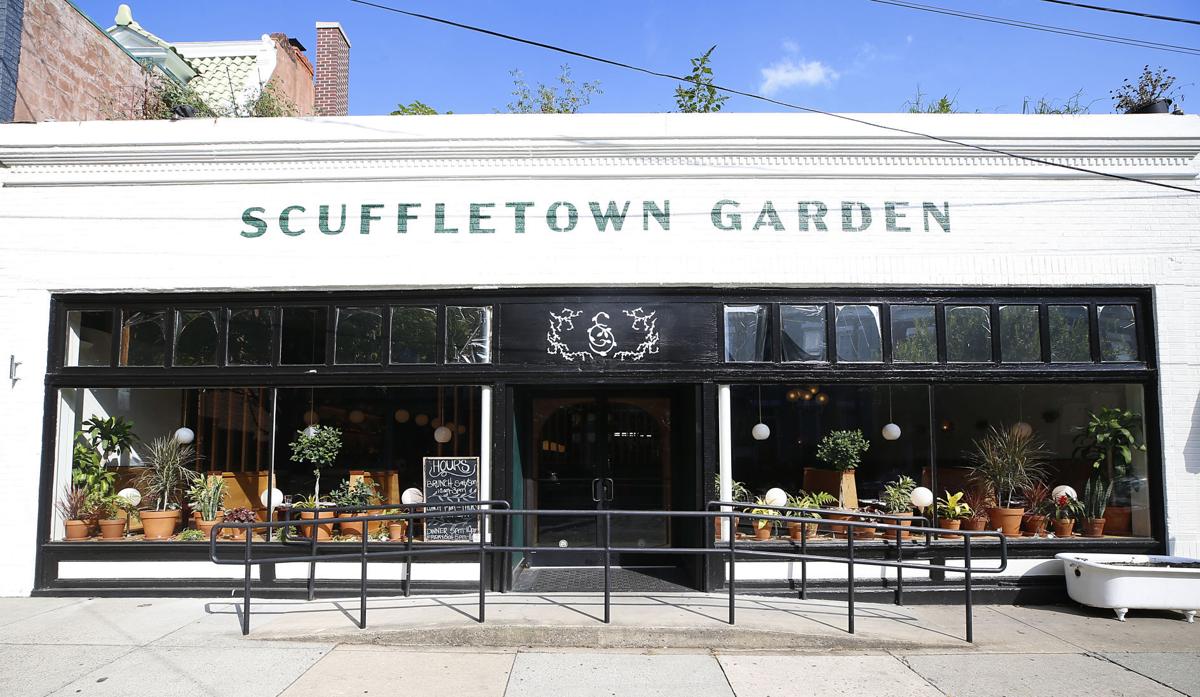 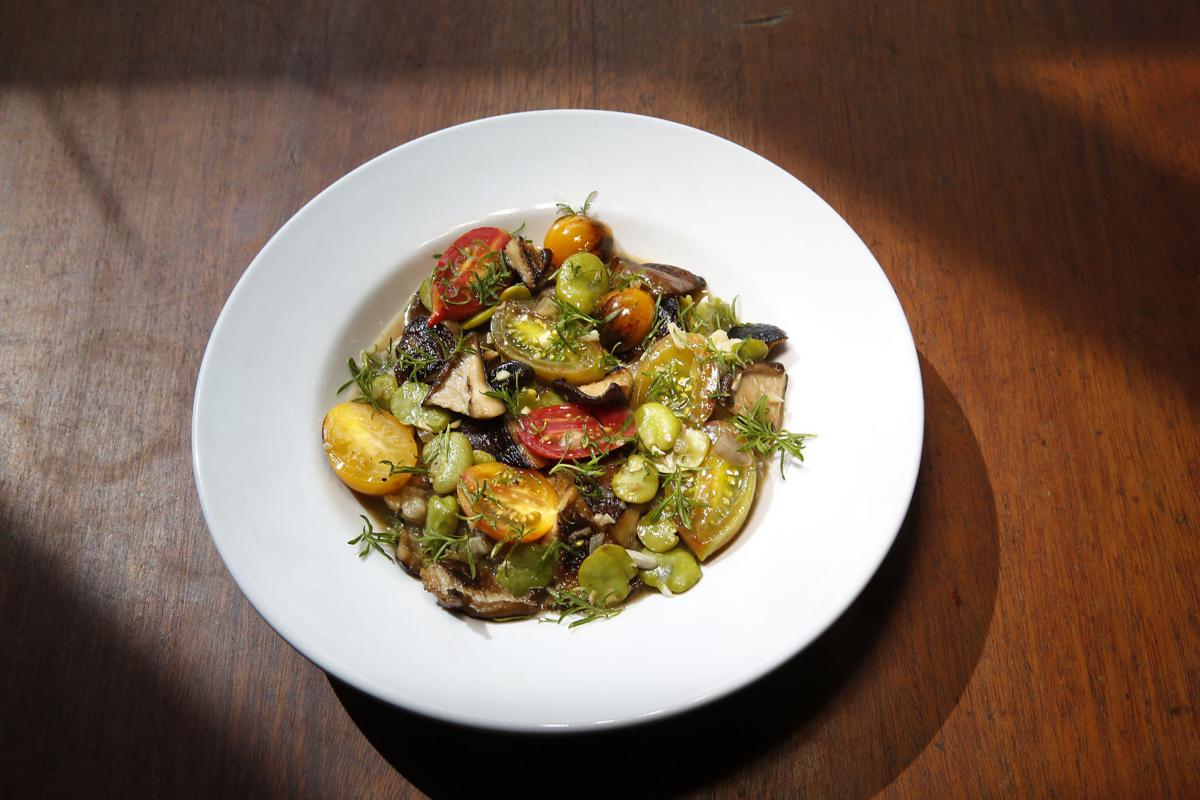 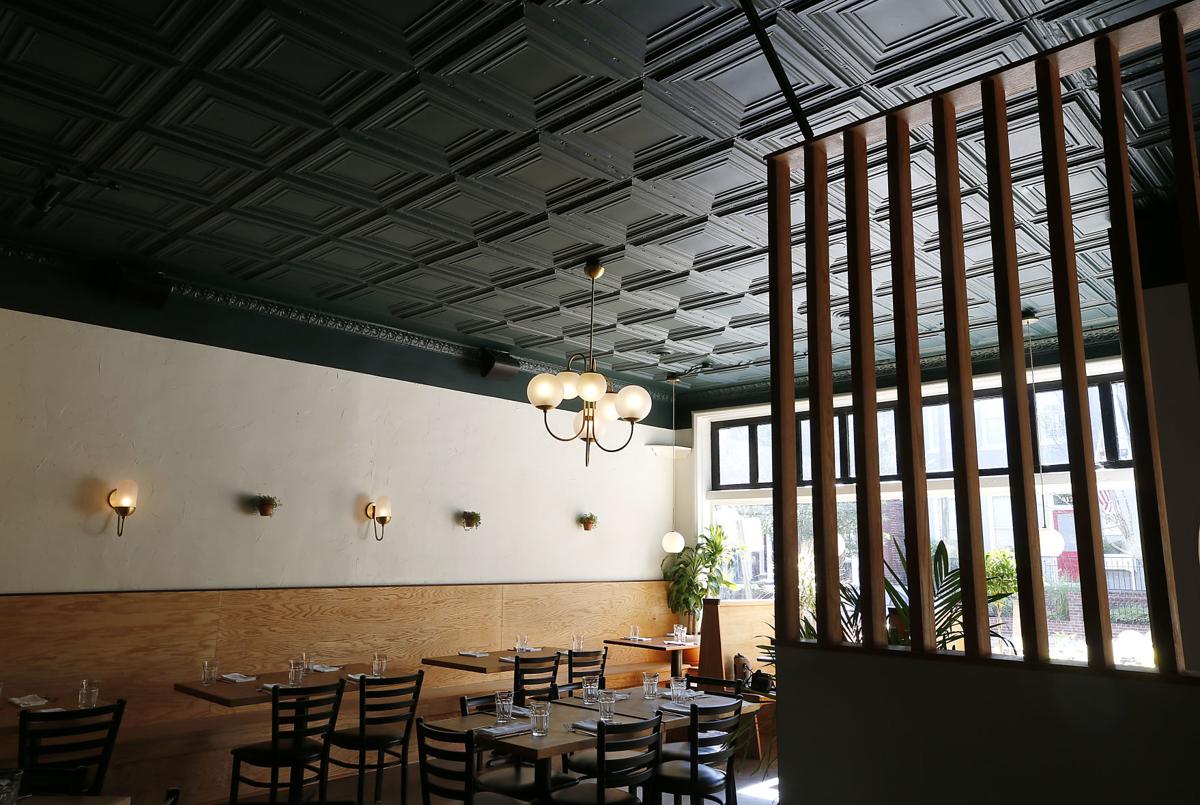 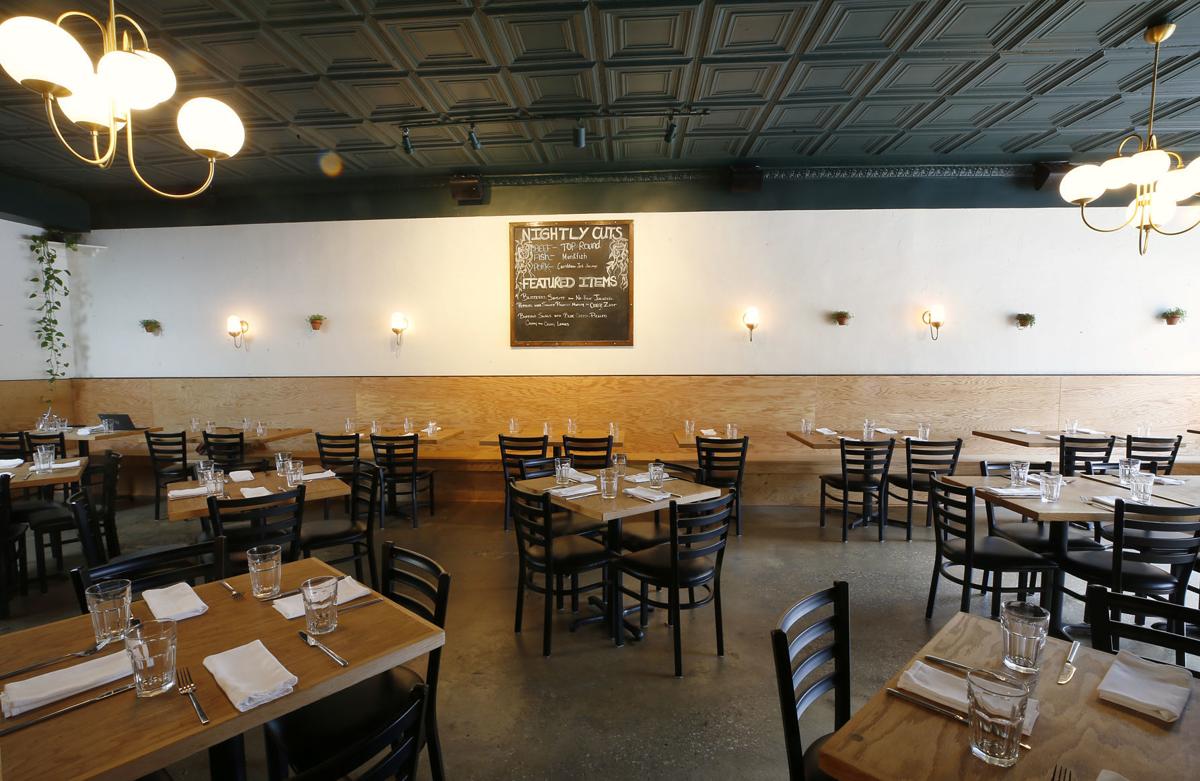 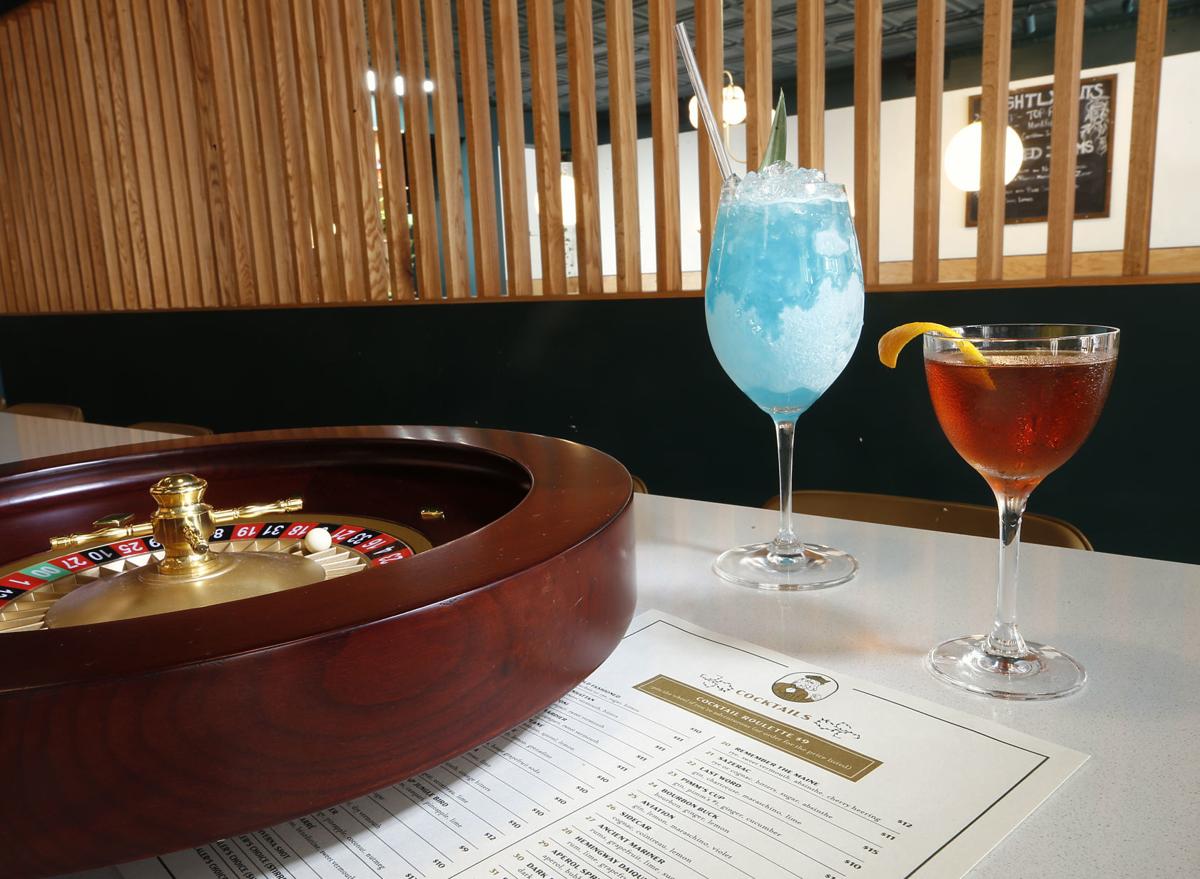 For a different spin on cocktail ordering, the Scuffletown Garden roulette wheel can decide which well-crafted classic or tiki drink you should have. 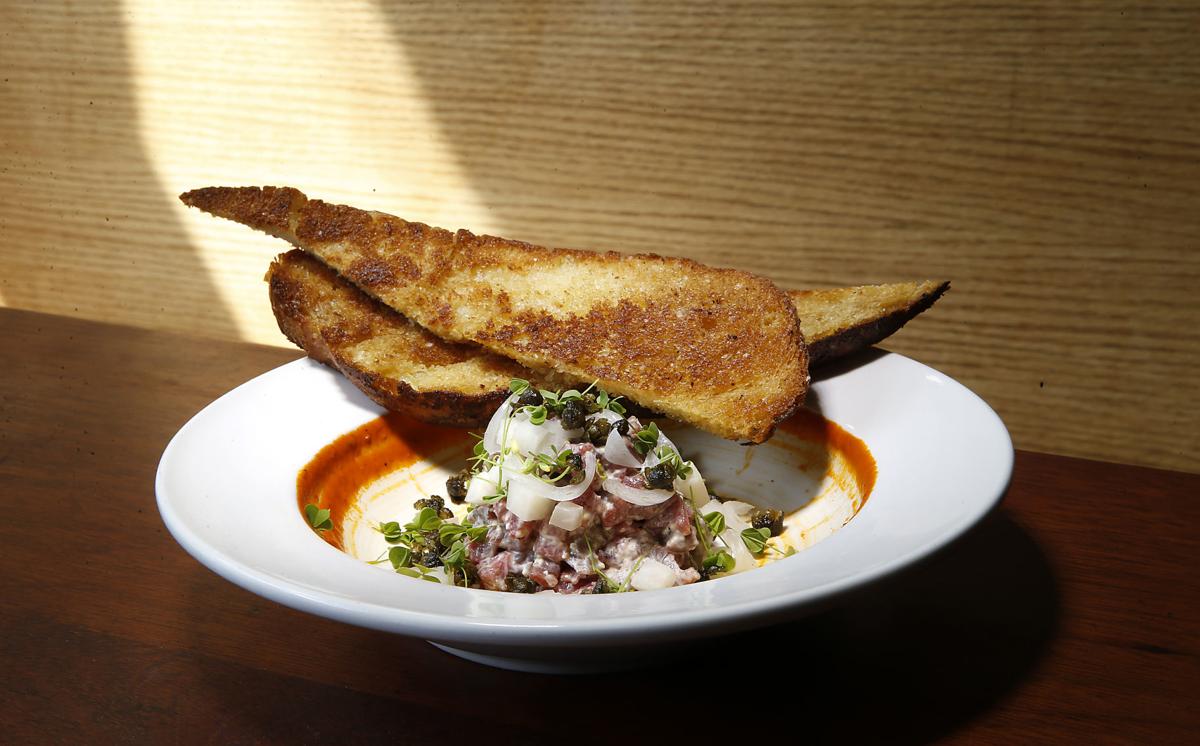 Chef Adam Campbell’s version of beef tartare, roughly chopped like tuna poke, is a substantial and satisfying starter on his menu of polished dishes. 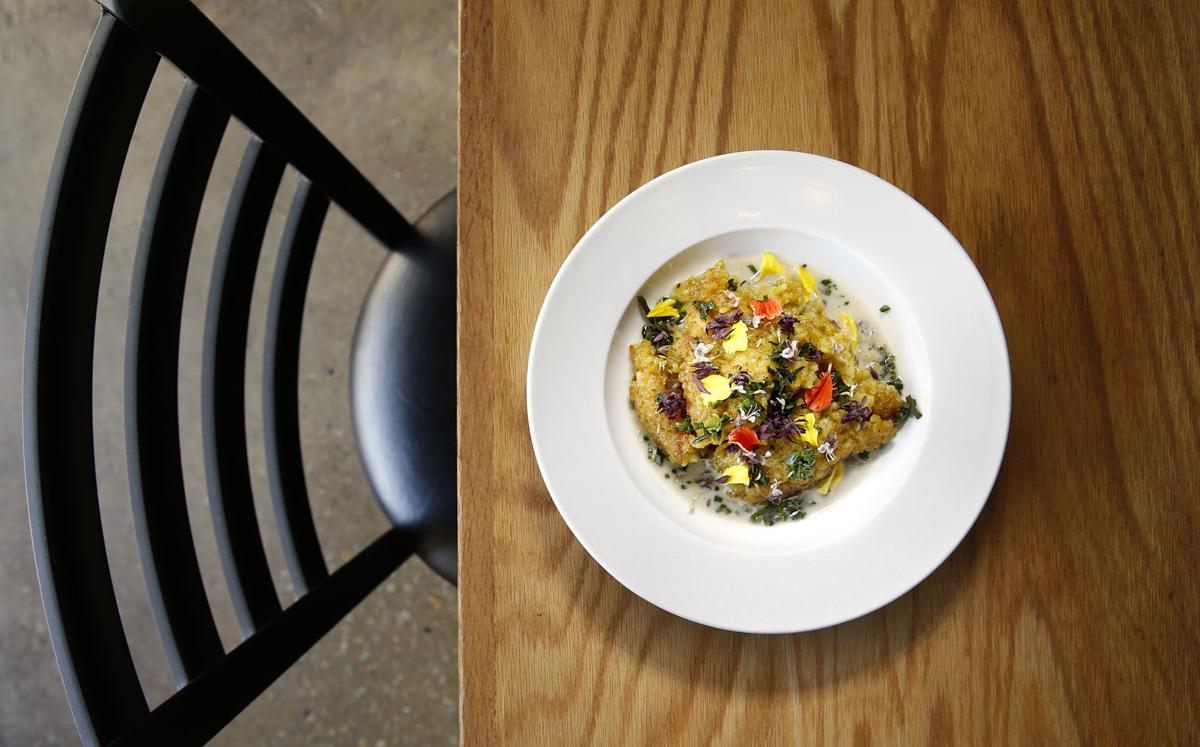 Curry calasparra, among the standout side dishes, captures the beauty of scorched crispy rice. 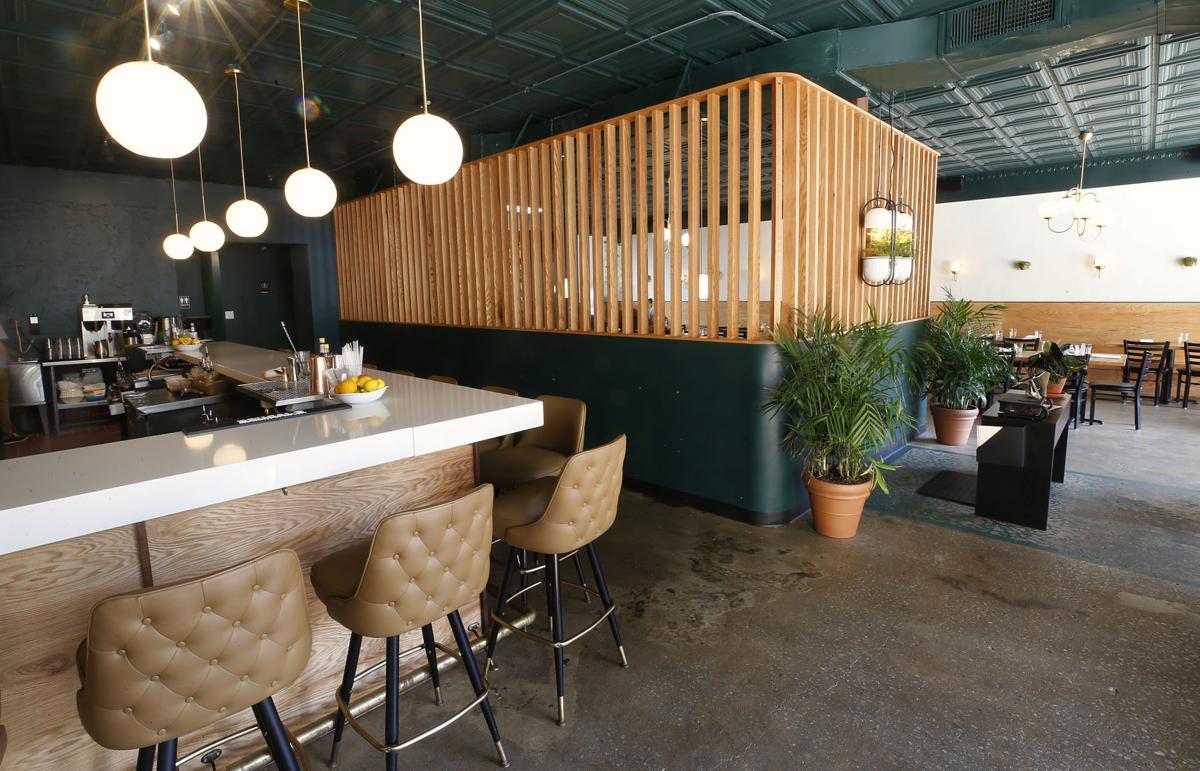 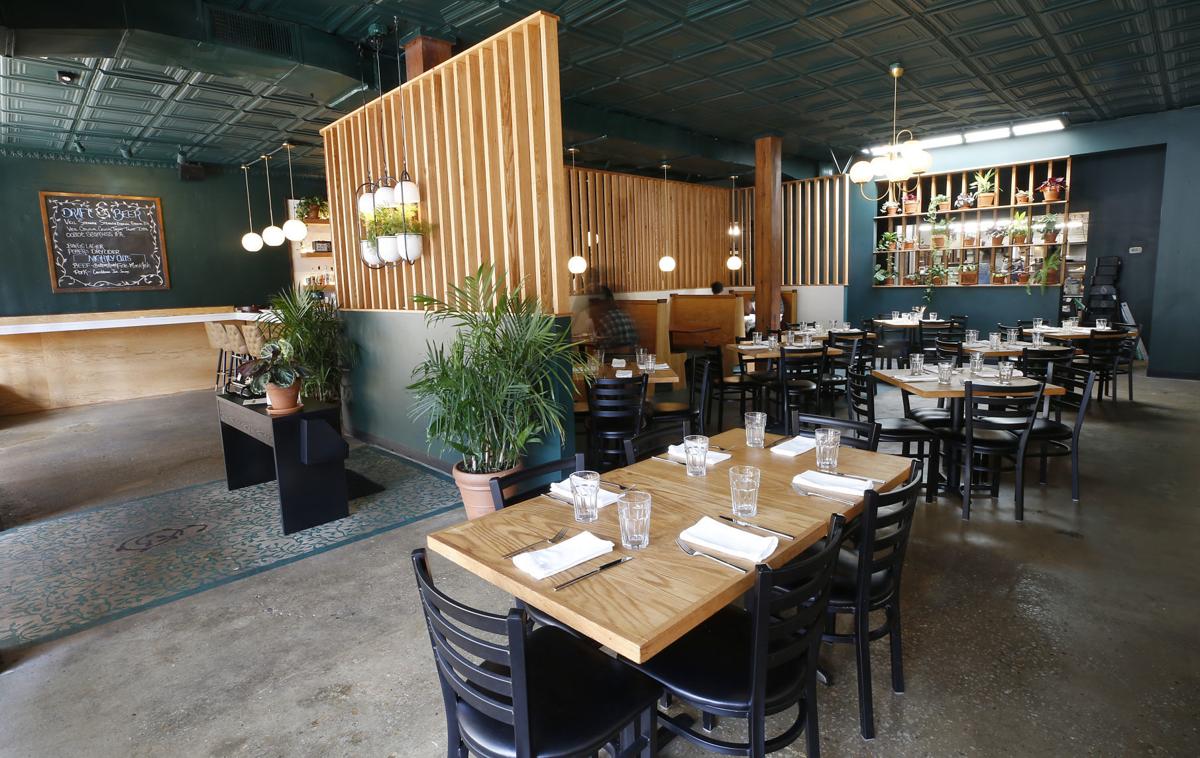 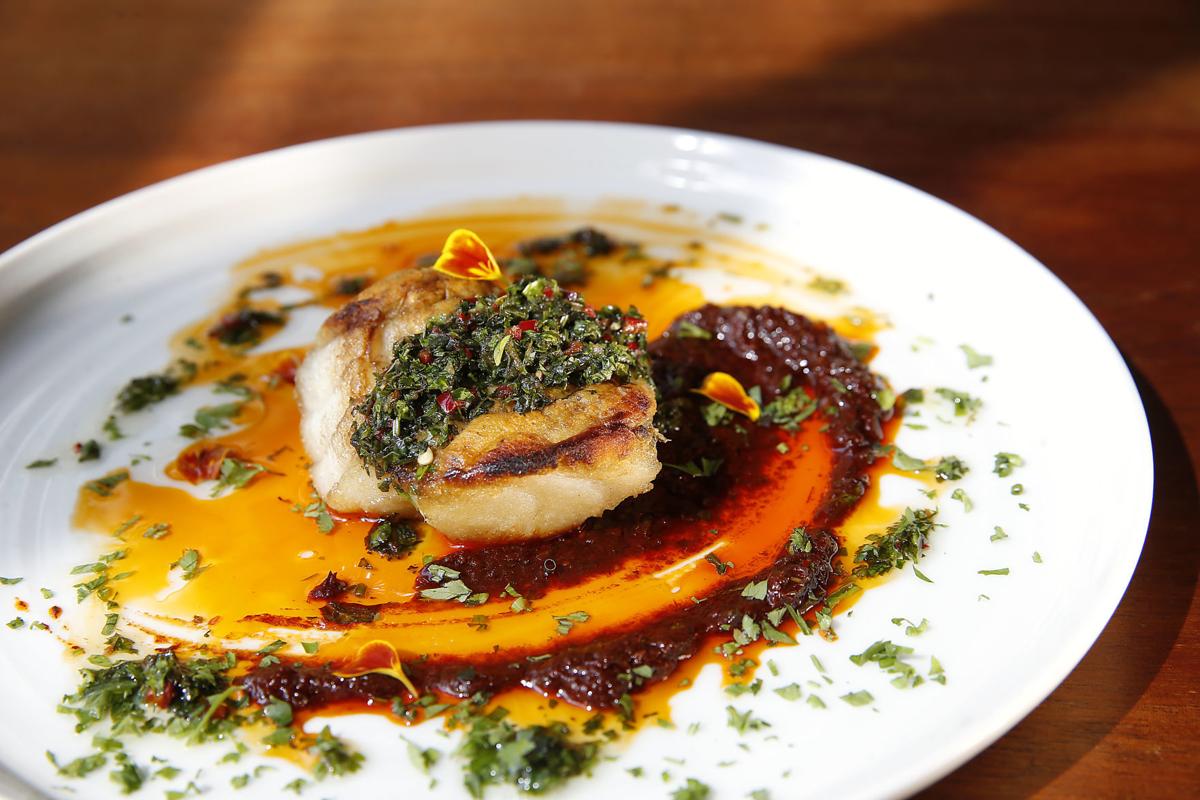 Monkfish is one of the Nightly Fish” on the menu at Scuffletown Garden Restaurant & Bar Wednesday, August 14, 2019. 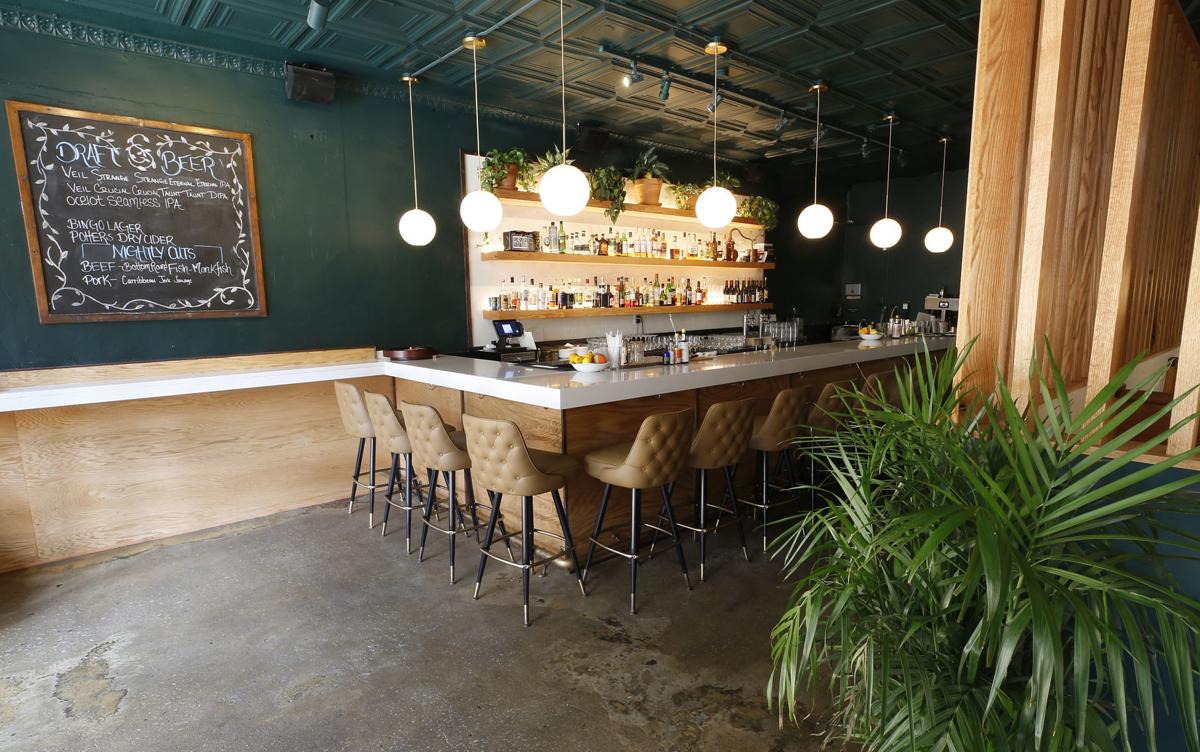 The former Strawberry Street Café space in The Fan has been transformed into a cross between a greenhouse and a West Elm design store. The once-famous bathtub garden bar is now an actual garden displayed outside the restaurant. The dining room has turned lush and green, with potted houseplants that sit statuesque in the storefront window or that hang on the wall like horticultural sconces. Diners commune at booths and banquettes crafted out of rough, unfinished wood. Breezy white-and-gold accents add a touch of modern elegance.

Much like the space, chef Adam Campbell’s food feels like a natural, living, breathing thing. His ideas are fresh and botanical. And nearly all his dishes have such an organic ease to them that you can forget how sophisticated and thoughtful they truly are. The refreshing sense of naturality and effortlessness here reminds me of beloved establishments such as Prune in New York City and Chez Panisse in Berkeley, Calif.

Campbell’s dishes are, for the most part, remarkably polished. They’re so comfortable in their own skin, in fact, you’d never guess the restaurant has been in operation for only a few short months.

This isn’t to say everything is perfect. The top round roast ($18), despite the noble efforts of a richly flavored au jus, tasted unspectacularly like a homey roast beef from a small-town diner. And though the pasta itself was elegantly crafted, the flavors of the beef shank tagliatelle ($18) — shaggy beef shank, golden beets, bloody sorrel, and purple sage — didn’t quite cohere.

The starters were exceptional, though. Unlike a typical tartare where the beef is sliced so thin it dissolves like Japanese rice paper, Campbell’s version of beef tartare ($12) was substantial. The beef was roughly chopped, like tuna poke, into pieces that stood firm and enabled you to savor their raw sweetness, alongside some sharply vinegary pickled turnips, alliaceous notes of pickled ramps, and smoky piquillo pepper sauce.

Accompanying the Bibb lettuce wraps ($13) was a lusciously fatty braised pork belly that tasted like Chinese char siu. This was paired with a kaleidoscope of pickled vegetables, each contributing a different shade of acidity — kohlrabi, lightly salty; onions, tart and assertive; cucumbers, sweet and herbaceous — to cut the unctuousness of the pork.

As for the mains, the monkfish ($17) took me by surprise. The fish was prepared simply, pan-fried with a nice rust-colored crust. But the sauces, a duel of light and dark — a perky green chimichurri and a red plum-colored charmoula, with the earthy musk of ancho, guajillo and arbol chiles and cumin — brought a breathtaking complexity to this dish.

The half chicken ($15), meanwhile, which had been rolled up like porchetta, had such a velvety quality I was convinced it had been cooked sous-vide. As it turns out, Campbell is just highly skilled at roasting chicken.

Another standout was the special risotto ($16) laced with baby chanterelles, pale green favas and cherry tomatoes. The most prominent features of this dish — the fruity aroma of madeira wine and bold, ripe funk of Grana Padano cheese — were rich and intoxicating.

And don’t forget about the sides, which diners are encouraged to order with their mains (for $5). The curry calasparra rice was easily my favorite. The dish, perfumed with a mild curry, captured the beauty of scorched crispy rice, the kind that one eagerly scrapes as a delightful treat off the very bottom of the pot — what the Spanish call “socarrat,” the Persians call “tahdig” and the Cantonese call “fan jiu.”

Other highlights included the miso-roasted carrots and chicories, fortified with a bracing, shrublike Black Walnut Bay sauce that evoked the flavors of oyster sauce and hoisin; and the black garlic potato salad, coated in a sauce as thick and dark as Chinese black-sesame soup.

To drink, let your fate be decided by Scuffletown’s roulette wheel, a fun and lighthearted approach to cocktail ordering. Each number on the wheel goes to one of many well-crafted versions of classic cocktails and modern tiki drinks, like the Bourbon Buck cocktail that I enjoy (as apparently does actor Ethan Hawke, who, while filming here, has become a restaurant regular).

At the crux of it all, there’s something magical being cultivated here at Scuffletown. The seeds of greatness have been planted, and Campbell’s cooking is already blossoming in ways that belie the restaurant’s brief existence. With a little time and nurturing, Scuffletown promises to become one of those cherished institutions that keep Richmond diners coming back time and time again.

Ideal for: sophisticated food that still manages to convey a sense of naturality and effortlessness

Best seat in the house: banquette by the window or at the bar

Parking: no, street parking only

'Nostalgia can drive people to be very nasty': Scuffletown Garden - the restaurant that opened in the Strawberry Street Café space - is closing

For a different spin on cocktail ordering, the Scuffletown Garden roulette wheel can decide which well-crafted classic or tiki drink you should have.

Chef Adam Campbell’s version of beef tartare, roughly chopped like tuna poke, is a substantial and satisfying starter on his menu of polished dishes.

Curry calasparra, among the standout side dishes, captures the beauty of scorched crispy rice.

Monkfish is one of the Nightly Fish” on the menu at Scuffletown Garden Restaurant & Bar Wednesday, August 14, 2019.