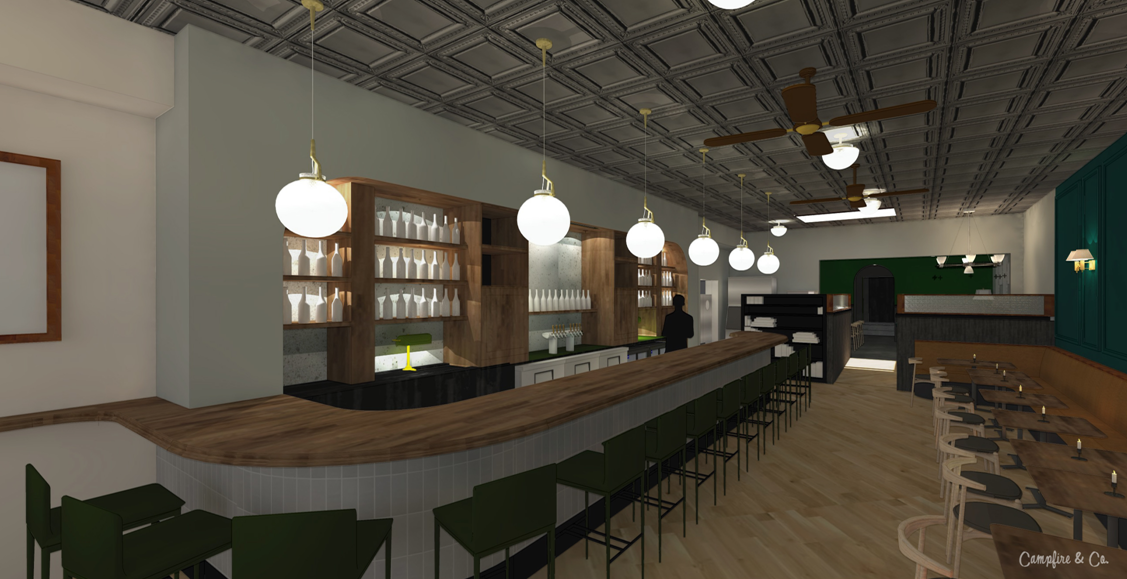 Consider this the mic drop of Richmond's cocktail scene: Mattias Hägglund and Thomas "T" Leggett are opening The Jasper - a new bar in Carytown later this year.

If you don't know Hägglund and Leggett's names (don't worry about whether you can pronounce them), you haven't been paying attention to anything happening in the Richmond craft cocktail scene in at least the last five years.

Basically, they're extremely locally famous barmen - and now the two are realizing their dream of opening their own cocktail bar - right in the heart of Carytown.

"T and I have been talking forever about doing something together and opening a place," Hägglund said. "We even met with a potential investor (years ago). "After I sold Heritage last fall - this opportunity came about nearly a year ago when my friend Kevin (Liu) reached out to me."

Liu is no slouch when it comes to cocktails - or Richmond dining.

Lui is the co-owner of Tin Pan restaurant and music venue in western Henrico County and in 2016 bought Carytown Cupcakes at 3111 W. Cary St.

Lui is now also a partner in The Jasper, which is adjacent to Carytown Cupcakes.

"I wanted to partner with Mattias and T because they're awesome people/awesome bartenders," Liu said. "I've been friendly with both for a long time, and when I heard that Mattias left Heritage, we started having conversations about what's next. Mattias has daydreamed about opening something with T for a long time. Then the 3113 space became available, and it seemed like a perfect opportunity."

Restaurant ownership isn't Liu's only connection to the cocktail culture. He's a regular contributor to the web publication Serious Eats and is the author of "Craft Cocktails at Home: Offbeat Techniques, Contemporary Crowd-Pleasers, and Classics Hacked with Science."

"Kevin is one of the least-known cocktail bad-asses in town," Hägglund said.

And now the three of them - Liu, Hägglund and Leggett are coming together to make something of a super bar with The Jasper, which will be at 3113 W. Cary St. in the space that formerly housed Carey Burke Carpets.

The focus at The Jasper will be drinks - all kinds of drinks. Certainly the three will focus on cocktails, but Hägglund is quick to add that there will also be plenty of cheap, canned beer (and fancy beer) - and a fantastic and affordable wine selection.

"We are looking to surprise and please anyone who walks in the door," he said.

Of course there will also be food (this is Virginia after all; bars are still illegal). The menu will include small plates designed to complement the drinks, but the folks behind The Jasper want it to be a place where guests can nosh as opposed to dine.

"We are people who are passionate about all things food and drink – but especially drink," Hägglund said. "We want to be something to enhance your overall night."

Hägglund also noted that the bars at many restaurants in town serve as overflow seating for dinner guests, so there's a need for a place where diners can enjoy an informal bite and drink - even at dinnertime.

The name - The Jasper - is an homage to Richmond's cocktail roots. It's named for Jasper Crouch, a circa 1800s Richmond barman.

"We wanted to honor Richmond’s bartending history," he said.

But overall, Hägglund hopes that The Jasper will add to Richmond's cocktail and dining scene.

"It just keeps getting better and better," he said. We’ve moved out of the initial discovery phase. Not it’s legit a community. It’s a great time for a drinker."

Zagat has put  a round of the "30 most exciting food cities in America 2017" and of course Richmond was on the list.

New exhibit at Virginia Historical Society highlights the '80s, kicks off with an ‘80s costume party with '80s cocktails

Break out your leotards, Richmond, for a costume party and "totally rad" ‘80s-themed photo exhibit featuring photos from the archives of the R…

How’s the ice cream in Michigan? Richmond is about to find out.

RVA Bar Fly: The Jasper will show you how little you know about cocktails

Carytown isn’t exactly known for its nightlife, nor as a fine-dining destination. And yet, somehow, one of the city’s most buzzed-about cockta…

Lee Gregory, half of the founding ownership team of The Roosevelt in Church Hill, has sold his stake in the award-winning restaurant to Mark H…

The Jasper named one of 'The South’s best new bars'

The Jasper was named one of the "The South's best new bars" by Garden & Gun magazine.