Neighborhood Restaurant Group is planning a 25,000-square-foot food hall, The Belleville, that is expected to have at least 15 vendors. 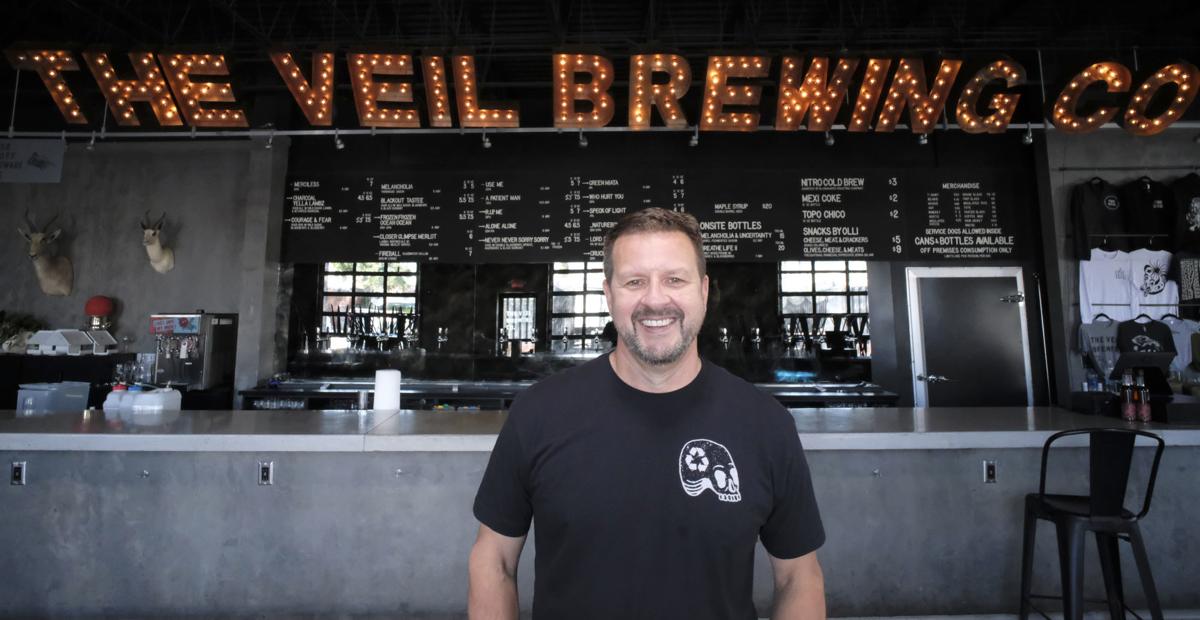 Dave Michelow with The Veil Brewing Co. says the company has been looking for a way to expand. 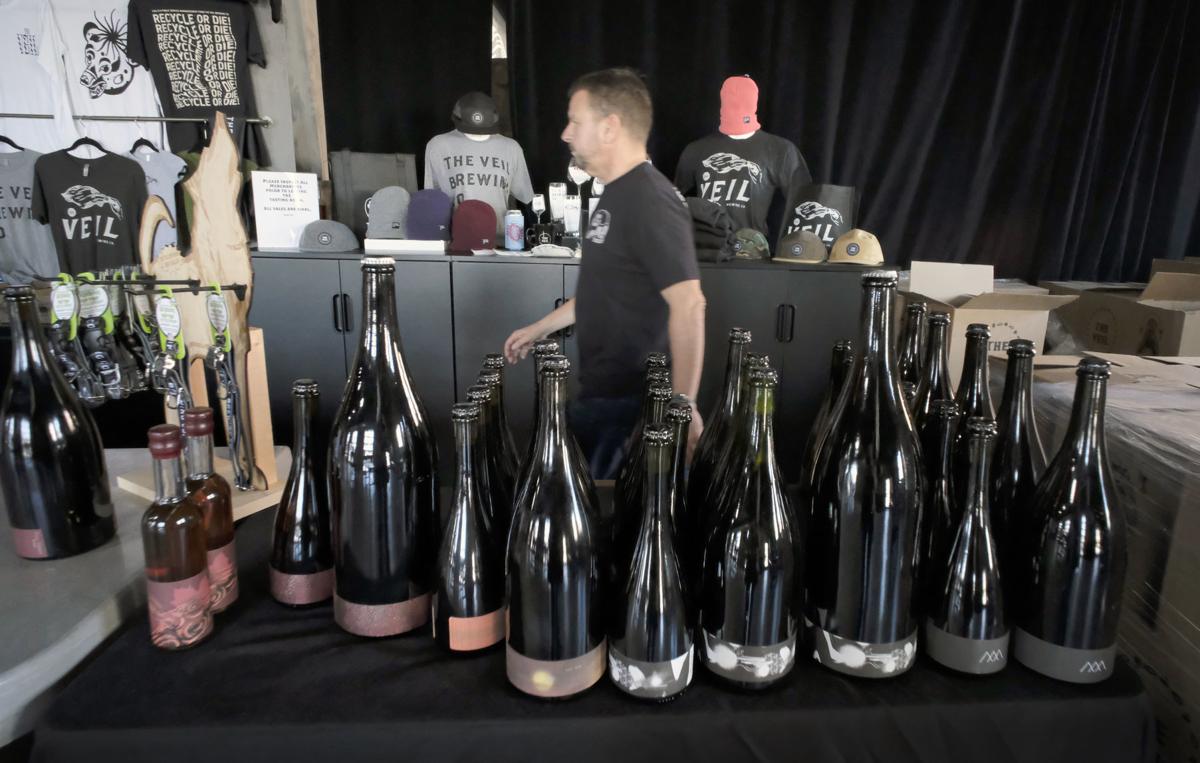 Dave Michelow, co-founder of The Veil Brewing Co. walks past a display of specialty beers inside the tap room in Richmond, VA Thursday, Oct. 3, 2019. 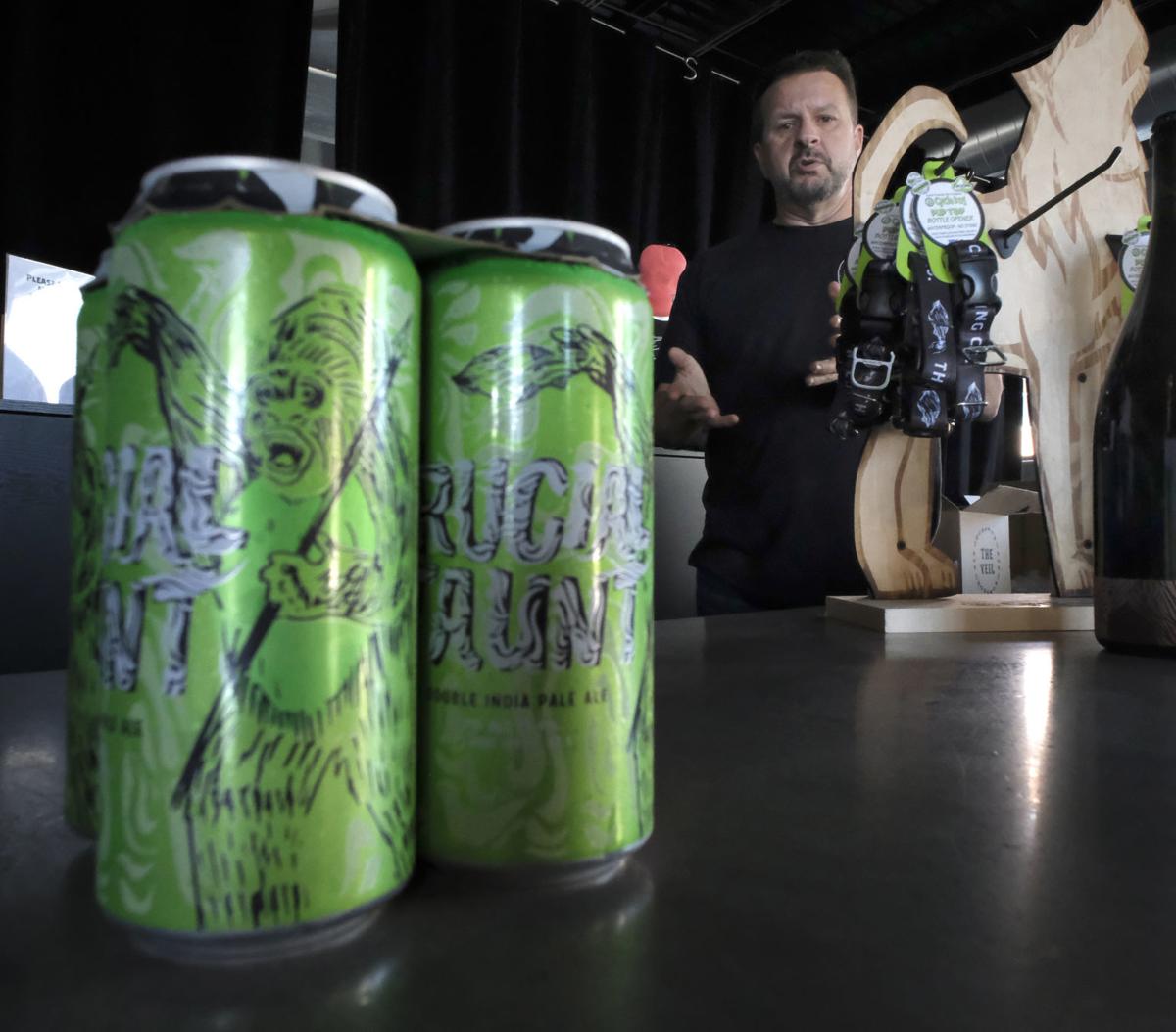 Dave Michelow, co-founder of The Veil Brewing Co. talks about "Crucial Taunt", one of the company's beers as he stands inside the tap room in Richmond, VA Thursday, Oct. 3, 2019.

Some of the beers available at The Veil Brewing Co.inside the tap room in Richmond, VA Thursday, Oct. 3, 2019. 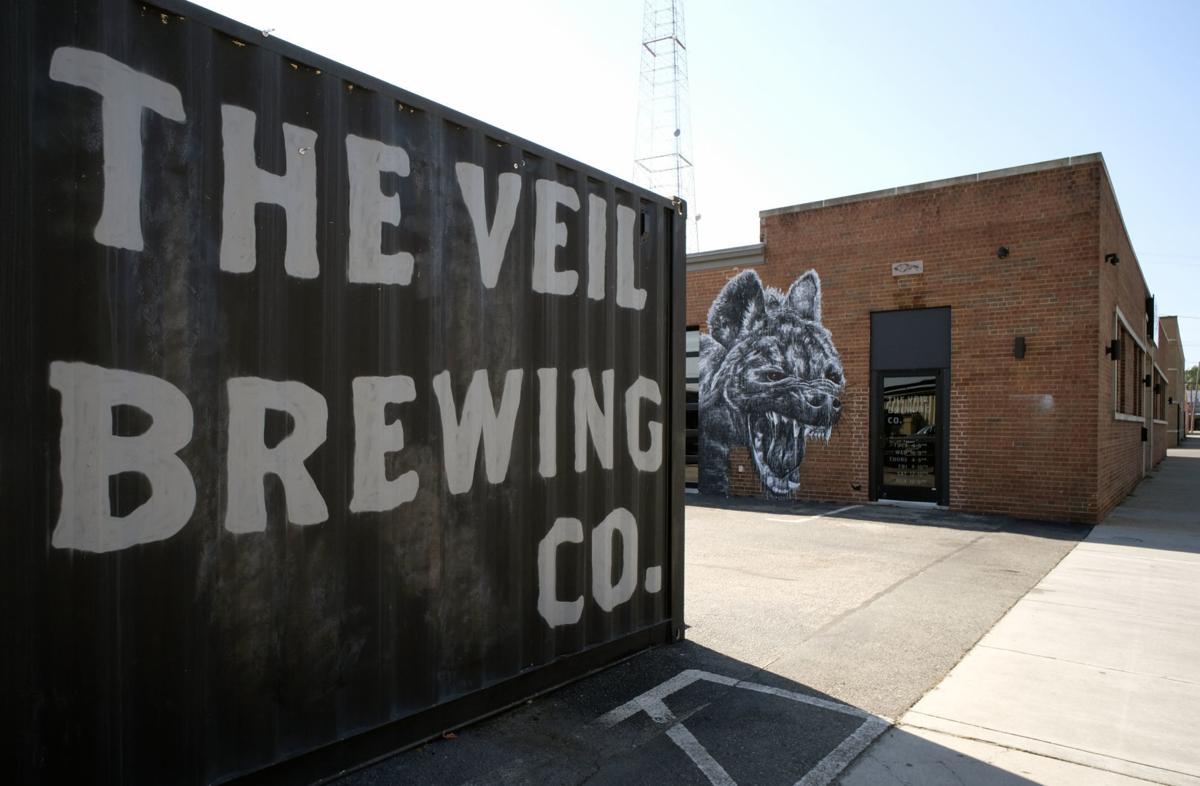 Neighborhood Restaurant Group, an Alexandria-based restaurant group, this week announced The Belleville, a 25,000-square-foot space in the works at 1509 Belleville St. that will feature roughly 18 food vendors, The Veil’s taproom and three bars — one of which will sit on the building’s rooftop.

“Having spent a great deal of time in Richmond, I’ve long been drawn to the energy and excitement happening in Scott’s Addition,” Michael Babin, founder and principal of Neighborhood Restaurant Group, wrote in a statement. “Opportunities to plant the first food hall in a major city like this don’t come along every day — that, coupled with the opportunity to work with The Veil, makes this project too good to be true.”

The Veil Brewing Co. will move its Scott’s Addition taproom from 1301 Roseneath Road to The Belleville when it opens in 2020.

Co-owners Dustin Durrance, Dave Michelow and Matt Tarpey in April 2016 opened The Veil Brewing Co. at it current location in an 11,000-square-foot building that previously housed a church.

The Veil quickly became a brewery that attracted beer enthusiasts along the East Coast, with locals and visitors coming for its “hop-forward” brews and can releases on Tuesdays. The Veil has won a variety of accolades from industry publications and insiders, including being called one of the best new breweries in the world and one of the best in America.

“This has been under wraps for a while,” Michelow said of the move to a new space. “The genesis is that we needed more room in production. We all stay in one office with 12 to 14 full-time people working in one space. It gets cramped.”

Michelow said they’ve been searching for the right space for expansion for two years and were thrilled to be able to partner with Neighborhood Restaurant Group on the project. The restaurant group specializes in beer-focused restaurants, and its restaurants were the first and thus far only ones in the Washington area that serve The Veil’s beers on tap.

“The Veil and NRG have had a mutual admiration for each other, bonding over a broader approach to beverage, food and hospitality,” wrote Greg Engert, Neighborhood Restaurant Group’s partner-beer director. “We’ve been plotting ways to work together for some time, outside of proudly pouring The Veil at many of our restaurants.”

Once The Veil transitions its taproom to The Belleville food hall, it will begin production expansion in the Roseneath space, in part to help ramp up production for the two other breweries it has in the works.

Both will have on-site food options, a rarity for breweries, which usually rely on food trucks to provide food options for visitors. In Norfolk, The Veil is working with Codex, chef Ian Hock’s acclaimed 2-year-old Norfolk restaurant, to create a “kind of slimmed-down restaurant menu,” Michelow said.

The Veil’s Norfolk spot will be “kind of a modern brewpub,” Michelow said, similar to what’s in the works in The Hill Standard development on Forest Hill Avenue, where The Veil is partnering with Richmond’s Pepe’s Mexican restaurant to create a menu exclusive to that location.

Having on-site restaurants at all of its breweries, as will be the case in 2020, wasn’t intentional, Michelow said. “It turned out that way,” he said, but they knew going into the Forest Hill and Norfolk projects that they wanted to be very specific with the food concepts to complement the beer selection.

The food vendors haven’t been announced for The Belleville food hall project.

Neighborhood Restaurant Group will lead the curation of those vendors “largely selected from the dynamic Richmond dining scene, with a few outlets highlighting some of the best and most innovative chefs in the country,” according to a news release. It also will manage the events and operations of the space as well as two cocktail and wine-focused bars, plus the rooftop bar.

The Belleville space is at the corner of Belleville and West Moore streets, a block west of The Dairy Bar and almost across the street from Tang & Biscuit Shuffleboard Social Club.

Neighborhood Restaurant Group and The Veil are working with the Richmond architecture firm Fultz & Singh and Richmond-based developers Birck Turnbull and Charles Bice, the duo behind High Summit Partners, to renovate the space for The Belleville into the food hall.

High Summit Partners also worked on The Veil’s original Roseneath Road location and are the developers on the Forest Hill Avenue project.

According to property records, High Summit Partners closed on the Belleville Street building in February.

There isn’t an opening date yet for The Belleville, though Michelow said summer 2020 would be ideal.

Stella's Grocery - the gourmet market from the Giavos family - is opening on Forest Hill, in The Veil Brewing center

The food and drink folks at Thrillist.com assembled "a crack team of experts" to find the best craft brewery in every state - and it should co…

It’s hard to believe there’s room for more to do in Scott’s Addition, but on Friday, Richmonders will have another option with the opening of …

Celebrated Richmond chef Brittanny Anderson is opening a restaurant in the coming-soon to D.C. food hall, The Roost.

It looks as if Richmond won’t get a food hall after all — at least not in The Belleville, which was touted as the city’s first and slated to o…

Neighborhood Restaurant Group is planning a 25,000-square-foot food hall, The Belleville, that is expected to have at least 15 vendors.

Dave Michelow with The Veil Brewing Co. says the company has been looking for a way to expand.

Dave Michelow, co-founder of The Veil Brewing Co. walks past a display of specialty beers inside the tap room in Richmond, VA Thursday, Oct. 3, 2019.

Dave Michelow, co-founder of The Veil Brewing Co. talks about "Crucial Taunt", one of the company's beers as he stands inside the tap room in Richmond, VA Thursday, Oct. 3, 2019.

Some of the beers available at The Veil Brewing Co.inside the tap room in Richmond, VA Thursday, Oct. 3, 2019.