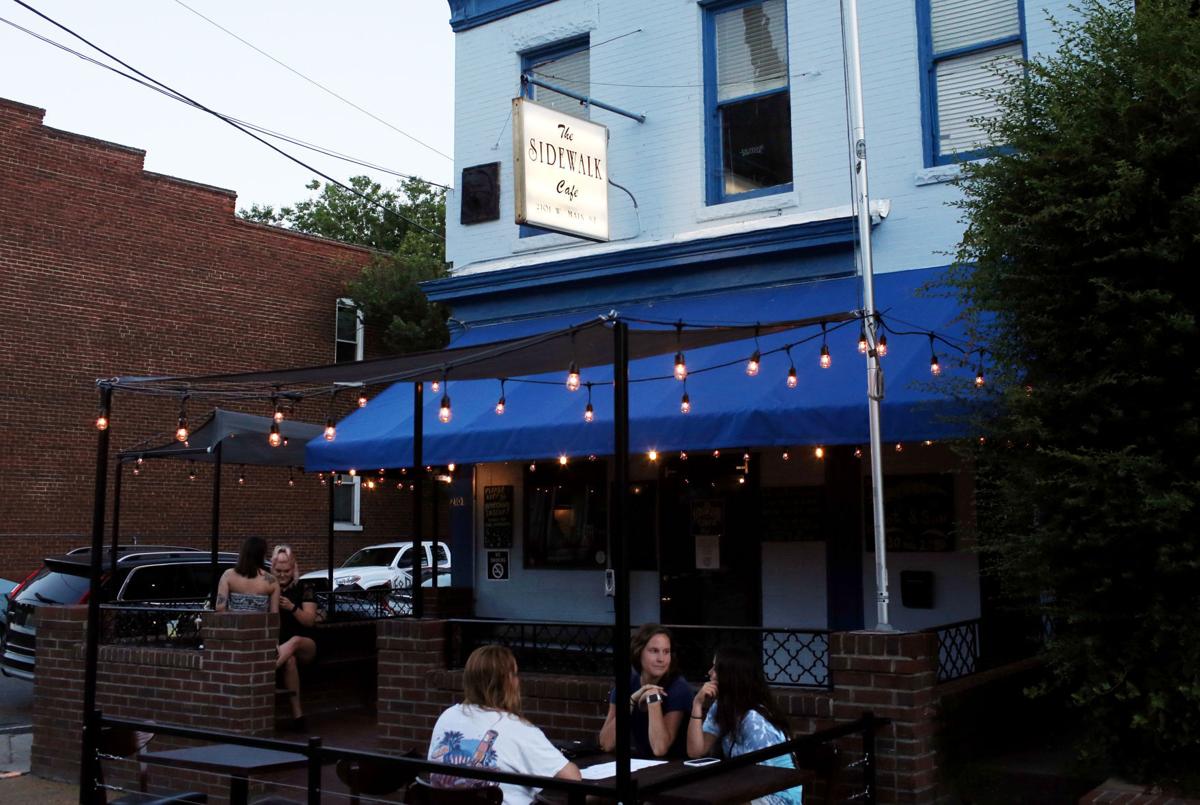 Customers dine at the outside patio of The Sidewalk Cafe in Richmond. 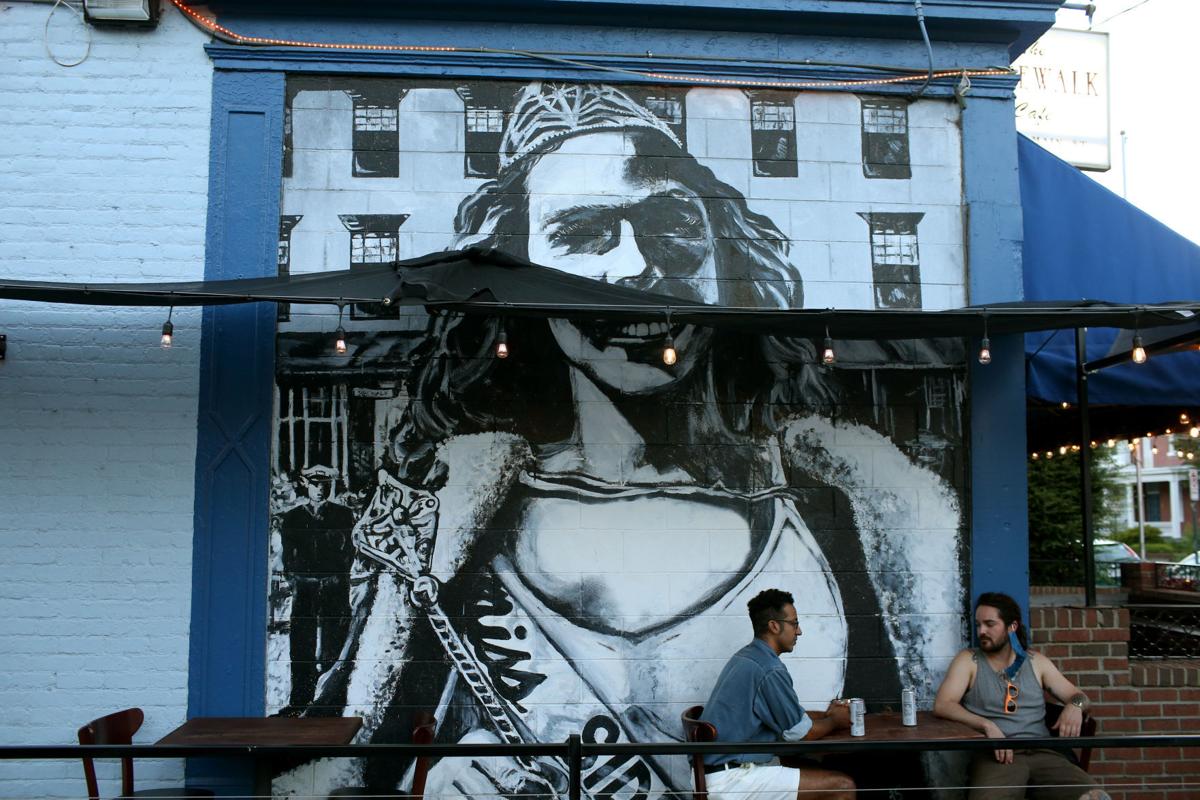 The Sidewalk Cafe has created outdoor seating as part of a Richmond program that relaxes restaurant policies. 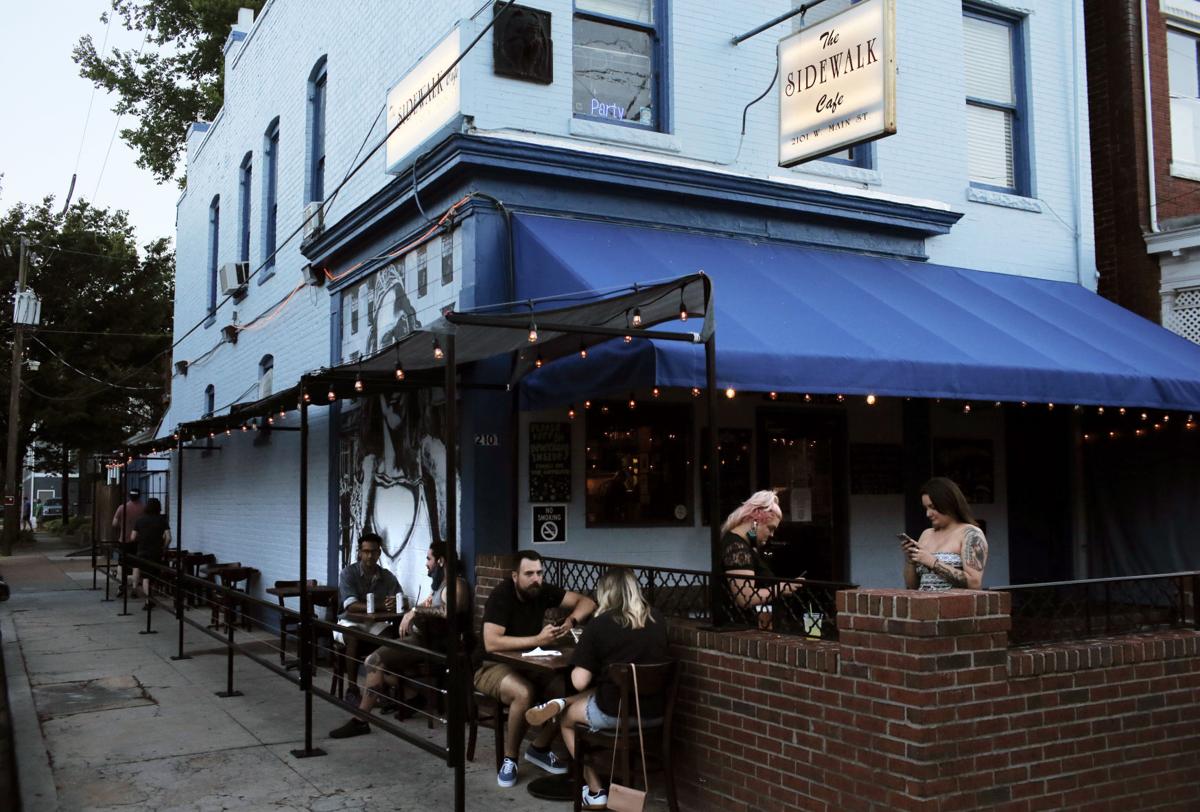 Customers dine at the outside patio of The Sidewalk Cafe in Richmond on Thursday, July 9, 2020. 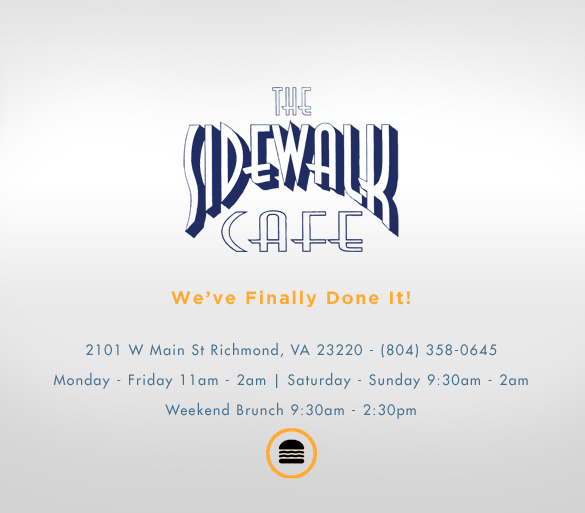 After 29 years of waiting, The Sidewalk Cafe finally has a sidewalk cafe.

It took a pandemic to convince the city to allow the outdoor seating arrangement, but the mainstay Fan District eatery now has a half-dozen or so socially distanced outdoor tables on the sidewalk surrounding its building at 2101 W. Main St.

The new seating was installed this month after the city launched a program in May to help restaurants expand their outdoor seating during the pandemic.

Under Virginia’s Phase One reopening guidelines, restaurants could open for dine-in service only if they used outdoor seating. Now, in Phase Three, many customers prefer to dine outdoors as studies have shown fresh air can reduce the possible spread of COVID-19. The city program relaxed policies to allow restaurants to add or expand their outdoor seating into parking lots or along sidewalks, leaving enough space to allow people to safely walk past. The program mirrored those launched in Chesterfield, Henrico and Hanover counties, though those expansions were usually in adjacent parking lots as opposed to on public sidewalks.

“This is the nicest thing the city has ever done in my 31 years of business,” said Johnny Giavos, who opened The Sidewalk Cafe in the spring of 1991.

Giavos said that without expanded outdoor seating, he may not have been able to reopen many of his restaurants because of the limited seating inside. Today, Giavos owns or co-owns 10 Richmond restaurants (plus one in Charleston, S.C.), and three Stella’s Grocery stores — with two more groceries and one more restaurant on the way. The Sidewalk Cafe was his first restaurant.

“Richmond’s restaurant community is a huge part of what makes this city thrive, and has been among the most severely impacted during the ongoing COVID-19 pandemic. So we will continue to do whatever we can to help establishments survive this challenging time so they can do what they do best — serve some of the best food and drink in this country to those who come to live, work and play in our city,” said Jim Nolan, spokesman for Mayor Levar Stoney.

Chuck Davidson, Richmond’s zoning administrator, said the city zoning office has signed off on at least 10 parking lot patios, including at Perch, Bingo, En Su Boca, Kitchen 64 and Good Tymes. Approval for outdoor seating for sidewalks, which more restaurants could take advantage of, goes through Richmond’s Department of Public Works, which did not respond to questions about who has gotten the OK.

Not every restaurant that applies for expanded outdoor dining has built it so far. According to Virginia ABC, it has granted nine temporary outdoor dining extensions to its licensees in Richmond and a total of 38 in the city, Chesterfield, Hanover and Henrico counties.

The city is also working with Venture Richmond on a “Picnic in a Parklet” program, which could eventually allow restaurants to set up a mini patio in street parking spaces. The program is in the research phase and interested restaurants are being referred to Venture Richmond, which is helping assess needs and possibly offer free design services.

“We’ve had a really positive response from businesses,” said Max Hepp-Buchanan, director of riverfront and downtown placemaking for Venture Richmond. He said more than a dozen restaurants have expressed interest.

On the sidewalk and parking lot patios, though, Giavos said he’s taking full advantage of the new program.

He’s constructed and added outdoor seating atop a floating platform in the front parking lot of Little Nickel on Forest Hill Avenue, which opens to the public Thursday, and he’s working with the Virginia Alcohol Beverage Control Authority to put the proper barriers in place to open the sidewalk cafe he’s created on Grove Avenue for The Continental Westhampton. He’s also working to bring outdoor dining areas to Perly’s and Stella’s restaurants and with his business partners to add outdoor seating at Kuba Kuba Dos in Henrico.

But for Giavos, it all started with The Sidewalk Cafe, a little hole-in-the-wall eatery with Greek-inspired dishes where the goal was always to offer outdoor seating. It’s right in the name of the restaurant, which he said was inspired by a painting by his father’s cousin. The painting still hangs in the entrance of the restaurant, which you get to after passing through a vacant, bricked area constructed for a patio more than two decades ago.

The timeline is a bit fuzzy after all of these years, but Giavos said it was a few years after 1991 when he constructed the area in front of the building, built around 1910, to use as a patio. He paid the $1,000 fee for the special-use permit, required because even though the first story of the building has housed a restaurant since at least the 1930s, according to Richmond Times-Dispatch archives, it’s always been zoned for only residential use.

But the special-use permit application process, Giavos said, is when he learned that a neighbor opposed the patio, which meant he couldn’t have one. He tried again. And again. Giavos said he tried to open a patio at the restaurant three times over the years. Each time resulted in a fight, wasted money, then compromises that were ultimately rejected.

Eventually Giavos gave up and a Sidewalk Cafe without a patio became the stuff of local legend; anyone who visited the restaurant over the next three decades was bound to ask about it and so the menu has a statement on the back: “A sidewalk cafe without a patio is like a city without a council.”

But now, the restaurant’s website has a simple update: “We’ve Finally Done It!”

And they have. And Giavos hopes to keep his patio long after the pandemic has gone.

How to add a patio to your restaurant

Richmond restaurants interested in applying for expanded outdoor dining can visit rvastrong.org for details. The city is waiving the $300 application fee for restaurants.

Virginia ABC surpasses $1 billion in sales again, up by almost $120M - despite a 19% loss of restaurant sales

'Picnic in a Parklet': Richmond to install 5 parklets adjacent to restaurants and businesses

Patrons of several Richmond restaurants in the coming months will be able to enjoy meals on patios where cars would normally park on the street.

Customers dine at the outside patio of The Sidewalk Cafe in Richmond.

The Sidewalk Cafe has created outdoor seating as part of a Richmond program that relaxes restaurant policies.

Customers dine at the outside patio of The Sidewalk Cafe in Richmond on Thursday, July 9, 2020.