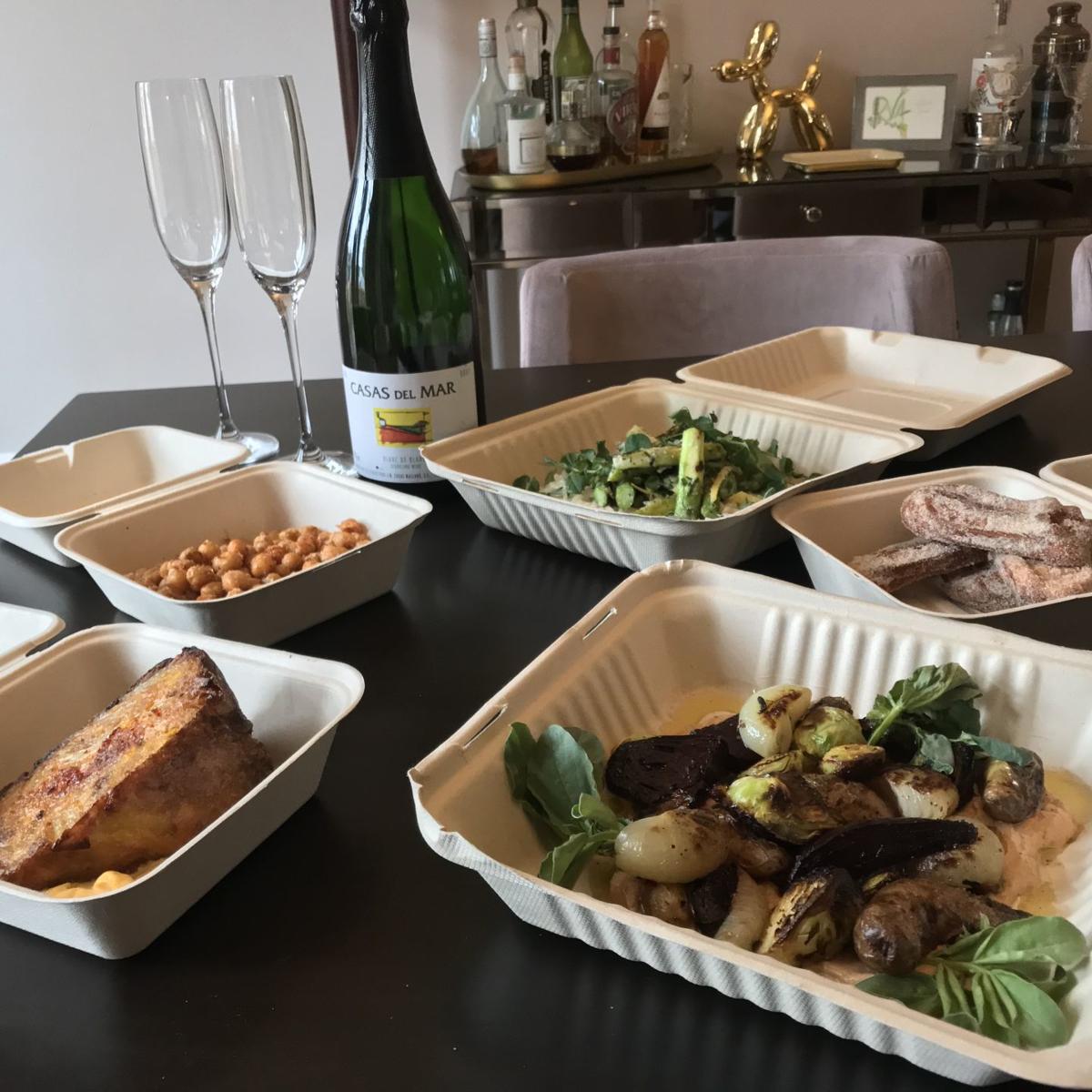 The five-course couple’s menu ($60) from Secco was a wholly sumptuous affair, with a choice of two antipasti, two share plates, dessert and a bottle of wine. 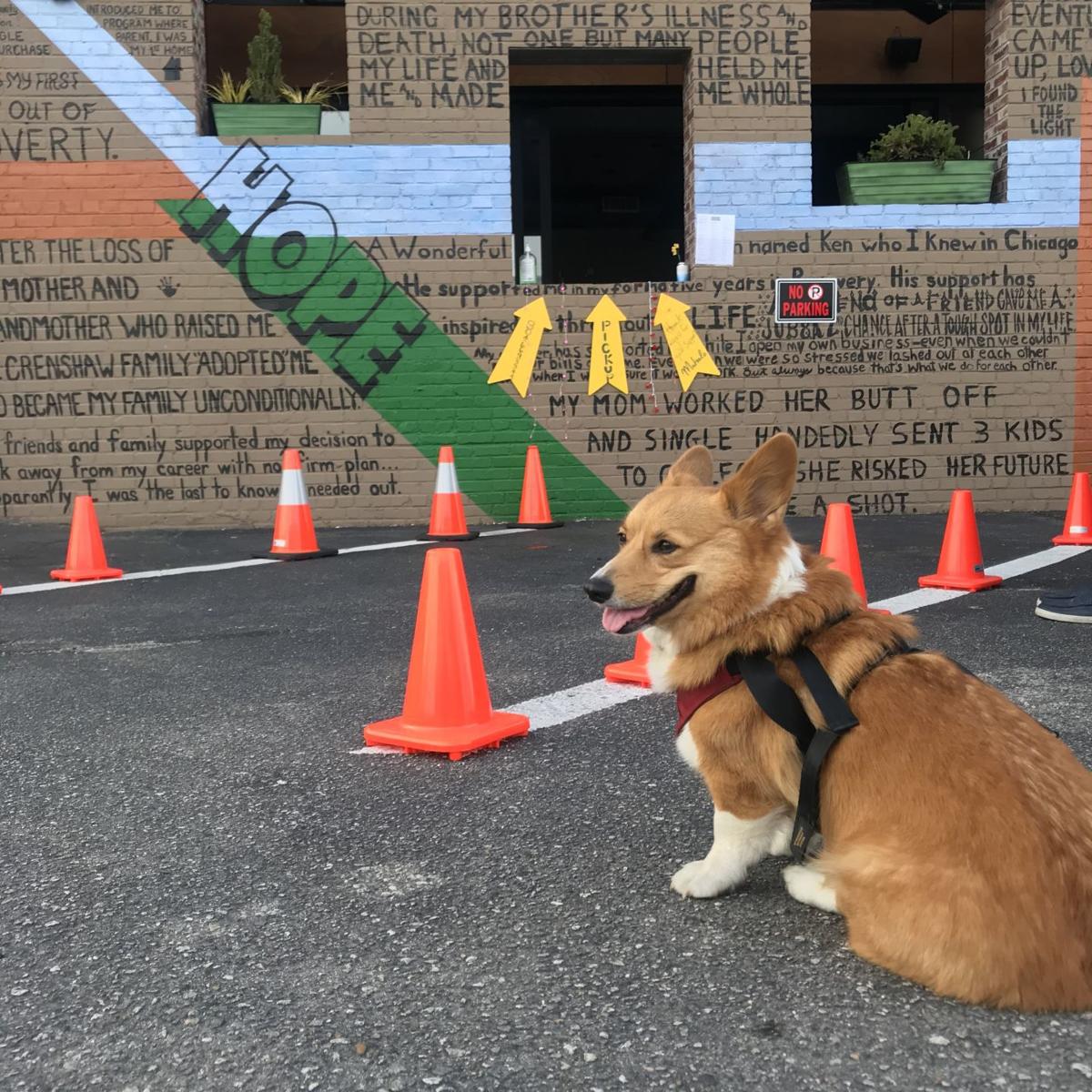 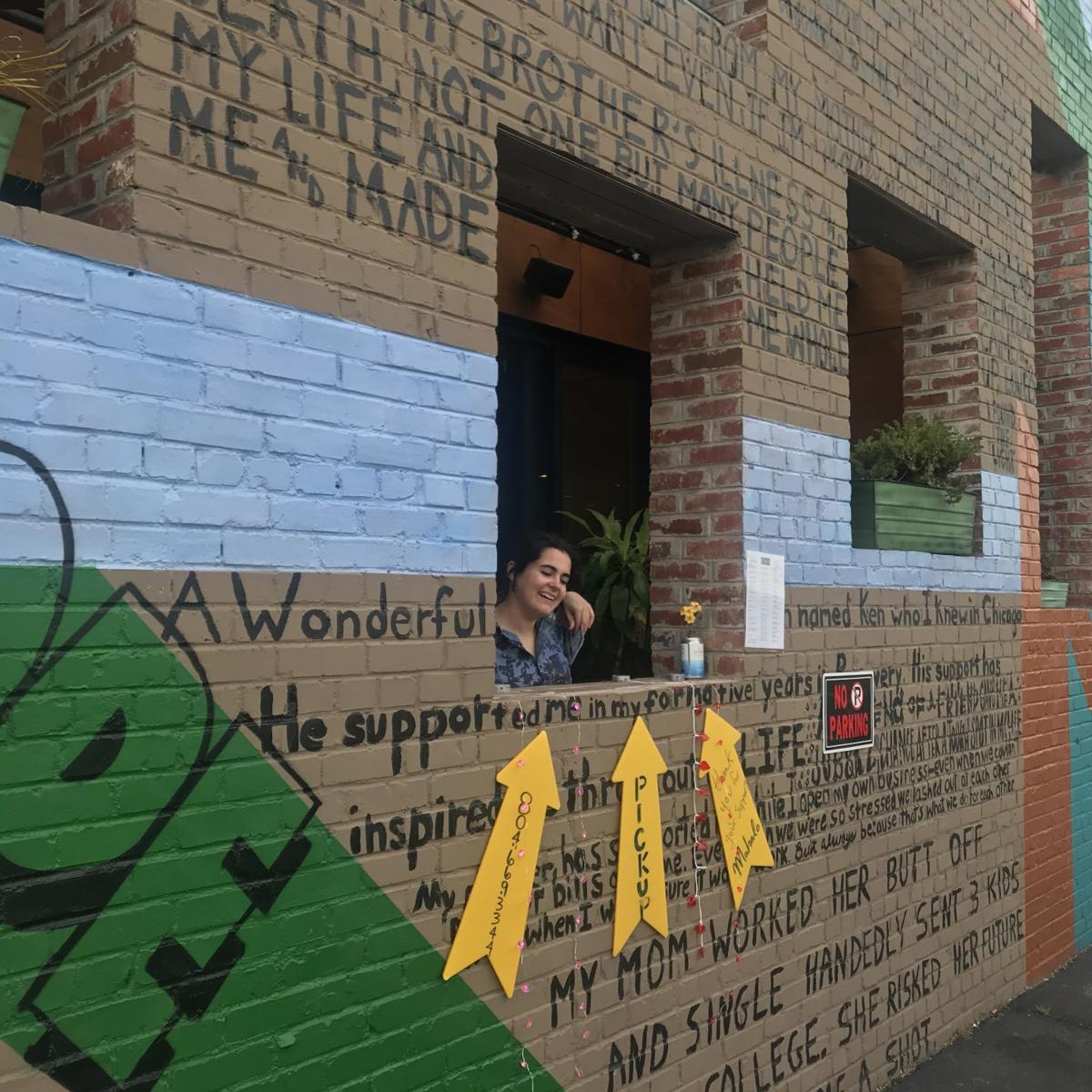 At the Perch takeout window, get dishes that riff on the pan-Pacific and Southern influences of chef Mike Ledesma. 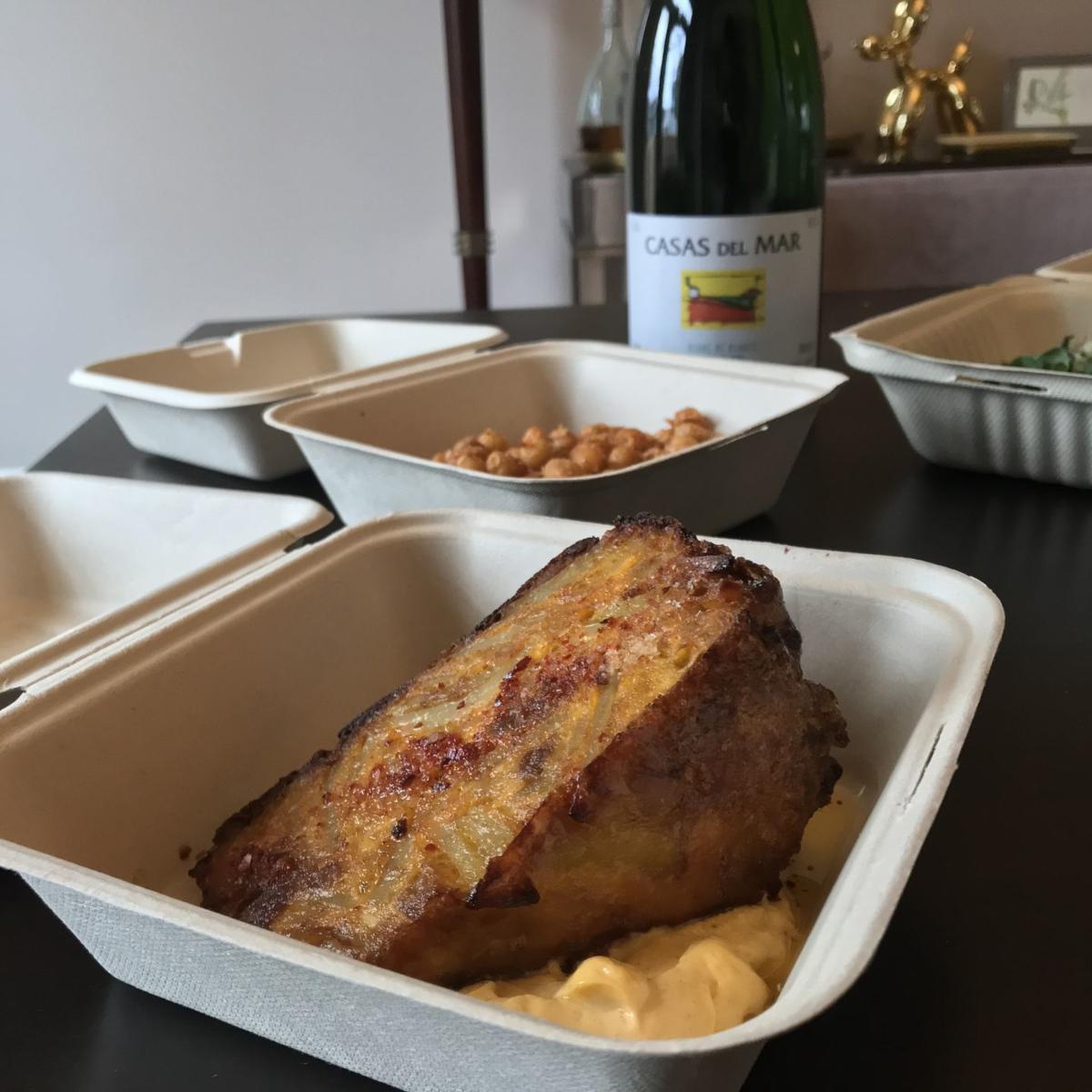 The five-course couple’s menu ($60) from Secco was a wholly sumptuous affair, with a choice of two antipasti, two share plates, dessert and a bottle of wine.

At the Perch takeout window, get dishes that riff on the pan-Pacific and Southern influences of chef Mike Ledesma.

Indeed, it was a barbecue restaurant in Battery Park City that literally gave my husband and me our very first taste of comfort — and working access to a phone — after Hurricane Sandy shut down all of lower Manhattan in 2012, leaving us stranded without heat or power.

Here in Richmond, there’s no clearer proof of the enduring power of restaurants than the present. A large number of dining establishments, while confronting an existential crisis of their own, have persisted, despite this global pandemic, in serving their communities as a source of comfort and connection. For now, they’ve managed to work through innumerable constraints, mostly government mandated, and find creative ways to alter their business models — and sometimes even their menus — in order to offer contactless takeout and delivery as a viable dining alternative.

Sure, concepts like “curbside pickup” — staying seated in your car while servers shove tinfoil boxes of food through your car window — can make it seem as if we’ve entered some dystopian future, full of people moving about on hoverchairs, like in the movie “WALL-E.” And there’s no question that restaurant owners would prefer not to be forced into making such changes at all; most are simply fighting to survive (and doing so without adequate relief from the government).

Yet, in pressing onward, restaurants are showing now, just as before, that they can be strong, that they can be resilient, and that they can be adaptive. Around town, restaurants, responsive to the needs of their communities, have devised a range of innovative dining options. In addition to Richmond restaurants doing a la carte takeout and delivery, some places, such as Secco Wine Bar in the Fan District and Brenner Pass and Perch in Scott’s Addition, have even composed entire multicourse feasts that can be comfortably enjoyed back at home.

Such movable, multicourse feasts have brought many of the joys of fine dining into my dining room. The five-course couple’s menu ($60) from Secco was a wholly sumptuous affair, with a choice of two of the restaurant’s antipasti, two share plates, dessert and a bottle of wine.

I must confess, I’d long entertained devilish thoughts of making off with an order of chef Julie Heins’ Spanish tortilla, the first of our selections, since takeout from Secco had previously never been an option. Each wedge, with a shiny polish of olive oil and dusting of paprika, had an architectural elegance to it. Fashioned into a mosaic were sliced potatoes, loosely bound together with egg, that evoked the cross between a latke and custard pie.

My husband and I paired this with the fried chickpeas, another of my favorite small plates from Secco. The chickpeas, so snackably salty and laced with Aleppo pepper, were ideal for grabbing by the palmful between bites of Spanish tortilla. Add in the bottle of Catalan cava that had been bestowed upon us, and we had ourselves an impromptu tapas hour.

We were quite content to keep the rest of our Mediterranean feast vegetarian. The risotto, a verdant array of asparagus twigs, pea shoot tendrils and thinly shaved lemon seated on a cushion of arborio rice, presented us an uplifting vision of spring. Meanwhile, veering as close to vegetarian charcuterie as they come were roasted fingerlings, cipollinis, Brussels sprouts and beets, mired in a thick plot of harissa yogurt. For dessert were horseshoe-shaped churros covered from head to toe in sugary sparkledust.

Like Secco, Brenner Pass doesn’t usually offer food to-go. It should come as no surprise that, upon being driven to adopt a takeout-only business model, this James Beard-nominated restaurant would come out swinging, with a menu that captured the feeling of a full-blown holiday banquet.

The restaurant’s generously sized menu for four ($60) came with a centerpiece of our choosing — which, for us, was a whole roasted chicken, carved to serve — and festive sides of roasted broccolini and a creamy dauphinoise of sunchokes.

If you want to test your capacity for delayed gratification, try driving 15 minutes home with the garlicky vapors of chef Brittanny Anderson’s chermoula, which accompanies the chicken, wafting through your car. Anderson’s version of this sauce — an infusion of parsley, garlic and olive oil, embellished with crushed pistachios and teased with lemon and cumin — hugged the caramel-brown skin of the chicken like moss on a tree.

As with any holiday banquet, we made room for dessert. The bread pudding was a centerpiece in its own right. Interlocking cubes of brioche were studded with golden raisins, candied orange peel and softly baked apples, then slathered in caramel. The end result: Italian panettone meets old-fashioned apple pie.

Meanwhile, at Perch, chef Mike Ledesma has kept his laid-back and approachable style of cooking, riffing on those pan-Pacific and Southern influences that are Ledesma’s culinary calling card.

Of course, multicourse menus aren’t the only ways to enjoy some comfort and connection during this period of social distancing. There are myriad other dining experiences that can be had at restaurants around town — from homey guisos (Mexican stews) at Abuelita’s, vibrant curry pots at Nama, to heartwarming burgers at Laura Lee’s; from rib-sticking pasta dishes at Joe’s Inn, summery lobster rolls at Grisette, to fire-in-your-belly Sichuan at Peter Chang’s. The list goes on, so I’d strongly encourage you to check the comprehensive roster of dining alternatives on Richmond.com for more ideas.

These experiences will not only benefit you, but also local dining establishments themselves, many of which are struggling in their decision to stay open at reduced capacity. In fact, at the time of this writing, Secco, one of the places detailed above, has closed for the time being, along with numerous other Richmond restaurants. Many more are likely to follow suit.

In the same way that restaurants have been and still are here for us, supporting them in this moment — by ordering takeout or delivery — is a way of being there for them as well. After all, just because we’re socially distancing doesn’t mean we can’t somehow furnish comfort and connection to one another in other ways.