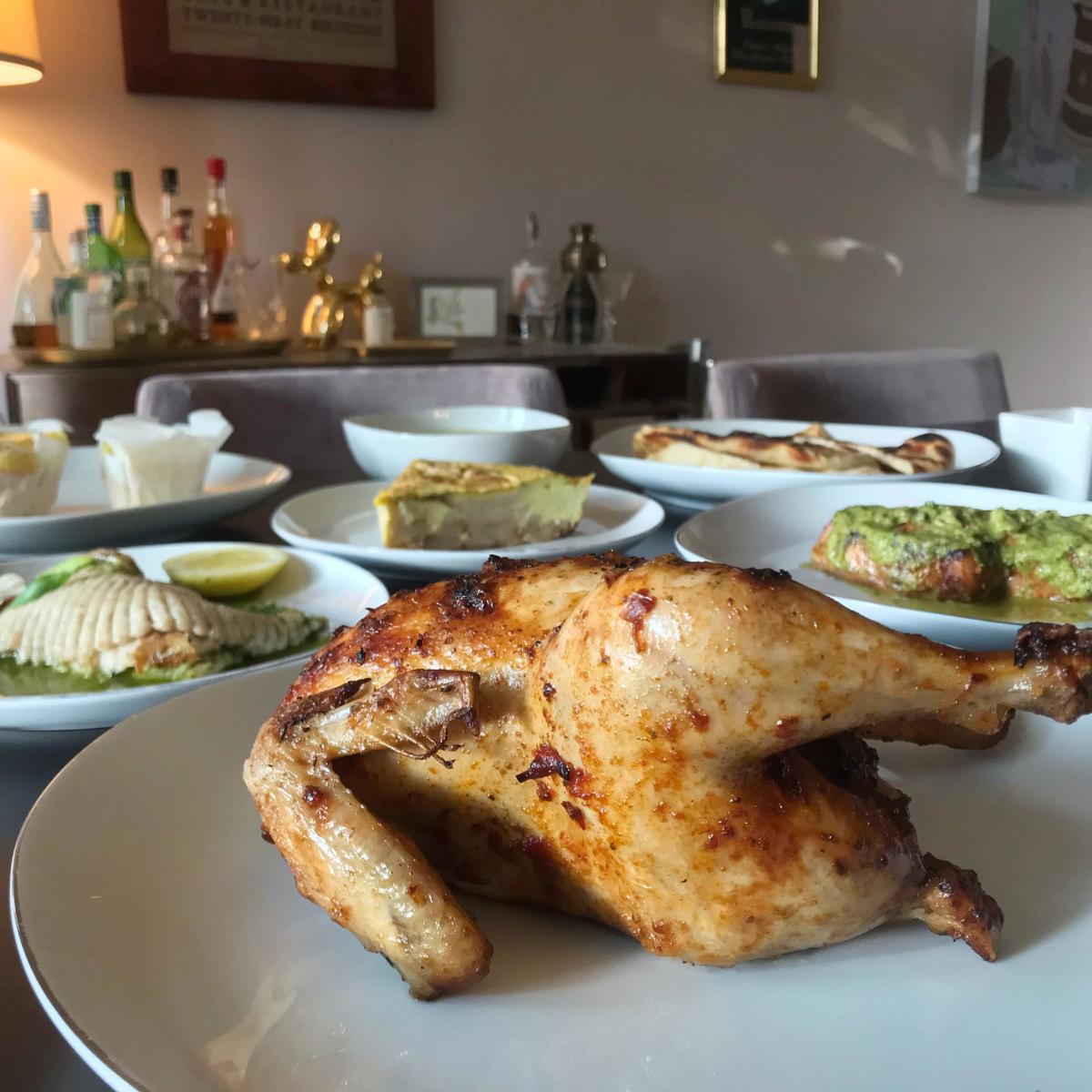 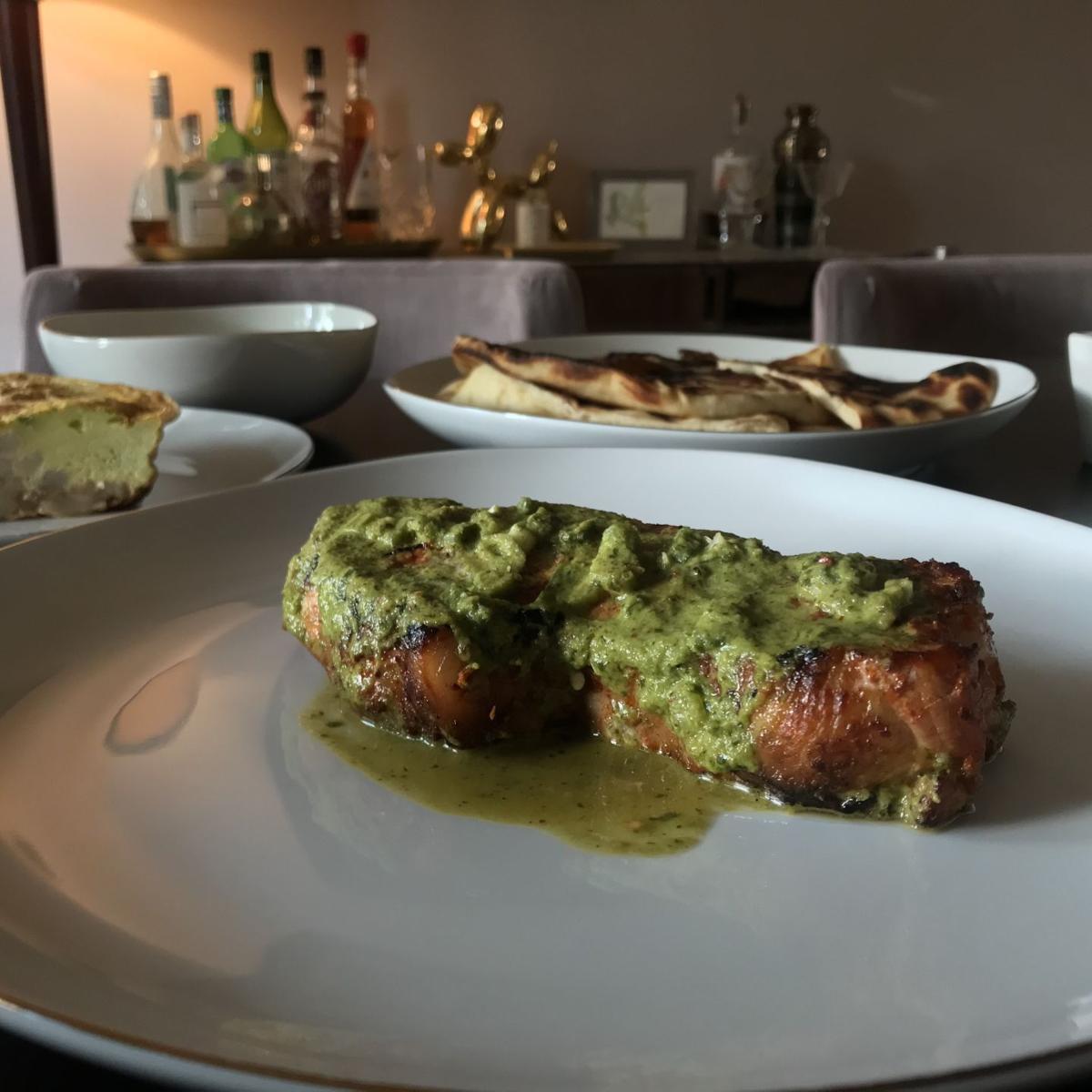 The pork chop with ramp chimichurri -at Longoven’s Brasa pop-up. 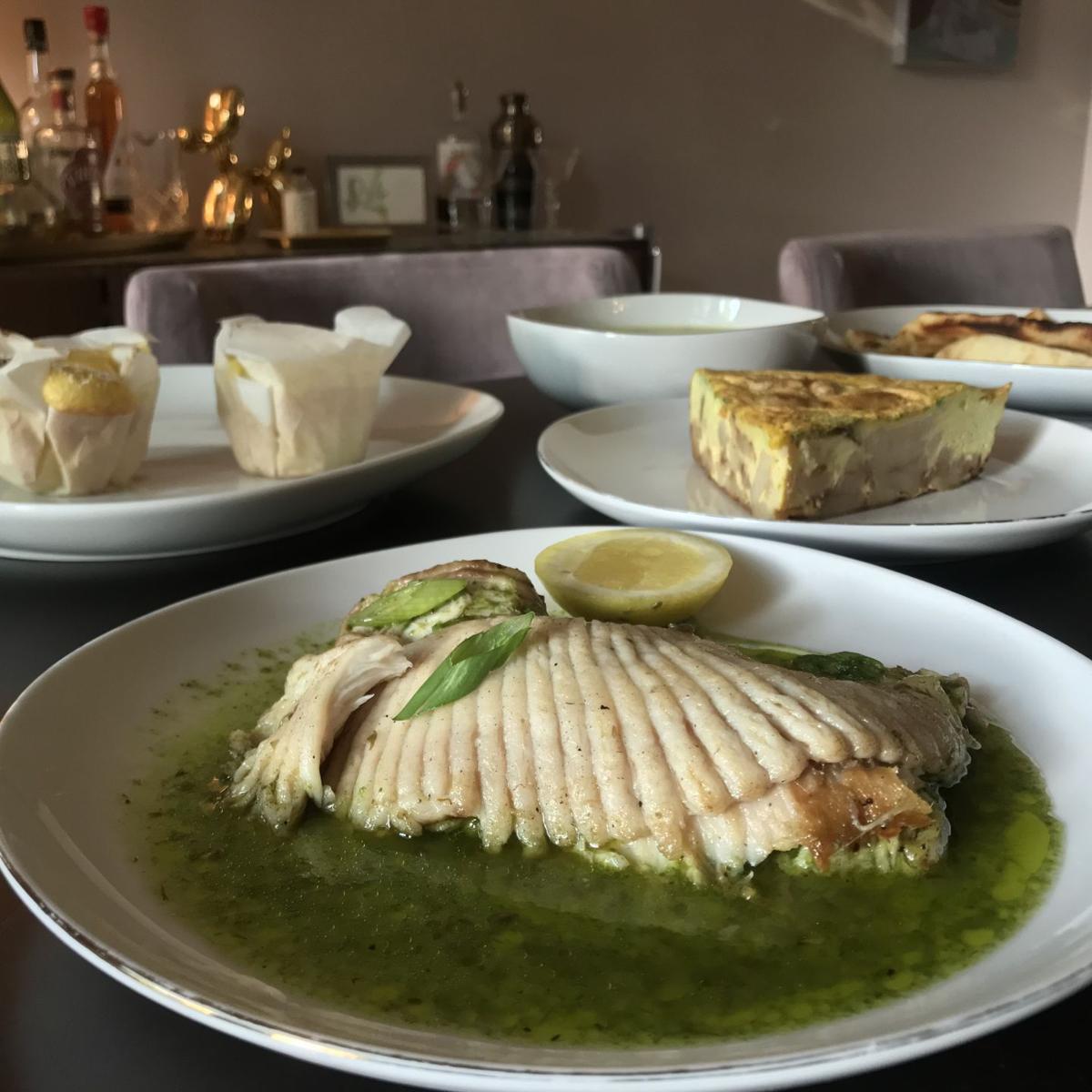 The skate wing with ramp chimichurri at Longoven’s Brasa pop-up. 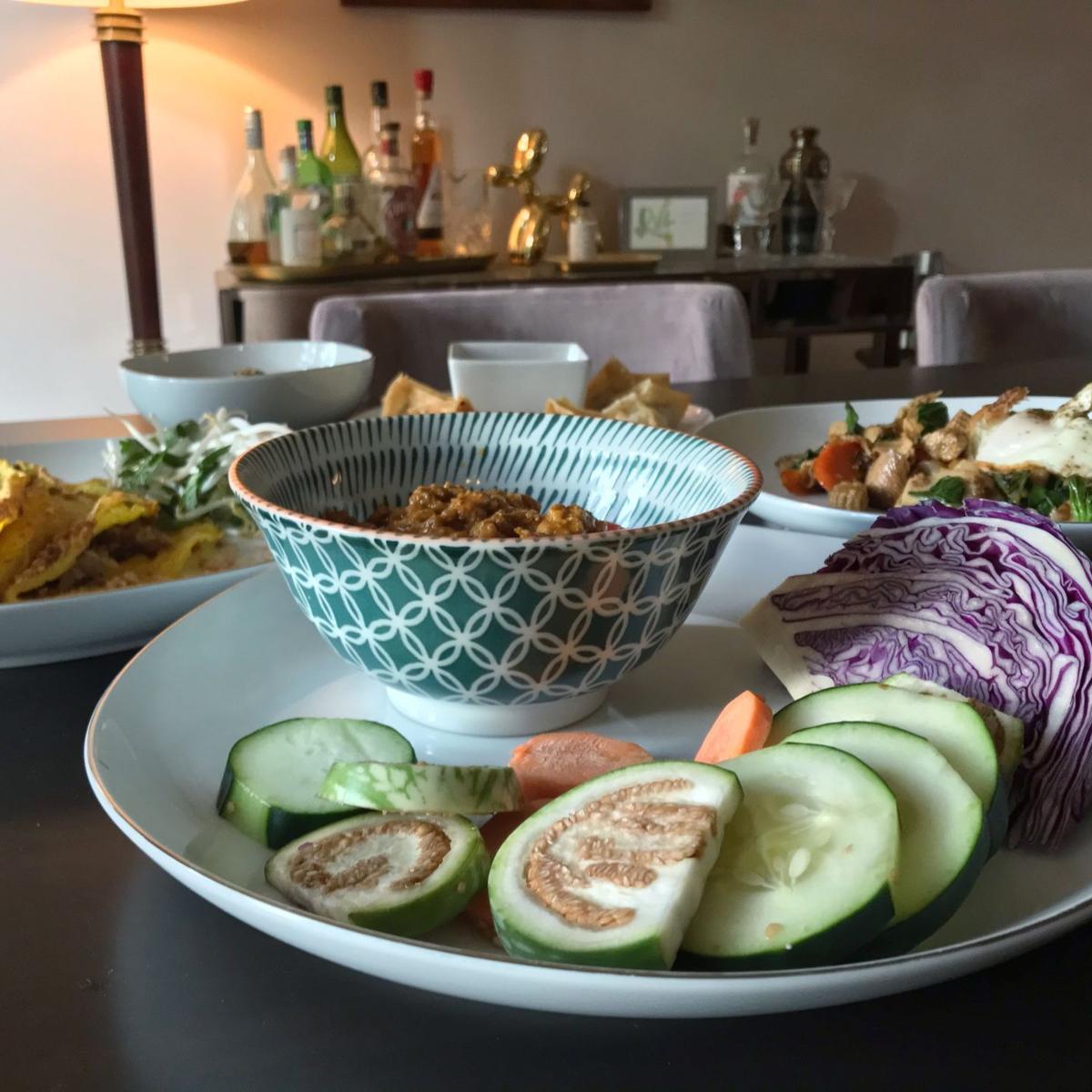 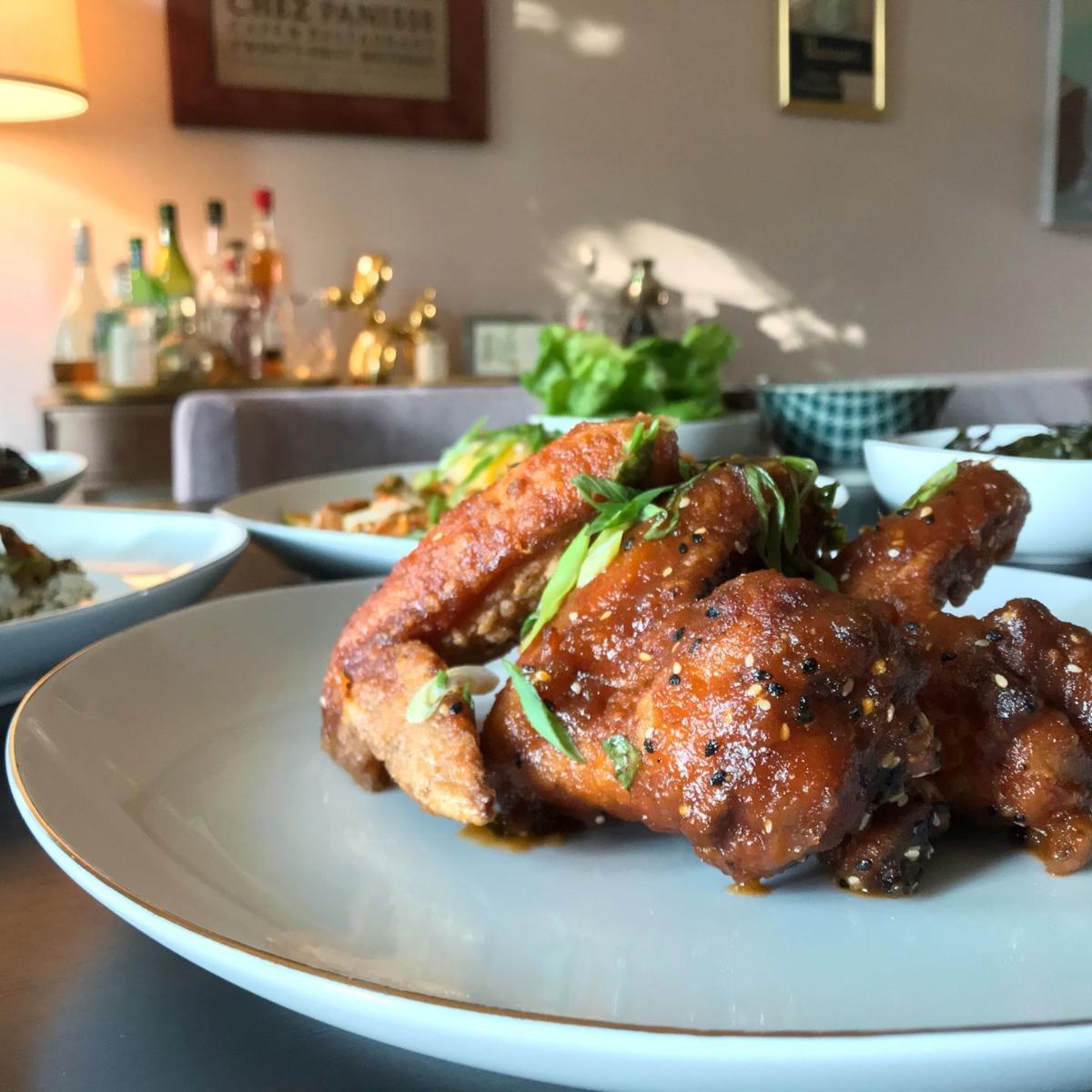 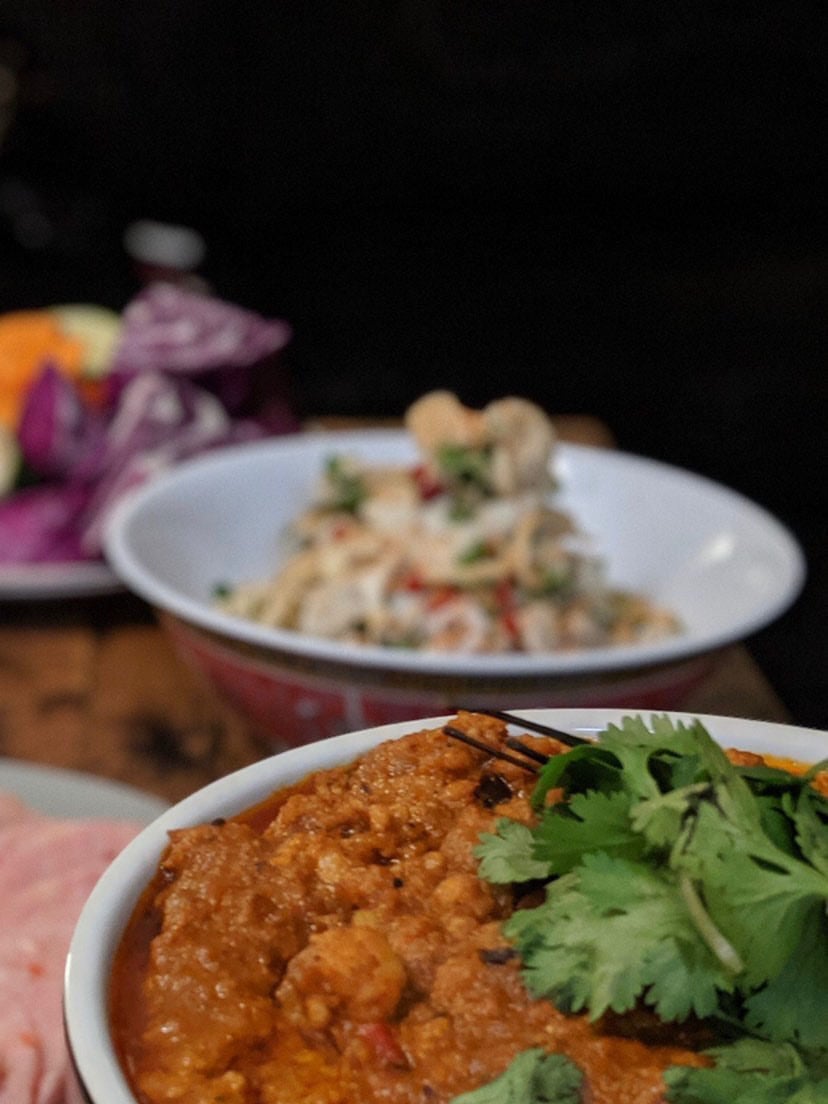 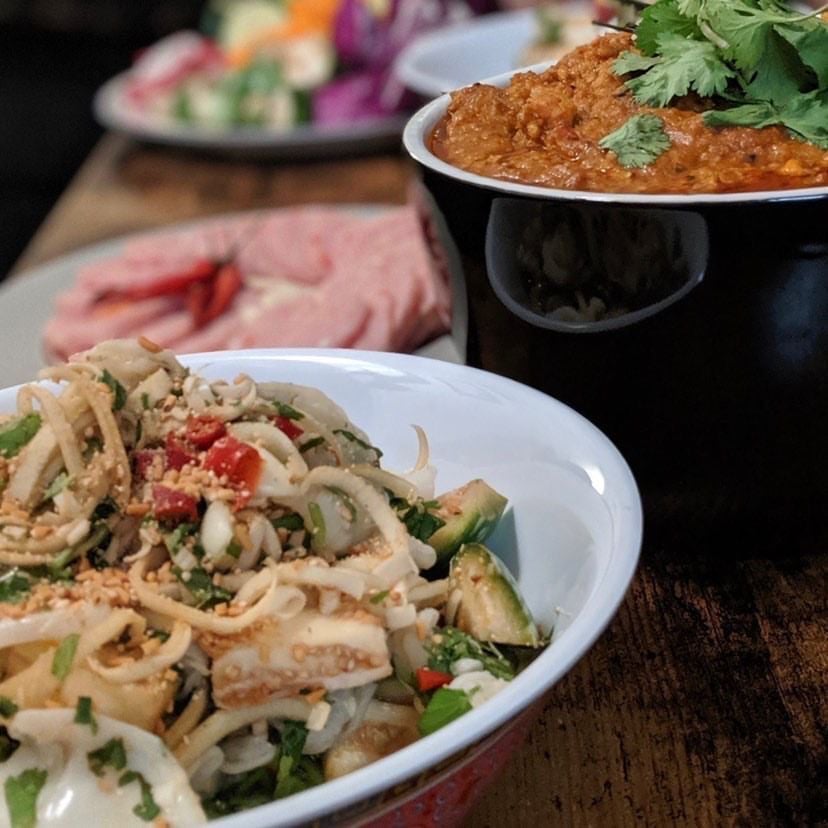 “The beauty of a pop-up,” Longoven’s Patrick Phelan observed, “is that it’s just this moment in time, and you can move through it without a whole lot of rules. And it kind of fits the environment that we’re in right now.”

Though pop-ups were popular before the recent coronavirus outbreak, this concept is particularly conducive to the world we’re in now. The pop-up answers many questions that chefs and restaurant owners have been asking themselves: how do I respond to changing conditions and expectations? How do I still produce inspiring dishes, while minding decreased economies of scale and invariably higher food costs associated with a takeout-only business model? How do I keep diners engaged and excited about what is essentially dining-in dining out?

While Vanna Hem and Adam Stull, like others in the industry, were forced to pivot in response to the outbreak, their experience running their Cambodian-themed pop-up Royal Pig has prepared them in certain ways for this period of change and uncertainty.

“We’re very versatile. We’re able to adapt to change. Each one of our pop-ups is fairly different. … And we’re used to cooking wherever we can,” said Stull. If the situation demanded, Hem added, they could “probably put out a whole kitchen in our backyard.”

The two of them are as much chefs as they are traveling showmen. The last year, they’ve staged performances of Royal Pig all over town, from a family-style variety show at The Broken Tulip to an intimate cabaret of plated dishes at Secco Wine Bar. The pair have roved from kitchen to kitchen, for one or two nights at a time, showcasing the humble pageantry of dishes that Hem’s family, refugees to this country after the Vietnam War, made for him growing up.

Hem and Stull are accustomed to reworking their menu, which combines traditional Khmer dishes with modern cooking and plating methods, to fit whatever venue they’re in. Their recent takeout-only adaptation of Royal Pig at Bingo Beer Co. in May exhibited the talented duo’s versatility.

Coarse-ground pork belly ($12) was spun into a spicy, offbeat infusion of lemongrass, kaffir lime, and ginger made for spooning into your mouth with red cabbage or slices of cucumber, carrot, and spongy Thai eggplant. Think: Cambodian bagna cauda.

Ghostly coils of squid and shrimp whistled with fresh mint and cilantro and shrieked with lime juice and arcs of red onion. This ceviche ($12), Hem noted, happens to be his favorite birthday dish.

Meanwhile, folded into sunny yellow bahn xeo ($11) was a savory-sweet filling of pork caramelized with palm sugar and toasted coconut. The “sizzling pancakes,” as they’re described, were eggy enough to be a breakfast omelet, but just pocked and spongy enough to be mistaken for Ethiopian injera.

“It’s rustic, peasant food,” said Hem about the dishes they feature at Royal Pig. “But as with any other culture, peasant food is … very flavorful and enjoyable for tons of people.”

During the pandemic, an increasing number of existing restaurant owners, largely in the fine dining realm, have gone the pop-up route as well. They’ve taken sharp detours from their regular menus to explore completely new and creative ideas — such as playful odes to chain food by Alewife, patio burgers and lobster rolls from Grisette, Jersey subs and red-sauce Italian fare at Heritage, and Metzger’s throwback to the classic American steakhouse.

For Thomas Owens of Saison, a Korean-inspired pop-up was a break from the constraints of pandemic cooking. “The fact that we’re open and just cooking sandwiches all day, it’s definitely a little hard to remember why this is so much fun all the time,” admitted Owens. “So doing something that we can be excited about is obviously great. It shakes up the monotony of our current weeks.”

Owens’ lifelong affection for Korean food began with his father, who served overseas in Korea during the ‘60s. Saison’s chef de cuisine recently set out to learn more about the cuisine through independent research and experimentation. So given the opportunity to stage his own pop-up, Owens landed on “a love song to Korean food from me.”

For his May pop-up, Owens chose to keep the dishes fairly traditional, while finding creative flourishes — including wild green strawberries as garnishes and French techniques for Korean sauces — to sprinkle in here or there. “I didn’t want to be too off-putting as a white man doing Asian cuisine,” he said.

In signature Saison fashion, the Korean dishes that Owens rolled out tasted as bold and colorful as they appeared. For his take on ganjang gejang, traditionally prepared with raw crabs, soft shells ($15) were steeped in soy and fish sauce. They exhibited a little extra funk, showered by pungent flecks of dehydrated onions and black garlic.

Jumbo-sized, double-fried chicken wings ($12) were lacquered with garlicky red chili sauce. The wings had been dredged in a mix of sweet potato starch and rice flour before frying, giving them an unmistakable trace of nutty sweetness.

Bulgogi-marinated hanger steak ($24), charred to a cindery finish, was tender and flavorful, with sharp accents of kimchi cabbage and carrots and rice wine-pickled green strawberries. The steak was to be eaten as a ssam — bundled in pouches of bibb lettuce together with some of the pickled vegetables and a dab of salty, fishy ssamjang, bolstered by Chinese fermented soybeans and black garlic.

One of Owens’ favorite riffs on Korean food that wasn’t on his pop-up menu? Kimchi stew crowned with a piece of seared foie. But diners will have to wait a bit longer for that one. “If we ever get out of this [pandemic],” he promised, “I’ll have it around for sure.”

Phelan and Longoven co-owners Andrew Manning and Megan Fitzroy are certainly no strangers to pop-ups, or “glorified camping, as we used to call it,” said Phelan. Before erecting Longoven’s esteemed temple of plated, modernist cuisine in 2018, the trio was already enlightening the Richmond dining scene through a series of pop-ups at Sub Rosa Bakery, The Veil Brewing Co., and Ardent Craft Ales.

After closing Longoven in mid-March, Phelan, Manning, and Fitzroy knew that, if they were to reopen during the pandemic, it would not be as some form of “Longoven to-go.” So when they did relaunch on May 17, instead of endeavoring to squeeze a square peg into a round hole — or in this case, modernist cuisine into a takeout container — they decided to return to their roots as a pop-up.

Longoven’s new Brasa pop-up centers on wood-fired, Spanish and Portuguese-inspired cuisine. Brasa, meaning “ember” in Portuguese, was a concept that Manning originally developed in 2017, inspired by the 12 to 13 years he’d spent in Europe.

The rusticity of Brasa’s dishes not only translates well logistically for takeout, in terms of preparation and cost, said Phelan. They also reflect a culinary approach — “a quickness with fire,” as he put it — that speaks deeply to Phelan and Manning as chefs.

Cooking over a blazing fire, contending with hot zones and continually moving ingredients around and feeling them, is “just a kind of primitive way of interacting with food that I think you lose some days in the modern, sterile kitchen of water baths,” he said. “It’s just a fun way to cook.”

Recently, at Brasa, whole chickens ($25) got a full-body rubdown with punchy, peppery piri piri. The juicy, copper-toned birds, hung like laundry directly over the fire, were awash in the fragrant smoke of red oak.

Grilled pork chops ($18) were tinged red like bricks in a marinade of espelette peppers, paprika, and oniony hot sauce and slathered with extra-perky ramp chimichurri.

And cooked on a cast iron pan, bedded over hot coals, were angel’s wings of skate ($18) that had been gently lifted by a heavenly breeze of tarragon, pureed in olive oil with other spring herbs.

Brasa’s connection to fire — and the quest to tame it — somehow feels symbolic as well, of the trial by fire that Longoven and other restaurants have endured throughout the pandemic. We’ve stood “on the precipice, on the edge of losing everything,” said Phelan. Since Longoven’s return as a pop-up to the dining scene, he and his team have felt a renewed sense of determination. “You just find yourself approaching your work with a level of passion and seriousness — that this is all you’ve got and you better take it seriously.”

Some other popup highlights this month:

Every Wednesday to Saturday

Every Saturday and Sunday

Every Monday and Thursday to Sunday

*Royal Pig and Saison have not announced upcoming dates for pop-ups. For updates, check their social media.

The pork chop with ramp chimichurri -at Longoven’s Brasa pop-up.

The skate wing with ramp chimichurri at Longoven’s Brasa pop-up.