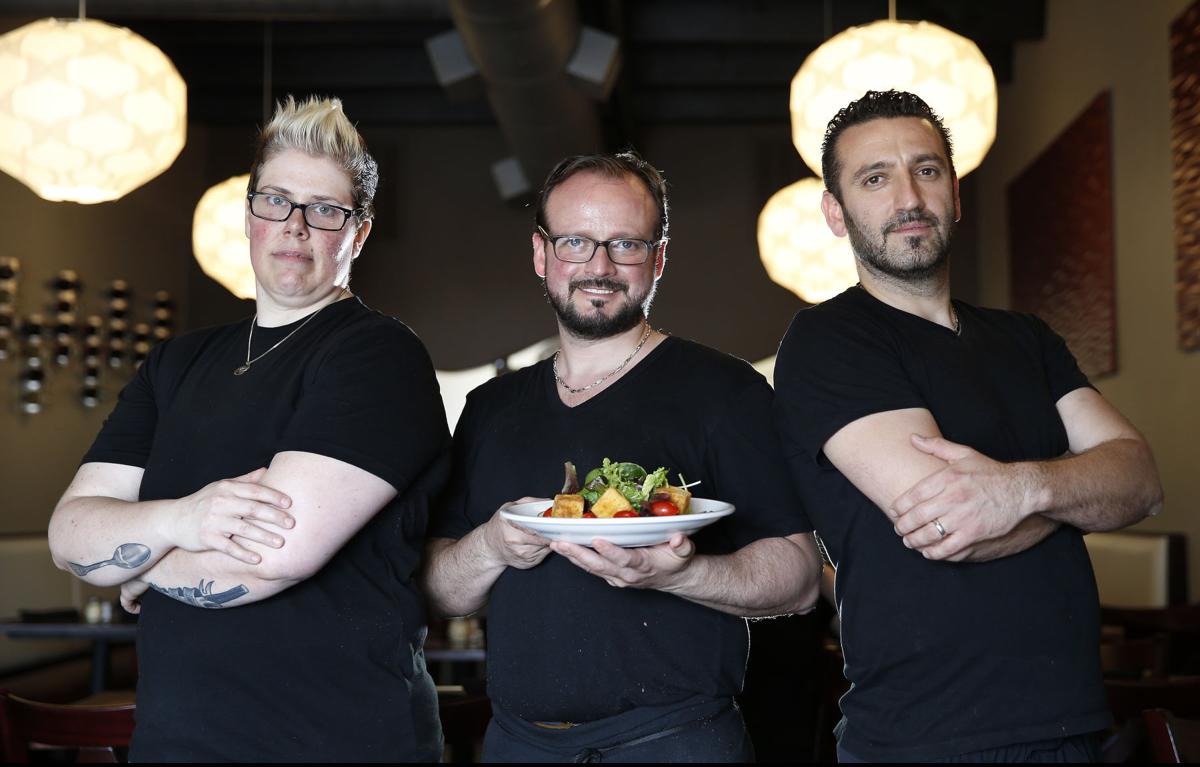 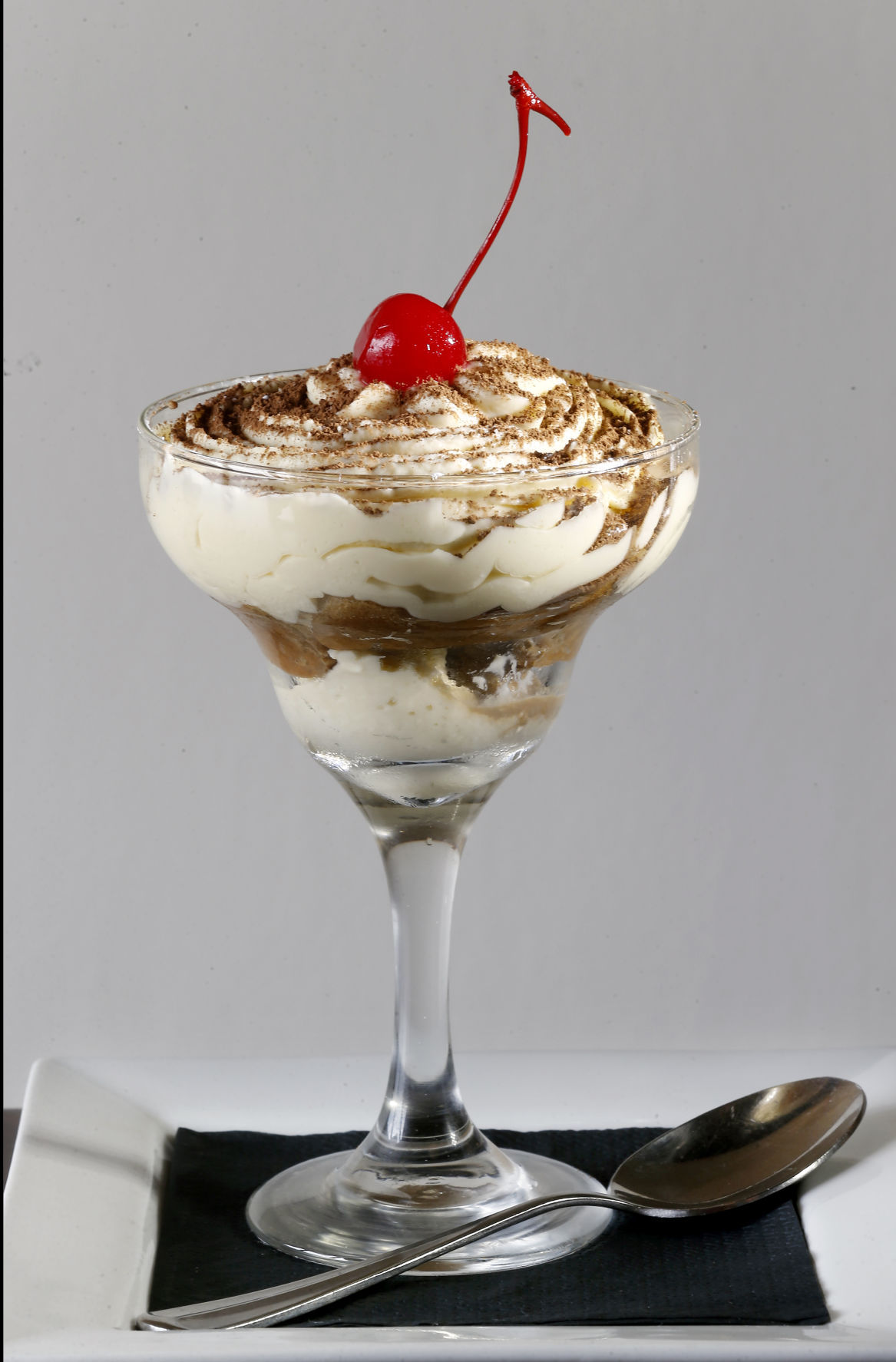 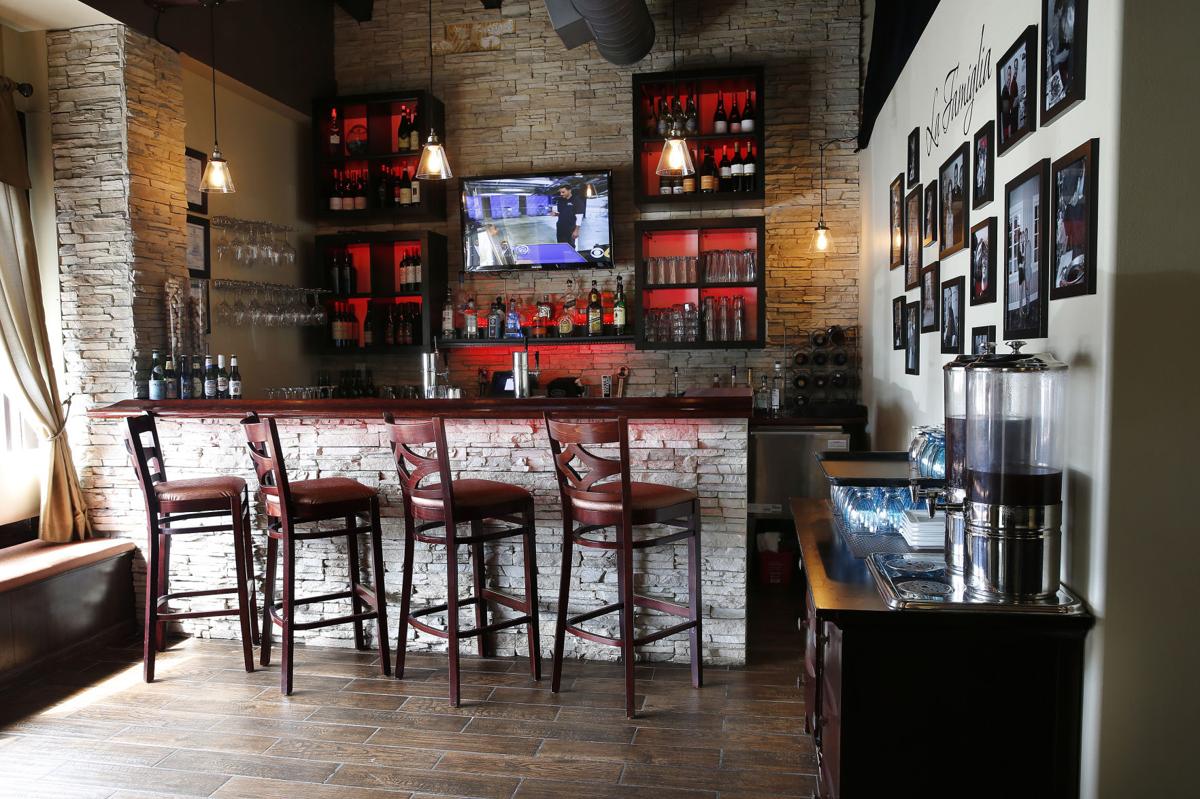 “Every dish is made with love,” says Casa Italiana, which opened in September in the Westbury Shopping Center. 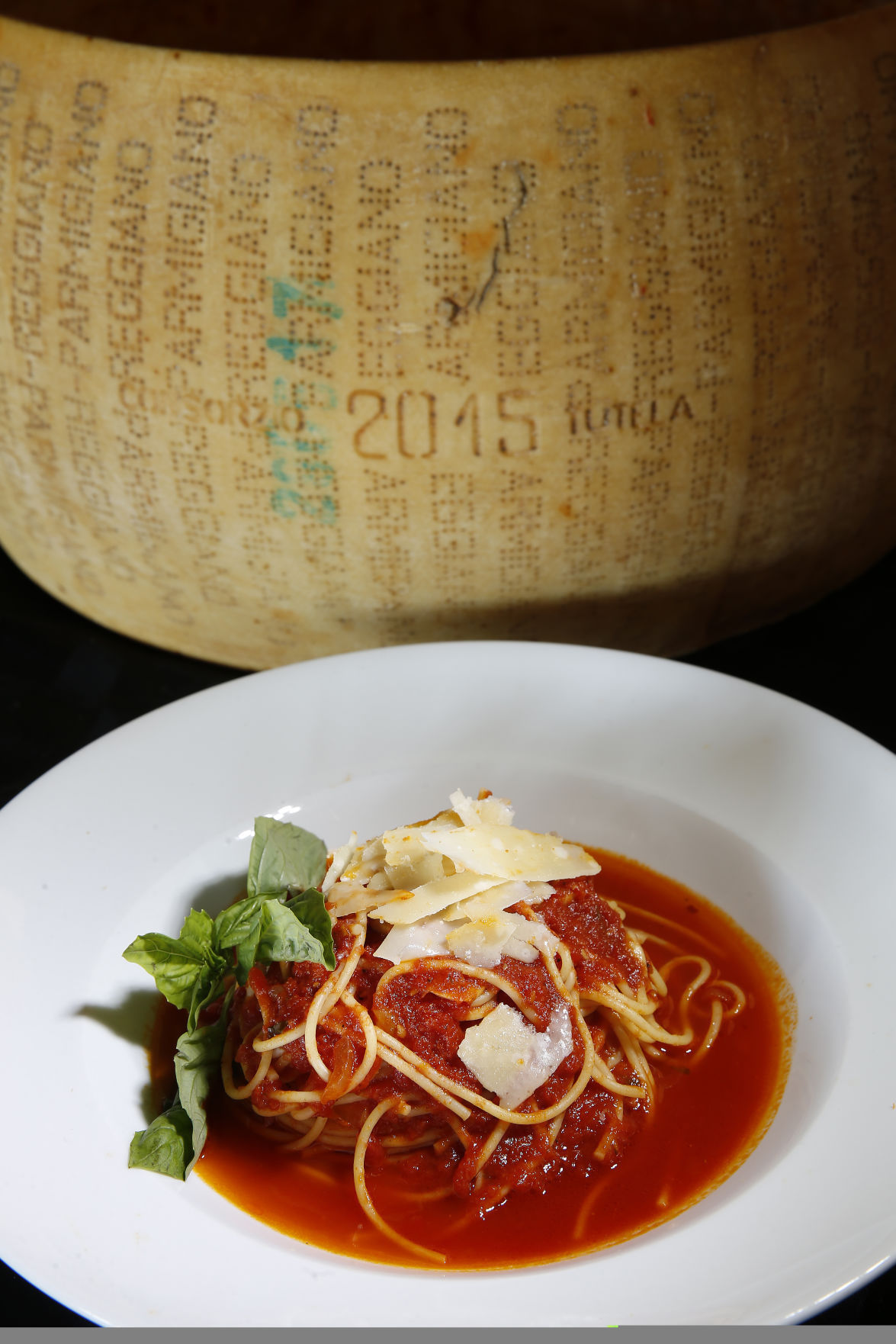 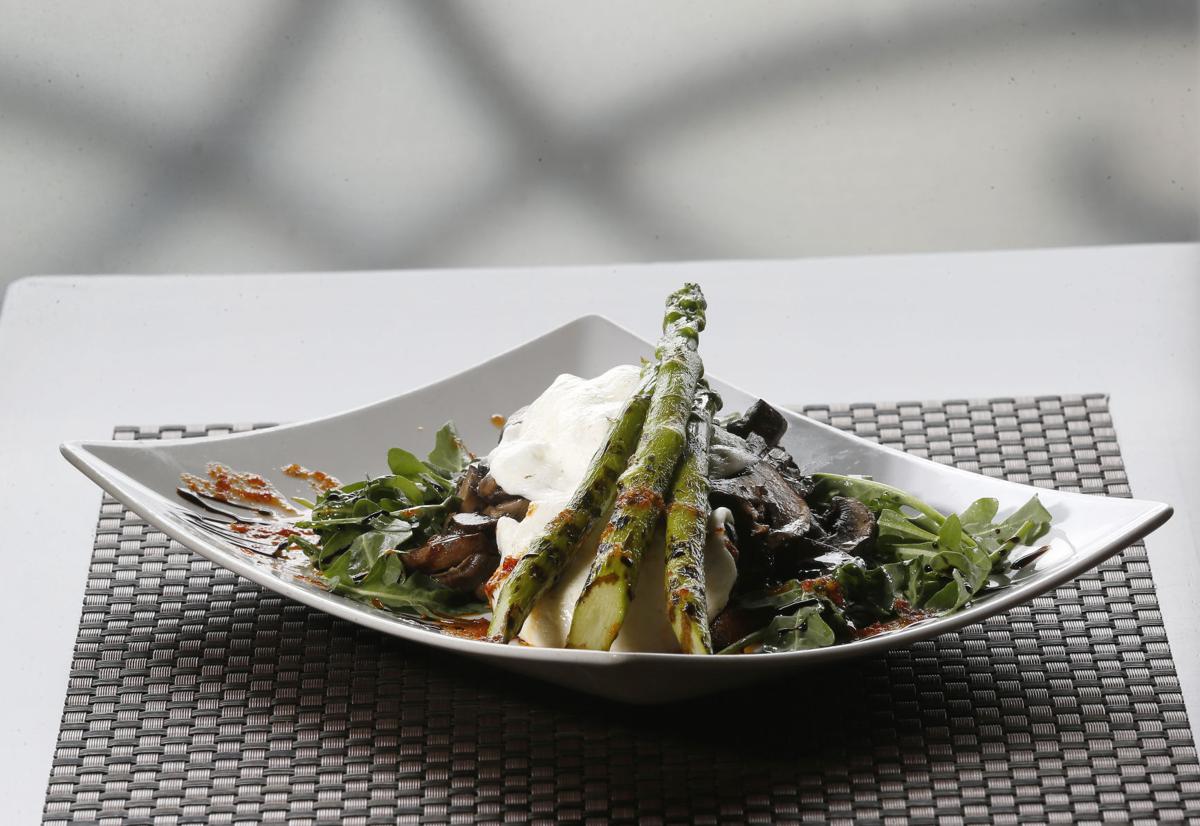 Roasted mushrooms with grilled asparagus, fresh mozzarella, baby arugula and sun dried tomato pesto is an appetizer on the menu at Casa Italiana. Photo was taken on Wednesday, May 31, 2017. 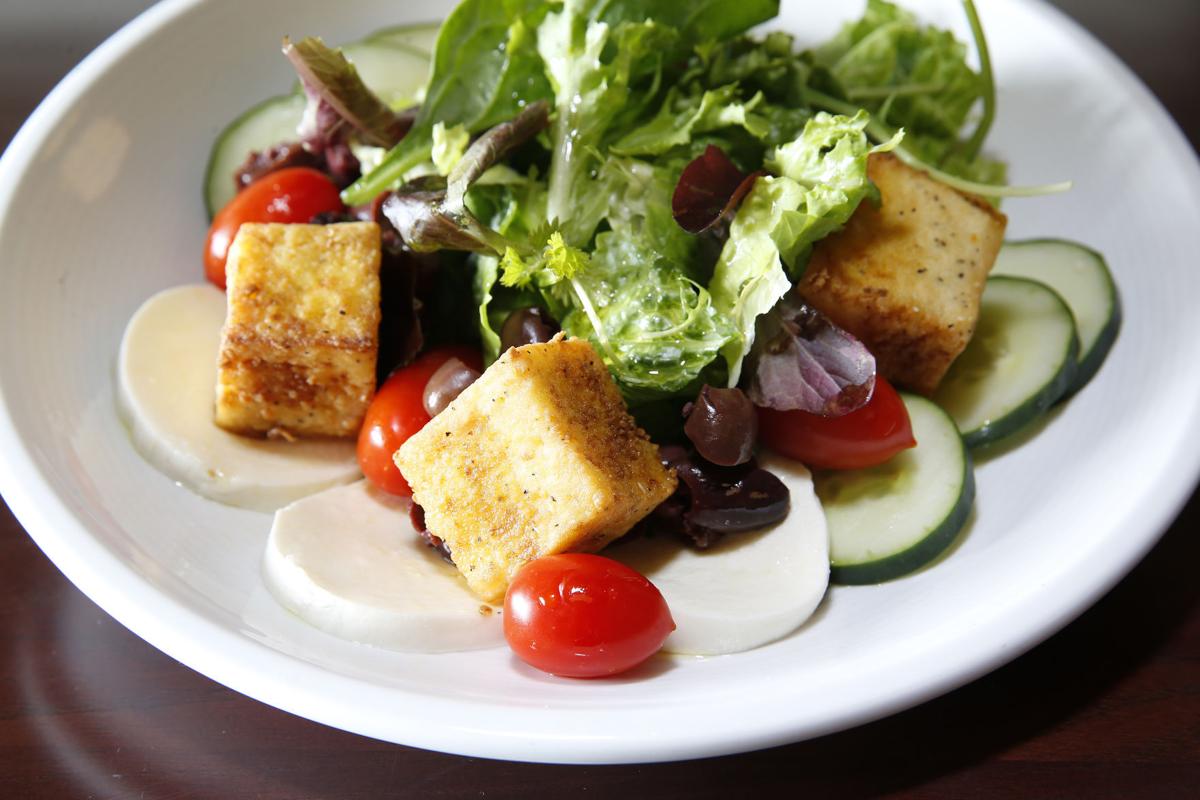 Panzanella salad with crispy polenta, tomatoes, cucumbers, olives, fresh mozzarella and house vinaigrette is on the menu at Casa Italiana. Photo was taken on Wednesday, May 31, 2017. 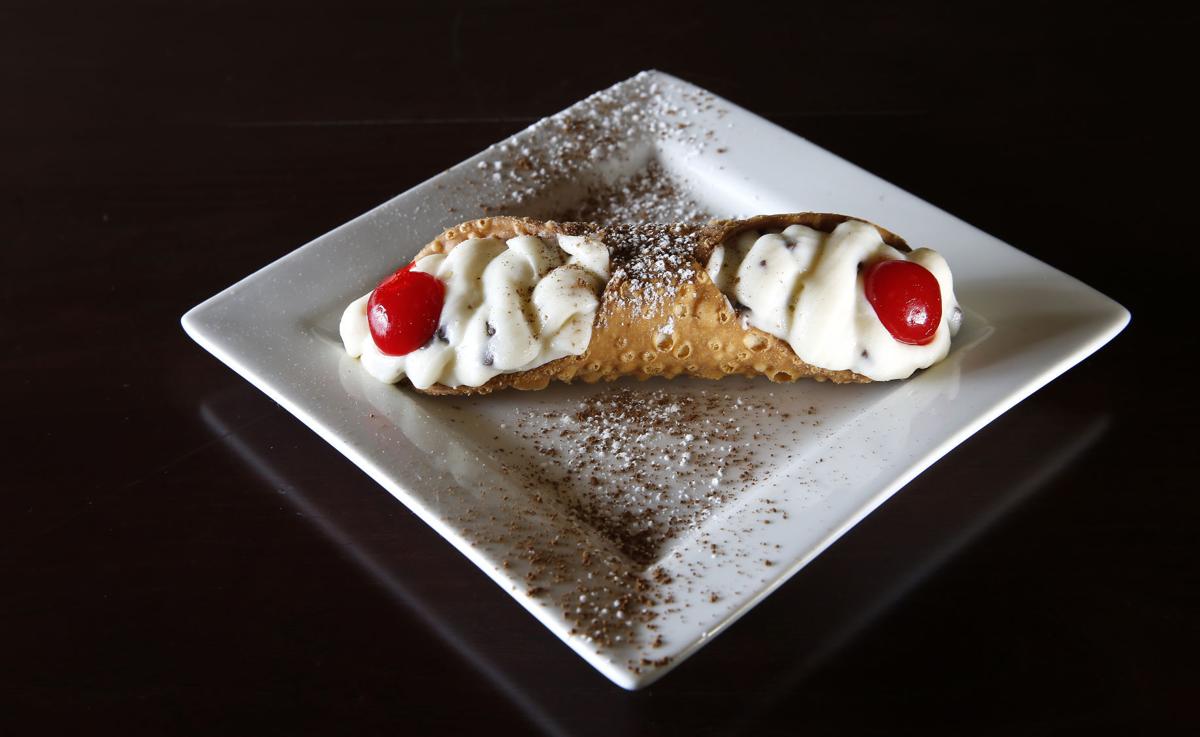 Cannoli at Casa Italiana are made with shells imported from Italy and a housemade filling.

There’s a lot to like in this small restaurant in an equally small shopping center: the interesting concept, which it plays out well; the personal touch that comes from family-owners working throughout therestaurant; and even a food-television reality star managing the place.

Let’s talk about the concept first. You’ll find the “vecchio” (Italian for “old”) portion of the restaurant’s name in many of its dishes, including its traditional bruschetta and the lasagna made according to the family’s grandmother’s recipe. The “nuovo” (“new” in Italian) is well-represented, too — whether the kitchen is changing up a classic Italian bread salad by substituting polenta for the bread or keeping its traditional tiramisu dessert recipe but serving it, unexpectedly, in a margarita glass.

Then there’s the Spaghetti al Formaggio, which is out-of-the-box enough to be in its own category. (More on that later. Let’s just say that it involves a cheese cask, brandy and an open flame.)

On a recent night, dinner began with a warm bread basket with croissants sliced in half and grilled along with housemade tomato focaccia bread, both enjoyable for nibbling while waiting for appetizers.

The Panzanella Salad ($8) arrived next. In a twist on the classic Italian bread salad, fried polenta replaced bread. Crisp lettuce was topped with tomatoes, cucumbers, olives, fresh mozzarella and fried corn polenta, which was crispy on the outside and soft on the inside. The lemon vinaigrette dressing provided a bright contrast to the milder corn flavor of the polenta.

Next came the Signature Casa Meatball ($6), a single large meatball made with ground beef, ground veal, herbs and Parmesan cheese. It came with a wonderfully sweet tomato sauce that was obviously homemade (as are all of Casa Italiana’s sauces), shaved pecorino cheese on top and grilled bread. The meatball had a savory, garlicky-meaty flavor and a soft consistency.

The Roasted Mushroom pizza ($10) from the menu’s handful of small grilled pizzas started with a crispy housemade dough. Béchamel sauce provided a creamy flavor and truffle oil a mushroom-y one; the fresh baby arugula on top added a contrasting peppery bite.

In the Chicken Milanese ($15), a Northern Italian dish, a chicken breast was lightly fried in a bread crumb-Parmesan cheese coating. It was topped with fresh baby arugula, aged Parmesan cheese and lemon vinaigrette. The dish was tasty but not as big a hit as our other entrée, a spaghetti-and-cheese dish, which was the highlight of the evening.

That dish was the Spaghetti al Formaggio ($15), which is not an entree, but an experience. Rather than being a traditional Italian creation, one of the owners saw it done in Aruba and brought it back to Richmond with some changes here and there.

Here’s how it works: At a central table in the restaurant, a server takes a mostly hollowed-out cask of 5-year-old imported Italian Parmesan cheese and pours in flaming brandy, which melts the cheese before the brandy burns out. Then another server comes from the kitchen with spaghetti and tomato sauce, which are poured into the cask and mixed with the melted cheese.

The spaghetti, served in a bowl with sprigs of fresh basil, had the sweetness of the tomato sauce, the earthiness of the brandy and the saltiness of the cheese. It also had the approval of the crowd, which applauded in delight.

There are no desserts printed on the menu at Casa Italiana, so ask your server for the night’s specials. With the tiramisu ($6), the restaurant stayed with the traditional recipe of ladyfingers dripped in coffee and layered with sweet custard. It was light and airy on first bite, and finished with lingering flavors of cocoa and coffee. The cannoli ($6) was also made according to tradition, with shells imported from Palermo, Italy, and a housemade filling of ricotta cheese, sugar, vanilla and chocolate chips.

The restaurant is owned by a trio of family members plus one honorary family member. Executive chef Gaetano Genova came to the U.S. from Italy at 16 years old. His brother, Filippo, also a chef, followed him here. Filippo’s wife, Annalisa Volo-Genova, manages the front of the house. So does Kristi Ritchey, a longtime friend who was unofficially adopted into the family in her teens. (If she’s working the night you come in, she’ll be hard to miss: Look for the black glasses, spiky hair and big personality.)

Ritchey lived in California for a while, making a name for herself as a chef and appearing in 2011 on NBC’s “The Biggest Loser.” That same year she also appeared in an episode of the Food Network’s “Extreme Chef” and talked about her love for the food traditions of her family of chefs back home, referring in part to the Genovas.

You’ll find Casa Italiana in the Westbury Shopping Center, where it opened in September 2016. “Every dish is made with love,” says its website and that sentiment comes through in the food. When you’re there, it’s a little like being welcomed to a big Italian family meal. Buon appetito!

Freelance writer Jo Lord is a former server at a variety of restaurants and a lifelong food lover. The Times-Dispatch pays for the meals in her unannounced visits to restaurants. Contact her at jlord@timesdispatch.com. Follow her on Twitter @Jo_Lord_Copy.

Open for: dinner seven days a week, lunch Monday through Friday, and brunch on Saturday and Sunday

Ideal for: Friday night out with the family

Best seat in the house: Table 10, where you can see both the dining room and the rush of servers coming in and out of the kitchen. (Plus it’s the best table for watching the restaurant’s signature Spaghetti al Formaggio being made.)

“Every dish is made with love,” says Casa Italiana, which opened in September in the Westbury Shopping Center.

Roasted mushrooms with grilled asparagus, fresh mozzarella, baby arugula and sun dried tomato pesto is an appetizer on the menu at Casa Italiana. Photo was taken on Wednesday, May 31, 2017.

Panzanella salad with crispy polenta, tomatoes, cucumbers, olives, fresh mozzarella and house vinaigrette is on the menu at Casa Italiana. Photo was taken on Wednesday, May 31, 2017.

Cannoli at Casa Italiana are made with shells imported from Italy and a housemade filling.