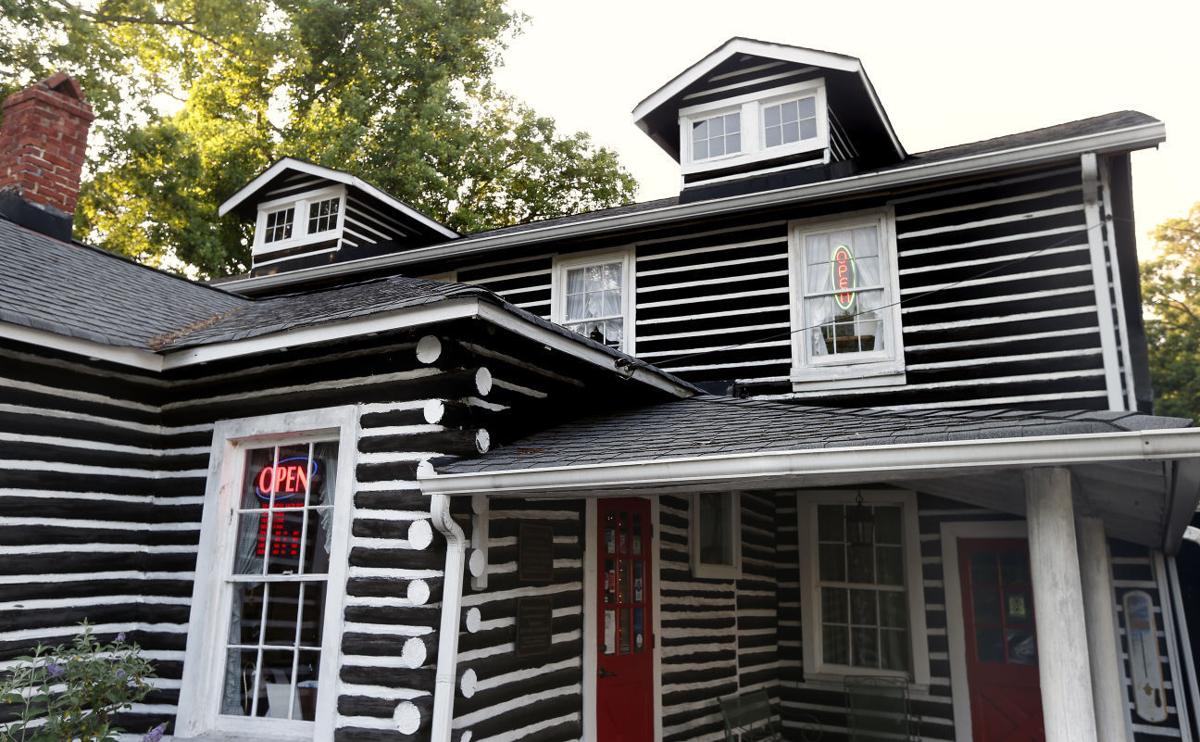 Tanglewood Ordinary, which is as much about the experience as it is the food, is doing takeout now — a first in 34 years. 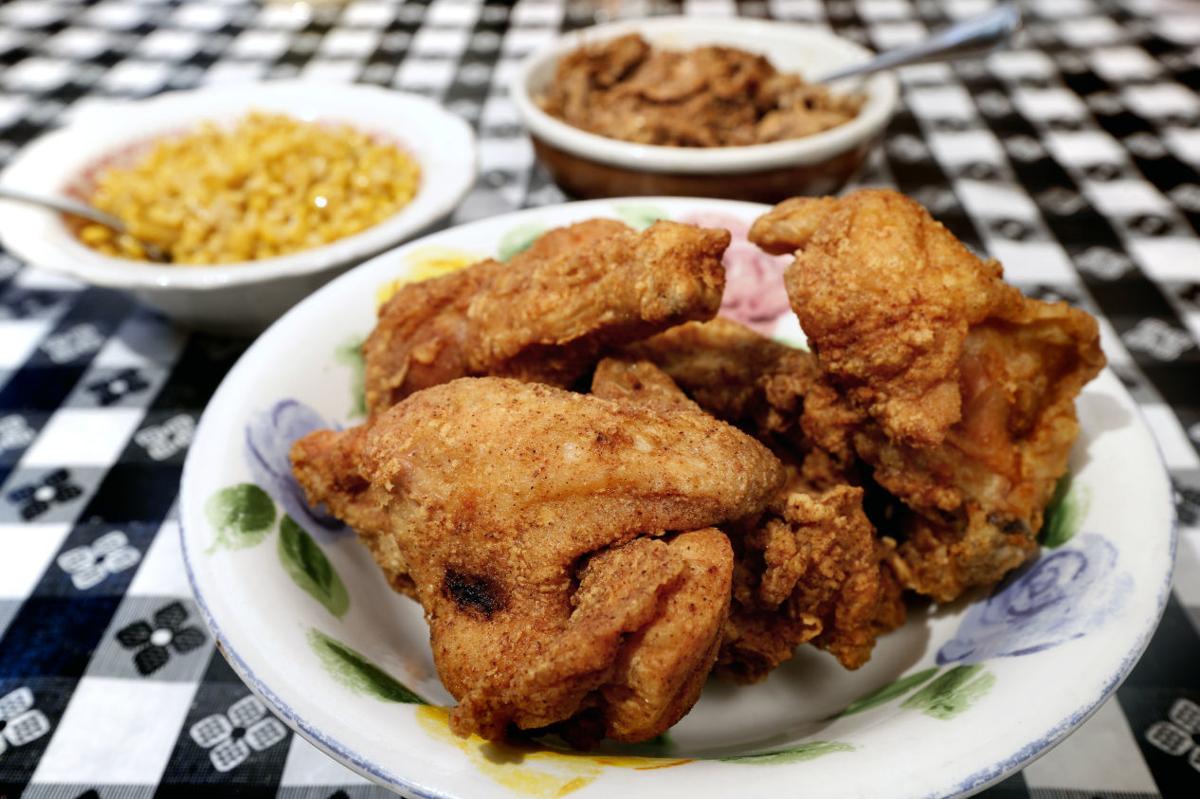 Tanglewood Ordinary, which is as much about the experience as it is the food, is doing takeout now — a first in 34 years.

Tanglewood Ordinary sits like a time capsule on the edge of state Route 6 in Goochland County. The building, a rustic log cabin erected in the 1920s, has served many purposes over the years — service station, convenience store, country dance hall during Prohibition — until Anne and Jim Hardwick bought the place in 1986.

Within its walls, the Hardwicks have erected a reminder of simpler times, a time when detours down unfamiliar back roads held promise of warm family-style suppers. They were inspired by the way Jim remembers eating at his grandmother’s house in Dublin, Virginia, as a kid — bowlfuls of comfort food set at the center of your table, coupled with down-home Southern hospitality.

Generations of diners have been coming to Tanglewood. It’s easy to see why. Much like their restaurant, the Hardwicks are salt-of-the-earth, generous people, with a geniality that can easily lead to hourslong conversations, like the one I had with them. “We just decided to run [Tanglewood] like we wanted to be treated when we went into a restaurant,” Jim says.

Closing their doors to the public in response to the outbreak of COVID-19 was never a decision the Hardwicks imagined they’d have to make. But for Tanglewood and other longtime establishments, these are unprecedented times, ones that require evolving in ways they’ve never had to before. And when one has been doing things a certain way for decades, change doesn’t necessarily come easy.

Tanglewood Ordinary wasn’t designed to be a takeout restaurant. Contactless pickup and online ordering are somewhat antithetical to what Tanglewood is all about. “It really is as much about the experience as it is the food,” Anne explains. “It’s the people. It’s the historic building.”

But since the outbreak, the Hardwicks have forced themselves to adapt. Tanglewood’s last day of dine-in service was March 15. They quickly decided to offer their family-style suppers to-go ($17.49/person), at first by phone and then through an online ordering system. A sign out front reminds customers to stay in their cars. “It’s a whole new way of doing business,” Anne admits, noting that takeout is a first for them after 34 years.

In fact, it took Anne nearly a week to get Tanglewood’s online system off the ground. “There were some days I thought I was going to tear my hair out,” she says, laughing. Jim recalls seeing his wife “on the phone sometimes for two or three hours at a time.”

These days, it’s comforting to know one can still cozy up to a bundle of Tanglewood’s homestyle fried chicken, even while staying at home. The life-affirming quality of a fried drumstick, held like a corn cob between your fingers, is undeniable. Leave the double-frying, the brining, the battering and the sauces to other chicken shacks. Tanglewood’s is as classic as they come. It’s an ode to Southern simplicity, just like Tanglewood. The chicken dons a thin, crispy veil of breading that frames but doesn’t overwhelm the beauty of the meat — “like a pretty girl wearing a scarf,” quips Jim.

And, of course, no display of Southern comfort is complete without the fixings. Biscuits and cornbread brim with grit and tenderness. Coleslaw is innocently sweet; mac ’n’ cheese, thickly crusted. New potatoes are mashed and chunky, under a torrent of gravy fashioned out of chicken drippings. Boggy collards and turnip greens have been stitched with threads of country ham, while green beans, as soft as overripe fruit, have been left to sit overnight to breathe in all the meaty flavors of salt-cured ham trimmings.

What keeps the Hardwicks motivated is knowing they’re able to furnish a slice of familiar comfort to customers during an otherwise unfamiliar and unsettling time. “The reward for doing it is knowing that we’re keeping people enjoying things,” Anne says. “It’s been a really nice opportunity to serve the community in a different way.”

Over in the Fan District, Helen’s has been making unprecedented changes of its own. The restaurant preserves a rich history, dating back to 1935. At the time, it was owned by Helen Donati, who “ran a rowdy joint,” according to manager Claire Tuite. The restaurant stayed in the Donati family until 1994, when Claire and her parents, Leslie and John, took it over.

For the last 26 years, the Tuites have transformed Helen’s into a quintessential neighborhood spot, combining elements of fine dining with a bar scene popular among the younger set. As Claire puts it, “We introduce beautiful food to 21-year-olds who drink PBR.”

Helen’s also stands as a kingmaker in Richmond fine dining. Just look at the restaurant’s impressive roster of alums, including L’Opossum’s David Shannon and Longoven’s Andrew Manning and Patrick Phelan (as well as Noah Sandoval of two Michelin-starred Oriole in Chicago).

Part of this legacy — one that “never gets told,” as Claire points out — is that Helen’s helped define the modern Richmond restaurant scene. It was one of several female-owned restaurants, along with Stella’s and Millie’s Diner, which, in the ’90s, “really just pushed Richmond to the next level for beautiful food.”

Say what you will about its age; Helen’s has never been one to simply sit around and stagnate. Its menu is constantly evolving. And, as other restaurants were still figuring out what to do in response to the outbreak, Helen’s was one of the very first to close. After dinner service on March 15, it pivoted to taking phone orders for contactless pickup and delivery of food, beer and wine (and, more recently, cocktails as well).

The transition, though, was far from seamless. “We took about a week to 10 days to figure out what we were going to do as far as to-go and that kind of thing,” Claire says. “It’s kind of building from the ground up a little bit. … It’s a completely different operation. … We’ve done pickup, but only here and there. It’s never been where that’s primarily all we do.”

While accounting for cost and transportability, the restaurant still imparts the refined comfort of Helen’s through its limited takeout menu. Its rendition of chicken saltimbocca ($20), a traditional Roman dish, exudes the humble yet hearty spirit of cucina Romana. Spooned over white beans and breaded chicken, loosely draped in bacon and melted pecorino, is a velvety saucing of white wine and capers, percolating with the aroma of fresh sage and lemon zest.

Homegrown classics — such as shrimp and grits ($20), high on low-country charm, and the famous Helen’s burger ($12) — deliver their own mix of comfort and refinement. The shrimp do a tuck and dive into a shallow bayou of gravy, rich with butter and herbs, spooned over grits as creamy as tapioca pudding. The burger — thick and burly, heaped with white cheddar, bacon, and sweet-sour pickled onions — fits snugly with a side of jaggedy, dill-speckled butter fries ($5).

What the future now holds for Tanglewood, Helen’s and other decades-old dining establishments remains as unclear as it does for other restaurants. At least for now, they have learned to adapt to this new business environment, even if that means scrapping modes of operating that have worked for generations.

Anne Hardwick, for one, is hopeful that Tanglewood will endure. “We have longevity, and we have staying power. So our perspective right now is we’re not going anywhere, and we’re just kind of going with the flow and seeing where this goes.”

Claire Tuite similarly refuses to believe that Helen’s is going anywhere anytime soon. “We’re a staple in the community,” she says, adding that losing Helen’s would be “an unconscionable loss — it’s a hard thing for me to even wrap my head around.”

I hope they’re right. As Times-Dispatch dining editor Karri Peifer wrote back in January, “The story of Richmond restaurants is the story of us.” And who has been telling Richmond’s story longer than places like Tanglewood and Helen’s?

The Starbucks at 5802 Grove Ave. near the intersection of Libbie Avenue is closed for good.

Wear face masks, wash your hands and wear sterile gloves and people will order takeout. Don't, and we won't.