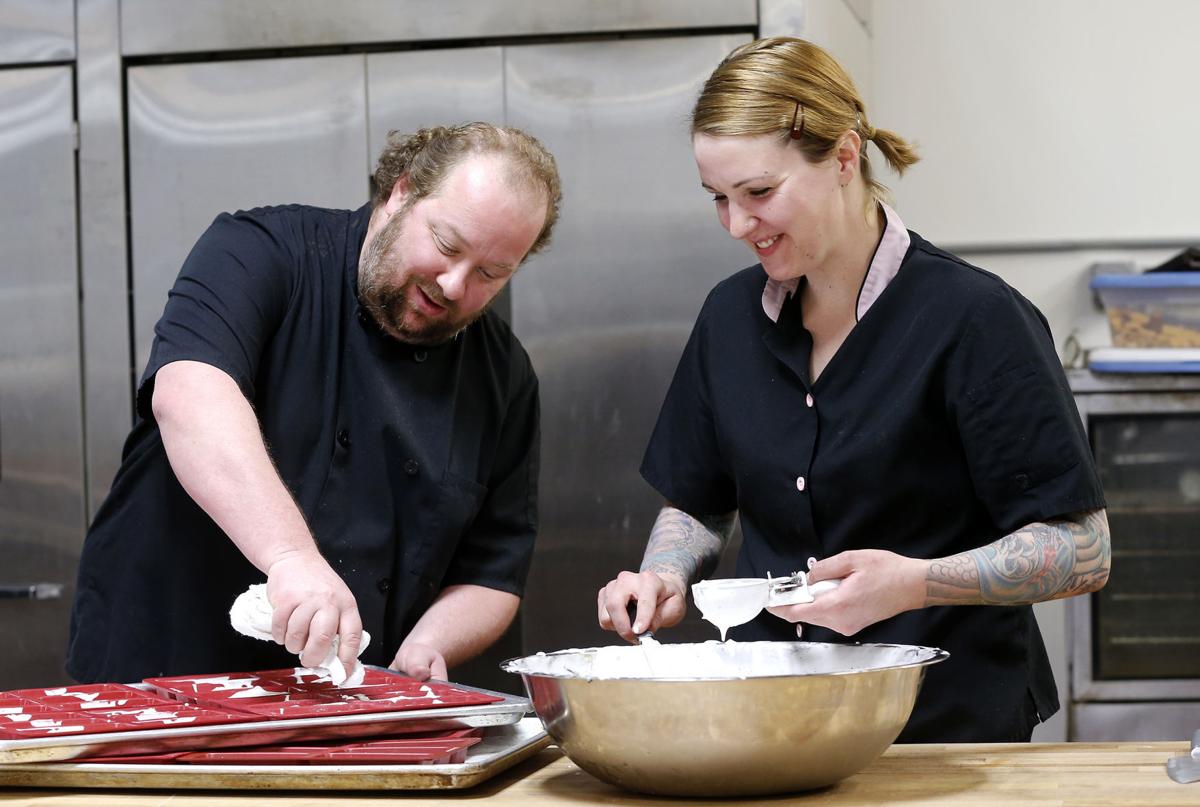 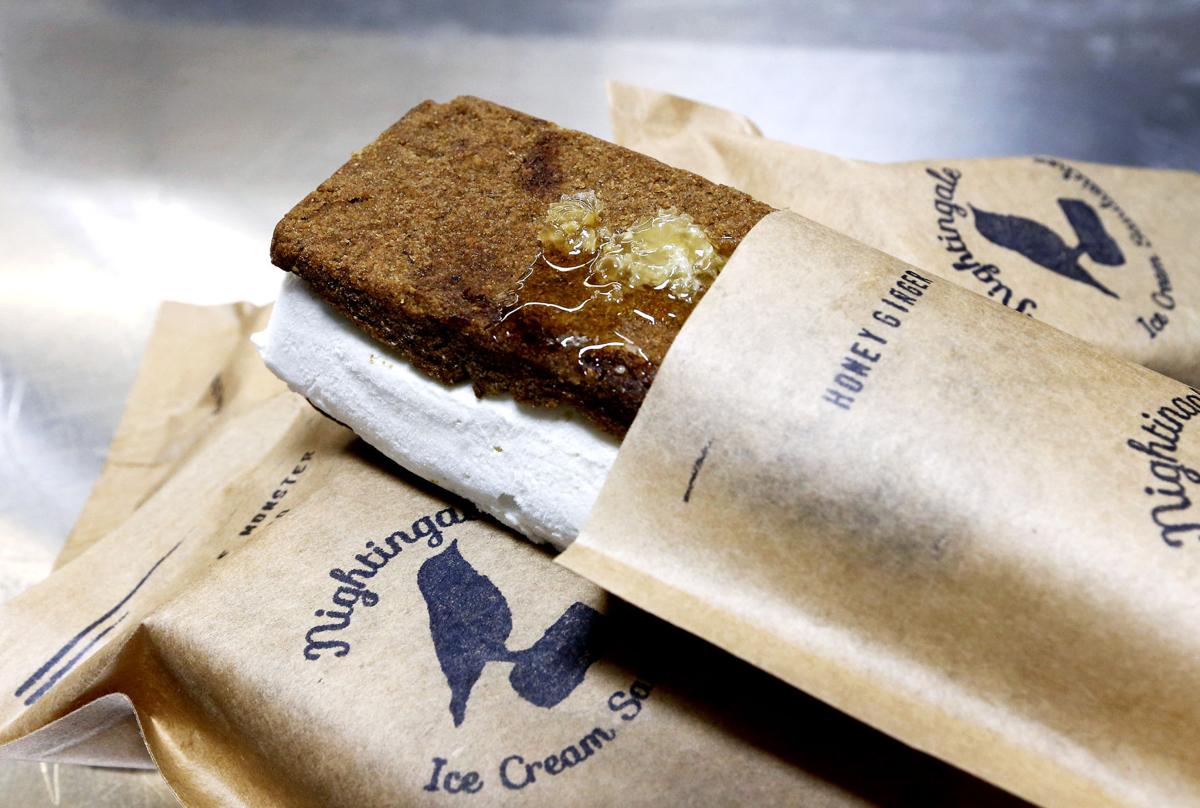 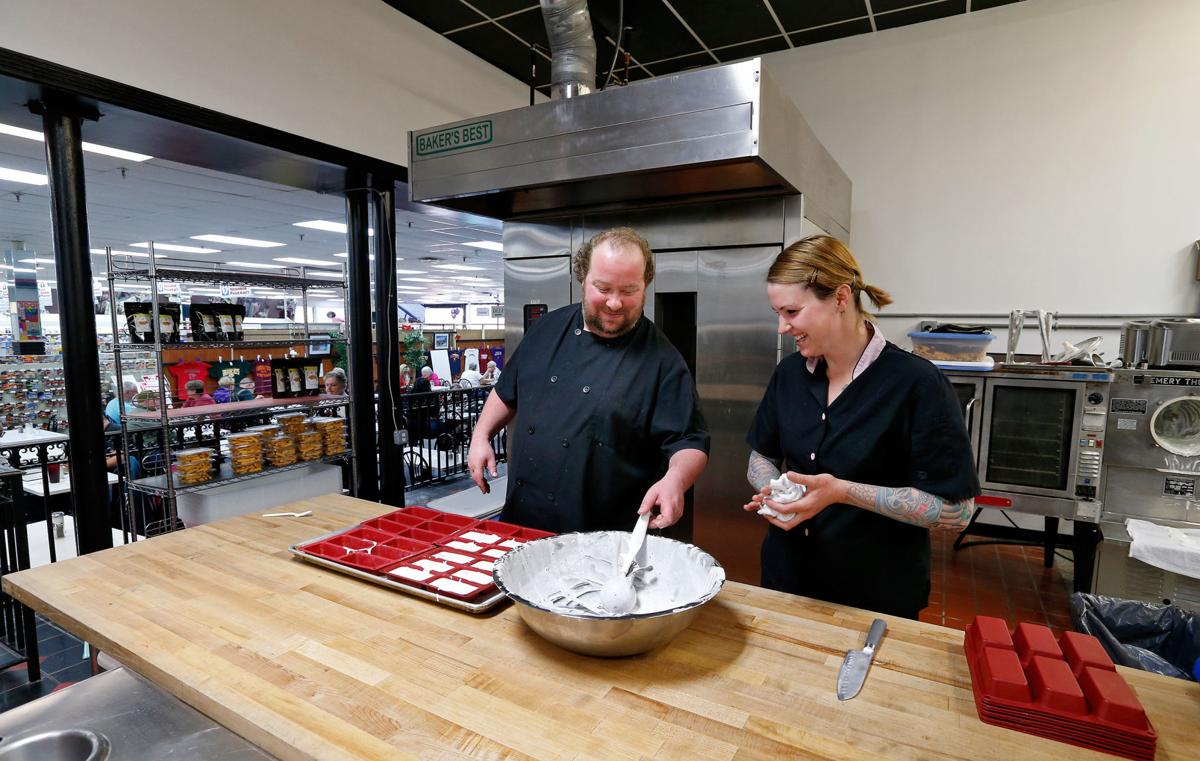 Married couple Xavier Meers and Hannah Pollack left behind careers in restaurant kitchens to start their Nightingale Ice Cream Sandwiches business, which currently operates out of Westbury Pharmacy. Pollack, a Richmond native, comes up with the ice cream flavors and sandwich creations, and Brussels-born Meers sells and delivers the goods. 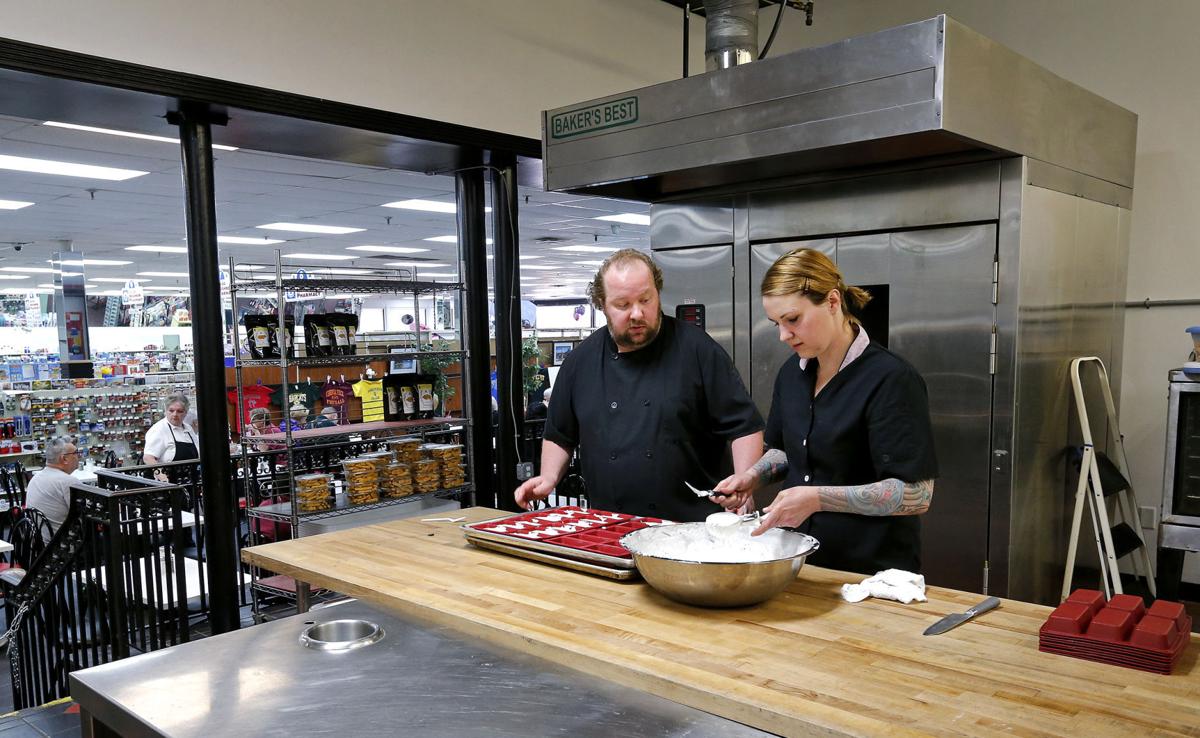 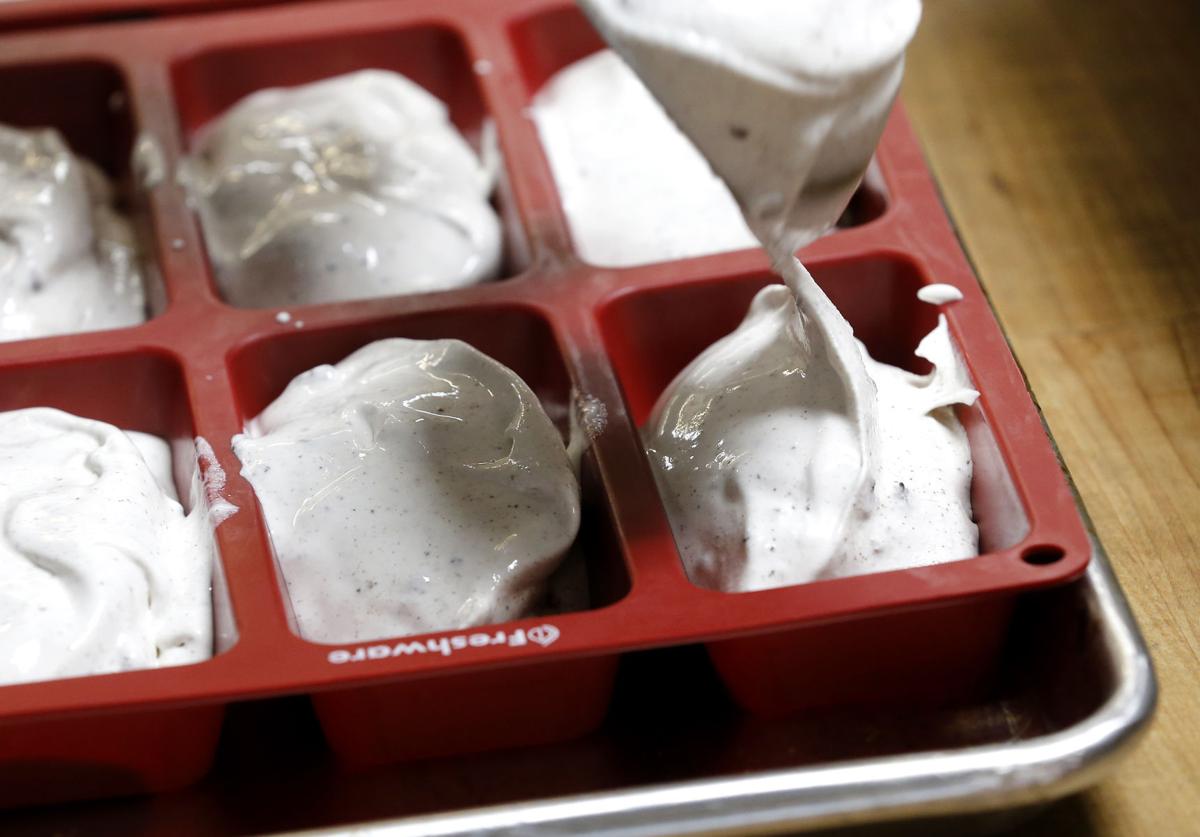 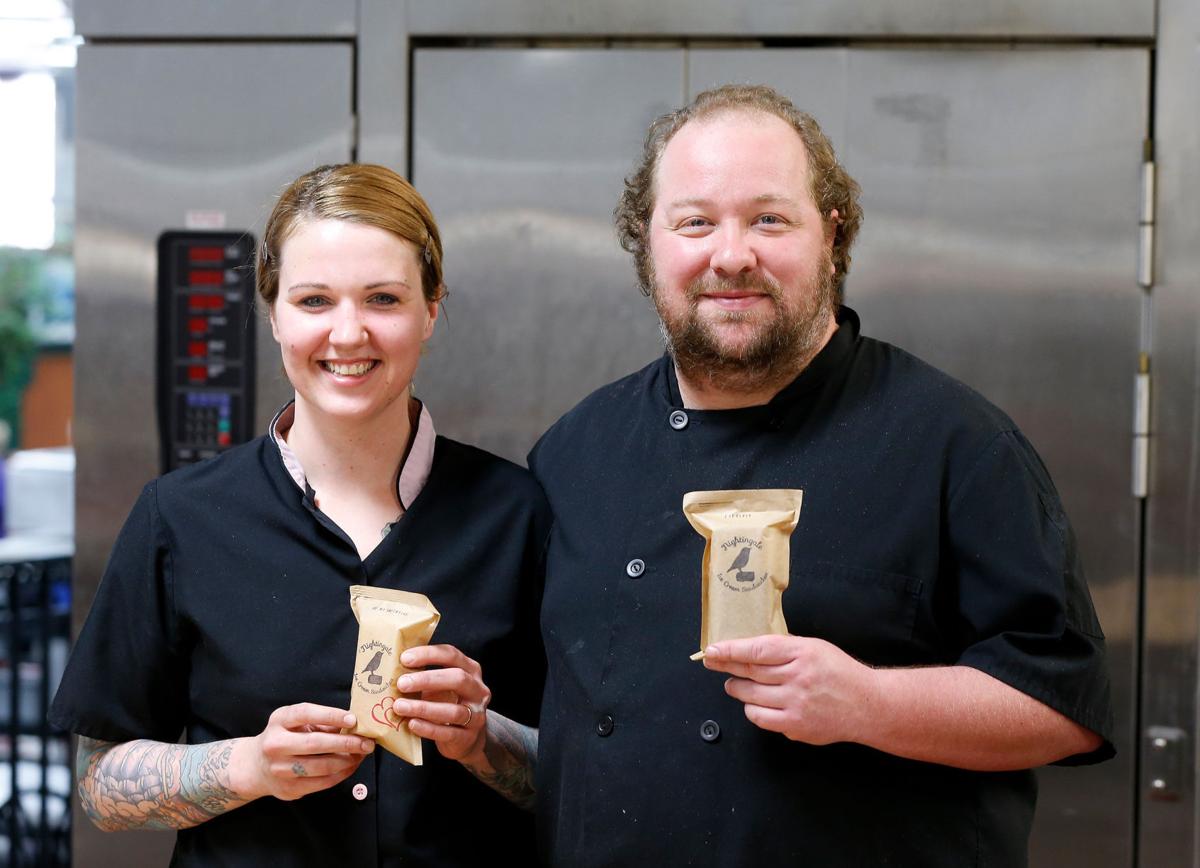 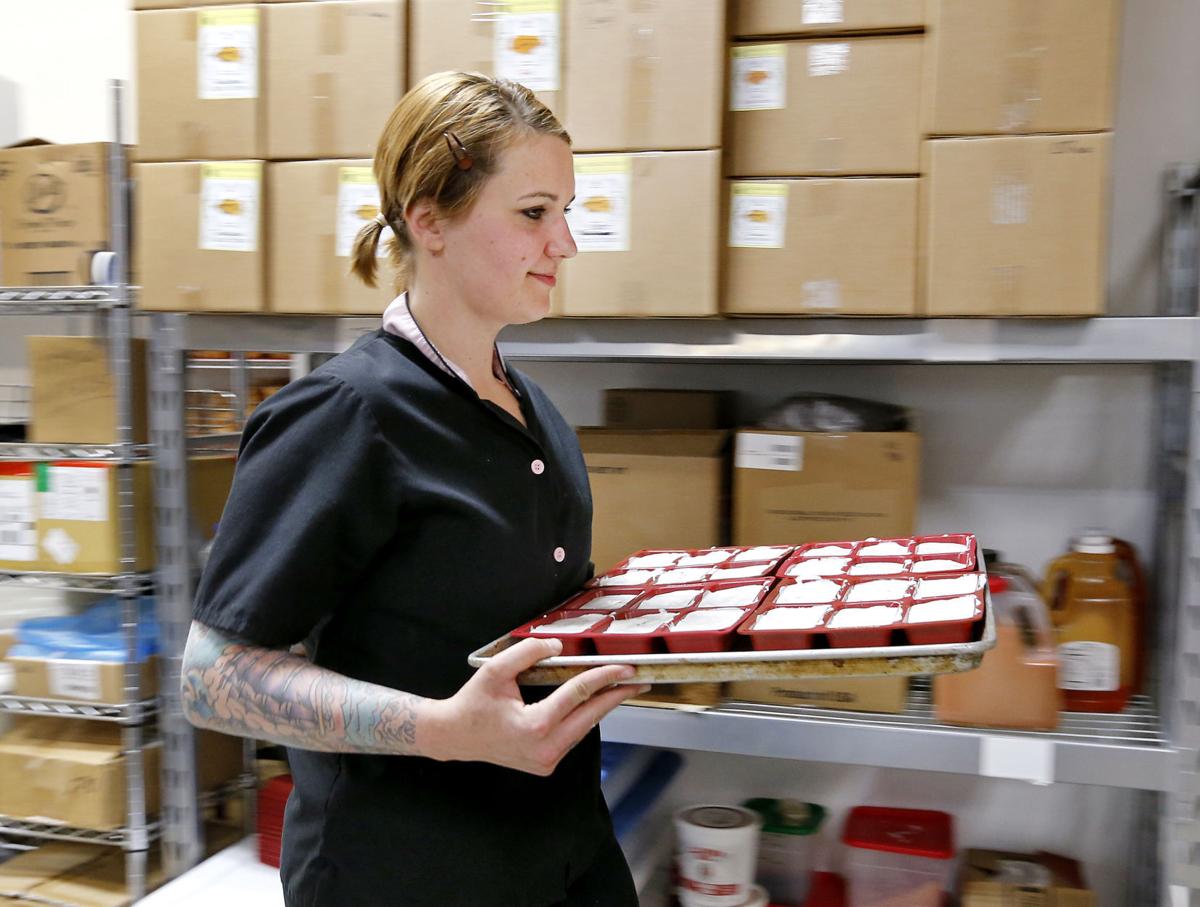 Hannah Pollack of Nightingale Ice Cream Sandwiches takes Cookie Monster ice cream sandwiches to the freezer. Pollack and her husband make upwards of 1,200 of the preservative-free sandwiches per week and rely on local suppliers for ingredients. 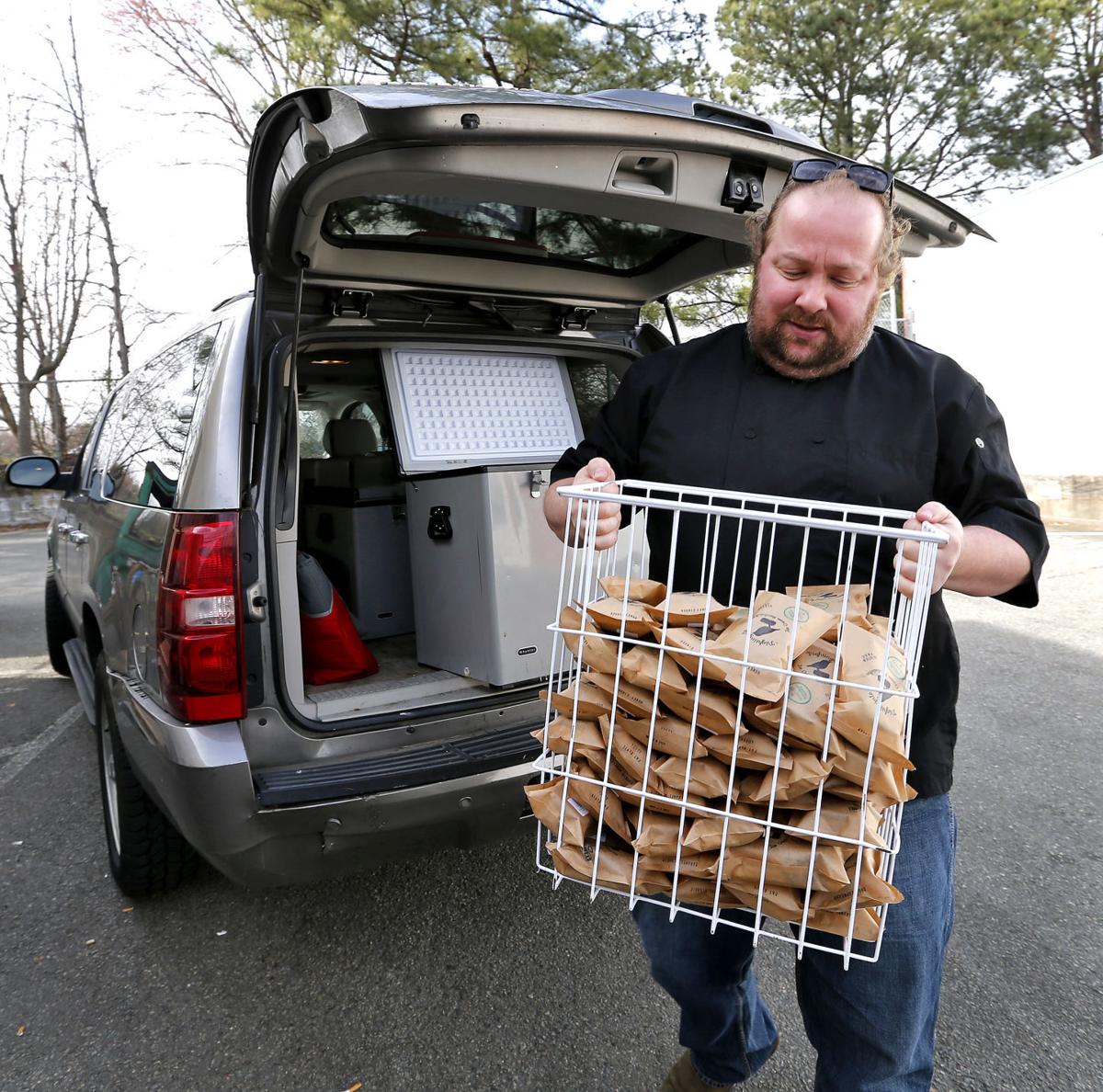 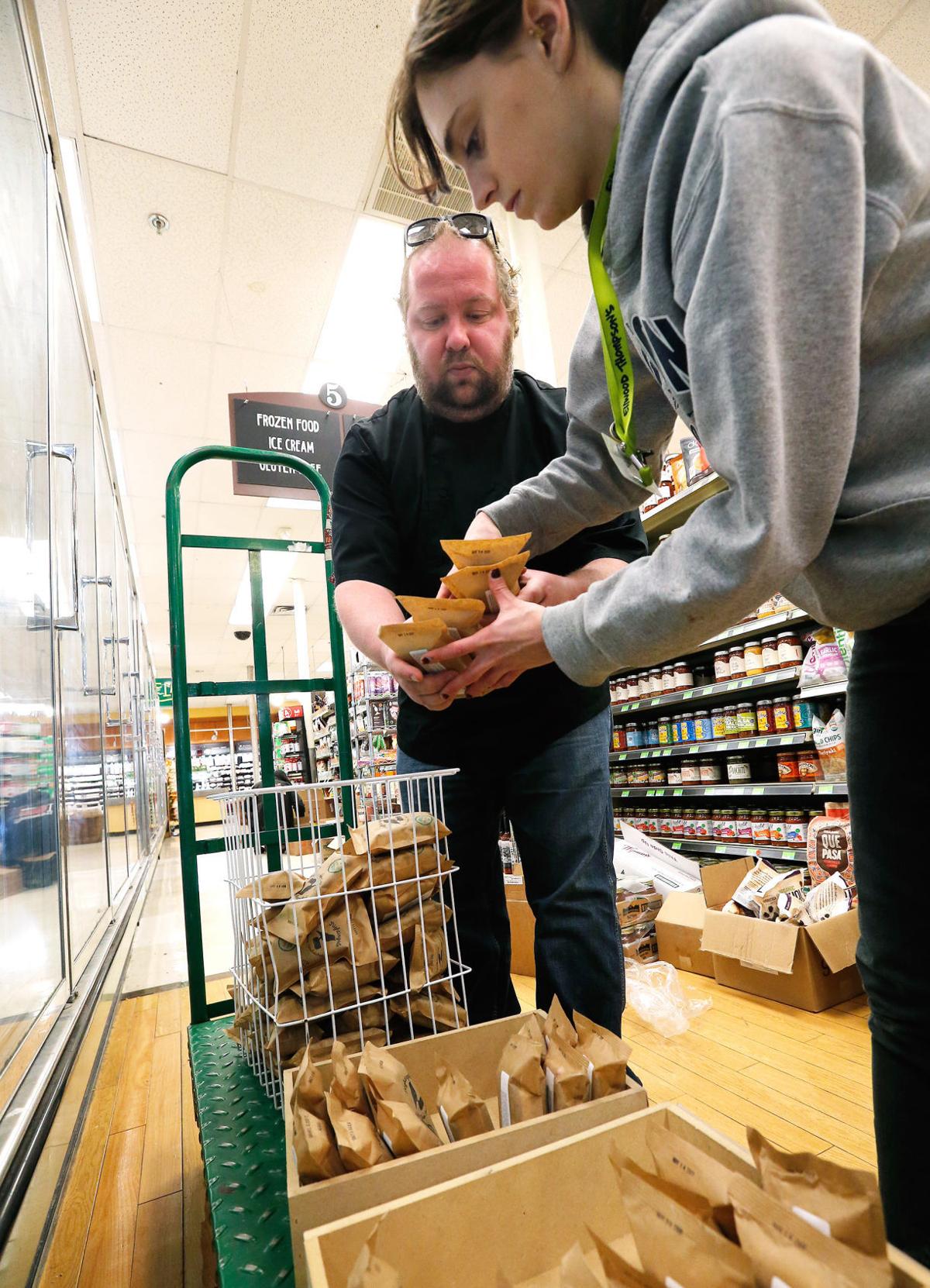 Xavier Meers delivers Nightingale Ice Cream Sandwiches to Ellwood Thompson’s, one of over 30 retail outlets and restaurants in the Richmond area that carry the sandwiches. 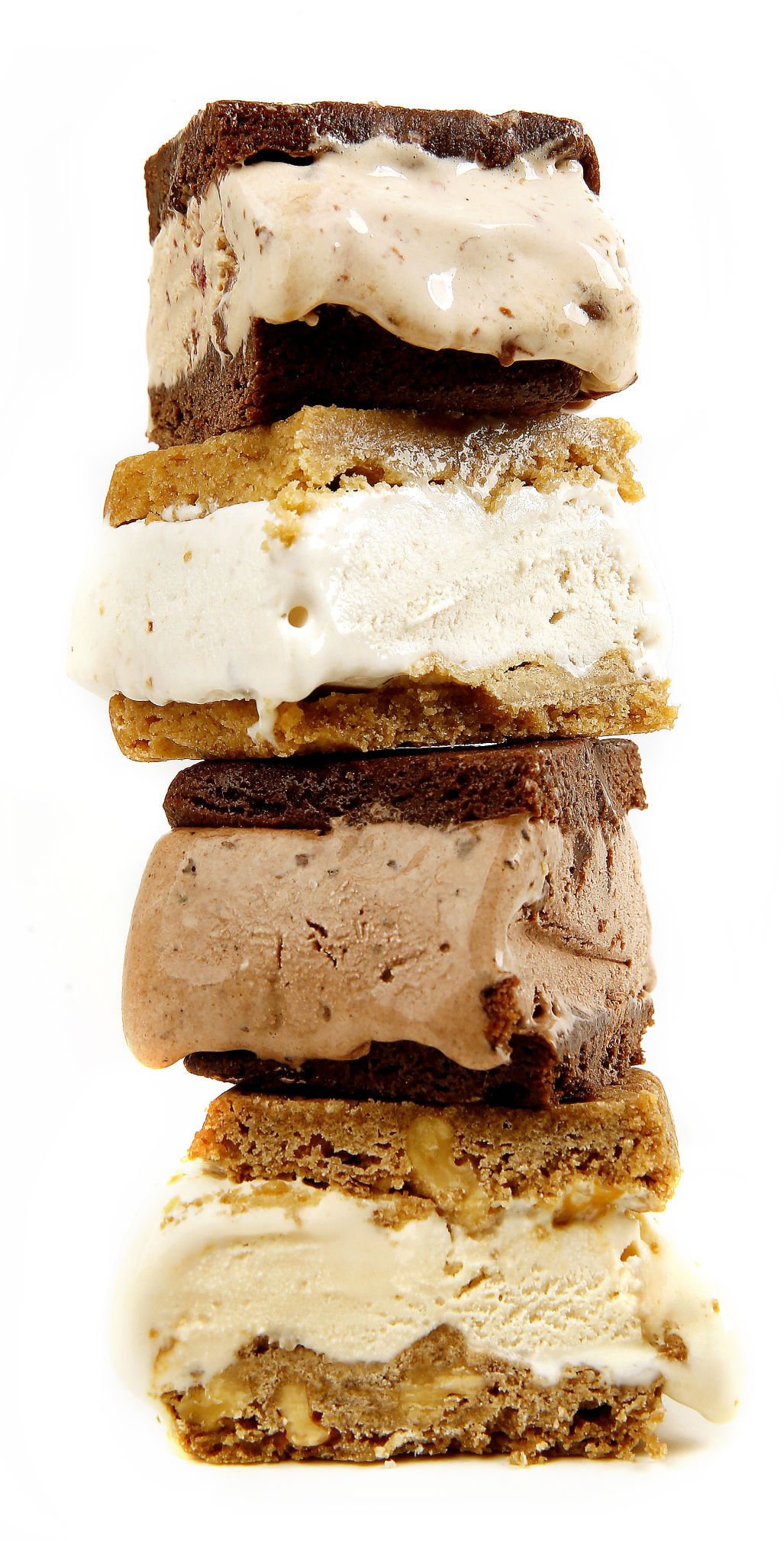 When two head chefs follow their hearts and their hunches, classics are reborn. Henrico County-based Nightingale Ice Cream Sandwiches has reinvented the old-fashioned childhood treat, this time using soft homemade sugar or chocolate espresso or peanut butter cookies and rich, all-natural ice cream flavors that smack of adulthood but appeal to all ages.

It’s led by the husband-and-wife team of Brussels-born Xavier Meers and Richmond native Hannah Pollack. You’ve likely heard their names before, as Pollack was most recently the chef at Greenleaf’s Pool Room, while Meers led the kitchens at Belle Vie European Bistro and later Brux’l Cafe, which closed in 2014 and 2016, respectively.

In short, both left restaurant kitchens behind to embark on a new venture full time: remaking an old favorite that Richmond can call its own, but with all-natural, preservative-free ingredients that are locally sourced whenever possible, everything from herbs and berries to beer.

On a recent afternoon, Pollack turned a spatula through a gigantic mixing bowl of homemade vanilla ice cream sprinkled with crushed Oreo cookies. Sandwiched between two homemade chocolate chip cookies, it’s the filling in the Cookie Monster sandwich, one of two signature items that remain on the Nightingale menu year-round. The other is Fat Elvis — banana ice cream sandwiched between peanut butter cookies and dipped in dark chocolate.

From their kitchen space in the back corner of Westbury Pharmacy on Three Chopt Road, the duo make upwards of 1,200 sandwiches per week, supplying more than 30 retail outlets and restaurants all around Richmond and beyond. Their products can be found at stores, including Ellwood Thompson’s, Union Market, Kohlmann’s Neighborhood Market, Outpost Richmond, Shields Market and Tom Leonard’s; in restaurants, such as Wong Gonzalez, Stella’s, Fat Dragon, Foo Dog and Wild Ginger; as well as other places, including Hardywood Park Craft Brewery.

On any given afternoon, regulars who visit Westbury for lunch can get a show of sorts, as Nightingale’s working area is open to the whole pharmacy. (Except on Sundays — Pollack loves brunch, she said, and it’s those mornings that she and her husband reconnect over leisurely meals at neighborhood joints all around town.)

Occasionally, Pollack said, they’ll get a question about the goings-on as they work, but for the most part, the space — which they’ve been renting since November and share with Billy Fallen of Billy Bread fame — has given them the opportunity to grow their business.

Nightingale was born while Pollack worked at Greenleaf. (Nightingale is a tribute to Amelia Ruth Parker, a vaudeville actress whose stage names included the Oriental Nightingale. She was the wife of legendary pool player and pool room namesake Ralph Greenleaf.) There, the sandwiches joined the menu and Pollack later started Nightingale as a separate side business.

“The first (sandwich) we did was just the classic you had as a child,” she said, vanilla ice cream with chocolate cookies, “but better — real ice cream, real cookies.”

A U.S. Marine who spent two years in active duty, Pollack recalls how she loved working in kitchens, and thrived under the intense pressure of running one. But as the sandwiches seemed to take on a life of their own, she couldn’t ignore that nagging little voice that told her that she’d stumbled upon something great.

Meers said research revealed that there weren’t any local businesses dedicated to making and selling homemade ice cream sandwiches for events or wholesale. In November 2016, Pollack left Greenleaf and moved Nightingale into the Westbury space. Production went from 100 sandwiches per week to more than 1,200, and they’re likely going to double or triple that this summer, she said.

They recently bought a small mobile cart, so they can take their sandwiches to festivals and street corners and everywhere in between. Need something cool — pun intended — for your wedding? Nightingale can customize full-size and mini sandwiches for the big day, right down to the stamps on the packaging.

“We were surprised by how quick it took off,” Pollack said, adding that she’s also happy to work with her husband again. The couple met when she was his sous chef at Belle Vie and they were married in December 2015. Pollack said jokingly that for two people who are used to being in charge in the kitchen, there was a slight learning curve as they figured out how to work with each other.

But you might say they go together like, well, a Fat Elvis ice cream sandwich — completely different but together, wonderfully balanced.

Generally, Pollack runs the kitchen (read: she’s the brains behind the ice cream flavors and sandwich creations) while Meers uses his many connections to sell their products and deliver the goods. He’s also her guinea pig when it comes to testing ice cream and cookie flavors and, given his Belgian heritage, he quipped, it’s only right that he sample the beers they use.

Pollack said her family has been a big help, too, noting that her father still stamps all of their bags and packaging by hand. Meers’ father, on the other hand, who still lives in Belgium, “he don’t understand.”

“In Europe, we don’t eat ice cream sandwiches,” Meers explained with a grin, and really, even ice cream isn’t nearly as popular in Belgium as it is here.

So “I have to explain five times what I’m doing,” Meers said. He’s constantly reassuring his father during their weekly phone calls that their business — “ice cream bars,” as his father calls them — is taking off.

For their efforts, Nightingale was nominated for a 2017 Elby Award for “local food and/or beverage product of the year (excluding beer).” The Elbys recognize the best of Richmond’s dining scene. (Reservoir Distillery Rye Whiskey ultimately won the category at the Feb. 19 event.)

“We take the time to do it right,” Meers said, adding that Nightingale relies on a growing list of local suppliers for the ingredients in their sandwiches, partnerships they value and cite as a factor in their early success. For example, the spring menu includes Hardywood’s coffee stout, Agriberry strawberries, Hummingbird Gardens’ lavender and Sugar Shack’s blueberry cake doughnuts.

“I think that’s why we’ve grown so quickly,” Pollack added. “We’re all helping each other out.”

When Nightingale approached Ellwood Thompson’s about an exclusive flavor, Beirne said, “we were all in.”

“Hannah and Xavier outdid themselves,” he said, adding that the market is always looking for fresh local products. The sandwich “is delicious and we are proud of the outcome.”

Hardywood Marketing Manager Matt Shofner knew of Pollack’s sandwiches before Nightingale really got off the ground, and said he happened to try a peach ice cream sandwich about the time the brewery released its peach tripel. Something clicked, he said, and he approached Pollack about using Hardywood’s reserved series beers, which use fresh local ingredients, in her ice cream sandwiches. Beers such as Hardywood’s gingerbread and raspberry stouts, Farmhouse Pumpkin and now, its coffee stout.

Hardywood sells the sandwiches at both their Richmond and Charlottesville taprooms.

“Working with Hannah and Xavier is a treat,” Shofner said, adding they’re smart and well-intentioned business partners who happen to know a thing or two about using beer to its fullest potential.

“She’s a wizard,” he said about Pollack. “She knows how to make something delectable.”

Go to Richmond.com for more photos of the Nightingale ice cream sandwich team.

Married couple Xavier Meers and Hannah Pollack left behind careers in restaurant kitchens to start their Nightingale Ice Cream Sandwiches business, which currently operates out of Westbury Pharmacy. Pollack, a Richmond native, comes up with the ice cream flavors and sandwich creations, and Brussels-born Meers sells and delivers the goods.

Hannah Pollack of Nightingale Ice Cream Sandwiches takes Cookie Monster ice cream sandwiches to the freezer. Pollack and her husband make upwards of 1,200 of the preservative-free sandwiches per week and rely on local suppliers for ingredients.

Xavier Meers delivers Nightingale Ice Cream Sandwiches to Ellwood Thompson’s, one of over 30 retail outlets and restaurants in the Richmond area that carry the sandwiches.