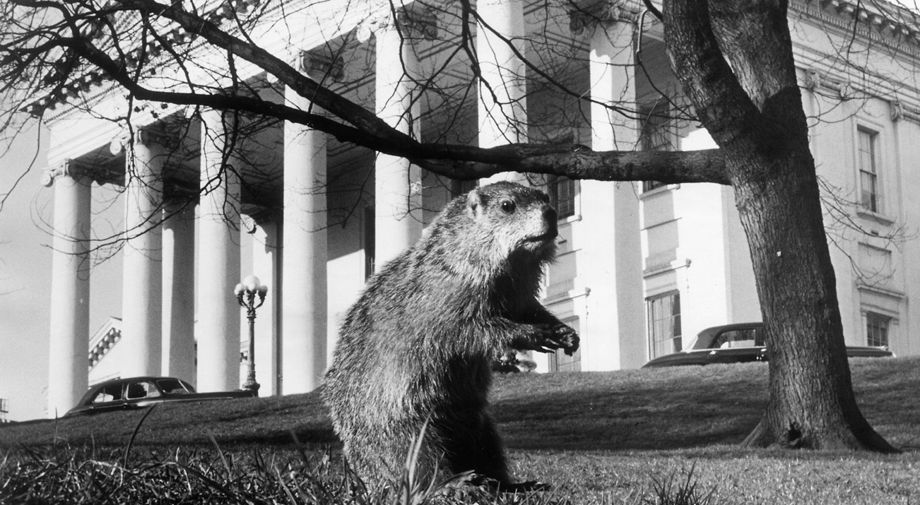 This is Mr. Marmota Monax, the Virginia groundhog in 1952. Records do not indicate whether or not this is the groundhog that met a tragic end in 1954.

Groundhog dies in 1954 before prediction in Richmond.

This story originally appeared in the Richmond Times-Dispatch on Wednesday, Feb. 3, 1954, with the headline “Groundhog Dies Before Making Annual Forecast.”

The groundhog dropped dead yesterday, but it wasn’t because of the balmy weather.

The groundhog was caged in Capitol Square so everybody could watch him make his annual Groundhog Day weather prediction. But he killed himself trying to get out of his cage at the State Department of Game and Inland Fisheries.

Hardly taking notice of his amateur competitor, the Byrd Field weatherman called for rather cloudy weather today, with a chance of a light shower. The high should be near 60.

Tonight, he said, will be cloudy and turning colder, with a low in the lower 30’s. Thursday should be cloudy and colder too, with a high in the upper 40’s.

He predicted rain, totally .1 to .3 inch, over the week end.

Today probably won’t be quite as warm as yesterday when the mean temperature of 53 was 13 degrees above normal for the date.

In destroying himself yesterday, the groundhog also destroyed hopes for his annual forecast. The groundhog myth has it that the animal scurries back into his hole; portending 40 more days of Winter, if he sees his shadow on Groundhog Day.

The Weatherman, though, went right ahead last night with his 30-day outlook. He said precipitation is expected to exceed normal along the Atlantic seaboard, with much of it in the form of snow from Virginia northward.

Temperatures for the month probably will be below seasonal normals, he added.

That sounded like 30 more days of Winter, no matter what the groundhog saw.

From the Archives: The fascinating and bizarre stories of Groundhog Days in Virginia

This article was originally posted in January 2019.

This is Mr. Marmota Monax, the Virginia groundhog in 1952. Records do not indicate whether or not this is the groundhog that met a tragic end in 1954.

Groundhog dies in 1954 before prediction in Richmond.