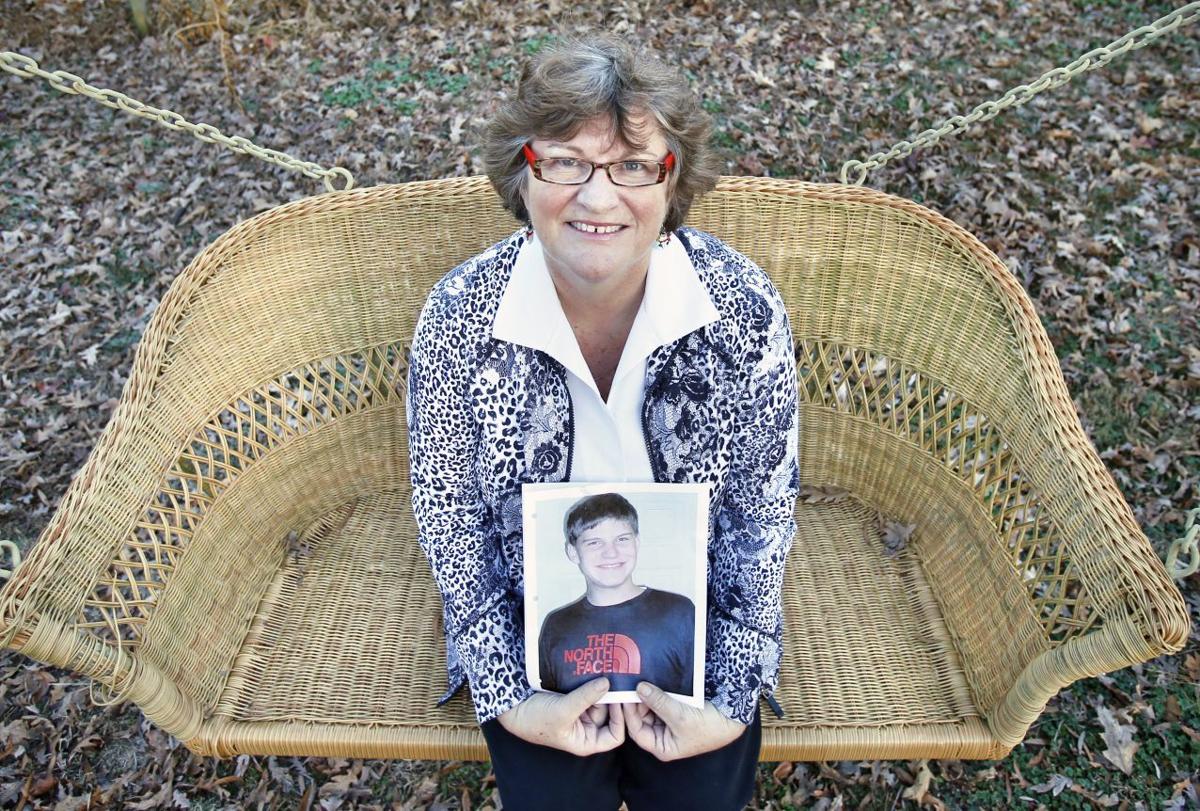 In this 2012 photo Shirley Ramsey holds a photo of hers on Jackson. Ramsey is chairperson for the Virginia chapter of the American Foundation for Suicide Prevention. 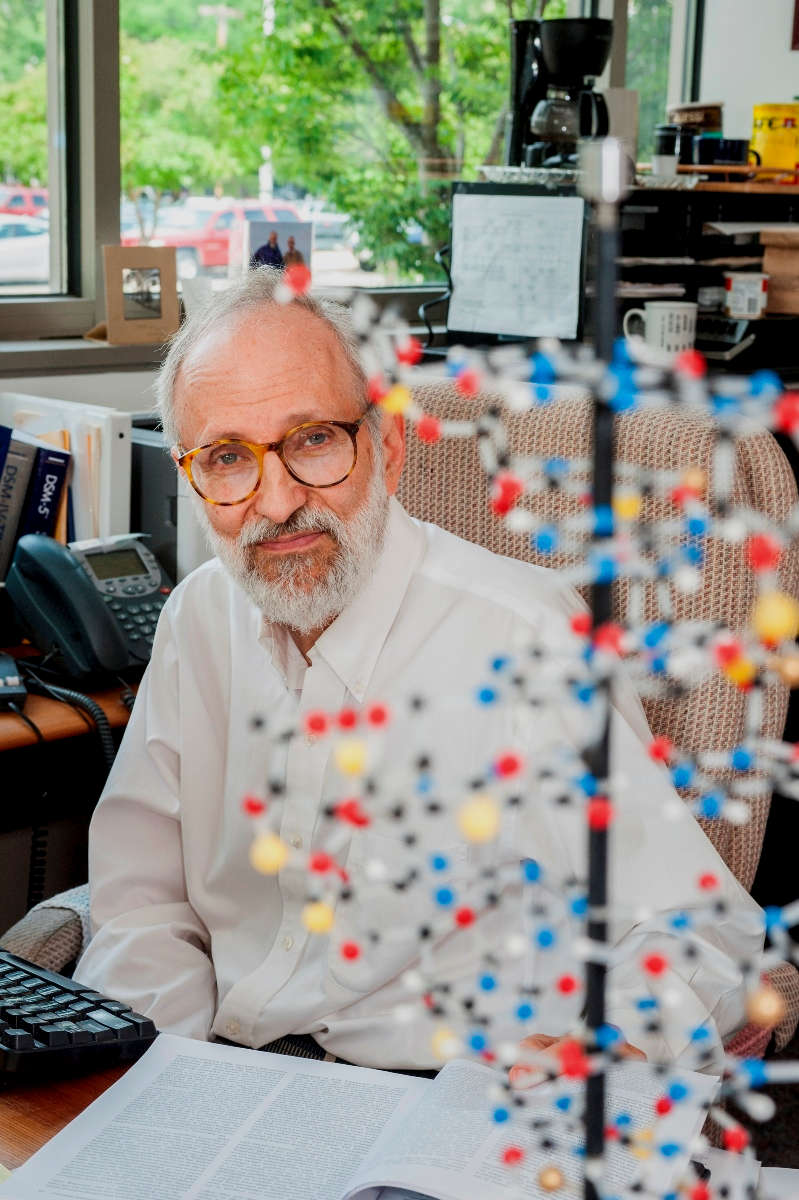 If there are genes that increase risk for major depression, Shirley Ramsey feels confident that some variation of those genes run through her family’s DNA.

“I have lost five family members to suicide,” said Ramsey, a local woman who helps organize an annual walk to remember people who have died by suicide. Her son Jackson killed himself in 2010 at age 16, and her mother, maternal grandmother, an uncle and a nephew also died by suicide.

“I have always thought that it was genetic, and my family is a testimony to that,” Ramsey said.

New research from an international team co-led by a Virginia Commonwealth University psychiatrist has linked two genes to major depression, a serious medical disorder affecting millions, including some who don’t respond to standard treatments.

“They are potential links to the biology of the disorder that can then lead us to understand the disorder at a biological level, which we’ve never been able to do,” said Dr. Kenneth Kendler, explaining the importance of the research findings.

“Once we clarify the biological pathways, pharmaceutical companies will have new ways to develop treatments,” said Kendler, a professor of psychiatry and human and molecular genetics at the VCU School of Medicine.

“This is not just an academic finding. It’s opening a door to pathways to try to clarify this disorder,” he said.

Kendler is one of the lead investigators for the research study reported in July in the science journal Nature.

The researchers studied genetic samples from thousands of carefully selected patients with severe depression and control patients who did not have depression to look for genetic differences between them. They searched for the genes using what’s called a genome-wide association study, a method that has been around for about a decade to discover genetic variants that affect risk for complex illnesses like depression that have multiple genes involved.

They were not the first to try this method, but until their study no one had been successful at finding genes linked to depression, Kendler said.

Finding genes that might be linked to depression using genome-wide association studies were proving so difficult that funding agencies were starting to shift the focus to other methods, he said.

For the research, Kendler collaborated with Jonathan Flint, a human genetics expert at the Wellcome Trust Centre for Human Genetics at the University of Oxford in the United Kingdom, and with multiple researchers in China.

Kendler said that to maximize their chances of success, they decided that study participants had to be as much alike as possible. They went to China and worked with researchers there to recruit thousands of women being treated for severe recurrent depression.

“China has a homogeneous culture, and it is also considerably more ethnically homogeneous than is the United States and many countries in Europe,” Kendler said. “We were even more rigorous than that because we required all participants in the study — both cases, women in the study with depression and controls — to have all four of their grandparents to be Han Chinese,” Kendler said.

He said the study cases were at least 30 years old and had to have had a minimum of two episodes of severe depression. Though they didn’t plan it that way, very few of the women smoked cigarettes, drank alcohol or used illicit drugs.

“That turned out to be a boon for us because in the United States and Western Europe, many cases of depression are confounded by alcohol and drug problems,” Kendler said. “It’s often quite difficult to sort out whether it’s really a depression that led to alcohol or drugs problems, or things happen the other way around.”

When it was all done, the research identified two variations on chromosome 10 that increased the risk for severe depression. One was near a gene called SIRT1 gene. The other was near a gene known as LHPP.

To get the study in the highly regarded Nature, the researchers had to have the findings replicated in an independently collected study sample.

They did that, working with a researcher in Beijing.

“I didn’t think there was much chance that things were going to replicate,” Kendler said, recalling the wait for those results, which came by email.

“The replications could not have been clearer. I had to pinch myself. Many of the results in this kind of research don’t replicate,” Kendler said.

The research was funded by London-based Wellcome Trust and the U.S. National Institute of Mental Health. Kendler said about six colleagues at VCU’s Virginia Institute for Psychiatric and Behavioral Genetics also collaborated on the project.

During any given year, an estimated 7 percent of U.S. adults are battling major depression. As many as a third do not respond to initial treatments. Medications can take weeks to start showing benefit. Methods such as electroconvulsive “shock” therapy that were once in vogue then later shunned as barbaric have in recent years made a comeback to treat the most resistant cases.

Kendler and others say that major depression is one of the top public health issues.

“When the World Health Organization rates all of the diseases that humans can have, they rank them by importance in public health throughout the world, cardiovascular disease is No. 1 and depression is No. 2. It’s so common, it hits people early in life, it’s tremendously important,” Kendler said.

“We are talking about severe depression. ... It involves substantial impairment. These individuals are not able to do their standard job. They can’t go shopping, care for their families, go to work, do things,” Kendler said.

Ramsey talks publicly about her family history of mental illness for the sake of future generations. This year’s Out of the Darkness community walk in which she is helping to organize is Sept. 19 at Deep Run Park in Henrico County. The goal is to raise awareness and to remember those who have battled mental illness and died from it.

“I read the news on the doctor from (VCU) and sent it to my nephew right away, who is interested since he lost his little brother and he, too, worries about his offspring,” Ramsey said.

Her family, she said, seems to be haunted by a type of depression that includes psychotic breaks. Her son was never diagnosed but left a suicide note and other writings that provided clues to his mental state. She has talked with a psychiatrist about her son and their family history to try to get answers.

“This is why I have gotten so proactive, to prevent the next generation from becoming suicidal. I am scared for the offspring of my own two surviving children when they begin to have children,” Ramsey said.

Kendler said the research team is seeking additional grants to further explore the findings, while other basic science researchers are studying the biology of the genes in animal models.

He said the SIRT1 gene has been associated with aging, anxiety and metabolic features. Less is known about the LHPP gene.

Others in the field say the work is groundbreaking. Writing in Nature, Patrick F. Sullivan of the University of North Carolina said the study “marks the beginning of the beginning for the genetic dissection of” major depressive disorder. In the open access journal Genome Medicine, researchers call the work “provocative” and “intriguing.”

Both perspective pieces say the work is an important first step, but that there is much more to be done. Sullivan pointed out that the results did not hold up when samples from Europeans were examined for the genetic variations.

“Perhaps these variants are truly causative for (major depressive disorder) only in severe cases from China. However, many other common associations for complex illnesses hold across the world,” Sullivan wrote.

In Richmond, Dr. Martin Buxton, a psychiatrist who cares for patients with depression and other mental disorders, called the work extremely important.

“It is obviously the wave of the future,” in terms of figuring out the population that is vulnerable and in terms of connecting the intervention with the form of the illness, said Buxton, chief of psychiatry at Chippenham and Johnston-Willis hospitals and medical director of Tucker Pavilion psychiatric facility.

“We are starting to get some ability now to figure out which patients might respond to which medication better with less side effects. There is genetic testing we do now,” Buxton said.

If you need help

• feelings of hopelessness or pessimism

• feelings of guilt, worthlessness or helplessness

• loss of interest in activities or hobbies once pleasurable, including sex

• thoughts of suicide or suicide attempts

• aches or pains, headaches, cramps or digestive problems that do not ease even with treatment

Out of the Darkness community walk

Details: This American Foundation for Suicide Prevention walk is about 3 miles. "Remembrance Stations" will be set up to allow people to post a picture of loved ones who died by suicide. Will include guest speakers and activities.

When someone breaks an arm, everyone wants to sign the cast; but if a child’s mind or spirit is “broken,” people want to pretend the injury do…

In this 2012 photo Shirley Ramsey holds a photo of hers on Jackson. Ramsey is chairperson for the Virginia chapter of the American Foundation for Suicide Prevention.