Jehovah's Witnesses have restarted their door-to-door ministry after more than two and a half years on hiatus due to the coronavirus pandemic, reviving a religious practice that the faith considers crucial and cherished.

From coast to coast, members of the Christian denomination fanned out in cities and towns Thursday to share literature and converse about God for the first time since March 2020.

In the Jamaica Plain neighborhood on the south side of Boston, Dan and Carrie Sideris spent a balmy morning walking around knocking on doors and ringing bells. Dan Sideris said he had been apprehensive about evangelizing in person in "a changed world," but the experience erased any traces of doubt.

"It all came back quite naturally because we don't have a canned speech," he said. "We try to engage with people about what's in their heart, and what we say comes from our hearts."

The couple were surprised at how many people opened their doors and were receptive.

One man took a break from a Zoom call to accept their booklets and set up an appointment to continue the conversation. At another home, a woman spoke of how many family members died in the last two years — something the Siderises could relate to, both of them having lost parents recently. Another woman was too busy at the moment but spoke to Carrie Sideris through the window and said she could come back Sunday.

"I've been looking forward to this day," she said. "When I rang the first doorbell this morning, a total calm came over me. I was back where I needed to be."

Jehovah's Witnesses suspended door-knocking in the early days of the pandemic's onset in the United States, just as much of the rest of society went into lockdown too. The organization also ended all public meetings at its 13,000 congregations nationwide and canceled 5,600 annual gatherings worldwide — an unprecedented move not taken even during the Spanish Flu pandemic in 1918, which killed 50 million people worldwide.

Witnesses continued their ministry by writing letters and making phone calls, but it wasn't the same because it lacked a personal touch, said Robert Hendriks, national spokesperson for the denomination.

"To us, going door to door is an expression of our God's impartiality," he said. "We go to everyone and let them choose whether they want to hear us or not."

Even in pre-pandemic times, door-knocking ministry came with anxiety because Witnesses never knew how they would be received at any given home. In 2022 that's even more the case, and evangelizers are being advised to be mindful that lives and attitudes have changed.

"It's going to take an additional level of courage," Hendriks said.

The organization is not mandating masks or social distancing, leaving those decisions to each individual.

The denomination has cautiously been rebooting other activities: In April it reopened congregations for in-person gatherings, and in June it resumed public ministry where members set up carts in locations such as subway stations and hand out literature.

But getting back to door-knocking, considered not just a core belief but also an effective ministry, is a big step toward "a return to normal," Hendriks said.

Among those eager to pound the pavement again was Jonathan Gomas of Milwaukee, who started door-knocking with his parents when he was "big enough to ring a doorbell."

"When you're out in the community, you have your hand on the pulse," he said. "We haven't had that close feeling with the community for more than two years now. It feels like we've all become more distant and polarized."

Gomas and his wife and two daughters have all learned Hmong in order to better reach out to members of that community, and residents are often pleasantly surprised to open their doors to fluent speakers of their language.

"I think it made them listen even closer," he said.

"You see and appreciate these responses, and it's much more personal," he said. "You establish common ground and relationships that you can never develop over the phone or by writing a letter."

The son of Cuban refugees who came to the United States in the 1980s, Rivera said door-knocking is an important part of his spiritual identity and "feels Christ-like."

"We show respect for each person's right to hold a different belief," he said. "If they don't want to hear what we have to say, we politely thank them and move on, recognizing that we cannot judge anyone. We'll just keep on knocking."

During nationwide protests, leaders from many religious traditions spoke out to support the peaceful goals of demonstrators. But in the months since, some segments — particularly within Christianity — have taken notably different approaches.

Leaders of the six seminaries within the Southern Baptist Convention released a statement in November decrying critical race theory, a broad term often used to describe critiques of societal racism, as “incompatible with” central tenets of the faith.

Meanwhile, members of other Christian denominations, including Episcopalians and United Methodists, are exploring reparations to African Americans in greater depth.

Catholics and the president

Joe Biden will be just the second Roman Catholic president in U.S. history, after John F. Kennedy. But he has been viewed cautiously by the U.S. Conference of Catholic Bishops over his support for abortion rights.

Some argue Biden should be barred from partaking in Holy Communion, and the bishops conference has formed a working group to study how to deal with him.

However, there has been a relatively positive response from Cardinal Wilton Gregory, the archbishop of Washington. He says he won’t prevent Biden from receiving Communion and looks forward to cooperating on social issues where the president-elect’s views mesh with church teaching.

Donald Trump built close ties to conservative evangelicals even before his 2016 election, but he didn’t establish a formal White House faith operation until more than a year after his inauguration. His Faith and Opportunity Initiative has been led by Florida-based televangelist Paula White, a longtime spiritual adviser to Trump who later campaigned for his reelection.

While it’s not yet clear how Biden will set up and staff his own White House faith office, his choices will shape his administration’s approach to religious outreach. A recent report by the nonpartisan Brookings Institution recommended focusing on helping the needy by forming religious and nonreligious alliances, rather than elevating specific faith-based groups.

Under Trump there have been some rollbacks in civil rights protections for LGBTQ people that Biden is vowing to restore and expand. But that may prove complicated if Republican lawmakers and the Supreme Court, now with a solid conservative majority, endorse the arguments of religious conservatives that some of those protections infringe on religious liberty.

One example: a pending Supreme Court case in which a Catholic social services agency says it should be able to turn away same-sex couples who want to be foster parents while still receiving local government funding.

Religious conservatives also vow to oppose efforts by Democrats in Congress to pass the Equality Act, which would extend nationwide the comprehensive anti-bias protections already afforded to LGBTQ people in 21 mostly Democratic-governed states, covering such sectors as housing, public accommodations and public services.

The Southern Baptist Convention, the country’s largest Protestant denomination, plans a national meeting in June after canceling it in 2020 due to COVID-19. A new SBC president will be elected at the meeting.

For now the only declared candidate is the Rev. Albert Mohler, president of the Southern Baptist Theological Seminary. He was critical of Trump in 2016 but gradually became a supporter as the president appointed conservative judges and advocated for religious liberty. Mohler is now warning that Biden’s administration will dismay many Southern Baptists with initiatives bolstering abortion rights and LGBTQ rights.

The pandemic also forced the United Methodist Church to cancel a potentially momentous national meeting last May that’s now rescheduled for late August. The same topic will dominate the agenda: Whether America’s largest mainline Protestant denomination will split due to differences over inclusion of LGBTQ people.

Many congregations want to fully recognize same-sex marriage and ordain LGBTQ people as ministers, while conservatives want to maintain longstanding but sporadically enforced bans. Under one proposal, conservative congregations and regional bodies would be allowed to separate and form a new denomination while receiving $25 million in UMC funds and keeping their properties.

Muslim American groups have lauded Biden’s plans to end Trump’s curbs on travel from several majority-Muslim nations. And after that, the nation’s diverse Muslim communities have other hopes for his administration.

Refugee admissions to the U.S. have plummeted, with a screening system led by several faith-based groups brought to a near halt as Trump slashed the annual refugee ceiling. Biden has pledged to raise it and to build a diverse administration that includes Muslim American voices.

Even amid a mass vaccine distribution effort, religious communities will continue to wrestle with the pandemic’s impact on in-person worship.

Biden illustrated the thorniness of the debate recently when he gave a short answer to a question about Americans’ ability to worship during the pandemic: That it should happen “safely.”

Associated Press religion coverage receives support through the AP's collaboration with The Conversation US, with funding from Lilly Endowment Inc. The AP is solely responsible for this content.

How to raise children who enjoy helping others

How to raise children who enjoy helping others

Study: Eating carrots while pregnant could convince your child to have a healthy diet

Study: Eating carrots while pregnant could convince your child to have a healthy diet 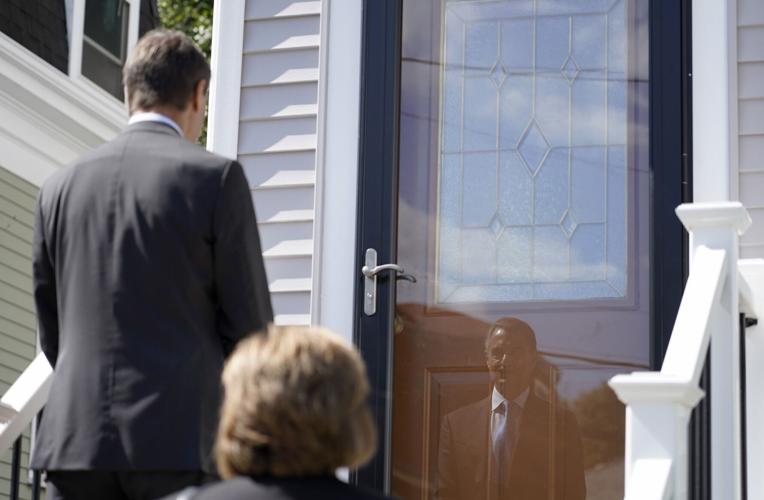 Dan Sideris is reflected in a front storm door as he and his wife, Carrie Sideris, of Newton, Mass., return to door-to-door visits as Jehovah's Witnesses, Thursday, Sept. 1, 2022, in Boston. After more than two and a half years on hiatus due to the coronavirus pandemic, members are reviving a religious practice that the faith considers crucial and cherished. 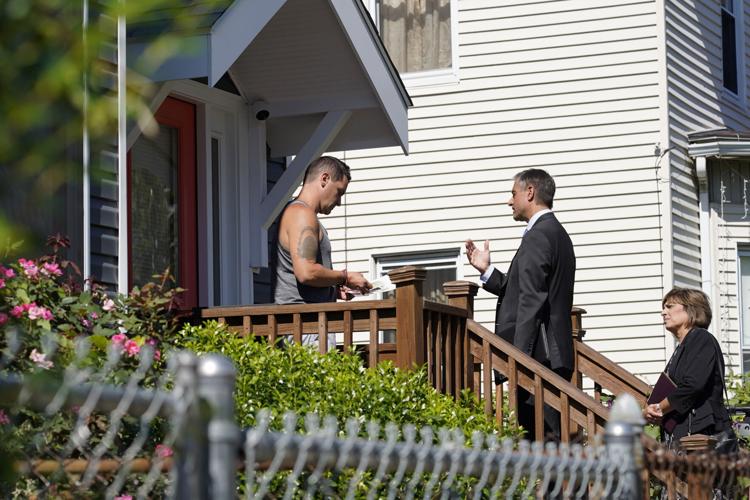 Dan Sideris, center, talks with a resident on a front porch accompanied by his wife, Carrie Sideris, as the couple returns to door-to-door visits as Jehovah's Witnesses, Thursday, Sept. 1, 2022, in Boston. Dan Sideris said he had been apprehensive about evangelizing in person in “a changed world,” but the experience erased any traces of doubt. 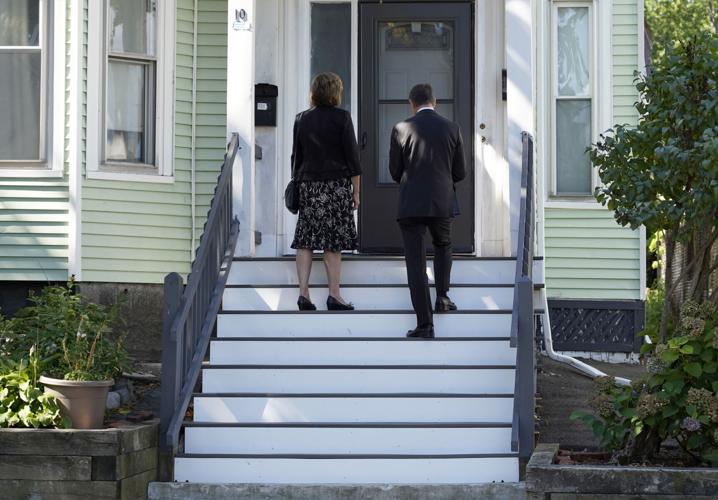 Dan Sideris and his wife, Carrie Sideris, of Newton, Mass., wait on the steps of a front door after ringing the doorbell as they return to door-to-door visits as Jehovah's Witnesses, Thursday, Sept. 1, 2022, in Boston.