The medieval history of Passover: Libel, conspiracy, and hope for freedom
0 Comments
Share this 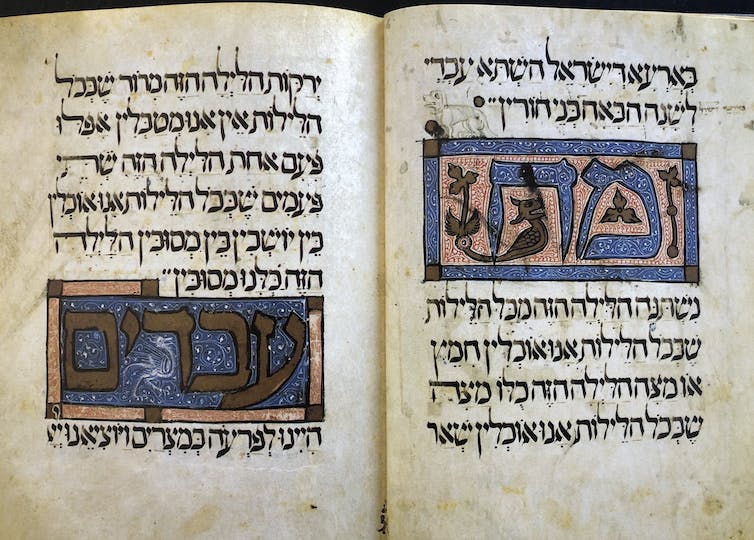 On April 8, Jewish families and their friends celebrated the first night of the week of Passover, with the most convivial gathering of the year: the Seder meal.

The Seder celebrates the memory of Exodus, when a people bound to labour in Egypt for centuries gained its freedom. So profound was this experience that survivors and future generations were instructed to retell the story annually to their sons and daughters. They were meant to narrate the marvel of Exodus – from slavery to freedom – keenly, as if they had lived it themselves.

My research as a historian of religious culture has led me to investigate attitudes to Passover in medieval and early modern Europe.

Christianity was the dominant religious culture, but Passover had become part of the Christian story too. Not only did Jesus celebrate it with his disciples in Jerusalem on what became Maundy Thursday, but the meal – its unleavened bread (matza), wine and roast lamb – symbolised the new covenant he heralded.

The Passover meal was understood by Christians as the first mass, when at the altar was transformed into Christ’s flesh and blood.

From Maundy Thursday, the Christian story looked on to the Crucifixion on Good Friday and Resurrection on Easter Sunday. The Christian calendar diverged from the Jewish one, but Passover and Easter were never too far apart. 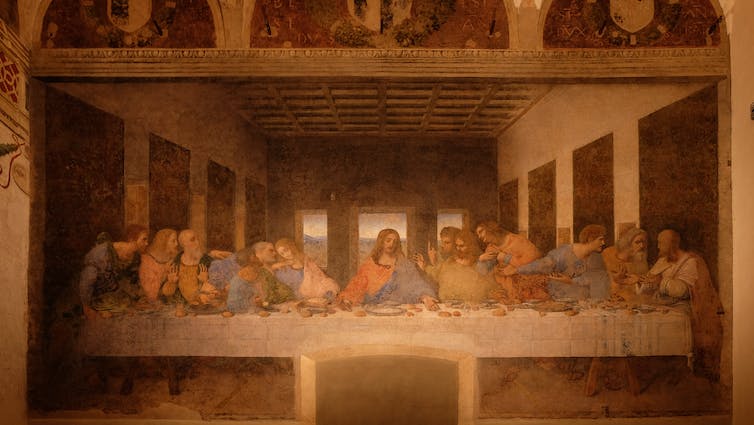 At the core of the Christian experience was a devotional reliving of the last days of Jesus on earth – and identifying with his sacrificial death – for which many Europeans believed Jews to have been be guilty. Hence Easter was a time of great tension, when Christians viewed their Jewish neighbours through a damning historical lens, especially on Good Friday. To avoid violence, medieval communities often ordered Jews to stay indoors during Holy Week.

It is not surprising that Holy Week became the backdrop to the cruellest libel against Jews – the accusation of child murder. My research has followed the development of the first known accusation, from Norwich around 1150.

On Easter Saturday 1144 the body of a 12-year-old boy was found in a shallow grave outside the city. A rumour blamed the local Jews of murder.

Several years later, a new monk of Norwich Cathedral, Thomas of Monmouth, revisited the story and composed a compelling account which ascribed the child’s death to the Jews as part of a worldwide Jewish conspiracy. He invented the narrative of how the Jews enticed the boy to their house during Passover 1144, which began four days before Easter. He described how the boy was fed, then tortured with sharp instruments, and finally was hung from the doorposts of the Jewish house. 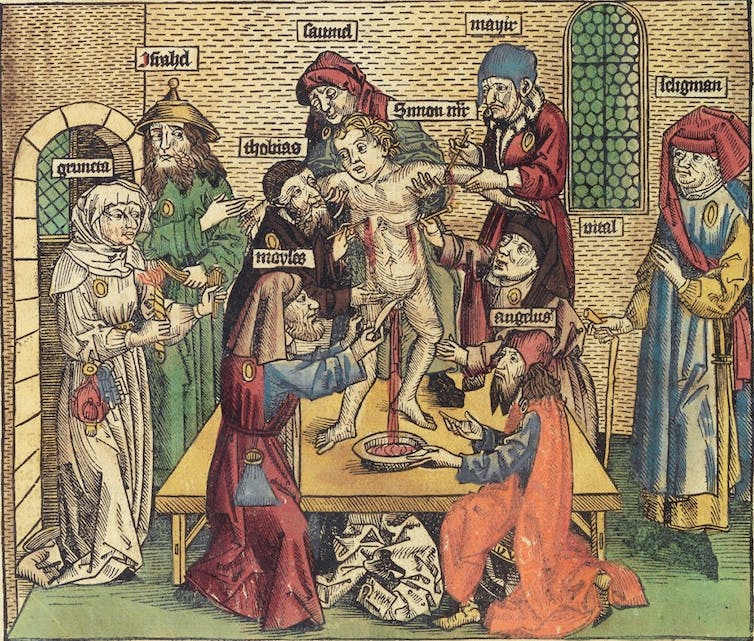 Steeped in scriptural language and allusion, the narrative called for punishment of the Jews and established a cult of the boy as a martyr. When the story reached the European continent it acquired further bloody layers and became what is known as the blood libel – the accusation the Jews used the blood of Christian children in ritual.

In England, a similar account emerged in Lincoln in 1255 and 19 Jews were killed in the aftermath. It became sufficiently embedded in English culture to be mentioned in Chaucer’s Canterbury Tales. It hovers in the background of Shakespeare’s Merchant of Venice.

The Seder meal itself evokes a difficult history. Pungent herbs stand for the bitterness of slavery. The matzah reminds of the unleavened bread the Israelites made in haste, in fear of recapture by Pharaoh’s men. 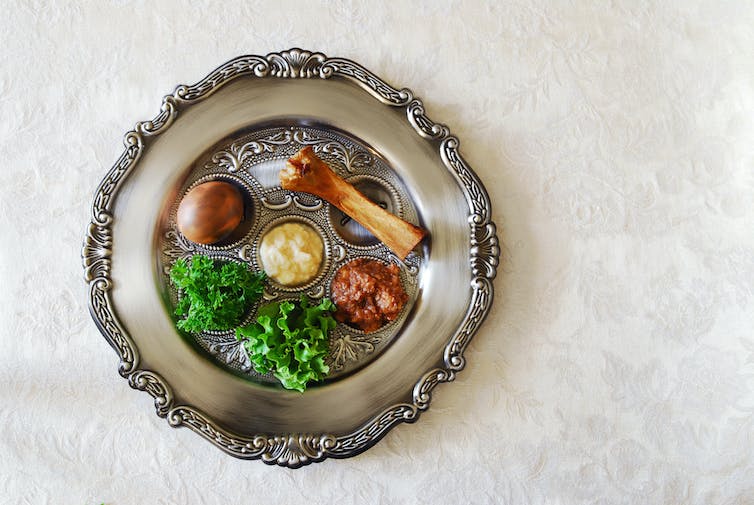 But it is an occasion of conviviality and joy. The meal is punctuated by inducements, to keep the children interested: sweet foods, the promise of gifts, and most thrilling of all, the singing of a chant reserved for the youngest participant: Mah Nishtana? (How is this night different from all others?)

It is a dinner at which reading is not only allowed, but required. Its script is the Haggadah, a book made up of biblical verse, blessings, chants and scholarly commentaries. The modern Seder preserves the words, the customs and many of the foods that were customary in medieval Europe.

This year the Seder will be different. There will be fewer family members gathering together though some of us are already experimenting with Zoom. And yet it must be a refection on freedom – personal and collective. We may better understand the yearning of those who sang Let My People Go, or the anxious attempts at festivity in ghettos, medieval and modern.

As doctors and nurses of all faiths and none work together to save lives while endangering their own, there has never been a better time to re-examine our rituals, finding in them strength and hope, and ridding them of division.

How to build your own DIY air conditioner

Study: Dog owners are willing to risk their lives for their pets

Study: Dog owners are willing to risk their lives for their pets

The New York Times bought 60 inches of Subway tuna sandwiches and had the tuna tested by a lab, which found it contained “no amplifiable tuna DNA.”

With precautions, swim lessons for unvaccinated children can be safe

The American Academy of Pediatrics says it's OK to enroll unvaccinated children in swim lessons as long as some extra precautions are taken.

Living with a short sleep gene: 'It's a gift'

Brad Johnson and his family were among the first tested for the "short sleep gene." They sleep fewer hours and bypass ill effects of sleep deprivation.

"He was our constant, cherished companion during the last 13 years and was adored by the entire Biden family," the Bidens said in a statement.

Struggling lingerie brand Victoria’s Secret, which has been closing stores in recent years, is getting rid of its scantily clad Angels.

Student loan payments are set to restart in October. Here's how to get help if you need it

For 42.9 million student loan borrowers, it’s been 18 months without a payment. That ends in October — ready or not.

The People's Pharmacy: More complaints about tinnitus after vaccination

QUESTION: I received the COVID vaccine a few weeks ago. Ever since then, I’ve had tinnitus in my ears. Is this a possible side effect? Will it…

Nervous about resuming activities? How to manage COVID transition anxiety

With COVID-19 restrictions lifted, some are hesitant to do things they had looked forward to doing post-vaccine. It's called COVID transition anxiety.

Recipe of the Day: Sesame Noodles With Spicy Peanut Sauce

When you want to get a little creative with your sides, whip up this easy sesame noodle recipe with a spicy peanut sauce.

While renters are typically prevented from “altering” a property, you still can spice up your space without upsetting the landlord. Here are some tips.