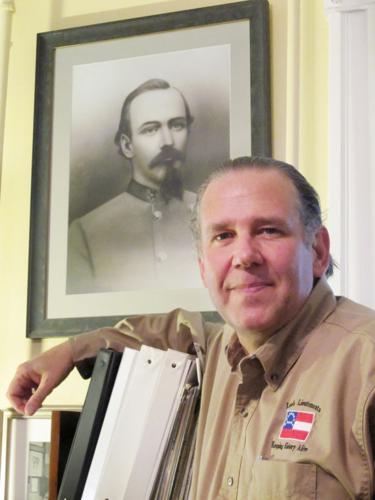 David Bridges, a Presbyterian minister turned author, in his Richmond home, under the watchful gaze of his most recent story subject: his great-great uncle, Confederate Major James Breathed, who has been posthumously awarded the rare Confederate Medal of Honor. 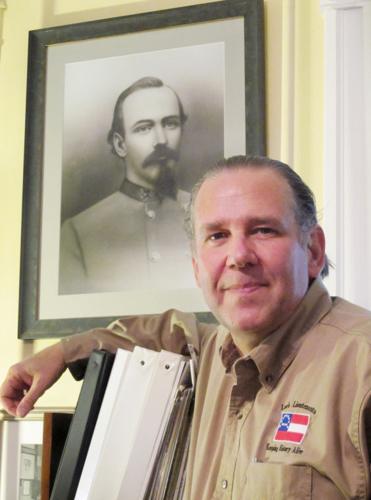 He grew up in Chicago, not particularly aware of Civil War history or the fact some people in Atlanta are still sore about the way Gen. William Tecumseh Sherman treated their fair city (which he learned years later when he lived in Atlanta).

So, David P. Bridges was taken aback when fraternity brothers at the University of Kentucky kept calling him “a damn Yankee from Chicago.”

“All of a sudden I became rather alert to the fact there was something about this North-South thing that was still going on,” Bridges said with a laugh as we talked at his home in Richmond’s West End.

What the frat boys didn’t realize — and Bridges didn’t fully appreciate at the time — was that Bridges did indeed have a strong Civil War connection. And not to the Union side. Years later, Bridges discovered he had 25 Confederate ancestors, one of whom, Maj. James Breathed, has a most remarkable story that Bridges has told in a biography (“Fighting With JEB Stuart”) and now a novel (“The Broken Circle”) of what he likes to call “literary fiction.”

Beyond that, Bridges’ research led to Breathed recently being awarded the rare Confederate Medal of Honor. The medal will be unveiled Friday at 6 p.m. at the Museum of the Confederacy, which will become its permanent home. The unveiling will precede a book talk and signing by Bridges.

“That’s the guy I’ve spent the last 13 years of my life focused on,” Bridges said of Breathed.

In fact, Bridges knew about Breathed long before the rest of his Confederate connections. On a family trip to Maryland when he was 11, Bridges visited Breathed’s grave and then went to Gettysburg, where his father “showed me the cannon marking the place where he fought.”

The moment stayed with Bridges, but it wasn’t until 2000 that he really learned about Breathed. That’s when he came upon a scrapbook that contained newspaper clippings (many from Richmond papers), correspondence and other papers that his great-grandmother had collected about Breathed. By then, family history and writing had emerged as serious interests for Bridges, and he had the details and the documents to launch into a study of Breathed’s life.

Breathed was a scholar, a physician and a Virginian by birth. He served in JEB Stuart’s horse artillery, survived 70 skirmishes and battles, and gained legendary status — and, as it turned out, the basis for being awarded the Confederate Medal of Honor — at the Battle of Spotsylvania Court House in May 1864. Under orders and duress and against long odds, he manned his cannon, had horses shot from under him and still managed to deliver “withering artillery fire” against Union troops “at great personal peril,” according to the citation of the medal, which is awarded by the Sons of Confederate veterans. Over the years, only 57 have been awarded, said Ben Sewell, SCV executive director.

“These medals are more like the modern Medal of Honor in that they are awarded for heroism,” Rawls said.

Bridges said his great-great-uncle was “an exceptional warrior and a courageous leader. And after the battle, because he would have taken the Hippocratic oath, he would administer medicine to men in both blue and gray.”

Bridges, 50, has his own interesting story. Though growing up on Chicago’s North Shore, he yearned to be a farmer of all things — “I was an oddball, I guess you could say” — and attended the University of Kentucky, where he majored in agricultural economics. After a short stint working for Southern States, he headed in a completely different direction: seminary.

He worked as a Presbyterian minister for 25 years, in the pulpit and in pastoral care, before retiring and devoting himself to writing. Toward the end of his church work, he also had developed a somewhat unusual hobby for a member of the clergy: Civil War re-enactment, a passion that came with his research on Breathed. He’s sort of retired from that, too, after a decade of horseback riding, lugging his carbine over his shoulder and sleeping on the ground.

“I hit 50 and decided it’s time for living history,” said Bridges, who now does that sort of work with an educational group called Lee’s Lieutenants. He portrays, of course, Breathed.

His writing has been shaped by studies at places such as the University of Chicago (under famed religious scholar Martin E. Marty), Hollins University and Johns Hopkins University as he has transitioned from writing sermons to nonfiction to novels. He’s about to begin teaching a class at the University of Richmond’s School of Professional & Continuing Studies on the writing of historical fiction. (He’ll serve as well as a part-time chaplain at McGuire Veterans Affairs Medical Center.)

Bridges is not sure where his love of writing comes from. But based on the boxes of papers dating to his elementary school days that he has hauled from one town to the next throughout his adult life, he said with a laugh, “it’s been going on for a long time.”

Bridges at the Museum of the Confederacy

Author David P. Bridges talks about Confederate Maj. James Breathed and signs copies of “Broken Circle,” a historical novel based on the life of Breathed, whose Confederate Medal of Honor will be unveiled. Friday, 6-7:30 p.m., 1201 E. Clay St. Details, (855) 649-1861, or visit www.moc.org

Find out more about Bridges at www.davidpbridges.com

Physical violence, verbal abuse and psychological coercion were used to get the victim to perform manual labor "for 12 long years," prosecutors said.

Richmond’s longtime favorite restaurant Acacia is finally about to reopen at Libbie Mill.

Toadzilla, a giant cane toad found in Australia, may be a record-breaker

Rangers worked quickly to remove the giant toad from the wild because a cane toad of its size will eat "anything it can fit into its mouth."

She asked a Roanoke judge on Monday to recuse himself from presiding over a hearing on protective orders.

A security camera video obtained by police showed the suspect rummaging through the vehicle, authorities said.

VCU student struck and killed by vehicle on campus

Student Mahrokh Khan was hit shortly before 9 a.m. while crossing the intersection of Laurel Street and West Main Street.

David Bridges, a Presbyterian minister turned author, in his Richmond home, under the watchful gaze of his most recent story subject: his great-great uncle, Confederate Major James Breathed, who has been posthumously awarded the rare Confederate Medal of Honor.