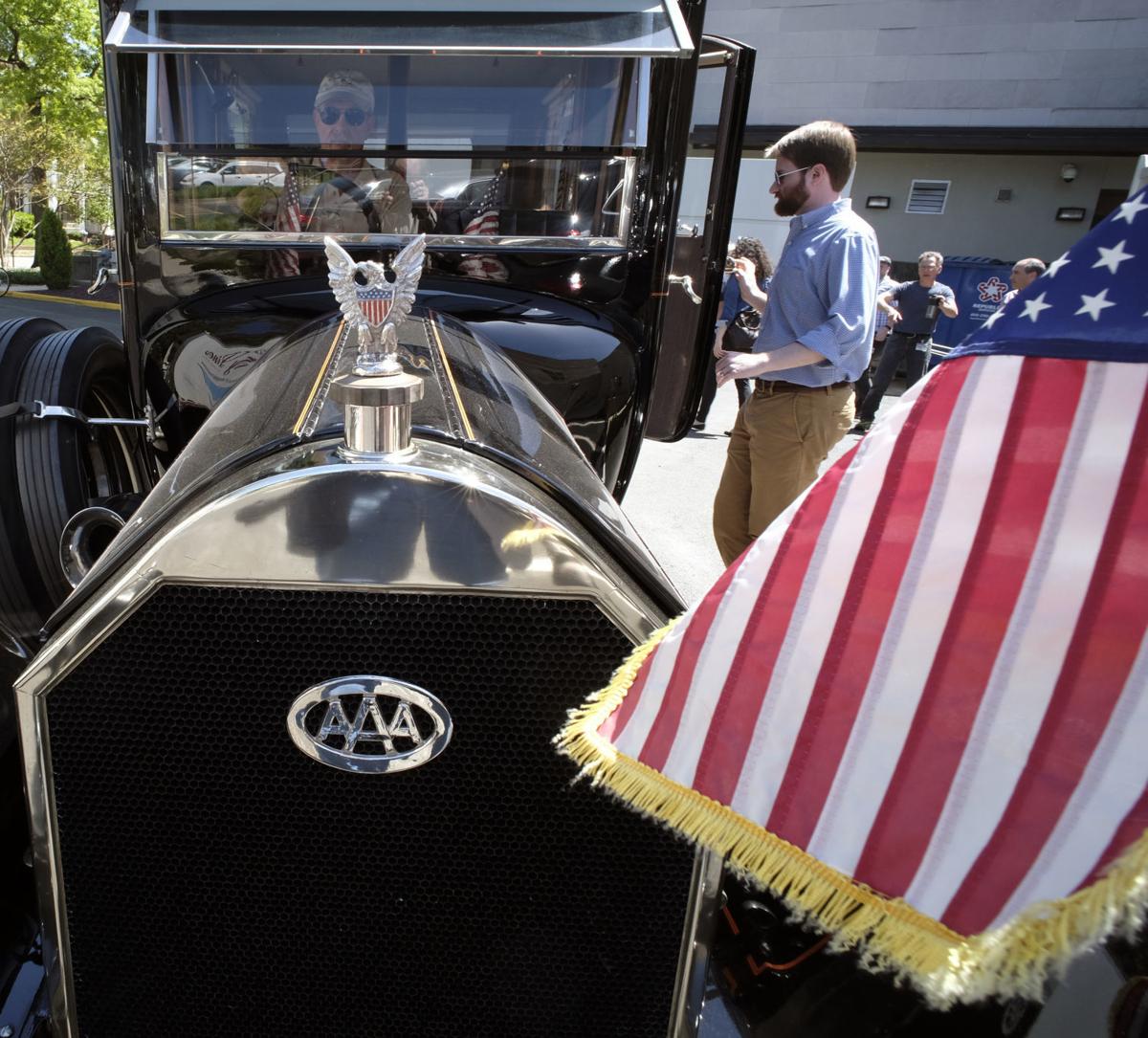 Richard Obenschain sat at the wheel, while Andrew Phillips, curator of the Woodrow Wilson Presidential Library & Museum, prepared to hop in the back of Wilson’s 1919 Pierce-Arrow limousine for a ride in Richmond on Tuesday. 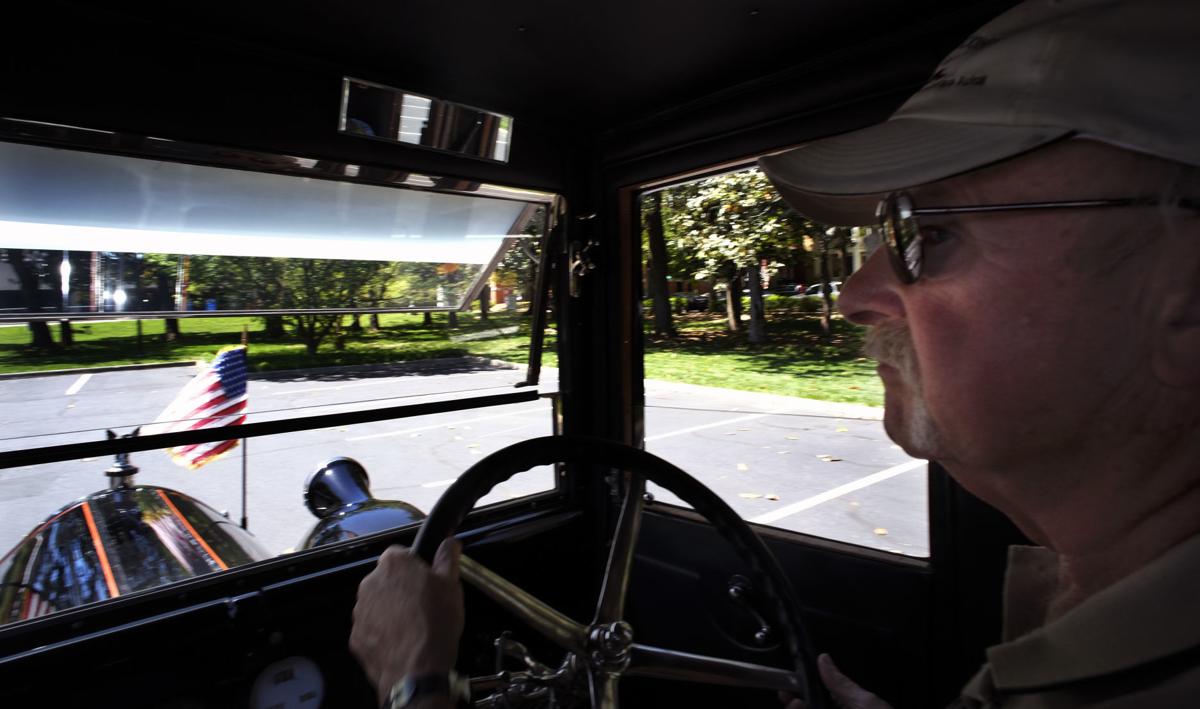 Obenschain drove outside of the Virginia Museum of History & Culture, where the limousine is on display. 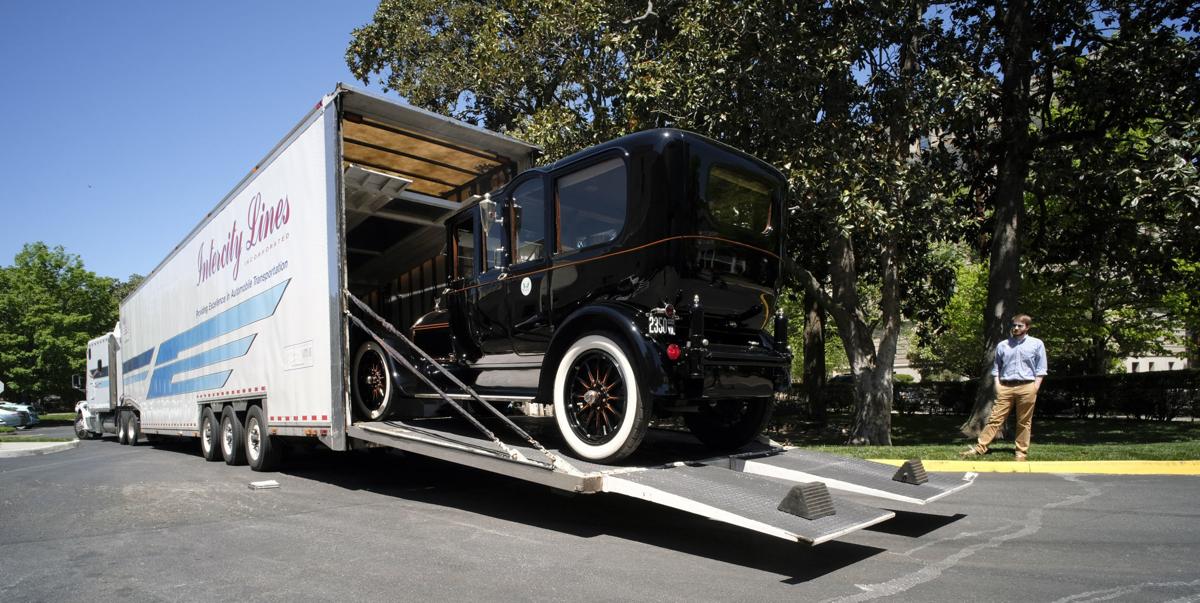 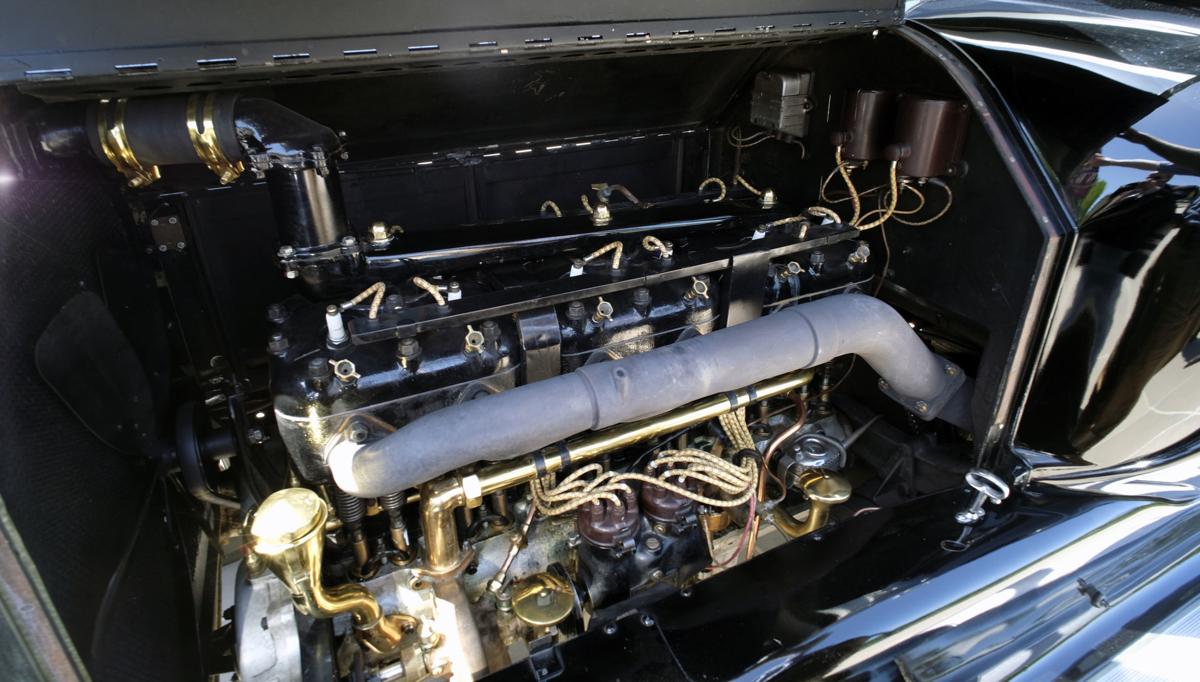 The engine of President Woodrow Wilson's 1919 Pierce-Arrow limousine on display at the Virginia Museum of History & Culture in Richmond, VA Tuesday, May 1, 2018. The car is on loan from the Woodrow Wilson Presidential Library Museum in Staunton for a WWI centenial exhibit. 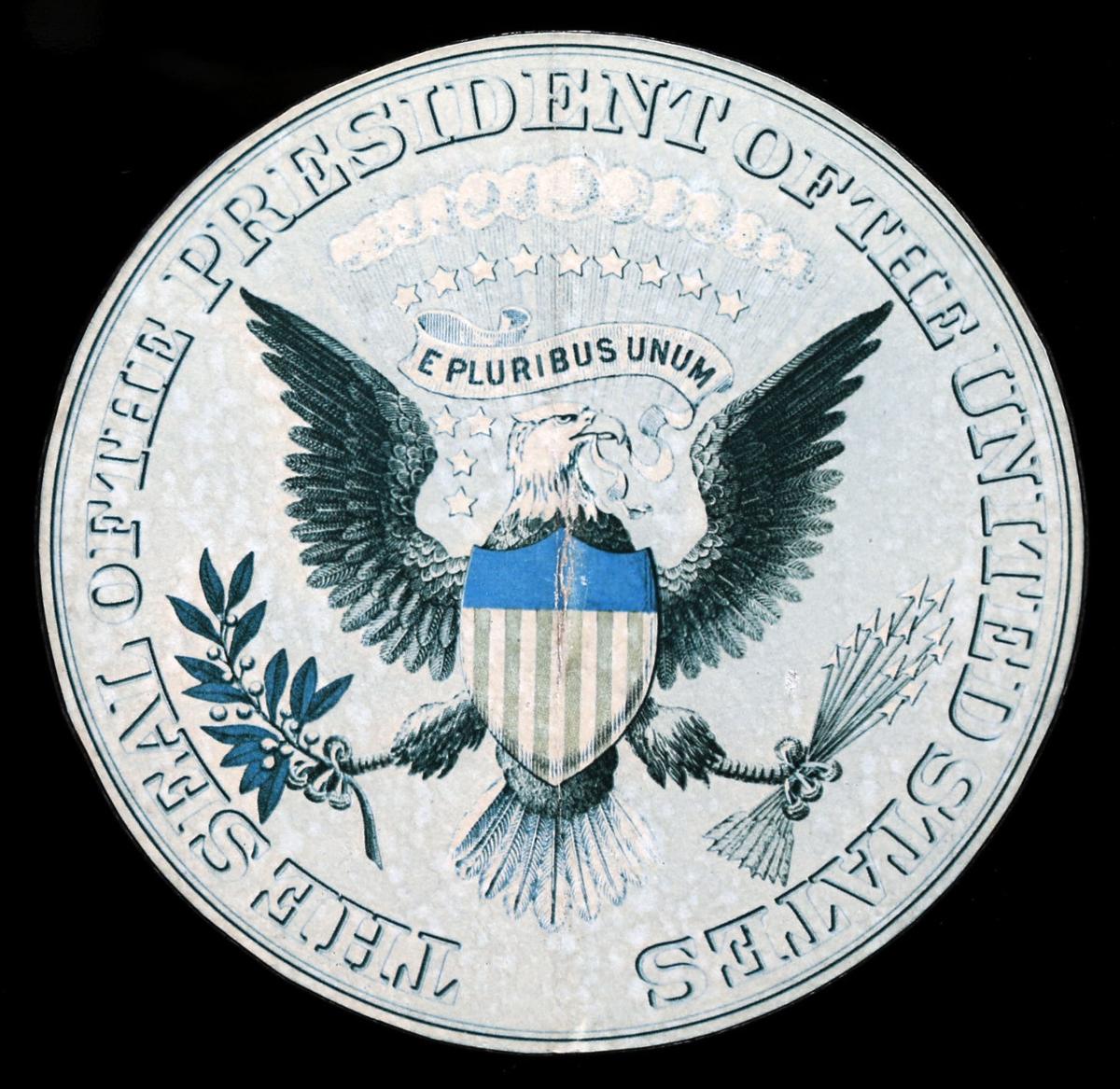 The Presidential Seal on the door of President Woodrow Wilson's 1919 Pierce-Arrow limousine on display at the Virginia Museum of History & Culture in Richmond, VA Tuesday, May 1, 2018. The car is on loan from the Woodrow Wilson Presidential Library Museum in Staunton for a WWI centenial exhibit.

So, there we were, tooling around the Museum District in President Woodrow Wilson’s limousine, gleaming black with wide whitewalls, a 1919 Pierce-Arrow with a pair of American flags waving from the front bumper and a horn that says ahooga very emphatically.

Just another Tuesday afternoon in the neighborhood.

“You stop and think: Woodrow Wilson literally came back from negotiating the end to [World War I], got into this car, which he saw for the first time, and rode from Washington’s Union Station to the White House, and loved it so much that he kept it the rest of his life,” marveled Jamie O. Bosket, president and CEO of the Virginia Museum of History & Culture, my backseat mate. “It’s like a historic house on wheels.”

The Pierce-Arrow Series 51 model arrived at the museum on North Boulevard on Tuesday, on loan for the next month from the Woodrow Wilson Presidential Library & Museum in Staunton. The vehicle will be on display in the museum’s lobby as a complement to the ongoing “WWI Centennial Exhibition” and as part of the museum’s Memorial Day commemoration that will feature an Army band, historical interpreters and other family-friendly activities.

The limo made the trip from Staunton safely enclosed in the back of a trailer. It doesn’t do interstates.

The museum invited photographer Bob Brown and me to take a spin around the block in the 99-year-old limo before it was parked in the lobby, and since we’re always eager to get out of the office, we gratefully accepted. The opportunity also intrigued me since I hadn’t ridden in anything that old since my first car, a very used Ford that cost $190 more than 40 years ago.

The Pierce-Arrow was a lot nicer. There were no holes in the floor, and the radiator didn’t overheat after three blocks.

“It’s a fascinating vehicle, but somewhat of a challenge to drive,” said Richard Obenschain, a member of the committee at the Wilson museum that handles the maintenance of the vehicle and most of the driving. He was our designated driver on Tuesday.

“It’s about like driving a 10-ton truck with very little in the way of brakes and pretty sloppy at steering,” he said with a smile. “The only brakes on the car are on the rear wheels. There are no front brakes, so when you start downhill you better be making some plans that involve stopping at the bottom before you run through a stoplight because you don’t want to be the guy who pulled out into traffic and got Mr. Wilson’s car wrecked.”

The car weighs 3 tons — “The body is cast-aluminum,” said Andrew Phillips, curator of the Wilson museum, “and lots of brass” — and is 16 feet long with a passenger chamber that could seat five with nifty flip-up seats and is separated by partition from the chauffeur. It has six cylinders and four forward speeds in addition to reverse. The steering wheel is on the right, though the car was made in Buffalo, N.Y. — not England — by Pierce-Arrow, a luxury car manufacturer that didn’t make it out of the Great Depression.

The car originally hit 60 mph, but now rarely is tested beyond 40 mph (and Wilson, who may have been more comfortable in the horse-drawn carriages of his youth, always insisted his driver never go faster than 25 mph, Phillips said). Gas mileage? About 10 miles to the gallon.

“This was the top-of-the-line automobile for 1919,” Phillips said of the Series 51 model. “They wanted to make sure the president had the very best.”

The interior of the car, beneath the upholstery, is all wood, and there are pull-down shades on all of the back windows. Outside, there are electrical lanterns between the doors, and the fender-mounted headlights are stylishly deluxe. An electrical intercom system enabled Wilson to communicate with the driver.

There were two buttons on the right armrest of the backseat. One was a buzzer — he would press it once for the driver to turn right, twice for left and three times to stop. The other was for speaking directly to the driver, the sound of the president‘s voice coming through a speaker positioned behind the driver’s ear.

Because of its era, the car was built without seat belts, turn signals or windshield wipers — the windshield did tilt out for ventilation — or even brake lights, though rear lights have been added. There also, of course, was no air conditioning or heat; the Wilson museum has a camel-hair blanket that Wilson carried with him for cold rides on chilly days.

The limo was leased to the government, which presented it to Wilson upon his return from negotiating the Treaty of Versailles in June 1919. Though he also had access to a Rolls-Royce, Wilson preferred the Pierce-Arrow — but always as a passenger. Phillips said there is no evidence Wilson ever drove it or even had a driver’s license.

After the president suffered a debilitating stroke, his daily excursions in the Pierce-Arrow brought a glimmer of joy to his life. Aides would drive him to watch Washington Senators baseball games, parking the car in foul territory so the president could watch from there since he couldn’t navigate the steps into the grandstand. A player with a glove would be posted in front of the vehicle in case an errant ball threatened the car, Phillips said.

Wilson’s love for the limo was well-known, and when he left office friends from Princeton University — where he attended as a student and later served as president — bought the car for $3,000 and presented it to him. Following Wilson’s death in 1924, his widow, Edith Bolling Galt Wilson, gave the car to the Woodrow Wilson Birthplace Foundation. It turned out to be the first item donated to what would become the presidential library.

The foundation had little money to dedicate to the car’s upkeep, so the limo never got the engine work it needed until after an incident in the 1950s when Edith Wilson came for a visit and was offered a ride.

“It died with her in it at the bottom of a hill,” Phillips said. “That was embarrassing. It had died on us before but never with someone that important in it.”

Since then, the limo has undergone extensive restoration and ongoing upkeep, and is taken out periodically for drives, regularly participating in parades and other events.

The ride? The thing might drive like a battleship, but for passengers in the back it was quite comfortable — and undoubtedly historical.

The limo will be on display daily through June 4 and will be part of the Memorial Day ceremony at 1 p.m. on May 28 at the museum.

'We are going to turbocharge this': Virginia scrambles to solve its problems with gaps in COVID vaccination data

Virginia’s vaccine data dashboard shows about 42% of its nearly 960,000 doses have been administered. State officials say that number is incom…

Doctors, state officials and advocates in Virginia, which was home to the capital of the Confederacy and the birthplace of slavery in the U.S.…

Richard Obenschain sat at the wheel, while Andrew Phillips, curator of the Woodrow Wilson Presidential Library & Museum, prepared to hop in the back of Wilson’s 1919 Pierce-Arrow limousine for a ride in Richmond on Tuesday.

Obenschain drove outside of the Virginia Museum of History & Culture, where the limousine is on display.

The engine of President Woodrow Wilson's 1919 Pierce-Arrow limousine on display at the Virginia Museum of History & Culture in Richmond, VA Tuesday, May 1, 2018. The car is on loan from the Woodrow Wilson Presidential Library Museum in Staunton for a WWI centenial exhibit.

The Presidential Seal on the door of President Woodrow Wilson's 1919 Pierce-Arrow limousine on display at the Virginia Museum of History & Culture in Richmond, VA Tuesday, May 1, 2018. The car is on loan from the Woodrow Wilson Presidential Library Museum in Staunton for a WWI centenial exhibit.