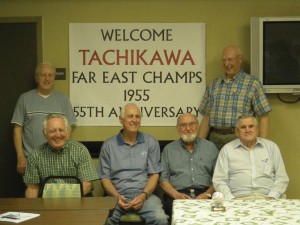 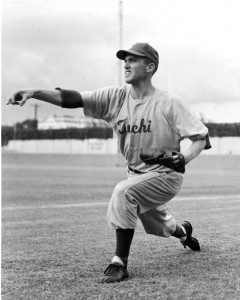 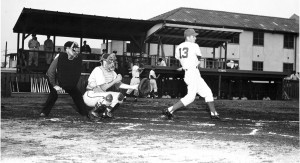 By the time Dan Porte was ready to graduate from high school in Baltimore in 1953, he had had a storied athletic career. He lettered in several sports. He was a killer pitcher. He was named first team all-state on a team in which future baseball hall-of-famer Al Kaline only managed to reach the second team. He had offers of full athletic scholarships from the University of Maryland, the University of Virginia, George Washington and the University of Georgia.

But on the day he returned home from a trip to Georgia and announced to his mother that he was heading south to play for the Bulldogs, she told him, “No, you’re not, son.”

Then she handed him his draft notice.

In the waning months of the Korean War, the Army had plans for Porte – the infantry. But Porte had designs of his own. If college baseball was out, so was foxhole excavation.

Porte joined the Air Force instead, and the nation’s youngest branch of the armed forces would take him on a path to capture some of the sports glory the service had selectively denied him.

Porte was trained as an airborne radar and radio technician and in 1954 he was posted to Tachikawa Air Base, near Tokyo, Japan, where he soon met “the greatest bunch of guys I ever played with.”

Many of the bases had baseball teams. Tachikawa was no exception, and Porte tried out as soon as he was able in March 1955. However, Porte was not alone. One hundred fifty tried out for just 26 positions on the Red Devils’ squad, but eight of those were already claimed by players returning from the 1954 team. Porte made the cut as a utility outfielder and relief pitcher.

Even so, he was going to have to work to get much playing time. The team was loaded with professional ballplayers: Joe Dugan of the St. Louis Cardinals organization, Keith Kelley of the Brooklyn Dodgers, Randy Feldt with the Chicago White Sox, Don Keller with the New York Yankees, and George Robinson, who had played in the Appala-chian League.

Early that April, the team boarded a flight to Clark Air Base in the Philippines for spring training.

“It was miserable rain the year it began,” Porte said of the weather in Japan at the time. “That’s why we went to the Philippines for spring training, because the weather was so bad in Japan. We had to get out there – we were working in the gym and couldn’t get out on the field. In the Philippines, we could practice early morning, and late afternoon. The team shaped up that way.”

The weather affected the beginning of their season – their first two games were rained out and had to be made up at the end of the season.

The Red Devils lost the first game they actually played, but then won 10 straight.

They had a solid grip on first place in the Air Force Northern Japan League until summer came.

“We fell apart in June or July,” Porte said. “I guess the other teams got a little bit better and we didn’t improve enough to handle it, that’s all. Either that, or our pitching staff fell apart.”

By mid-August, Tachikawa was tied with Yokota for first place in the Northern Japan league.

Both teams had two makeup games with Shiroi.

The Red Devils won both of their games, while Yokota won only won. The Red Devils, with a 24-8 record, had claimed the championship, a game ahead of its nearest competitor.

They advanced to the Far East Air Force championship at nearby Johnson Air Base.

For that tournament, they had to pare down their roster to 17 men. Again, Porte made the cut.

Tachikawa won the FEAF tournament, despite the fact that they were nearly upset by a competitor.

Finally, they played in the Air Force World-wide championship at Donald-son Air Force Base in South Carolina. Their success ran out.

After a one win and two losses, they returned to their home base at Tachikawa.

Porte played again next year, but the Red Devils were no more. The Tachikawa team had been combined with a team from a nearby base.

The new team likewise made it to the Air Force worldwide tournament, and again fell short of a world title, but the 1956 team didn’t hold the magic that inspired one team member, Tom Pickard, to call Porte about organizing a reunion in 1990 – 35 years after their first championship.

Last spring, the survivors, families, and fans celebrated the team’s 55th anniversary in the Hampton Inn in Glen Allen.

“I loved playing with these guys,” Porte said. “It must have been due to the fact that we were all in the Air Force together – the camaraderie, playing on the field and growing together, as men, really.”

Rodney Brown of Richmond played for the Tachikawa championsihp team in 1955.