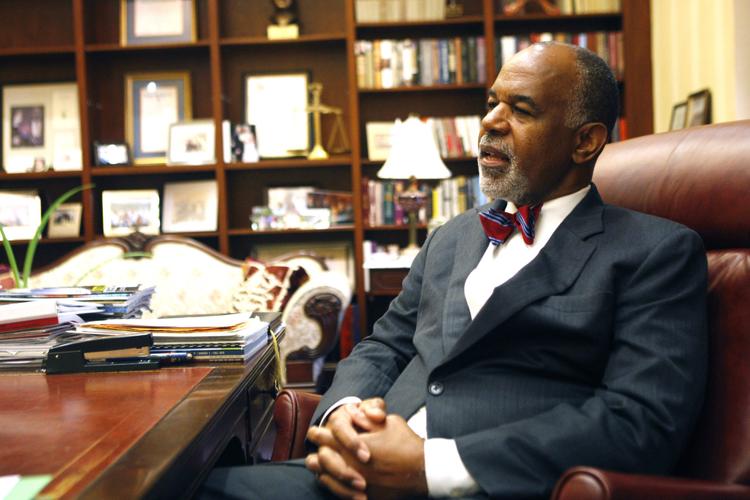 Chief Judge Roger L. Gregory in his office at the 4th U.S. Circuit Court of Appeals. 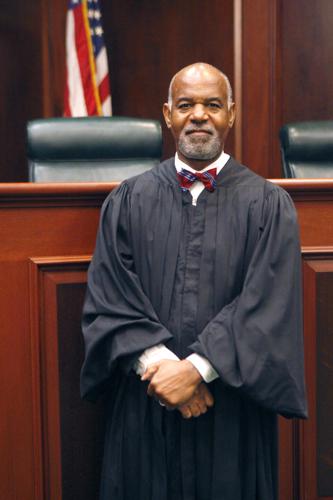 The new chief judge of the Richmond-based 4th U.S. Circuit Court of Appeals is a part-time playwright and actor whose favorite line is as a character in the stage version of “To Kill A Mockingbird.”

The courthouse at 1100 E. Main St. is the second-oldest continuously operating federal courthouse in the country and the same building where Jefferson Davis had his offices while he was president of the Confederate States of America.

Gregory’s new office on the building’s fourth floor features an expansive view of the state Capitol, the former capitol of the Confederacy.

“I’ve always loved history,” Gregory said in an interview Thursday. Growing up in Petersburg, he said he never thought he would become a lawyer, much less a judge.

“Like most kids, I loved baseball. ... I would have loved to have been a baseball player,” he said. Other youthful aspirations included firefighter, police officer and diplomat.

The 4th Circuit, one of 12 U.S. circuit courts of appeal, has 15 active judges and two senior judges. Except for the handful of cases accepted by the U.S. Supreme Court, it is the court of last resort in Virginia, West Virginia, Maryland, North Carolina and South Carolina.

As the active judge with the most seniority and under age 65, Gregory officially became the new chief judge on Saturday, with the seven-year term of Chief Judge William B. Traxler Jr. of South Carolina expiring.

Gregory joined the court in 2000 as an appointee of President Bill Clinton while Congress was not in session. He was renominated in 2001 by President George W. Bush and confirmed by the Senate.

After law school in Michigan and a brief stint as a lawyer there, Gregory went to work for the Richmond law firm of Hunton & Williams before he and future Virginia Gov. L. Douglas Wilder opened Wilder & Gregory in 1982.

The law firm is known today as Harrell & Chambliss, still at Seventh and Main streets. Gregory said he stays in touch with Wilder, whom he described as “a wonderful, wonderful friend.”

Gregory said he likes his job as a judge so well that he hesitates to call anything about it “difficult.”

But, he said, “When you have to make judgments about very serious things, that’s always very tough. It takes a lot of time. It’s very serious.”

“As President Truman said, ‘The difficulty about making a decision, wasn’t the decision. The difficulty was not knowing all that time that you’re right,’” Gregory said. “We have some incredible cases.”

Some of the issues can have great impact on the country, and all of them are important to the parties involved, he said.

“I think that certainly is a challenge to get it right and be fair and to do justice,” Gregory said.

He said he will have to keep his “day job” as a judge in addition to taking over the administrative and other duties as the court’s chief, which include overseeing court operations; allocating work among the judges; and playing a key role in setting policy for the 4th Circuit as well as serving on the judicial conference that sets national court policy and is chaired by Chief Justice John G. Roberts of the U.S. Supreme Court.

Gregory said he could have declined the role of chief but said he felt he needed to accept.

“As trying and humbling and daunting as the task may be, I think it’s important that I stand up and take my turn and do my very best, and I look forward to it,” he said.

He added, “It’s a lot of work, because I’m not just the chief judge of this court of appeals, but I’m the chief administrator of the whole 4th Circuit. That’s all the federal judges in the five states. That’s about 160 federal judges.

“Every day, I’m finding more and more duties that have already started and plus my day job continues — working on opinions and hearing cases just like everybody else,” he said. “God willing, I’d like to serve the seven years.”

Asked if he sees himself as a groundbreaker and role model, Gregory said, “My philosophy about being chief is, I’m a first among equals ... to lead with integrity, transparency and fairness.”

“I’ll let others put that mantle on me in terms of ‘role model.’ I would like to think that I would live my life as such that people might ... at least find inspiration,” he said.

“Particularly young people who can aspire to things. ... They might see themselves someplace else — whether it’s law, science or education or whatever it might be,” he said.

Gregory has three daughters and two granddaughters. His first wife, Carla L. Gregory, who died in 2009, revived an old interest in the theater when he turned 50. He said she prompted him to go to Barksdale Theatre to try out for a part. He did, and he won it.

“I’d always loved theater,” he said. He had dabbled a bit in the drama club while at Petersburg High School.

He has acted for the Virginia Repertory Theatre, twice, among other things, in productions of “To Kill a Mockingbird,” a play based on Harper Lee’s novel about a white, small-town Southern lawyer, Atticus Finch, who defends a black man charged with raping a white woman.

“I was Rev. Sykes, who delivered my favorite line,” Gregory said. As Finch walks out of the court, Sykes says to the lawyer’s daughter, “‘Stand up, Scout, your father’s passing,’” Gregory said.

In the play, the Sykes character has more of a role than he did in the movie version of the novel, Gregory said.

Gregory said he also writes and directs a play each year as the artistic director of the drama ministry at Good Shepherd Baptist Church in Petersburg. “I love it. Theater is fun, a lot of fun,” he said. He also enjoys reading and sailing.

No ceremony was held to mark Gregory’s transition as chief judge.

“It happens not with a bang but a whimper,” he said. “It’s a great court, wonderful colleagues. With their help, I’ll endeavor to do my very best. It’s very humbling, and I thank God to have the opportunity to serve.”

Gregory said the courts “belong to the people,” and he wants to expand educational opportunities, especially for young people and on Constitution Day, Sept. 17.

“I really want to open it up,” he said. “The more we can educate, expose and encourage the principles of the Constitution and justice and liberty — we help all of ourselves.”

Embattled rector at University of Richmond steps down

Last year, Queally was at the center of debate regarding the names of two campus buildings and their ties to racism.

Chesterfield County fire officials announced the off-duty death on Saturday of one of their veteran firefighters but said they have not yet confirmed whether she was killed during a training exercise in North Carolina.

An 18- and 14-year-old were pronounced dead by authorities who found them lying on railroad tracks in Hopewell Friday night with several gunshot wounds, police said Saturday.

Here's why Broad Street is being painted that bright red color

A wave of retirements is rearranging Virginia's public finance agencies, taking decades of institutional knowledge from one of the most stable…

Molly Ringwald, an actor, author and singer perhaps best known for her roles in 1980s films like “The Breakfast Club” and “Sixteen Candles,” s…

Just keep your returns: Stores weigh paying you not to bring back unwanted items

Instead of piling returned merchandise onto a growing inventory heap, stores are considering just handing customers their money back and letting them keep the stuff they don't want.

Chief Judge Roger L. Gregory in his office at the 4th U.S. Circuit Court of Appeals. 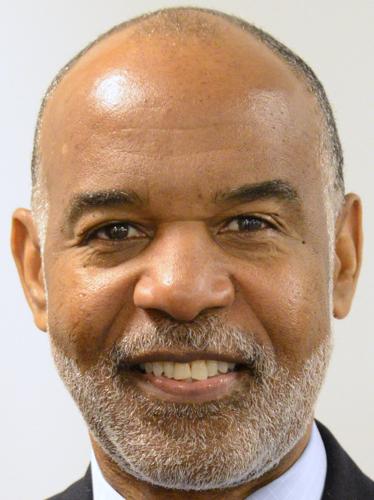